Some firms specialize in pitch-perfect historic renovations; others focus on modern architecture. It's rare to find a firm that can segue gracefully between the two, like Dutton Architects in Los Angeles.

The firm (a member of the Remodelista Architect/Designer Directory) recently completed a complete renovation and substantial addition to a 1924 Spanish Revival adobe house. Over the years, the home had gone through several ad-hoc additions, so the architects went back to the original volume in front and created two new wings on either side to make it a courtyard house. In back, the architects added a clean-lined pool house. It is a credit to their skill that the newly expanded residence is as true to the historic design and materials as the guest quarters are to modernist architecture. "I loved working with and against the original structure," says principal John Dutton. 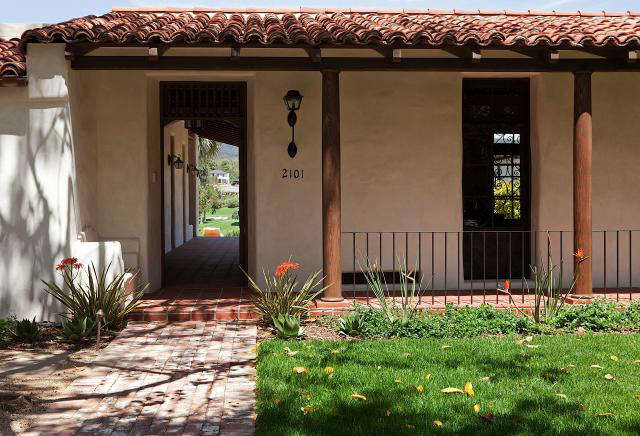 Above: Through his handsome Spanish Revival-inspired homes, architect John Byers helped define Southern California architecture; the Zimmer House has been named a historic landmark by the city of Santa Monica. The structure is notable for its adobe walls, which are two feet thick. In addition to restoring the walls and their coat of lime plaster, Dutton Architects rebuilt the roof with reclaimed roof tiles and replaced the Douglas fir columns. 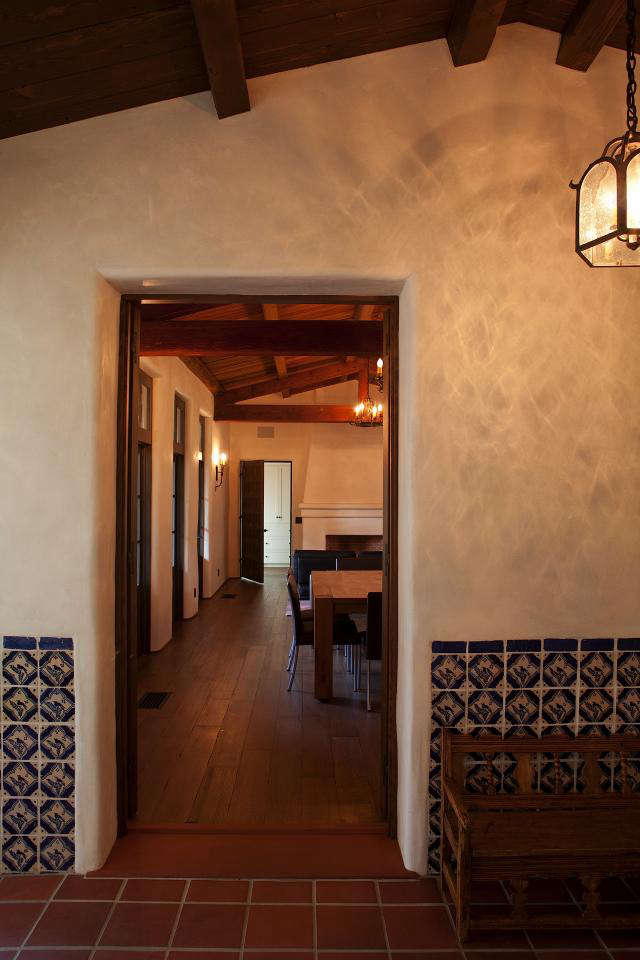 Above: To the right of the entryway, which features original tilework, is the living and dining area. The pendant light is the Alegre from Steven Handelman Studios in Santa Barbara. 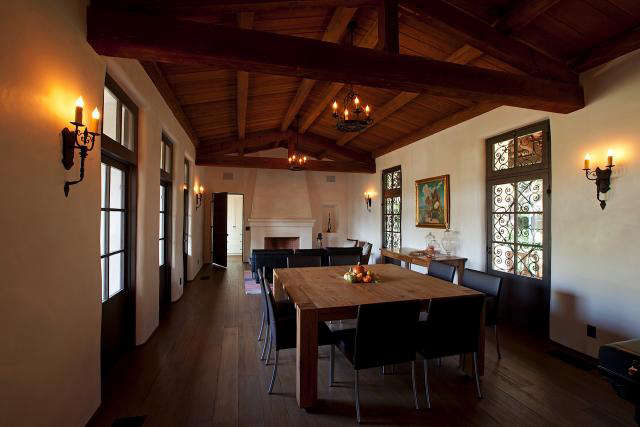 Above: In the dining area, a heavy wood table is paired with the slim-lined Jason Chairs by Walter Knoll. The sconces are hand-crafted antique reproductions by Ray Ferra in La Brea; the chandeliers are from Steven Handleman Studios. 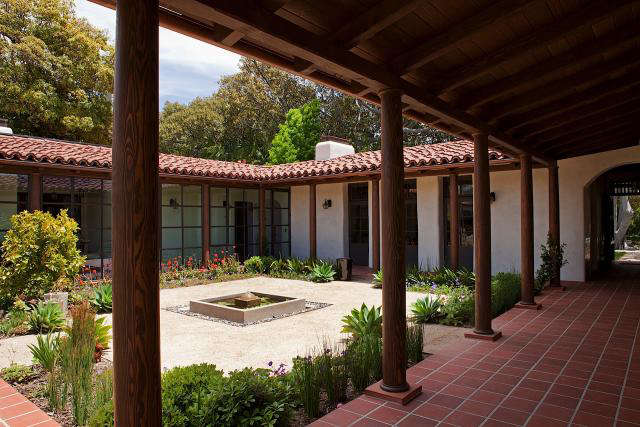 Above: The firm extended the house back, adding a wing with a covered walkway on either side. The architects had to excavate and remove two floors to get to the original terracotta flooring, restoring it with custom 10-inch-square Terra Bella tiles from Mission Tile West. 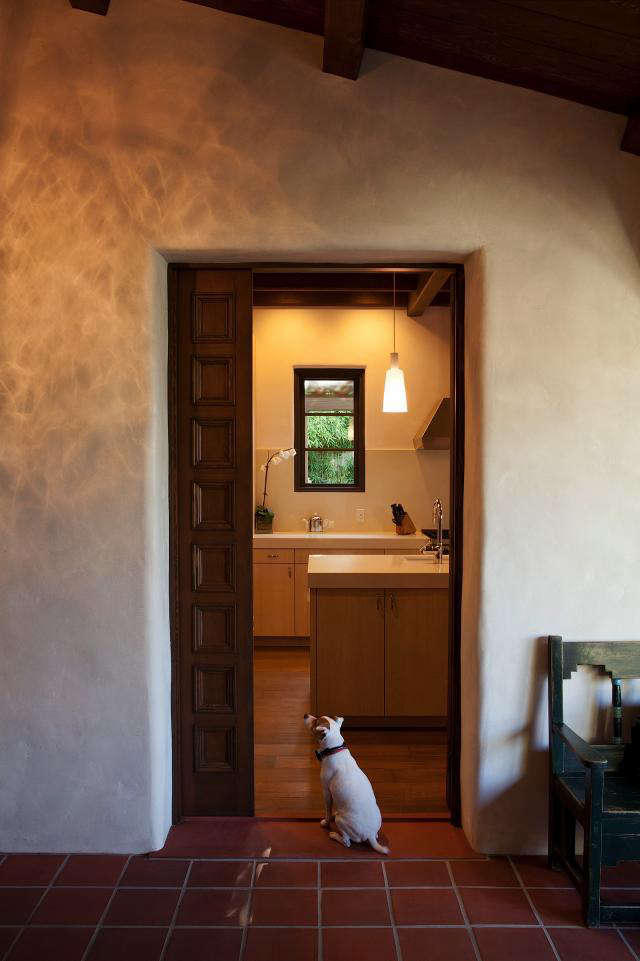 Above: The family's Jack Russell terrier sits on a terracotta door sill, custom made by Mission Tile West. The bench is an antique from the Owings Gallery in Santa Fe. 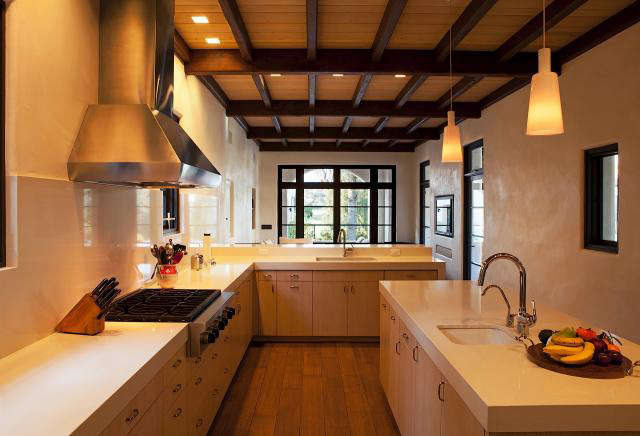 Above: The entire kitchen wing is new, but the architects continued with the adobe construction and exposed beam ceilings of the original home. The Caesarstone countertops are three inches thick: "They're extra-chunky to match the thickness of the adobe," says Dutton. "We wanted a modern kitchen, but not one that was too sleek—it had to have a real materiality." The cabinet fronts are bleached quarter-sawn white oak; the flooring is wide-plank American oak. The kitchen island pendants are Jill Pendants by Tango Lighting. 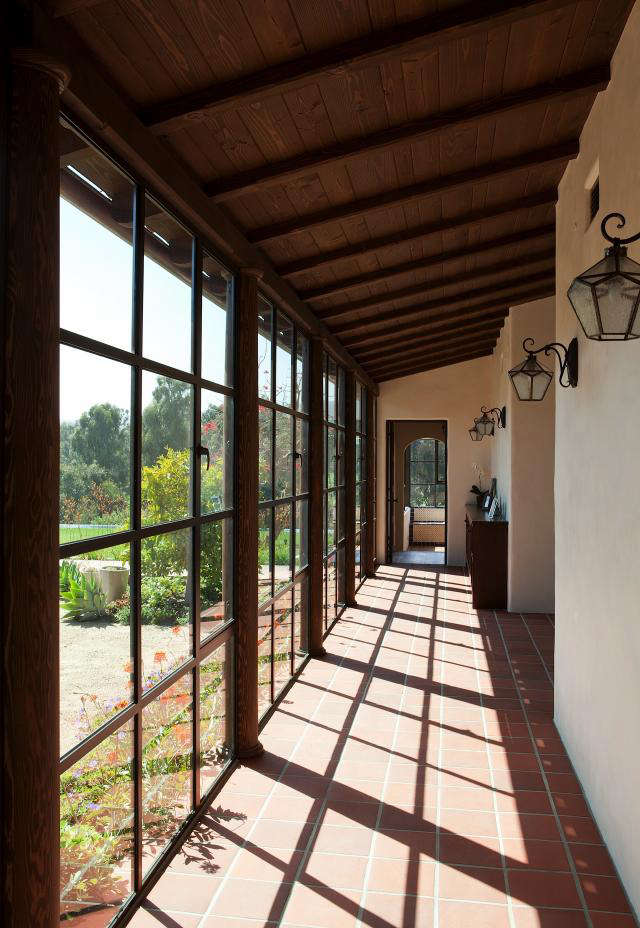 Above: The opposite wing contains the bedrooms, with a walkway that is enclosed in glass. "Originally, my client wanted to walk outside to get to all of the spaces, but then he got married and had a child, so they decided they needed a little more protection from the elements," says Dutton. The steel windows are from Hope's; the wall sconces are from Steven Handleman Studios. Throughout the house, all ceilings and trim is Douglas fir, stained with Cabot's Semi-Solid Cordovan Brown Stain. 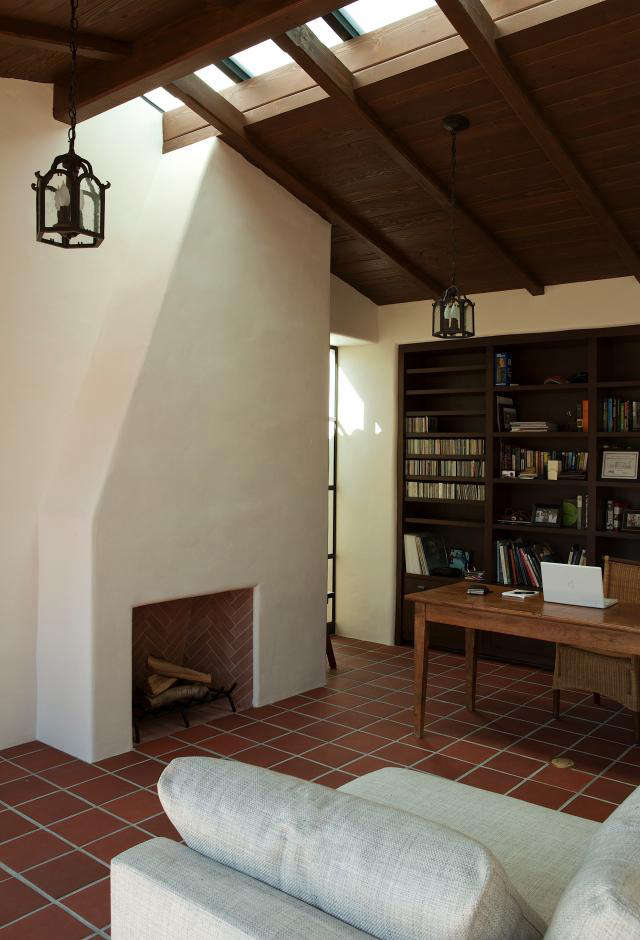 Above: The bedroom wing is also a new addition. In the study, a wood-beamed ceiling, terracotta floor, and fireplace with traditional herringbone pattern of bricks ground it in the past. Note how the skylight has been carefully incorporated so it appears to be a renovation of an original structure. The pendants are the Alegre from Steven Handleman Studios. 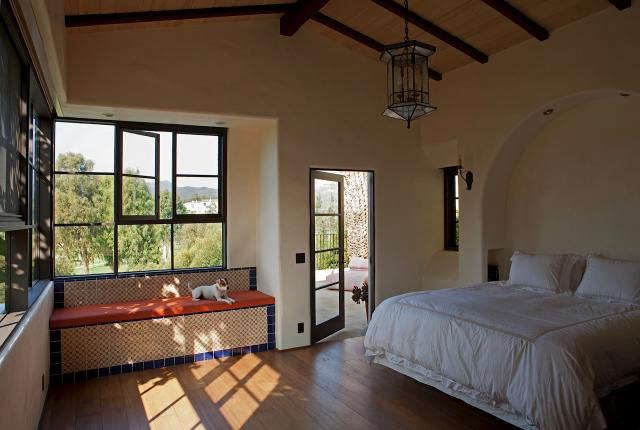 Above: The master bedroom has a soft arch over the bed and a built-in bench (tiled in hand-painted Talavera Tiles from Mission Tile West). The chandelier is the Hallstone from Steven Handleman Studios. 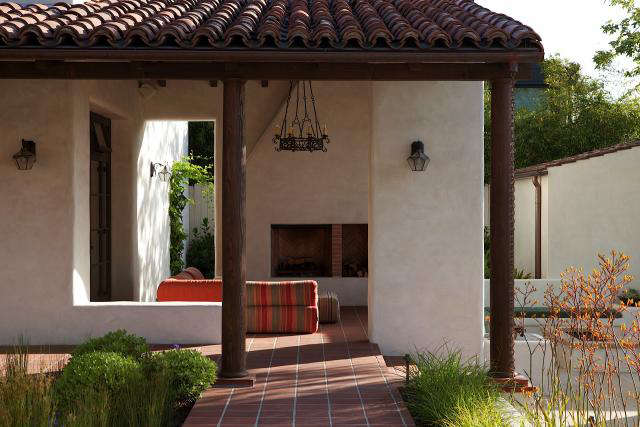 Above: Off of the kitchen, there is a covered patio with a fireplace. The sofa is from Roche Bobois and the chandelier is the Bizet from Steven Handleman Studios. To the right, the property transitions from the past to current day with a contemporary firepit; the guesthouse is just visible beyond. 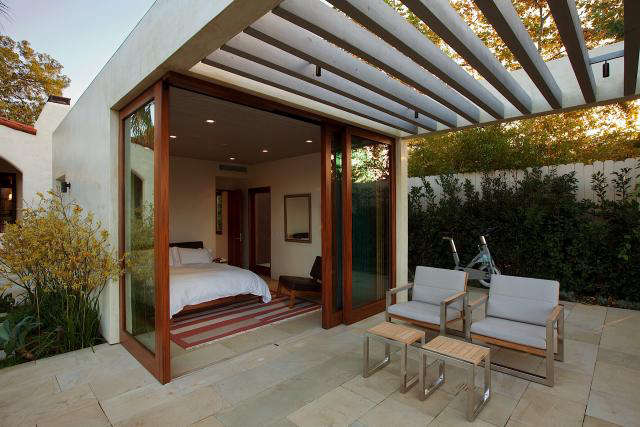 Above: The guesthouse still has echoes of the historic structure. "I wanted to keep the same materials throughout the site, but I wanted the details and design to get progressively more modern," says Dutton. The lines are cleaner and the corners are sharper, but there are flat terracotta tiles on the roof and the exterior has a stucco finish. 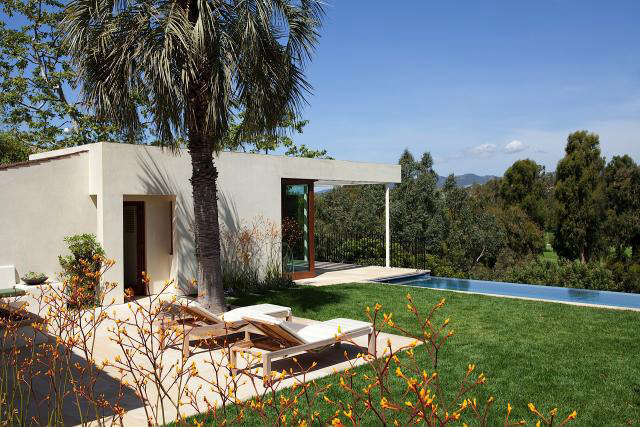 Above: The best of both worlds: Running along the back of the property, a pool with an infinity edge keeps the focus on the views to the Santa Monica Mountains.

N.B. To see the home's floor plan, go to the Dutton Architects website, click on Selected Projects, and and then go to La Mesa Residence; the floor plan is the last image in the gallery.