A savvy, design-loving couple set out on a mission to increase the feeling of space and light in the 600-square-foot ground floor of their narrow, contemporary mews house in Stoke Newington, London. After spotting the work of London-based interior designer Charles Mellersh on Remodelista, the couple, a teacher and a TV executive, enlisted him to reimagine their space. Like a magician, Mellersh makes it all look easy. His technique include a highly honed attention to detail combined with a skillful application of textures and colors; come take the tour and see what he did. 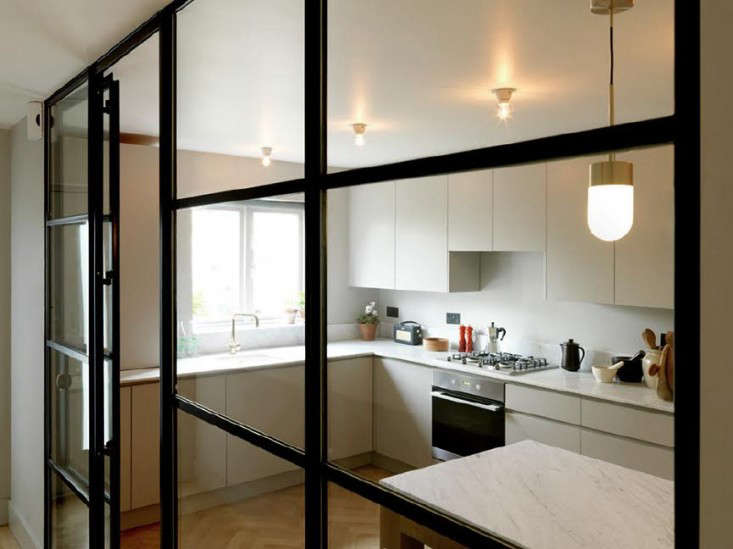 Above: The first step was to replace an existing solid partition wall that separated the kitchen from the entrance hall with a steel-frame glazing system, manufactured by Crittal. The glazed wall distributes light into the hallway and increases the sense of open space. “The new kitchen space feels huge in comparison to what it was before and all without increasing the actual footprint,” Mellersh says. 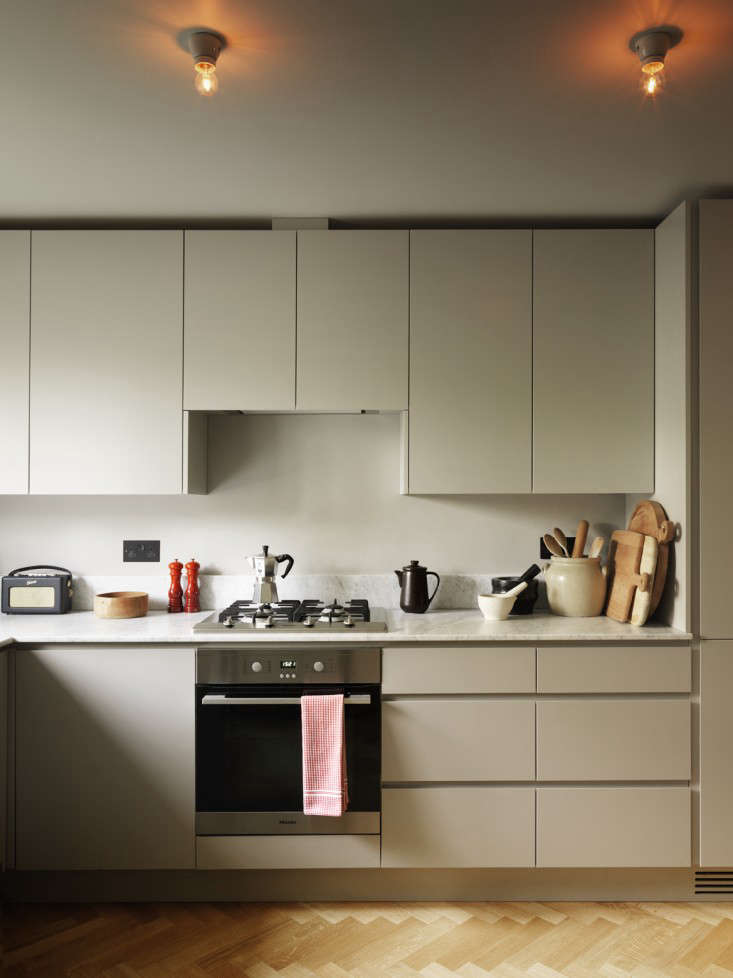 Above: The kitchen cabinets were custom designed by Mellersh and manufactured locally using a mixture of Tulip wood faces and MDF units, spray-painted Purbeck Stone by Farrow & Ball. “The low-sheen finish of the paint creates a beautiful, warm feel,” Mellersh says. “We needed to maximize the feeling of space, so we employed a ‘wraparound’ color scheme–a neat trick where the units, walls, and skirting boards are painted the same color. This unifies the disparate elements and provides an illusion of space, in contrast to the previous kitchen, where a hodgepodge of clashing materials, tones, and textures made the small space feel chaotic and oppressive.” 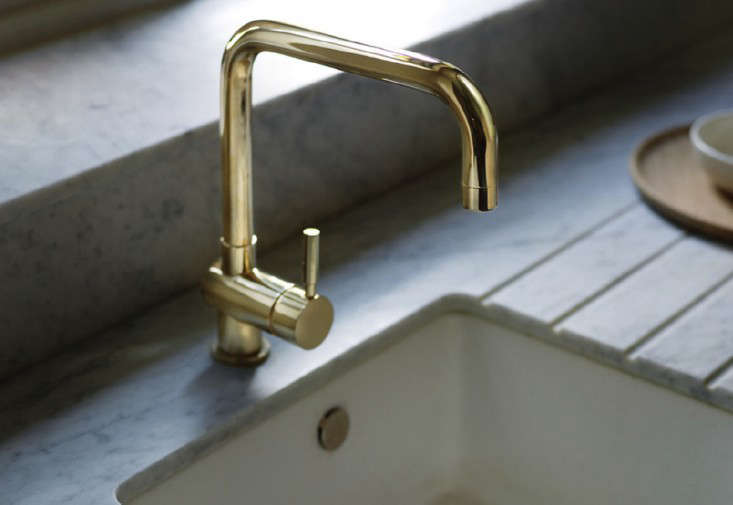 Above: The custom-plated gold tap adds warmth to an otherwise muted palette of color and materials. 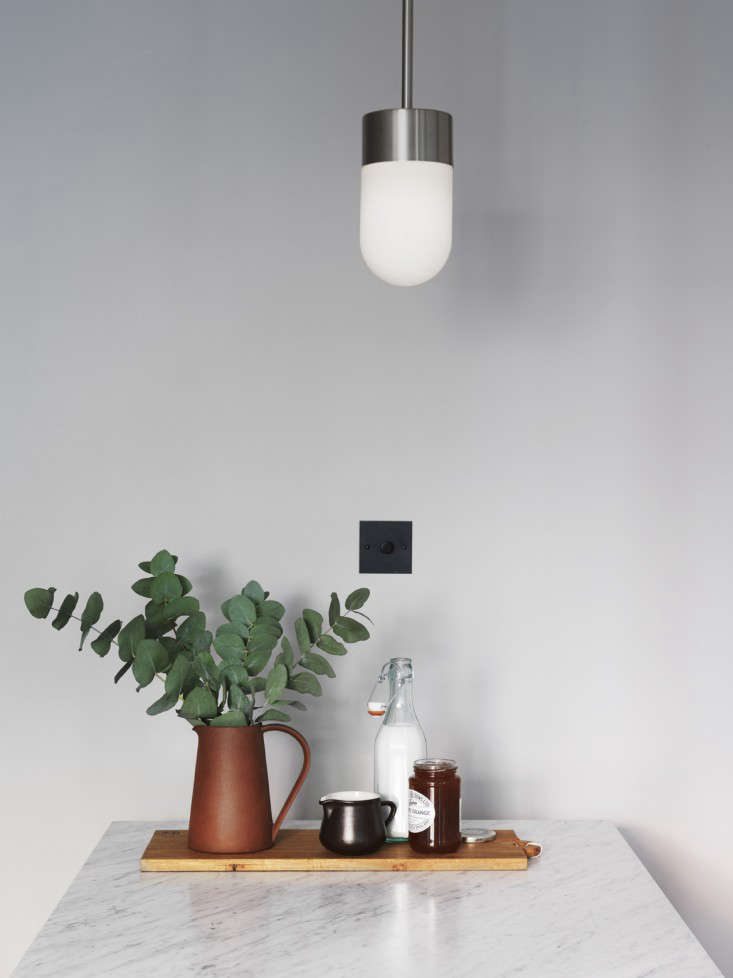 Above: A Vox Pendant by Rubn hangs above the oak and honed Carrara marble table that Mellersh custom designed for the small kitchen. The Pitcher on the table is by Another Country, a housewares company founded by Paul de Zwart, a colleague of Mellersh’s from their Wallpaper days. 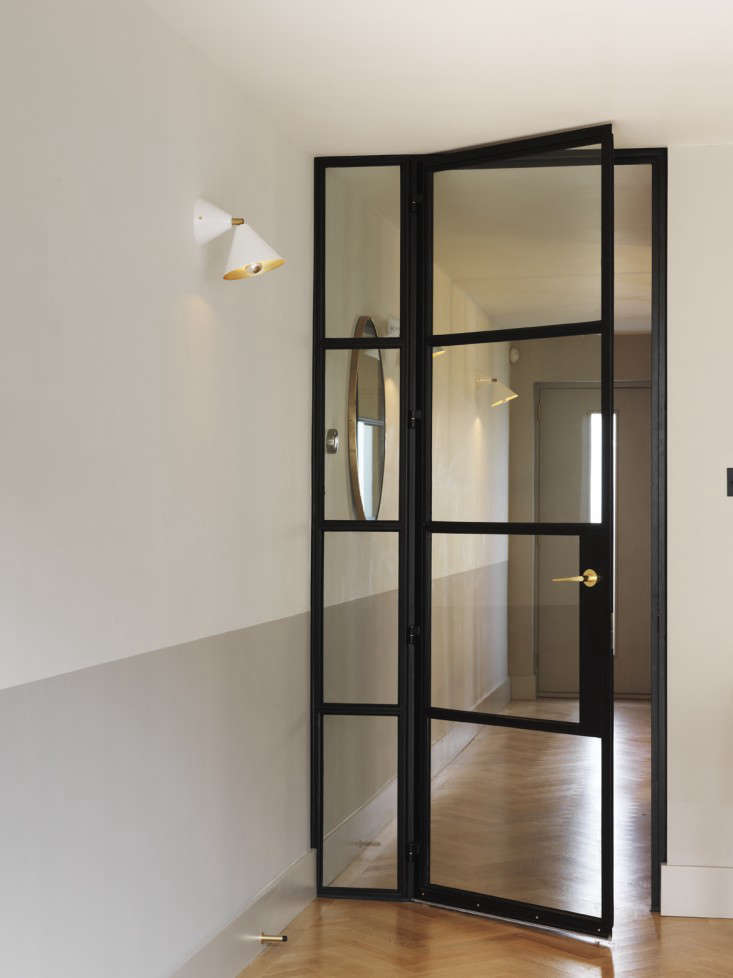 Above: Mellersh replaced the existing solid door between the hallway and the living room with a floor-to-ceiling metal and glass screen and a door that is hinged off a glass side pane. “The Crittal door and side screen that connects the hall with the living room was a breakthrough idea in opening up the space while maintaining the integrity required by the building regulations,” Mellersh says. “From a design point of view it changed the relationship between two adjacent areas by promoting a continuity of light flow within the ground floor level, which previously had felt very oppressive and tunnel-like.” A series of Cone Wall Lamps in white from Atelier Areti continue from the hallway into the living room. 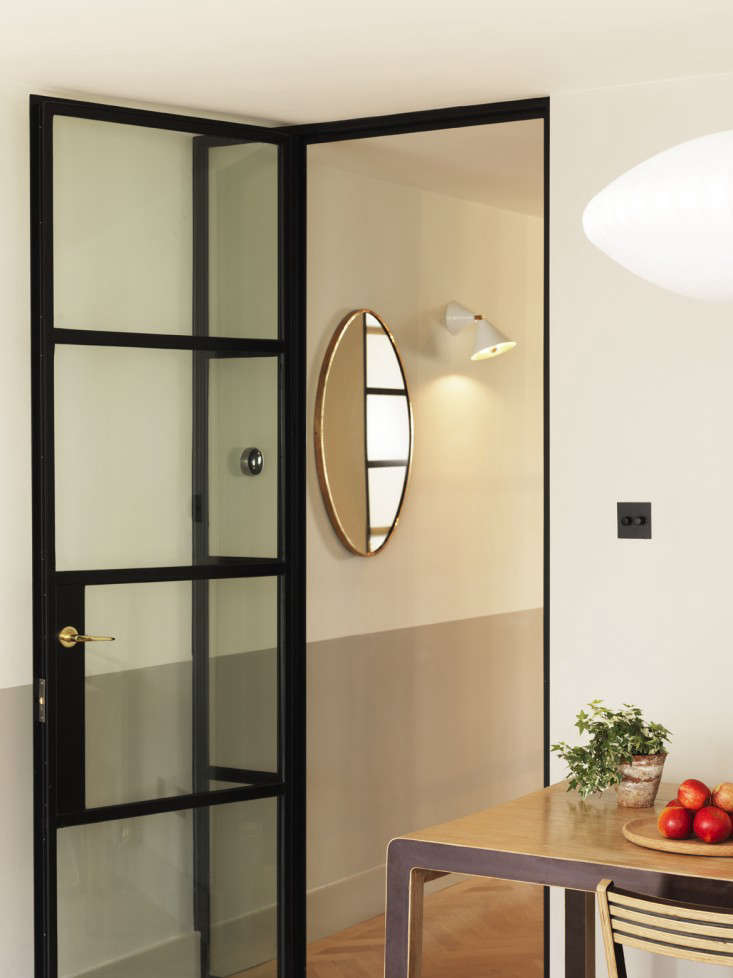 Above: “The two-tone paint effect from the hallway into the living room adds dynamism to an otherwise static environment,” Mellersh says. “This was a simple idea to bring some energy and movement to the space while drawing people toward the living area from the front door.” The vintage 1950s Italian mirror reflects light from the kitchen and was sourced from 52 Meters. 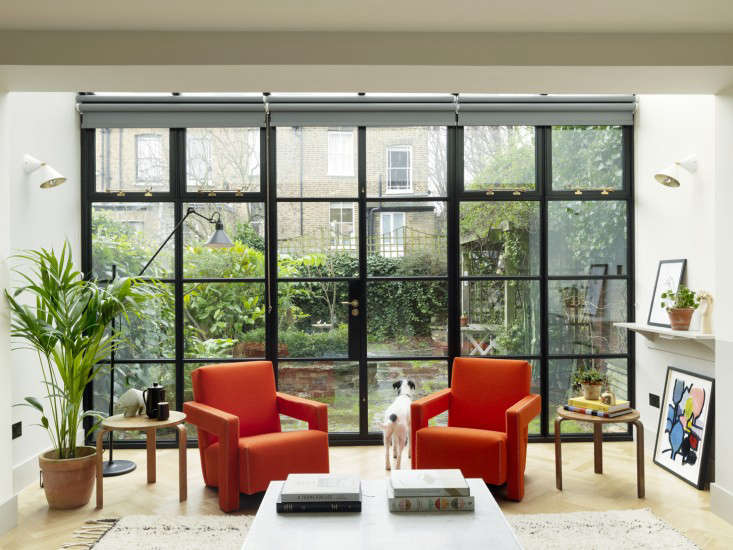 Above: The living room looks out onto historic homes in the neighborhood. To maintain continuity throughout the ground floor, Mellersh replaced the existing PVC conservatory, which “literally creaked in the wind,” with the same Crittal framing system he used in the kitchen and hallway. “The instant continuity between the various spaces we gained was further amplified by using the same flooring in all the rooms,” Mellersh says. “One of my rules on any project is to invest in a really great floor. It provides an anchor to the scheme and a strong layer of materiality that sets the tone throughout.” The flooring used in this project is a system of solid oak parquet blocks laid in a herringbone pattern and finished with a matte lacquer. 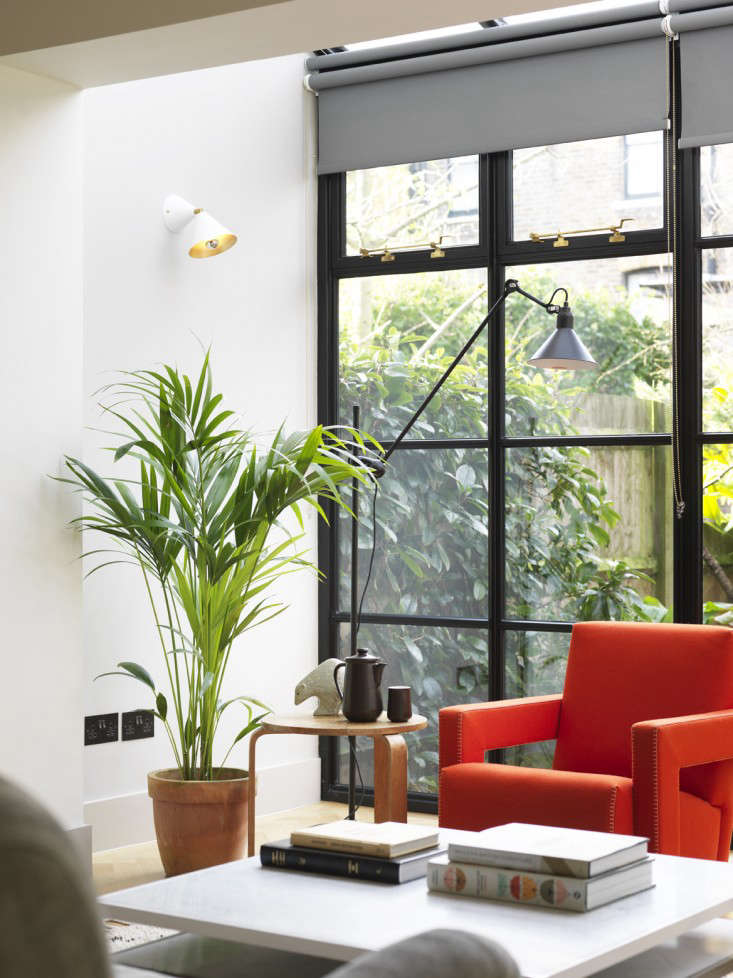 Above: “The furniture plays to the modernist lines of the contemporary architecture,” Mellersh says. “The red Utrecht Chairs are by Cassina. The marble- and metal-framed Tati coffee table is by Asplund. The vintage Berber rug is by Larusi, who is hands down the best source in Europe for such rugs. And the somewhat industrial-looking floor lamp is by Lampe Gras.” 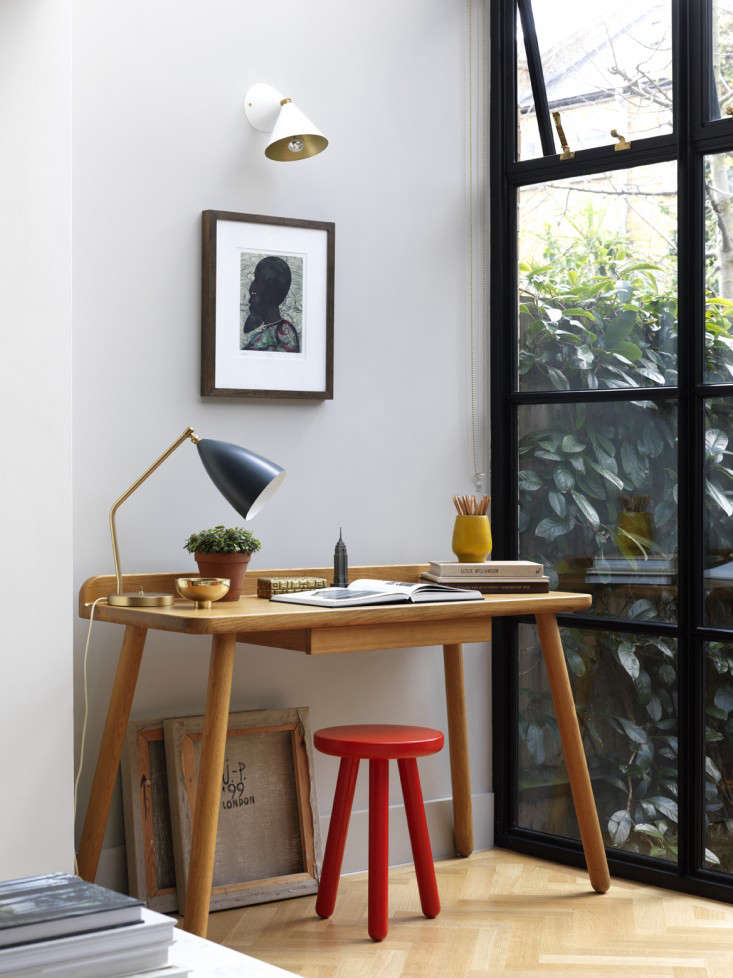 Above: The space has been designed for flexibility. The Desk One Table by Another Country moves positions, depending on how the room is being used. 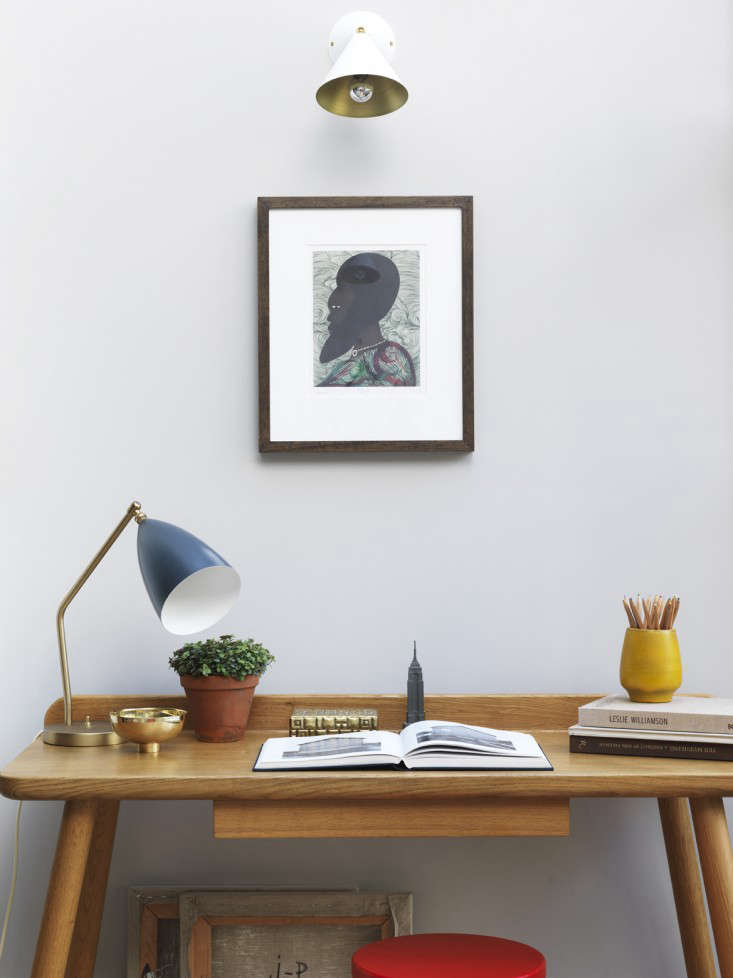 Above: The desk is accessorized with a Gubi Grasshopper Task Light from Another Country. 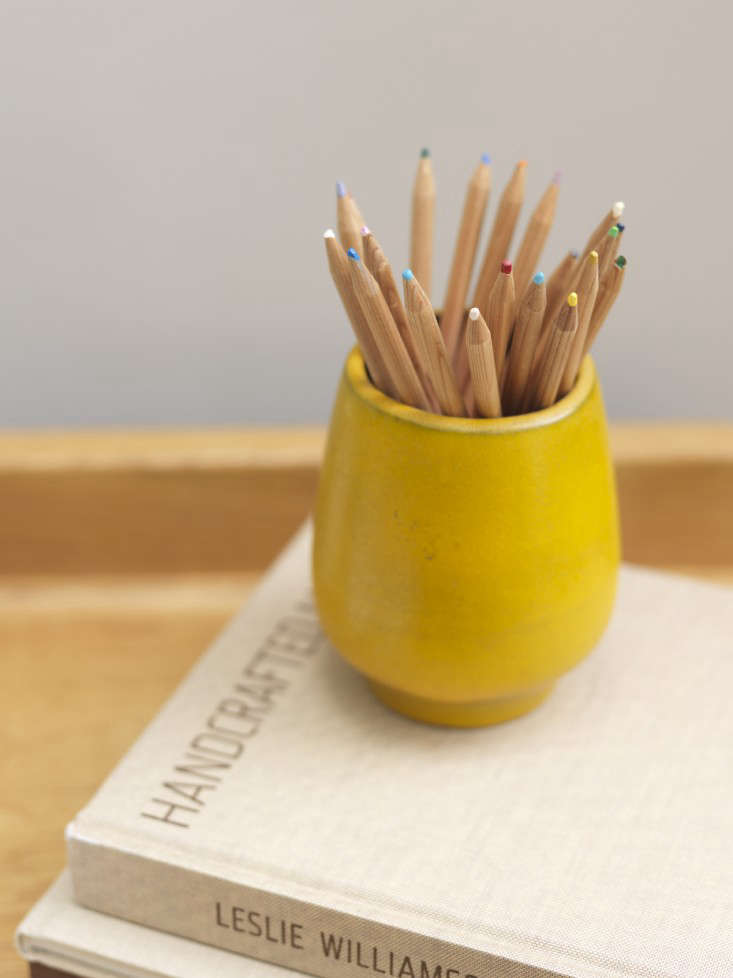 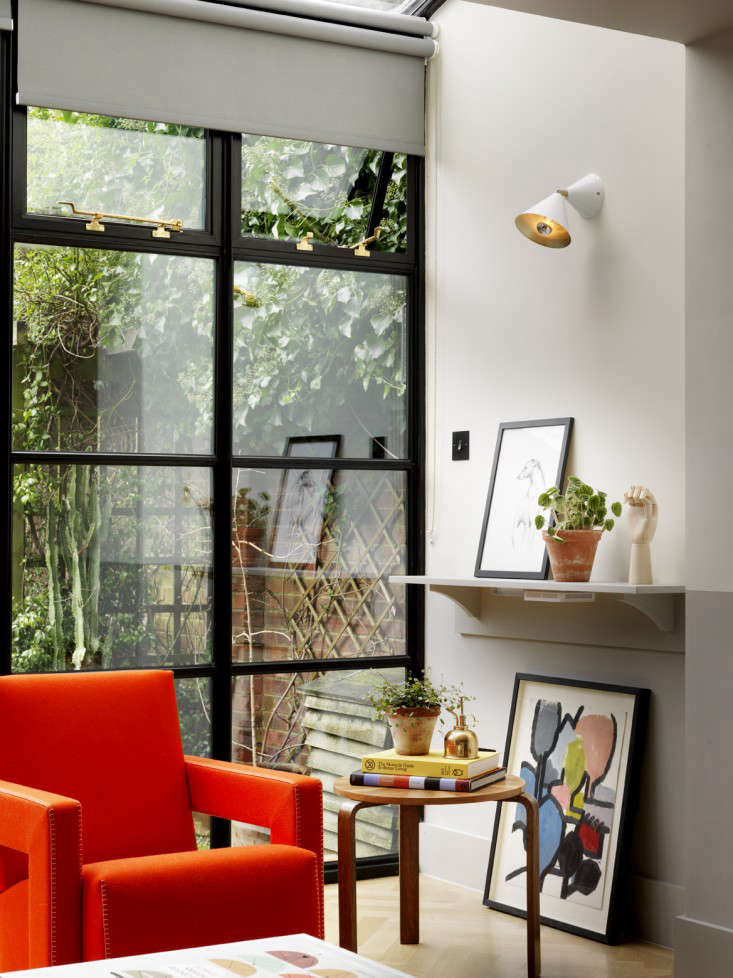 Above: On the opposite wall, Mellersh built a shelf to hide the Wi-Fi router that attaches underneath as well as various cables. 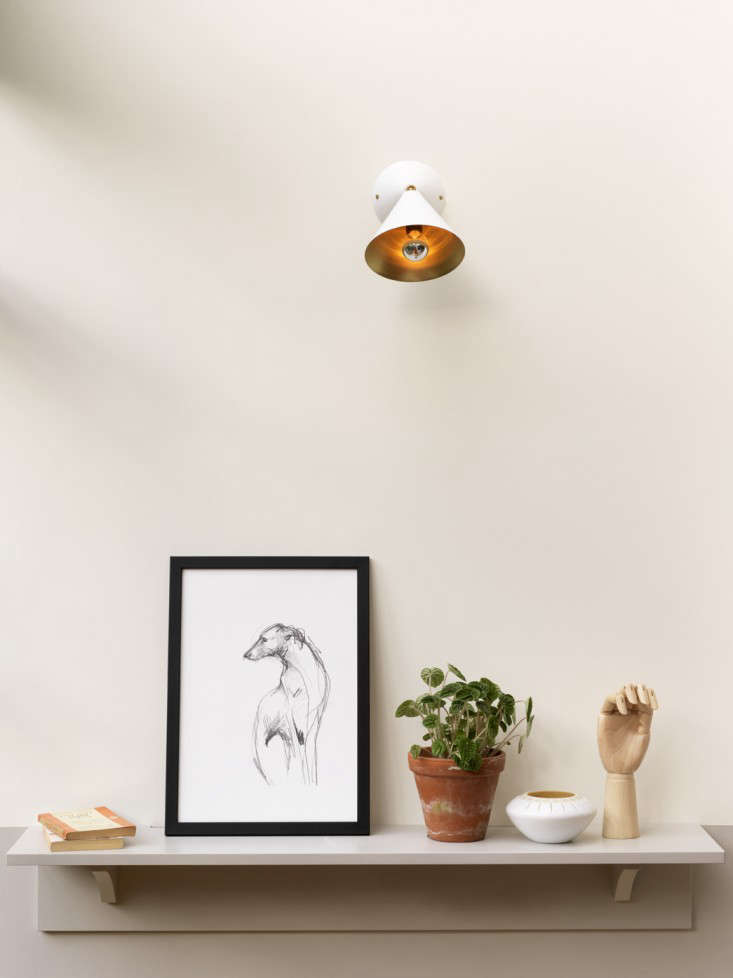 Above: “The shelf also provides a useful area at waist height for placing keys, pictures, and novels,” Mellersh says. 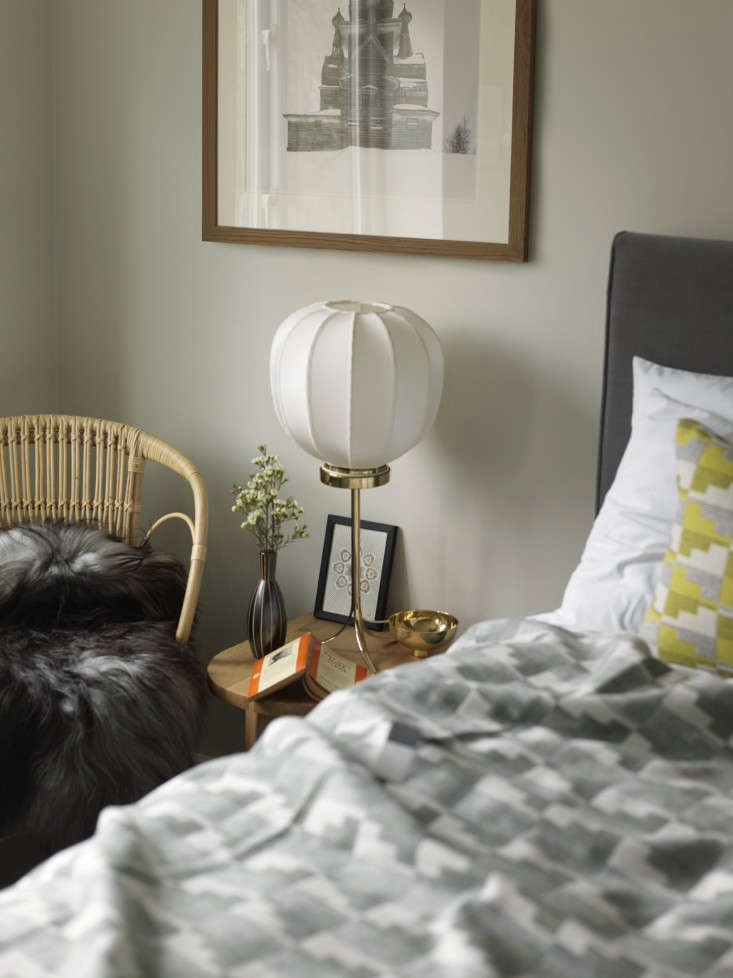 Above: In the bedroom, Mellersh mixed robust natural materials including brass, sheepskin, and wicker to add warmth and texture. The blankets and cushions by Eleanor Pritchard play on the modernist feel. 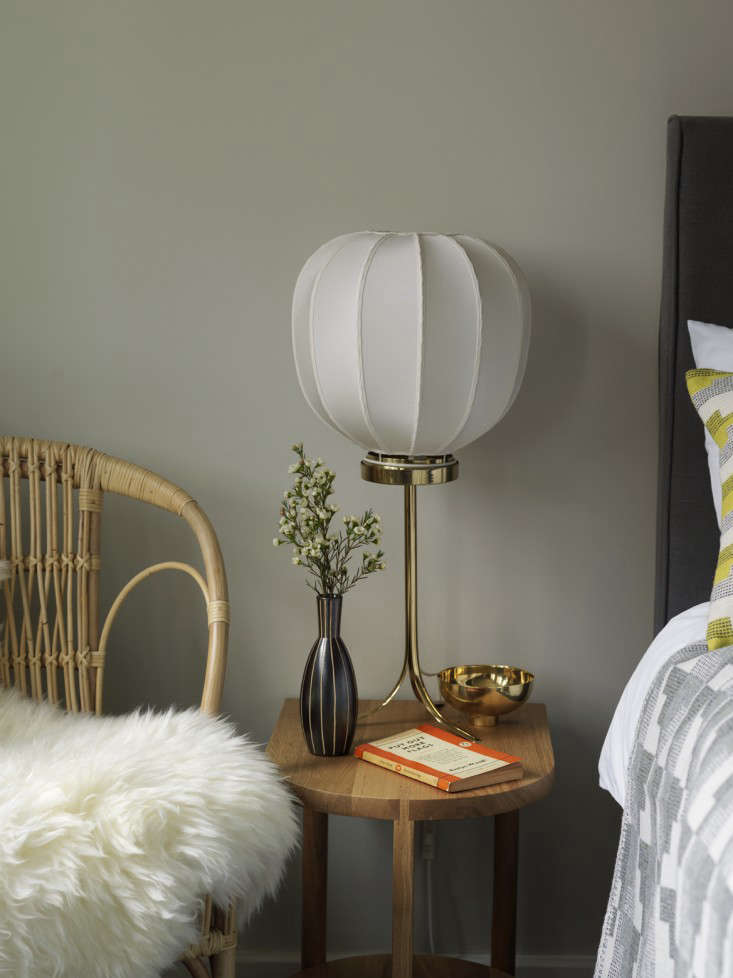 Above: Lamp 2349 by Josef Frank, designed in 1940 for Svenkst Tenn and available from Twenty Twenty One, sits on the Hardy Table by Simon Kampfer for Zilio A&C. 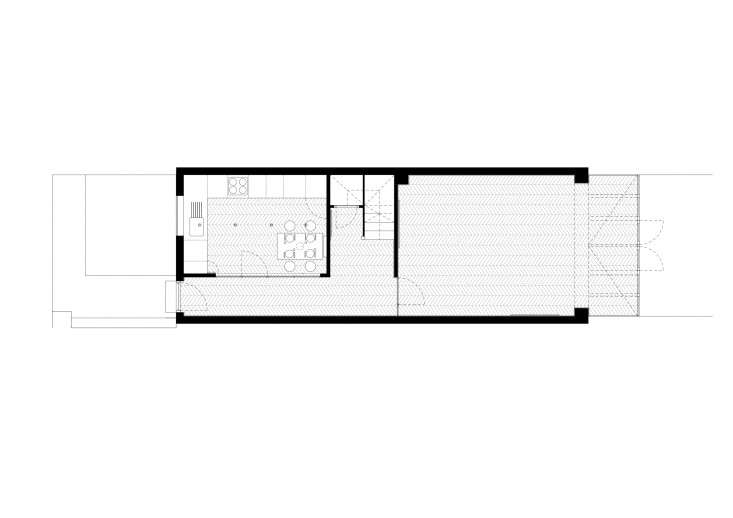 Above: A plan of the ground floor shows the flow of space from the entry door on the left through to the living room on the right. 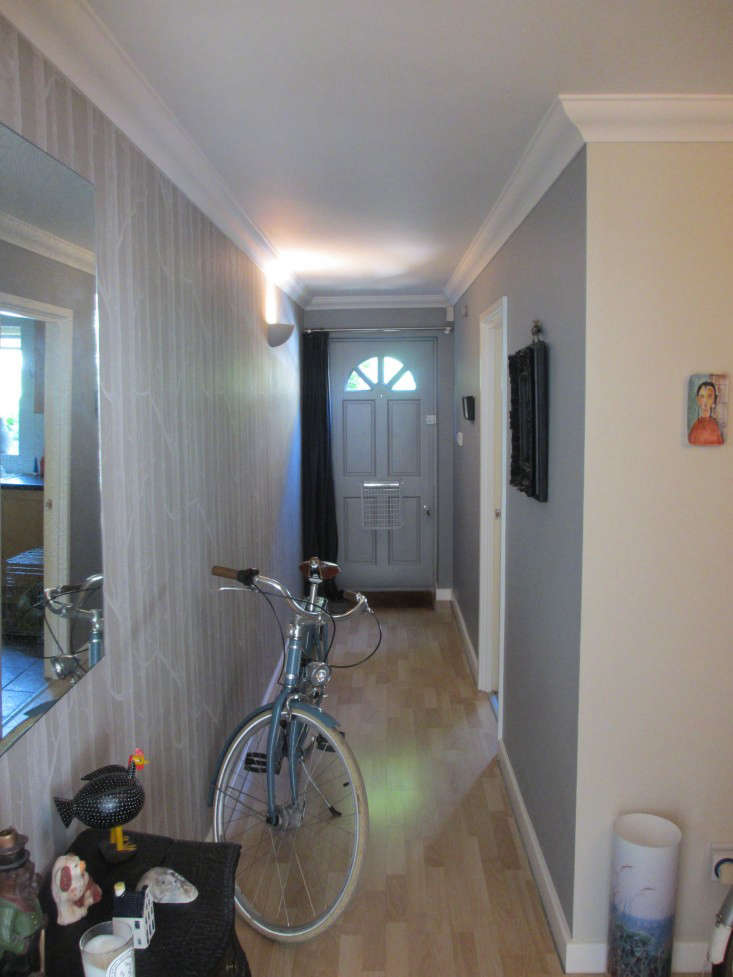 Above: A view down the entry hall with the kitchen through the opening on the right. All “Before” photographs by Charles Mellersh. 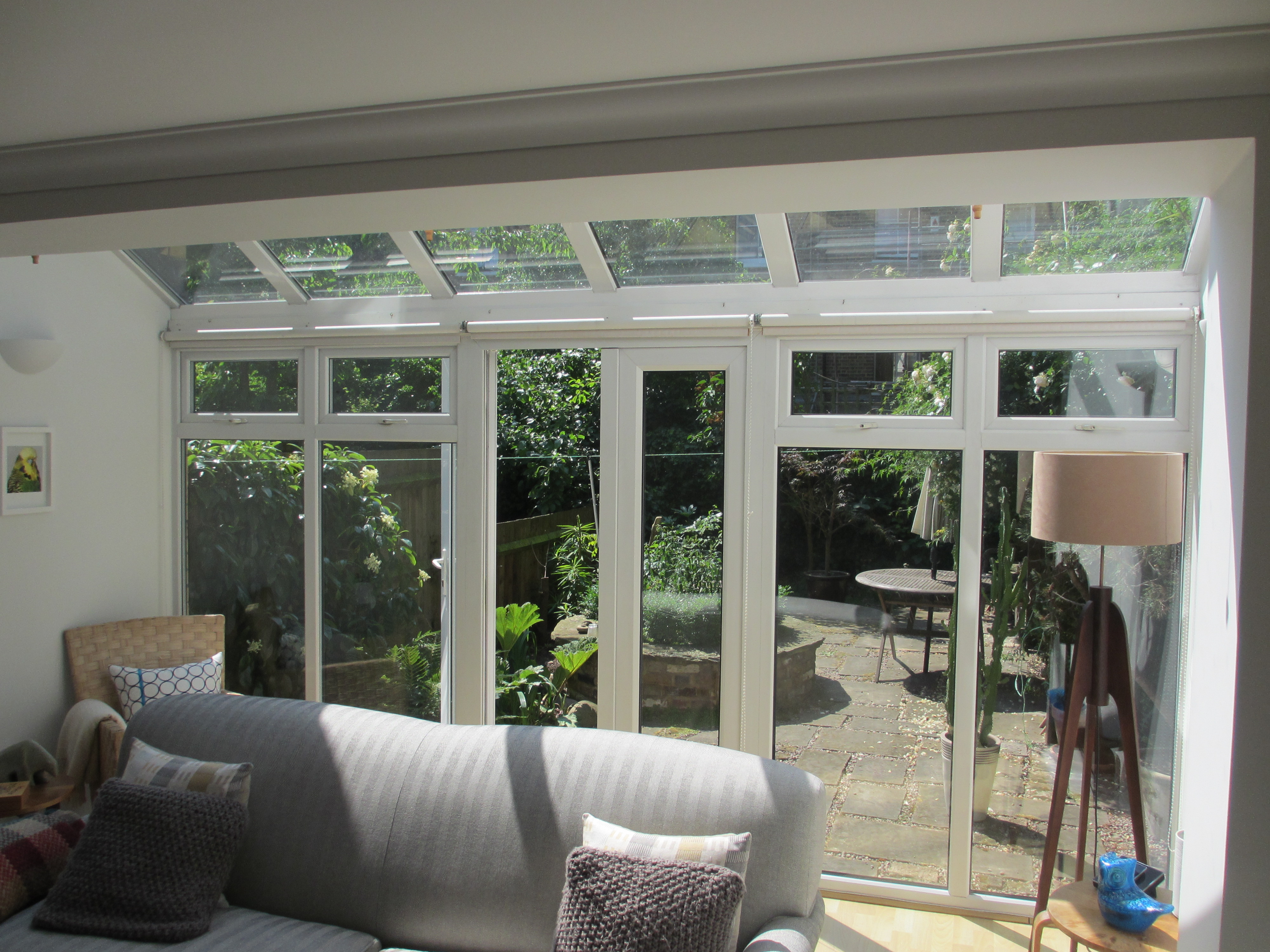 Above: The PVC glazing system that was original to the building. 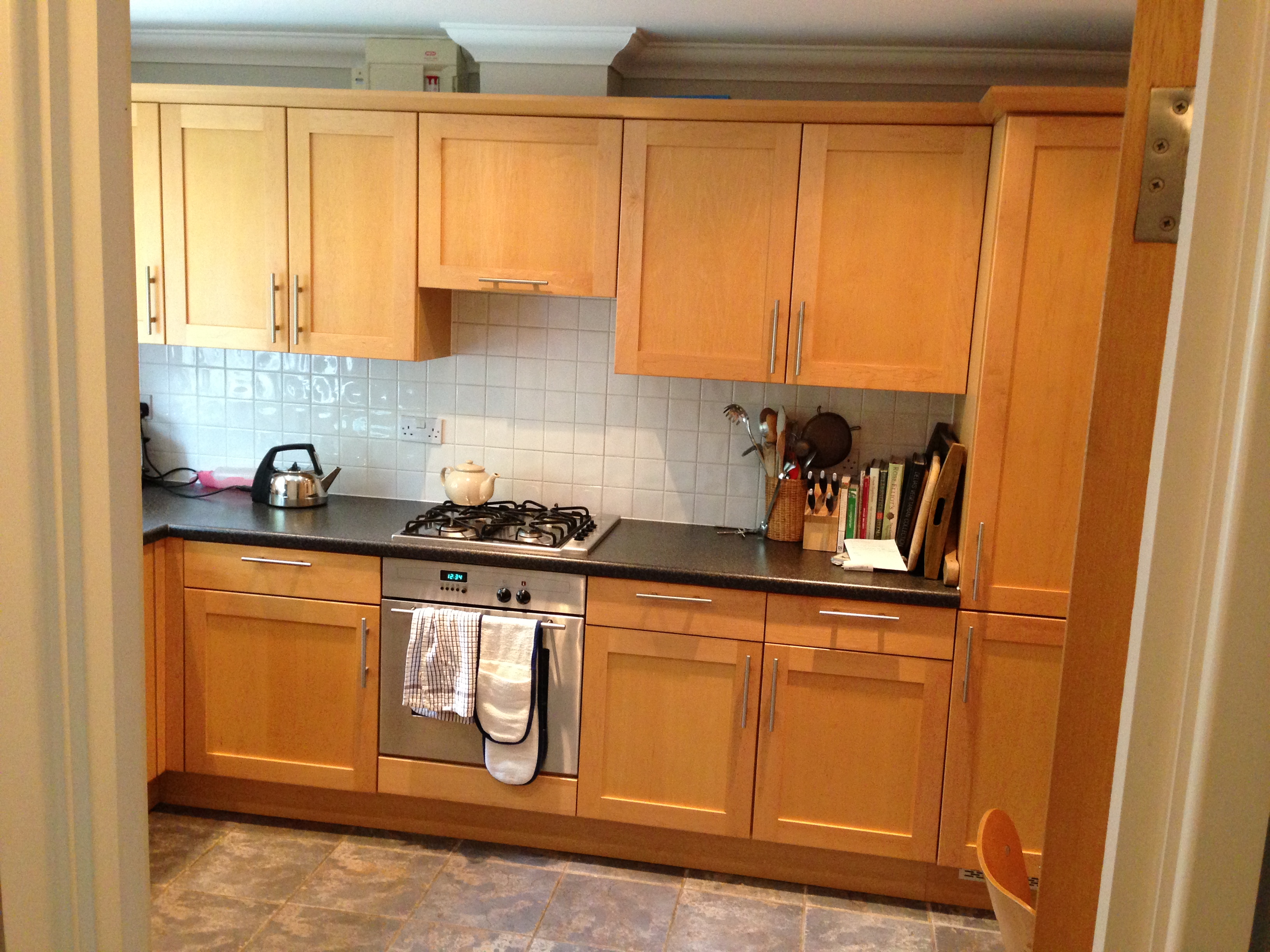 Above: The previous “hodgepodge” kitchen with its mix of colors and materials. 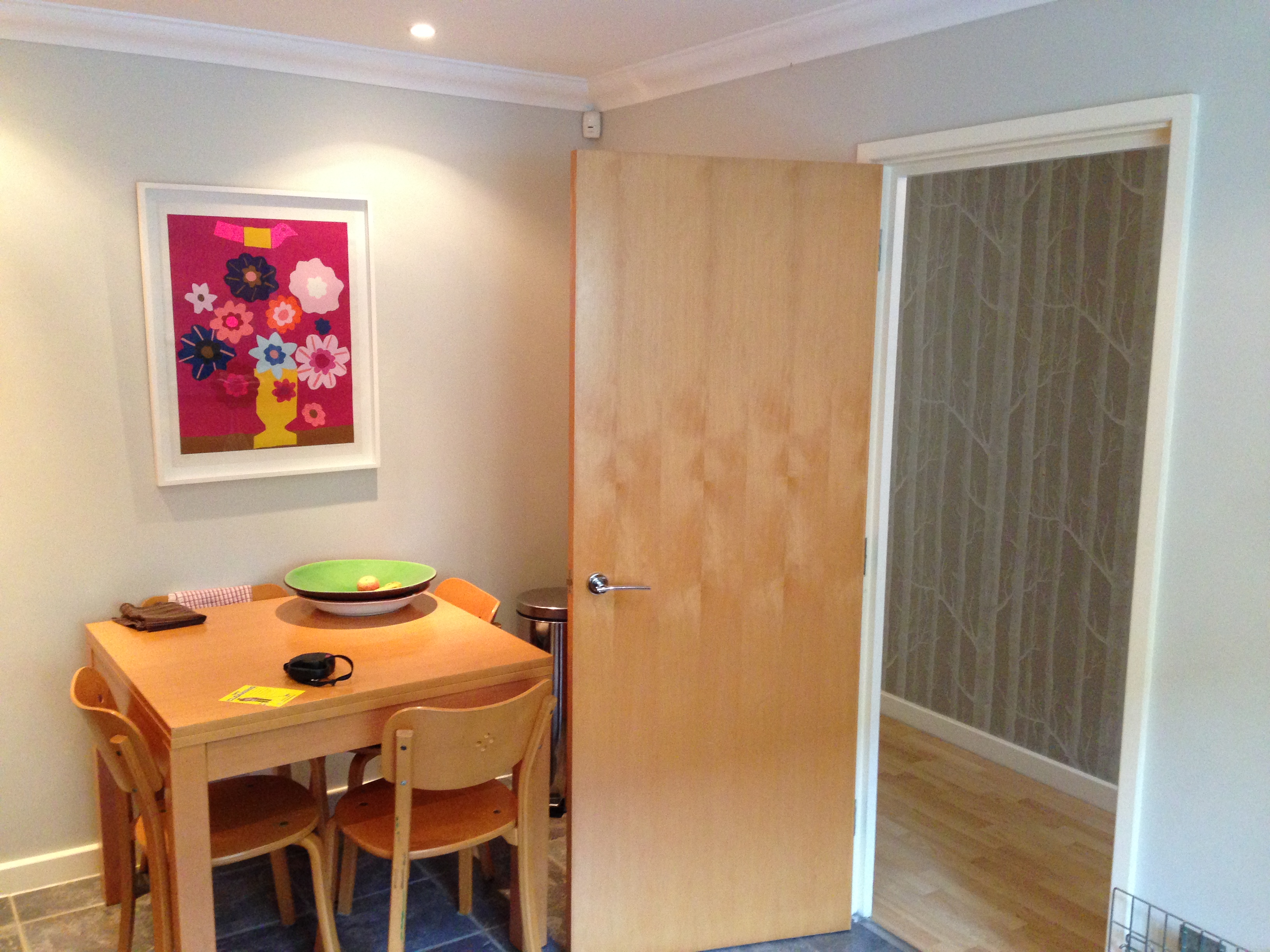 Above: The kitchen as it was originally closed off to the hallway.

Christine is also the writer of the new lifestyle and wellness blog My Contents Have Shifted–A Fabster’s Musings on Being 50 and Beyond.