If you’ve fallen under the spell of UK phenom Edmund de Waal (as we have), you might find yourself obsessively rearranging your pottery in an attempt to replicate his inspired groupings. “How to live with objects, how to arrange them and give them space within the home, is central to my life,” de Waal told The Sunday Times. Here are six lessons culled from the master for living an artful yet uncluttered life.

Above: For his Ghost exhibit at Kettle’s Yard in Cambridge (the town where he was raised), de Waal propped a suite of porcelain platters and vessels on a doorframe ledge. As he told The London Sunday Times, “Layer objects in unused spaces–on a wall, above a cornice, or over a door frame. Not everything has to be at eye level.”

Above: Skylight as design moment? De Waal grouped pale celadon pots in his Porcelain Room at the Geffrye Museum in London. He explained to the London Sunday Times: “Recently, I’ve tried new ways of layering my work into people’s spaces, making installations that can hover high above the traffic of family life.”

Above: Good news for collectors: “Clutter becomes a collection when it’s framed–for example, on a shelf or in a case,” says de Waal in The Sunday Times.

Above: “Framed clutter” from de Waal’s On the Properties of Fire exhibit at Waddesdon Manor.

4. Everything Doesn’t Have to Match 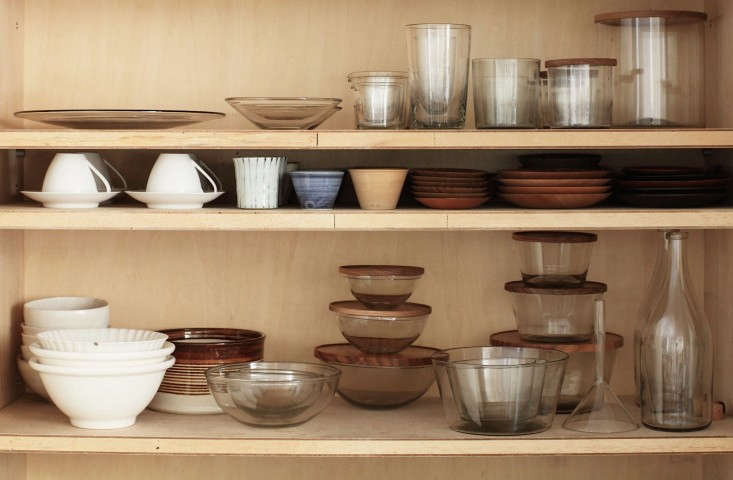 Above: As de Waal tells The Independent, “I don’t think one should be evangelical about using handmade things. It’s just too expensive and doesn’t reflect the way we live. Be like the Japanese. Nothing matches.” Case in point, the cupboard of US/Japan glassmaker Peter Ivy (above), which features a mix of glass and porcelain.

Above: For an installation at Blackwell House in Cumbria, de Waal installed a suite of sylphlike pots to contrast with the ornamental architecture. “My work is about the language of sculpture, it’s about multiples and minimalism,” he says in the New York Times.

6. Think Outside the Box

Above: For his Ghost exhibit at Kettle’s Yard, de Waal tucked ceramics between volumes in the bookshelves and in rustic wood cupboards.

Select pieces by Edmund de Waal are available at Matin in Los Angeles.

At Home with Rosa Park of Cereal Magazine