Designing New York loft spaces is a whole art unto itself, and SchappacherWhite (a member of the Remodelista Architect/Designer Directory) is well-versed in making the most of this very limited, valuable square footage.

Steve Schappacher is an architect and Rhea White is an interior designer; over the last fifteen years, they’ve tackled some three dozen loft projects (as well as their own renovation of a fisherman’s cottage; see Architect Visit: Shelter Island House by SchappacherWhite). In this case, they worked with a young family from New Zealand who had a loft in the Dietz Lantern Building, one of Tribeca’s many warehouses. Schappacher and White created a very contemporary space, pulling together both sleek and rustic elements under a unified palette of black and white. 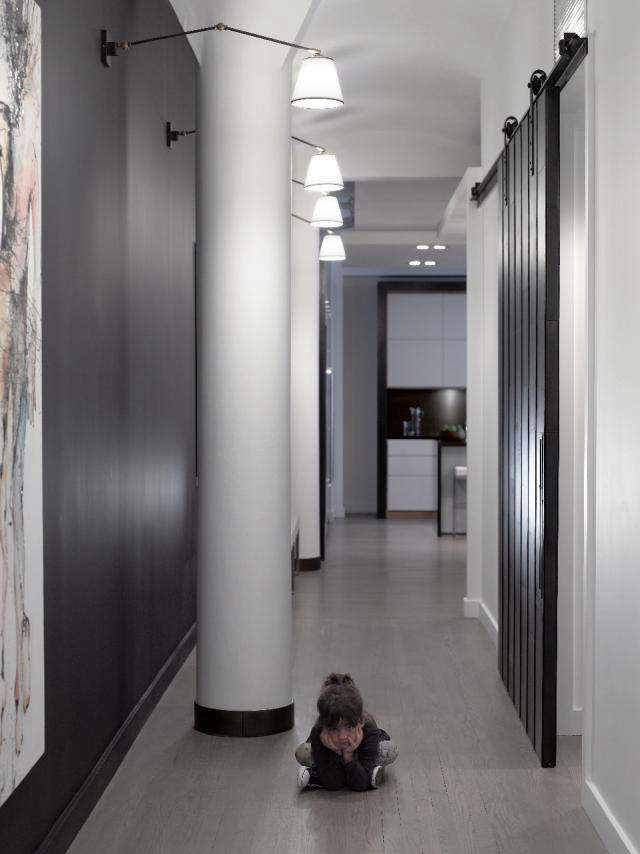 Above: The entrance to the loft takes you into a long hallway, with a long row of columns. The floor is white oak, sanded, bleached, and stained gray. SchappacherWhite worked with lighting company O’Lampia to customize one of their sconces for the space. To the right is a sliding door, modeled after classic loft doors, built by Gunnar Design. “When you design a large open space, you look for ways to make it private as well,” says Schappacher. 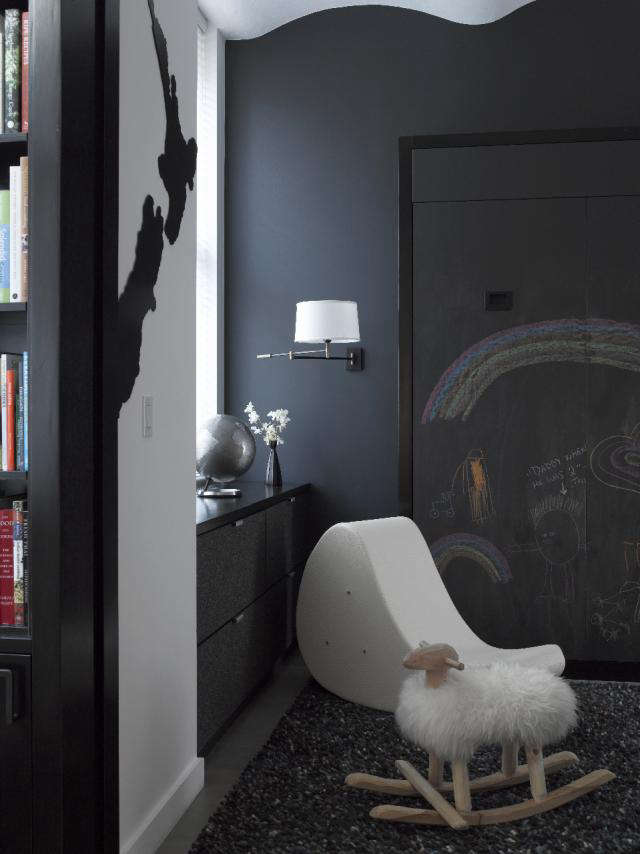 Above: “I always put a dark wall in every project, they add so much depth to any room,” says Rhea White. The small guest room doubles as a playroom when the grandparents aren’t visiting from New Zealand; a Murphy bed is concealed behind the chalkboard wall. The white padded chair can be turned on its side and used as a bedside table. The built-in beneath the window is covered in an acoustical material from McMaster-Carr, which serves as a tack board for art projects. 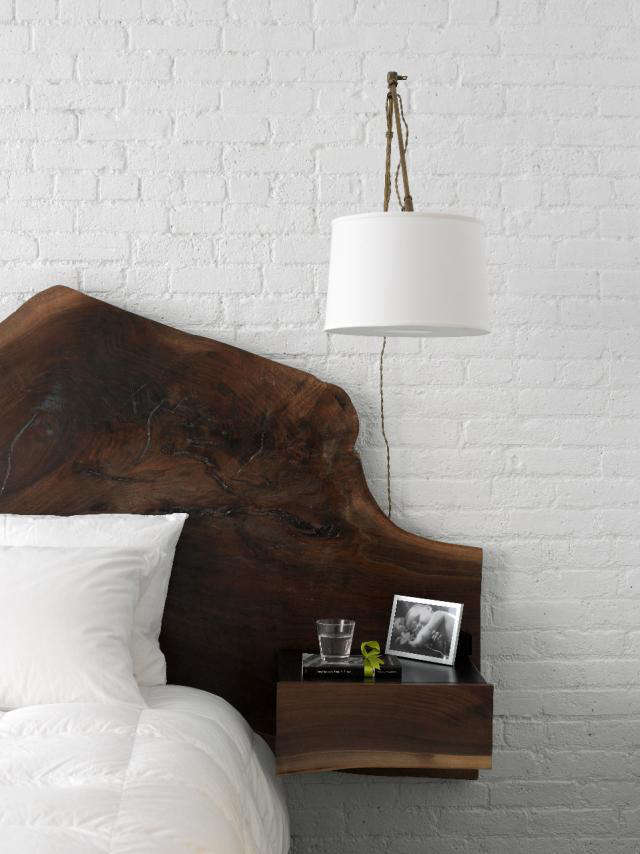 Above: The floating walnut headboard is by Marsia Holzer, who also supplied a bracket system for mounting the heavy headboard. 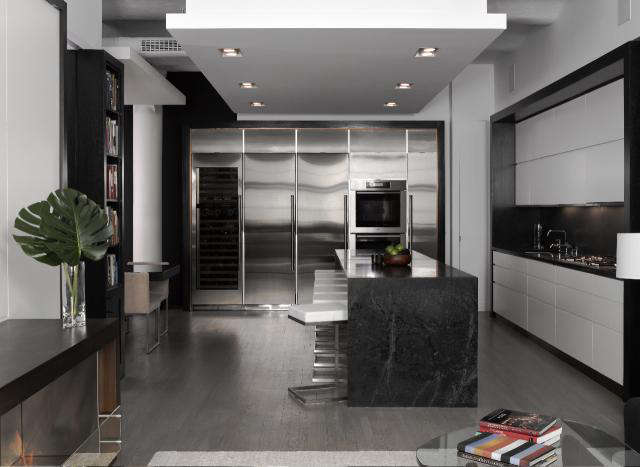 Above: “One thing that we really worked hard to do in the kitchen and with all the rest of the cabinetry is to frame them, so they became objects in themselves,” says Schappacher. “We didn’t want them to be big huge built-ins, in order to retain the open feeling of the loft.” 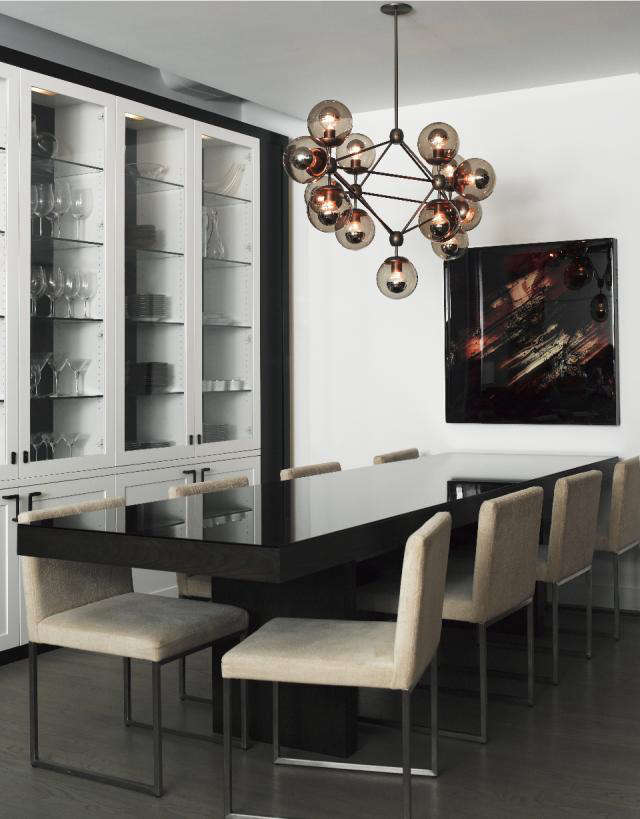 Above: For the dining room fixture, the firm worked with Roll & Hill to modify one of its existing lights, which is now in production as the Modo Chandelier, Diamond, 13 Globes. The dining room and chairs are from Soho furniture company Desiron.

A Star Is Reborn: An Iconic Midcentury House in LA Renovated by Park McDonald

A Renovated Farmhouse in Bedford, NY, with Scandinavian Influences

by Meredith Swinehart
May 20, 2019
Read all recent posts