Ian Hague needed a place to chill out. When he acquired 75 untouched acres in New York’s Hudson Valley, the NYC fund manager (whose business focuses on Eastern Europe and Russia) envisioned a “hermitage in the forest” tailor-made to his interests: reading, building balsa wood model airplanes, driving a Tesla, and decompressing amid the treetops. He also wanted to create a state-of-the-art, low-impact retreat and enlisted sustainability specialists BarlisWedlick Architects of NYC and Hudson, New York, for the job.

After encountering a fox on the property during his first visit, Hague dubbed his Columbia County spread Fox Hall, and during the many months of collaborating with lead architect Alan Barlis and team, a multi-building compound emerged. On Gardenista, we recently explored the grounds, which include a reconstructed 19th-century barn, natural swimming pool (filtered entirely by plants and organic systems), and three-story porch with sauna. Today we’re touring the linchpin of the project, Hague’s built-from-the-ground-up barn-style house.

Photography by Jonny Valiant unless noted, courtesy of BarlisWedlick Architects. 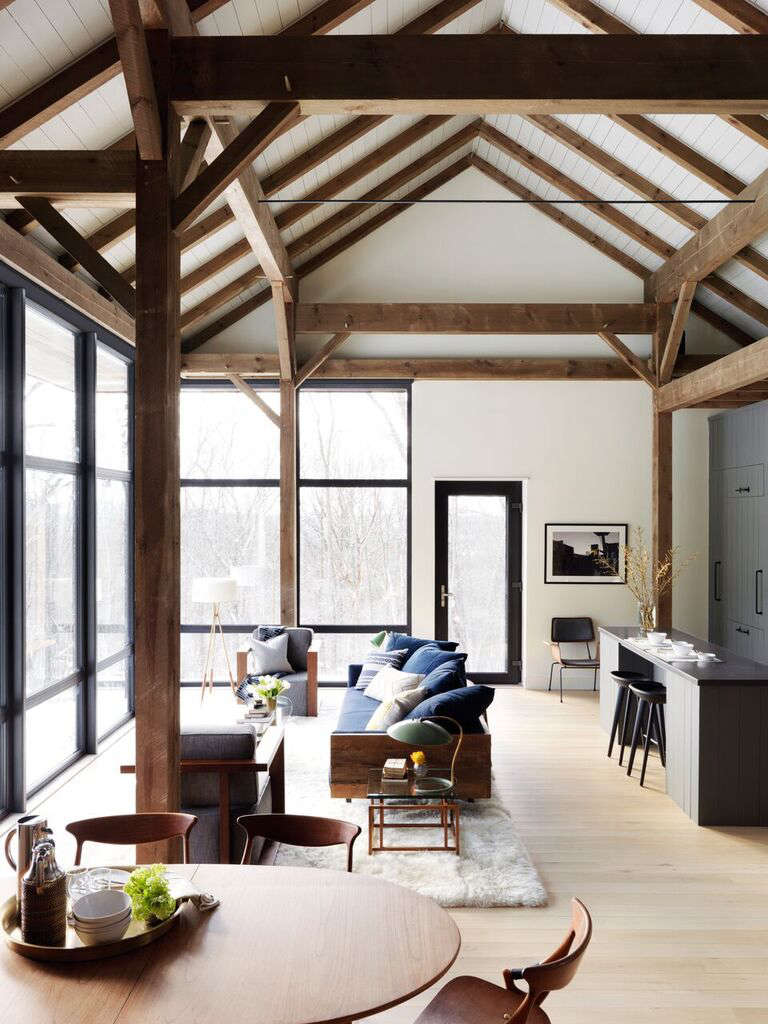 Above: The 1,800-square-foot structure is a passive house: It meets a stringent set of architectural standards, including “a super-insulated building envelope” and constant fresh air circulation, that Barlis told us “decreases the energy required for heating by 90 percent and for cooling by 80 percent—and we’ve often seen even better results.”

The open-plan main floor is designed around floor-to-ceiling windows supplied by Intus. “The exposed timbers are reminiscent of the 19th-century dairy barn we salvaged and placed on the property,” says BarlisWedlick’s in-house interior designer Elaine Santos. “Ian brought images of whitewashed spaces to our design meetings and so we wanted to keep the overall feeling of the house layered but light: oak floors and white walls.” 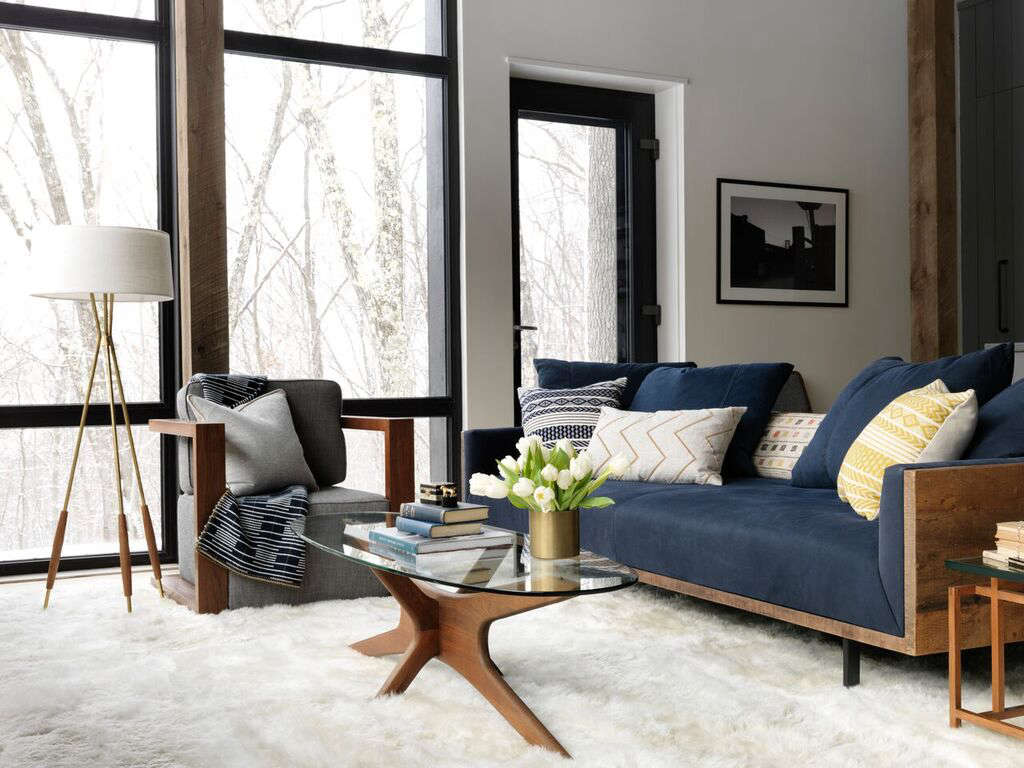 Above: Hague also likes color, so hints of navy and mustard were incorporated into the neutral backdrop, but sparingly on the main floor to avoid competing with the view. The sofa is a Jean Marie Massaud design for Environment, upholstered in vintage tent canvas. The rug is a long-haired sheepskin from Sacco Carpet. 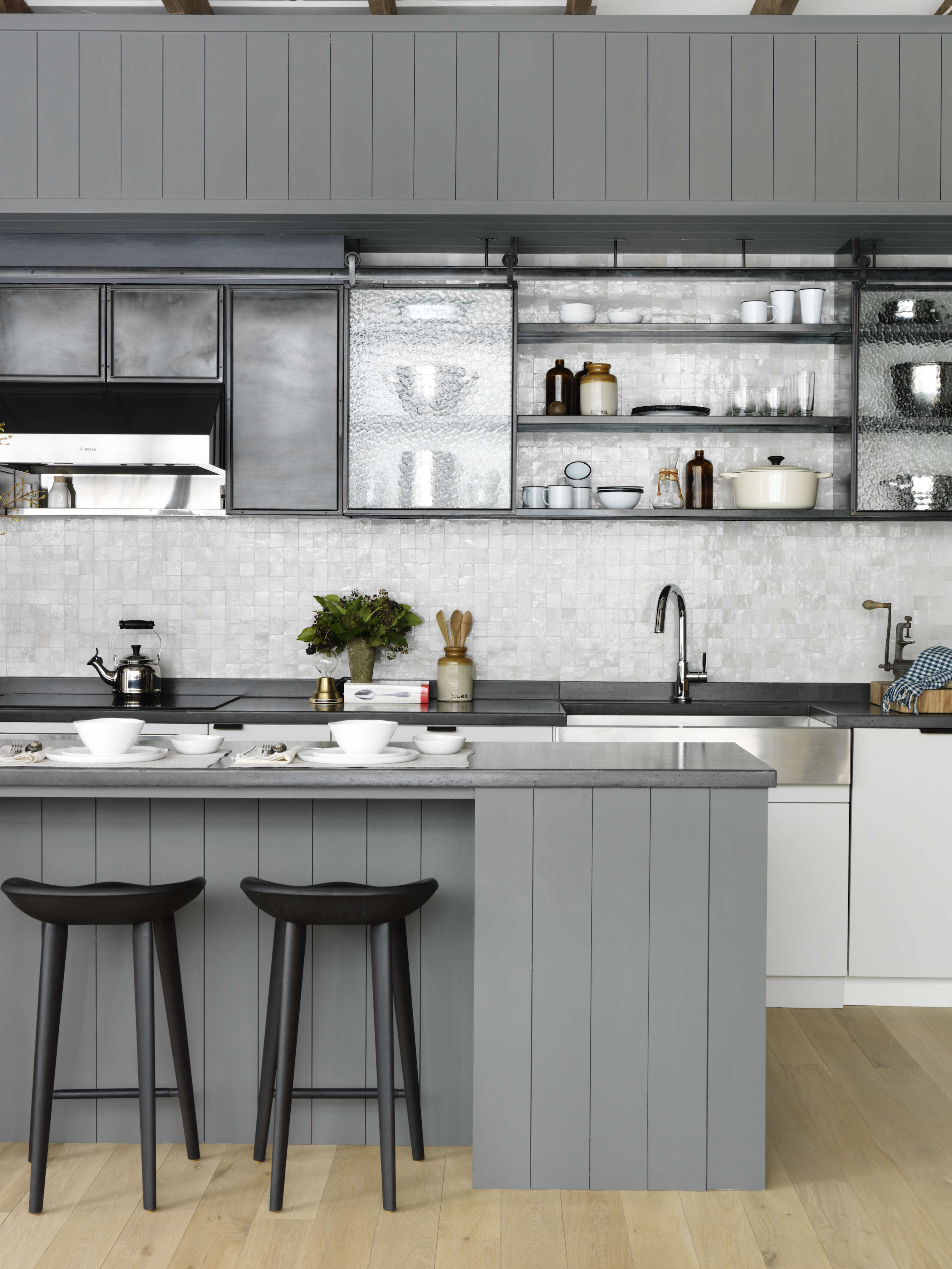 Above: Another crucial element in the design vocabulary is shiplap paneling with a 1/6-inch seam/rabbet. Used here on the kitchen island, it’s painted Benjamin Moore’s Kendall Charcoal in a matte finish throughout. “The vertical orientation of the boards draws your eye upward,” says Santos. The counters are concrete fabricated by Get Real Surfaces (which also made the diamond-polished concrete floors in Tiina Laakonen’s house). The Tractor Stools are modern classics by BassamFellows. 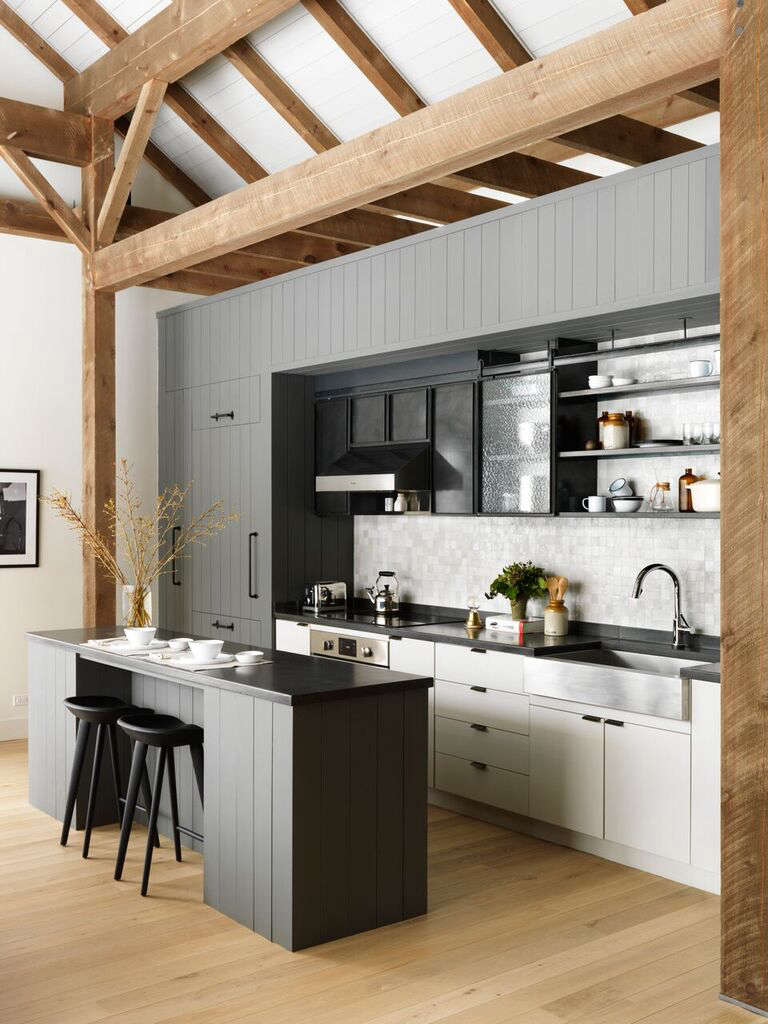 Above: BarlisWedlick tucked the fridge and pantry into shiplap cabinetry and detailed blackened steel overhead shelving with sliding glass doors: “The architectural glass has an undulating pattern, so it acts like another window in the room reflecting natural light from the main windows,” says Santos. The undermount sink is from stainless specialists Amerisink and the faucet is Brizo’s Solna in chrome. The range is a Bosch 30-inch 300-series (with a Bosch vent integrated into the suspended steel cabinets). Note that the backsplash extends to the back of the cabinets; it’s patterned with two-by-two-inch Rceef Ceramic Tiles from Mosaic House. 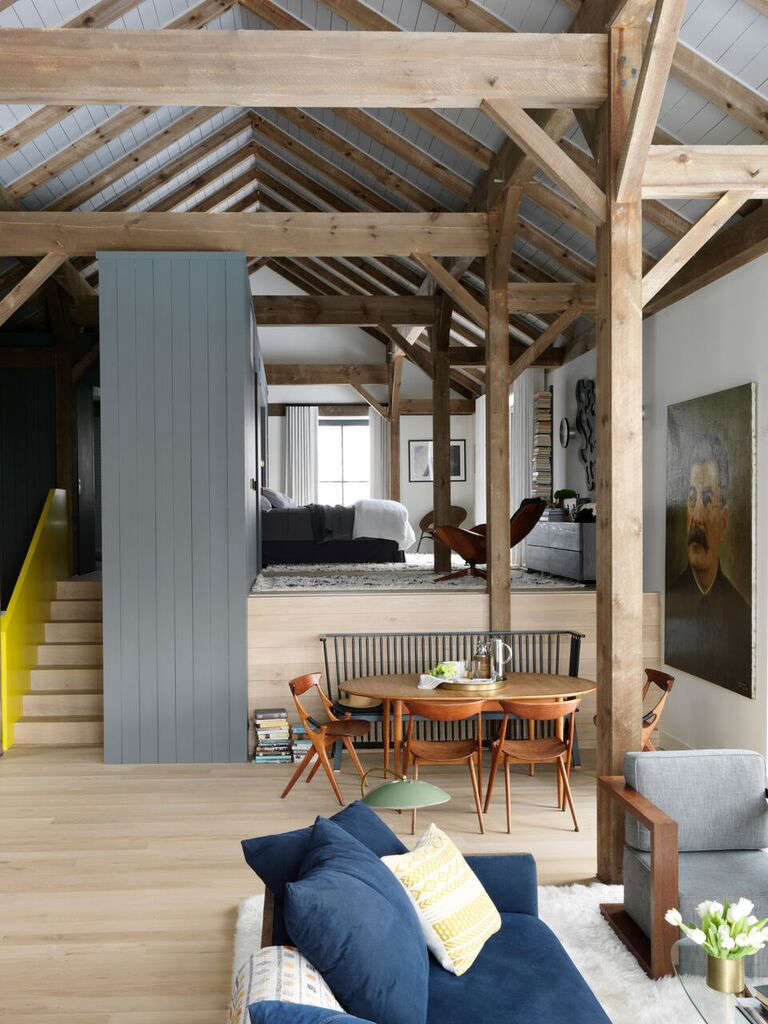 Above: Accessed by a half stair, the master bedroom is fully visible in the back of the room—for privacy, a partition of blackened steel (with “mushroom insulation to dampen noise”) can be raised and lowered at the turn of a crank. The dining table and Danish modern chairs are vintage and the Shaker-inspired bench is Studio Ilse’s Two-Seater Low Settle. 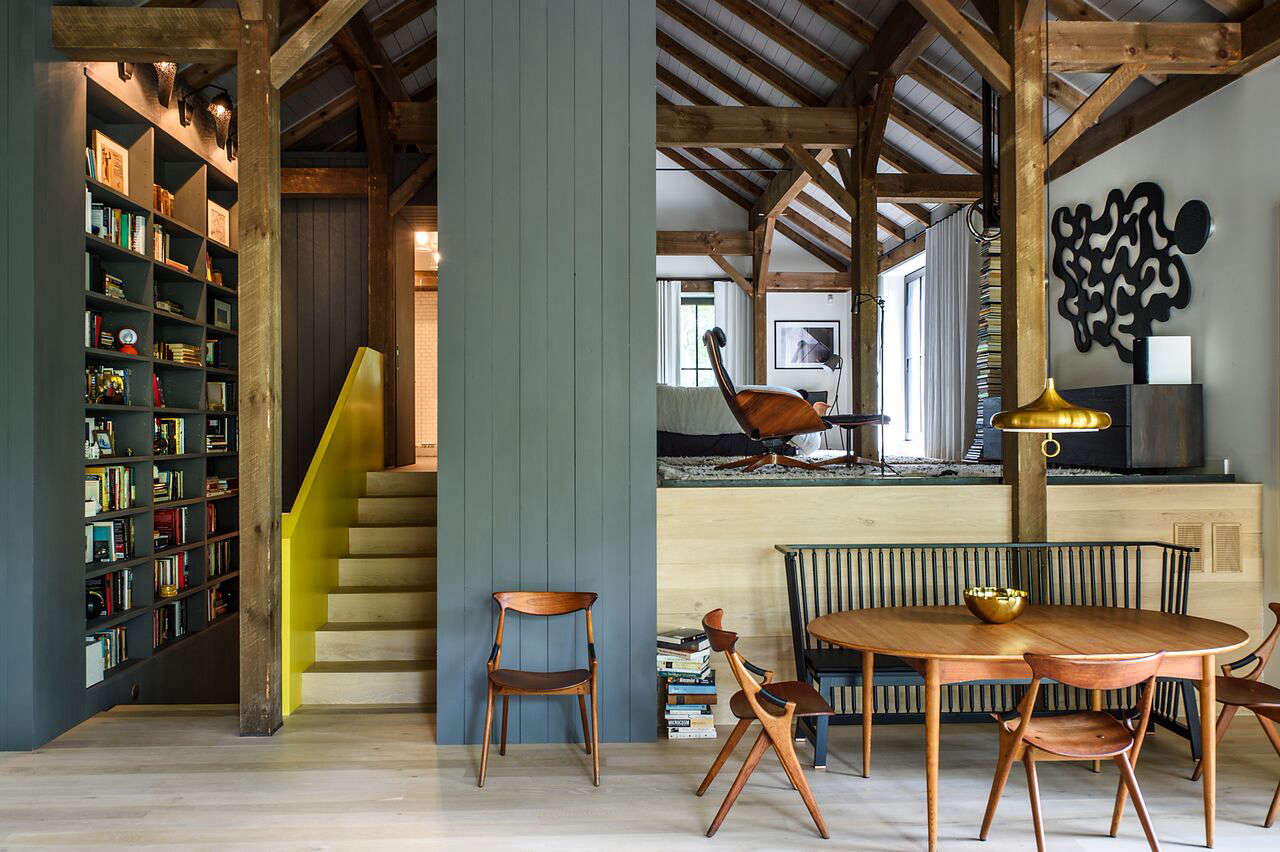 Above: “This stair is like the host who welcomes you in and guides you through the space,” says Barlis of the angled design painted a bright citrine to contrast with the “boulder-like slate-gray millwork.” The dining table light, a new addition to the room, is the French Ipso Facto Pendant from the 1970s. Photograph by Reto Guntli. 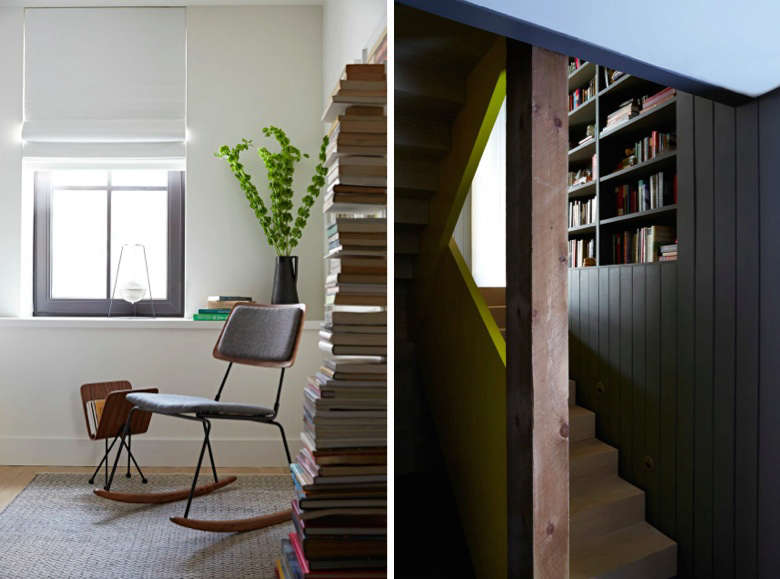 Above L: The rocker in the lower-level guest room is a variation of the Carson Rocker made by Onefortythree, a husband-and-wife team in Las Vegas. Santos sourced the Roman shade from the Shade Store. Above R: In addition to the bookcase at the base of the stair, shelves are cleverly inset into the stair wall. 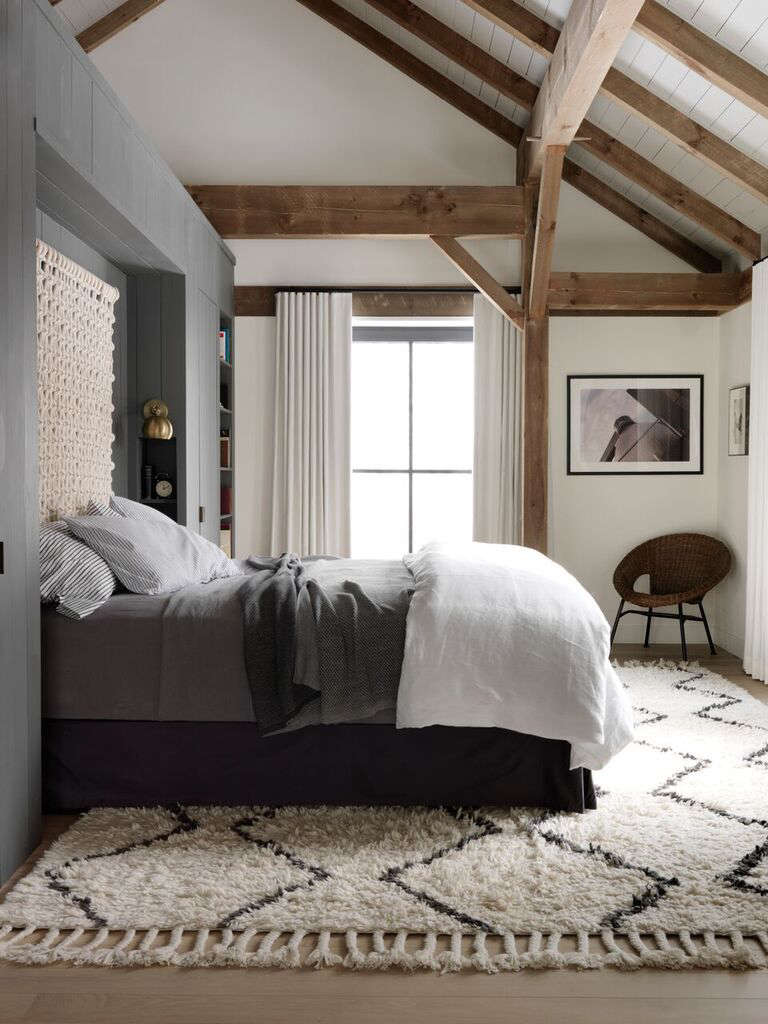 Above: The master bed is set in a millwork niche “so it feels like part of the architecture,” says Santos—and allows for unobtrusive bookshelves and closet storage on either side of the bed. 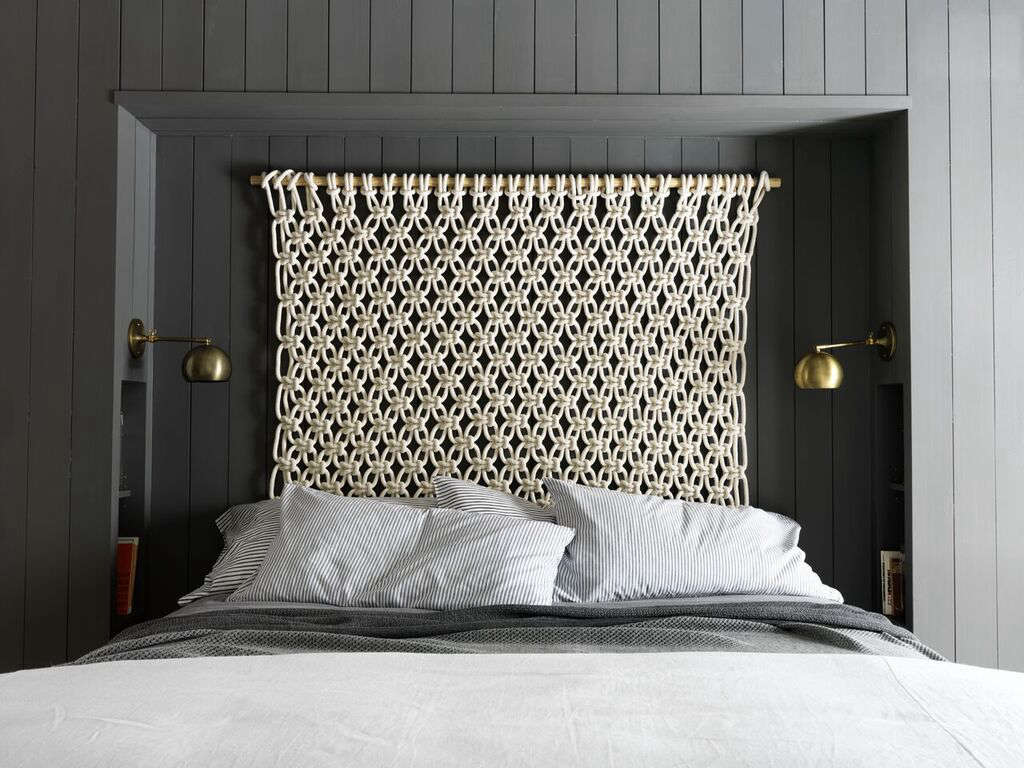 Above: A macramé panel by Sally England takes the place of a headboard and lends texture to the tailored space. The lights over the shelves are Schoolhouse Electric Isaac Brass Ball Shade Sconces. 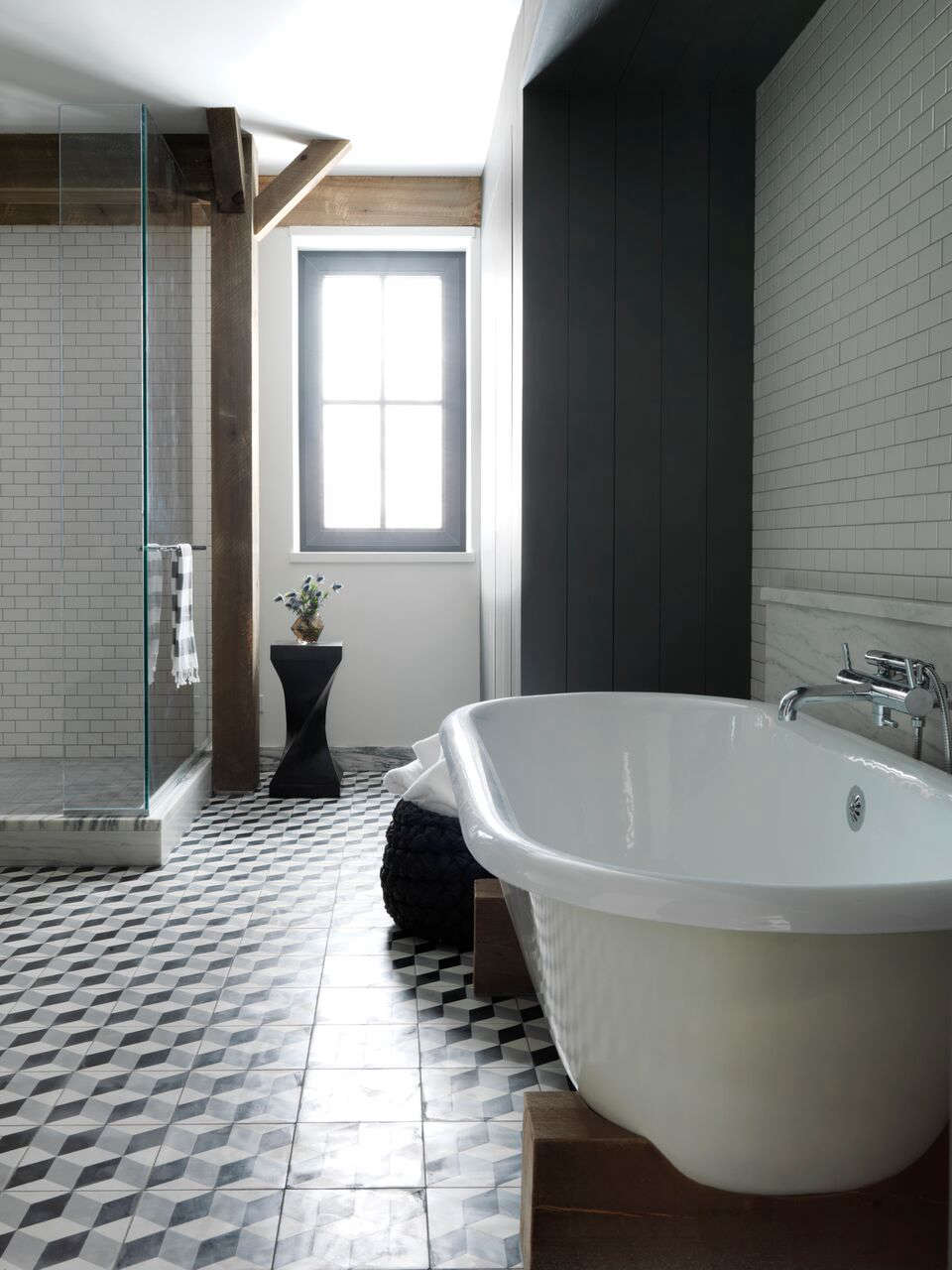 Above: In the master bath, the designers planted a 68-inch-long Signature Hardware tub on a base of the same rough-sawn Eastern white pine used for the timbers (all of which are finished with LifeTime Wood Treatment, a stain Santos describes as “made of plant extracts and minerals”). The Cube concrete floor tiles are from Mosaic House and the subway tiles are Daltile’s two-by-four-inch Rittenhouse Squares in a running bond pattern. 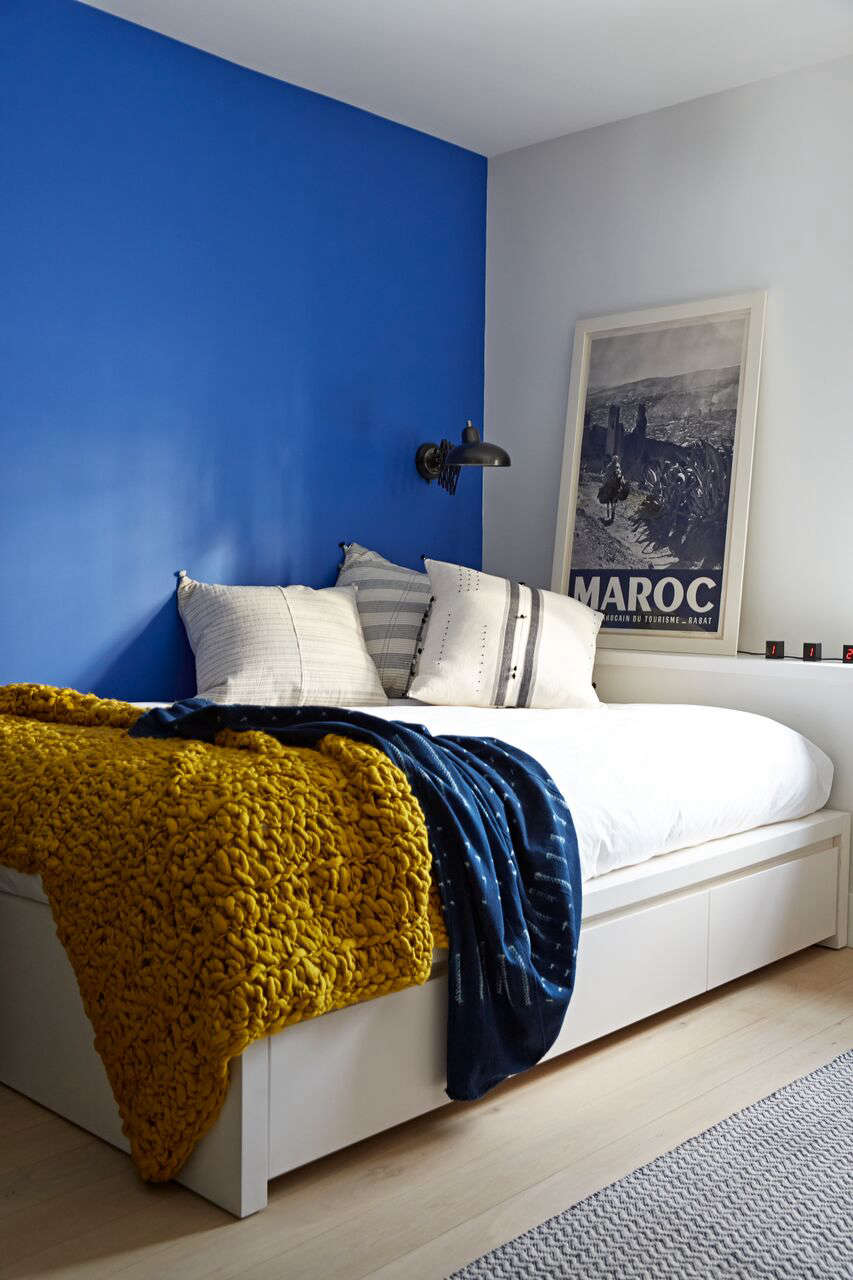 Above: Navy and mustard make a bold reappearance in the guest room, furnished with West Elm’s Storage Platform Bed. The accent wall is in Benjamin Moore’s Twilight Blue. The blanket is Avec’s Gold Onda Throw of hand-spun, hand-dyed merino wool made by a cooperative in Brazil. Notes Santos, “The two colors balance each other,” and like the macramé in the master bedroom, the wool adds visual softness. 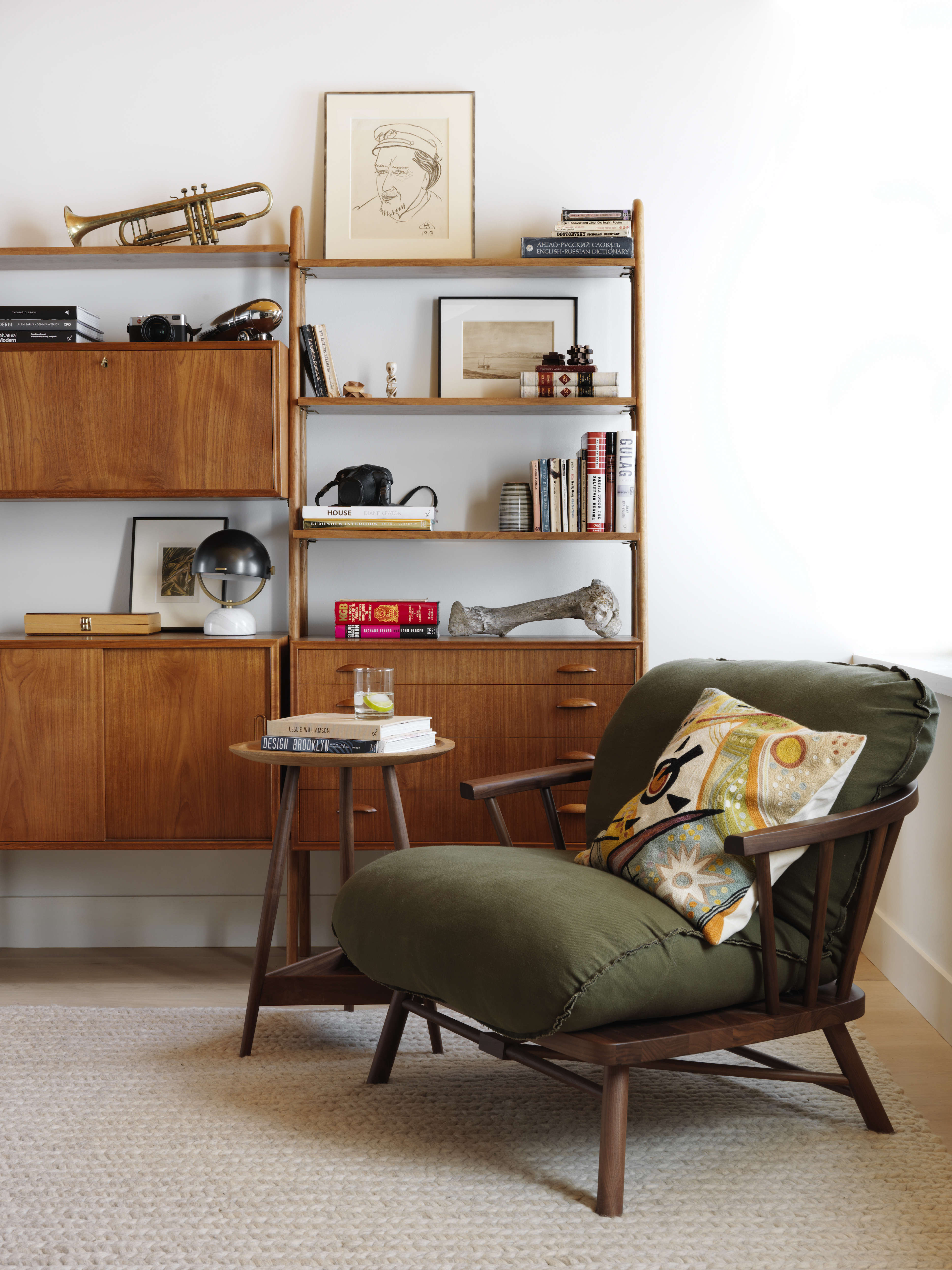 Above: Next to the guest room, there’s a TV room with a Neo Shaker Lounge Chair from Environment made of American black walnut. 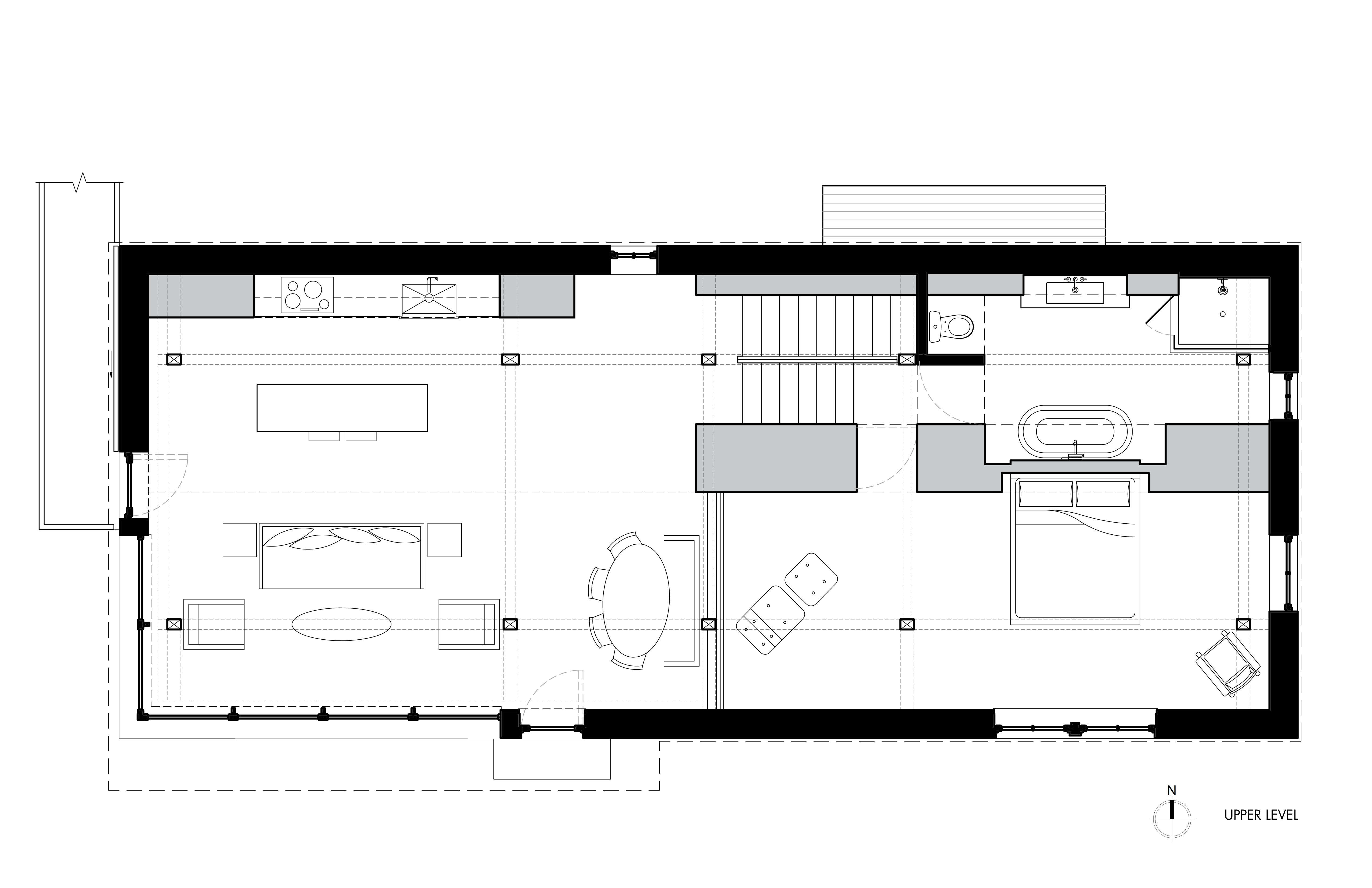 Above: The house’s upper level consists of the living area and an elevated bedroom and bath. 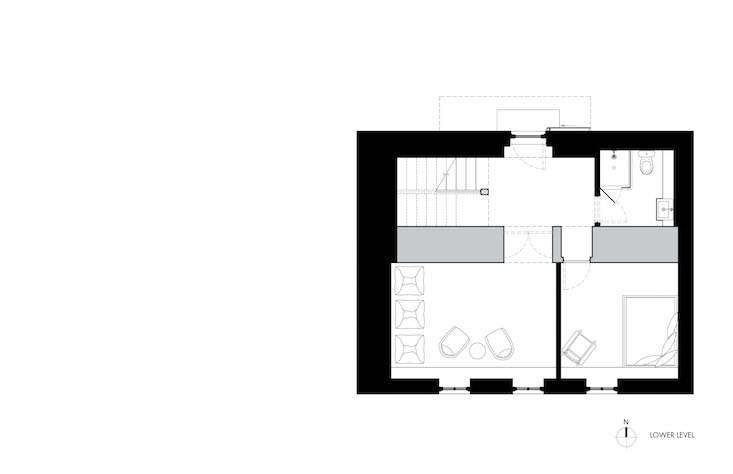 Above: On the bottom floor: a guest room and TV room with a trio of beanbag chairs.

See more of the project on Gardenista.

Explore another sustainably designed country house in The Architect Is In: A Rural Barn Transformed for Modern Living.

Kitchen of the Week: A Katrin Arens Design in Sardinia with 250-Year-Old Wood