The passive house approach to building has been on our radar at Remodelista for years. Until recently, we thought of it as something akin to feng shui: an exacting set of rules that promise intriguing payback. Passive houses—also known as passivhaus buildings—offer very tangible results: the ultimate in energy efficiency.

And now, as the climate crisis weighs more heavily by the nanosecond, we’re wanting to take a closer look. We recently featured a passive house in the Catskills designed, built, and owned by Maria Ibañez de Sendadiano and Todd Rouhe of IdS/R Architecture: see Head for the Hills, Vipp Kitchen Included. Maria agreed to fill us in on how the system works.

What is a passive house?

It’s a voluntary set of building standards that aim to create houses and other structures that are comfortable and healthy yet consume very little energy. This is achieved via five principles: continuous insulation, airtight construction, optimized windows, balanced ventilation, and minimal mechanical. In this country, the Passive House Alliance helps teach, certify, and spread the word: its goal is to “make passive building mainstream.”

When and where was the concept developed?

It was developed by Swedish structural engineer Bo Adamson and German physicist Wolfgang Feist initially as a conversation in 1988; the series of research projects that followed led to the principles and recommended performance goals. Adamson and Feist were based in Europe but their studies began by investigating North American projects of the 1970s that were responding to the oil embargo. One of the seminal projects they looked at was the Saskatchewan Conservation House, which helped pioneer energy-efficient housing and led the way to building standards.

In terms of energy use, how does a passive house compare to a standard house?

Passive houses can use up to 90% less energy than a conventional house.

They do, but much less heating than a standard house in the same climate. If a house is airtight and well-insulated, the indoor environment will remain warmer (or cooler) longer—much like a good thermos that maintains the temperature of whatever you put in it.

No, they aren’t bound to any specific style, but they have defining features, such as thick walls (that allow for super insulation) and triple-glazed windows. Design-wise they take many forms, from traditional to modern, and from simple to complex.

What are other qualities that define passive houses?

Passive houses are notably comfortable: the interior temperature doesn’t fluctuate from month to month and there are no drafts. They’re very quiet thanks to their insulation and windows. They’re also clean because the air is filtered.

What are passive houses built from?

Many are built from structural insulated panels known as SIPs, which are a composite like a sandwich cookie, which serves as framing, insulation, and exterior sheathing all in one. There are several options for both the SIP “cookie” and the “filling.” The outer layers can be oriented strand board (OSB), metal, plywood, or even Sheetrock. The core is a thermally insulating plastic foam of various types. Building with SIPs means that there are fewer components. The panels are 8 or 10 feet wide by up to 20 feet long. The joints are taped on both sides and the screw holes are filled with spray foam. The importance of a continuous envelope without leaks is directly related to airtightness: in reducing the number of joints and components, air leaks are reduced. The biggest sources of air leaks in conventional buildings is windows and doors. Passive house windows and doors have, among other thing, better seals and door sweeps.

How does airtightness impact energy efficiency?

When a house is airtight, the indoor environment can be maintained without having the air conditioner or heater run as often. If a house is leaky, it’s like having a window open with the air conditioner running. (That said, you don’t have to live sealed shut: you can leave windows and doors open in a passive house.)

What about damp and mold? How does a passive house stay healthy?

The key is a balanced ventilation system, such as an HRV (Heat Recovery Ventilation) or ERV (Energy Recovery Ventilation). With balanced ventilation, fresh air entering the building is equal to the exhaust air exiting it. (The air flows need to be balanced so that the air inside the house doesn’t get pressurized, which would lead to an increase in air infiltration.) An HRV and ERV recover and transfer the temperature of the exhaust air to the incoming fresh air by having the paths of the two types of air cross in separate channels. In the winter, the interior air warms up the cool exterior air. The incoming fresh air is filtered.

Additionally, humidity is treated by HRVs and ERVs differently. HRVs maintain the humidity level of the interior. ERVs remove the humidity of the interior air. HRVs are better suited for dry environments. ERVs are better suited are better suited for damp environments, like where our house is in New York State. In layman’s terms, again consider a thermos analogy: when a house is poorly insulated, you can get condensation inside, which can lead to mold—just like ice water in a glass sweating on the outside. But if you put ice water in an insulated vessel, the cold from the inside won’t impact the outside.

Not necessarily: SIPs are made with crude oil and other questionable chemicals, but their insulating value is unmatched. The energy saved in using these materials outweighs the environmental impact of the production of these products. The Passive House Standard is concerned with how efficiently the building functions for the life of the building. If buildings account for about one-third of the energy consumed in the United States and the average life span of a typical structure is 120 years, then reducing the energy draw by buildings can have a substantial impact. Passive houses tend to be well built and durable.

Is building a passive house more expensive than a standard house?

Can an existing structure be converted to a Passive House?

Yes, conceptually, an existing structure can be retrofitted to conform to passive house standards. The process could involve building an outer shell around the entire house (wall and roof), but this isn’t always possible. There’s a more attainable standard called EnerPHit, a version of passive house design for retrofits of existing buildings. It, too, is a set of standards—including use of thermal insulation, high-quality windows, and ventilation with highly efficient heat recovery— that provide significant energy savings. 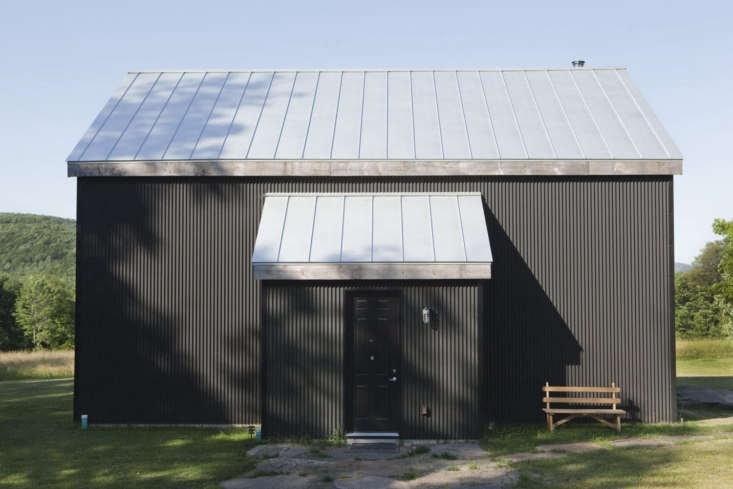 Above: To convert this 19th century barn in upstate, NY, to a passive house, architect Kimberly Peck clad the exterior in black corrugated aluminum with a standing seam aluminum roof. There are no windows on the front—that’s to keep insulation factors at their highest—but plenty on the back; see A Rural Barn Transformed for Modern Living. Photograph by Torkil Stavdal.

Is it possible to apply only some passive house approaches to a dwelling?

Yes, but that isn’t advisable. Passive house principles are interrelated: if a house is airtight, it needs a balanced ventilation system. If a house has continuous insulation, it will likely need very little heating and cooling.

Passive houses often gets confused with passive solar design (collecting and using energy from the sun to warm and cool the house). Are the two related?

Concepts of passive heating and cooling are part of the toolkit available to achieve passive house performance standards. The earliest projects studied by Adamson and Feist relied more heavily on passive solar heating methods, but the window technology of the 1970s and 80s was a liability: they allowed the sun to heat interior surfaces and were also leaky and transmitted the exterior temperature directly to the interior, which is no longer the case. The name stuck, even though passive heating is only one part of the equation.

So do passive house requirements include solar panels?

Not directly. One important goal of the Passive House Standard is to minimize the total primary energy consumption. This is given as maximum KWh per year per square foot. Solar panels help to offset this requirement. I have seen passive house projects that use propane for heating, for example, and they are able to meet the requirement, but this is a bit of a cheat. In our house, we focused on an all electric, since it’s a renewable source. We also have solar panels in a field adjacent to our house and recently signed on to receive power from wind farms.

What’s the most challenging part of building a passive house?

It’s being rigorous with the installation details that you need to achieve the performance standard. You can spend a lot of time and money making energy-efficient choices, but if they aren’t installed well, it’s wasted effort. The proper way to build to the Passive House Standard involves working with a passive house consultant. The process includes using modeling software to predict how all the specs will perform once built. The modeling is also part of the certification process. Then during construction, all components are documented in measured photographs to prove the project is built as designed.

In our case, we didn’t go through the official process: instead, we did the research and made educated guesses as to how our house would perform without the aid of software. There’s one test, the Blower Door, that evaluates the air tightness of the house. The goal according to PHIUS, the Passive House Institute US, is .6. Our house tested at .35. The lower the number the better. An aspect of building to Passive House Standard that continues is performance monitoring. Like most passive house owners, we track daily and yearly energy production and are continually looking for ways to improve that ratio. It’s a rewarding way to live.

For those ready to get serious, do you have any recommended reading?

Building for the Future: An Introduction to Passive House by Justin Bere and The Greenest Home; Superinsulated and Passive House Design by Julie Torres Moskovitz both introduce passive house principles and show examples. For architects and anyone wanting to get more technical, there’s Passive House Details: Solutions for High-Performance Design by Donald B. Corner, Jan C. Filinger, an Alison G. Kwok.

Thinking of building a passive house? Maria and Todd of IdS/R Architecture pinpoint the essentials in these diagrams. 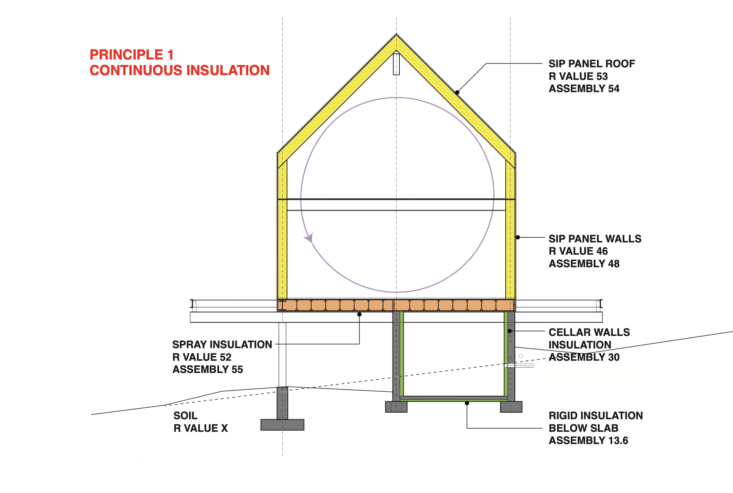 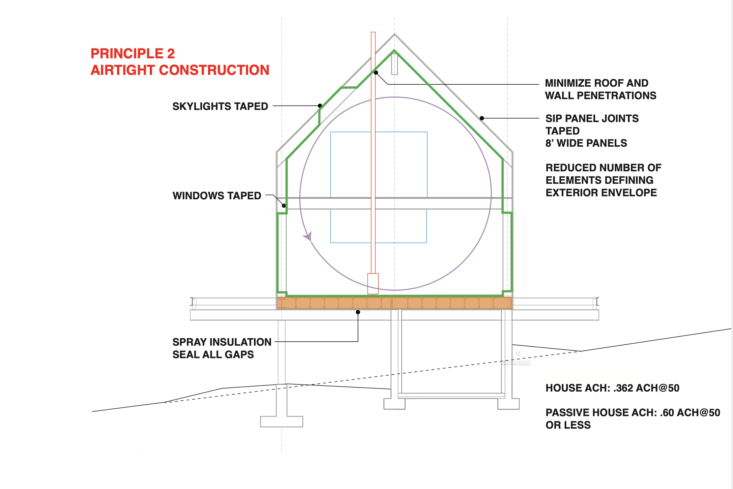 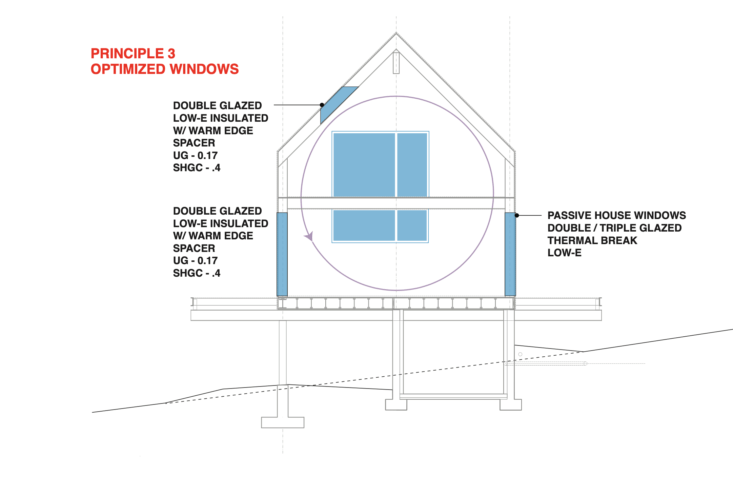 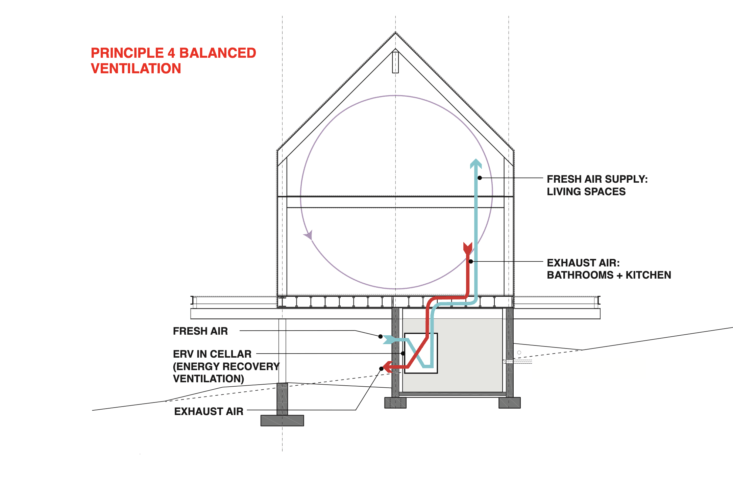 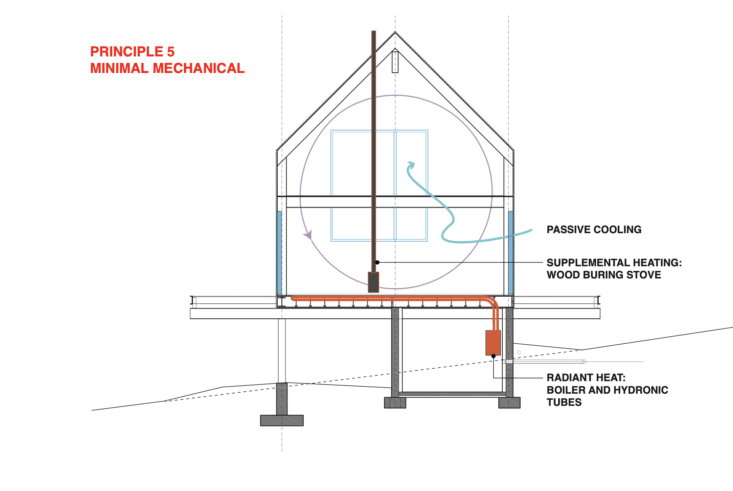 Find more expert advice in our Remodeling 101 archive, including:

In collaboration with: One-Stop Modular Kitchen Solutions from NewAge Products

A Game of Clue: A Stylist's Redone Victorian Cottage in New England

Dappled Light: A Slim but Poetic Townhouse on a Tree-Lined Square in Ghent, Belgium