How do two design pros—each with their own expanding retail empires in NYC and London—unwind on the weekends? Year-round, Andrew Corrie and Harriet Maxwell Macdonald escape Manhattan with their three young kids for Shelter Island off the eastern tip of Long Island. There, in a 1979 “ranch bungalow” with prime bayside views, they relax by lolling with their children—and engaging in an ongoing design discussion about ways to reinvent the house.

The place started as a humble two bedroom “built by a local developer who had a good eye for proportion,” says Andrew. After living in it for many years with just a cosmetic remodel, the couple hired an architect, moved on to another, and then decided to delve into a complete makeover on their own. Working closely with “a very talented engineer who has masses of practical experience,” they overhauled the structure, gaining 1,700 square feet (for a total of 4,500 square feet) while keeping it on one level with a built-out basement.

For furnishings, they didn’t have to look far: Harriet is a founder of Ochre, a design studio known for its modern glamour (think Arctic Pear Chandelier)—and currently so in demand that it’s opening a second showroom in London on Pimlico Road next week. Andrew, meanwhile, is the creator/owner of Ochre’s down-home counterpart, tableware and household essentials emporium Canvas Home (which itself just moved into a new NYC space near Ochre’s SoHo storefront). Together their work is a mix of luxe and laid back, city and country, New York and London that is distinctly their own. Take a look: The family retreat is, at least for now, fully complete. 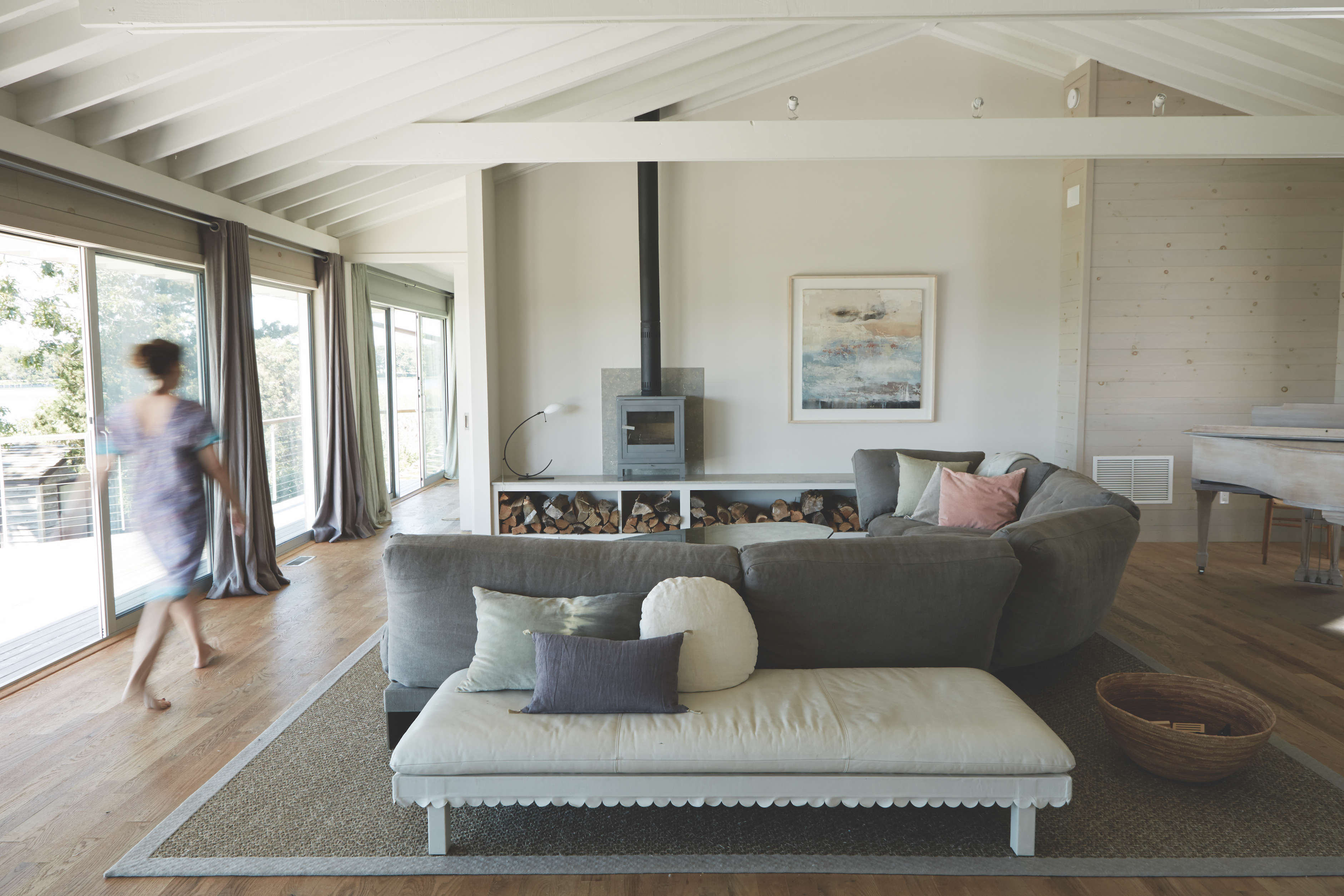 Above: “We steered away from unnecessary flourishes and tried to make the place feel down to earth—and to ensure that it sits in its landscape in a very unassuming way,” says Andrew.

Thanks to glass doors on three sides, and no neighboring houses in sight, the open living area is “all about the light and the views,” adds Harriet. “And you don’t want the interior to compete with that.” The scalloped daybed, Ochre’s Leather Bench, is paired with its Eternal Dreamer Modular Sofa. 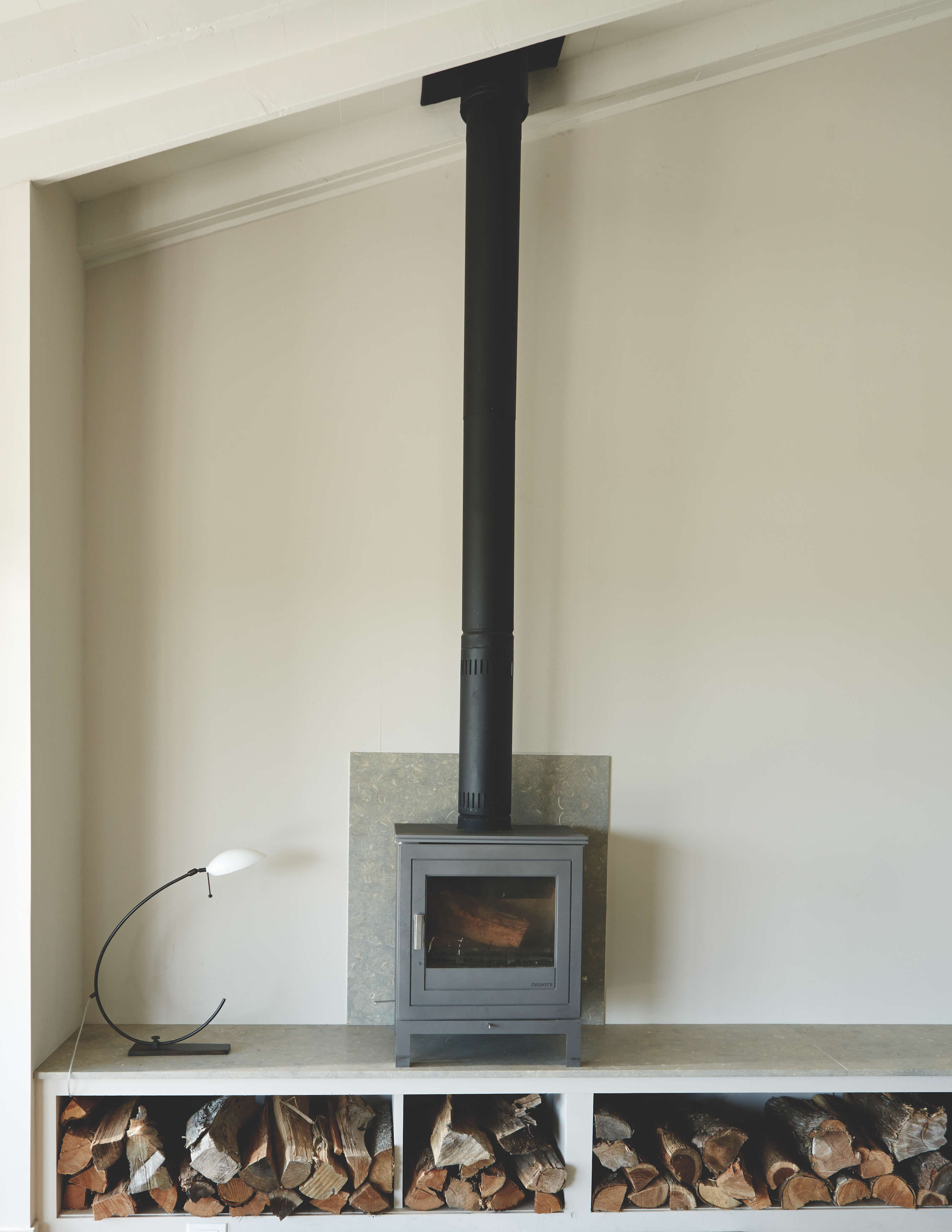 Above: A stove by English company Chesney’s is put to use from fall to early spring. It rests on limestone-topped built-in shelving that tidily holds firewood. The curved light is the Scorpion Single Head by Ochre. 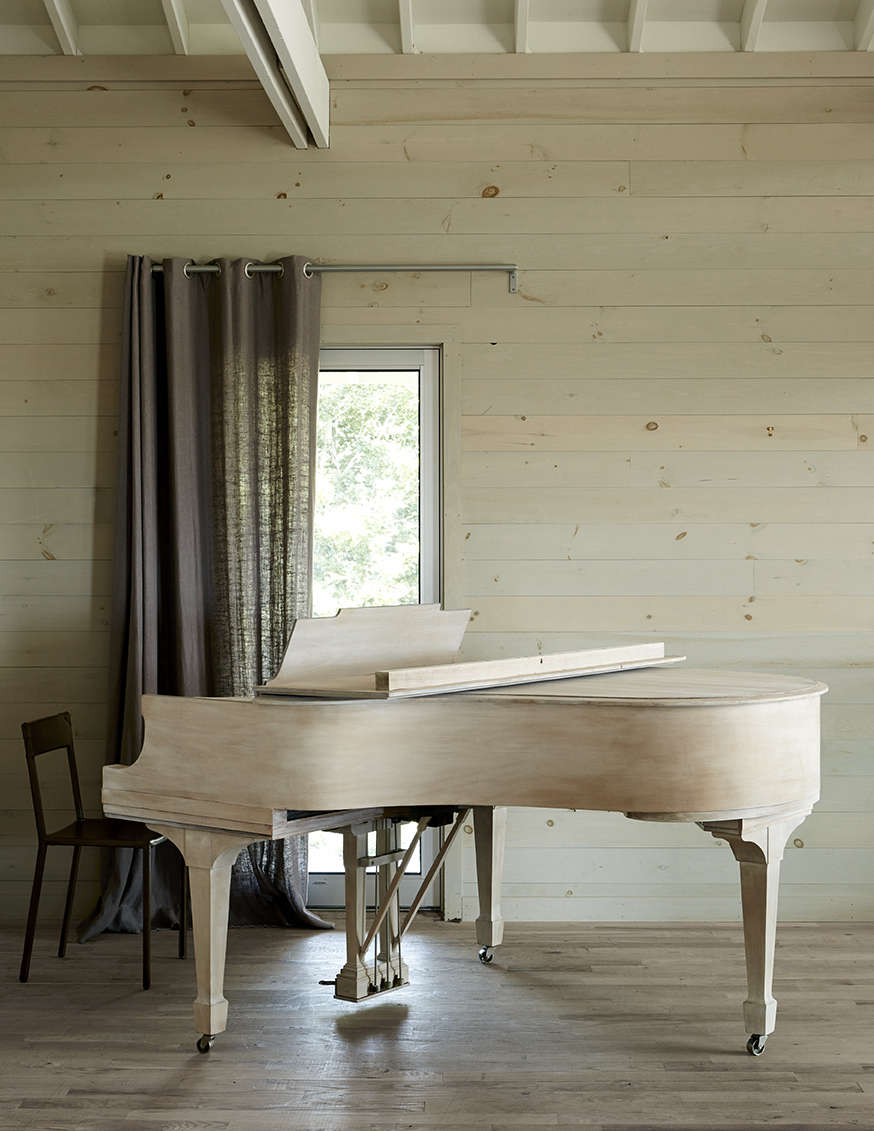 Above: Andrew’s 1928 Steinway made the move–but first had its dark brown French polish removed and was bleached “to make it more beachy—a sacrilege to many, I know, but I’ve had it for ages and the only time I get to play is on the weekends.”

The house’s paneled walls of America Eastern pine—a nod to what had been there originally—are lightened with Andrew’s “magical formula: add one part Farrow & Ball Hardwick White to six parts water and a dash of any old bright white paint.” To prep the walls, he wears rubber gloves and sponges on a mix of 50 percent bleach and 50 percent water—”this opens up the grain and after letting it dry for a bit, it receives the wash well.” The floor—”the least expensive three-quarter-inch unfinished, unsanded American red oak”—received the same treatment, plus water-based polyurethane. “Thanks to people coming and going with sandy bare feet, it’s quickly developed a nice soft gray patina.” 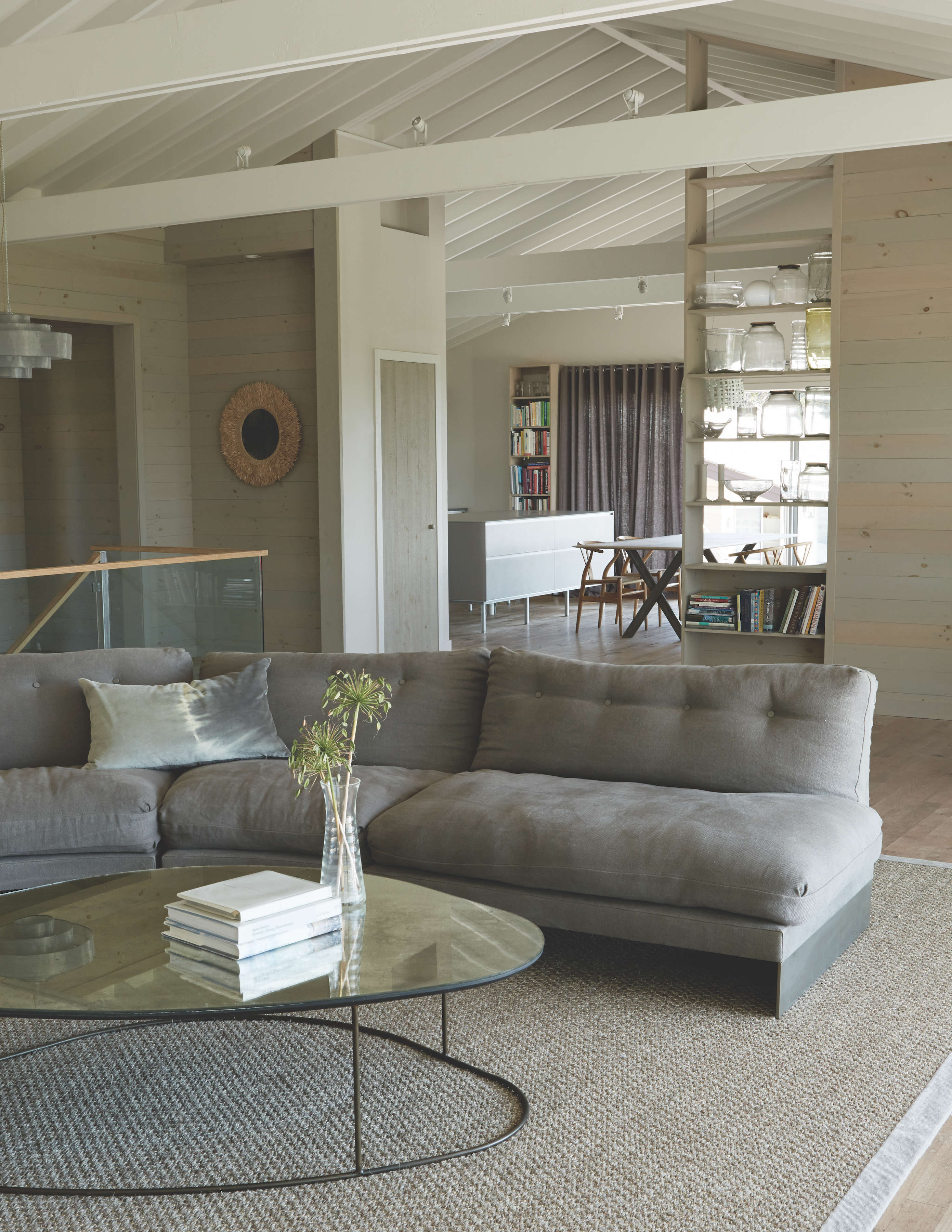 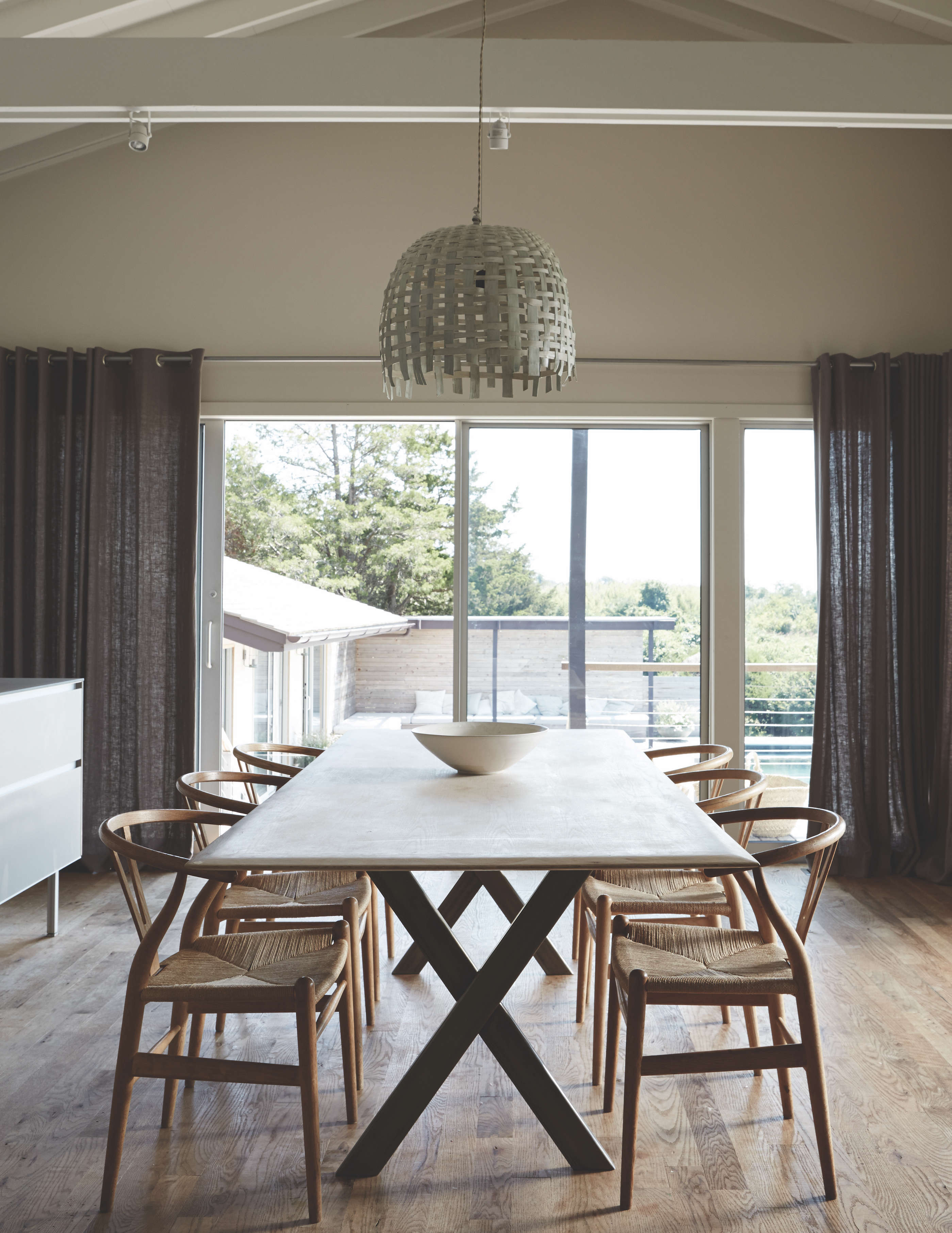 Above: Andrew created the steel-legged dining table for the house, and then put it into production: It’s Canvas Home’s Broome Street X-Base Table. The hanging light is by Hudson Valley star basketmaker Jonathan Kline: After admiring his basket work, Harriet asked if he’d try his hand at shades; Ochre now offers the lights on request. 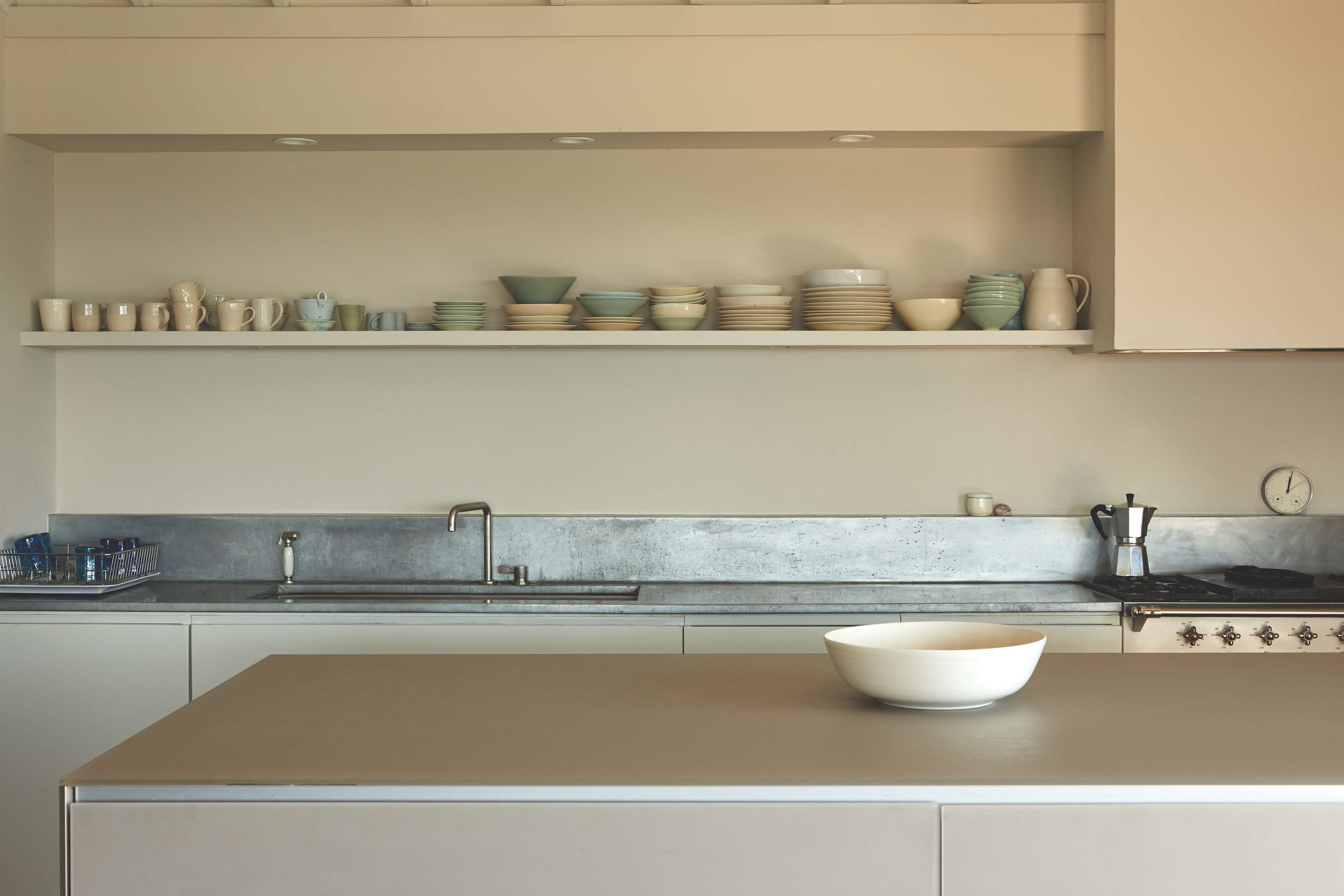 Above: Our favorite room in the house is the minimalist kitchen in a seashell palette. The island is by Valcucine and has a vitrified glass top and aluminum frame. The range is a Lacanche (see one just like it in Beth Kirby’s Star Is Born Kitchen). Andrew worked with a metal shop to make the powder-coated steel cabinets—”they’re the closest match based on Pantone to Farrow & Ball’s Cornforth White”—and zinc counter, which accommodates Harriet’s requested extra large and deep sink. 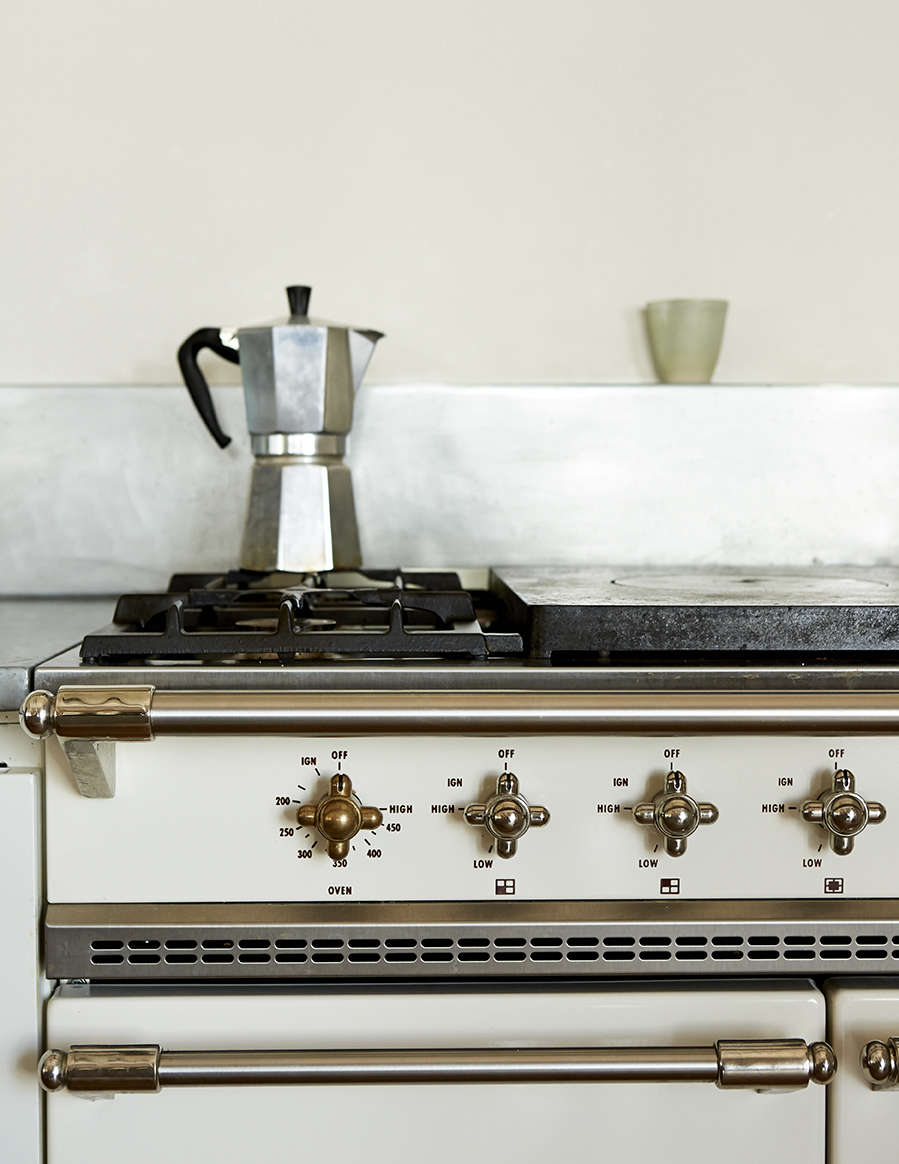 Above: “In addition to being a thing of beauty, it’s so lovely to use,” says Harriet of their Lacanche, which has a large central griddle. The zinc counter rises to form a 10-inch-tall backsplash. 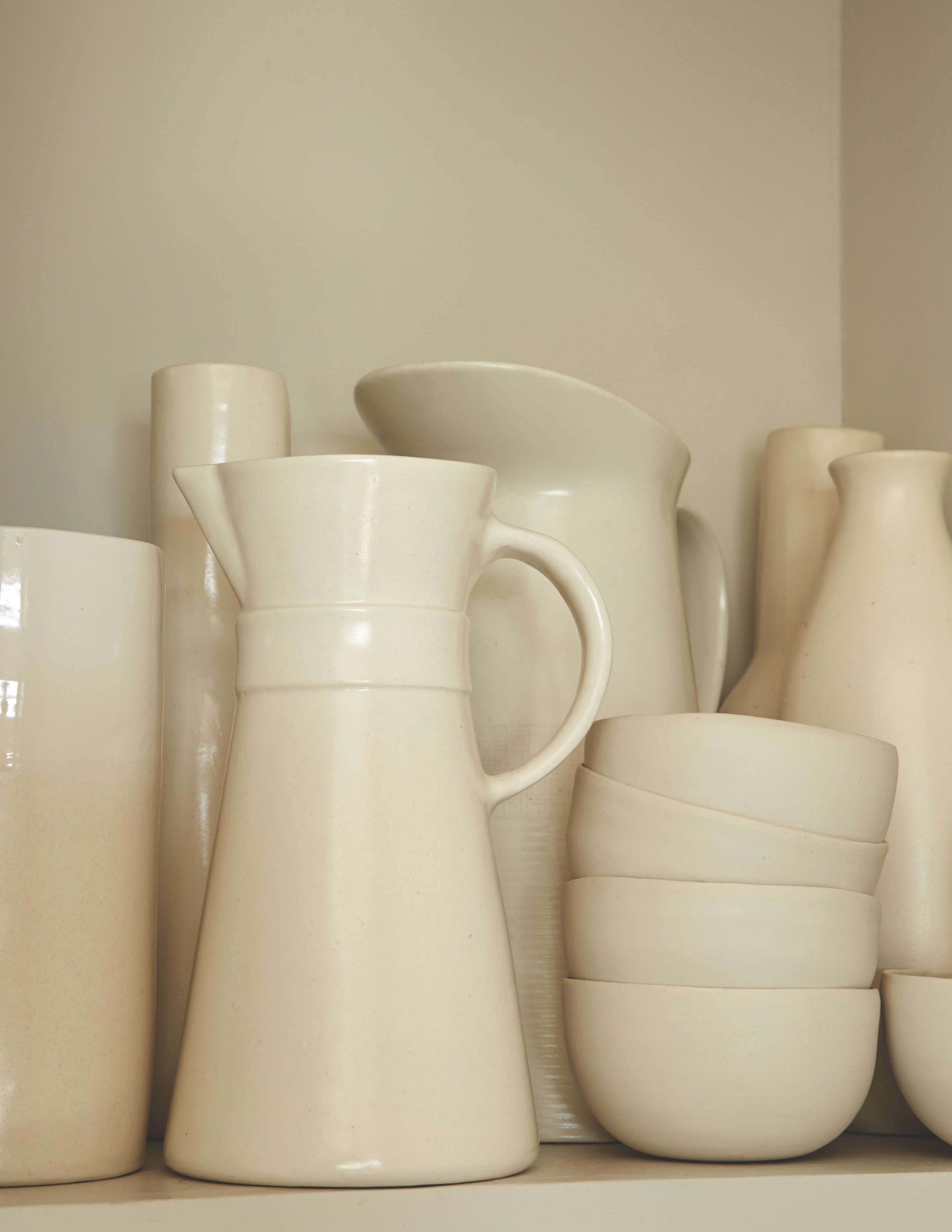 Above: A shelf is layered with prototypes for Canvas Home’s Morandi collection, an homage to painter Giorgio Morandi. 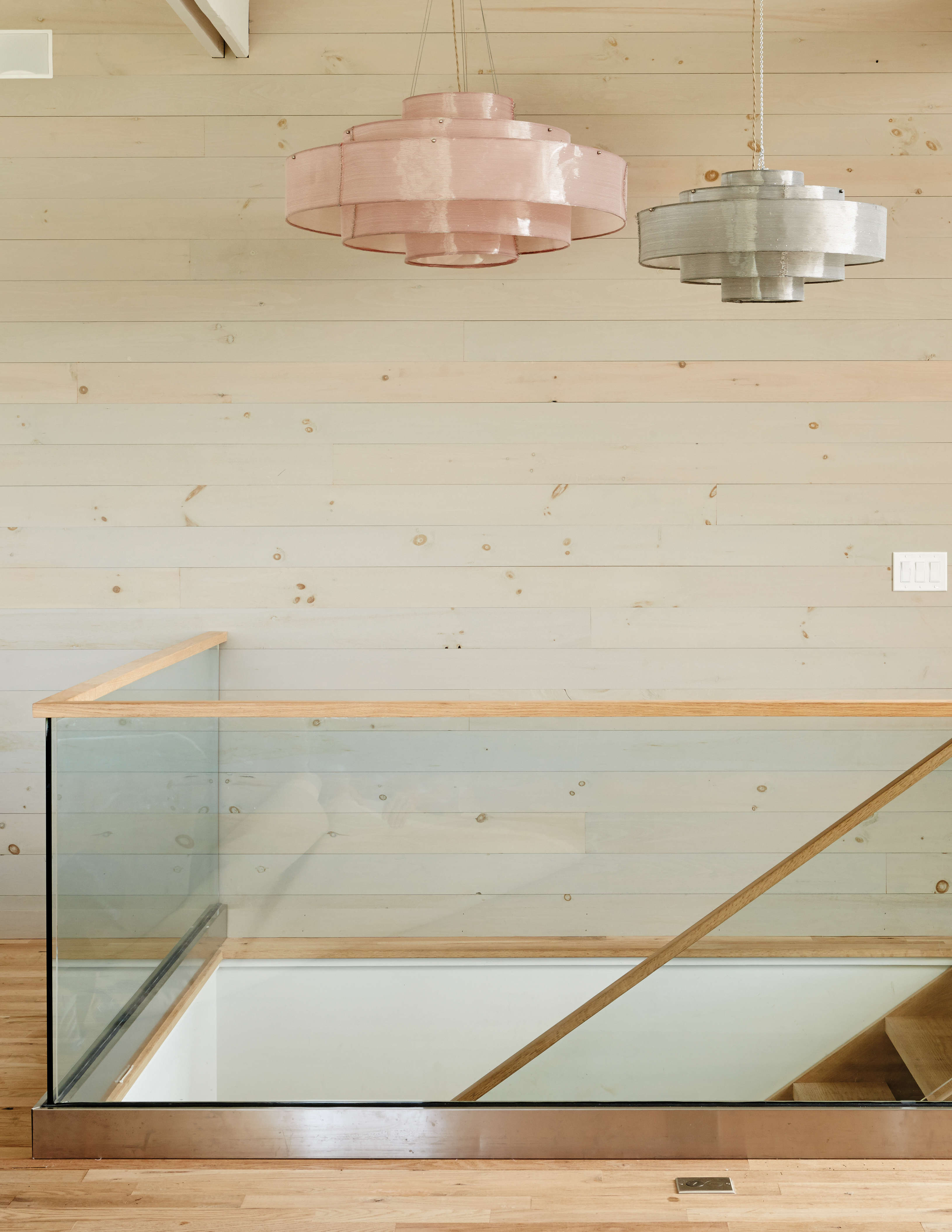 Above: More prototypes—of Ochre’s Cloud Shades in Old Rose and Graphite—hang over the glass stairwell. “We priced out a finished glass stair and it was horrendous, so we did it à la carte,” says Andrew. “I was feeling empowered to experiment, and John Yeaman, our engineer, really loved the challenge.” 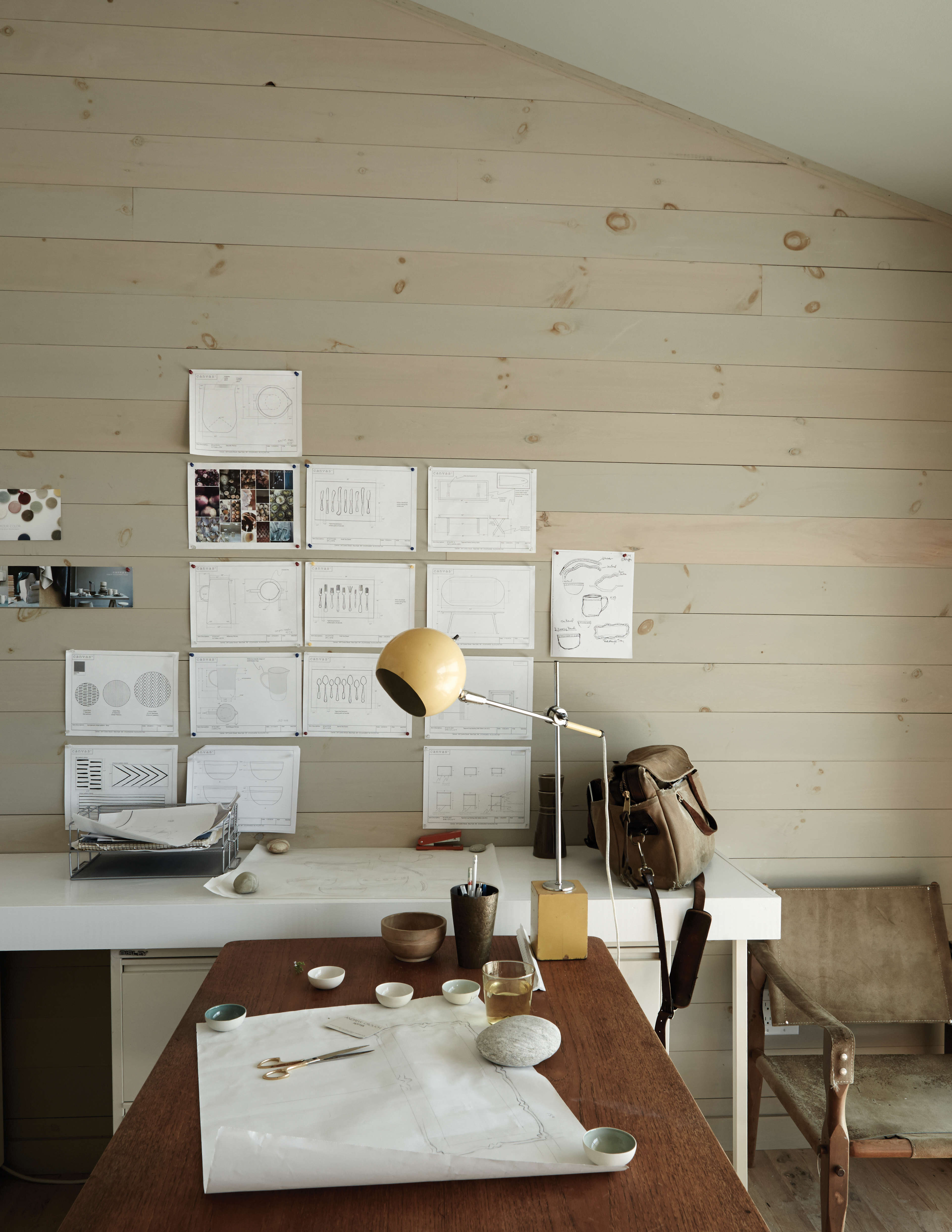 Above: Andrew’s office is situated in the new pool house, which the couple also fitted with a guest room. 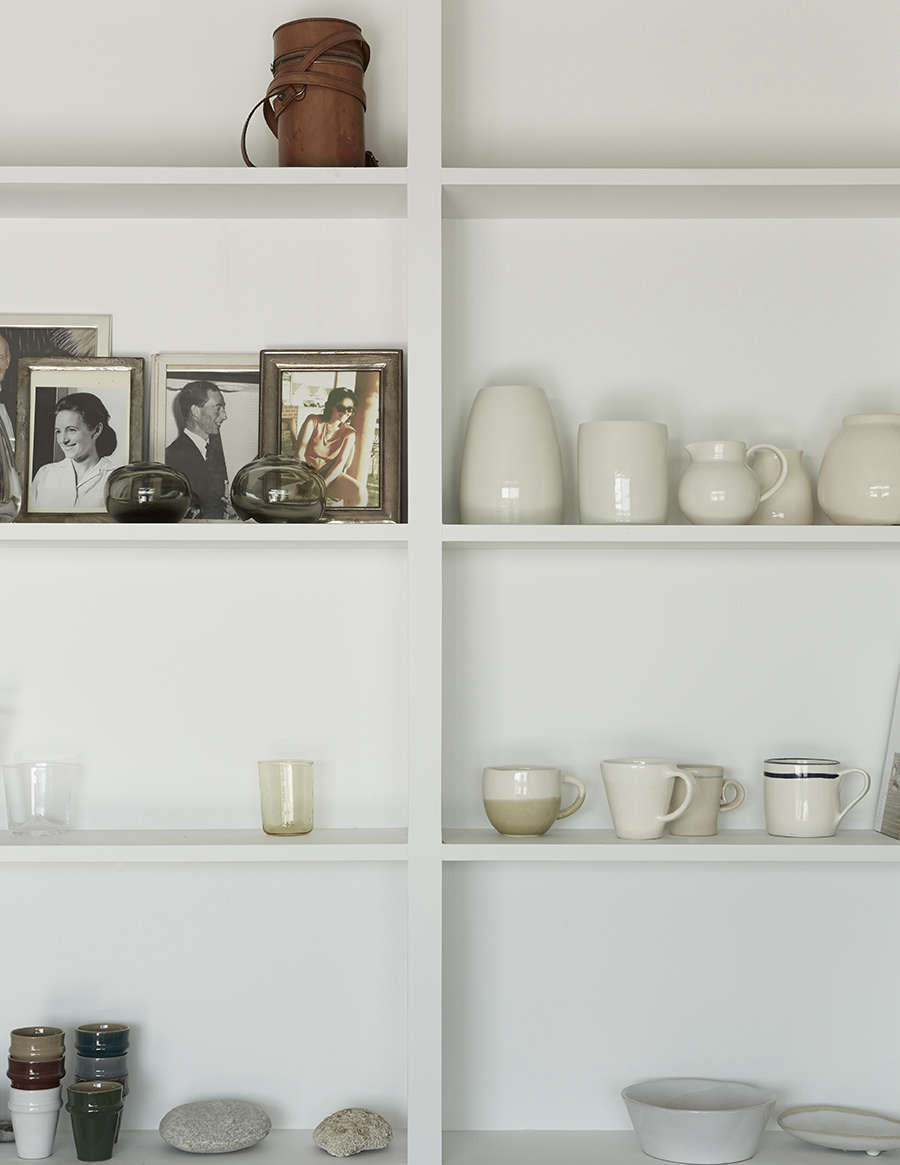 Above: Canvas Home ceramics displayed on classic beach house shelving. “My pieces are less sophisticated and expensive than Harriet’s,” says Andrew, “but they share a sense of proportion and trying to keep things honest.” 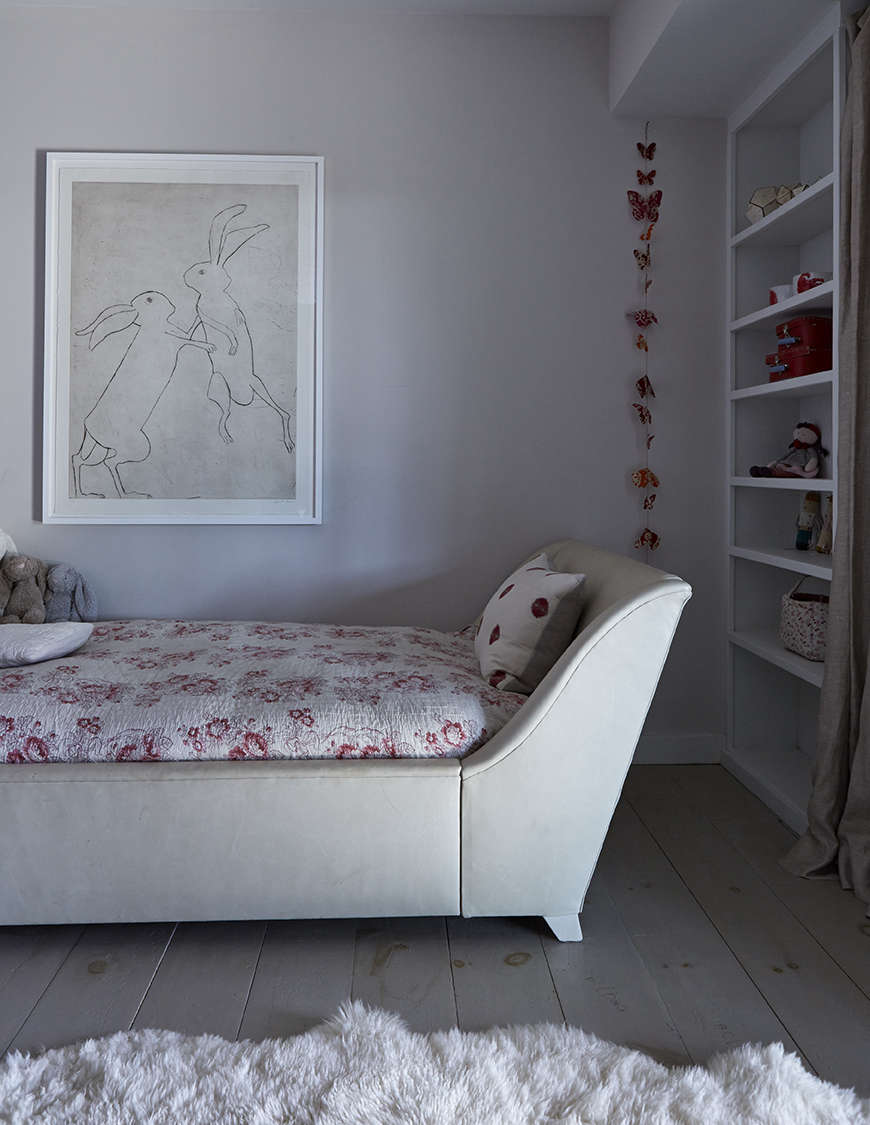 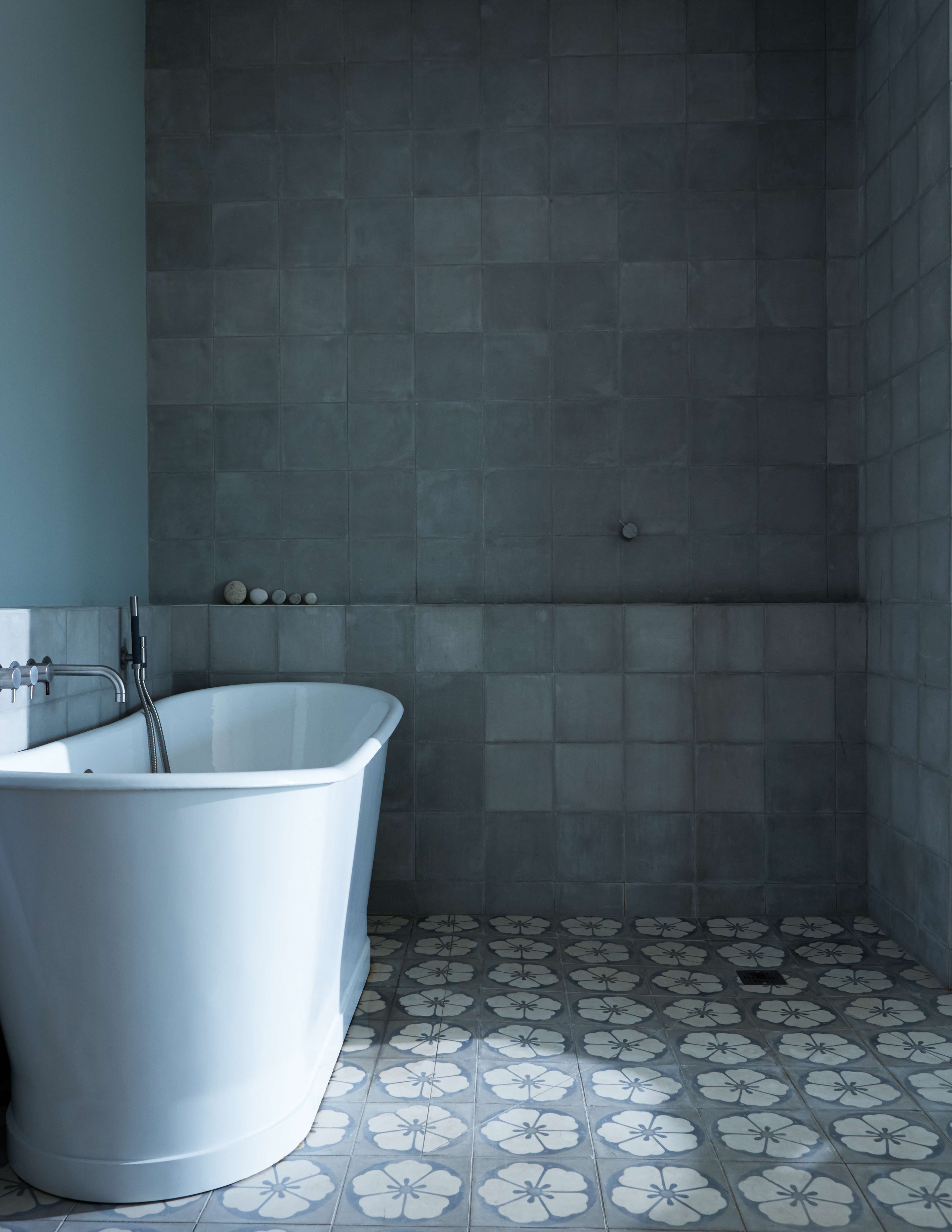 Above: The master bath’s Moroccan cement wall and floor tiles were custom made by Emery et Cie of Belgium and introduce the only pattern in the house. The soaking tub is the Piedmont by Sunrise of California.

Above: The master bedroom has a Canvas Home oak bed and side table. The tie-dyed pillow is by Kirsten Hecktermann. The walls are Farrow & Ball’s Light Blue: “I wanted a color that’s gentle and calming,” says Harriet. The sconces are Ochre’s Scorpion Wall Lights of spun copper with movable metal shades. 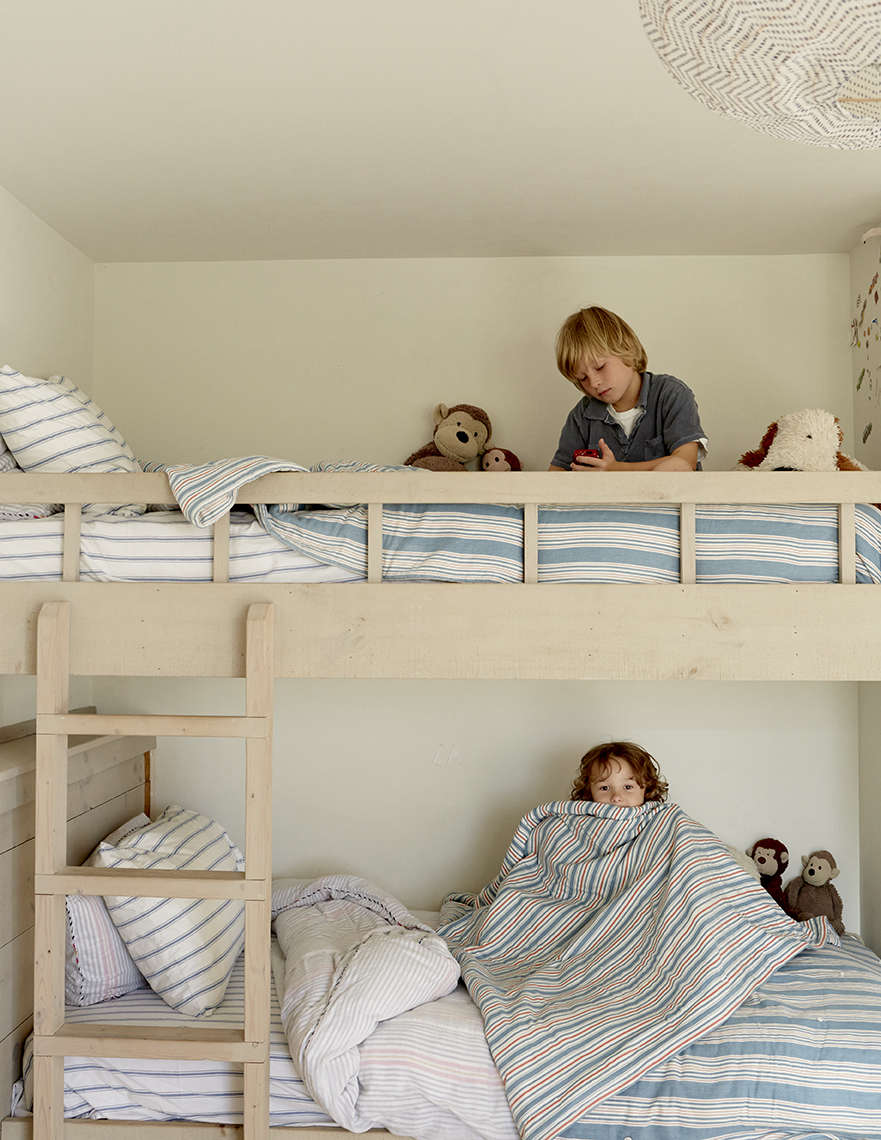 Above: The boys’ pine bunk was built by the couple’s carpenter and treated with Andrew’s wood wash. The striped bedding is all from Canvas Home—but, alas, no longer in production. 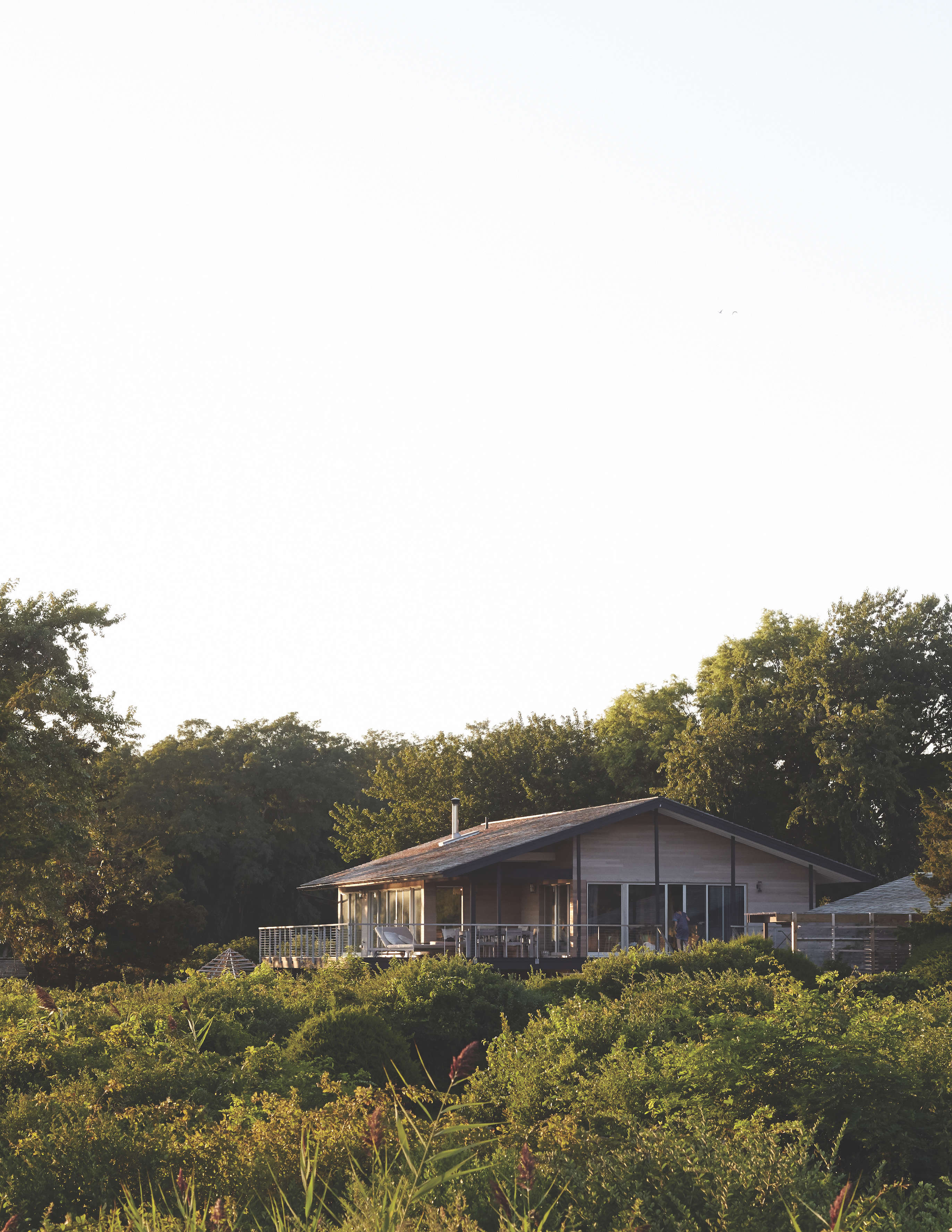 Above: The house and pool house viewed from the garden path that leads to the beach. Rising out of the wetland’s vegetation—bayberry bushes, honeysuckle, and phragmites grasses—the structure is built out of white cedar, a center-match wood with no visible graining. “Buildings in the northeast are notable for their use of wood and we embraced that venacular,” says Andrew.

See the garden, pool and green roof included, on Gardenista.

Back to Nature: The Appeal of Linseed Paints

Kitchen of the Week: Indoor-Outdoor Cooking in Sydney