Fifteen years ago, when Jane Hedreen launched her Seattle-based children’s clothing line, Flora and Henri, she was a lone voice advocating for simple, European-inspired children's wear in 100-percent cotton and non-lollipop shades.

Hedreen helped inspire the current revolution in children’s clothing design, and she continues as a leader in the field. She and her real estate developer husband, David Thyer, have three kids, ages 21, 18, and 11, and live in Seattle’s Capitol Hill in a grand 1910 house that takes up six city lots and was once occupied by a US senator. Most of the house is original—“the majority of our work has been cosmetic,” says Hedreen. “When we bought it, every room was pink and mauve." And, like the Flora and Henri line, the interiors manage to have nostalgic overtones while also feeling up to date.

N.B. To see the grounds, go to A Verdant Garden in Seattle.

Above: Jane's youngest daughter, Frances, 11, mans the front steps in a Flora and Henri silk Fancy Dress made in Spain (the line's sizes go from newborn to 12). The house's Italianate details, such as the stuccoed arched entry, Juliet balcony, and colonnaded French doors, are courtesy of a remodeling that took place in the 1920s for a senator who wanted a Palladian villa. 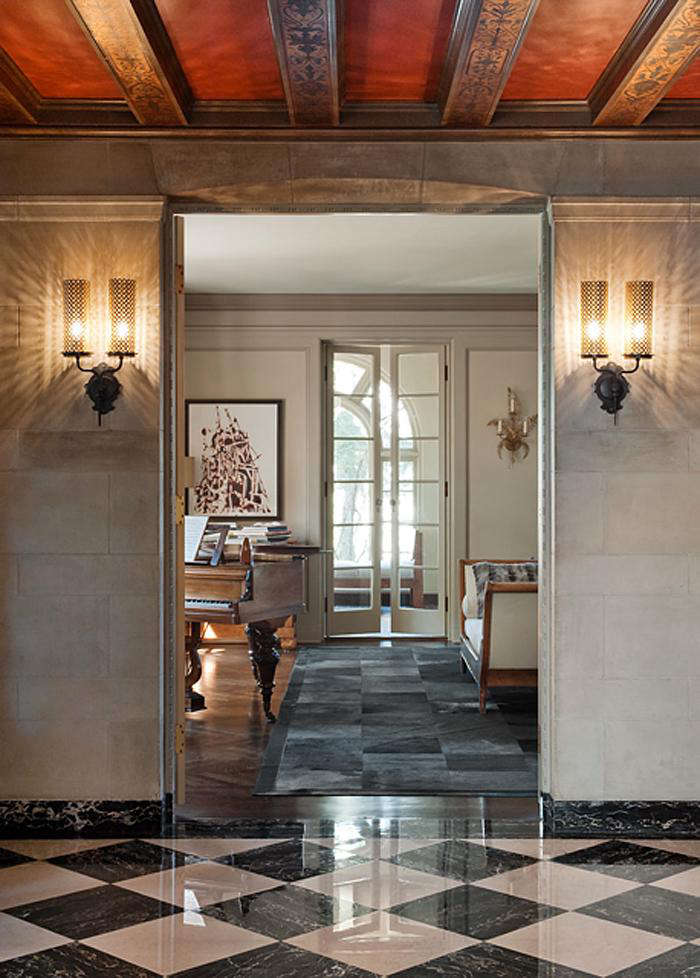 Above: Nineteen-twenties sconces in the front hall cast a radiant light, thanks to shades that Jane says appear to be made from the same perforated metal sheeting used for radiator covers. The living room has an old French grand piano and sofa and a hard-wearing patchwork cowhide rug from Edelman Leather. 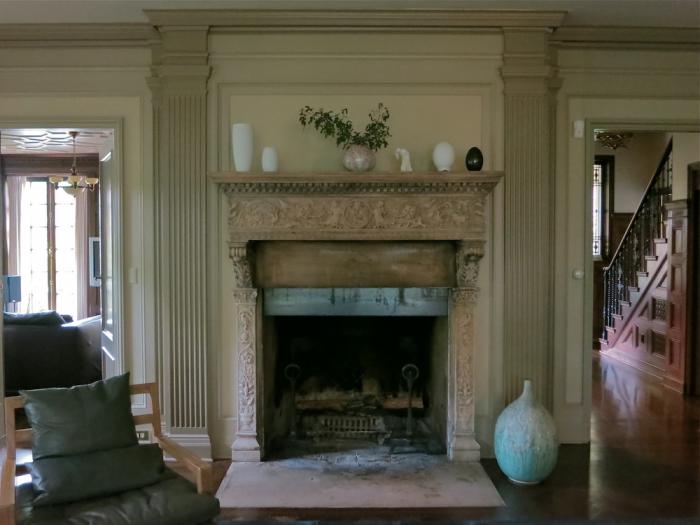 Above: The living room's carved sandstone mantle surrounds an often-used fireplace. Jane's porcelain collection crops up throughout the house; she has a particular soft spot for Ted Muehling'a egg-shaped vases made by centuries-old German manufacturer Nymphenburg. 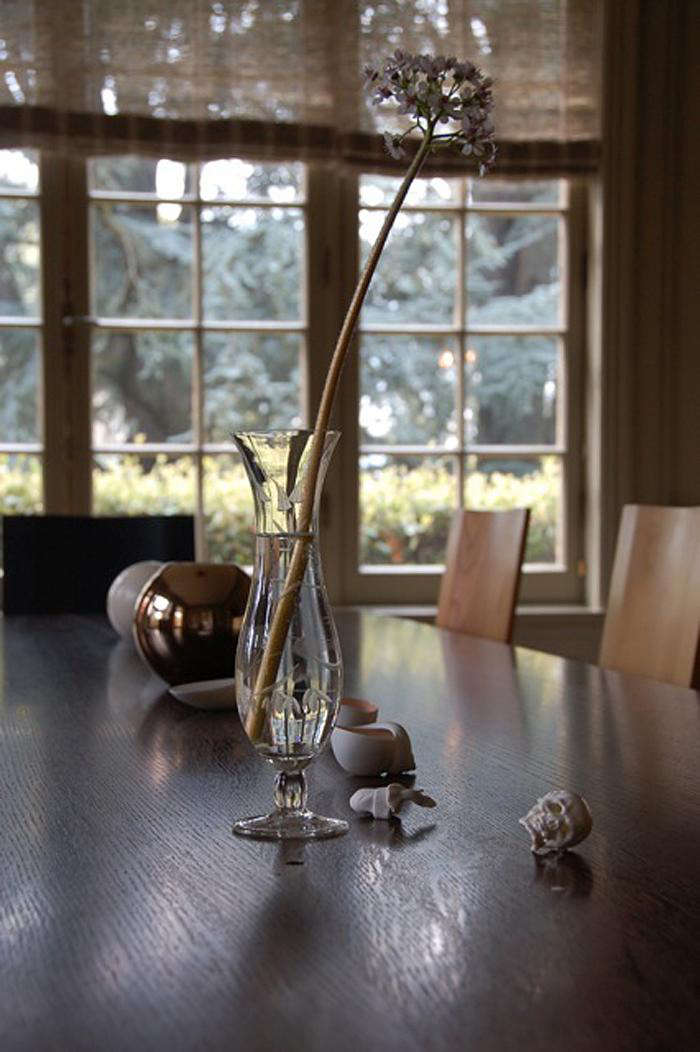 Above: An updated Dutch still-life: a long-stemmed Allium from Jane's garden in an antique etched bud vase stands alongside Ted Muehling porcelain seashells and a Nymphenburg porcelain arm and miniature skull. The walnut table and chairs (each of a different wood) are by fellow Seattleite Roy McMakin. 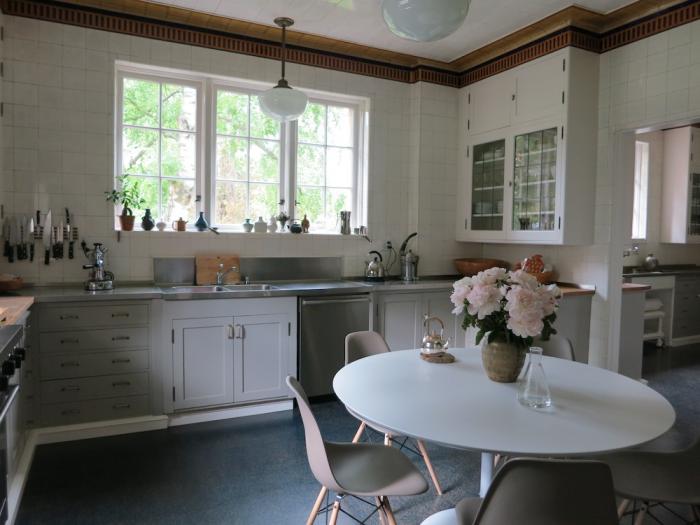 Above: The eat-in kitchen and adjoining pantry are almost entirely original. They have storage cabinets and drawers galore, and the walls and ceilings are entirely tiled. Jane's husband ripped out the Formica counters and discovered butcher block and stainless steel underneath (all they had to do was some sanding and patching). In place of a beat-up linoleum floor, they installed an eco-friendly cork and rubber floor in dark blue from Capri. 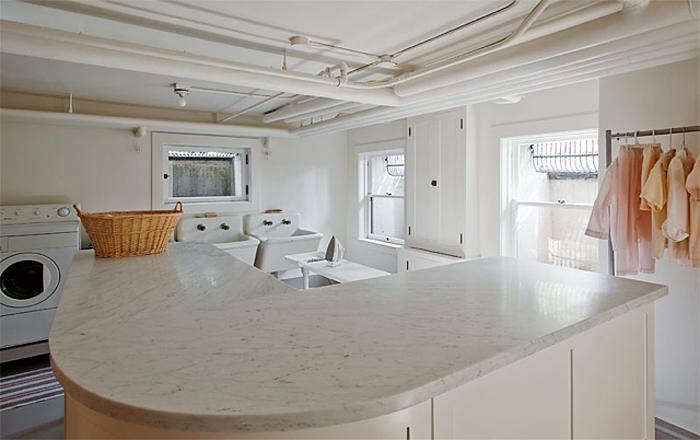 Above: Marble isn't confined to the public spaces—when Jane closed Flora and Henri's LA store, she moved the Roy McMakin-designed counter to her laundry room, which also has three original porcelain washing sinks, plus a new mangle that Jane uses to press tea towels and bed linens. 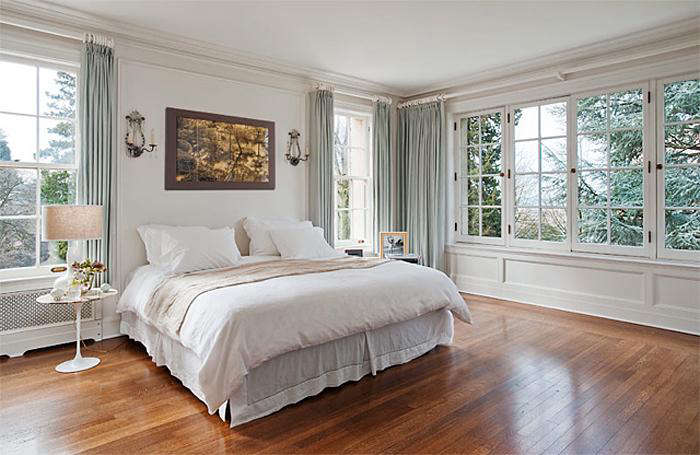 Above: The master bedroom has wall-to-wall views of the blue atlas cedars out front. The pale blue-gray linen curtains, along with the wood curtain rod and rings, are by Roy McMakin. The bed is draped with a linen-backed goat skin blanket, a souvenir from a trip to Paris. 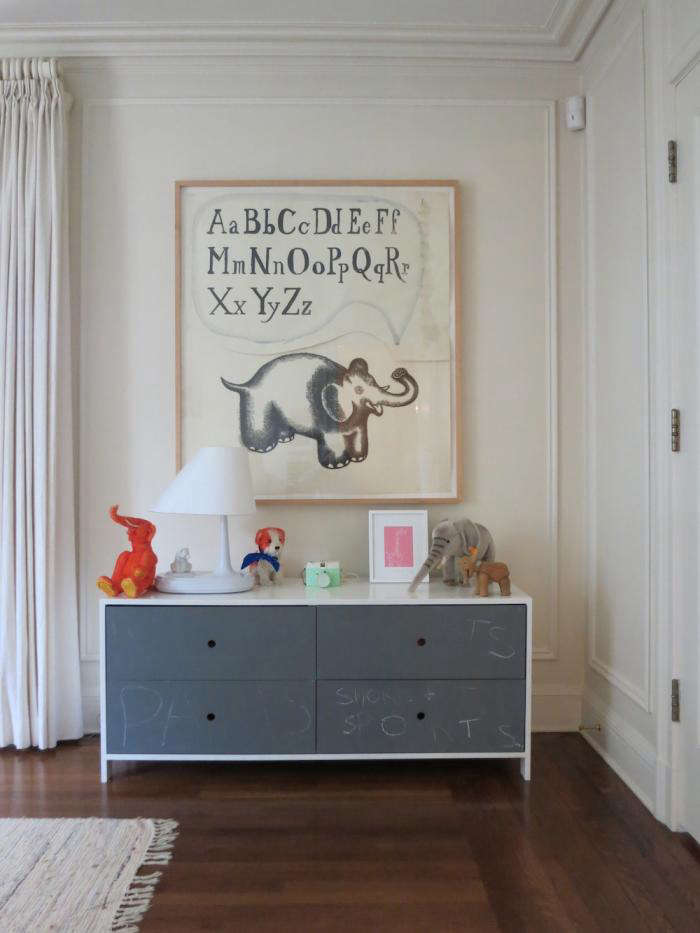 Above: A chalkboard painted dresser from Duc Duc and a framed ink drawing by Jeffry Mitchell in Frances's room. The lamp is from Lladro's ReDeco series. 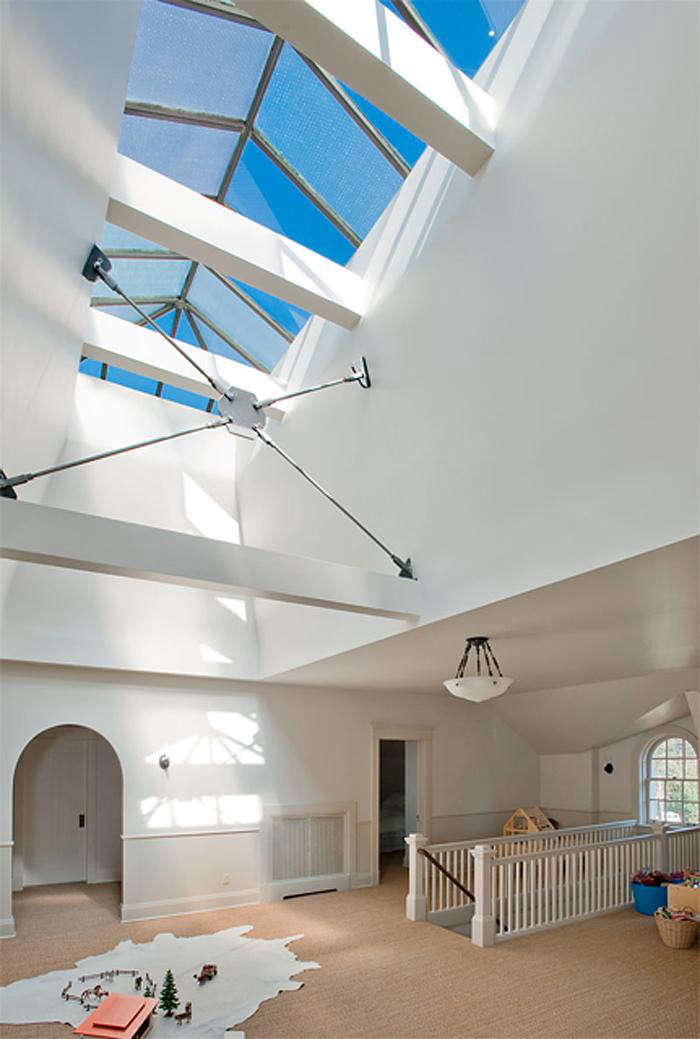 Above: The attic's peaked skylight had been covered over. Jane "liberated" it, added trussing so that the ceiling could be left entirely open, and turned the space into a seagrass-carpeted playroom. 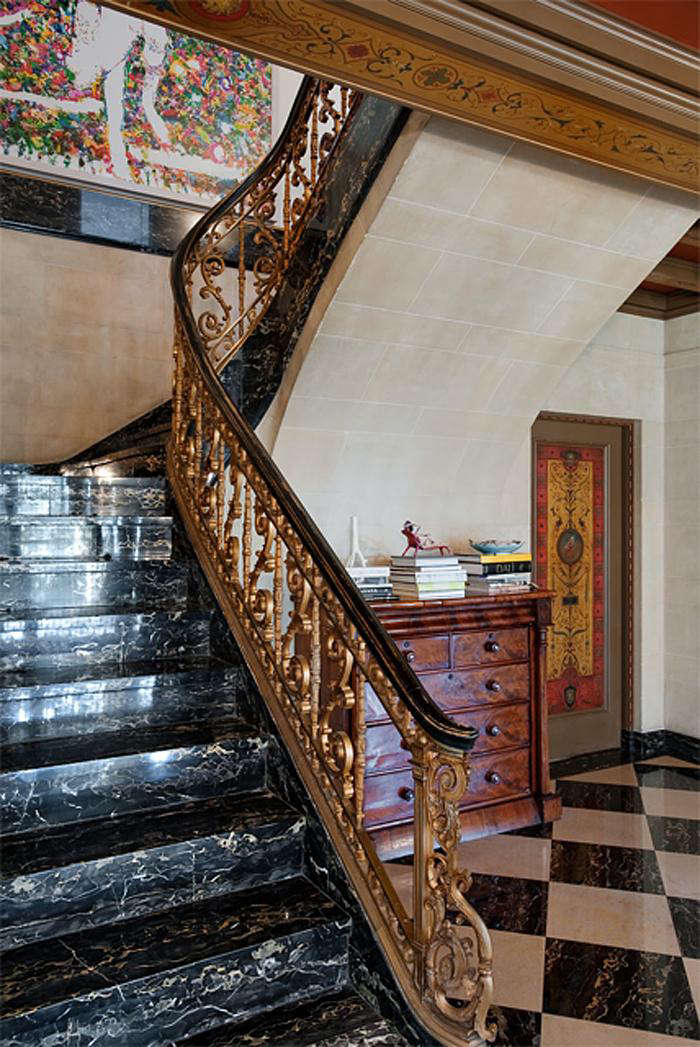 Above: The front entry has a checked marble floor that retains its high sheen (all it requires is mopping with water) and black marble stairs with a scrolling gilt bronze baluster. The walls are plaster made to look like blocks of sandstone. The artwork is a giant photo by Vik Muniz of Alice Liddell created from dime-store toys. 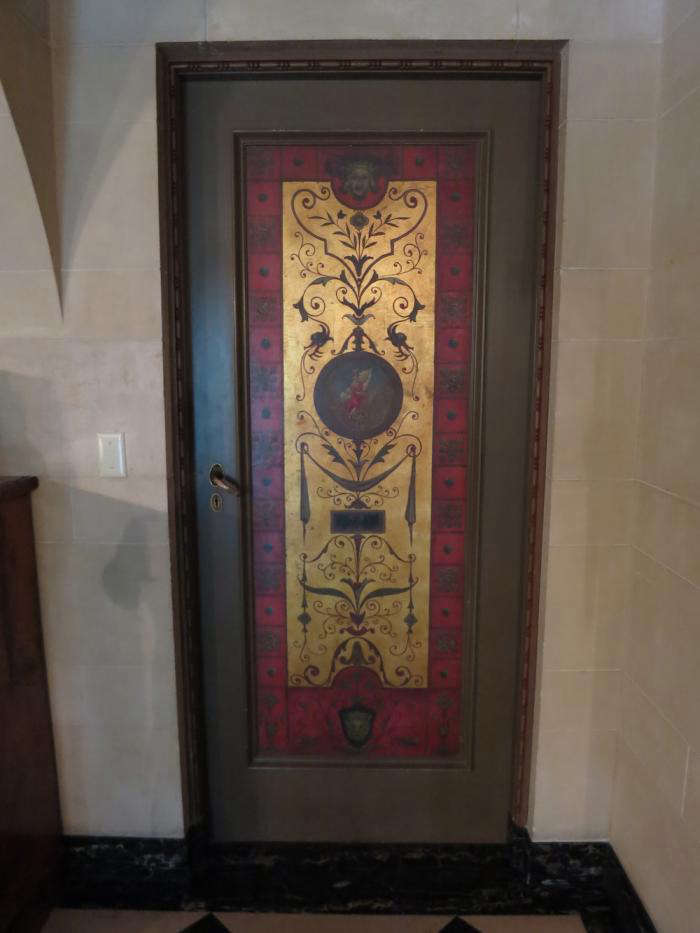 Above: The door to the service corridor (kitchen, powder room, and basement) is inset with painted and gilded neoclassical imagery. It was restored by the previous owner, a painter.

English-Style in Seattle: A Couple’s Longtime Home Gets an Anglo Update