When J and J (who wish to remain anonymous) left the advertising world in New York, they headed to Portland, Oregon, with the aim of creating something like the TriBeCa loft they had left behind. I met them at our Remodelista Market in Portland during their first week in the city. That was three years ago, and they had just bought a one-story, nondescript industrial building on top of which they planned to build a warehouse-style living space. Fresh from Manhattan, they were enthusiastic about their new hometown, and the feeling has since only grown: “We are crazy about this city. At its core is a young, creative spirit driving an amazing food, fashion, and retail scene. Here, you can be local and buy local; everything we sourced for the loft came from Portland retailers and artisans.”

Local history informed the look of the loft, too. It’s located in Southeast, Portland, near Ladd’s Addition, the city’s oldest planned residential development, now a historic district. (The couple themselves owned homes for over two decades in Florida’s groundbreaking planned community, Seaside, where they were exposed to New Urbanism and leading American architects.) Another inspiration is the nearby 1914 Ford building, originally an assembly plant for the Model T, sensitively adapted for use as creative offices and retail space by Emerick Architects of Portland, the firm that J and J hired for their own place. The architects were given a mandate: to create a net-zero-energy loft—meaning it generates all the energy it consumes—that looks very much at home in its setting.

Photography by Lincoln Barbour, except where noted. 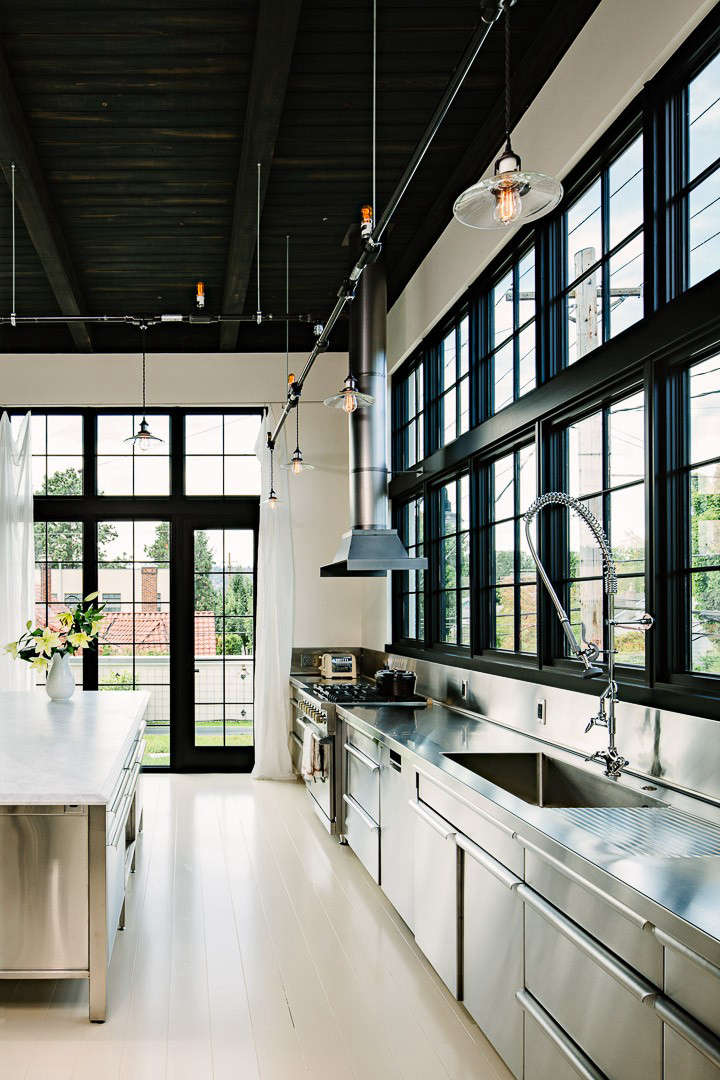 Above: The loft was built atop a one-story structure with an 8,000-square-foot footprint. An 11-foot setback was required for the addition, and this area became a wraparound terrace and garden. Factory windows were used to create a sense of history. In the kitchen area, the owners sourced a stainless kitchen counter and units with an integrated draining board from a restaurant supply company. They note, “The best counter is stainless; it gets a great old patina and you can put anything on it, from blueberries and lemon juice to hot and cold plates.” The architects designed the industrial custom hood in keeping with the look. (For more on stainless counters, see Remodeling 101.) 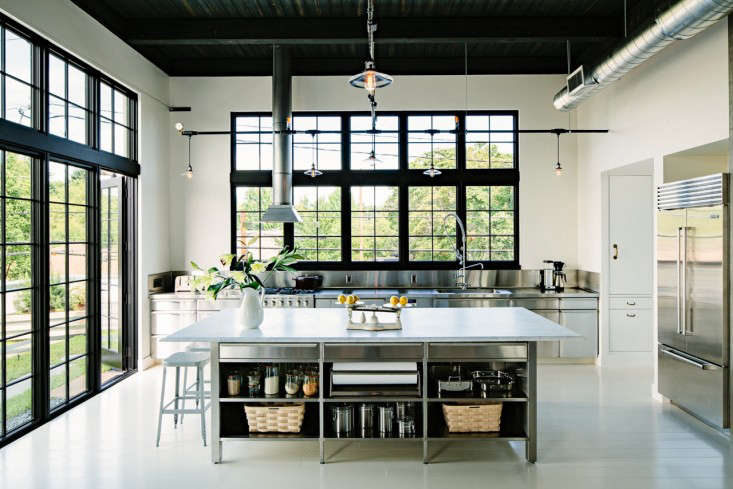 Above: The stainless steel kitchen island is topped with Carrara marble, chosen because, as one of the Js explains, “I wanted it to look like a 1924 Paris baking table.” To give it a worn patina, the marble is honed rather than polished. The ceiling lighting is based on the idea of an old sprinkler system; Emerick Architects enlisted the help of local company Schoolhouse Electric to help in the execution. 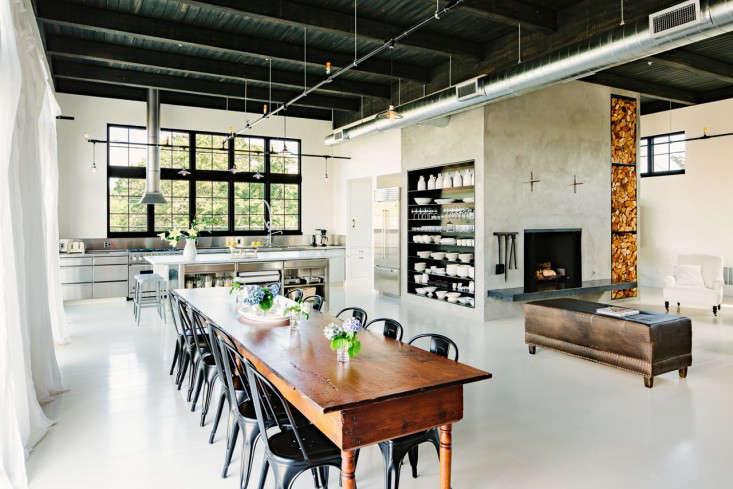 Above: The loft’s floor is Douglas fir painted a very warm vanilla cream–the painters had to be persuaded not to fill the natural knots and dings in the floor and to leave it with a weathered look. The wood on the ceiling was stained to replicate the look and feel of the original, and tar paper tacks from the roof were added for an industrial look. The harvest table was sourced from Seek the Unique and originally sat in Oregon’s Aurora Historical Society. The built-in open metal shelving houses Fishs Eddy dinnerware mixed with old ironstone and clear glassware. 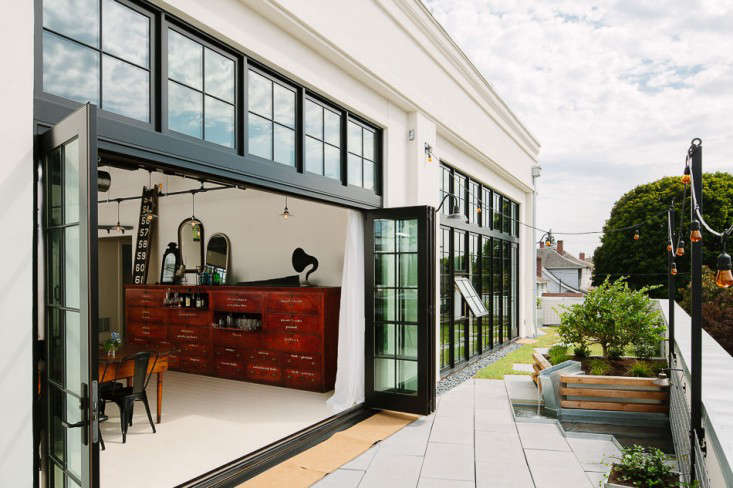 Above: A 13-foot-wide-opening with accordion doors connects the dining area to the terrace and allows for indoor-outdoor living; the Tolix chairs are often brought out for pre-dinner drinks. J and J explain, “The inspiration for the penthouse came from living in a loft in TriBeCa. We always loved loft living, but in New York, if we wanted to enjoy the outdoors, we had to ride down the elevator and go to a public space. We wanted to incorporate outdoor space and Portland’s lush greenery into our living space, and essentially bring the outside in.” 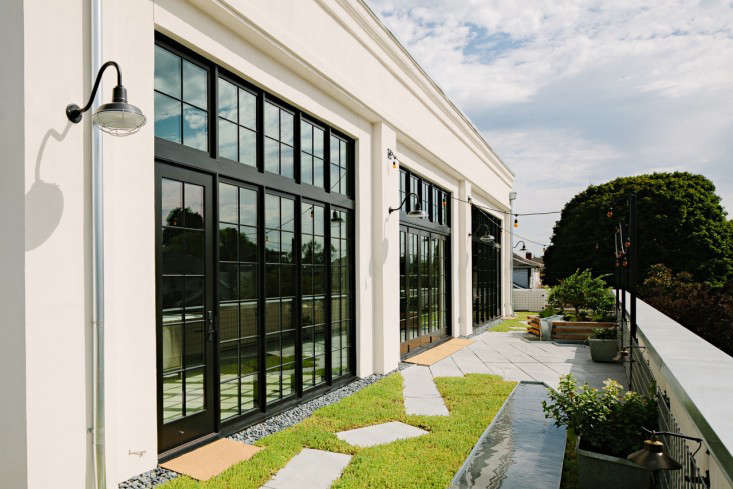 Above: The couple tell us that their wraparound rooftop garden “tends to be a combination of lavender, tall grasses, boxwood, and kitchen herbs with jasmine across the west and south wall, a four-in-one espaliered apple tree on another wall, and a grape leaf arbor very much in progress with sedum as ground cover.” Solar panels on the new construction make it a net-zero-energy building. 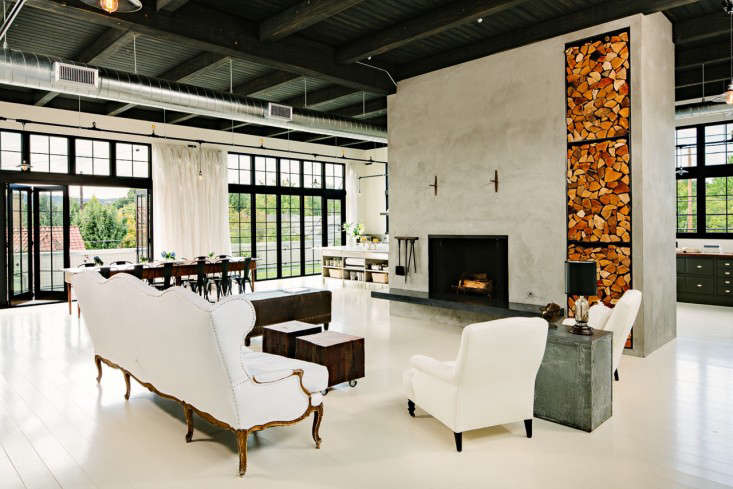 Above: The loft has two concrete masses that anchor the space, one that houses the fireplace, the other the elevator. Two shelving brackets above the fireplace serve as an architectural detail and are used to hang seasonal floral displays by Portland florist Anna Mara. The owners enlisted local metalworker Aaron Busch, who made the brackets, to fabricate the fire tools that hang from the wall by magnets. The nine-foot-long wingback sofa is from a hotel lobby; the armchairs are by Cisco Brothers, an LA company on the vanguard of using green materials and methods in its furniture. The 18-inch-square coffee tables were made from an Oregon farmhouse beam by Salvage Works in Portland. 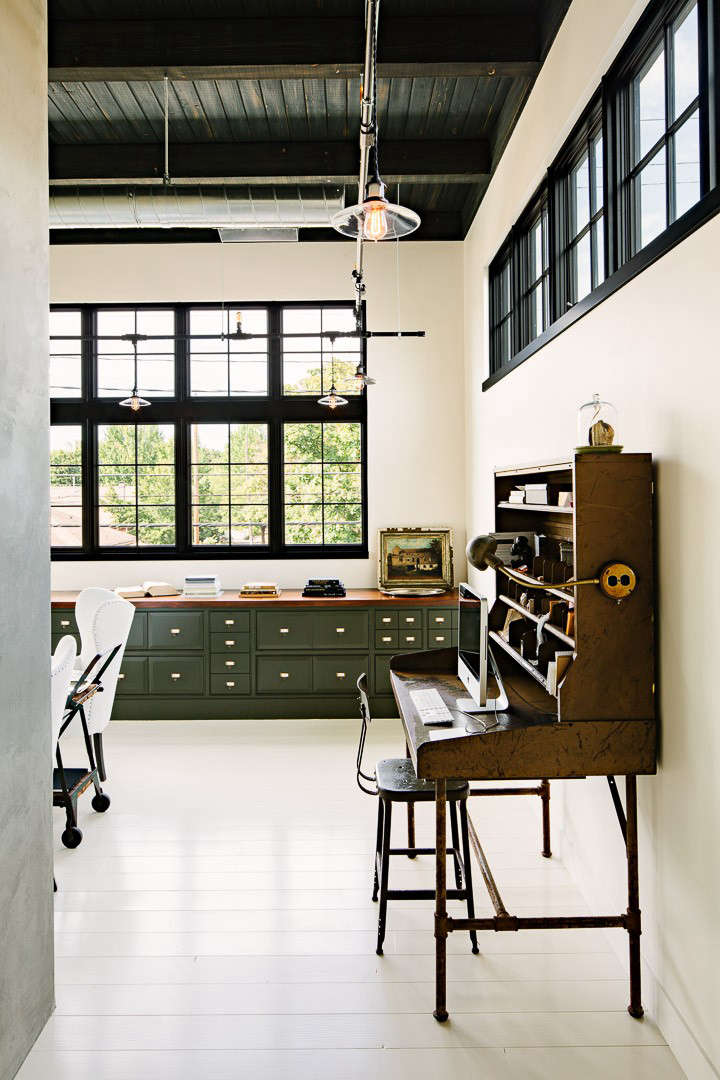 Above: The library-office area is anchored by a custom 16-foot-long counter with a walnut top sourced from nearby Tillamook; the drawers hide everything, including a printer. 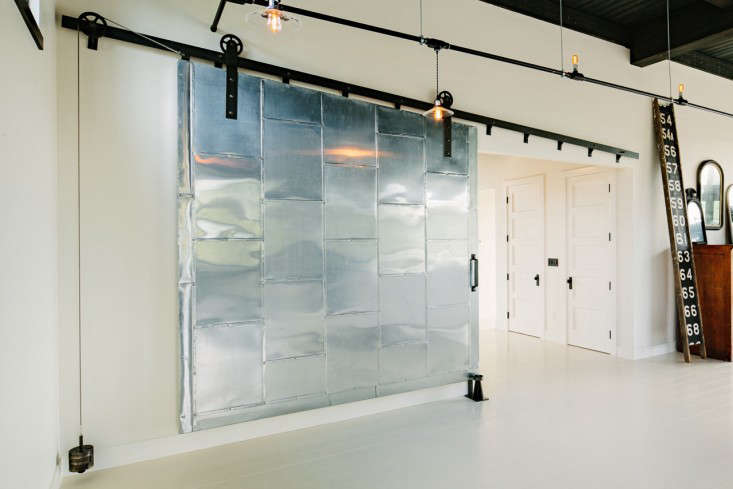 Above: In keeping with the warehouse vernacular, the living area is separated from the bedroom and bath by a sliding fire door. In lieu of the traditional kickstand to prop open the door, a pulley-and-weight system was created. 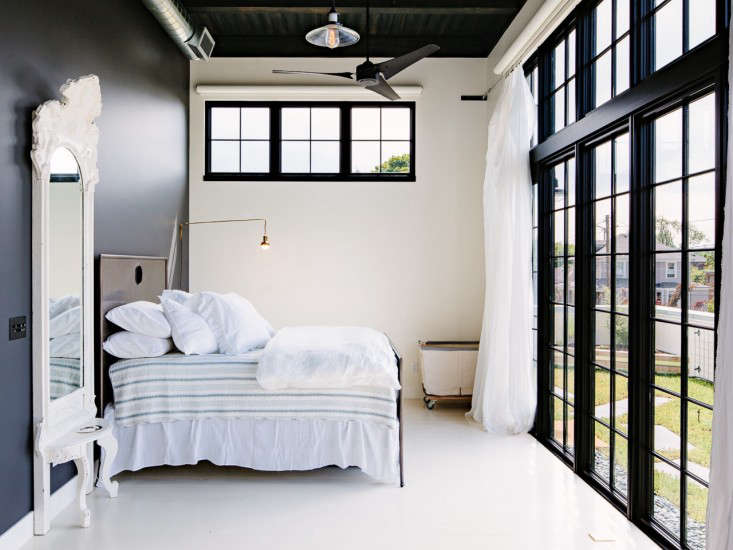 Above: In the master bedroom, the backdrop wall is painted Cracked Pepper from Behr, the only color in the loft. In the corner, a Steele Canvas Basket is used for stowing the bed’s extra pillows at night. The bed linens are from Matteo, and the couple created their dust ruffle from a king-size sheet: “We prefer it to a store-bought dust ruffle because you can mush it however you want.” The white filmy curtains used throughout the loft are hung in panels allowing them to be slid open and shut as needed to block the sun. 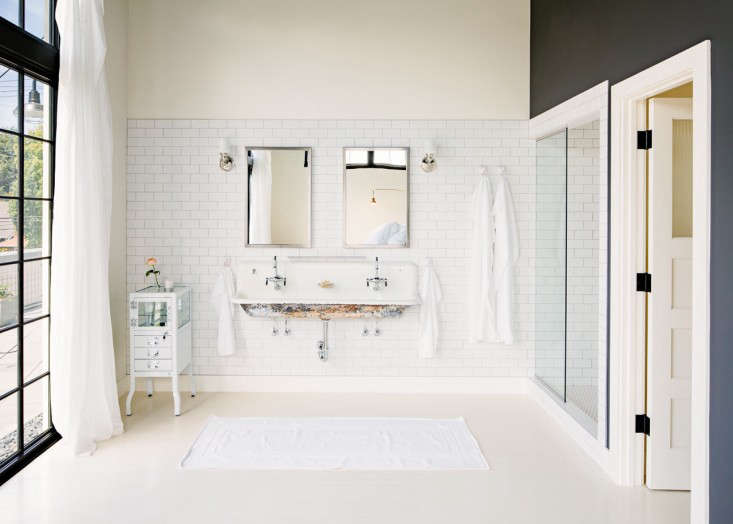 Above: In the bathroom, J and J opted for a salvaged French urinal over a Kohler double sink because it’s thinner and longer in form, though it required the drilling of holes for plumbing. They opted to keep the patina on the bottom of the sink. 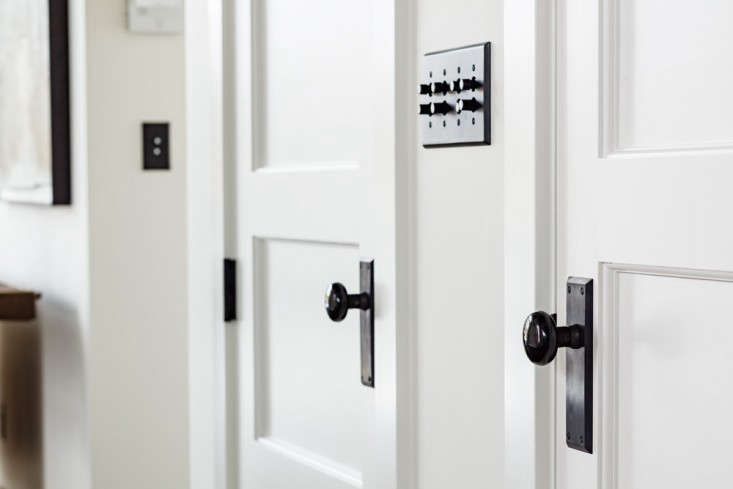 Above: The Black Porcelain Door Knobs and Push-Button Light Switch Plates were sourced from Rejuvenation. 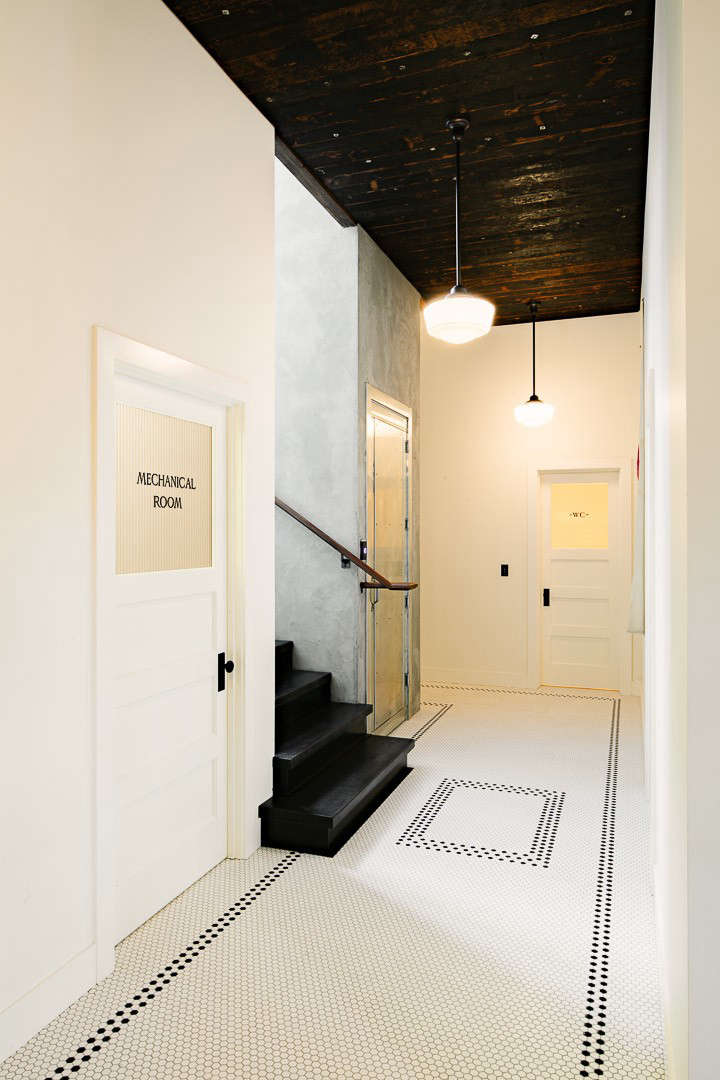 Above: The ground floor of the building houses guest quarters and a laundry room, and leads to the loft. The building’s entry has a floor of classic hexagonal tiles that incorporate a mat. The wooden ceiling was taken from the original roof that had been covered in tar paper but had faced the elements for over 75 years. The couple insisted on using the weathered side because they loved the patina. For the doors, they wanted old reeded glass, but building codes required tempered glass; instead, they were able to source something that looks like historic reeded glass. They hired local sign painter, Pete McKearnan who specializes in historic fonts, to come up with the 1924 lettering that he hand-painted on the doors. Photograph via Emerick Architects.

Heading to Portland? Allow us to point you to our Favorite Places in the city, including the original Ace Hotel, a Shaker-Inspired Portlandia Cafe, Pistils Nursery, and much more. For inspirational lofts the world over, have a look at our Photo Gallery.

From Java, by Way of Oakland: Rattan Chairs from Wend Studio