The 1903 property sits on 85 rolling acres at the bottom of a ravine in Pope Valley, located to the east of Napa; unlike its more glamorous neighbor, the area is a curious mixture of extremes, where trailer homes and cattle sit side-by-side with landed gentry and well-tended horses. Carter purchased the house from the original family of owners, who raised 11 children on the premises; the original property included an array of sheds and barns that have since been converted into a studio and residences. (Carter is both mentor and tutor to several students who live on the ranch.) A former barn houses several wood-burning kilns built by Carter and his students and are used for frequent firings.

Carter’s own work includes large grid installations of tiles with distressed surfaces and rough stoneware clay balls embedded with quartz with fissured surfaces. His artistry extends to his domestic environs, which he has carefully restored in a way that makes the buildings look like they have been there forever. As a former student says, “This place is Carter’s canvas; every detail considered and attended to as part of his daily routine.”

Photography by Douglas Sterling for Remodelista. 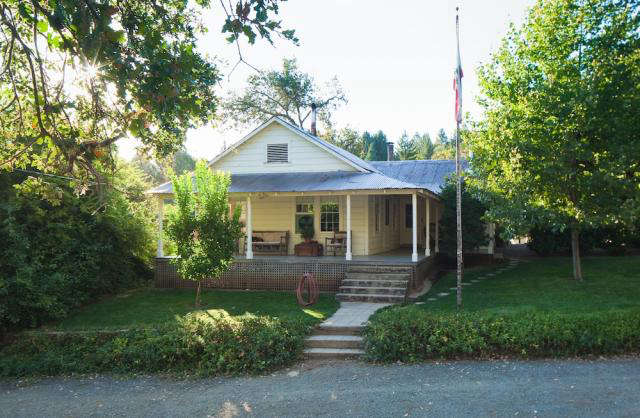 Above: The flag pole was made by Carter from a fir sapling that had fallen on the property. 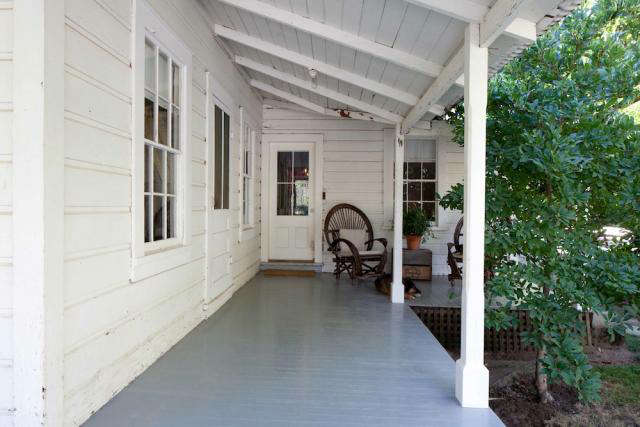 Above: A high performance semi-gloss enamel coating of Devoe paint was used on the deck. It is typically used for metals to prevent rust but works equally well on wood. 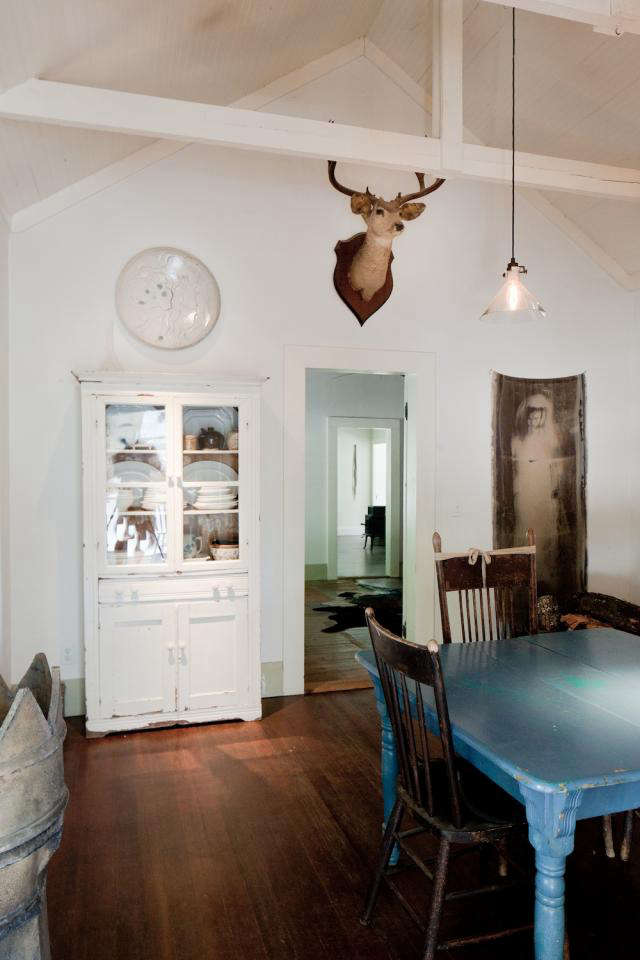 Above: Carter opened up the original flat, low ceilings in the dining and living rooms, revealing the pitch of the roof. He added insulation and then covered them in salvaged bead board. The glass Meridian Pendant Lamp above the table came from Sundance. The Adam and Eve piece on the wall above the cabinet is by Carter’s former teacher and mentor Ken Ferguson, renowned in the field of ceramics. 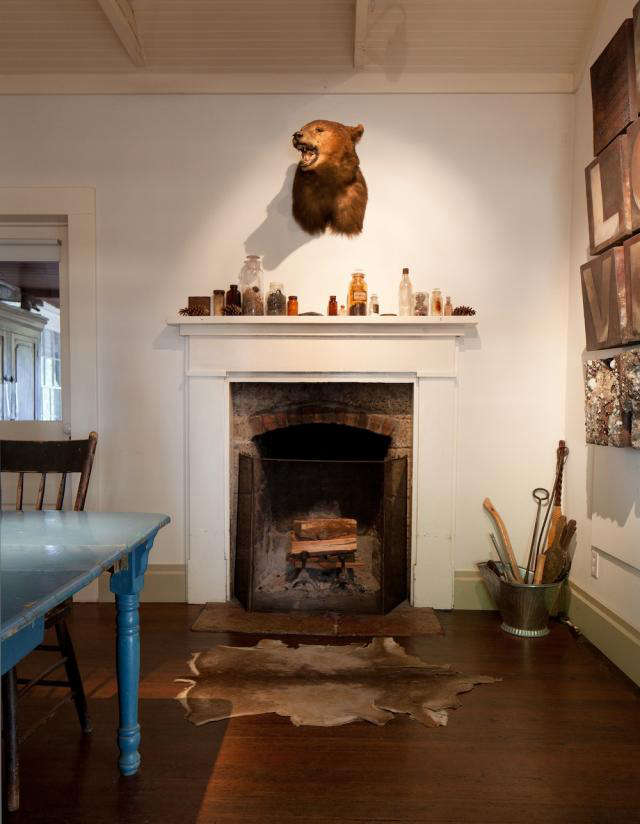 Above: Carter restored the formerly bricked-up fireplace, creating a Rumford-style hearth (it’s taller and shallower than a conventional fireplace and gives off an enormous amount of heat). He added a wooden mantelpiece, which serves as a display shelf for his collection of bottles and jars filled with objects ranging from marbles to arrowheads. The bear head above the mantlepiece is from Steed Fine Hoarding and Tack. 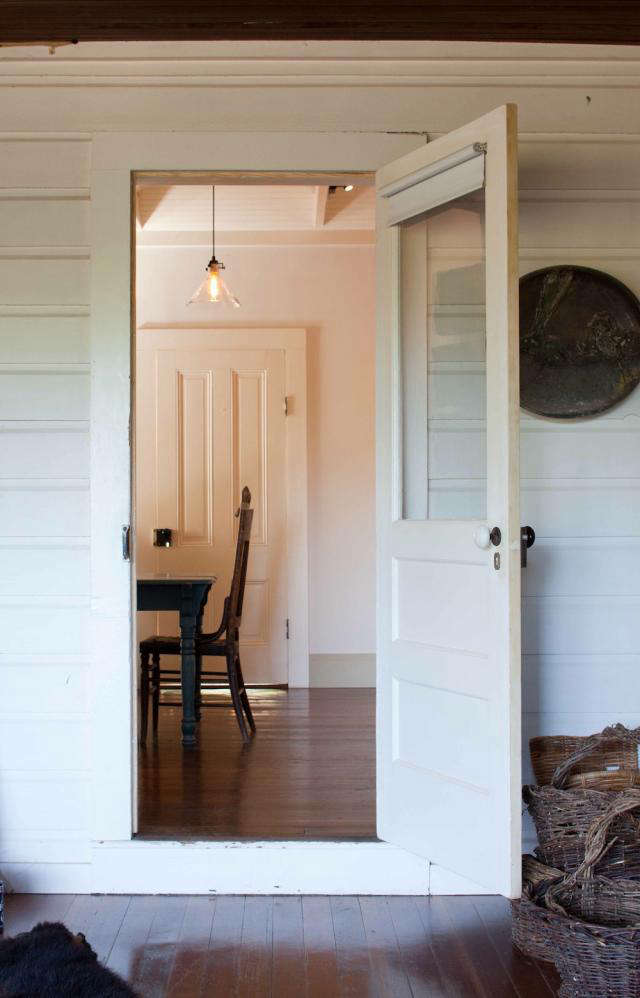 Above: A view from the porch into the dining room. 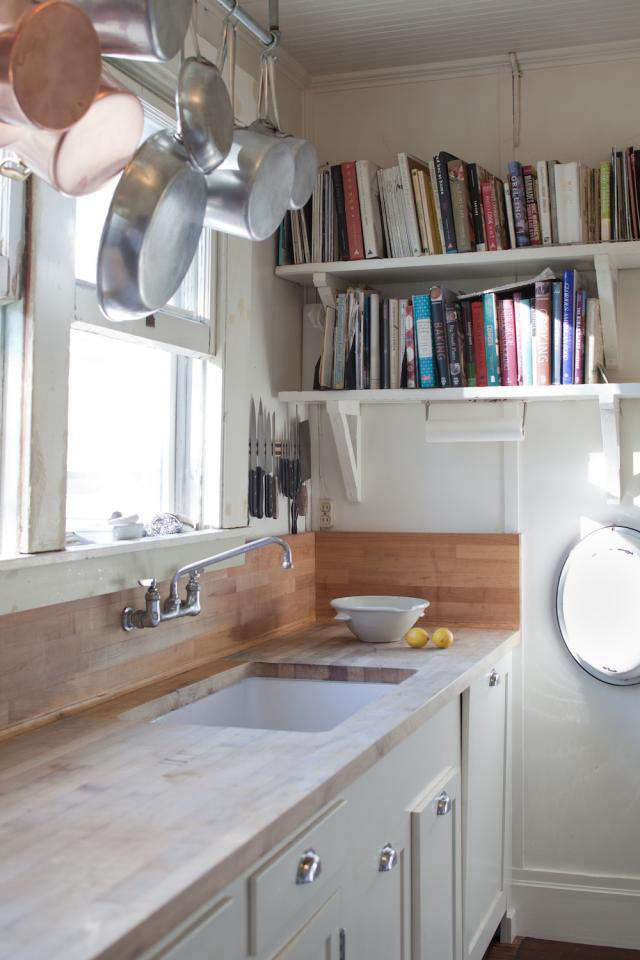 Above; Carter, who spent several years working at the original French Laundry (pre-Keller) is an avid cook and typically prepares meals and dines with his residents daily. 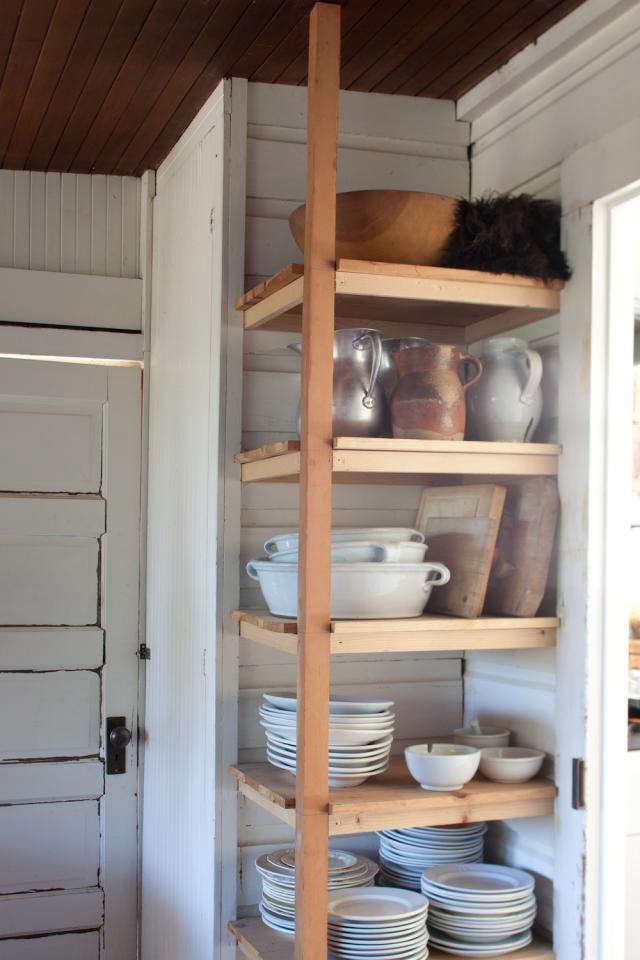 Above: Carter has an extensive collection of tableware including many pieces made by his students-in-residence over the years. 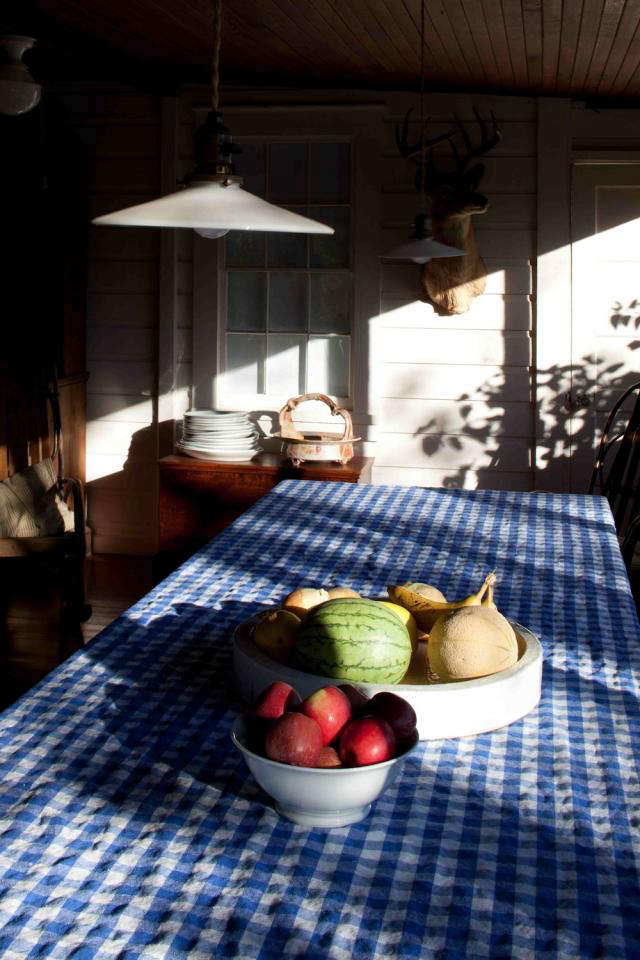 Above: The porch area houses a long dining table with wooden benches that came with the house. The large white shallow bowl on the table is one of Carter’s pieces fired in his kiln (see Tabletop: Holiday Cocktail Party in Pope Valley). Carter collects antique flat milk glass shades, including the one shown here over the table. 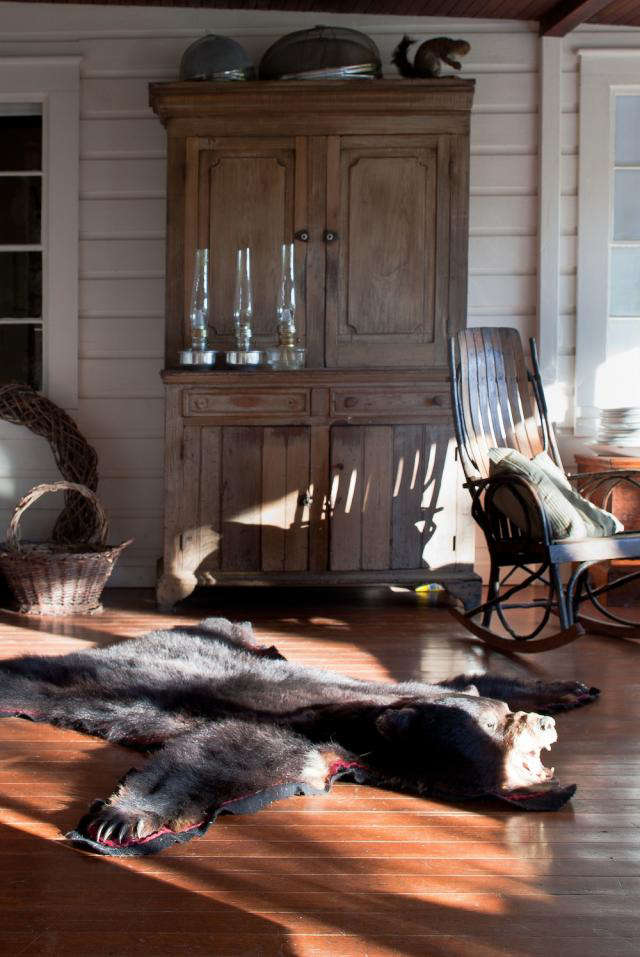 Above: Carter found the dresser on the property and had it stripped and restored. Carter keeps three kerosene lamps, made in the US by Aladdin, on hand–a necessity as the power frequently goes out. The Amish rocker is from Pennsylvania; Carter picked up the Mexican bear rug from the 1920s at an antique store in Petaluma. 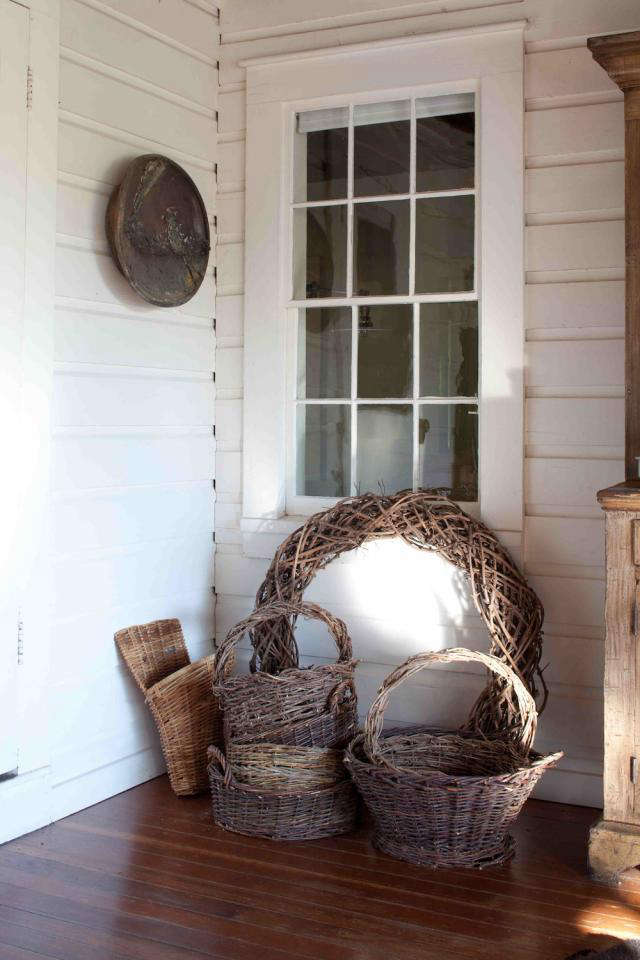 Above: Baskets and a wreath made from Napa Valley grape vines. 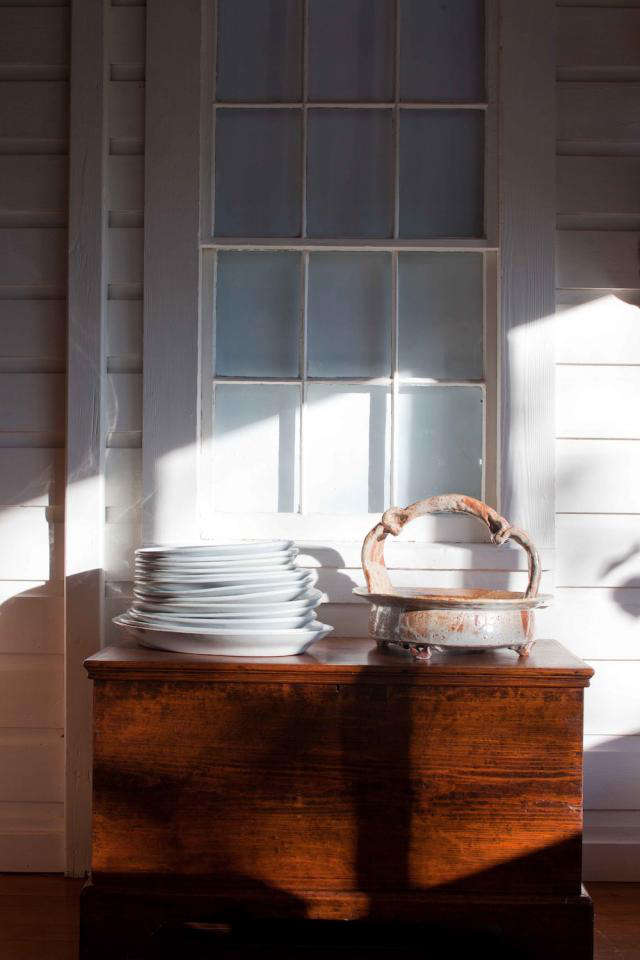 Above: Carter inherited the trunk from his great grandfather; a pile of ironstone plates sits atop, next to a work by Kenneth Ferguson. 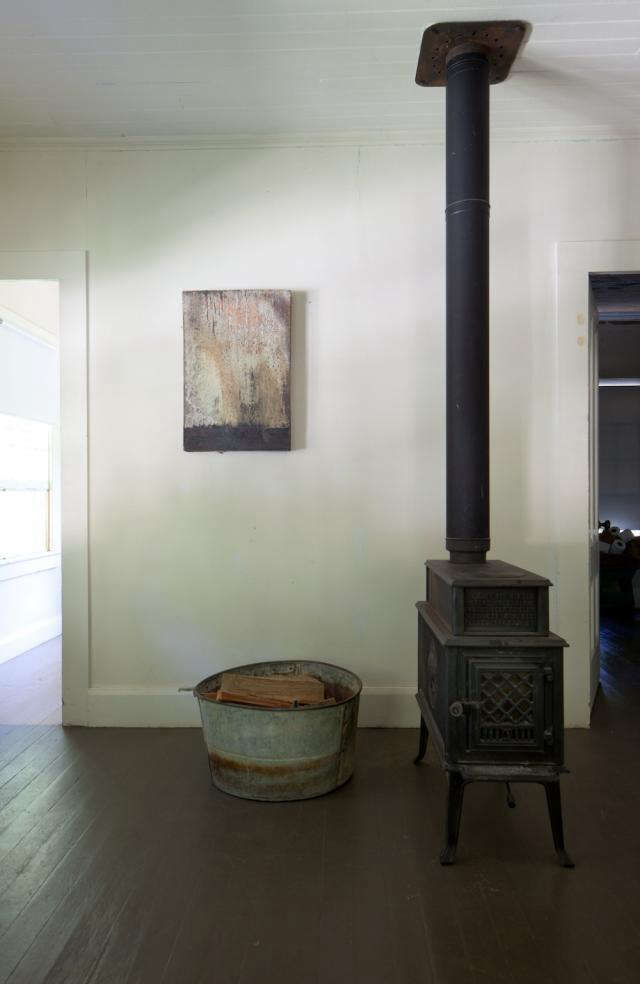 Above: Carter sourced the cast iron hearth from Norwegian company Jí¸tul, which has been making them since 1853. (He also has one in the living room) The clay tile hanging on the wall is by Carter. 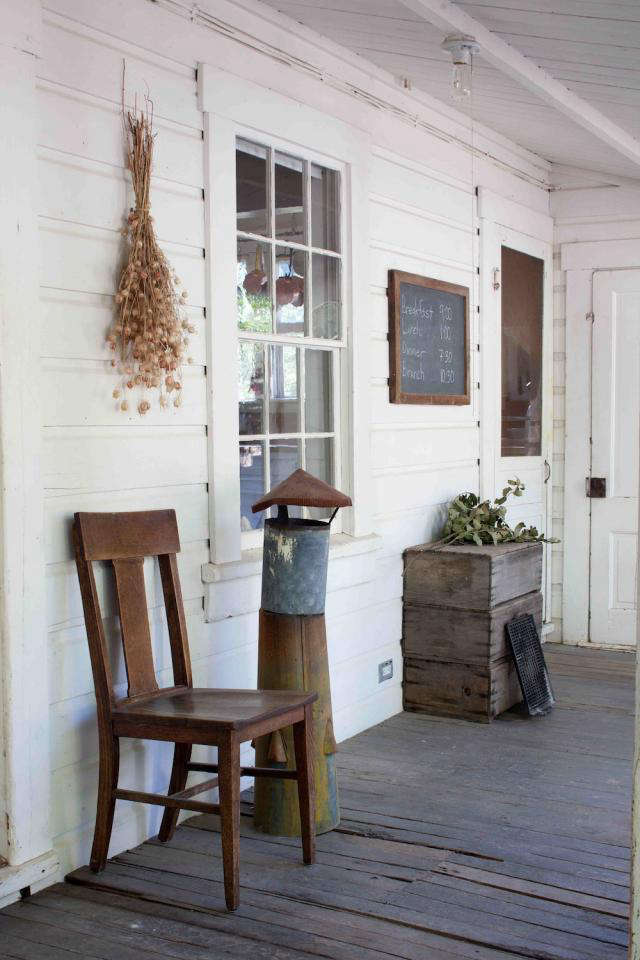 Above: Carter “has a thing for old chimneys,” he salvaged the above chimney when a tree fell on neighbor’s house (he plans to use it on the roof of his own house one of these days). 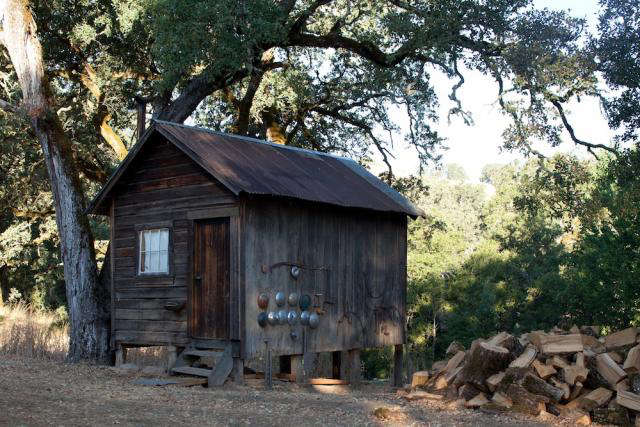 Above: One of the wooden houses for the artists-in-residence features an installation of old metal hub caps on the side, a relic from the former owners. The pile of chopped wood is from fallen trees on the land; wood is a constant necessity, both for heating the entire house and for firing the kilns. 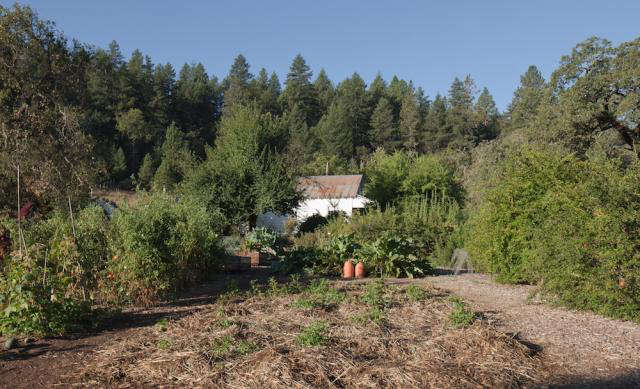 Above: Much of the food eaten is sourced from the gardens above.

A Natural Dye from a Surprising Source