Since 2014, when we first met Gesa Hansen, we’ve been following her around, from her Young Designer in Paris Digs to her High-Style Rustic House for Her Family of Five. Gesa, who is Scandinavian and German and studied in Japan, runs her own interior design firm and furniture line, The Hansen Family, produced by her parents’ wood workshop in Germany. She recently updated us on her latest project: the newly opened Café Compagnon in Paris’s Sentier neighborhood in the 2ème, which she designed for her restaurateur husband, Charles Compagnon.

The morning-to-night cafe-bar-bistro came to be at a fragile time, and Charles’s request was that Gesa create a gathering space with a “light, calm, protective feeling.” She took that directive and ran with it, orchestrating a three-seating-area dining room that is both rigorously planned and filled with personal touches. “The idea was to create an homage to Charle’s late grandfather, sculptor Carlos Ferreira de la Torre,” Gesa tells us. And also to infuse it with a home away from home feeling: “in Paris, the apartments are often so small that your favorite restaurant becomes your living room where you also work, and where you have all your lunches and dinners. That’s why I put sockets everywhere.” Join us for a look at a dozen details worth noting—and borrowing when creating your own place to linger.

2. Animate your rooms with art…

3. …and dynamic furniture, too.

8. Make a statement with stone. 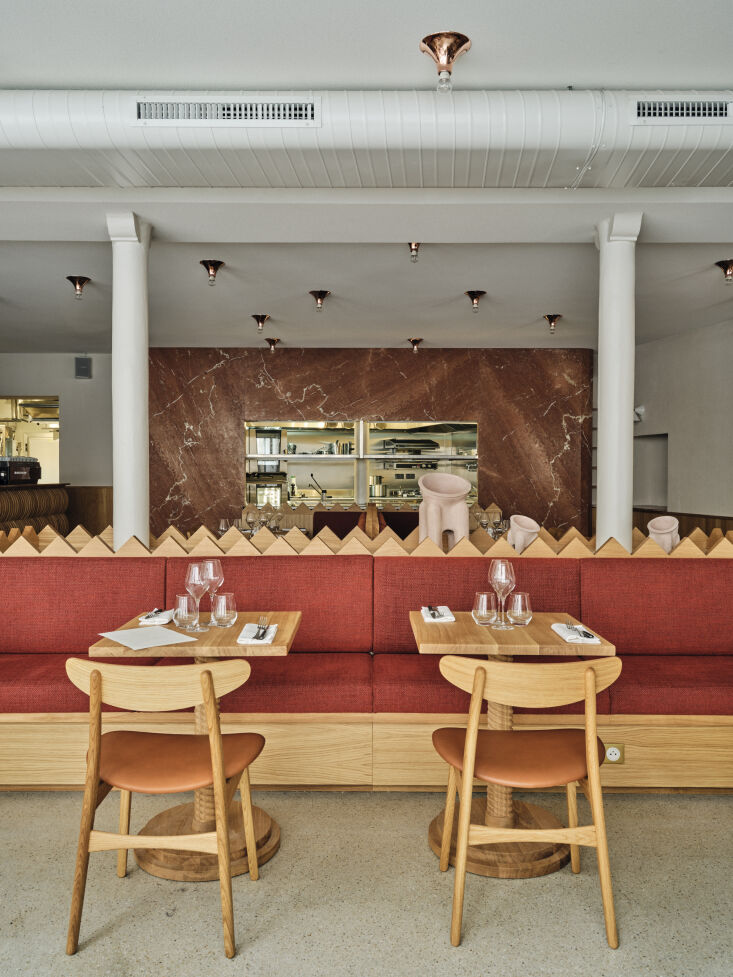 Above: “I prefer to use colored stones as colors instead of painting a wall, says Gesa explaining her choice of Rojo Alicante, “one of the cheaper marbles” on the wall with a view into the kitchen. Set off by white surfaces, the various reds co-exist harmoniously.

Some of the wines on offer are from Charle’s own vineyard in Beaujolais. And to make sure his establishments serve memorably great coffee, Charles spends hours roasting organic beans in a roaster he installed in an old barn at their family home in Courances, south of Paris.

10. The everyday can be eye-opening.

11. Wine works in a small bathroom.

Kitchen of the Week: An Efficient Cook Space in a Quiet Corner of Paris