We like this twist on the family photo. With an aim to beginning another era of their lives, Brooklyn designers Loren Daye and Jesse Rowe wanted to memorialize their apartment before selling it and most of their belongings in it. What did they do? They commissioned their good friend, photographer Brian Ferry (a Remodelista favorite) to take a series of photos that captures where their thoughts have been for the last four years.

Daye and Rowe’s 1250 square foot studio in an old paint factory in the Bedford-Stuyvesant area of Brooklyn is an exercise in filling a home with personality even if your day job as designers is all consuming. Daye who worked at Roman & Williams before moving on to establish her own studio, Love is Enough, has recently rejoined friends at Atelier Ace as Head of Interiors while Rowe, a clothing designer, worked most recently as a menswear designer at Steven Alan. “Our space is a random, circumstantial and accumulative amalgam and collection of personal history and travel,” Daye says. “So much love and attention goes into my work that home becomes a leftover respite, very rarely a design exercise in its unplanned melange.” 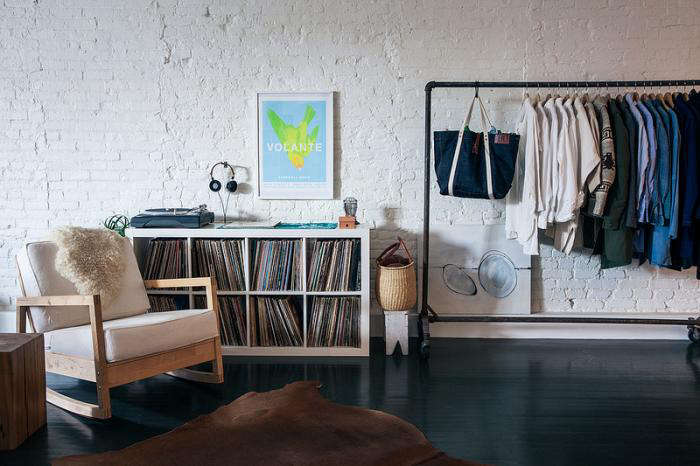 Above: A listening nook for enjoying the couple’s vinyl collection is anchored by a limited edition, rocking chair from the Ikea PS collection. The double wide proportions make for comfortable listening. 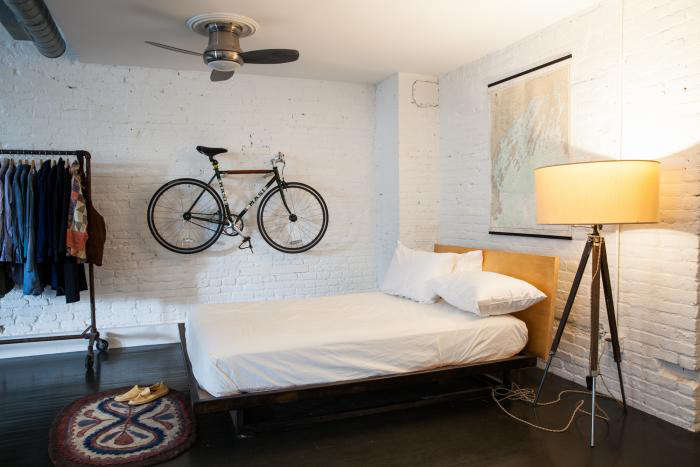 Above: The bed is made of blackened steel with a Baltic birch plywood headboard and was built by good friend and architect Matt Hutchinson who built the bed from a toothpick model that Rowe made. Rowe’s mode of transportation around the city hangs on the wall. In 10 Favorites: Indoor Bicycle Storage, we explore other for parking your bike indoors. 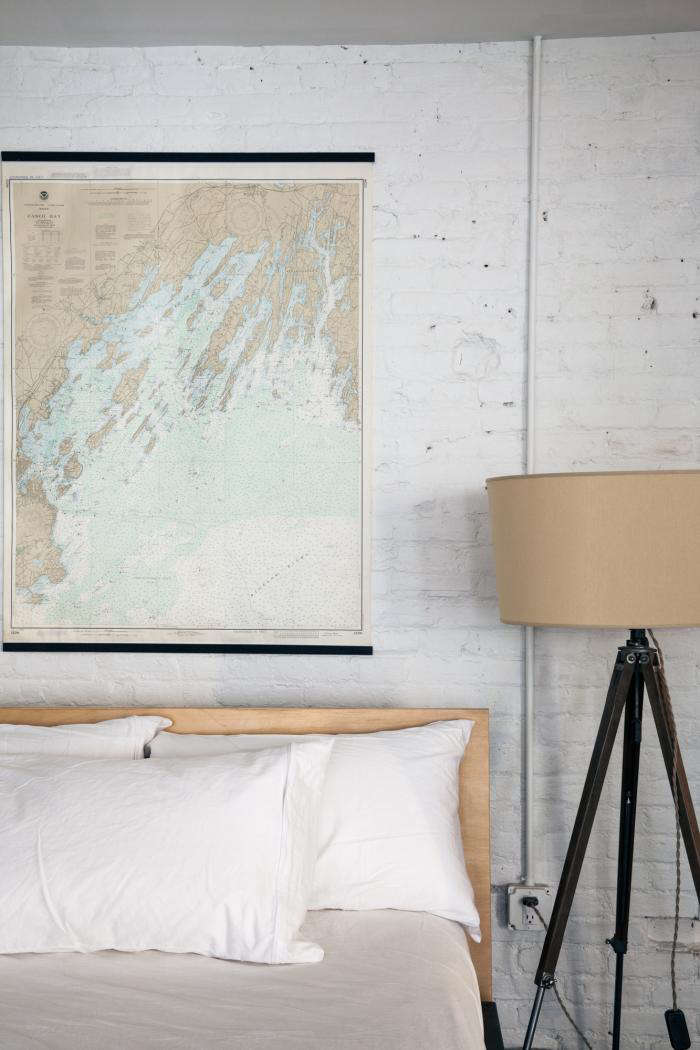 Above: A map of coastal Maine from Daye’s mother hangs in a Re-Frame poster hanger designed friends Paul Galli and Todd Seidman of 54Dean. “Jesse built the lamp for me from a old tripod when we were first dating,” Daye says. “He bought the lampshade from Just Shades on Spring St. and vintage cloth covered wire from Sundial Wire and cobbled the whole thing together.”

“It’s a little janky and tilts to one side, but I love it,” Rowe says. 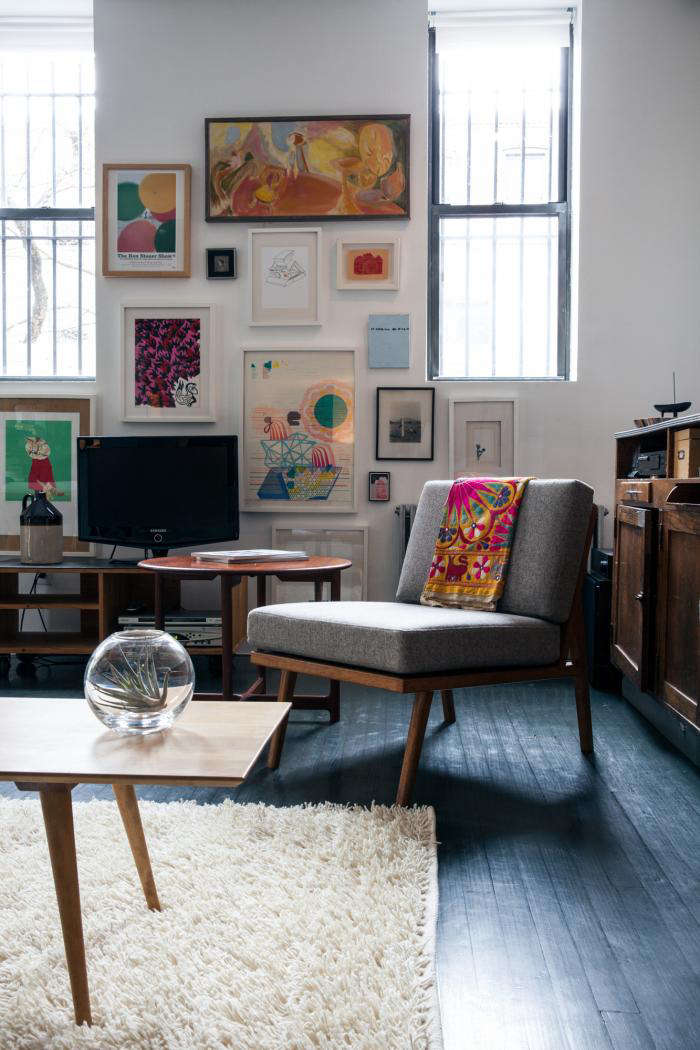 Above: The artwork on the walls is a combination of the couples’ own, that of friends and artists – a place where the couple feel they can visually catalog their experiences for a sense of time, place and connectedness. “I have an obsession with affordable art so I have always got an eye out for new stuff when I’m out and about,” Rowe says. “It could be a random flyer, a gig poster on a phone pole, a page from a found book, a screen print by a local artist. The one on top is actually a painting by my uncle Tim from when he was in art school in the 60s.” 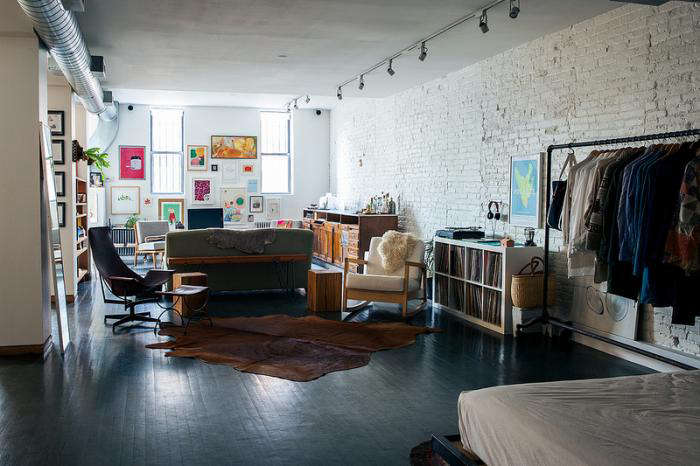 Above: The floors are finished with three-parts basic ebony stain mixed with one-part Ronan Japan colors pigment in white. “The floors were kind of an experiment to approximate the look of a concrete factory floor”, Rowe says. “Instead of wiping the stain back after application, we let it sit and soak in; applying 2 coats. The resulting finish has a paint-like opacity but it is actually soaked into the wood, showing its character more than paint.” 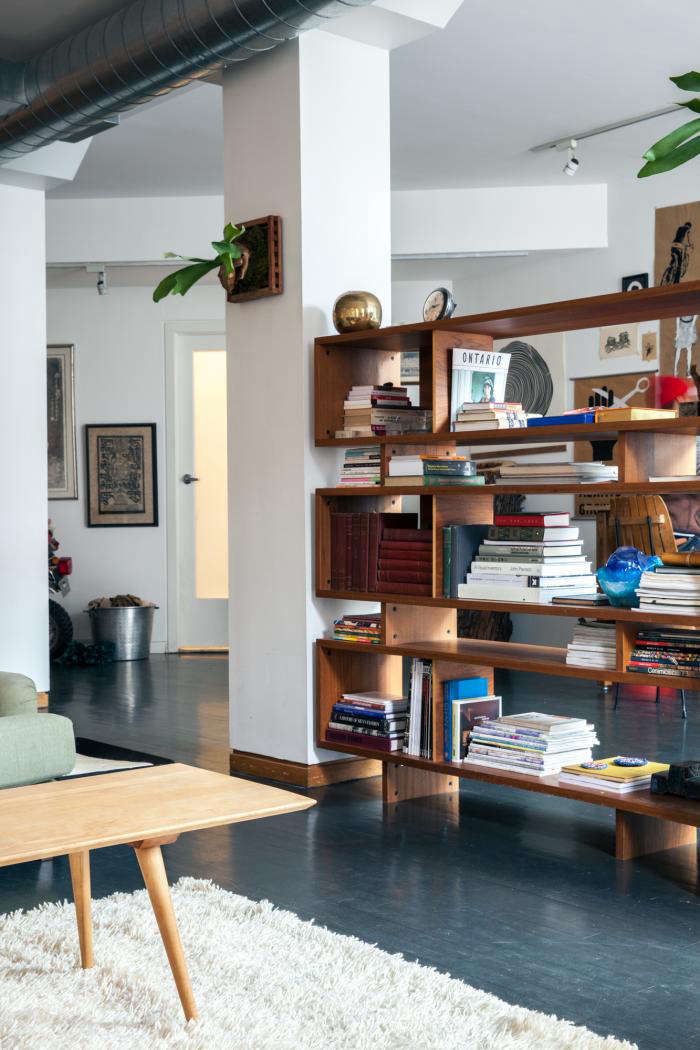 Above: The bookshelf which the couple use as an ad hoc room divider is made from walnut and bent plywood and made by a local Brooklyn furniture designer. 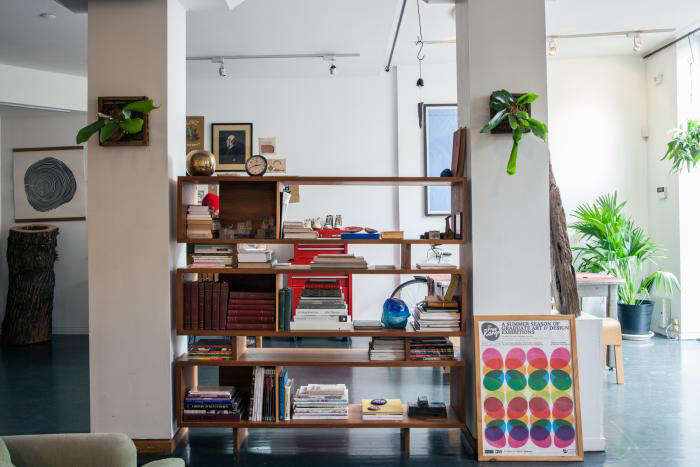 Above: ” I actually bought the bookshelf when we were living to together in a different space, but in a weird act of kismet we discovered it fit perfectly between the columns of our current space and helped divide the home office and living areas really nicely,” Rowe says. “One of those happy accidents.” 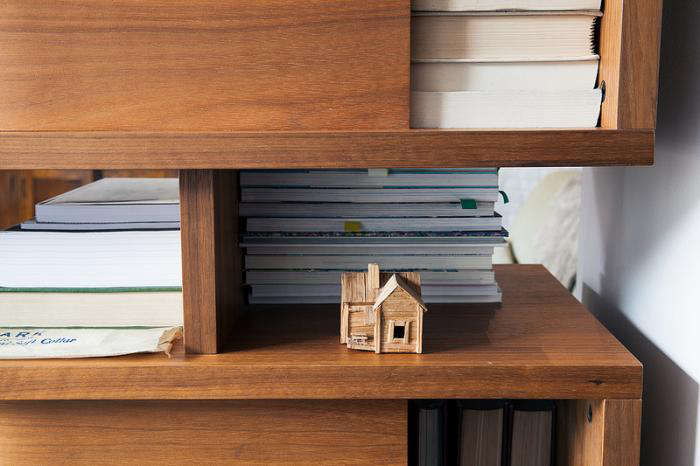 Above: “I’ve always loved models and miniature things,” Daye says. “I bought this model of a house in the desert at an antiques shop while sourcing for Ace Palm Springs.” 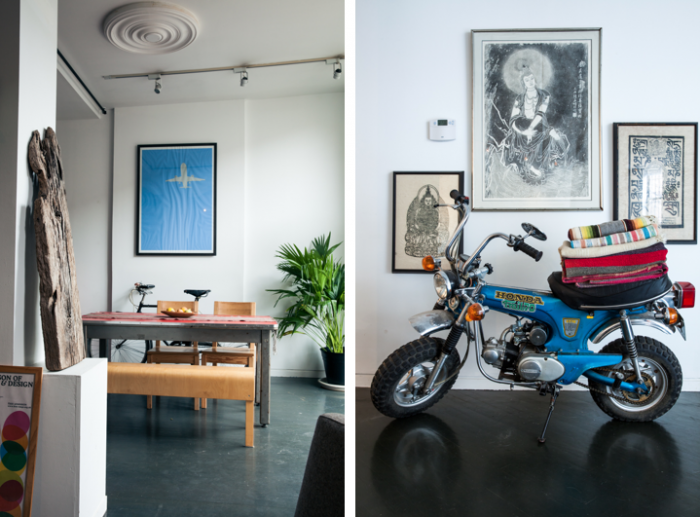 Above: (L) “On my 16th birthday, I dragged this piece of driftwood back from Assateague Island as a gift to my father,” Daye says. (R) Rowe bought the motorcycle from eBay on a lark to celebrate his birthday. “I always wanted a vintage motorcycle and was trolling around eBay for bikes that were built the same year I was born,” he says. “This one popped up and I bought it immediately. In my excitement, I failed to realize that it was located in Vancouver, BC and it cost more to have the thing shipped across the country than what I paid for it. We call him Elmo.” 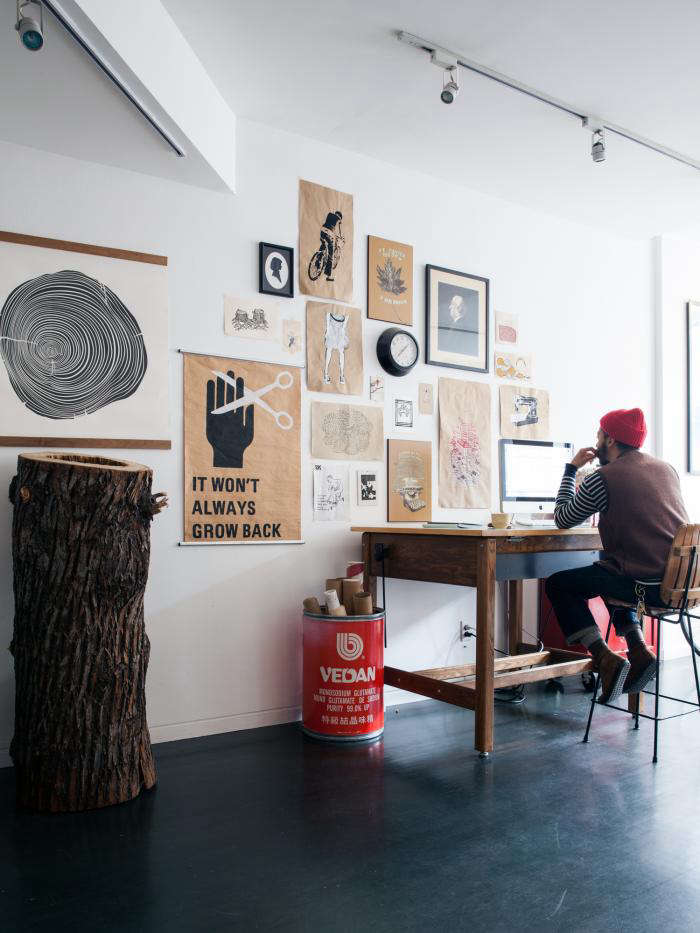 Above: The couple are selling their old oak drafting table (contact them through comments below if you are interested). “It actually has a light box built into it, which is pretty amazing,” Rowe says. “I found it on a trip to Seattle and (like the bike) had it shipped cross country – don’t know what it is about me and the transcontinental purchases?” 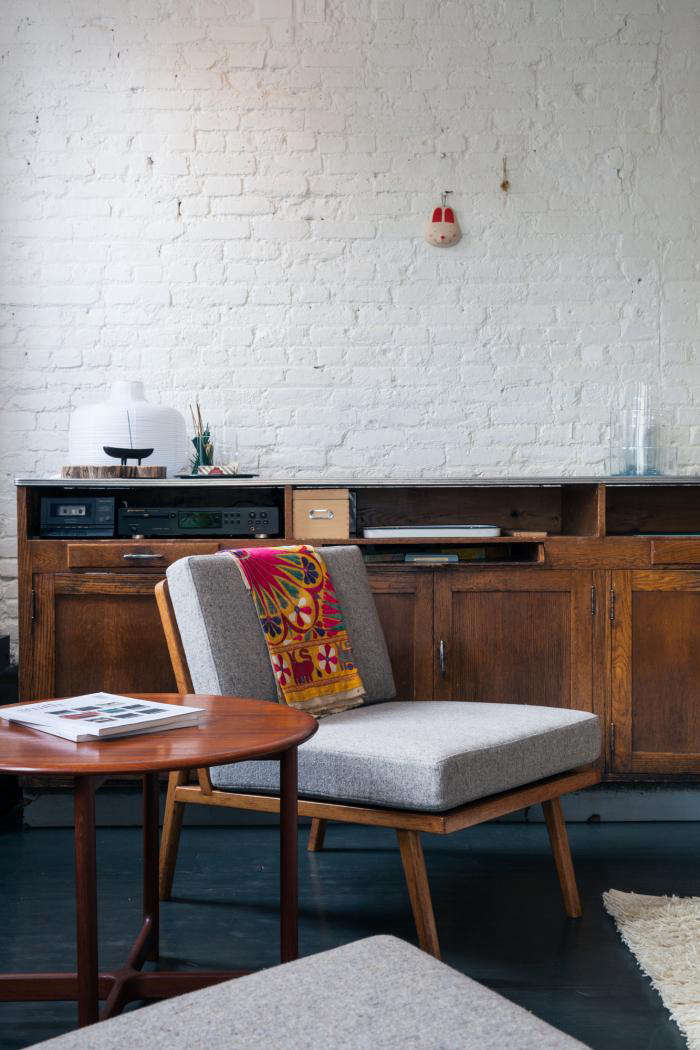 Above: The credenza is a remnant of Daye’s renovation of Steven Alan’s original flagship store in Tribeca and used to be the back bar to the cash register. “I didn’t want to see it thrown away, so we took it home,” Daye says. ” It’s so big we had to hire someone to cut it in half to get it through the door.” 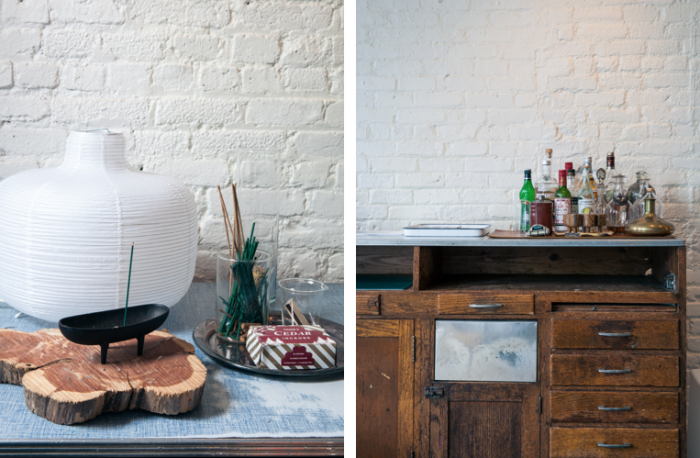 Above: “The formica on the credenza is a marvelous shade of light blue and has really interesting patterns of wear and texture on the surface from its different lives so far,” Rowe says. ” It’s like chambray.” 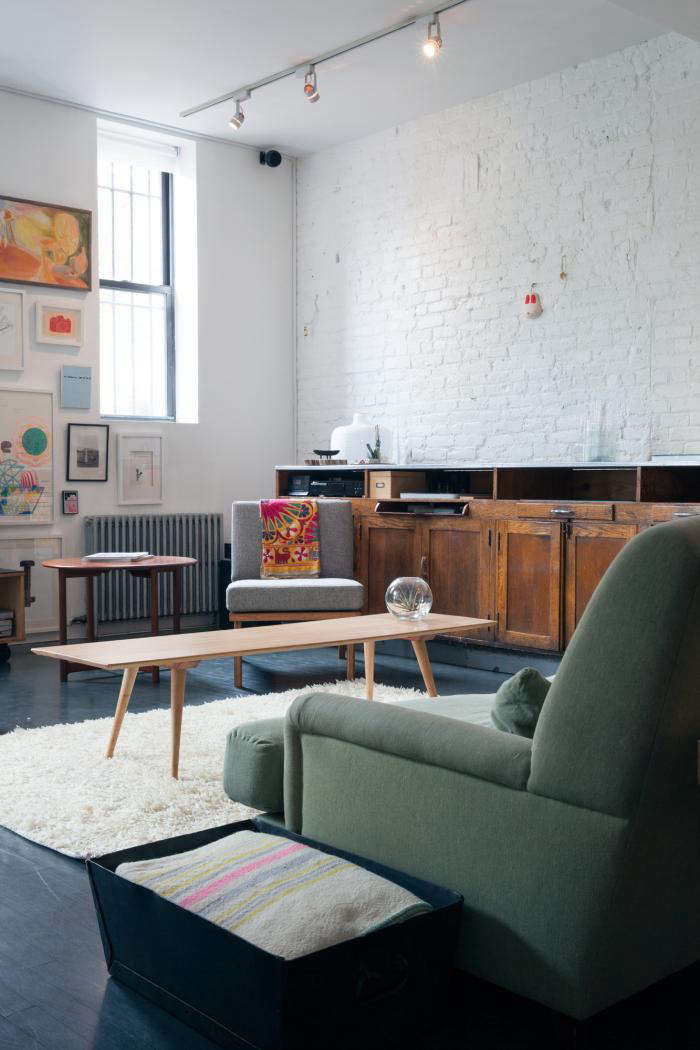 Above: The couple have a rotating furniture exchange with friends from down the street to keep their respective spaces feeling fresh. 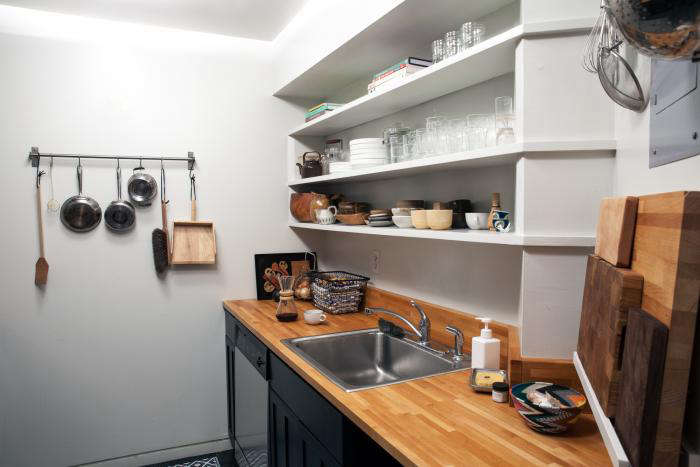 Above: The couple’s small kitchen was inspired by “tiny but well equipped Japanese kitchens”. 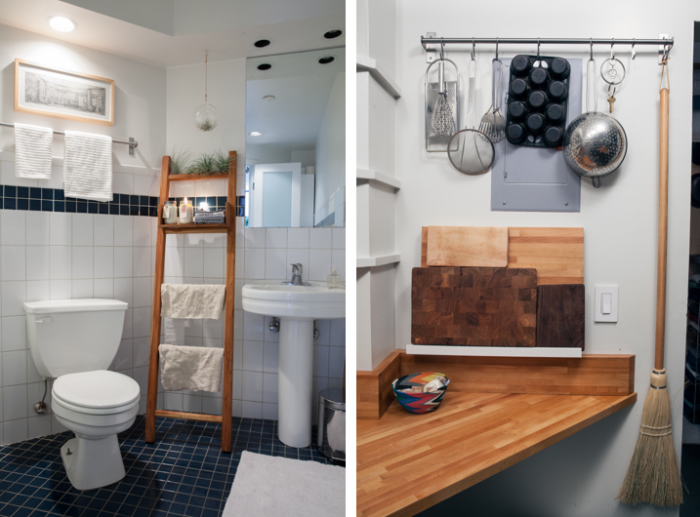 Above: (L) A wooden ladder is propped up against the bathroom wall and used as a towel rail. (R) Every inch of available space is used for storage in the kitchen. 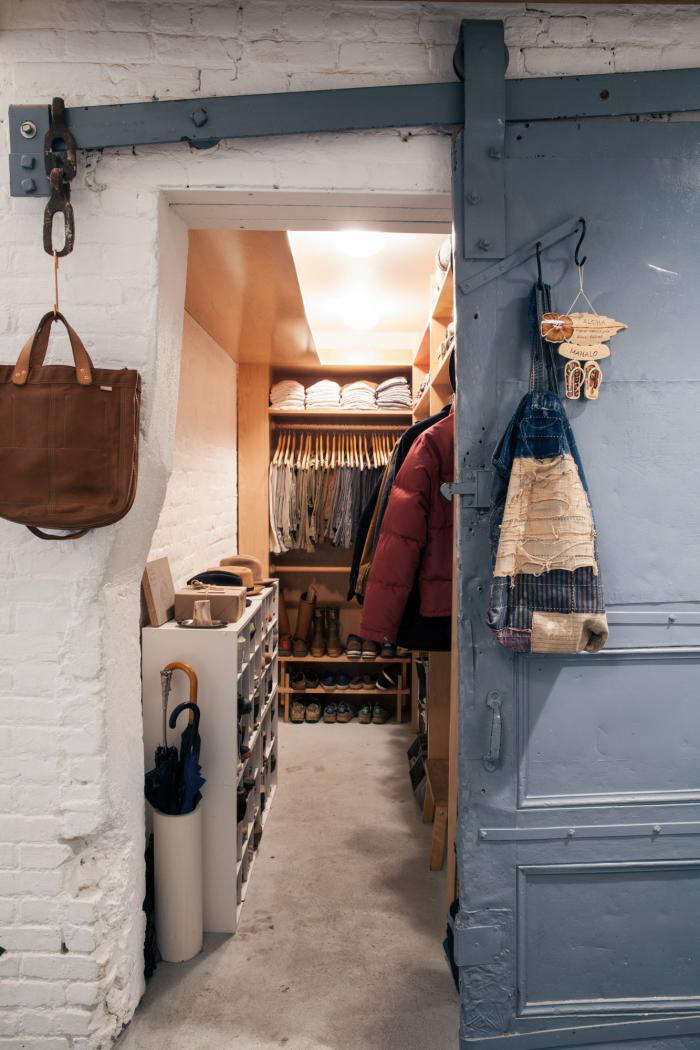 Above: A wooden walk-in closet has been installed against the building’s original brick walls, which the couple painted white. 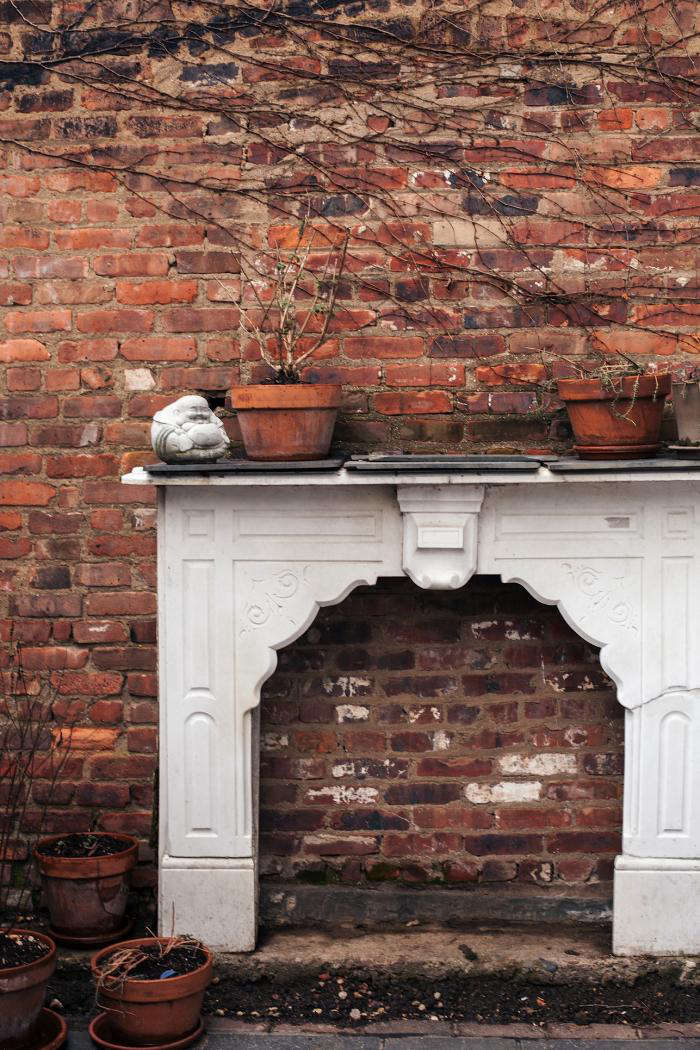 Above: A fireplace mantle becomes a garden feature when place outside.

If you liked the bookshelf that Daye and Rowe made into a room divider, see 5 Favorites: Clever Room Dividers for more. In 5 Favorites: Bricks Made Modern,  we show you bricks used in unexpected ways. And on Gardenista, A Showstopper Backyard in Brooklyn is urban outdoor living at its best.

Reader Roundtable: Would You Hire a Friend (or Work for One)?