Faye McAuliffe, LA interior designer, blogger, and co-owner with her sister of Bread & Water Catering, planned her Inverness, California, wedding the way she approaches interiors projects: “I went on Pinterest and got super addicted. Then I created mood boards of looks that I liked.” Those pins paid off.

She married cinematographer Justin Kane and their wedding took place in the Northern California hamlet of Inverness on Tomales Bay, about 40 miles north of SF, where Faye and Justin were able to have both the misty woodland ceremony and waterside celebration they envisioned. And also the crowd: Both of their families live in California and Faye’s have a tradition of gathering at her aunt and uncle’s in Inverness, “so it made sense to convene in one of the most pristinely beautiful places in the world.” In lieu of a team of wedding planners and hired help, the couple and friends and relatives did most of the work themselves, wedding cake included. Faye was happy to relive the day with us. 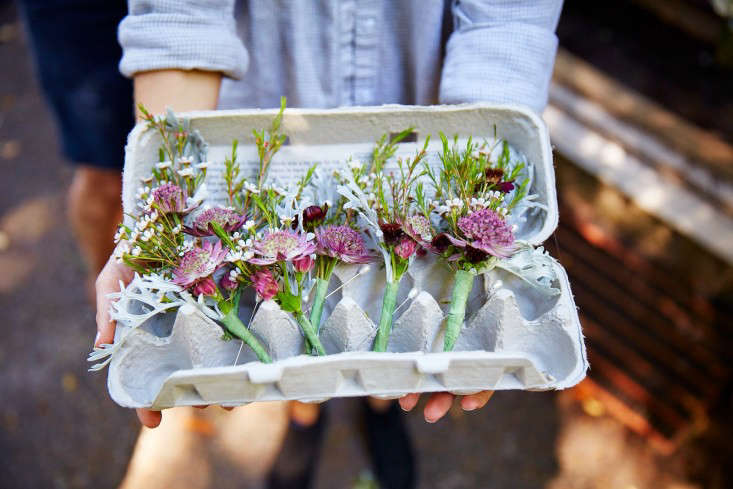 Above: “I wanted our wedding to be low key and to have a magical, woodsy vibe: sophisticated but comfortable and intimate,” says Faye, who recruited her aunts and mother for help with the flowers. Shown here, the perfect way to transport just-made boutonnieres. 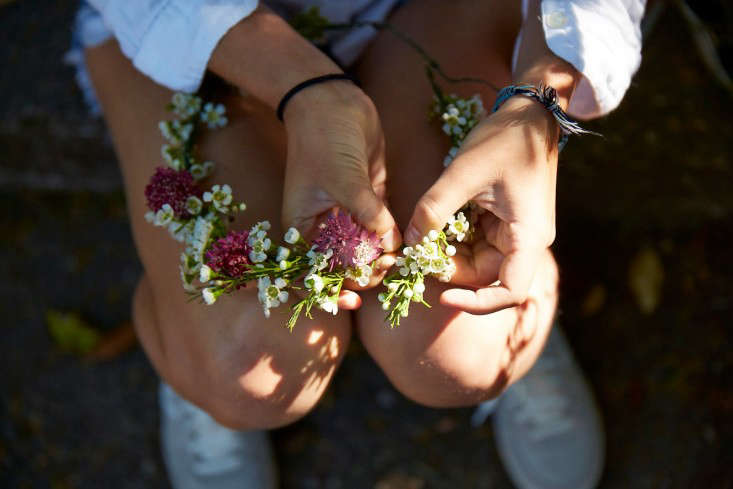 Above: “The flowers were chocolate coreopsis, spray roses, olive branches, white lisianthus, veronica (white with dark tips), dahlias, scabious, heather, wax flowers, sea holly, aster, purple center white anemones, eucalyptus, and several more I don’t remember the names of.  My bridesmaids all got to pick their own flowers for their crowns so each one was quite different.  We took all the petals from the broken and damaged flowers along with dried lavender and put them in brown parchment paper cones for guests to throw when we walked down the aisle after the ceremony.” 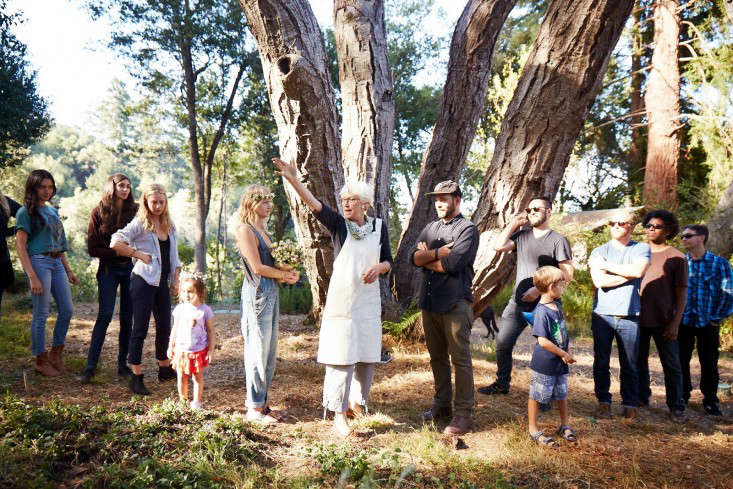 Above: McAuliffe’s aunt directs the rehearsal.

“Justin popped the question after he graduated with his masters from AFI. We were on a hike in Elysian Park, and he stopped and bent over saying he got a rock stuck in his shoe; when he looked up, he had a ring in his hand and asked if I would marry him. It was so surreal that I kept asking him if he was sure between sobs. Finally I snapped out of it and said yes!” 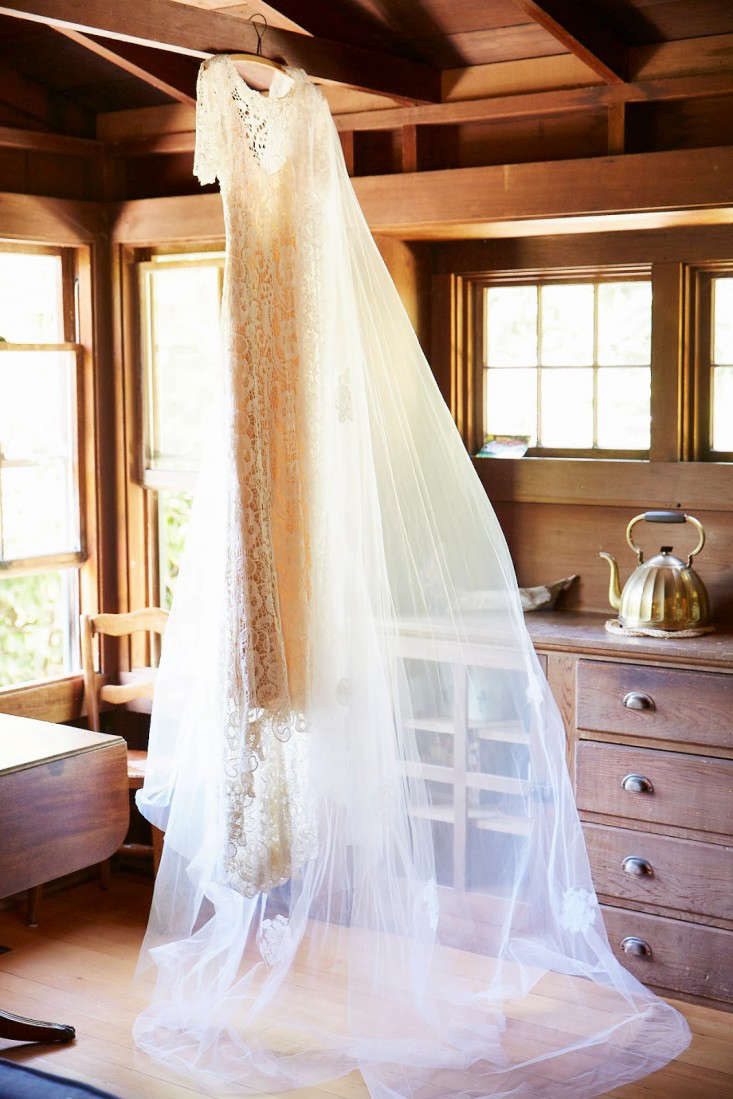 Above: Faye and her bridesmaids got ready at the Wee Housie, a 1917 redwood cabin rented via VRBO “as a place to get away from the chaos of the wedding.” Guests lodged in area hotels, including Manka’s Inverness Lodge. (Planning a trip to the area? See our San Francisco Bay Area Guide for our recommendations.) 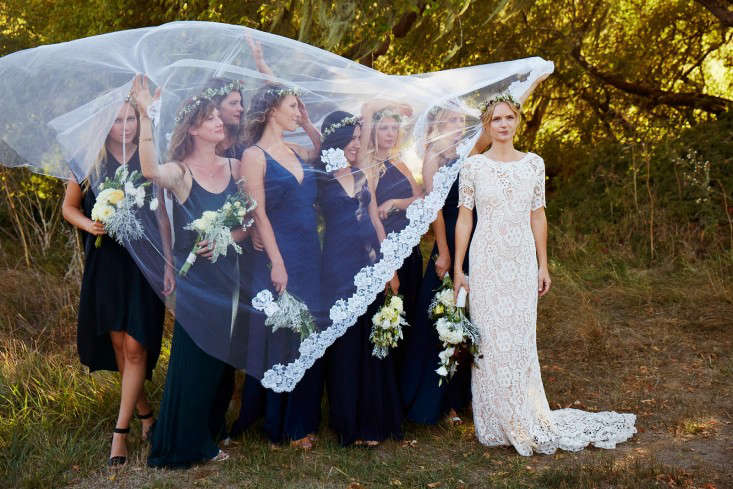 Above: Moments before the big moment. The wedding dress is an Ivy & Aster design and the veil was Justin’s mother’s. 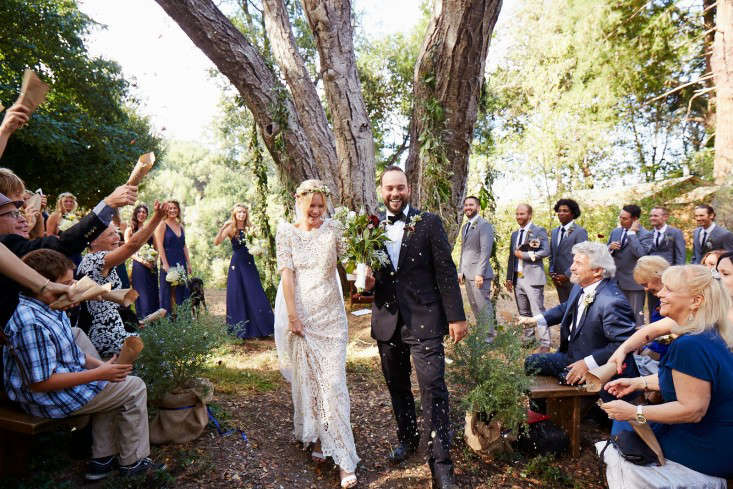 Above: “The ceremony took place in the meadow beside my aunt’s house which overlooks the bay. I ordered simple wood benches to tie in with the meadow, and my aunt made flower garlands that hung from the oak tree which served as the alter of sorts.” 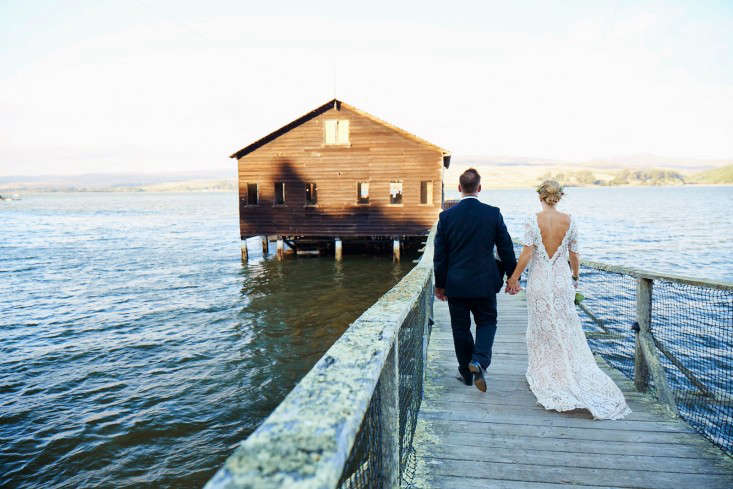 Above: Arriving at the Launch for Hire, which dates to 1914. Faye and Justin chartered a school bus to deliver the wedding party to the boathouse for the celebration.

“Booking the Launch for Hire was extremely difficult. Fortunately my aunt and uncle are part of the Inverness community and were able to track down the owners, but it still took months of emails and calls to get a response. That being said, the persistence paid off because it was such an amazing space.” 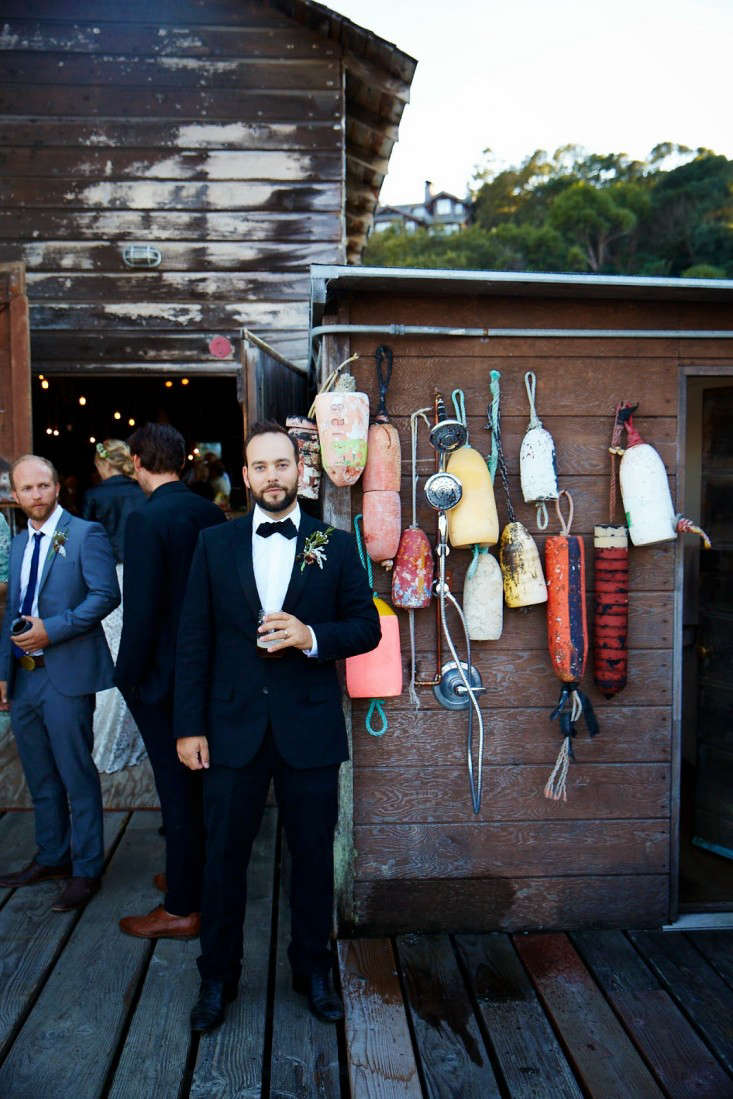 Above: The place came well accessorized. 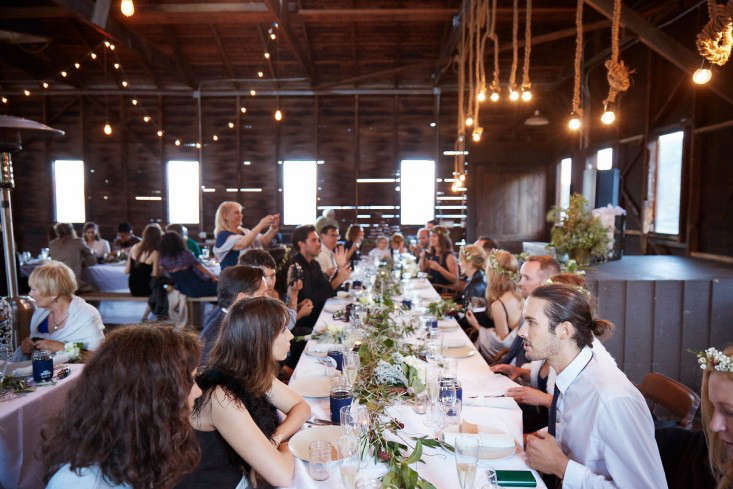 Above: “I envisioned long communal tables with rustic garlands running down the middle and bench seating,” McAuliffe told us. “The tables were arranged in a U formation so that the guests could look out at the breathtaking view of the bay as the sun set.” 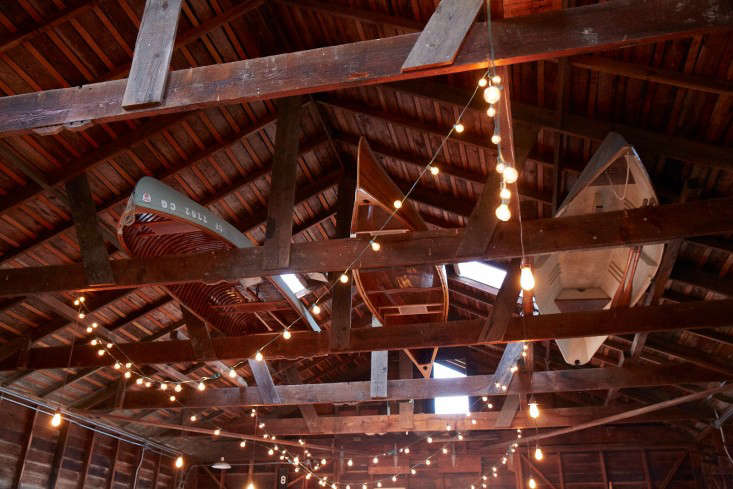 Above: The couple and friends rigged a 20-foot-long nautical rope chandelier to hang over the head table at varying heights. “The rope referenced the beautiful wood boats that were displayed up in the rafters, and the wall of buoys outside.” 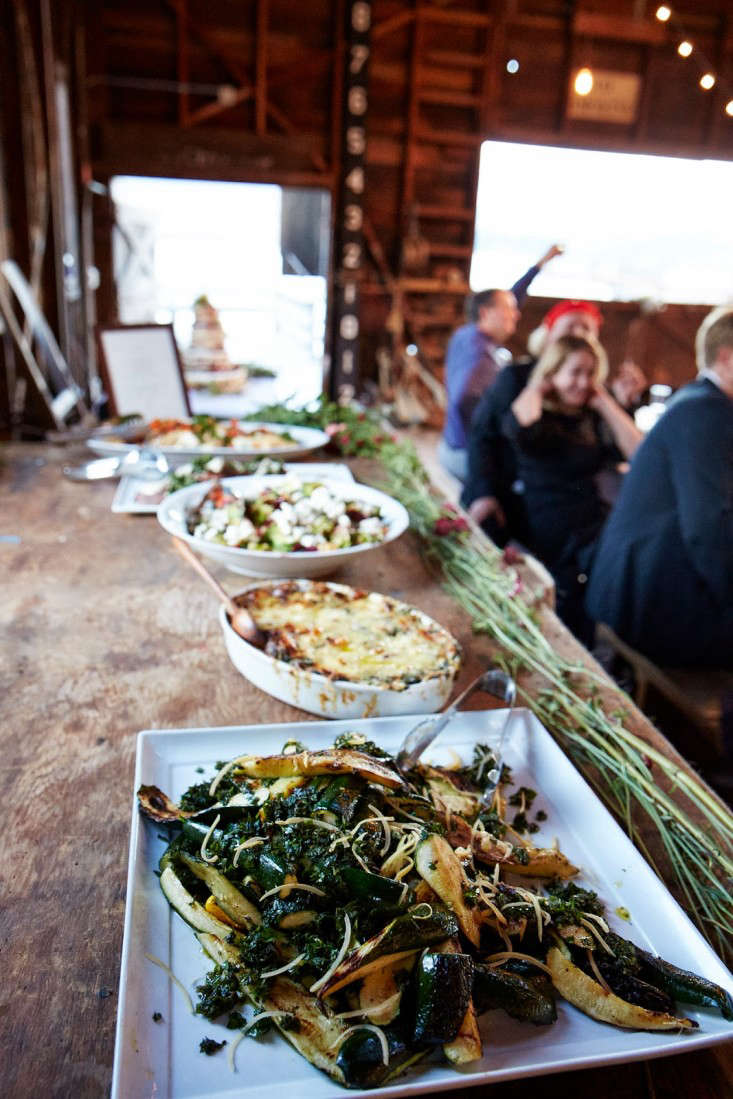 Above: Faye created the menu making the most of the area’s bounty: halibut caught the day before, grass-fed local steak, and vegetables and cheeses from the San Rafael farmers’ market. The cooking was done by her friend David Wilcox–like Faye’s sister, Maeve, Wilcox is an alum of Remodelista favorite Gjelina in LA. 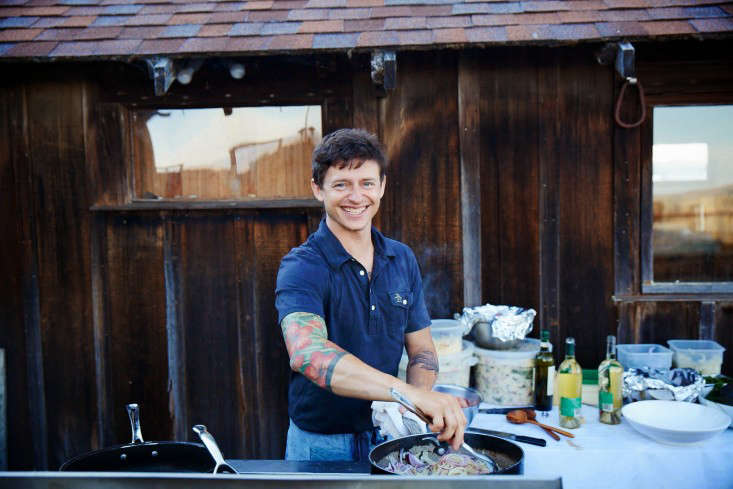 Above: Chef David Wilcox in action in the open kitchen on the back deck. The outdoor setup included oysters “served straight from Tomales Bay with homemade cocktail sauce that guests received as parting gifts. I had to throw in a little kitsch and sent them home with custom beer koozies too.” 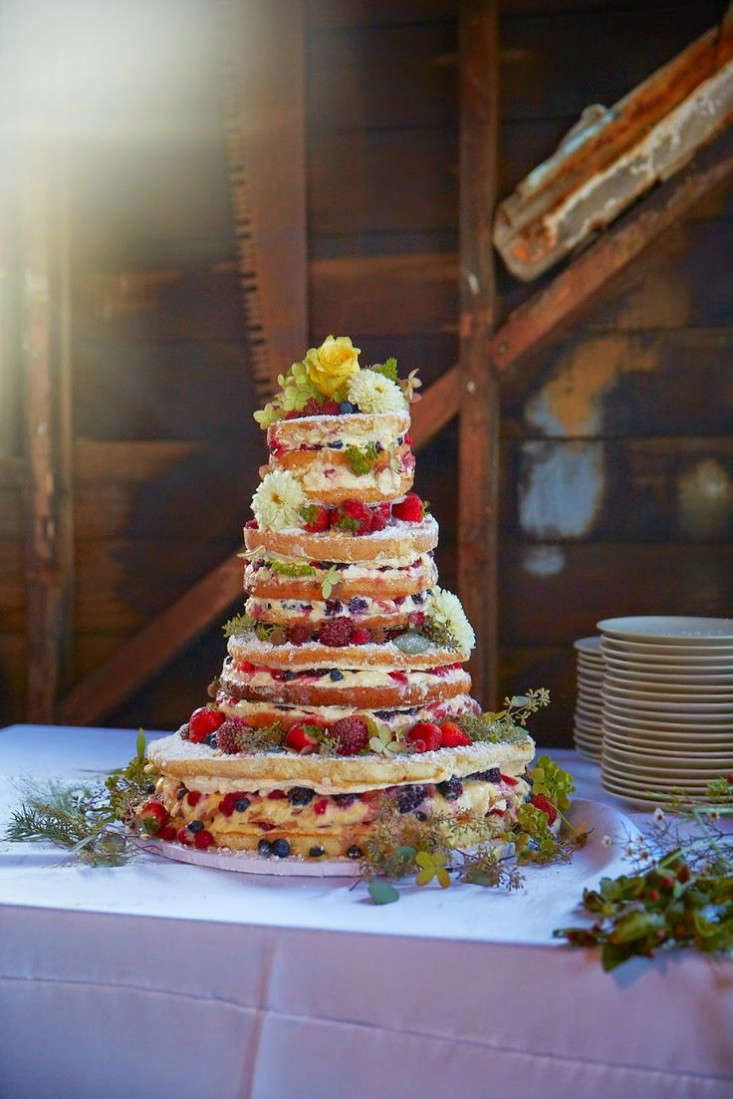 Above: McAuliffe’s mother, a baker and French bakery owner, created the final course: a French genoise cake with vanilla pastry cream, French butter cream, lemon curd, and fruit and berries from the farmers’ market. “It was decorated with flowers referencing the garlands on the tables.” 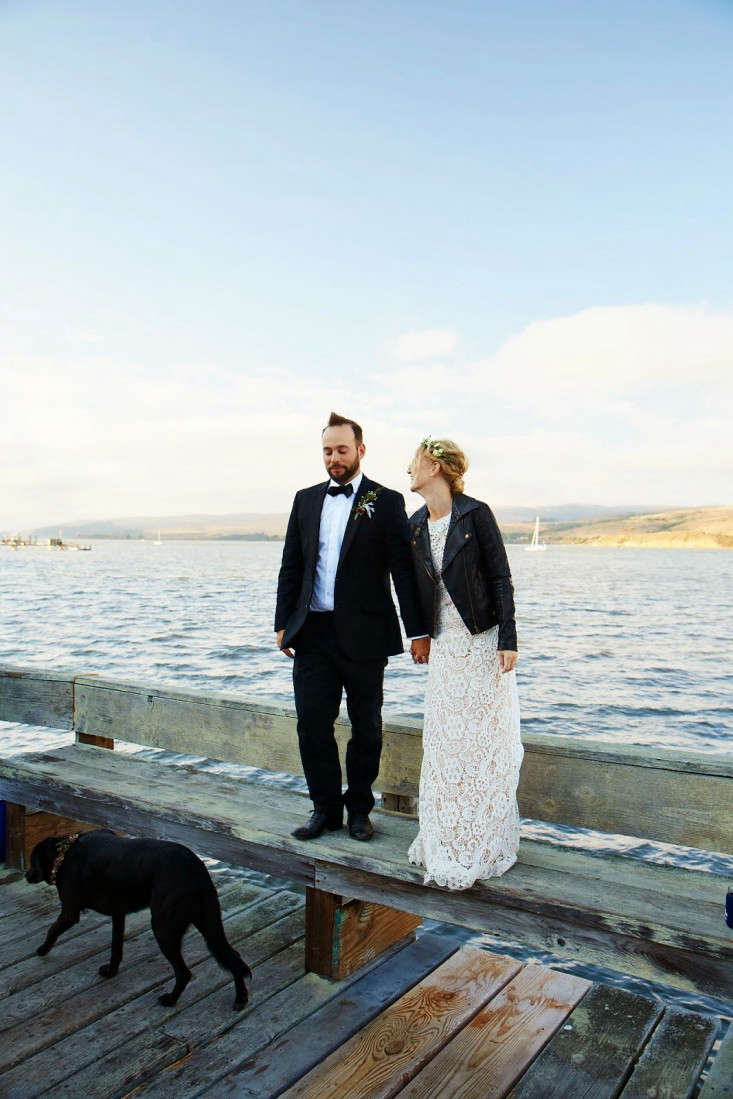 Above: Take a look at Faye’s Wedding board on Pinterest to see how so many of the wedding elements and the overall vibe grew out of a collection of images. And see more wedding pictures here and here on Faye’s blog, You Are the River. Have a look at Faye’s interior design work in our Designer Visit post.

The World Is His Oyster: Saltwater in Inverness, CA

A Better Registry: 9 Places to Shop for the Modern Couple