London designer Charles Mellersh is obsessed with the way good design can improve the quality of life. This weekend he talks about his design decisions in a renovation of a late Victorian terraced house in Notting Hill, London.  He is available for the next 48 hours to answer your questions, so ask away!

In his former life as interiors editor at Wallpaper, Charles Mellersh, a member of the Remodelista Architect and Designer Directory, liked to tell stories while creating atmospheres to provoke emotional responses. His work as an interior designer is no different–but now his stories are tactile and three-dimensional.

With this 3,000-square-foot late Victorian terraced house, the designer was interested in creating a home that told the stories of the lives of the people who lived there. “My client was working in London’s financial markets at a time of great economic turbulence, and it felt more important that the interior be designed to stand the test of time, rather than a superficial showcase for a collection of statement pieces,” Mellersh says. “The client’s previous home was a dark and moody bachelor pad for one; now he was newly married, and we wanted this project to reflect that optimism.” 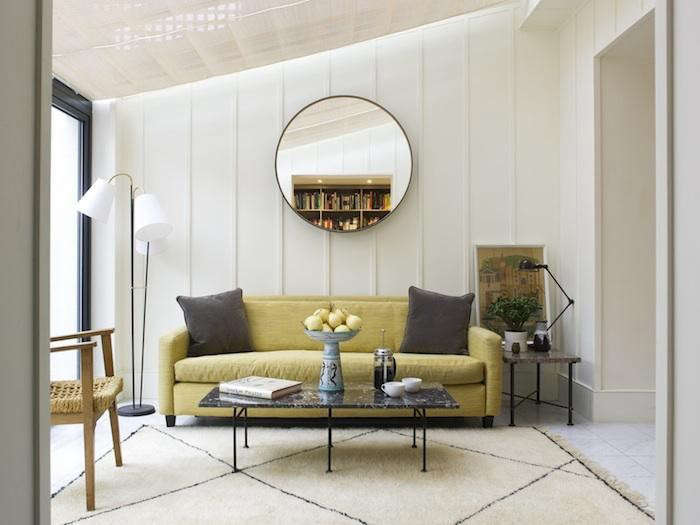 Above: In the sitting room, the textured Moroccan carpet anchors the seating plan and adds warmth to the marble floor. The designer uses a blind made out Penoleum to diffuse the light from above without blocking it completely. The blind is painted with a reflective material which keeps the room cool on sunny days and is operated on a wire track system. A custom-sized Leather Round Mirror from BDDW in New York hangs above a Habitat Sofa by Matthew Hilton. 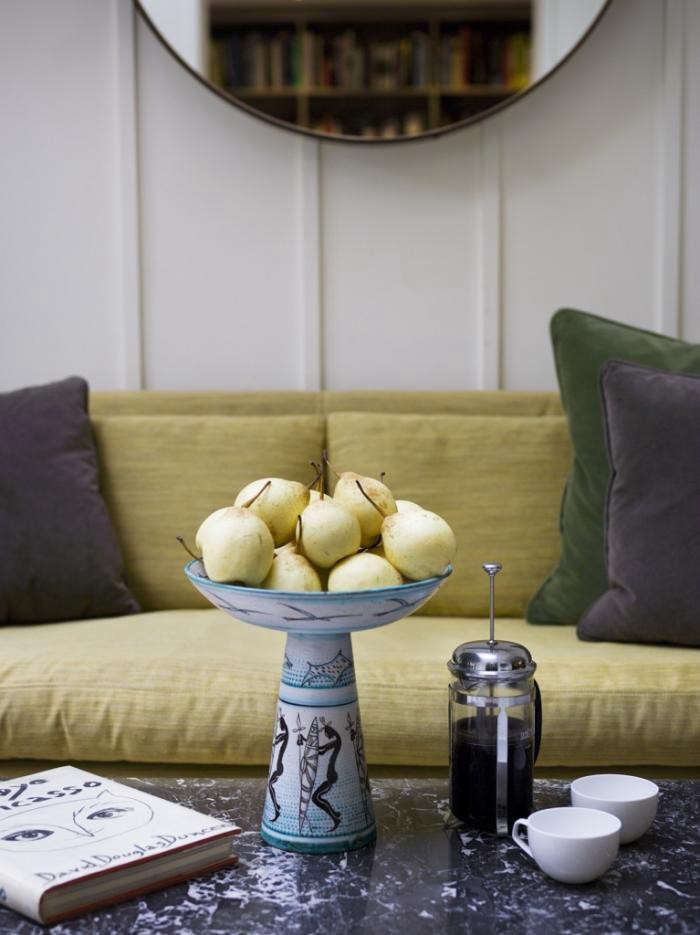 Above: The designer used six white hues throughout the project. To offset this, he deliberately looked for rich textures throughout the material palette, including the gold melange weave fabric on the couch and the tactile charcoal and green velvet for the cushions sourced from Emery et Cie in Brussels. “The brief from the outset was for a clean yet warm aesthetic, but the danger is that in gutting the building you can also throw out the character and personality, so I was mindful that strong and robust textures were needed to evoke a feeling of depth and warmth,” Mellersh says. 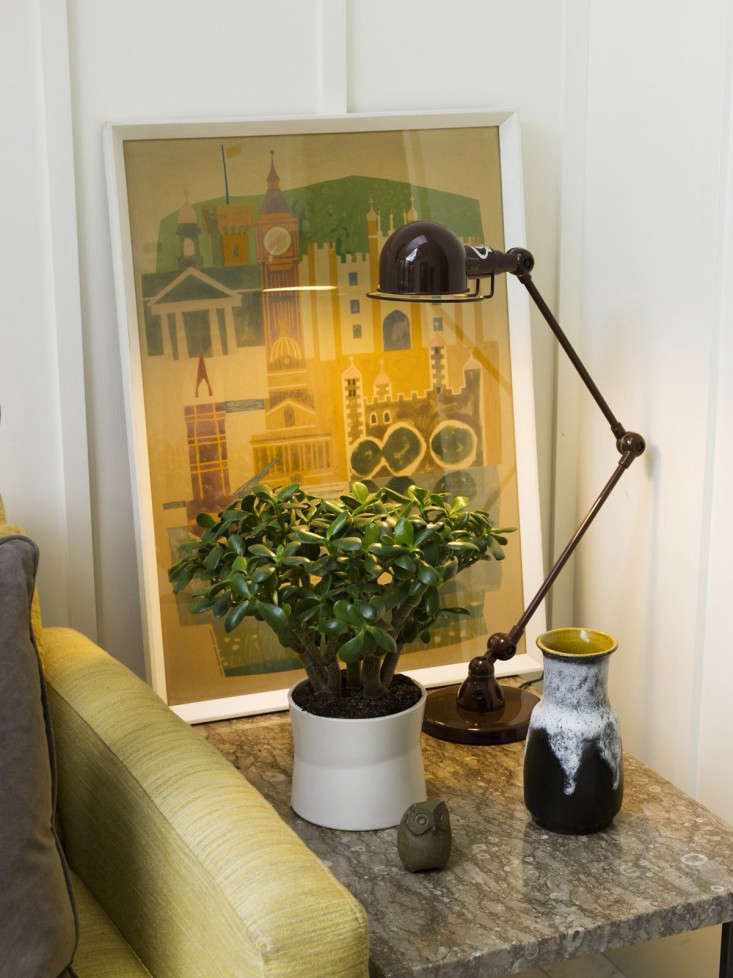 Above: The colors in the vintage print by British artist Kenneth George Chapman slot in perfectly with the designer’s overall palette. 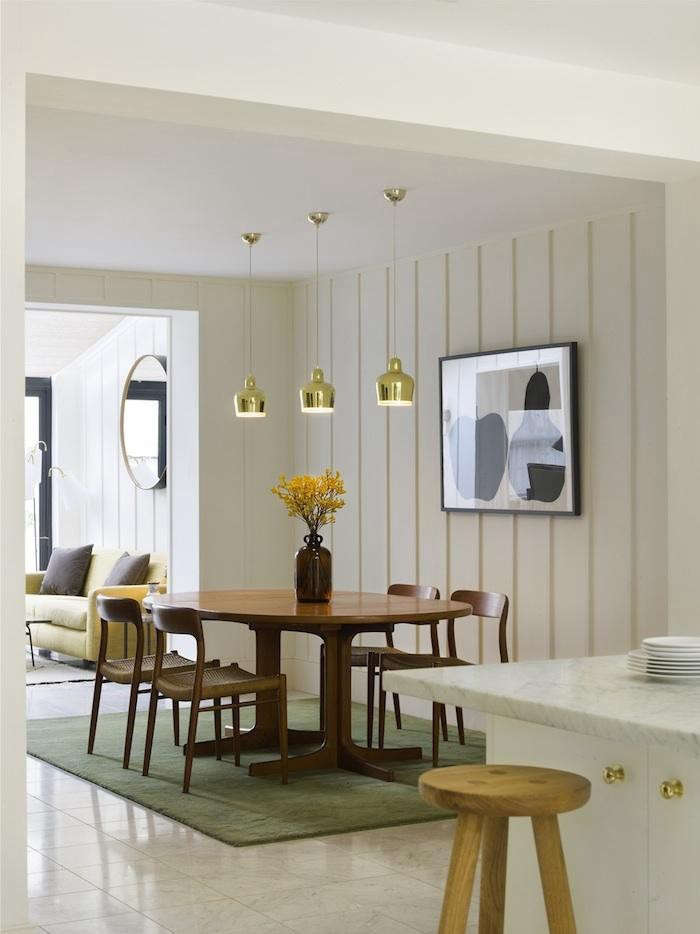 Above: Mellersh integrates the living, dining, and kitchen spaces, which are used throughout the day, into an open-plan basement layout. A vintage dining set by Danish designer Niels Möller and brass pendants by Finnish designer Alvar Aalto evoke a warm and casual feel. An Enzo Mari print from the 1960s completes the room. 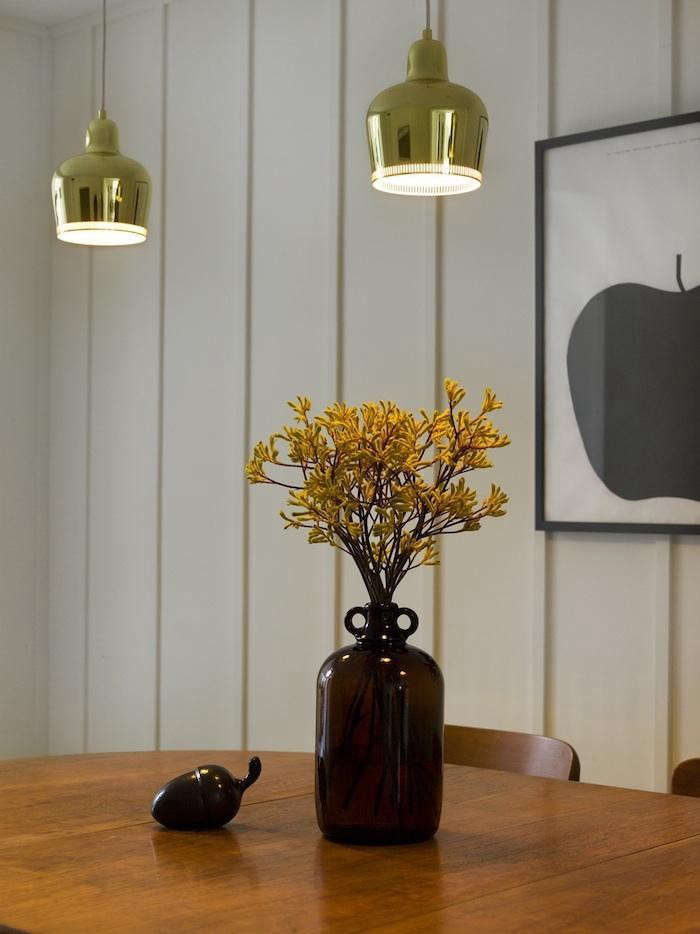 Above: “The board and batten panelling came later in the project and was a spontaneous response to my anxiety about anonymous white boxes,” Mellersh says. “I felt the basement-level living space needed some ‘meat on its bones’ so we added the paneling, and it instilled a much-needed layer of architectural interest.” 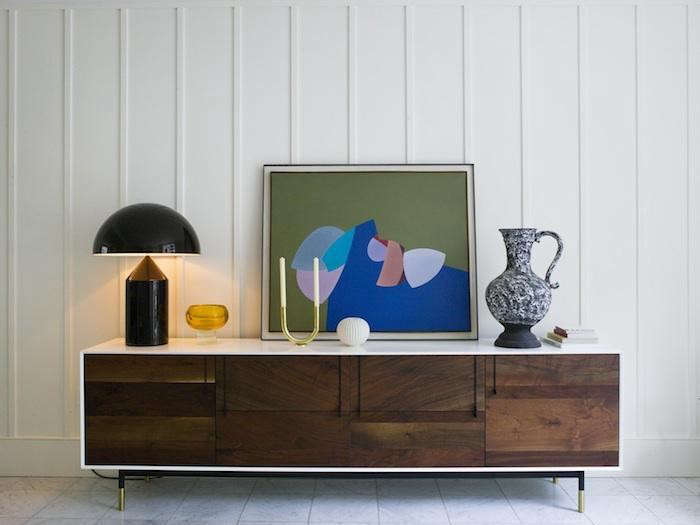 Above: Some of the client’s collectibles as well as newly sourced pieces sit on top of a walnut Lake Credenza from BDDW in New York. “The West German pottery vase adds an unexpected whimsical element to the conservatism of the vintage Scandinavian pieces elsewhere in the room,” Mellersh says. 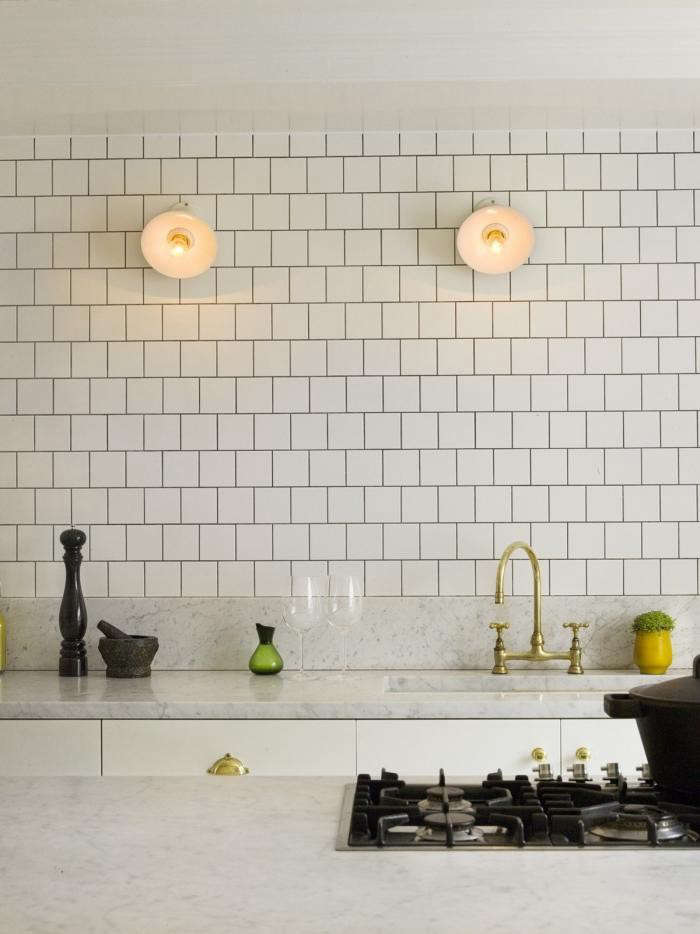 Above: “Materials are key to the central DNA of any project,” Mellersh says. “Different materials contain different messages embedded in them, and in this project, we wanted to translate a robust sensibility. So we chose matte rather than gloss tiles, honed rather than polished marble for the worktops and windowsills, and brass that would gain a weathered patina with age. It all combines to ground the feel of the kitchen and to warm up a room that might otherwise have felt sterile.” 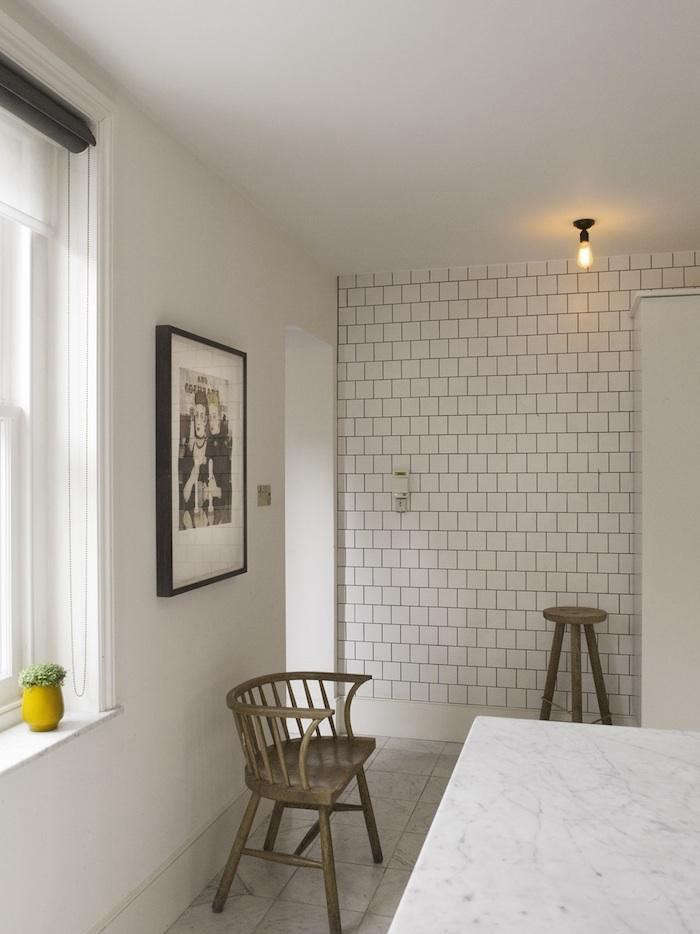 Above: A Three-Legged Oak Stool by Another Country and a vintage chair provide a subtle counterpoint to the pared-down aesthetic of the kitchen. 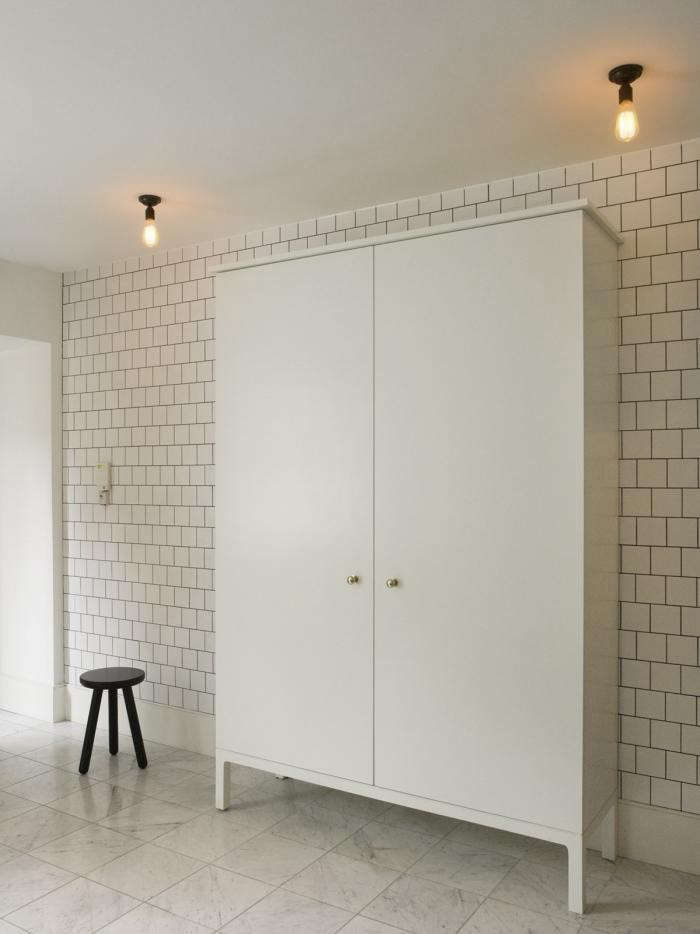 Above: Mellersh prefers to avoid kitchen-wall cabinets as a rule, and in this project his solution was to custom design a large cupboard where the clients can store all their glassware, appliances, and equipment, making it all easily accessible from a single point. 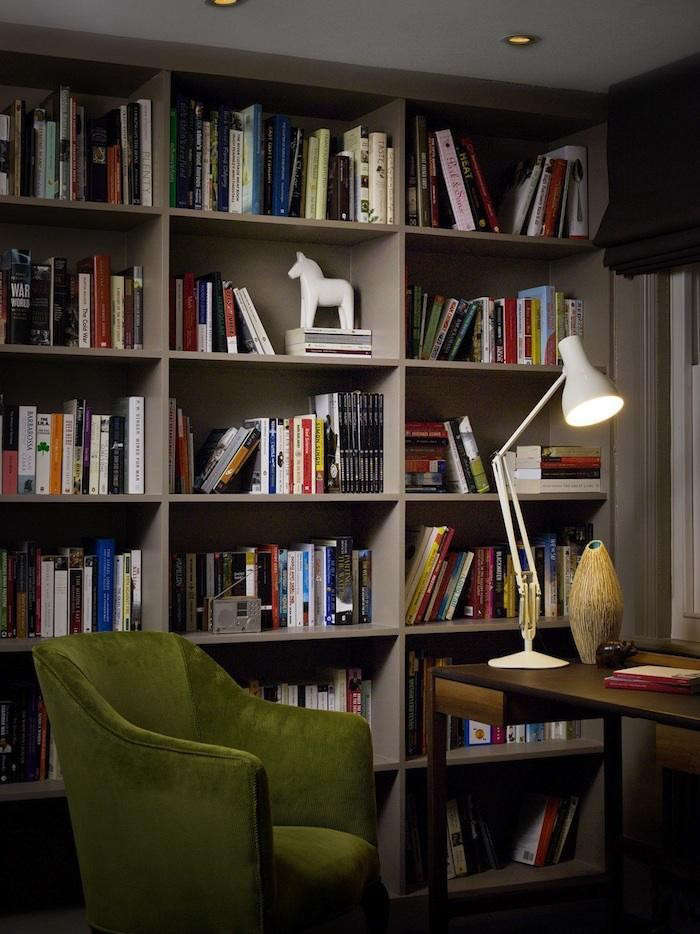 Above: “To have a room, no matter how small, dedicated to books is one of life’s simple luxuries,” Mellersh says. “And any excuse to use Farrow & Ball Charleston Gray is always welcome.” 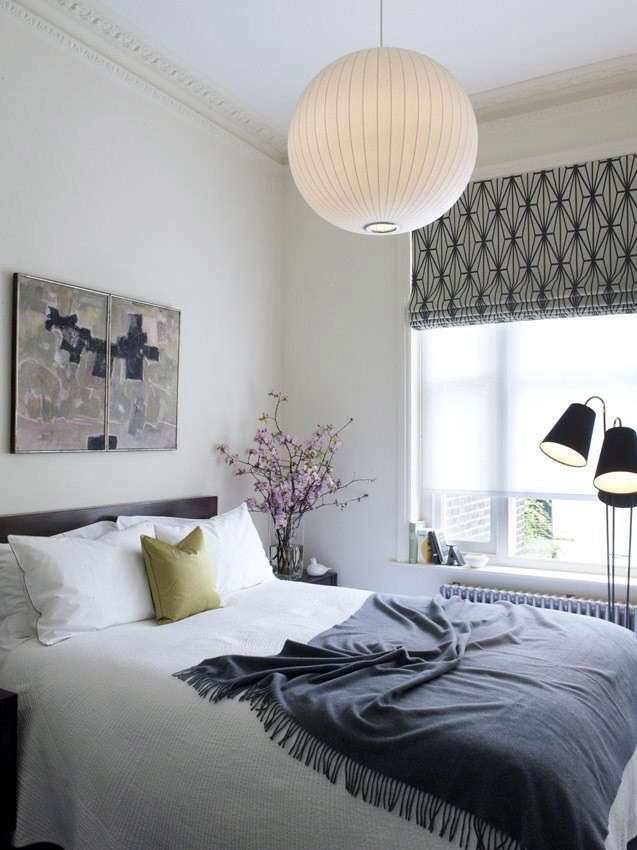 Above: “I fell in love with this painting (a 1940s French diptych) for its abstract elegance,” Mellersh says. “Luckily it felt just right for this particular bedroom.” The designer selected the Kelly Wearstler fabric on the blinds as a graphic counterpoint to the period cornice and the George Nelson Bubble Lamp for its diffused glow at night. 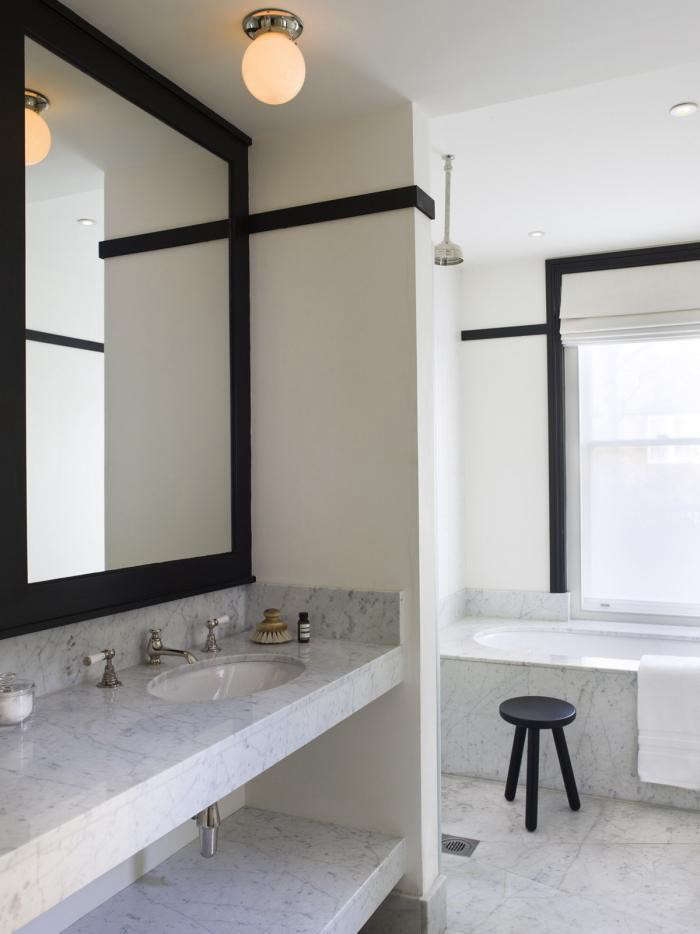 Above: Inspired by the atmosphere of “old-school” continental hotel bathrooms of the 1920s and 30s, Mellersh stained the mirror frame ebony, which prompted him to add a stained picture rail around the room as well. 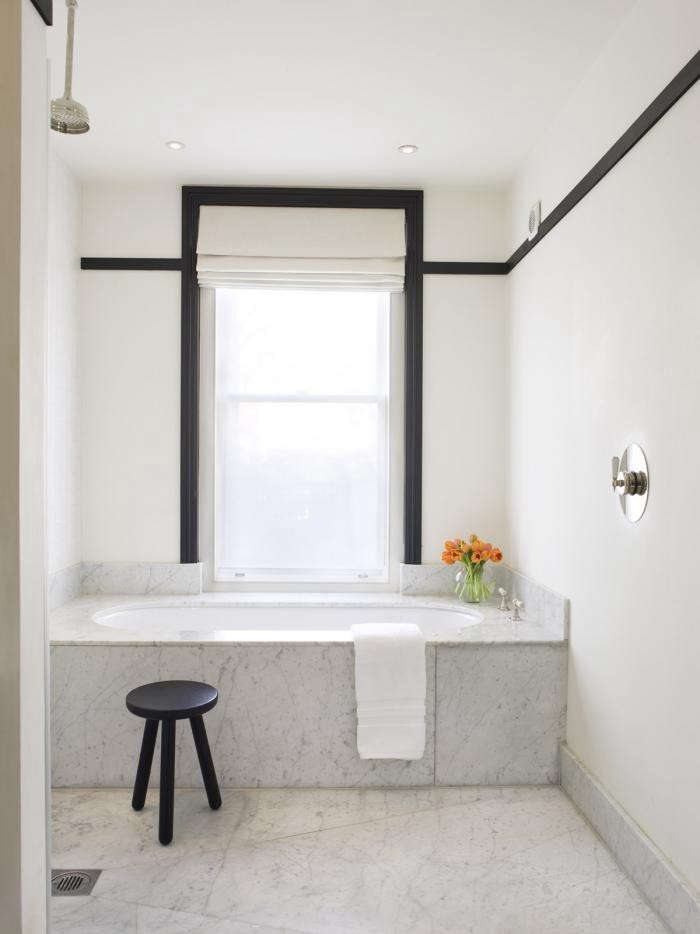 Above: “Staining the mirror frame and picture rail was a simple and spontaneous move, which paid dividends,” Mellersh says. “It had the very practical effect of energizing and somehow expanding the room–especially when you catch it reflected in the double mirror above the vanity.” 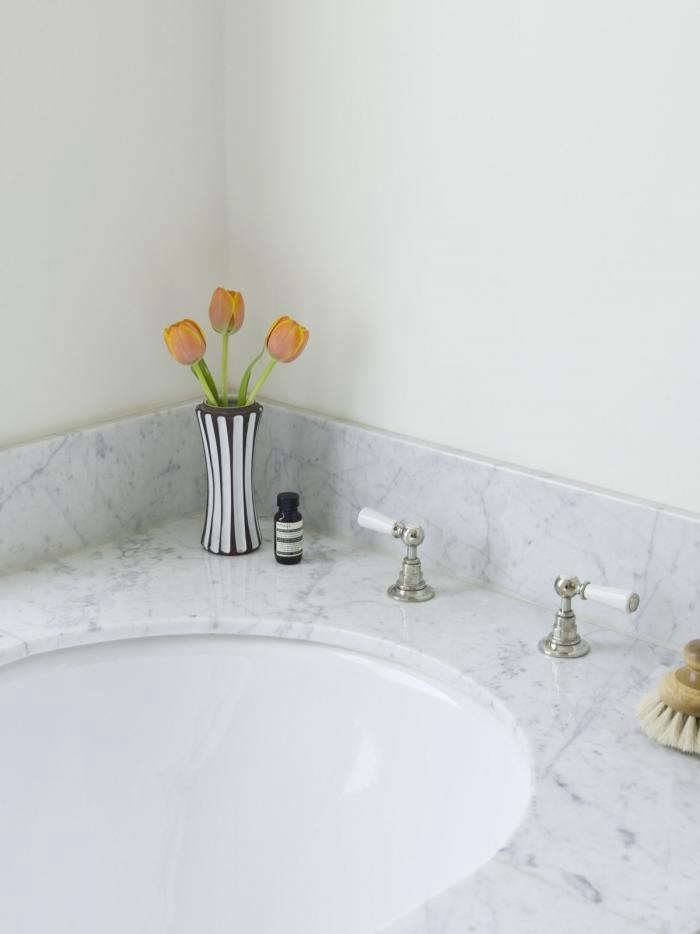 Above: “The lesson I learned with the paneling in the basement living area and with the stained picture rail in the bathroom is that while you need to plan your work rigorously, you should also always be open to spontaneity and the opportunity it brings,” Mellersh says. “Just like the vase, which was a last-minute finishing touch that I discovered at Portobello Market, just around the corner from the house.”

As a member of the original editorial team at Wallpaper Mellersh worked with with Tyler Brí»lé, now of Monocle, Alasdhair Willis and Paul de Zwart of Another Country, makers of contemporary craft furniture.  See Living Small in an Architectural Landmark, Brooklyn Edition to see how Brooklyn firm Workstead use Another Country furniture in their project.

Midcentury Modern in Barcelona: At Home with Elina Vila and Agnès Blanch of Minim