A young architect’s own home renovation can be like a grand DIY. Limited budgets and creative resourcefulness combined with architectural knowledge, training, and experience inevitably lead to clever solutions and interesting stories. This week, New York- and Texas-based Jen Turner tells us what it’s like to be the architect of her own renovation; a 1,350-square-foot 19th-century carriage house in Brooklyn. She is available for the next 48 hours to answer any and all questions. Ask away!

With a limited budget of roughly $60 per square foot and a compressed construction period of 42 days from the start of demolition to finish, Jen Turner (a member of the Remodelista Architect/Designer Directory) bravely decided to procure all the building materials (everything except for the sheetrock). “Ordering everything myself saved money, as normally a contractor would add a fee on top of the cost for the materials, but this meant I was also responsible for getting the right overage on the tile and making sure everything arrived in the right sequence,” she says. “This was stressful, and I wouldn´t necessarily recommend trying this at home.”

Turner does, however, have several more user-friendly tips for staying on budget and on time. “Having done extensive research I was able to make final decisions on schedule, which is one of the most important aspects of any successful project. I always recommend that clients do their research by compiling and organizing their images or links to ideas, materials, and products in a thoughtful way; this is invaluable to you as well as your architect and contractor,” she says. “Working within one’s budget is always challenging. As an architect, I am well aware of what´s available in terms of materials and fixtures and covet the same things I specify for my clients. So I had to strike a balance between the high and low. I went for a fairly neutral palette with varied, rich textures and spots of color.”

Photography by Mathew Williams for Remodelista. 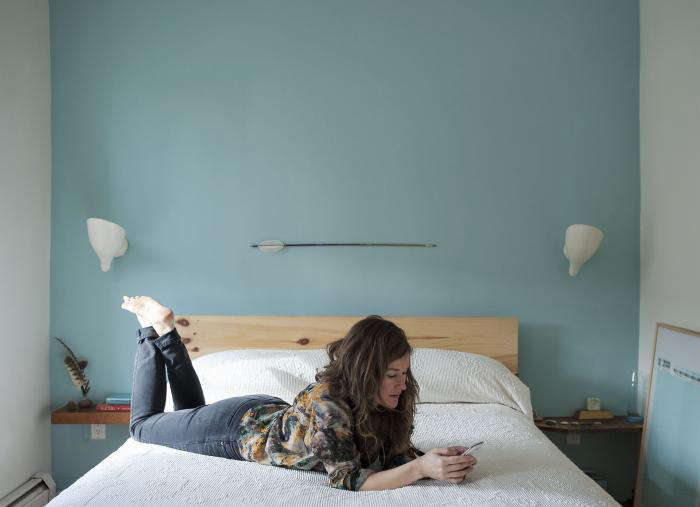 Above: The architect Jen Turner in her bedroom on the second floor of the carriage house. “On the feature walls and floors, I splurged with Farrow & Ball and used Benjamin Moore for the rest of the house,” she say. “The Farrow & Ball Blue Ground makes the room feel like it is in a cottage by the sea; a happy blue which is wonderful to wake up to.” 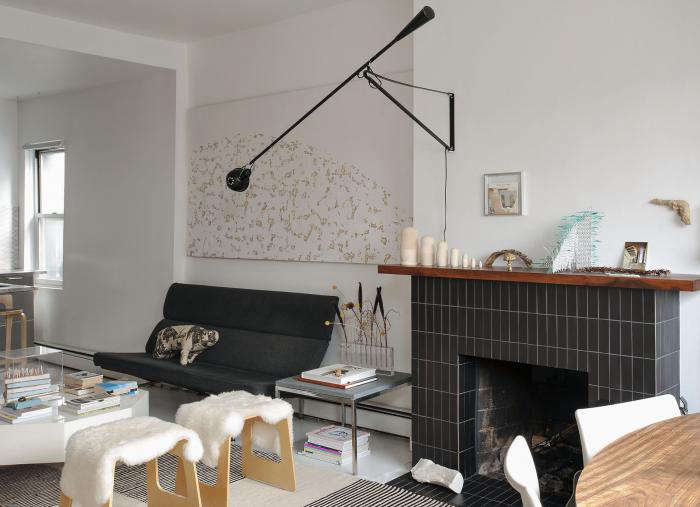 Above: The first floor of Turner’s house is essentially one large room with the kitchen and dining area at either end of the room and the living area in the middle. The painting on the wall, “Partial Map of the Known Universe with Loops,” is by artist and friend Kysa Johnson. “It´s created by using tiny repeated subatomic decay patterns,” Turner says. 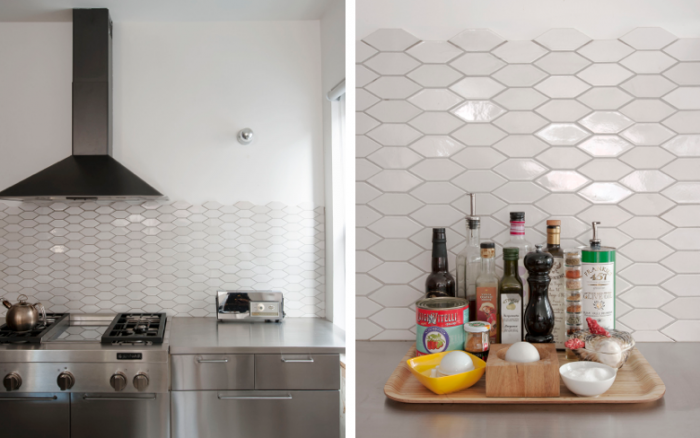 Above: “I splurged on tiles from Heath Ceramics because of the extraordinary depth of their colors (and non-colors) and handmade character,” Turner says. “The back splash tile in the kitchen is in Heath’s latest series, but they don´t produce a border tile for it. Since I chose the tile for its form and pattern, I felt that leaving the edge raw celebrated this aspect.” 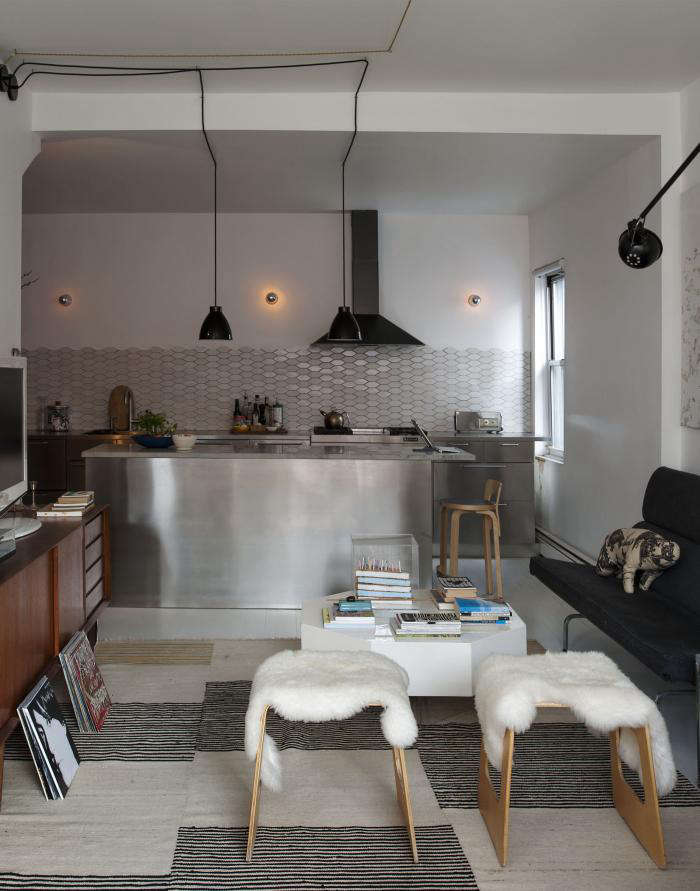 Above: Turner’s decisions in the kitchen are an example of her balancing act between high and low. The cabinets are from Ikea, which Turner and her architect sister assembled themselves over one weekend. Given the open nature of the multi-function room, she avoided upper cabinets and a full height refrigerator for a more integrated overall aesthetic. “For the kitchen splurges, I went with fridge drawers (I’ll never go back!) and custom stainless steel panels to keep the kitchen quiet and monolithic,” she says. “With a bigger budget, I might have used another material for the island surround to warm it up, but these are the things we learn and improve upon next time.”

Above: An example of Turner’s creative resourcefulness; making a feature of her lighting cords by arranging them into a geometric pattern on her ceiling. 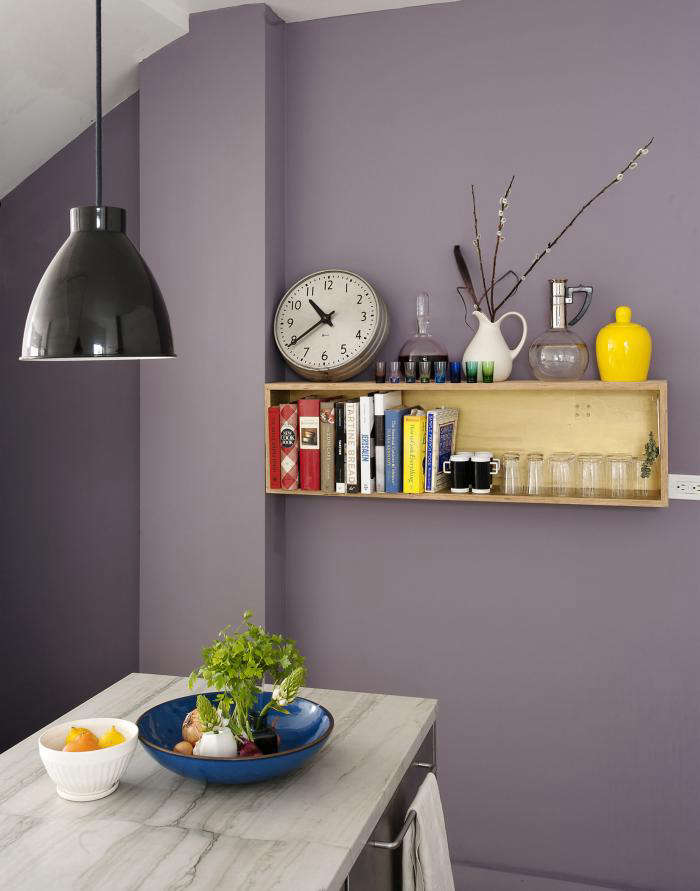 Above: Turner used a quartzite stone called Luce de Luna for the countertop of her kitchen island; it resembles marble but is a bit less porous so less susceptible to staining. “The box on the wall is an old piece of millwork a contractor gave me when I renovated one of my first apartments in Williamsburg,” she says. “It was built to be used vertically with adjustable shelves and I´ve carried it around from place to place, using it in different spaces. Here it´s a place holder for a bigger, nicer future cabinet. So I filled the shelf holes, turned it on its side and painted it gold on the interior. 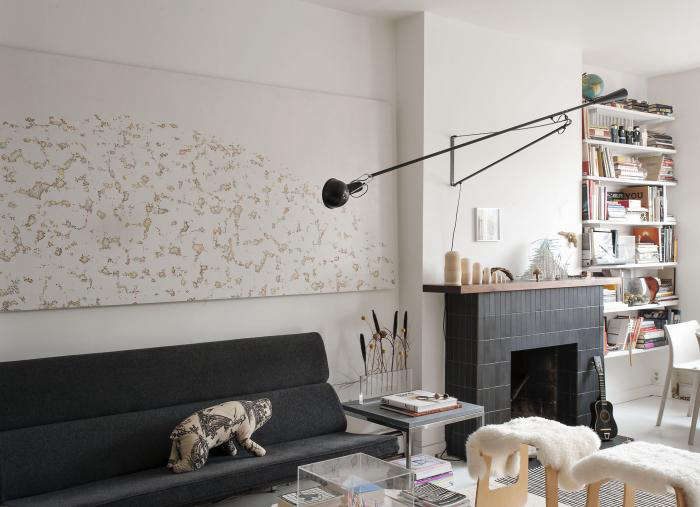 Above: Turner used a neutral palette to create a background that would accommodate her high/low design approach. The existing fireplace was partially rebuilt and finished with matte black Heath tiles, which are practical for masking smoke residue. “While the Eames Sofa Compact was one of the first (actually only) fancy pieces of furniture I ever bought, the stools are from IKEA,” she says. “I had used them as bedside tables for years and so their tops were not in very good condition. When I was at Ikea shopping for my kitchen cabinets, I saw the lamb’s wool throws and thought they were a perfect no-fuss solution for extending the lifespan of the stools by a couple of years.” 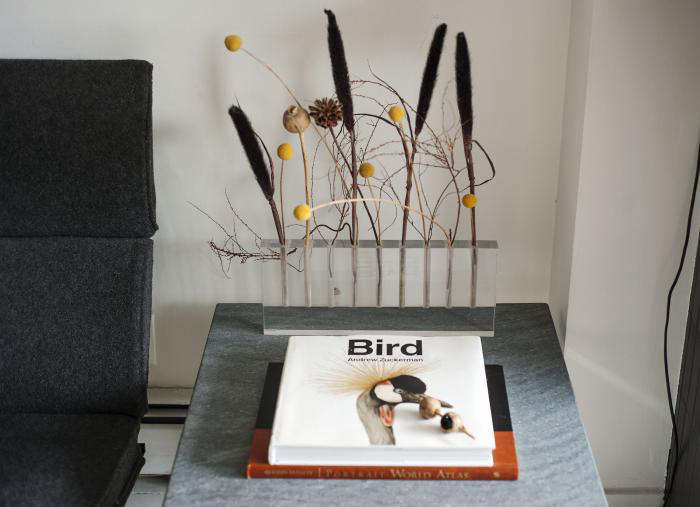 Above: Turner’s home is filled with vignettes composed of natural objects she has collected on her travels or on hikes. “I love strange flowers and they seem to dry nicely, like the yellow ball ones and the poppy bulbs,” she says. “The dark purple ones are millet that I bought at the San Francisco farmers market just before flying back to NYC. I´ve been known to ferry peculiar things via plane.” 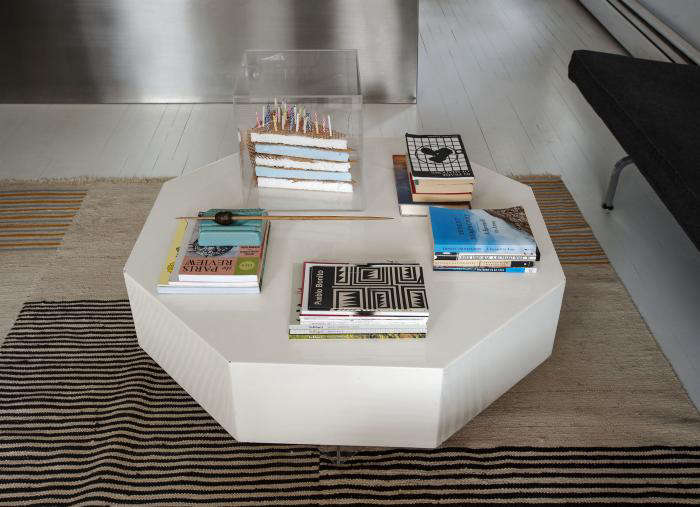 Above: A birthday cake made out of random packing materials, which Turner finds fascinating and collects, sits on a vintage Jonathan Adler table which she purchased at a sample sale for $30. 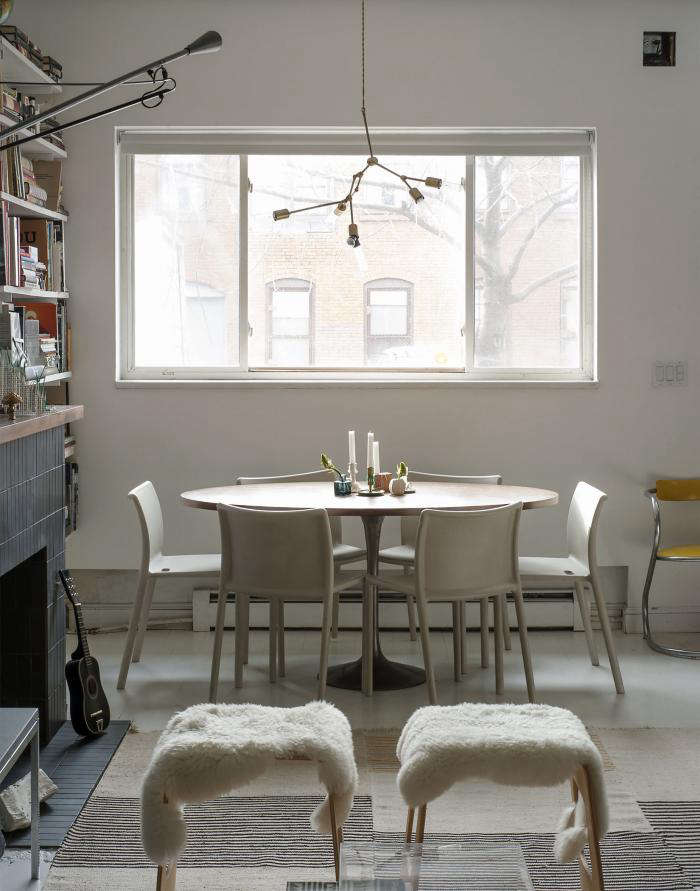 Above: Turner’s dining area is comprised of a Lindsey Adelman DIY chandelier and a dining table whose base she purchased from a reclamation store in Redhook, “one of those places that you literally have to excavate things from the ceiling-high formations of furniture and bric-a-brac.” The wood tabletop was made by a millworker as a ‘thank you’ on a library project Turner worked on with him when she was working at Tod Williams Billie Tsien Architects. 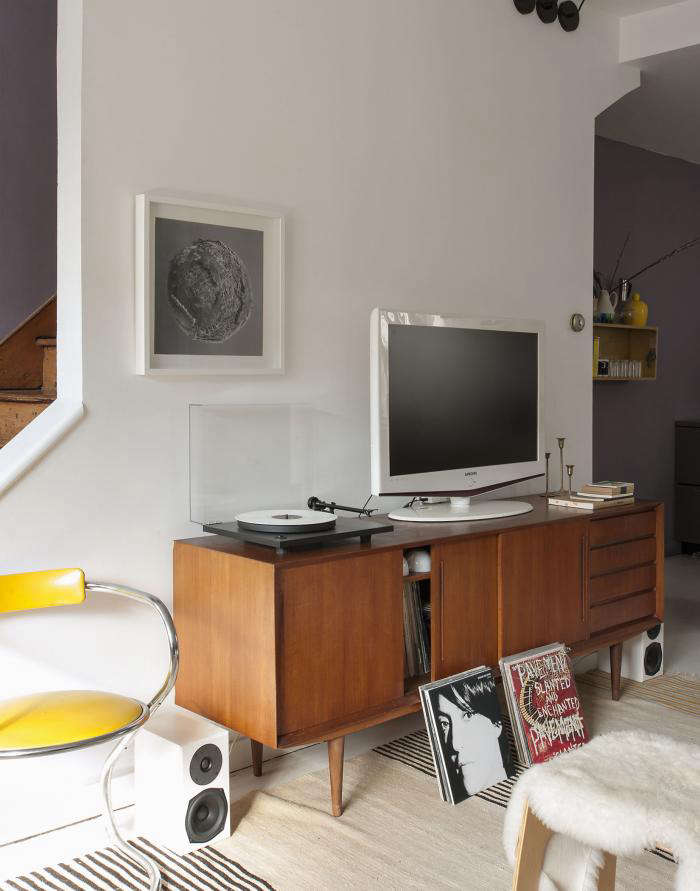 Above: Turner feels some music types and musicians, including the Blues, Fela Kuti, and Cat Power, sound lusty and better on her Rega Planar turntable, which she loves for its “excellent function and beautiful, simple design.” Sitting at a bus stop in Queens on the way to a friend’s barbecue, Turner spotted her yellow chair. Drawn to its form and color, she brought it home with her. “Funnily enough, I walked into ABC carpet a couple of years later and saw four of these chairs newly upholstered at $1,300 each,” she says. 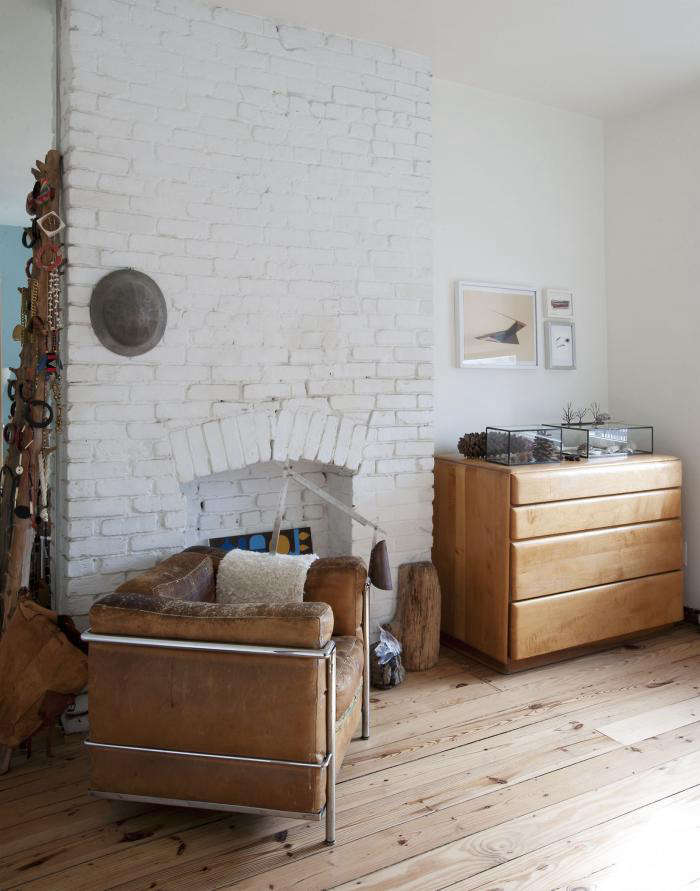 Above: A vintage Le Corbusier armchair and midcentury dresser maintain Turner’s neutral palette in the sitting area of the master bedroom. 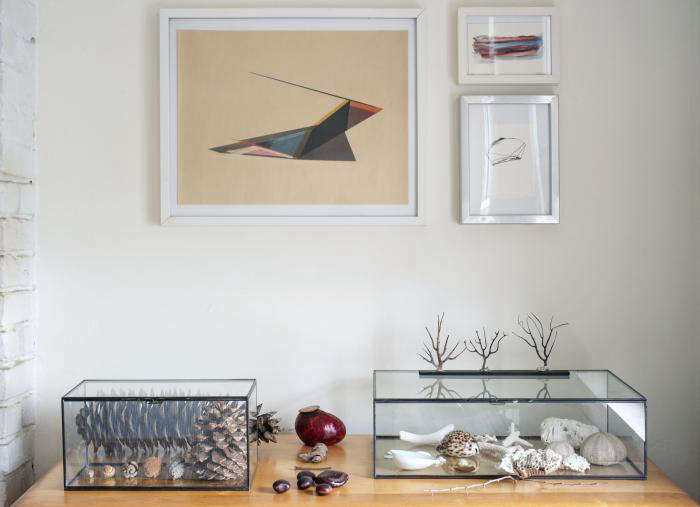 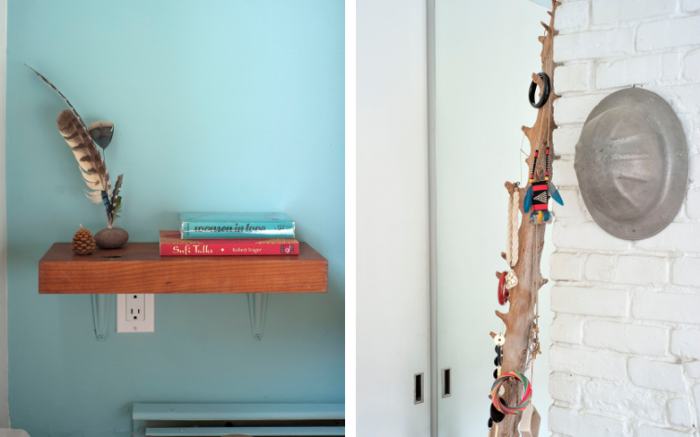 Above L: Turner converted a solid walnut millwork sample from a past job into a bedside table. Above R: Colorful jewelry hangs from a branch she found in Connecticut. 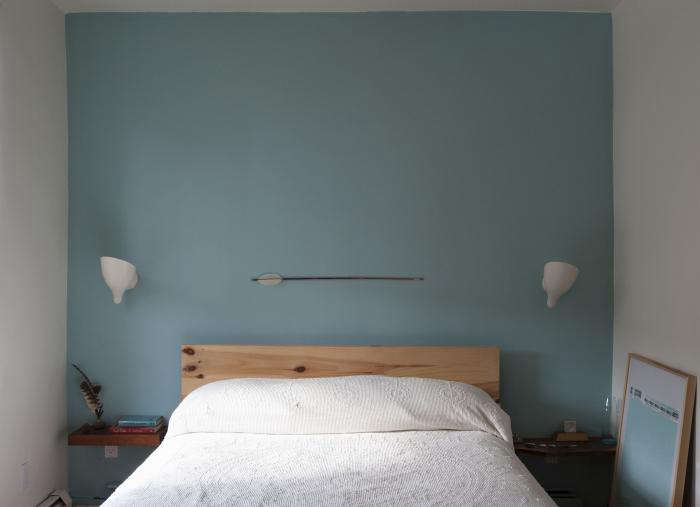 Above: The wood headboard with bookshelf and secret storage drawers is one of Turner’s own designs, which she has named The Marfa in homage to Donald Judd. 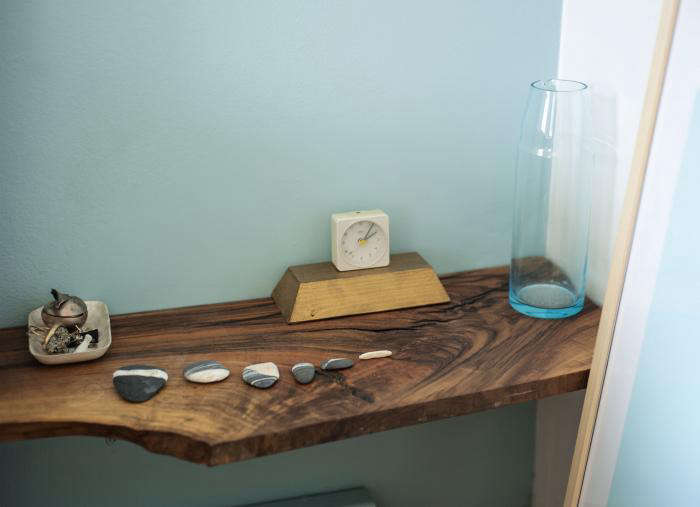 Above: The French walnut shelf is another job sample that Turner re-purposed into a bedside table. 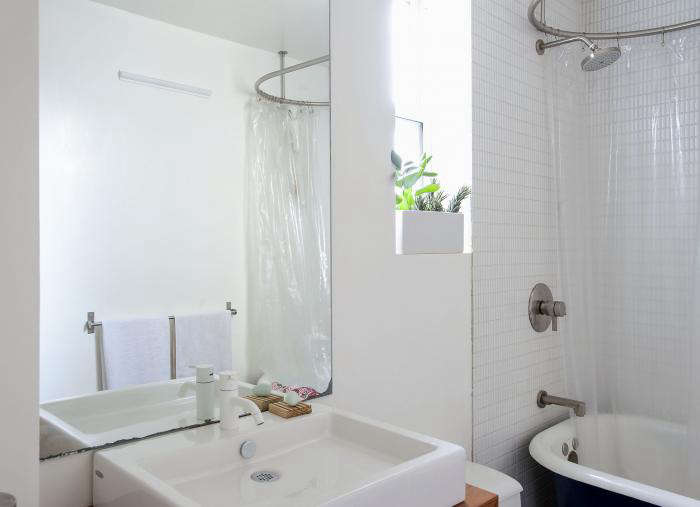 Above: The only thing Turner kept from the original bathroom was the toilet. The American Standard bathtub, which she painted a deep blue, was salvaged from a convent in Brooklyn. 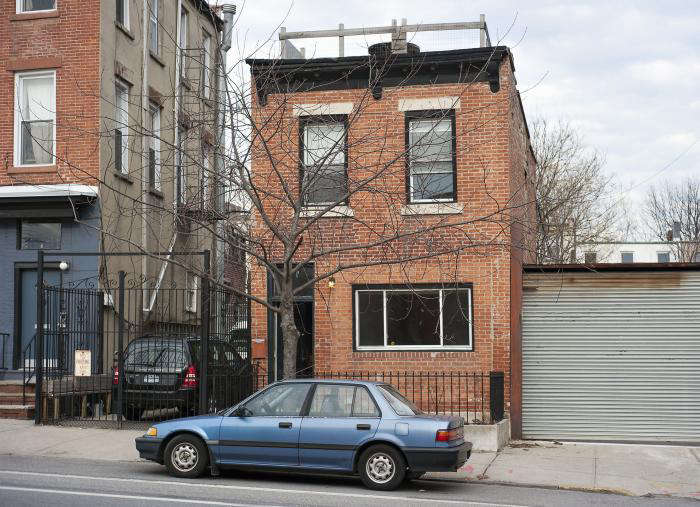 Above: The brick infill on the front facade of Turner’s two story house in the Carroll Gardens section of Brooklyn leads her to believe it was originally a carriage house for the building next door.

Has Jen Turner’s architectural DIY got you into the mood for a weekend project? See 263 of our favorite DIY projects.