When the proprietors of new SF restaurant Souvla contacted us recently, we were happy to learn 1) that owner and designer Charles Bililies is a Remodelista devotee (he found inspiration for his design on RM), and 2) that the food is inspired by the simple, rustic cuisine of the Greek islands. Bililies, an alum of Thomas Keller and Michael Mina ventures (most recently RN74), has been ruminating over Souvla for a long while. After a decade of working in restaurants, Bililies took a recent trip to Greece where he undertook all manners of painstaking research for Souvla, eating and drinking included.

He eventually landed on a restaurant concept named for the traditional meat-roasting method that forms the cornerstone of the Souvla menu. (Their version of a “souvla,” or rotisserie, is a gigantic Rotisol French roaster: “the Ferrari of roasters,” according to marketing manager Jen Pelka.) Curious, I stopped by last week to chat with Bililies and Pelka, the day before Souvla’s official opening. Here’s my report: 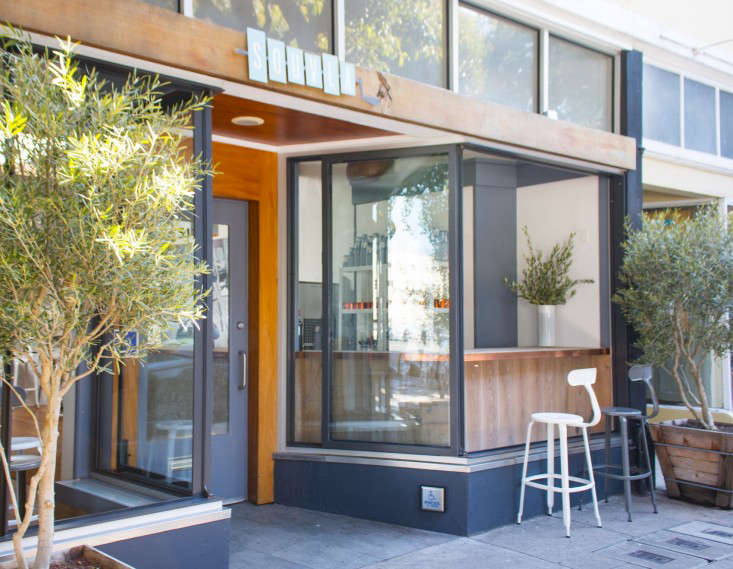 Above: Souvla is located in SF’s Hayes Valley neighborhood. Owner Charles Bililies designed the space in partnership with Brian Ford of Metropolis Design. 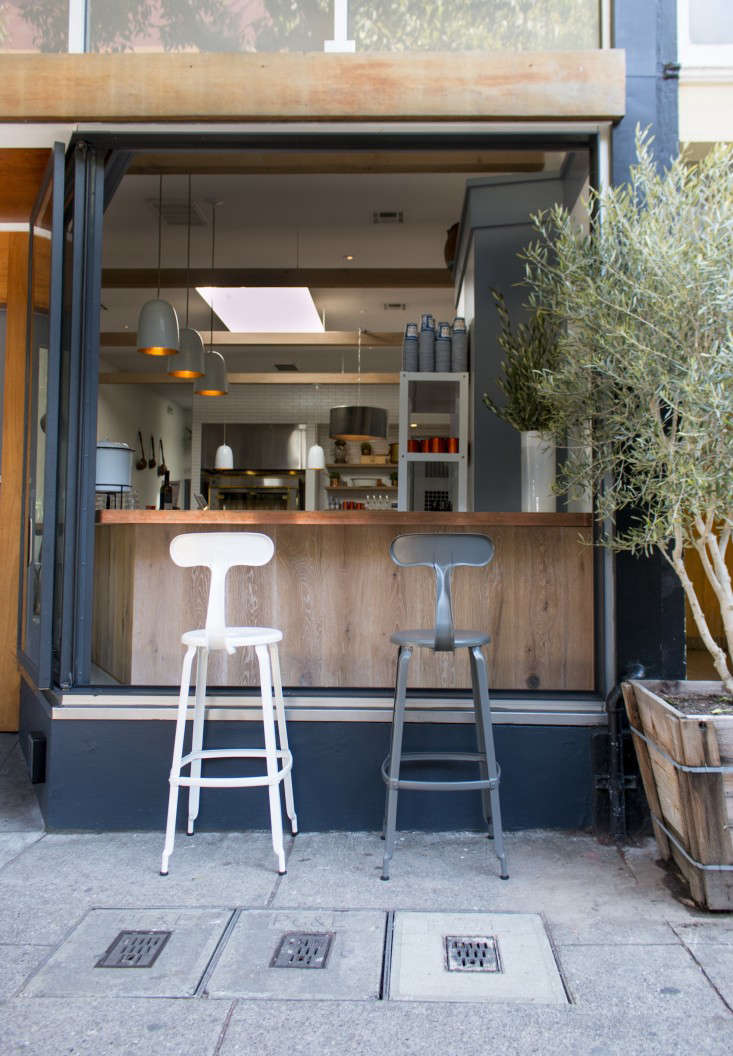 Above: The outdoor seating arrangement is still being tweaked, but at least a few seats will be outdoors next to the olive trees. 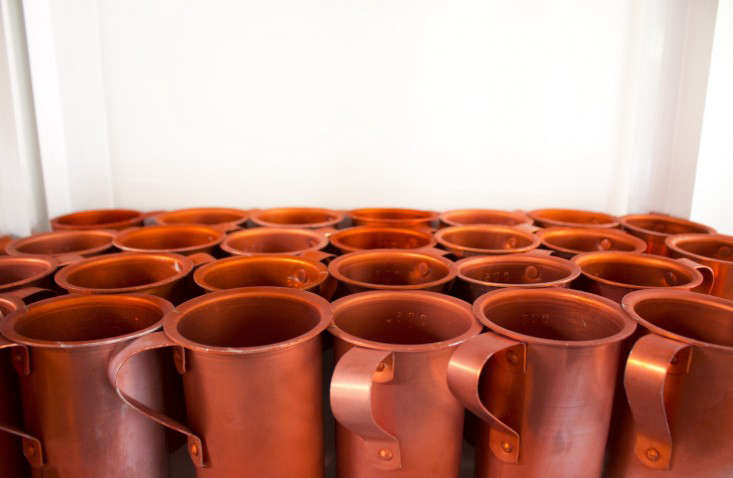 Above: On his research trip to Greece, Bililies saw wine served in traditional copper carafes and adopted the practice at Souvla. The restaurant offers Greek wine by the glass, bottle, or 250ml or 500 ml carafe, alongside Greek beer and cherry soda. 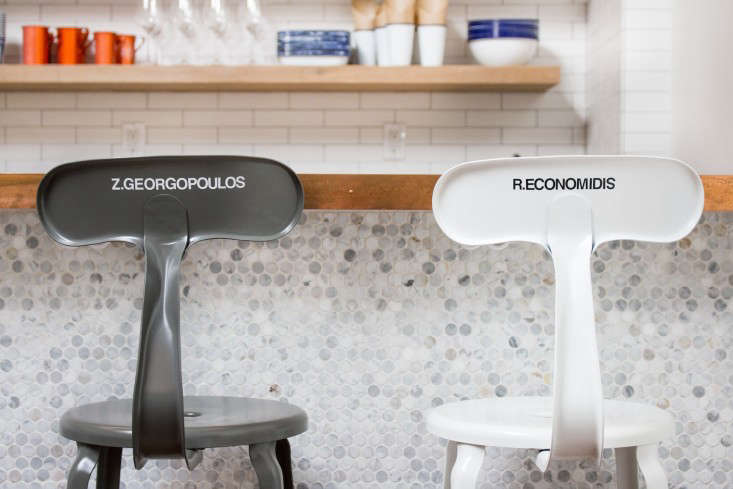 Above: Keeping the gods happy: two Restoration Hardware stools at the back counter are honorarily “reserved” for Bililies’ lawyers. 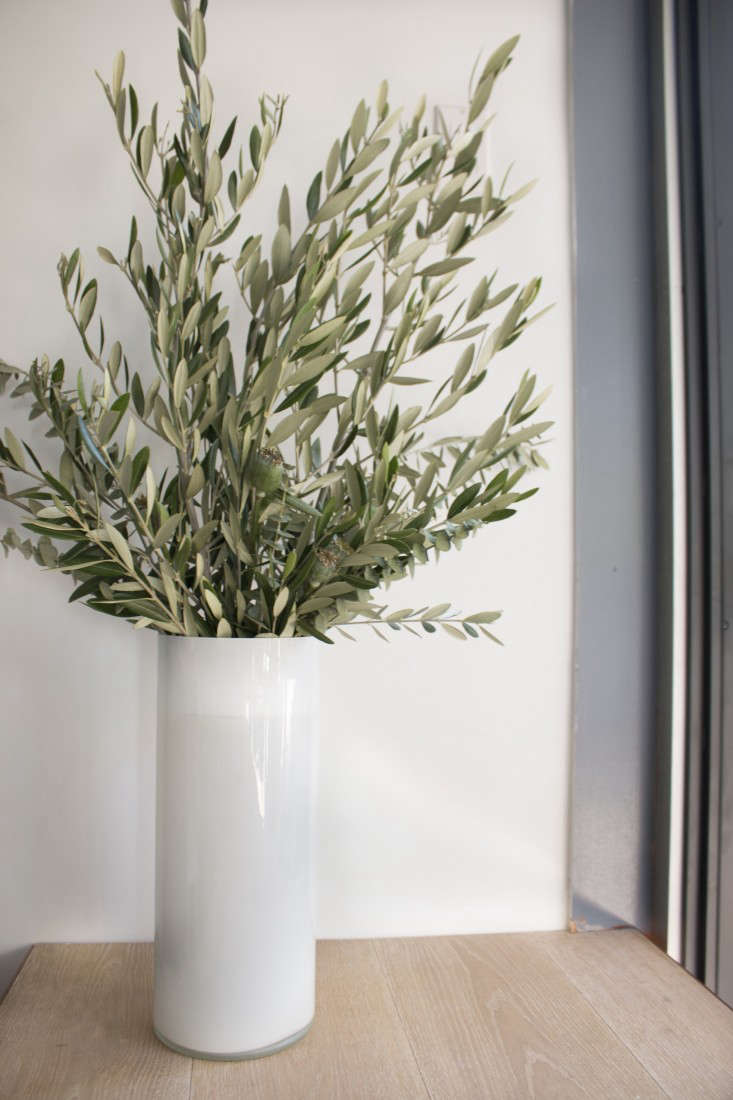 Above: Olive branches displayed in a modern vase show off Souvla’s barely-gray take on the traditional blue-and-white Greek color scheme. 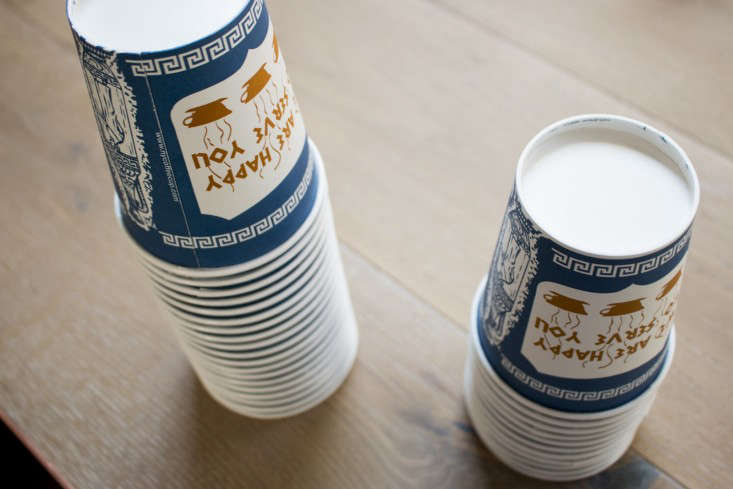 Above: Paper coffee cups waiting to be filled with Greek frozen yogurt to go. 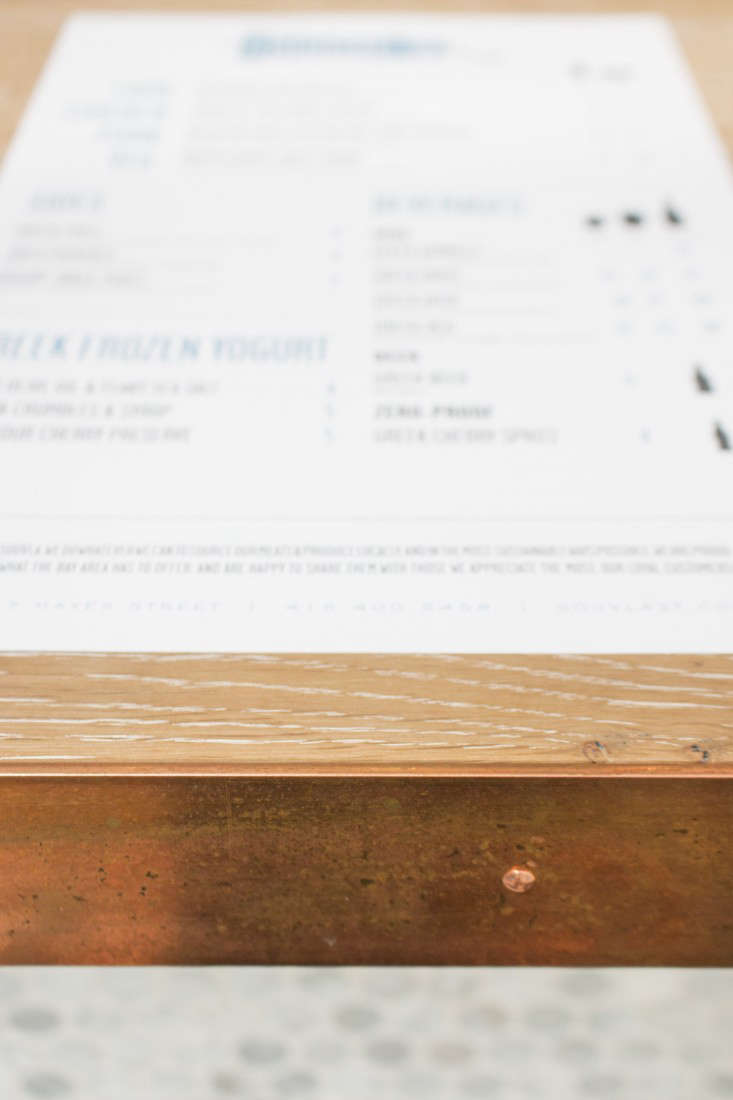 Above: The Souvla menu is short and well-priced: main courses are available as salads or sandwiches, wrapped in Souvla’s housemade, daily-baked pita. (Note the patinated copper edging at the bar, finished with copper nails.) 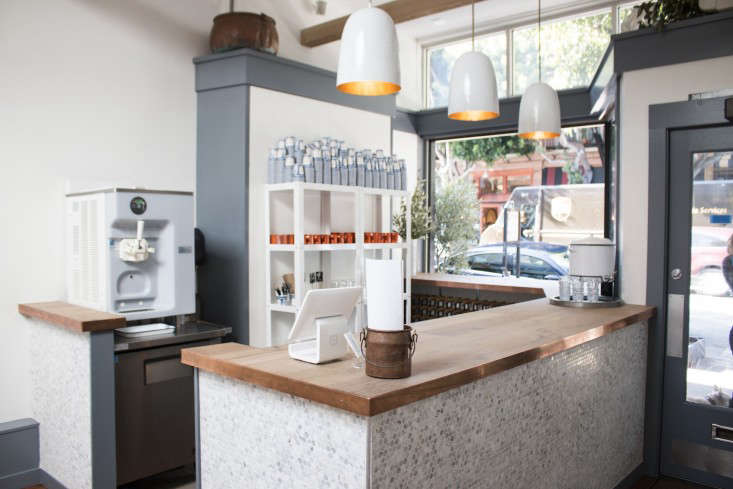 Above: Bililies chose oak flooring for his wood countertop surfaces for its durability. Copper edging and copper tabletops were custom made by Berkeley metalworker Chris Mast and pre-aged. 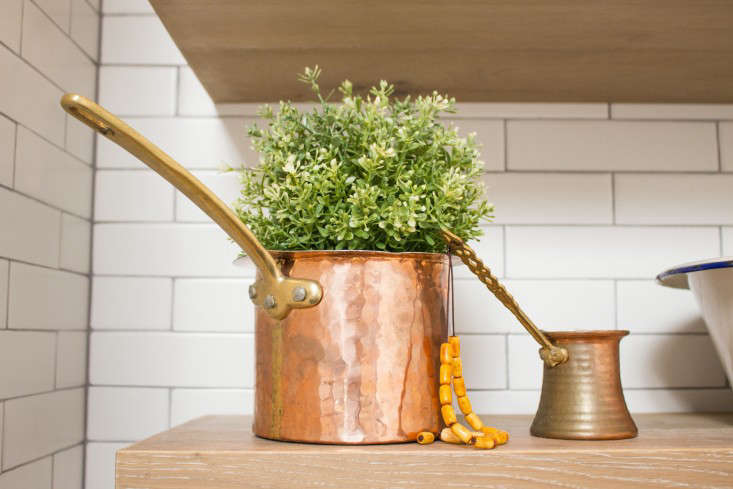 Above: Greek hospitality is in Bililies’ blood: his grandfather ran a Greek diner in Boston 50 years ago. Antiques from that restaurant now line the walls of Souvla: here, a copper stock pot, a traditional coffee pot, and a string of Greek prayer beads. 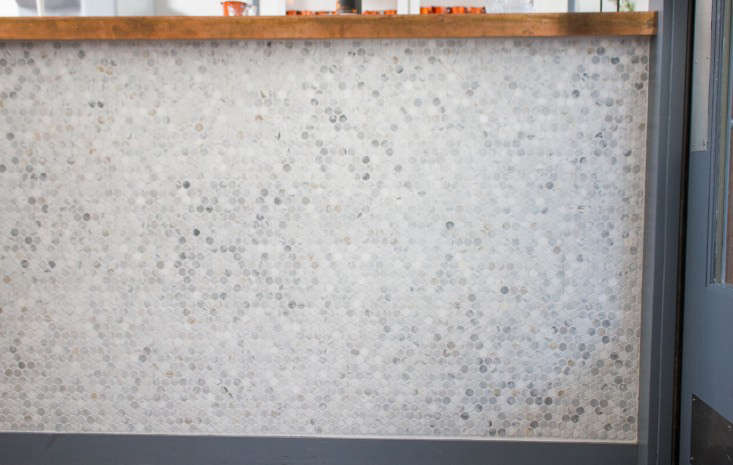 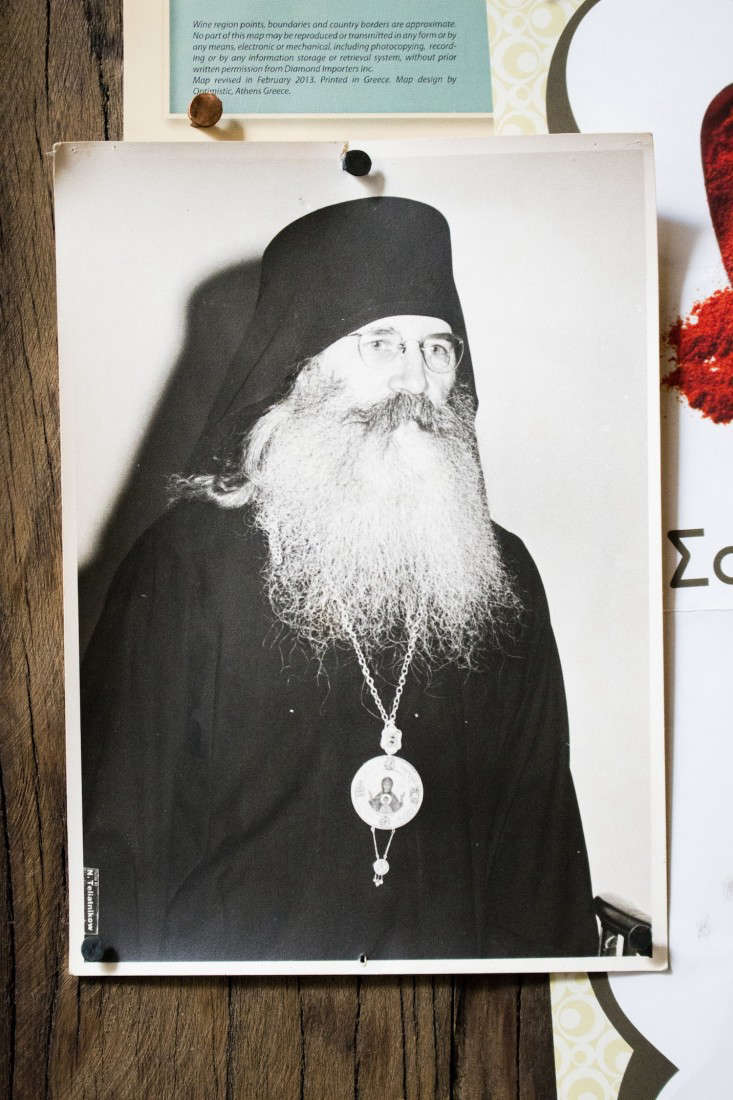 Above: Greek memorabilia in the bathroom includes photos, notes, and antiques. 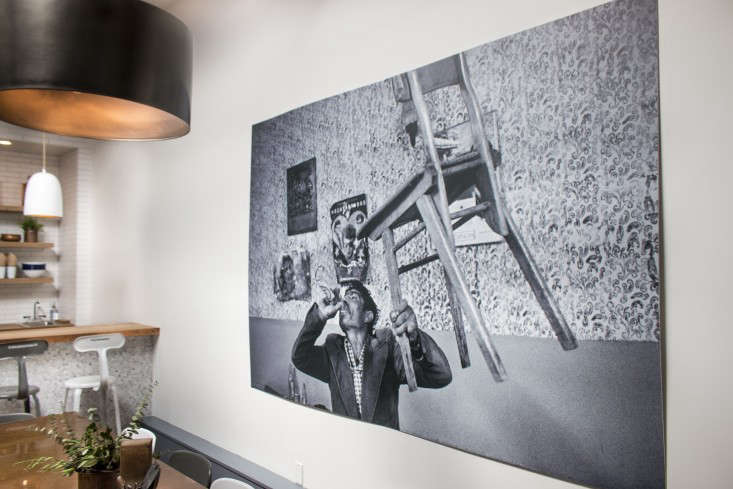 Above: A communal dining table sits beneath a photograph by Nikos Economopoulos, taken in Alexandroupoli in the early 1990s. (Pelka called it the “original sobriety test.”) 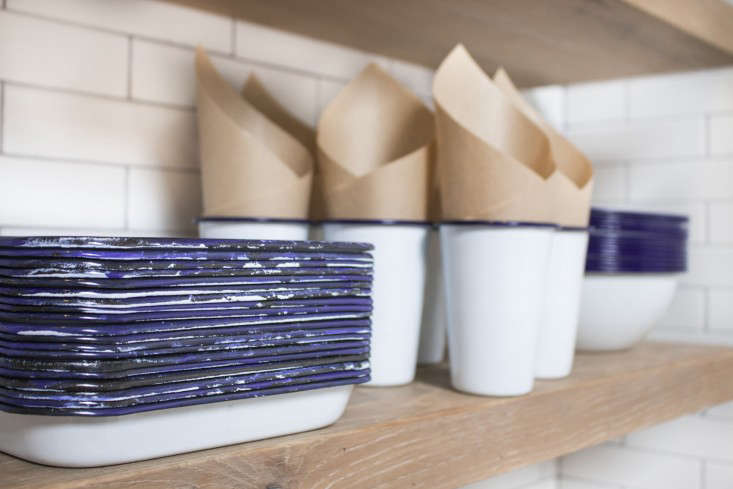 Above: Food is served in enamelware. 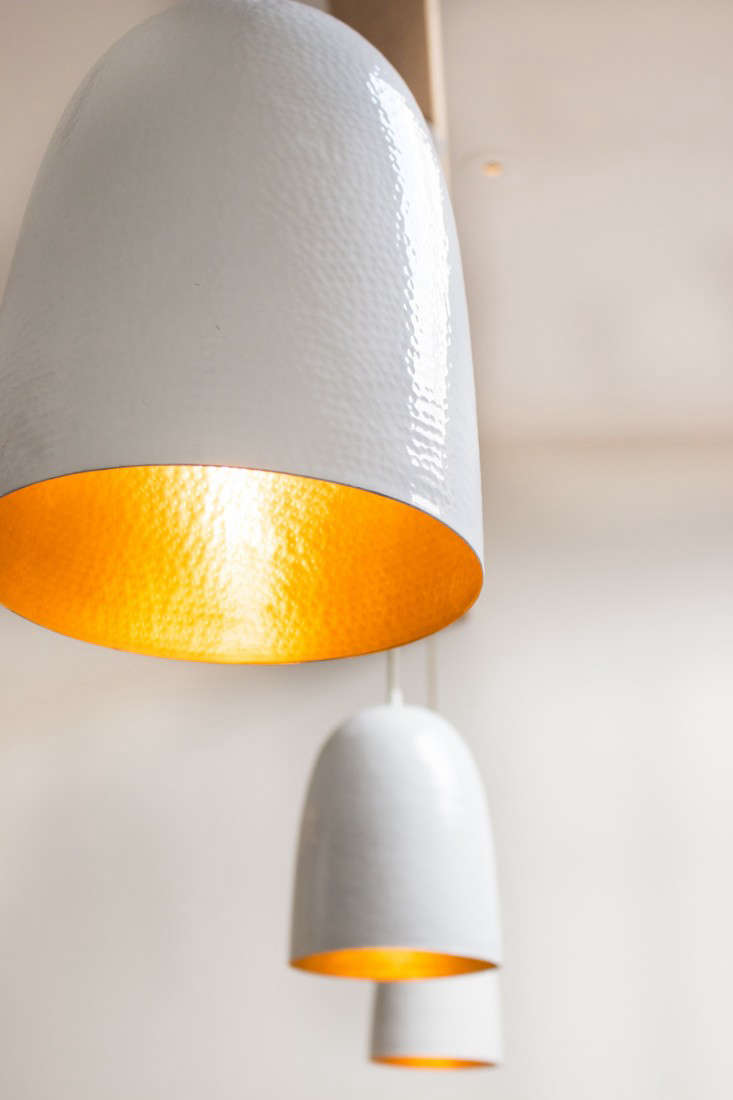 Above: The white pendant lights are from Crate & Barrel. The ceiling beams are ornamental.

Seeking more Greek inspiration? See An Aegean Idyll on a Greek Island; A Greek Taverna on the Beach–Breeze Included; and on Gardenista, DIY: Whitewashed Greek Walls.

Trending on Gardenista: Green Eggs and Other Signs of Spring