For the past 20 years, Nick Jones of Soho House has been establishing private clubhouses around the world for an elite community of creatives (think film, media, and design-industry heavyweights.) Soho House has outposts in, among other places, London, New York, Miami, Berlin, and now Toronto, where Jones has restored a grand mid-1800s brick structure that was one of the city’s first hotels. With three floors (plus a rooftop) of lounge areas, bars, and dining areas, there are plenty of places to get comfortable. It’s for members only, but we got the staff to open the double front doors and let us have a look around. 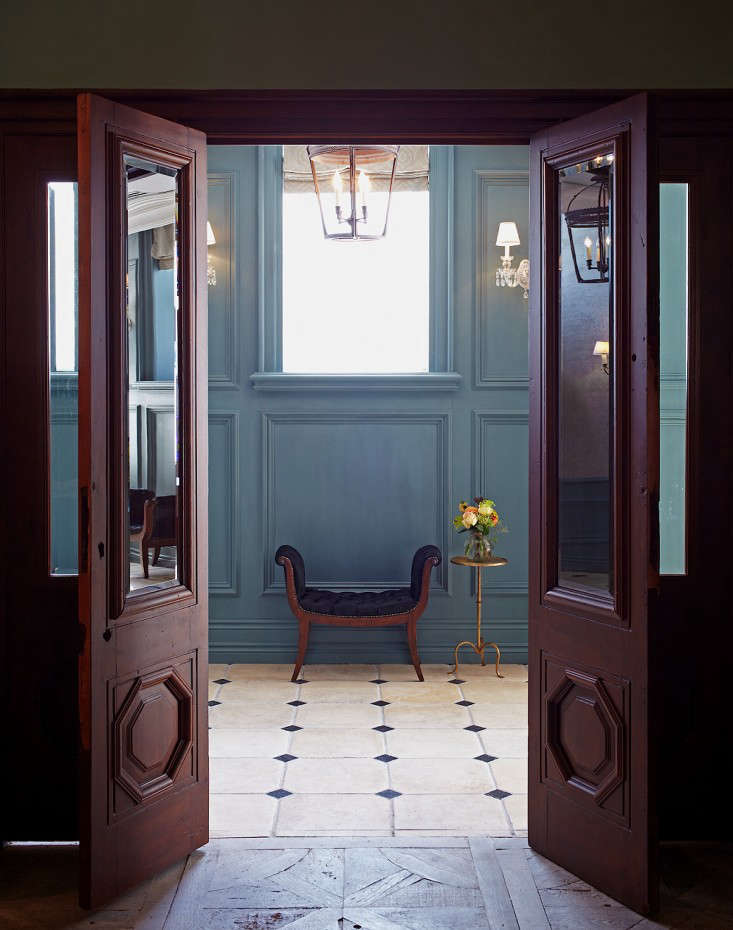 Above: Soho House always works with local designers and architects when setting up in a new city. To give his project a Toronto-specific look, Jones recruited interior design firm The Design Agency, who restored the building’s Georgian Colonial detailing and gave it a timeless, clubby look. Shown here, the wood-paneled entry painted a sky blue to contrast with the red-stained double doors. 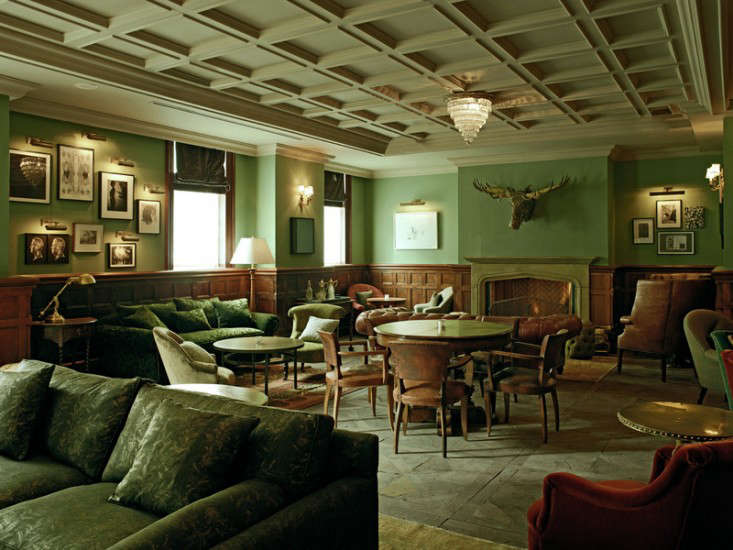 Above: Located on the first level, the Club Floor has warm wood paneling at wainscot height that echoes the coffered ceiling pattern. Velvet-upholstered sofas are mixed with vintage furniture, offering members and guests a variety of seating areas to mingle and hobnob. 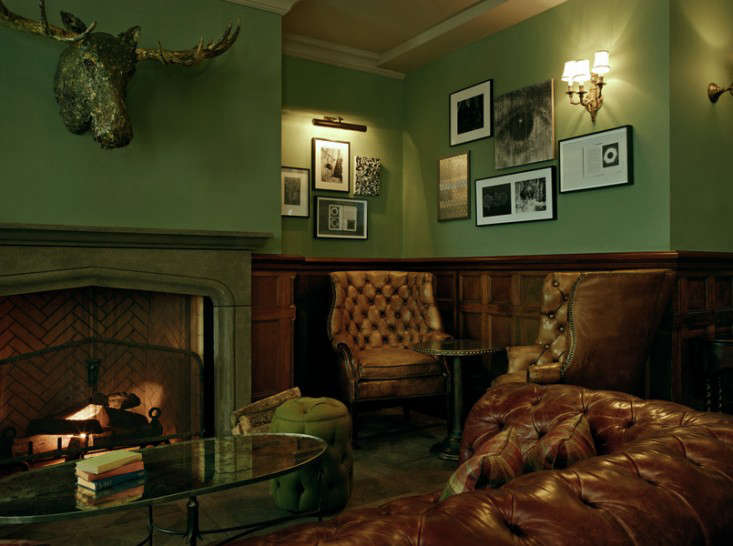 Above: A leather-covered Chesterfield sofa and pair of tufted wing chairs surround the Club Floor fireplace. Go to 10 Easy Pieces: the Wingback is Back for armchair ideas. 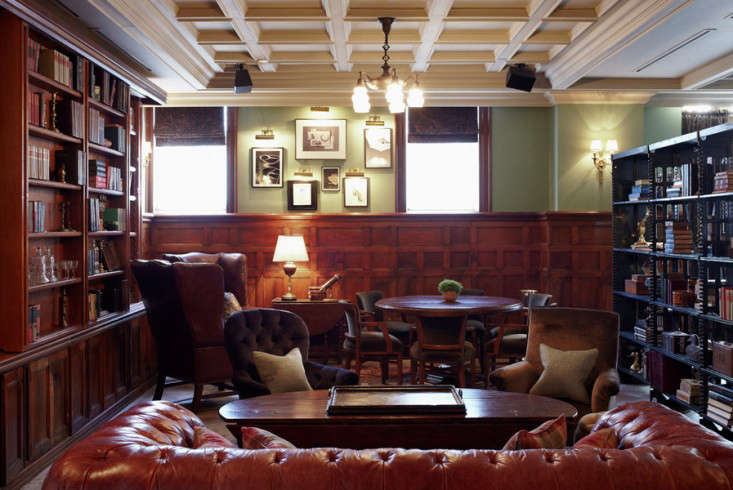 Above: A corner is devoted to bookworms. Every month the clubs hosts a “Literary Lounge” featuring talks with writers. 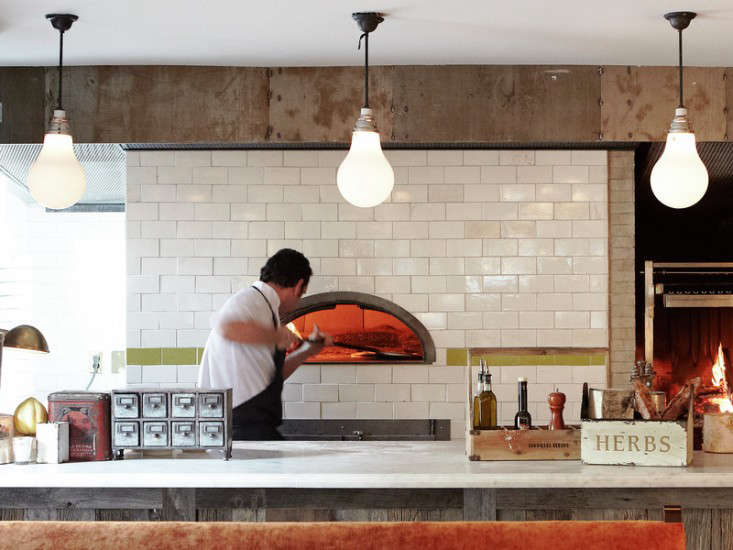 Above: In the open kitchen of the Club Restaurant, subway tiles and various unfinished woods create an informal atmosphere. 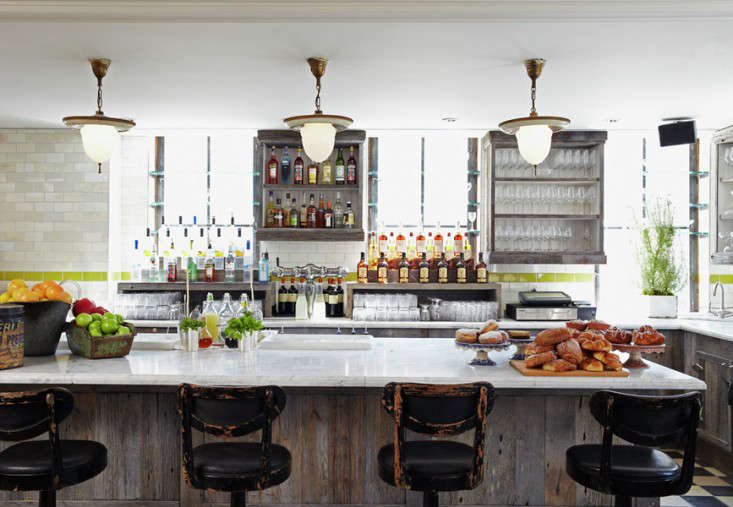 Above: With stools around an island, the bar has a homey kitchen feel. 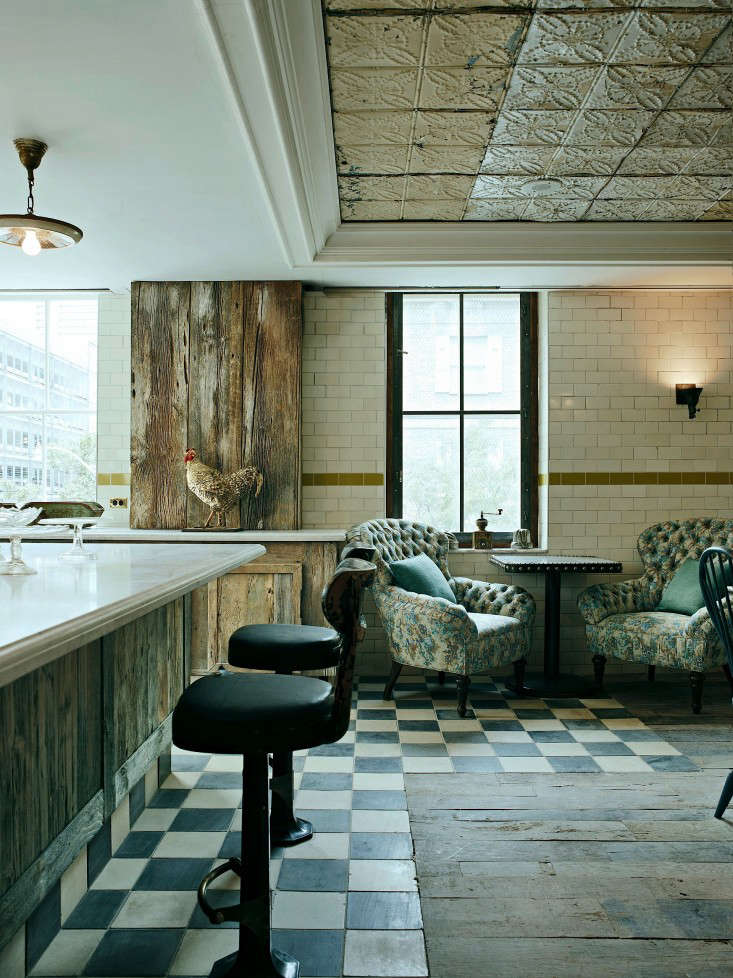 Above: The designers artfully preserved remnants of the original space: a new ceiling frames old tin tiles, and on the floor, black and white tiles meet up with the existing floorboards. See how Medium Plenty did something similar using old details in A Neo-General Store Opens in Oakland. 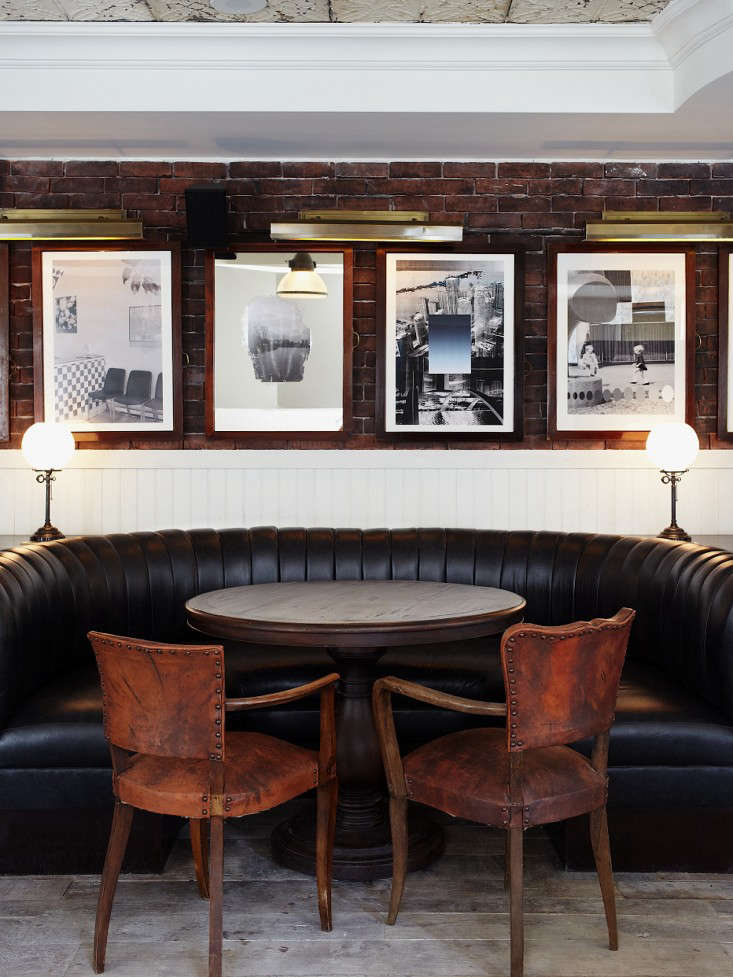 Above: The Club Restaurant has brick walls and leather-covered booths. 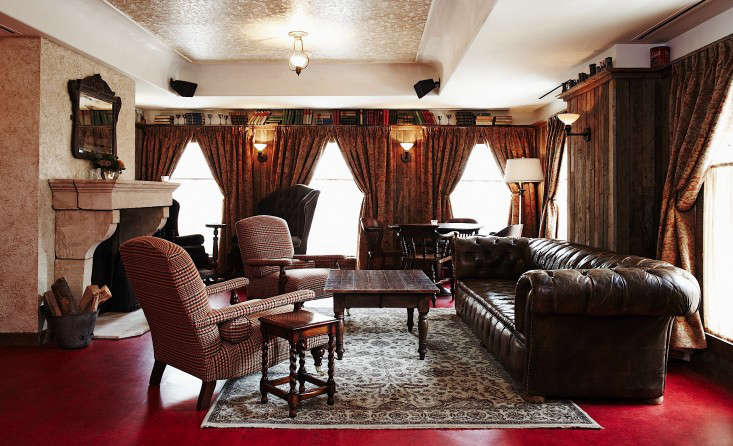 Above: The top floor hosts the Pretzel Bell Bar, which is named after the building’s original tavern. A red linoleum floor and tartan-covered side chairs tweak the traditional hunting lodge aesthetic. 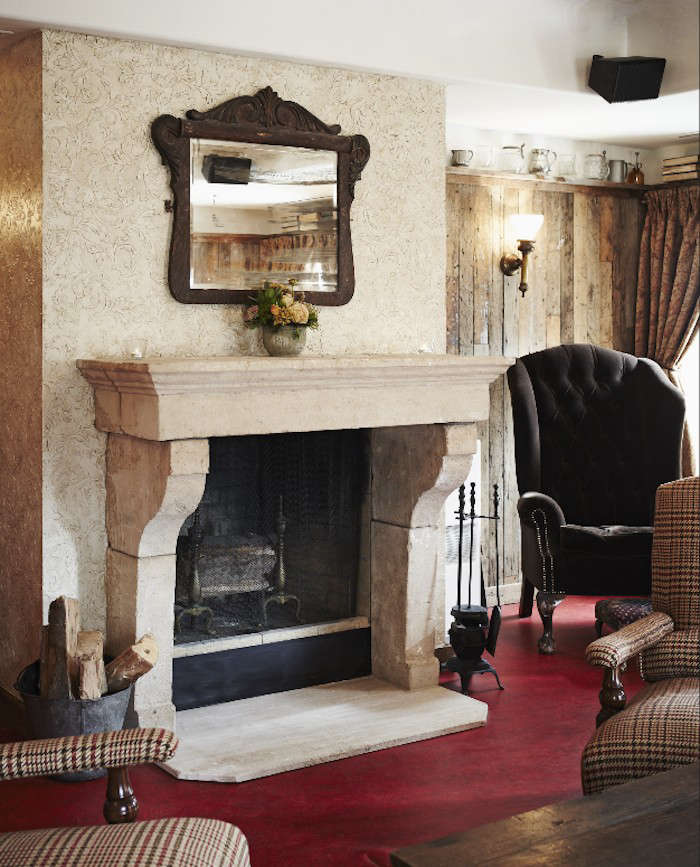 Above: A stone fireplace is paired with rustic wood paneling that ends in a shelf just before the ceiling. 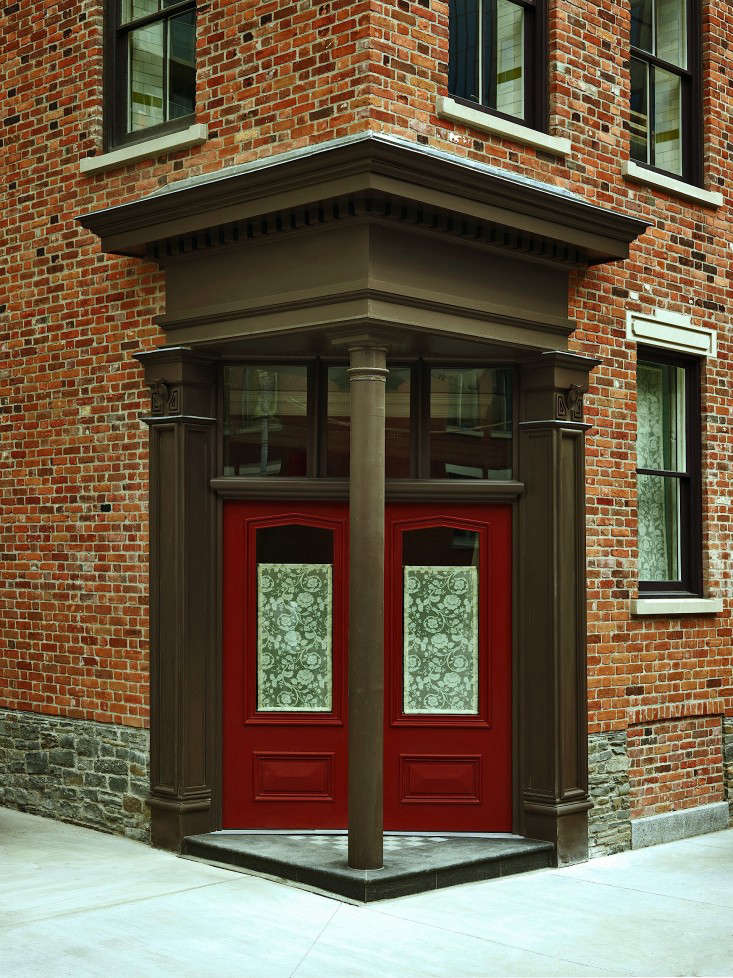 Above: Set into a corner of the mid-19th century building, the entrance to Soho House is framed by Georgian Colonial columns, pilasters, and an entablature.

Go to Velvet Revolution: Soho House Berlin to see a Soho House outpost in a Bauhaus-era Communist command center, and have a look at Steal This Look: Soho House Berlin Bath.  On Gardenista, check out the Organic Flowers on Red Damsel Farm in Victoria, BC for another Canadian experience.

Trending on Gardenista: The Secret to Year-Round Gardens