Renata Bokalo and Roman Luba were in a bit of a renter’s rut. After 15 years of leasing their one-bedroom in New York’s Meatpacking District, they had hit an impasse. Renata, who is the director of sales at Aesthetic Movement, wanted to update and finally make the place their own: “It felt like we were still living in our first post-college apartment,” she says. But Roman wasn’t convinced it was financially worth it.

“It took our couples’ therapist to mediate and help us work out a small budget that made us both happy,” they told us. Conveniently, Roman, a creative director at Adobe, happens to be very handy: Focusing on the kitchen and bath, he retiled, installed new sinks and doors, and painted—all for under $3,000. “Roman is extremely good at Googling ‘How To,'” notes Renata. Come see the results and learn the couple’s discoveries for “how to live with stuff and little space,” no counseling required. 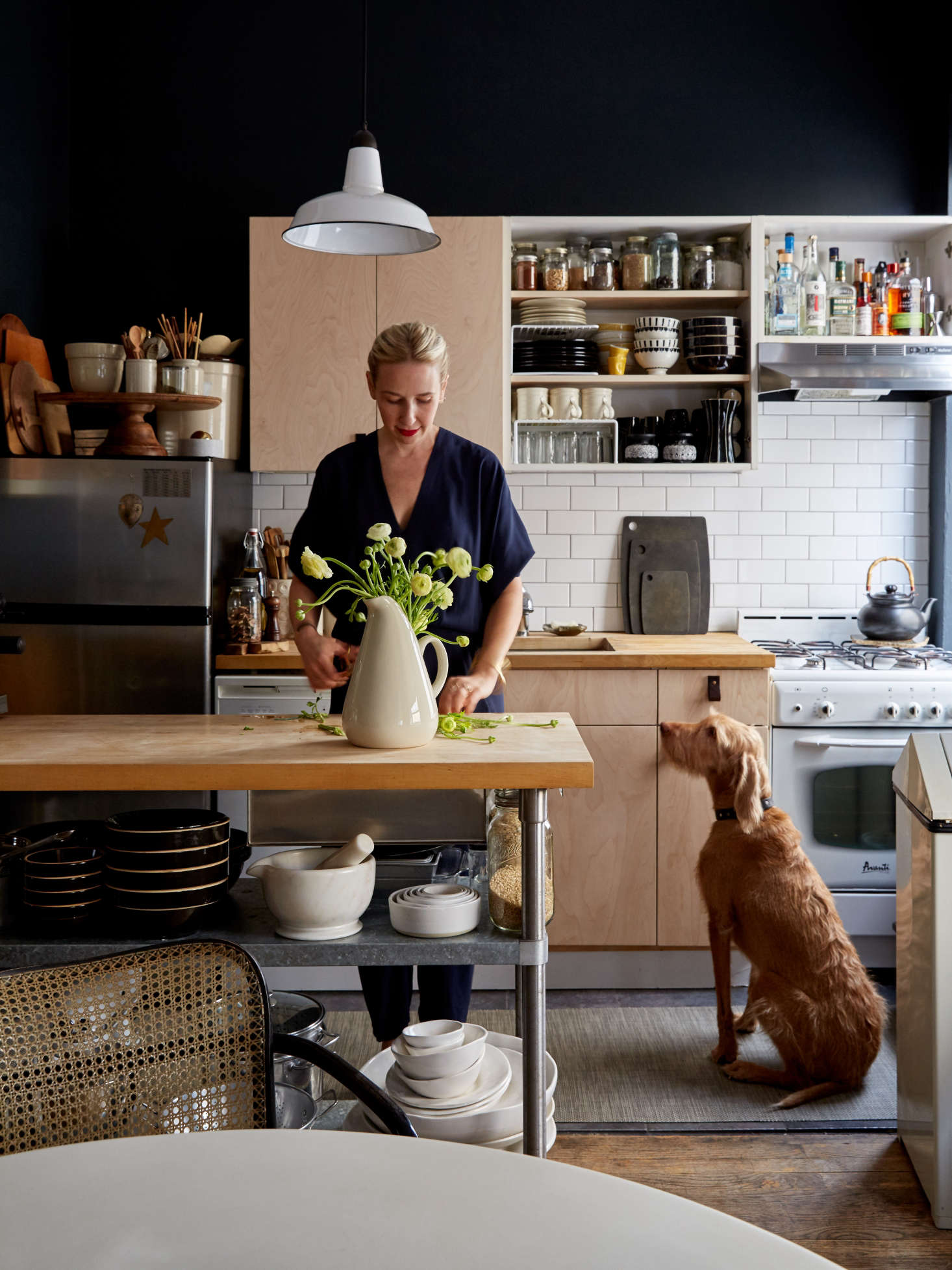 Back when the couple initially took over the 700-square-foot apartment— from a family of four—Roman removed the wall dividing the galley kitchen from the living area, redid the wood floors, and whitewashed the walls. (They initially used the space as an office-showroom for their beloved, now-shuttered housewares shop, Auto, which was on the ground floor in what had been a taxi dispatch.)

This go, Roman cost-effectively transformed the look of the kitchen by installing new cabinet doors onto the existing Home Depot cabinets and adding the subway tile backsplash. He made the DIY leather pulls from an old belt. A butcher-block counter purchased at a restaurant supply store on the Bowery serves as their prep counter. Renata is shown here with Edie (“like Sedgwick”), their wiry vizsla, whose doings are documented on Instagram at @edieshadows. 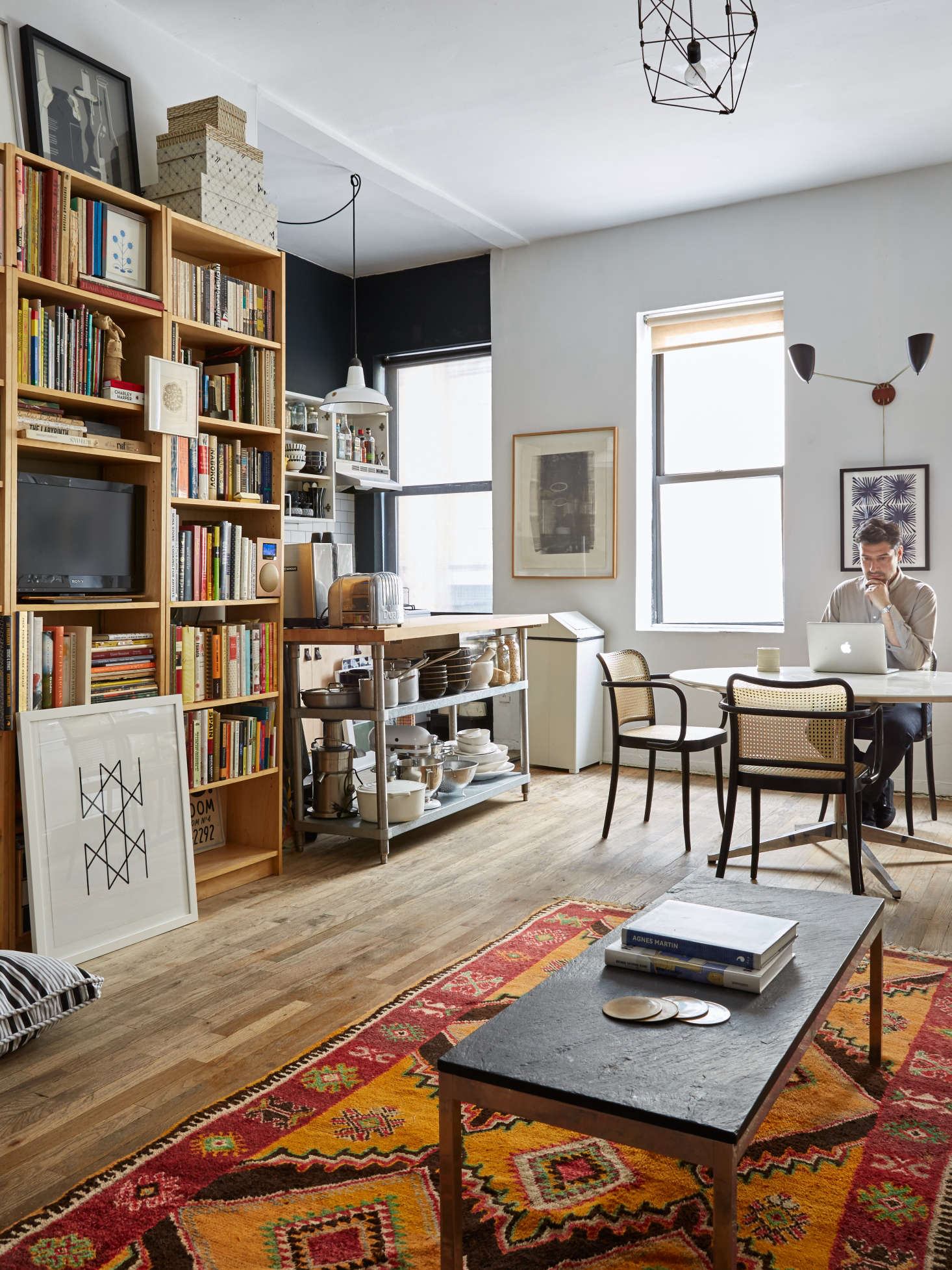 “Our living, kitchen, and dining rooms function as work, rest, and entertainment areas,” says Roman. “Because each is adaptable, the apartment never feels small. We’re also lucky to have 12-foot ceilings and windows at each end.”

The kitchen is set off by a charcoal accent wall, a souvenir from when the apartment appeared in an episode of Law & Order. “They removed everything and repainted. When it was time to put it all back, the production designer offered to paint it any color we wanted at no cost, so we went dark. Over time, we’ve painted it back to all white, except for the kitchen.” 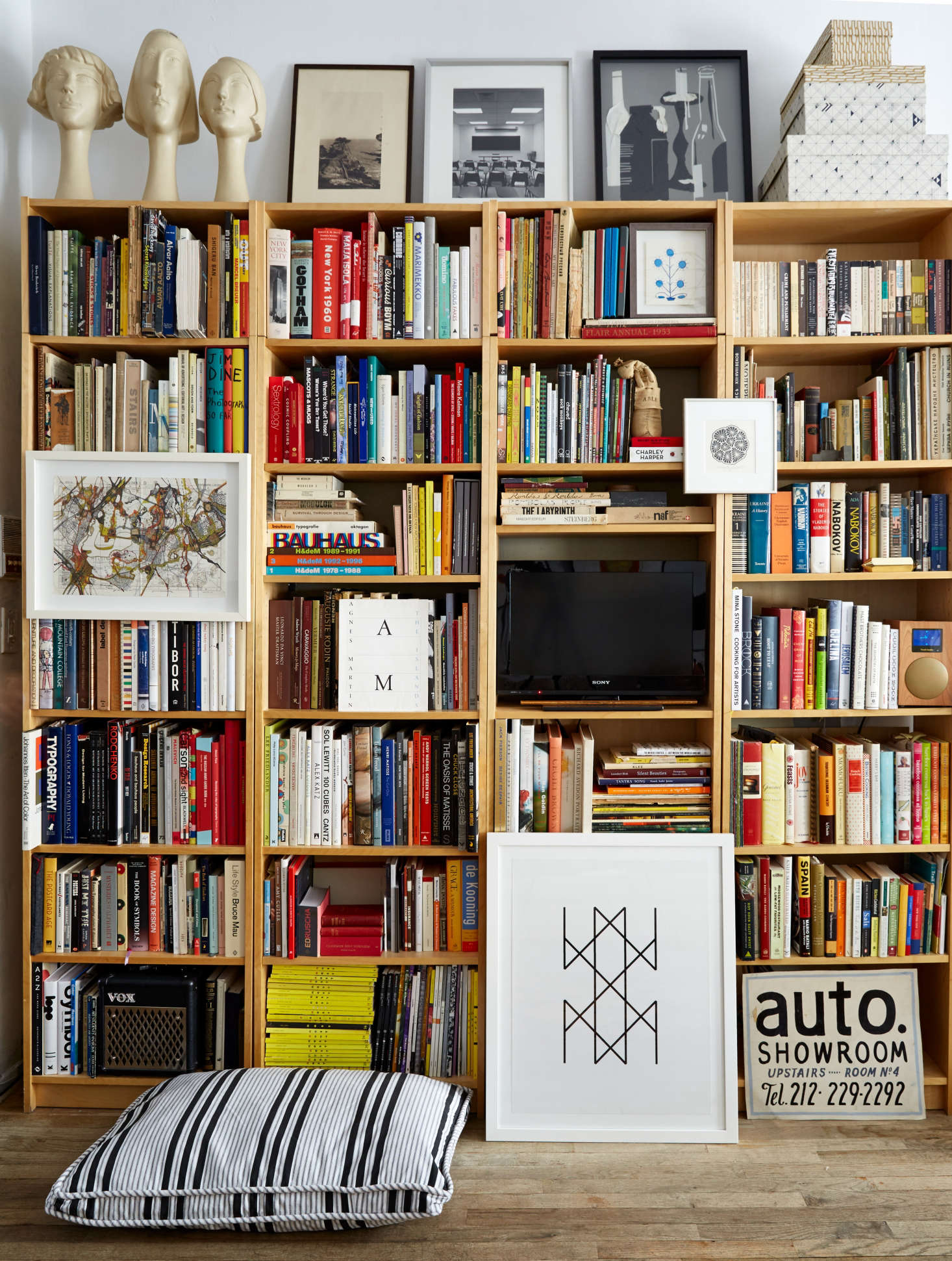 The initial set of Ikea Billy bookshelves traveled with Renata and Roman from their former Brooklyn apartment. They’ve since added several more to fill in the wall. “They’re nice because they sort of fade away and let the books take center stage,” says Renata, who adds that to keep the stacks under control, they have regular book and clothing purges. “And when we bring something new in, something old has to go.”

Backstory worth noting: Roman and Renata met when they were four and eight years old, respectively, at a Ukrainian summer camp in upstate New York (where Renata’s father was the administrator). Both are first-generation Americans and hints of their history can be spotted here and there: The bookshelves, for instance, showcase, among other things, their collection of Ukrainian children’s books and their framed wedding invitation (the ceremony took place at their summer camp). The trio of mannequin heads are Maira Kalman designs from Auto and the Striped Dog Bed is by their friend Matthew Morris’s company, Mr. Dog New York. 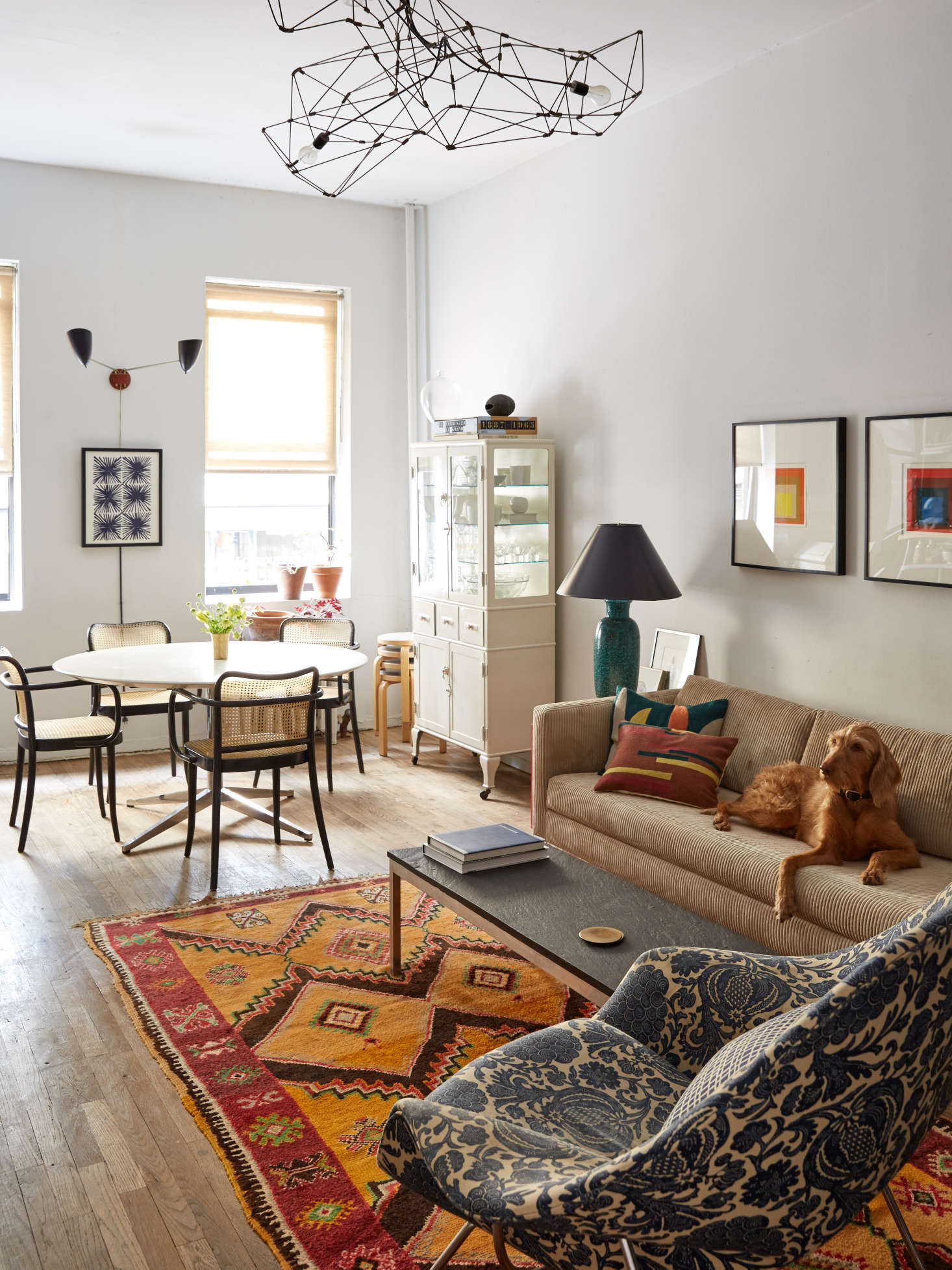 Edie mans the living room’s nine-foot sofa, a vintage piece handed down by Renata’s godmother and reupholstered in hardwearing wide-wale corduroy. Of life with a big dog in the big city, Renata says, “A great thing about vizslas is they think they’re small dogs. They need exercise—they were the king’s hunting dogs in Hungary—but they’re as at home on the sofa as they are in the woods.” 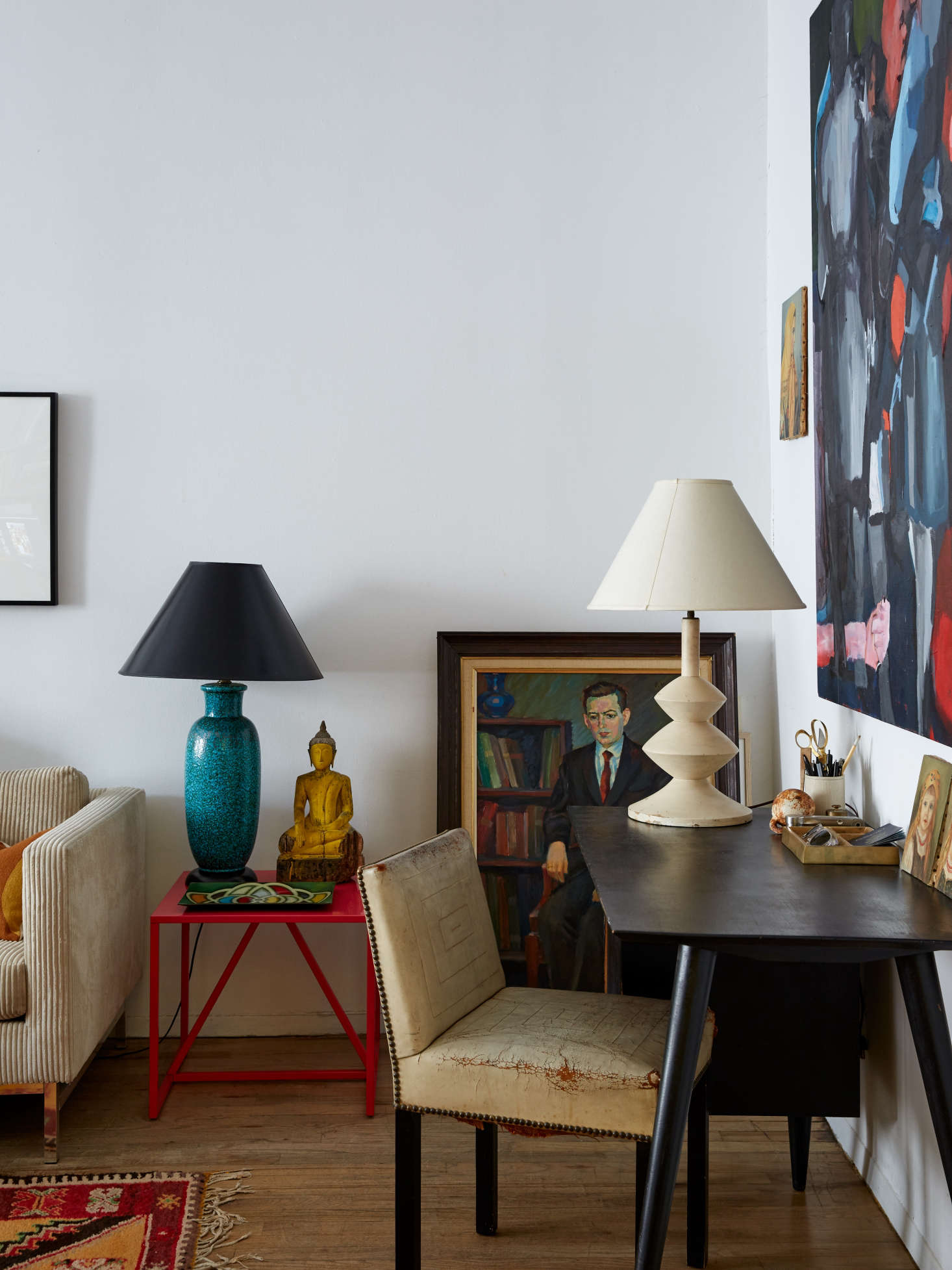 The apartment is filled with prints, canvases, and sculptural lamps that give it vitality. Much of the artwork is by Roman, who studied architecture at University of Pennsylvania and comes from a creative family: The portrait shown here is of his father and was painted by his grandfather. The couple rescued the living room’s Paul McCobb desk from a curb in Philadelphia and painted it matte black. The plaster lamp is a reproduction Diego Giacometti design for Jean-Michel Frank. 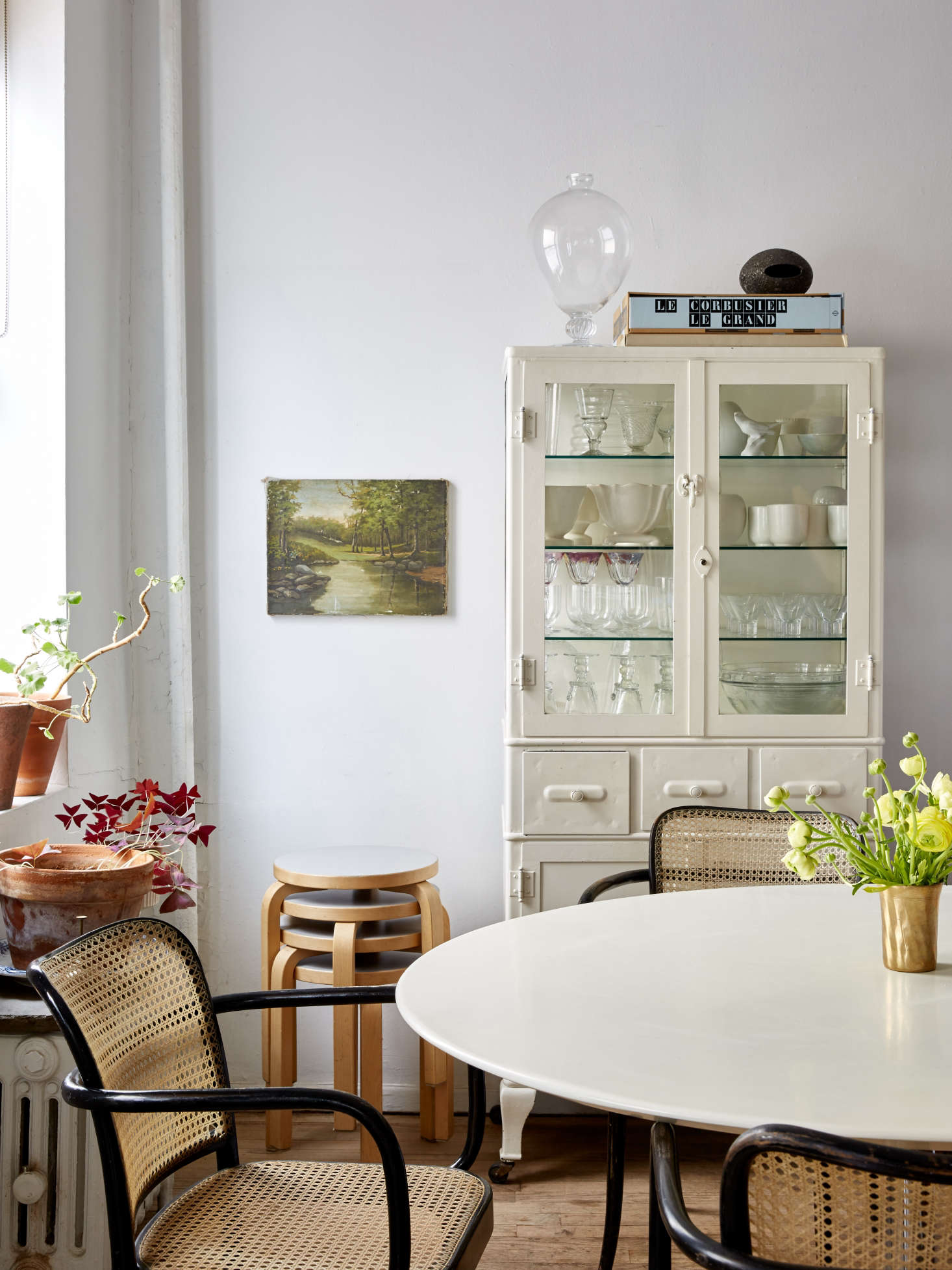 6. Display things that look good together (and hide the rest).

Newly powder-coated white, a medical cabinet salvaged from their old camp infirmary serves as the dining sideboard. For a tidy look, Renata and Roman display only clear glassware and white pottery (they keep their Scrabble board and other games in the lower cabinet and use one of the drawers as their tool kit).

The round Florence Knoll dining table is a perfect companion piece thanks to its white top, and also allows for flexible seating: When they’re having more than four to dinner, they supplement the caned bentwood chairs with Alvar Aalto stools that stack in a corner. 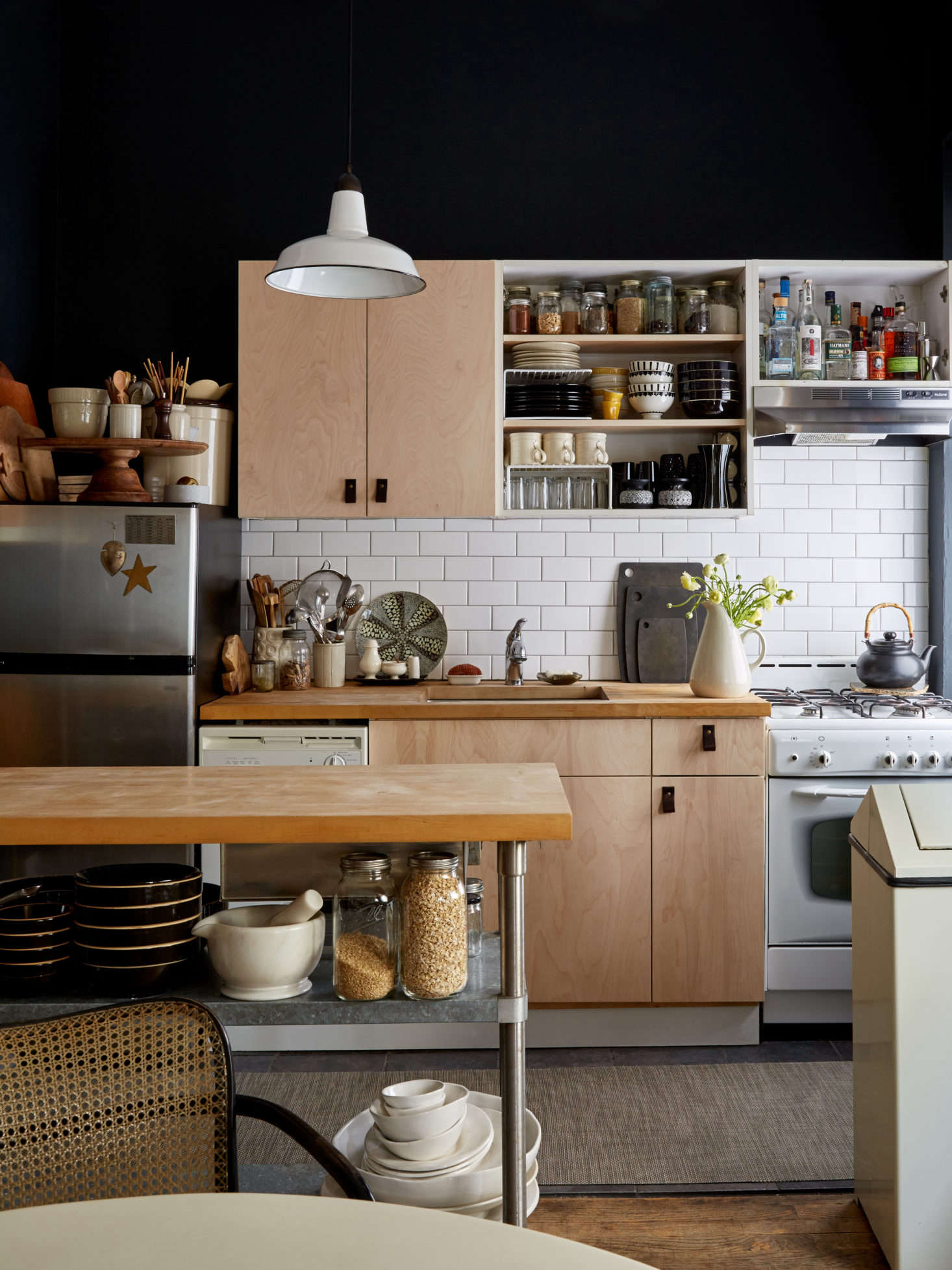 The couple use just about every inch of horizontal kitchen space for storage, including the top of their compact fridge: “The wooden cake stand is a space-saving storage trick: It creates levels.” Grains are stored in Mason jars, and Edie’s food is kept in a large, covered earthenware crock pot. 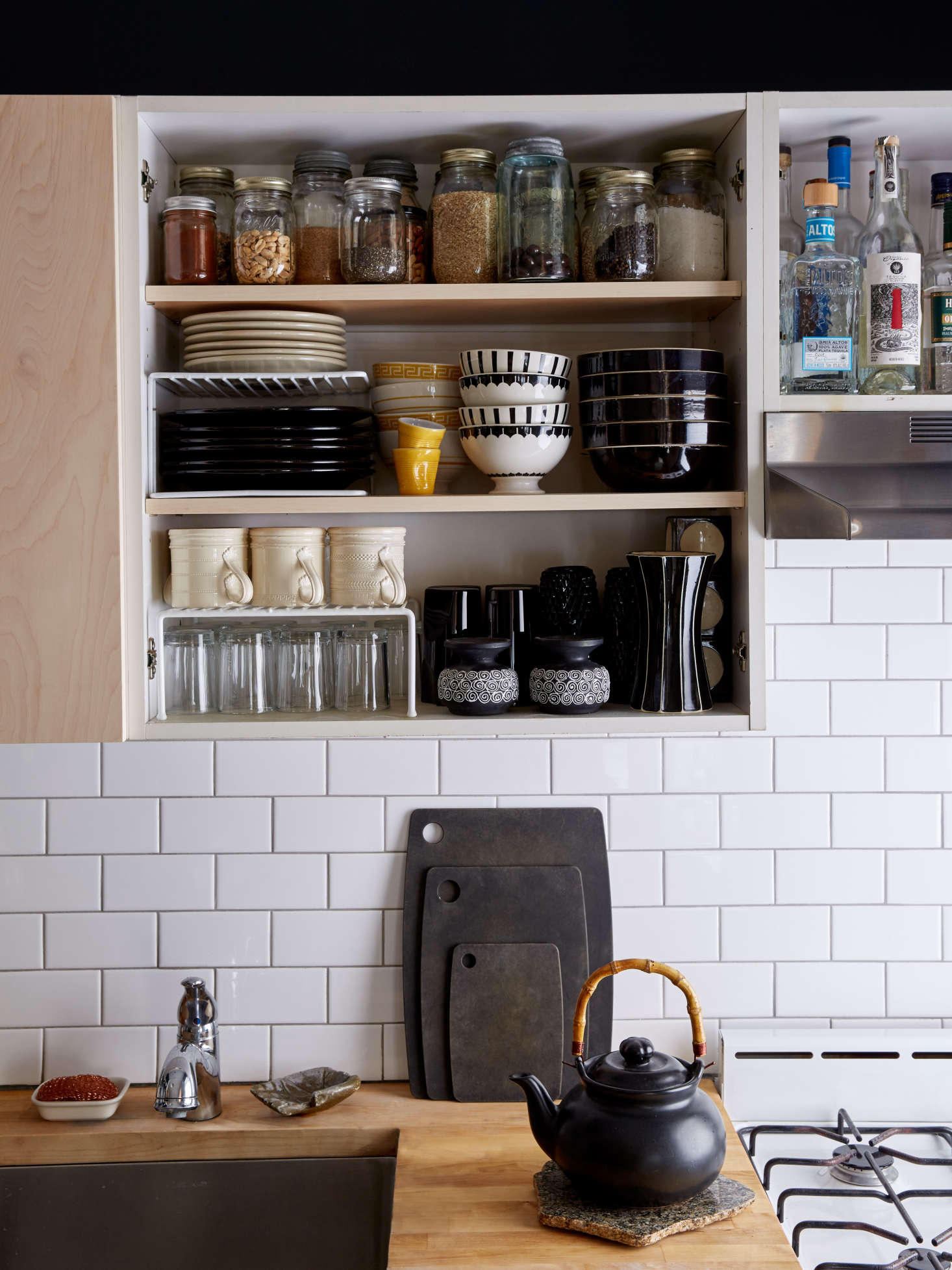 Renata and Roman pack a lot of tableware into their open shelves thanks to Container Store metal Dish Risers. Note that they use a variety of dinnerware, but each category is a matched set. The café au lait bowls are a signature item from Aesthetic Movement’s Sir-Madam collection: See Now Serving: Perfected Tableware from the Past. 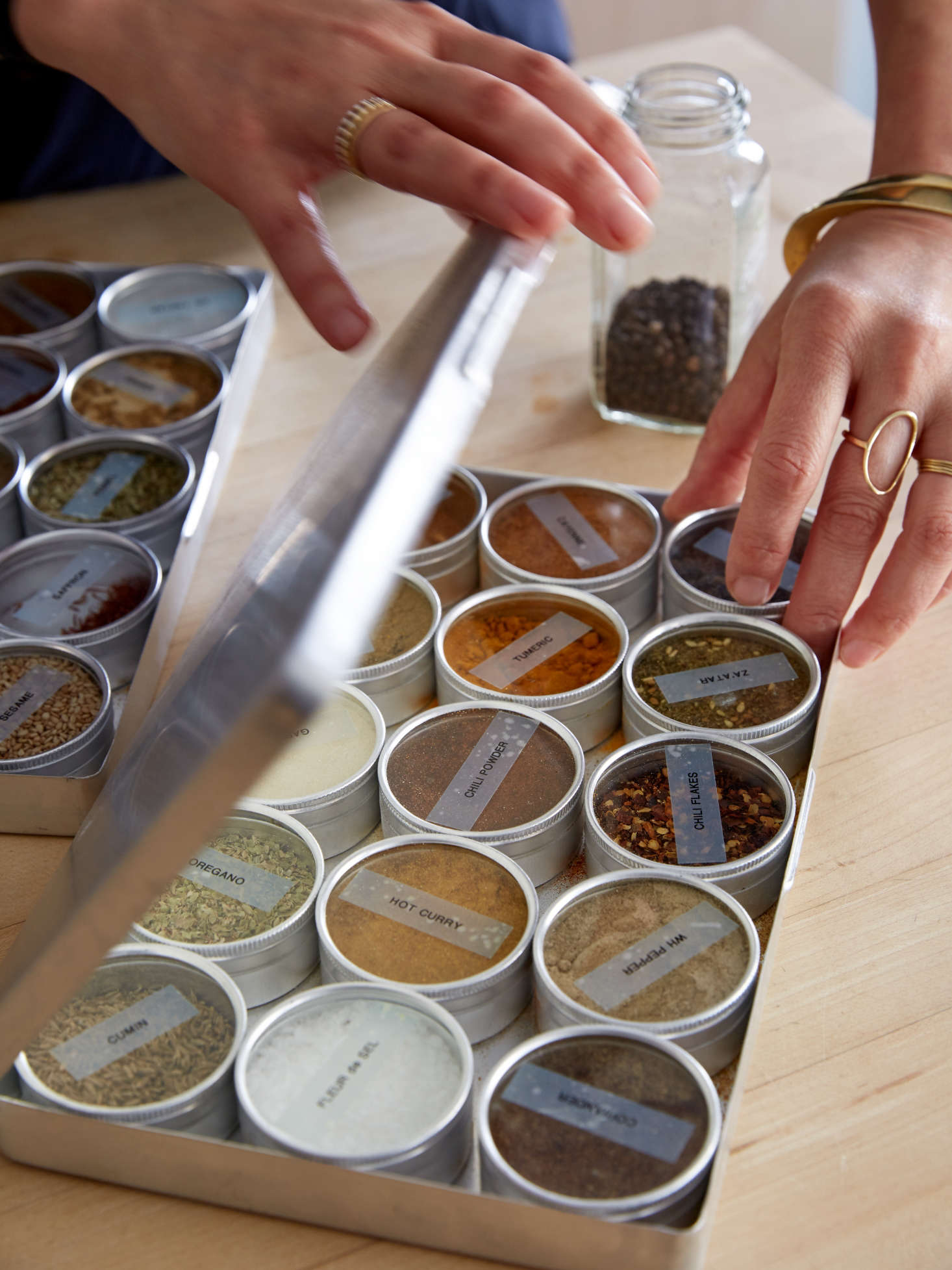 9. Create your own systems.

The couple are avid cooks. To save valuable cabinet space, they keep their spices consolidated in glass-topped watchmaker’s tins: $13.80 for a set of 15 in an aluminum box from Lee Valley Tools. (Kitchen overflow, including larger spice containers and infrequently used appliances, is kept in the bedroom’s storage loft.) 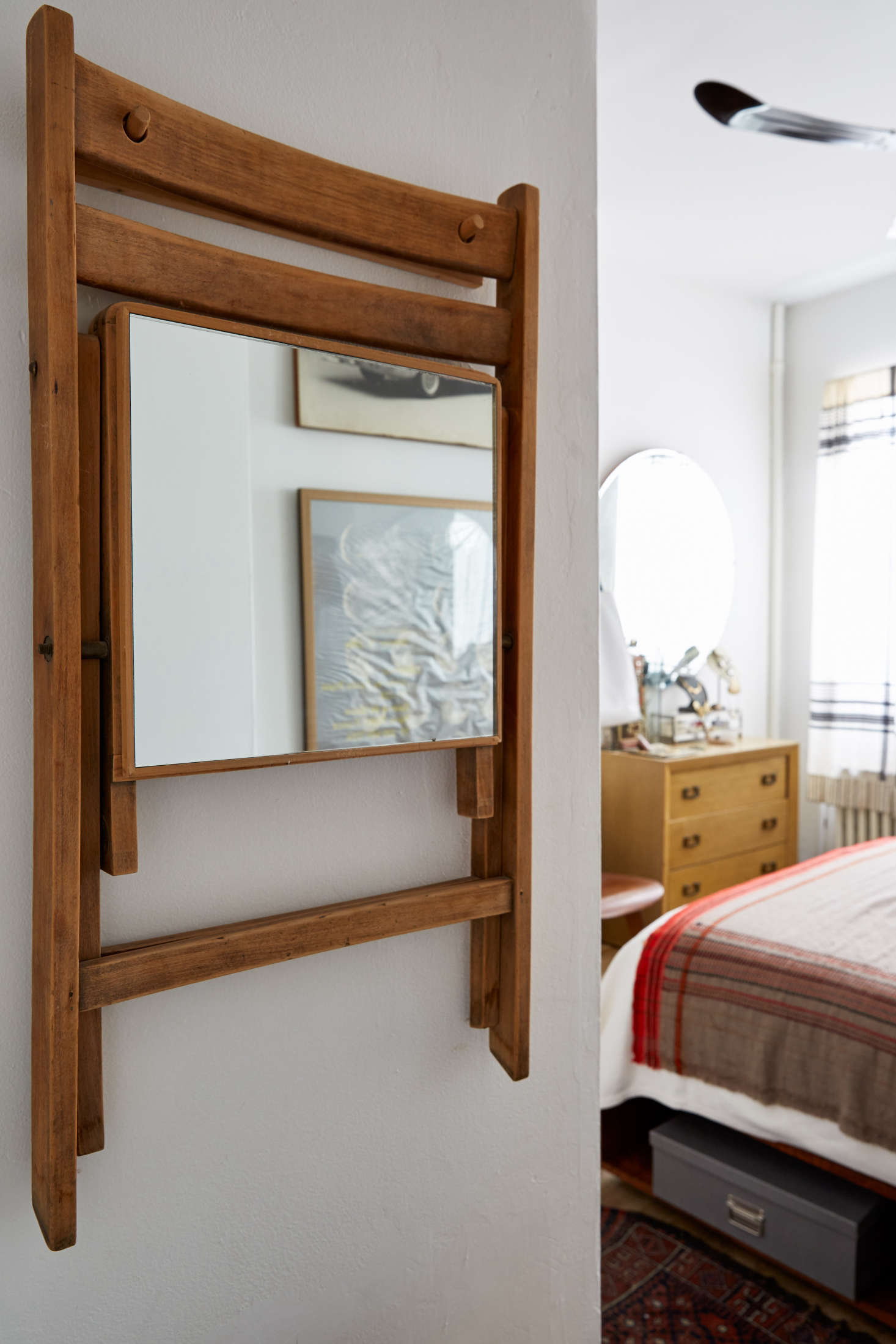 A folding chair by furniture appropriator Michael Whitney is displayed outside the bedroom, where it serves as a mirror (and extra folding chair). 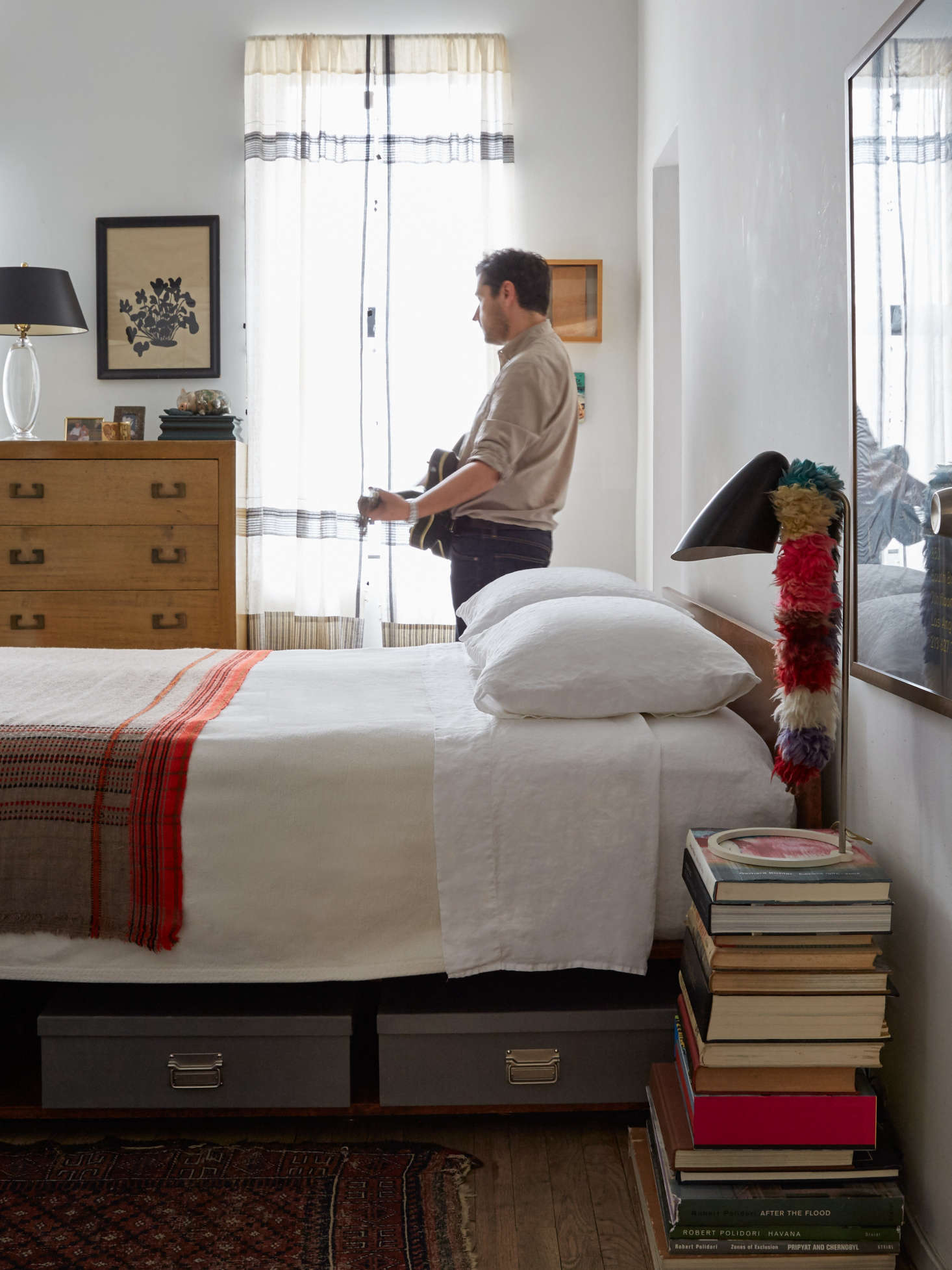 11. Use the space under the bed as storage.

To make every inch count, the couple’s queen-size platform bed has exposed storage underneath that they stock with archival boxes from the Container Store. And as a side table, they use a tall stack of books. 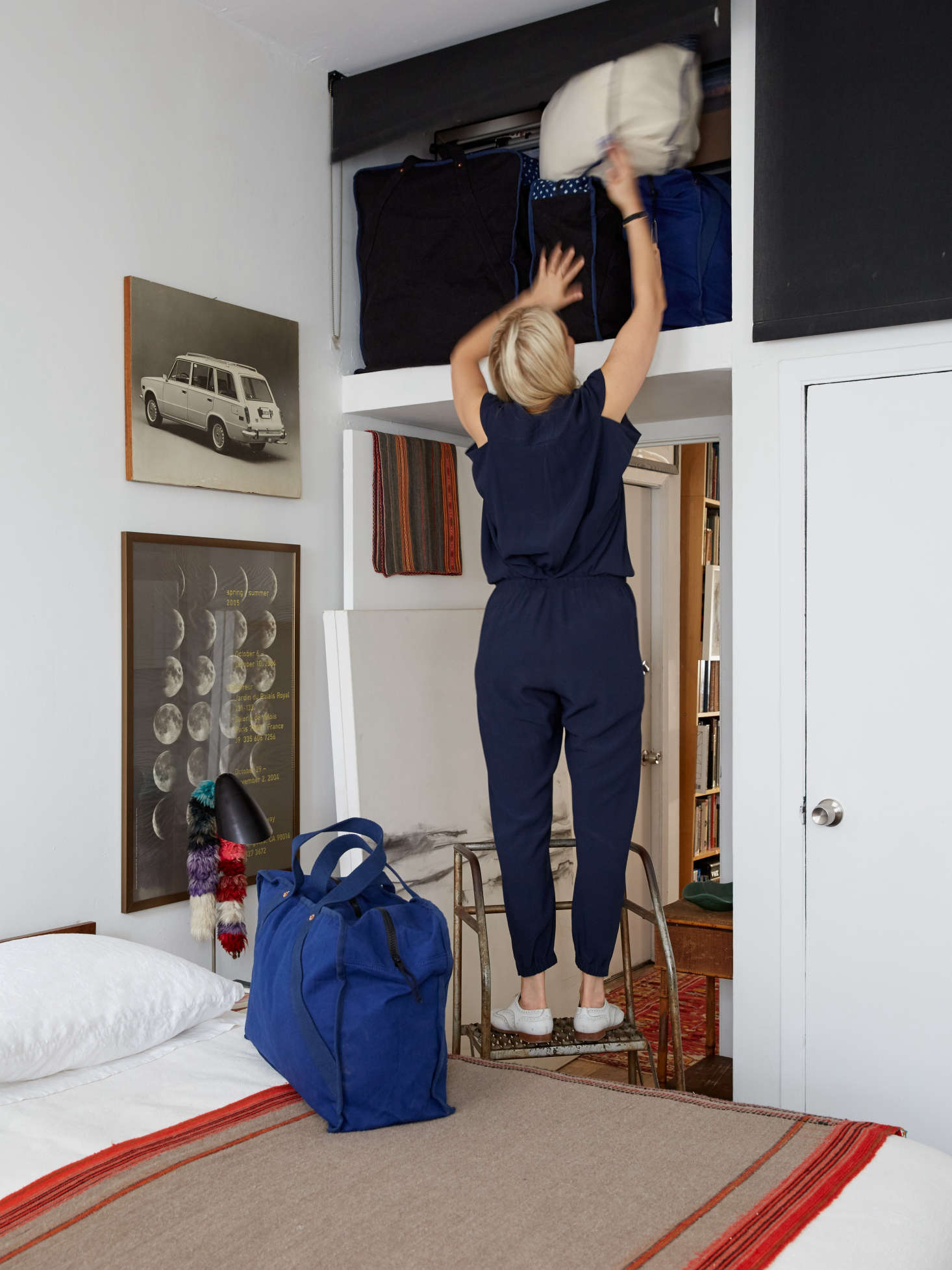 12. Carve out space over the closet as storage

The key to keeping overflow in check is having a dumping ground. One of the apartment’s greatest features is its three-foot-high, 12-foot-wide loft that the couple concealed with blackout roller shades from the Shade Store. Renata organizes it with a collection of Immodest Cotton Storage Bags from Flea Bags, a line that Aesthetic Movement represents. The bags come with labeling tags and hold out-of-season bedding and clothes; things like shoes and kitchen supplies go in plastic bins. 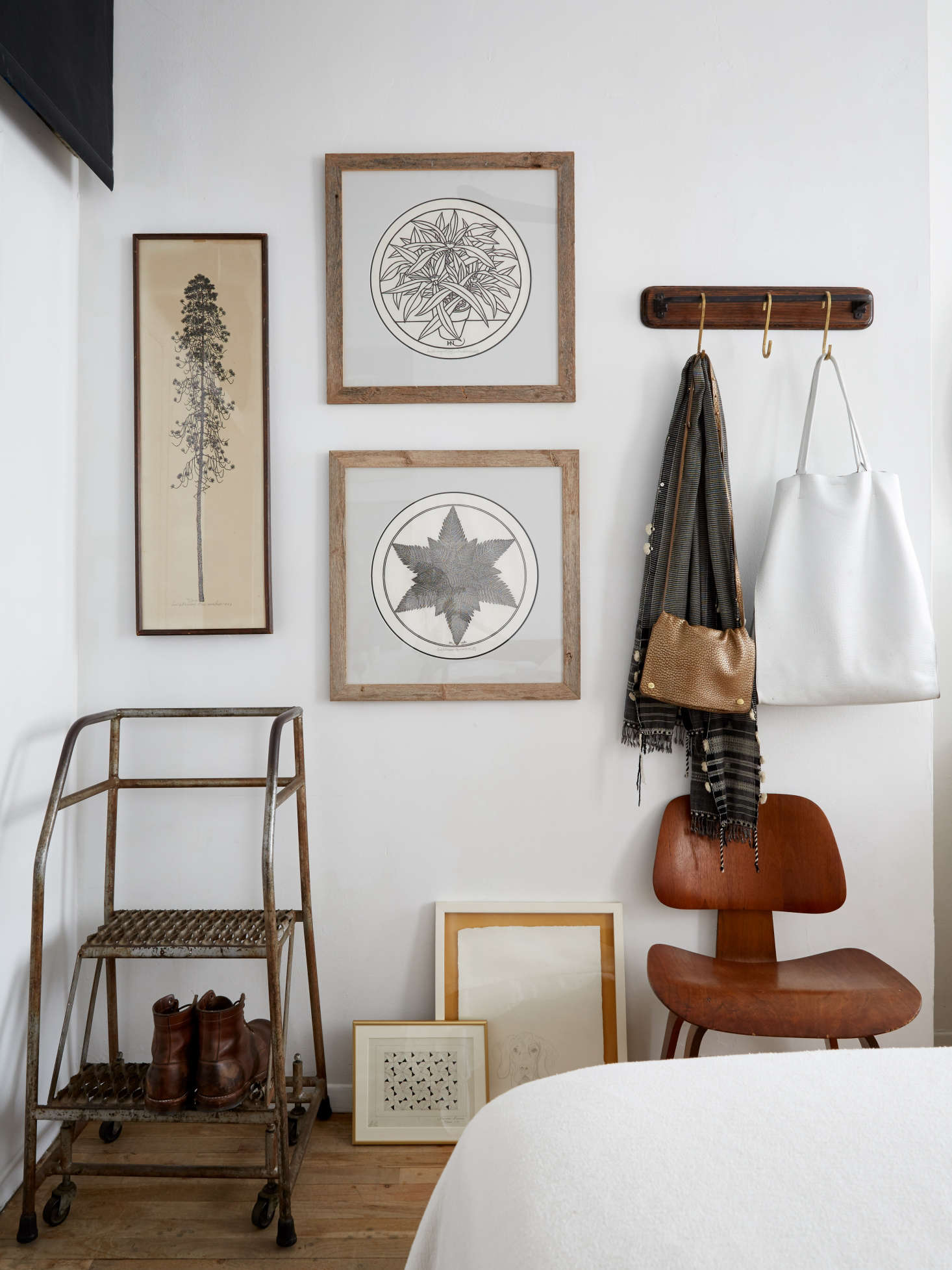 13. Access hard-to-reach places with a step ladder on wheels

Above: An industrial step ladder is kept out of the way in a corner—and can be wheeled into the living area to access bookshelf heights. The circular woodcut prints are by Jacques Hnizdovsky. 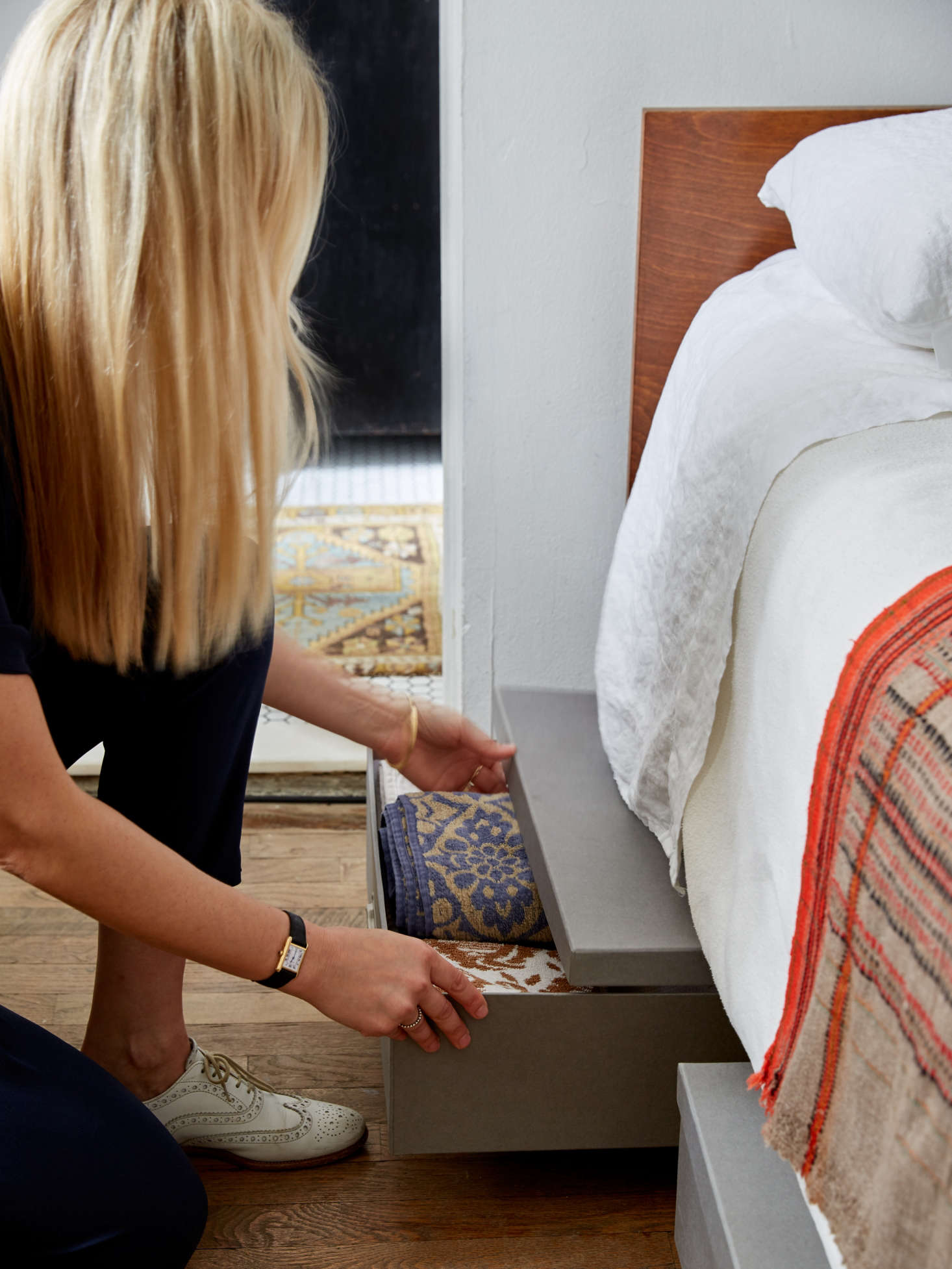 14. Create a linen closet in a box

Above: Everyday towels, sheets, and blankets are kept in the under-the-bed storage. 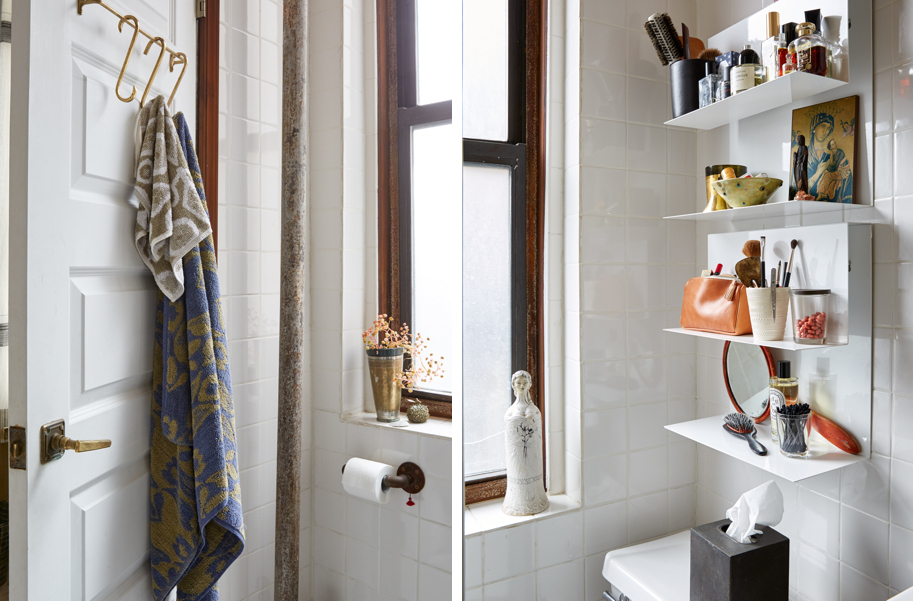 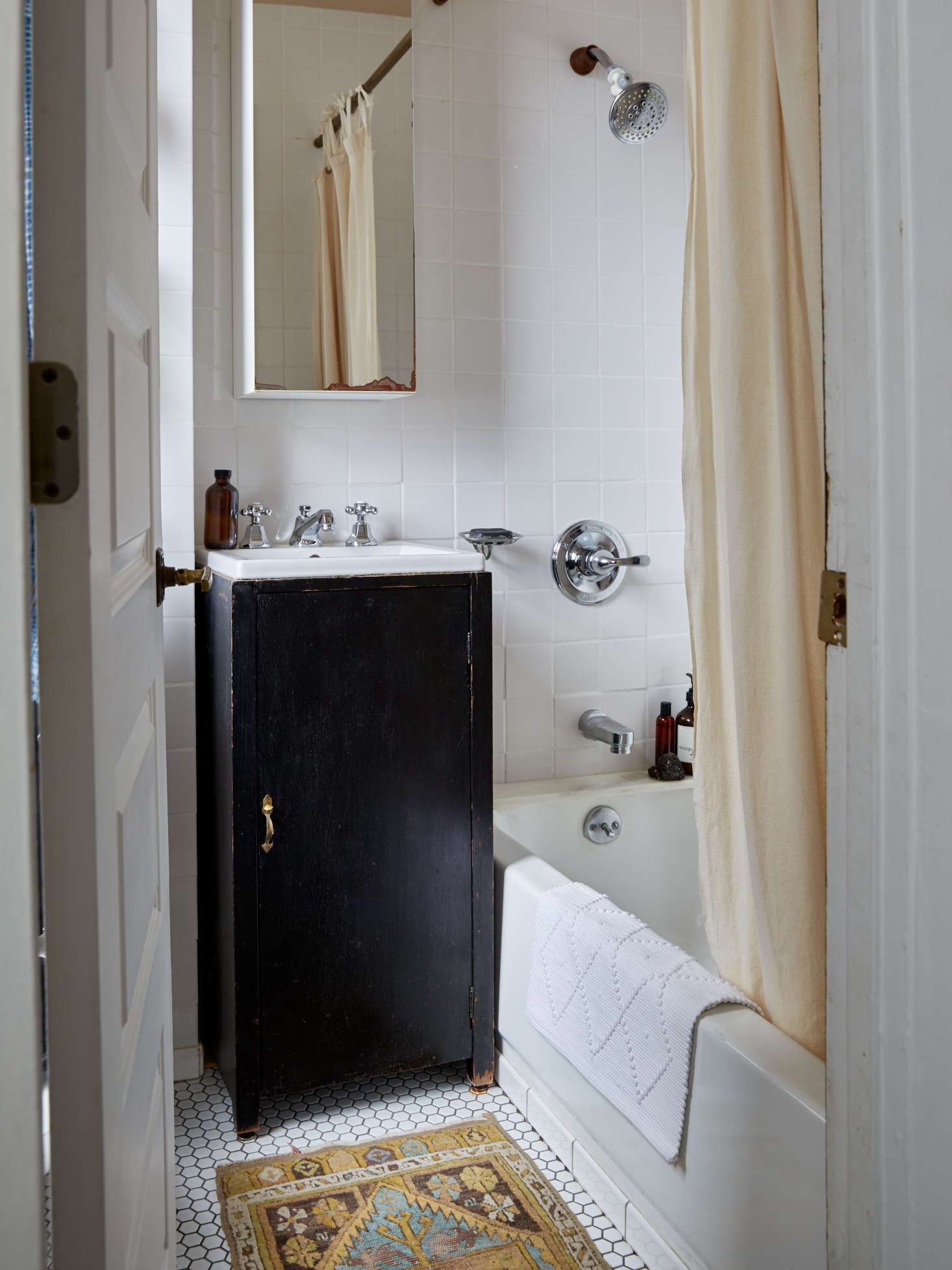 To make the approximately six-by-six-foot bathroom feel much bigger, Renata and Roman stuck to a simple palette of black and white, plus a tiny prayer rug from Afghanistan. The sink and cabinet are an inspired new addition. “We spent a lot of time looking for an interesting solution that fit our very specific, tiny dimensions,” says Renata. In a Williamsburg vintage store, they found a wood record player cabinet that fit perfectly; to make it work as a sink console, Roman tracked down an appropriately sized sink online and retrofitted the plumbing. “So, in addition to the exposed shelves, we now have storage under the sink for things we want hidden.” 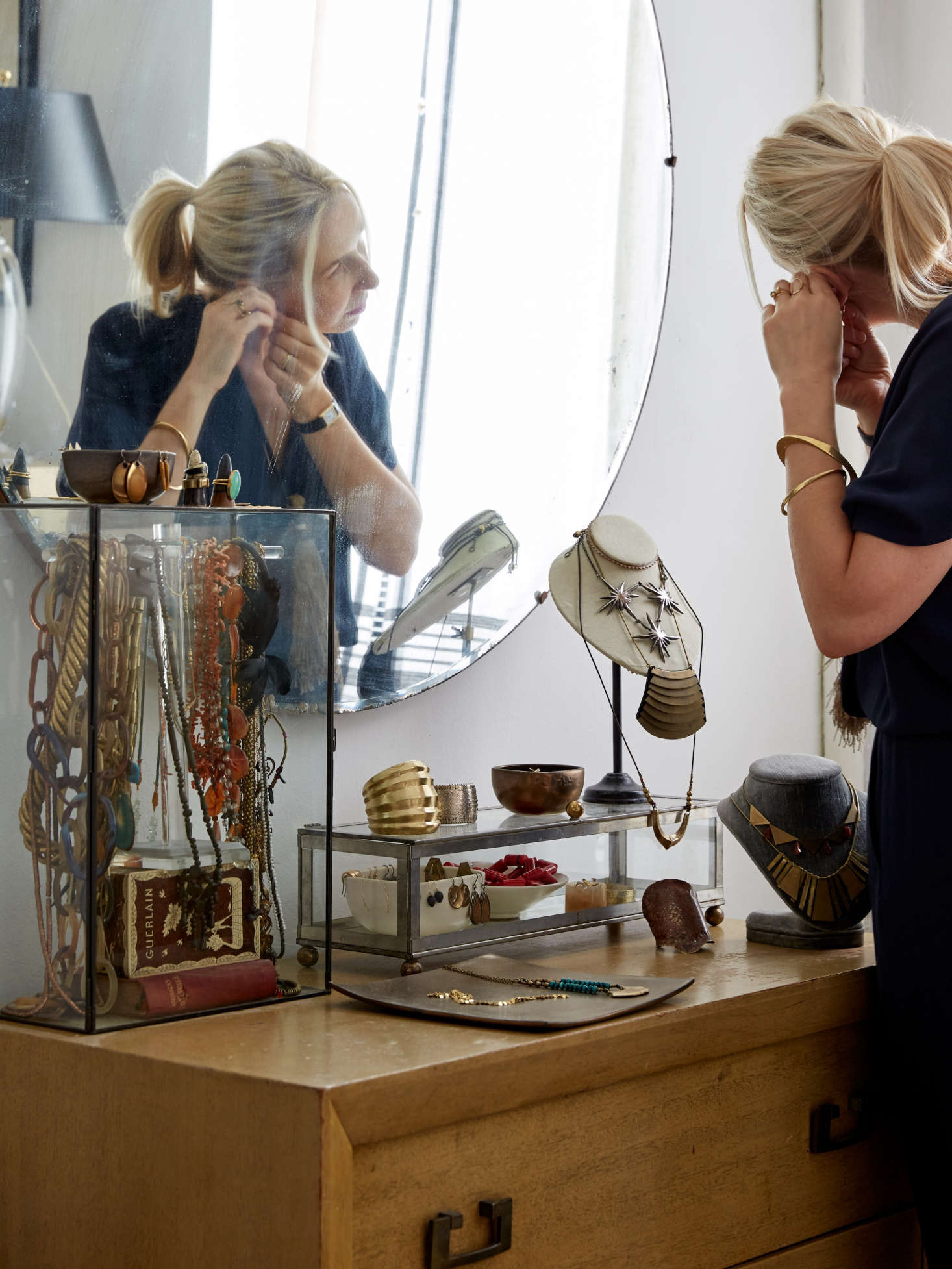 Ever the shopkeeper, Renata uses glass vitrines and display forms to keep her extensive jewelry collection dust free and on view. “Otherwise I would forget what I have and would never wear it.” She recommends Rio Grande for neck forms and earring T-stands, Michele Varian for Ceramic Ring Holders, and Meus Shop for ceramic Ring Cones.

Renata isn’t the only one at Aesthetic Movement whose living quarters have caught our eye. Take a look at:

For more small-space solutions (and to see how a family of five lives in a 665-square-foot cabin), go to Carmella’s 7-Step Plan to Clutter-Free Living.

Kitchen of the Week: A Clever Kitchen Built from Affordable and Recycled Materials

Swipe right for a tour: the home of Danish couple