Sir/Madam, Aesthetic Movement’s new collection of tableware is inspired by kitchens past–a taste of the Gallic breakfast table here and the British nursery there. Discovery: A stack of striped cafe au lait bowls can evoke more French fantasies than A Year in Provence.

“We set out to make some useful objects that tap into fond memories as they help create new ones,” write Aesthetic Movement’s directors, Jesse James and Kostas “Gus” Anagnopoulos, in the company’s old-fashioned bound catalogue. The two add that they hope their wares conjure “a favorite meal, a market you discovered on holiday, a trip to the sea, or…your grandmother.”

This first collection is, in fact, a salute to Jesse’s grandmother, Florence James, who lived to 97, and whose 250-year-old Westport, Connecticut, farmhouse (and its many pantries and cupboards) were his longstanding touchstones. Remodelista is the first to present a sampling of the line in advance of its in-store launch this fall/winter season. For details, see Sir/Madam. Note that all prices listed below are approximate. 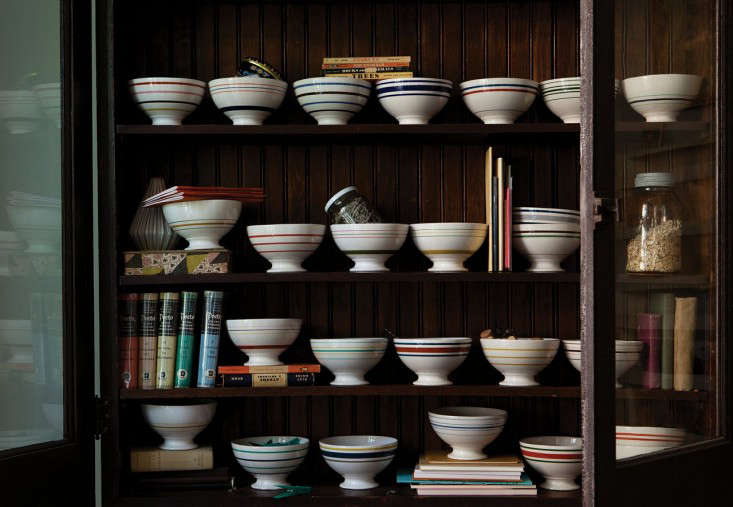 Above: Sir/Madam’s Vintage Stripe Au Lait Bowls are modeled after designs from France and Belgium that Jesse and Gus fell in love with by the stackful in a Dutch antiques store. Not only soulful but sturdy, Sir/Madam’s are microwave and dishwasher safe, as are all of the line’s tableware. 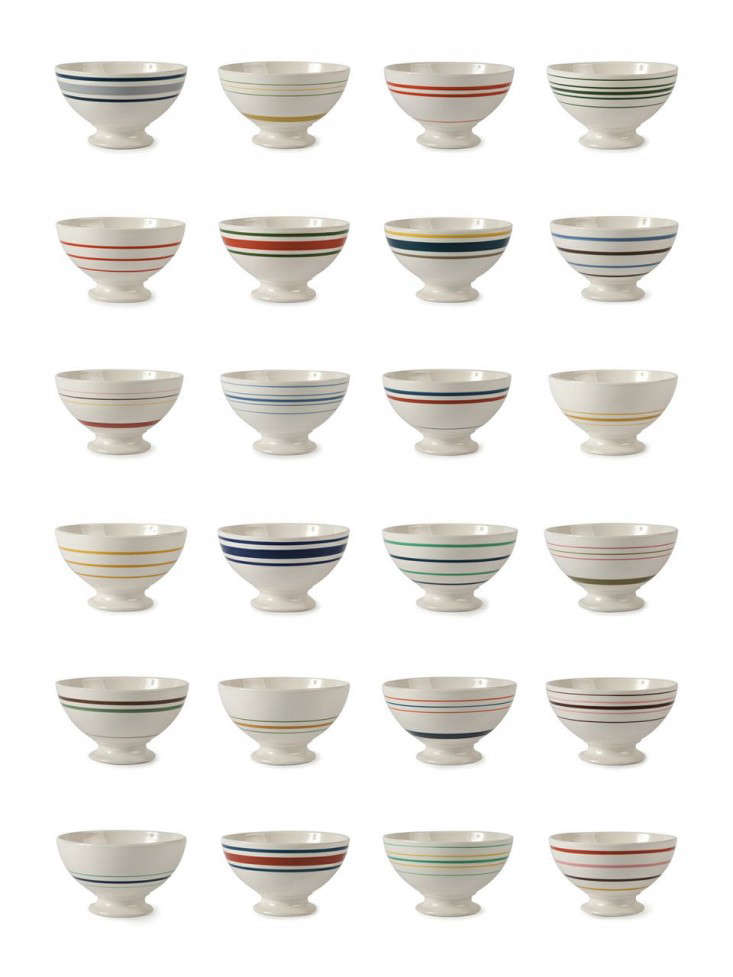 Above: The collection comes in two dozen hand-painted patterns. Mismatching is encouraged (but for those inclined towards symmetry, four single-colored stripes will be sold in multiples). Bowls are priced in the vicinity of $18 each. 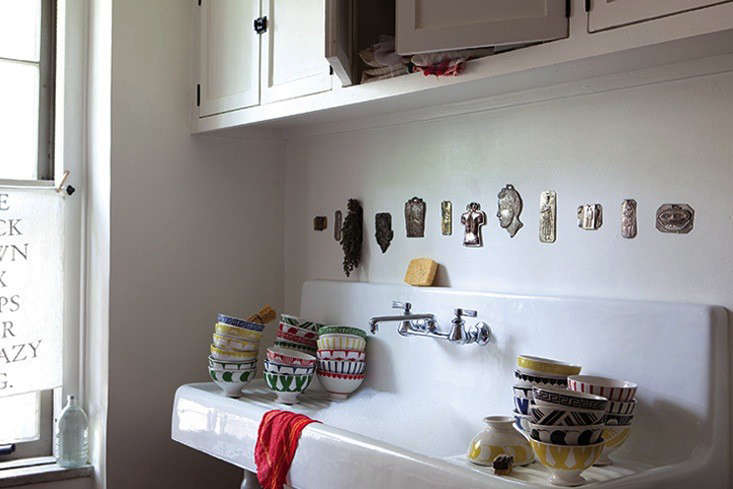 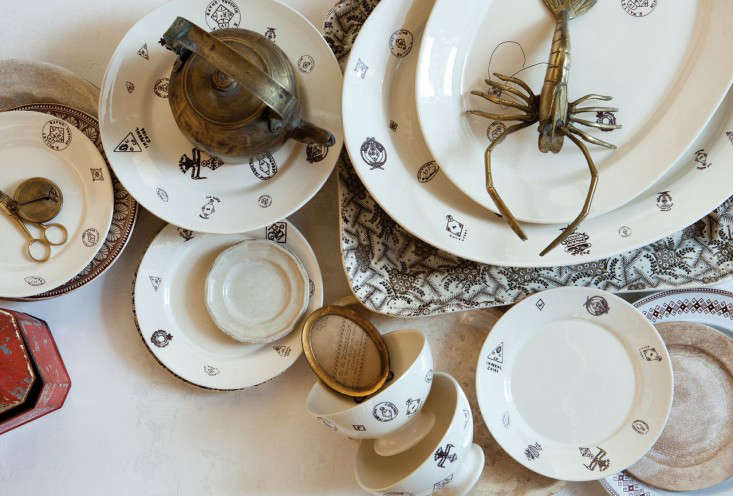 Above: Who hasn’t turned over a piece of old English china and admired the elaborate insignia on the bottom? The Makers’ Marks collection of dinnerware brings these logos to light. 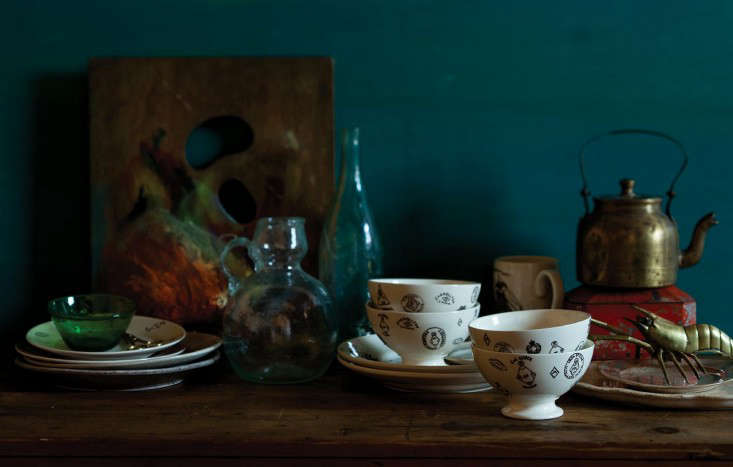 Above: Maker’s Marks is available as dinner plates, side plates, footed bowls, and platters, as well as similarly patterned linen napkins (not shown).  A set of four dinner plates is $110, four side plates $90, and four bowls $72. 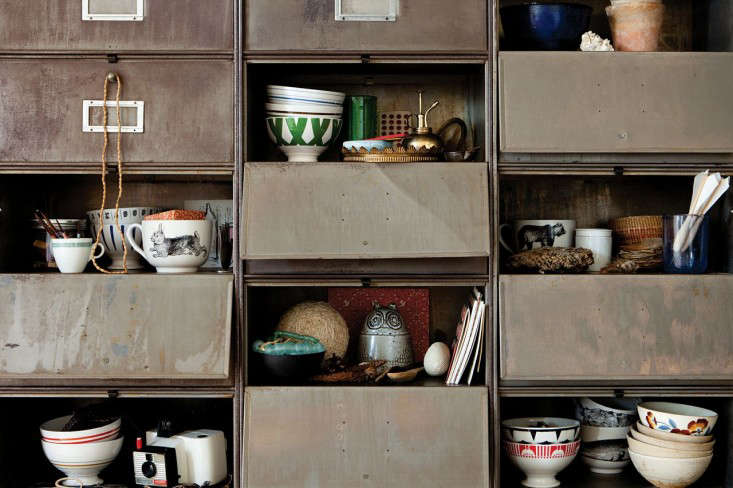 Above: Sir/Madam’s wares are intended to be put to regular use, and to be mingled with the rest of your daily scenery. 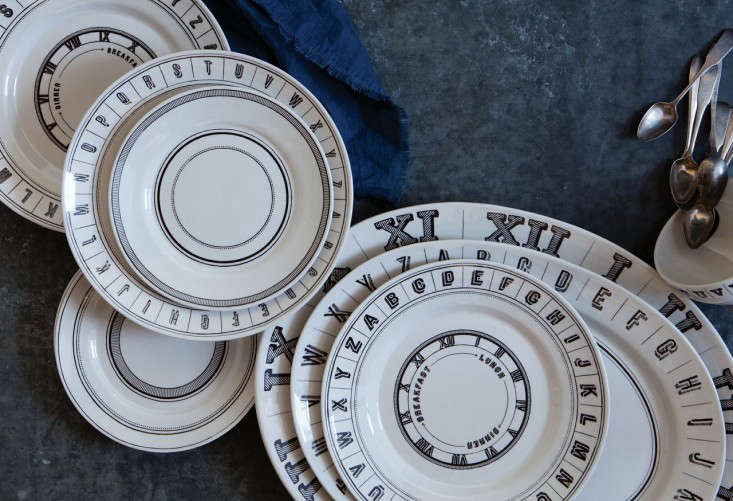 Above: The Revival dinner service is inspired by British nursery china once presented as rewards of merit. Dinner plates, side plates, and footed bowls are each sold in sets of four, all of which have patterns that are subtle variations on a theme. Prices are the same as those for Makers Marks above. Platters sell for $85 and $95. 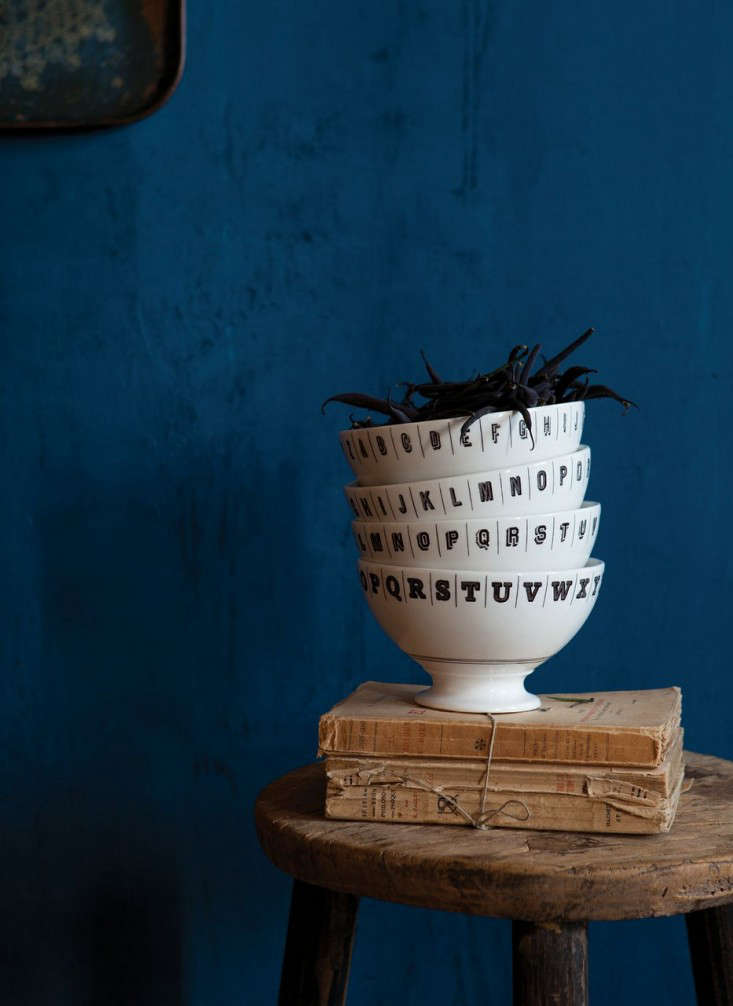 Above: A set of Revival cafe au lait bowls, $72–as with the other pieces in the service, each has a slightly different pattern.

Above: A Revival 8-inch side plate. 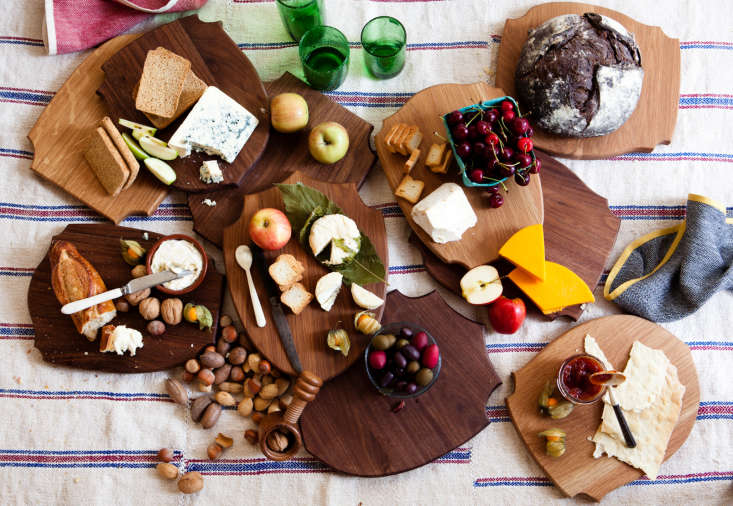 Above: Shield-shaped wooden boards are made in the U.S. from repurposed North American white oak or black walnut. The large size measures 18.5 inches by 22.5 inches. The smaller version, shown here, is 10 inches by 11.25 inches, and works well for presenting a party spread or as a lunch plate alternative. 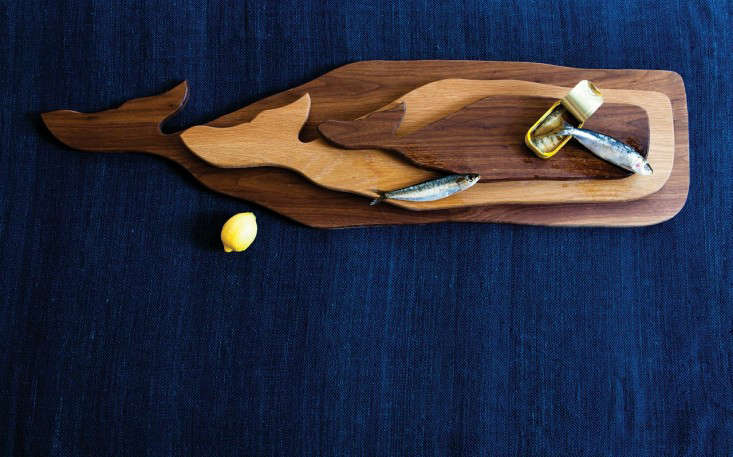 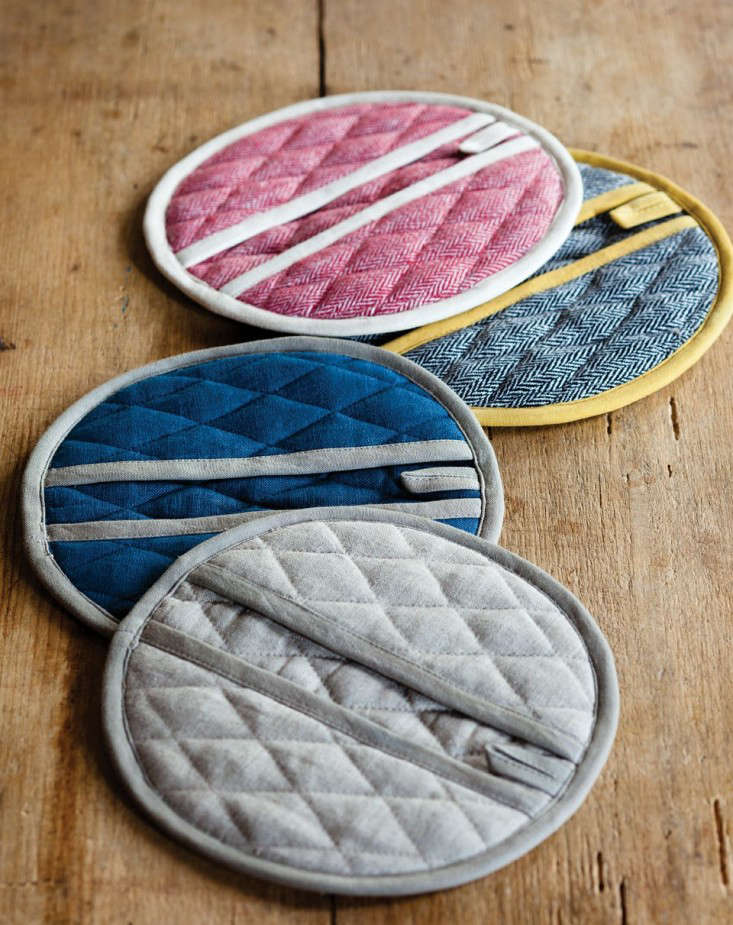 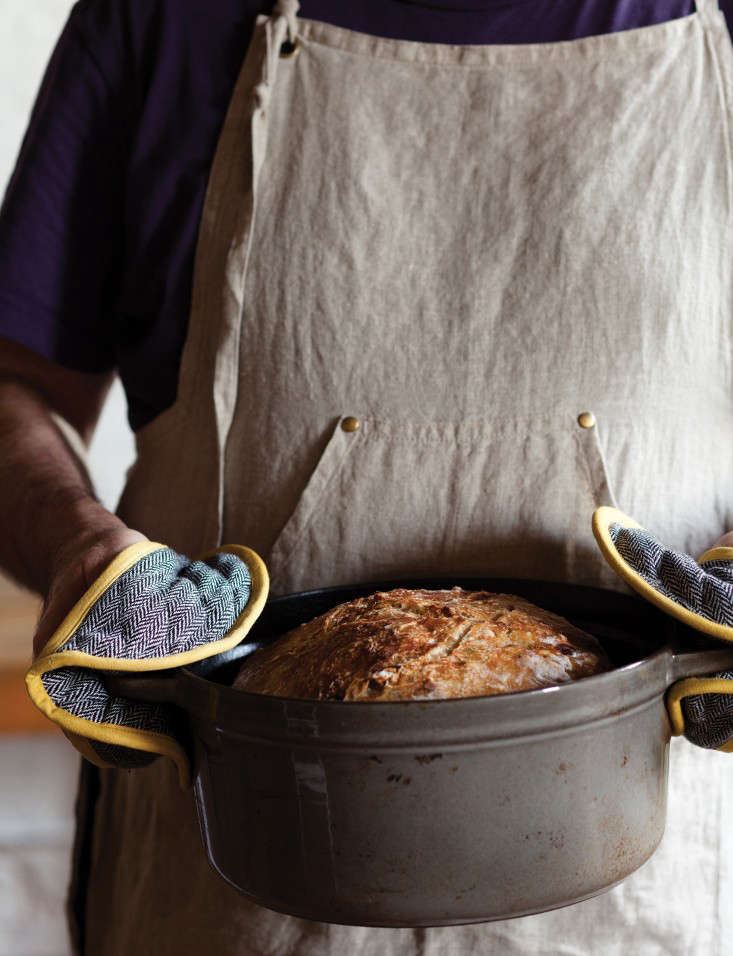 Above: Sir/Madam’s pocketed Kitchen Mitts, $20, are a clever combination of oven glove and potholder. They come in solid linen and herringbone-patterned linen-cotton (a 70-percent linen, 30-percent cotton mix) and double as impromptu trivets. 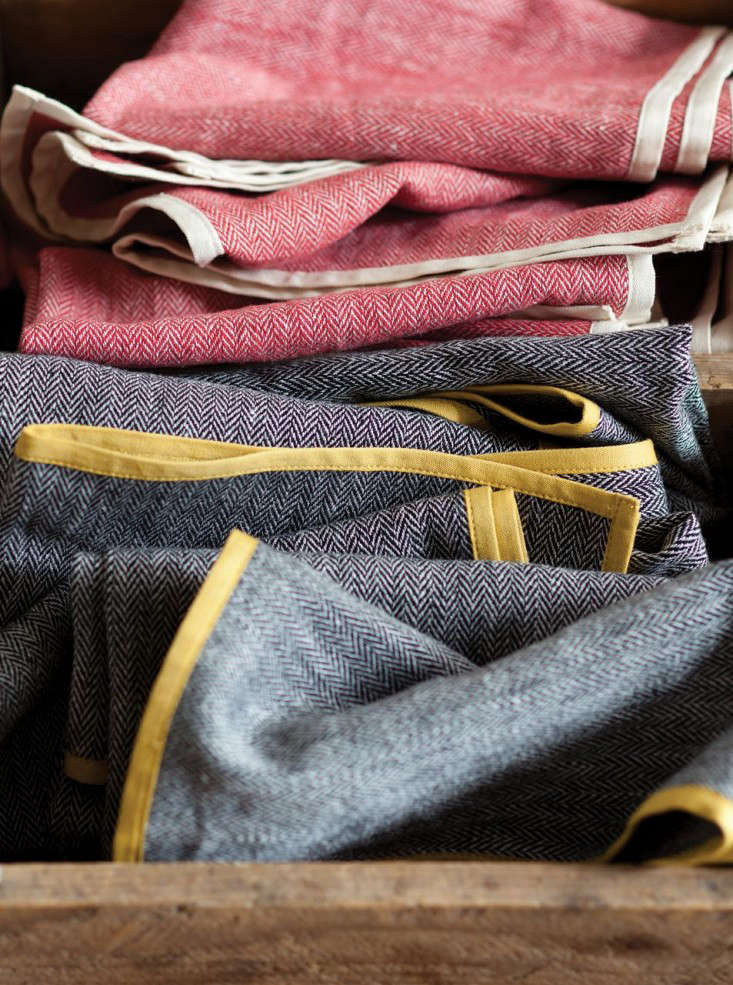 Above: Herringbone-patterned linen-cotton napkins with contrast piping. Each is an 18-inch square; they’re sold in sets of four. Most of the company’s linen goods are made in India and led to the name Sir/Madam–inspired by the salutation in emails from their Indian contacts. 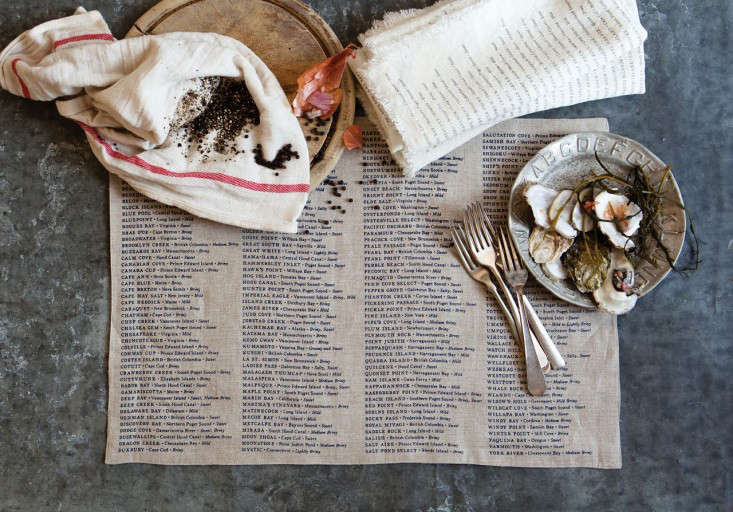 Above: Jesse James and Gus Anagnopoulos love to eat oysters, and, like birders, started keeping track of all the North American varieties they’d sampled. They later expanded the roster into “a full-fledged effort to compile the definitive index of these tasty little mollusks.” Here, it’s applied to a linen placemat and napkins with softly frayed edges. 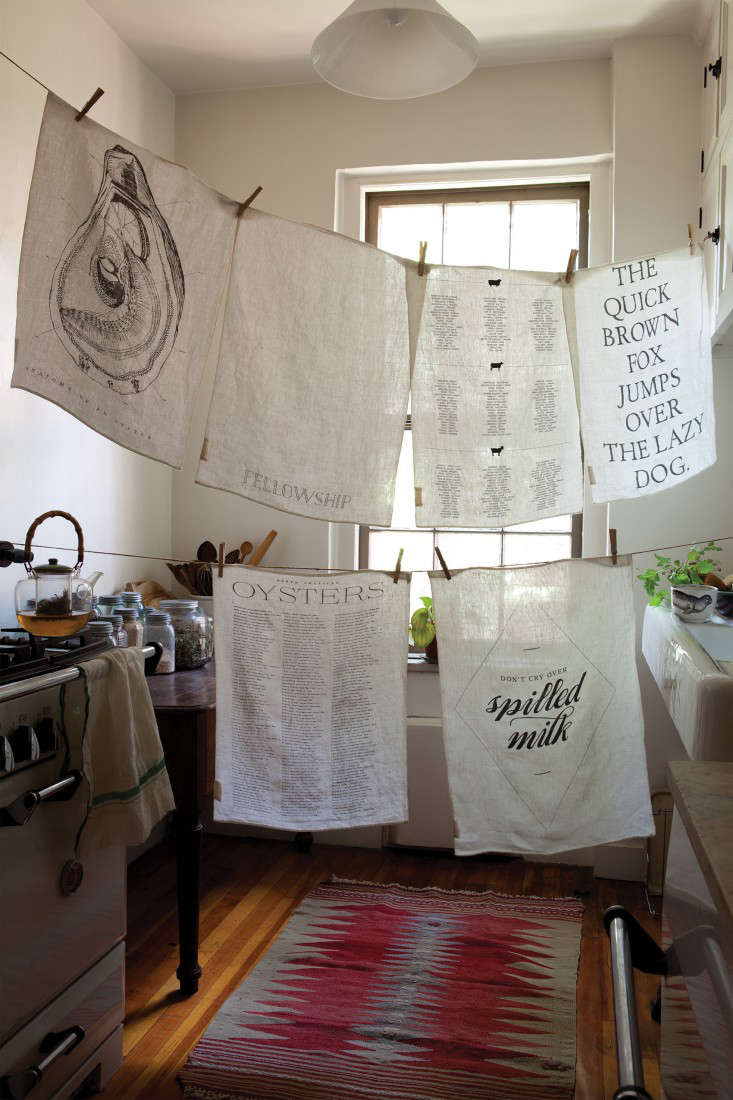 Above: Sir/Madam’s tea towel patterns include an anatomy of the oyster and a list of world cheeses by milk content. They’re $28 each and made of 100 percent linen, the longstanding ideal for drying glassware and china because it doesn’t leave any trace of lint. 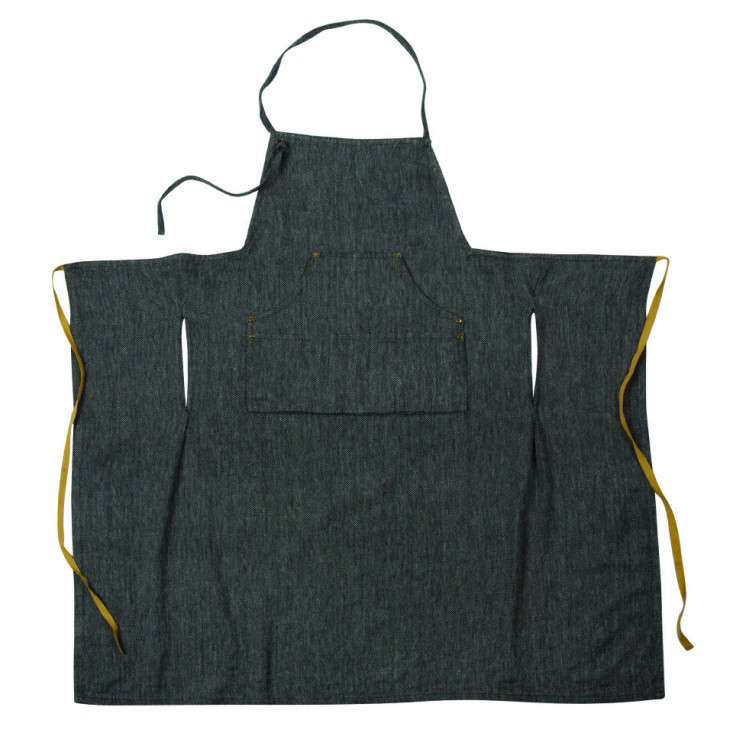 Above: The Grand Apron of black herringbone-patterned linen-cotton, $90, has an adjustable neck loop and is 41-inches long, making it nearly ankle skimming on most people. Its opposite, a mini-skirt-like Worker’s Apron, $55, is also available. Both come in herringbone linen-cotton, as well as 100-percent linen in natural, white, or indigo. 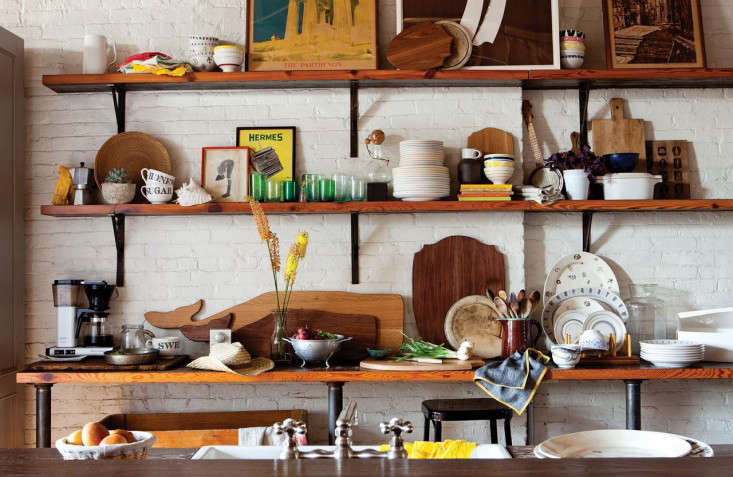 To view the whole collection and find store information, go to Sir/Madam.

Want to see more of the many pies that Aesthetic Movement has its fingers in? Check out Jesse James in Upstate New York, and our posts on AM’s other product line, Izola, including Canvas Shower Curtains with Graphic Prints and the Ultimate Shower Curtain Rings.

In collaboration with: Small Space Entertaining with Designer Jon Call

by Meredith Swinehart
May 16, 2018
Read all recent posts