Every few months, Alisa Grifo and Marco Romeny travel to a country to gather compelling everyday objects: “things that generally go unnoticed, products that are the result of local aesthetics and needs.” Back home in New York, they unveil their finds at Kiosk, their online shop and its companion tiny gallery, newly relocated to a building on Union Square.

In a world in which so much for sale looks familiar, Grifo and Romeny’s finds are singular and soul stirring–and they save us from having to fly home from Athens with a must-have tin food safe or enamelware three-burner stove perched on our laps. Have a look at what the two found in Greece (good news: much of the collection is currently marked down). And even if you’re not in the market to buy, Kiosk’s off-the-cuff product descriptions are not to be missed. 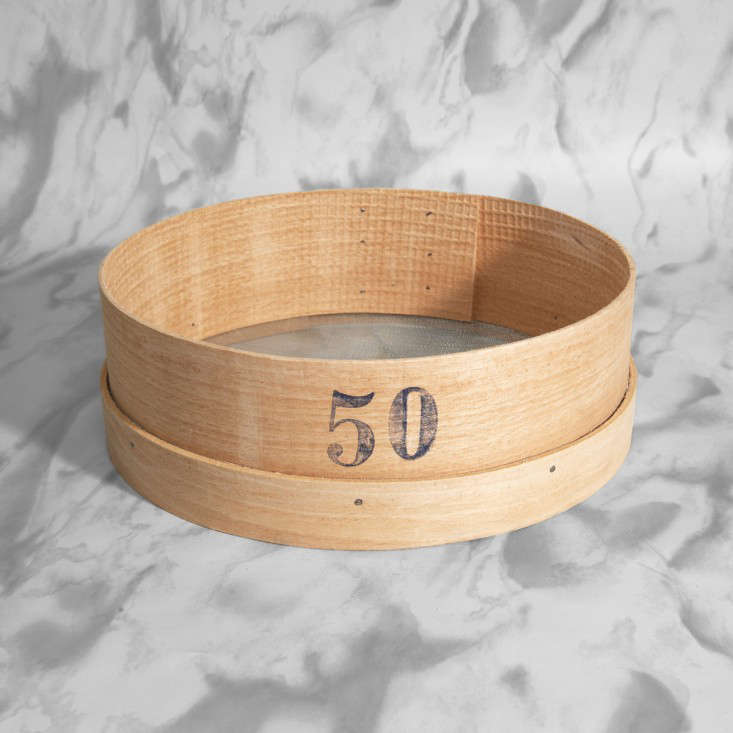 Above: Made of wood and metal, this Greek Sifter ($28) has a mysterious 50 emblazoned on it. “I was wondering why we were seeing sifters used in so many contexts in Greece,” writes Grifo in the Kiosk catalogue, “and then it dawned on me–archaeological sites, a plethora of them, and what is the most common tool at such, a sifter naturally.” 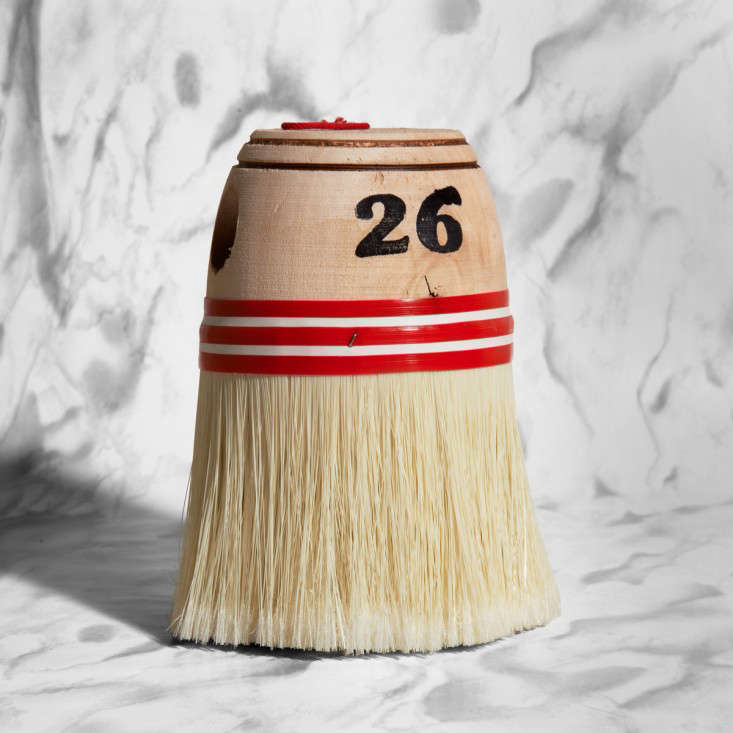 Above: A Round Paintbrush ($34): “Indeed! It is a giant paintbrush. Use with a pole; paint the town. I’m turning this brush over and sticking pens in it right now…All those white walls in the Greek islands must be whitened by some clever method. I’m ready to commit to a year of research to find out.” 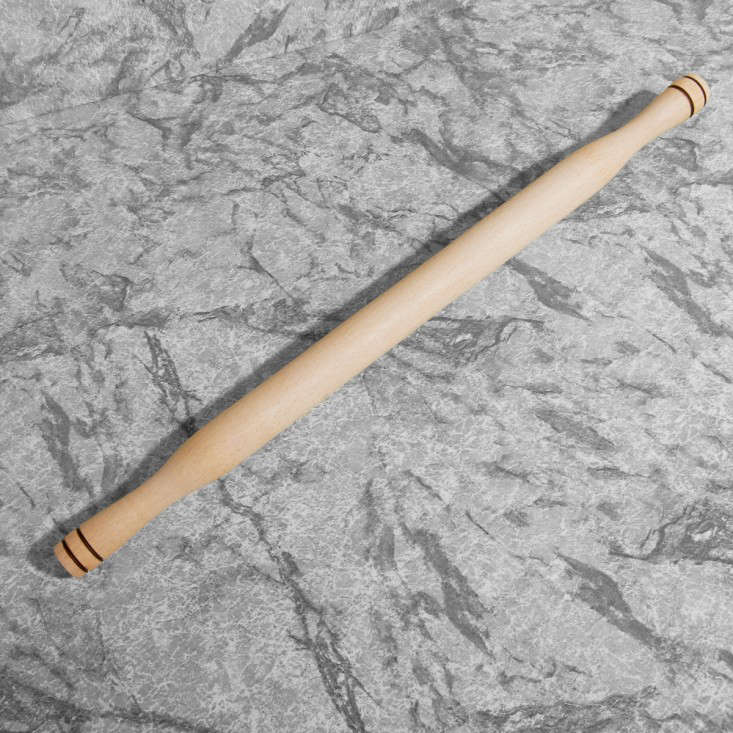 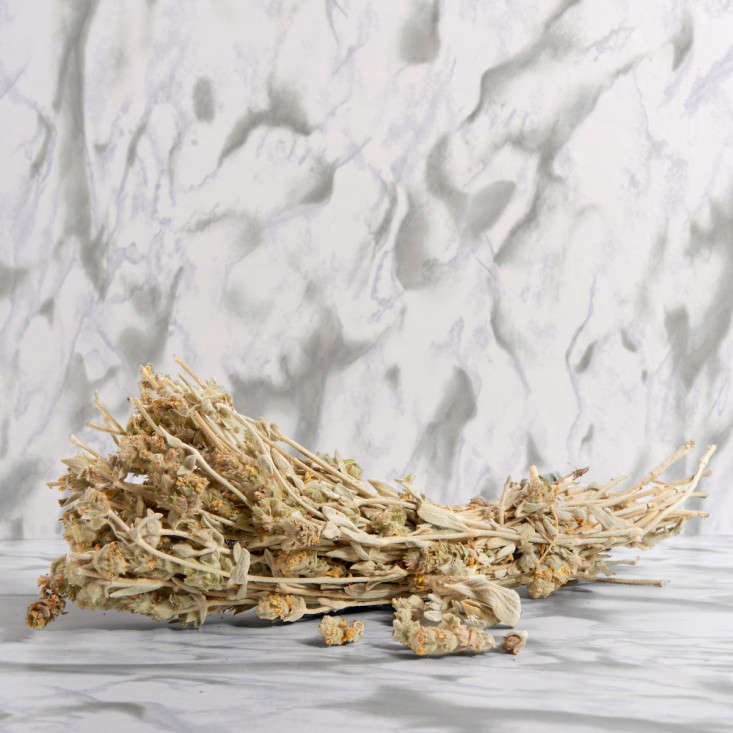 Above: Mountain Tea, wild Sideritis (also known as ironweed), is on sale for $14.70, marked down from $21. The couple write that this herb was the item most requested before they left for Greece. “Tastes a bit like thyme blended with camomile,” says Grifo, noting that the Sideritis they sell is harvested in the mountains of the Peloponnese and is a cure for just about everything. 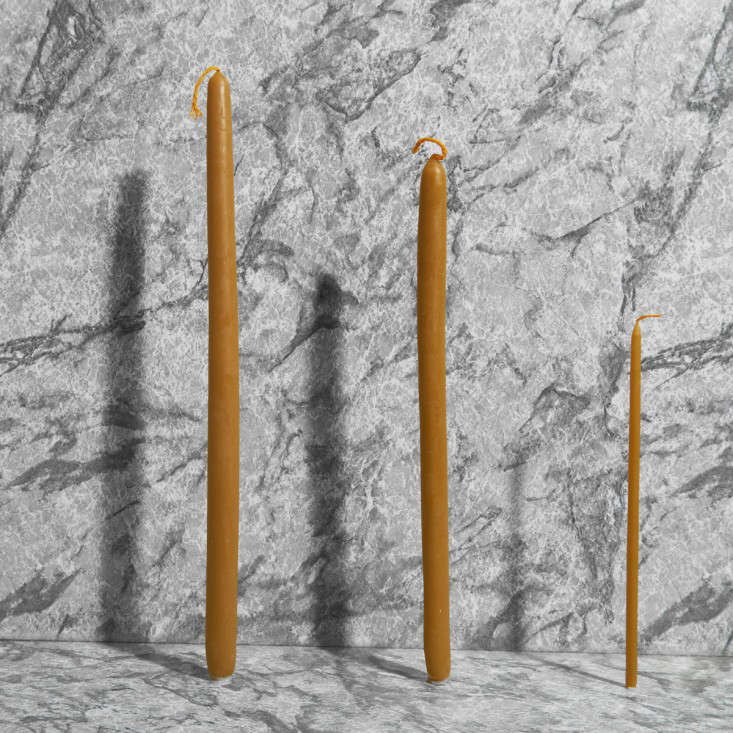 Above: Greek Beeswax Candles are offered in three sizes, priced from $6 for a set of five of the smallest to $12 for a pair of the large, 15-inch tapers. 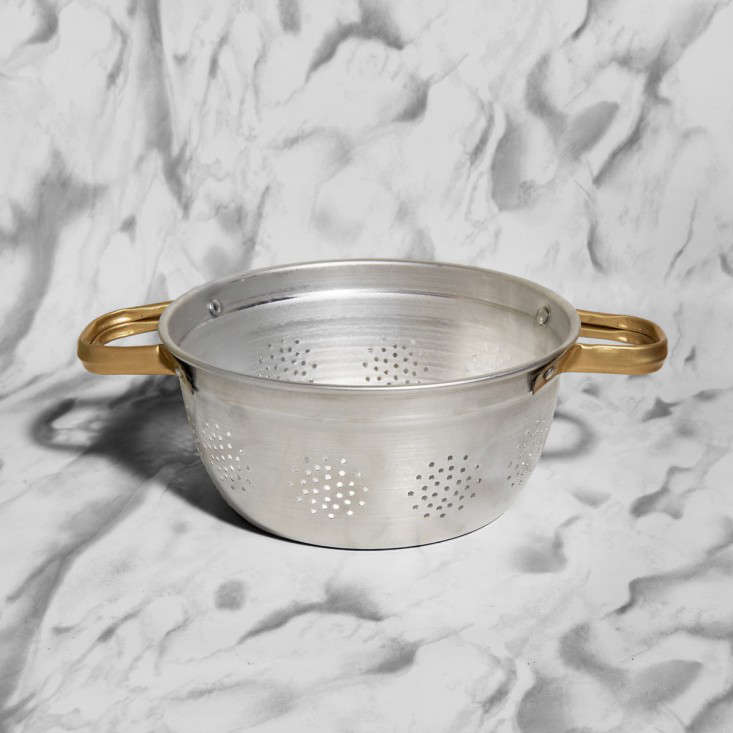 Above: Our food guru Joan McNamara of Joan’s on Third in LA took a recent trip to New York and made a beeline for Kiosk to procure one of these two-toned aluminum Strainers ($24). “Not too big, not too small, and not too heavy” said Joan as she offered us just-washed cherries straight from the strainer. 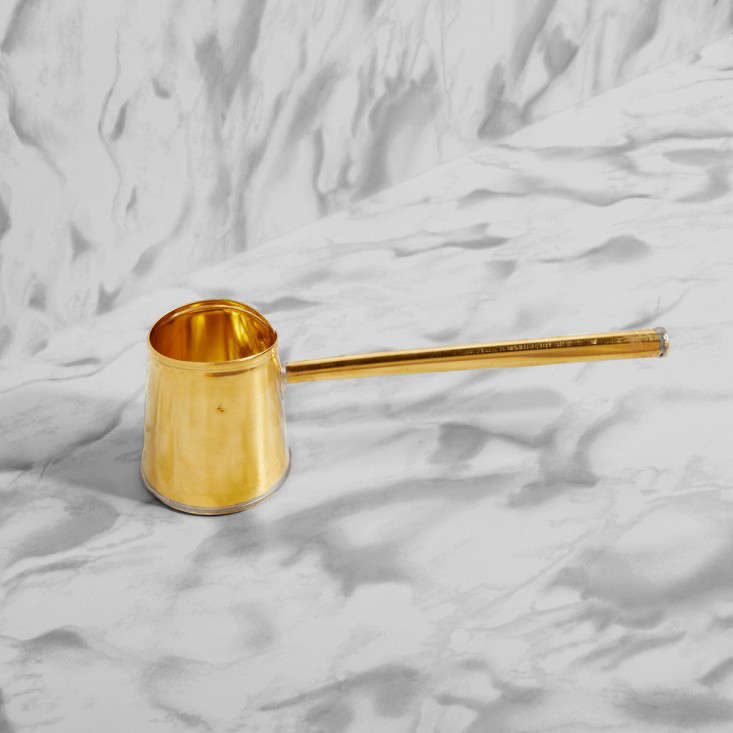 Above: This aluminum Coffee Pot is reduced from $16 to $11.20. Here’s the Kiosk recipe for Greek coffee, which Grifo points out is akin to Turkish coffee (but never called that in Greece): “Heating water in the pot, or briki, one adds a small teaspoon or two of finely ground coffee with some sugar at the same time. A medium coffee, which is the way I take it, is equal parts coffee to sugar. Take off the heat just as it starts to foam. Generally cooked over a flame today, it can also be found warming in a pan of hot sand, or a hovoli, to mimic the warm ash of a fire, the traditional cooking method.” 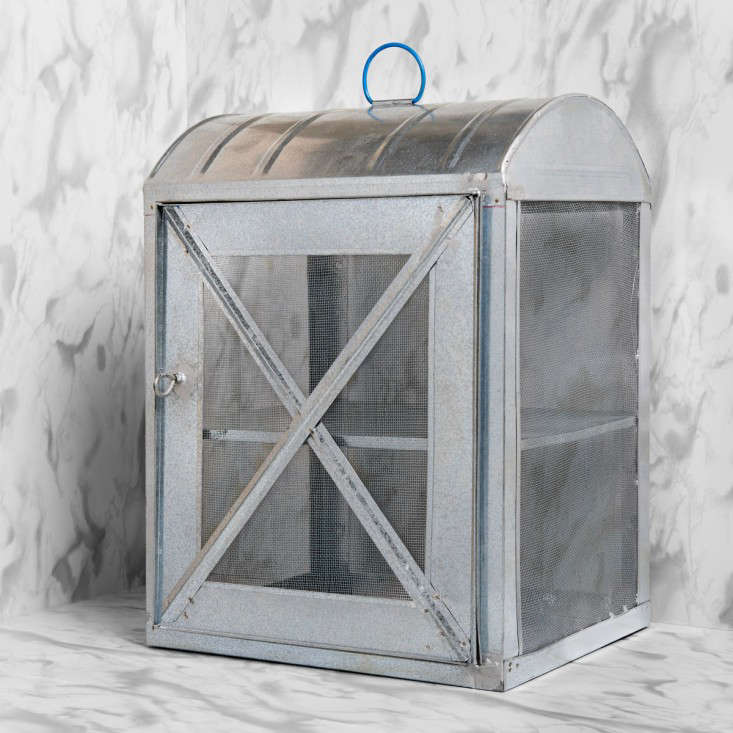 Above: Made of steel with screened walls, the Kitchen Box, 15-inches tall, 13.5 inches wide, and 10.5-inches deep, is traditionally used for aging cheeses and meats, and for keeping other foods “out of reach from unwanted munchers.” Grifo says that she and Marco plan to put several of them to use as kitchen cabinets hung from ropes or mounted on a wall, “one for glasses, one for plates, one for dried goods.”  Originally $110, they’re now $77 each. 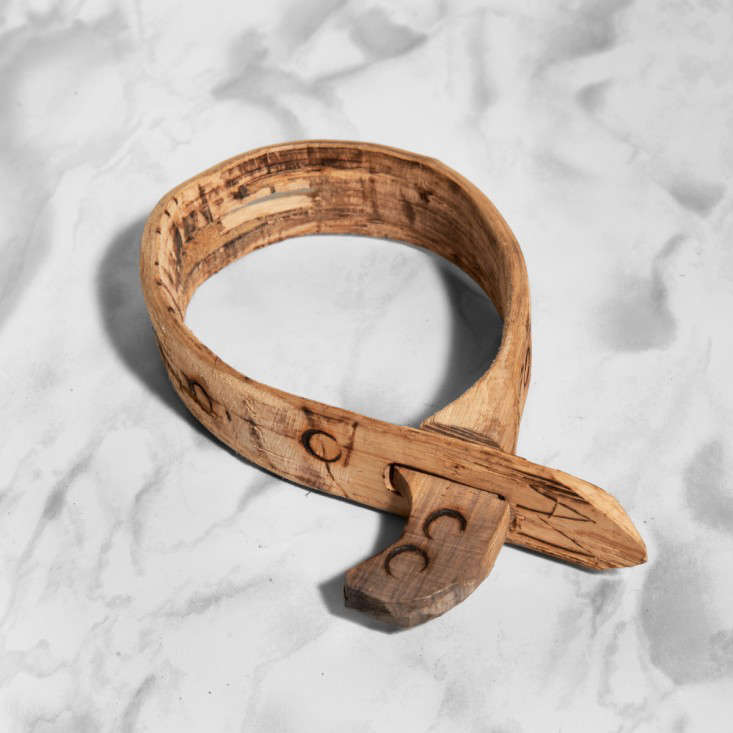 Above: A zevla is a traditional Wooden Collar for goats: “When soaked in water for some time, it becomes quite flexible. Taking it off is another thing.” Detailed with burned wood markings, the collar doubles as wall sculpture; $22.50 reduced from $32. 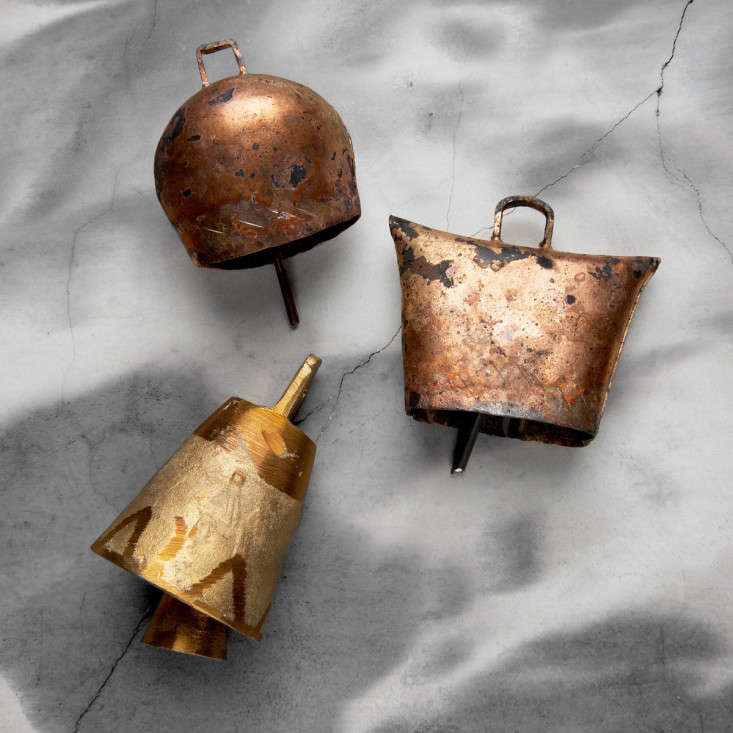 Above: Greek Animal Bells ($26 to $32 each): “The round bronze one is for sheep, the more square one for goats, and the ‘golden’ one is for posh goats…Poshness aside, each bell has a distinct sound, and this helps the shepherd locate his or her animals.” 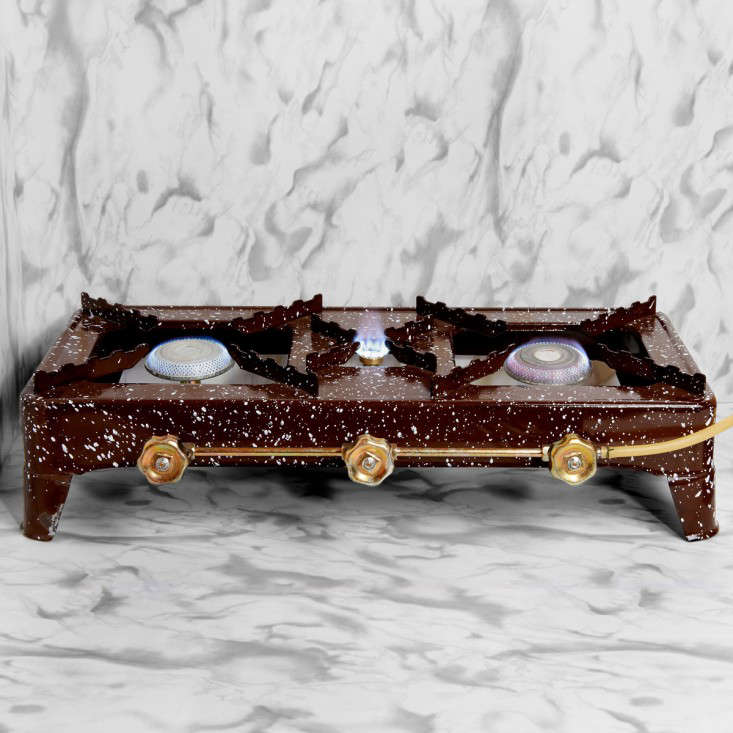 Above: Perfect for the compact apartment–and an item only Kiosk would take the trouble to import–this brown speckled, enameled steel Stove with Three Burners is $105 marked down from $150. As you might suspect, setting up this contraption takes some doing. “It has a 1/4-inch barb fitting, so BYO (j) G–bring your own (jazzy) gas (and regulator and hose and crlmp)–if we can get it to work, so can you,” writes Grifo. “I watched a man cook for an entire outdoor restaurant on one of these.” 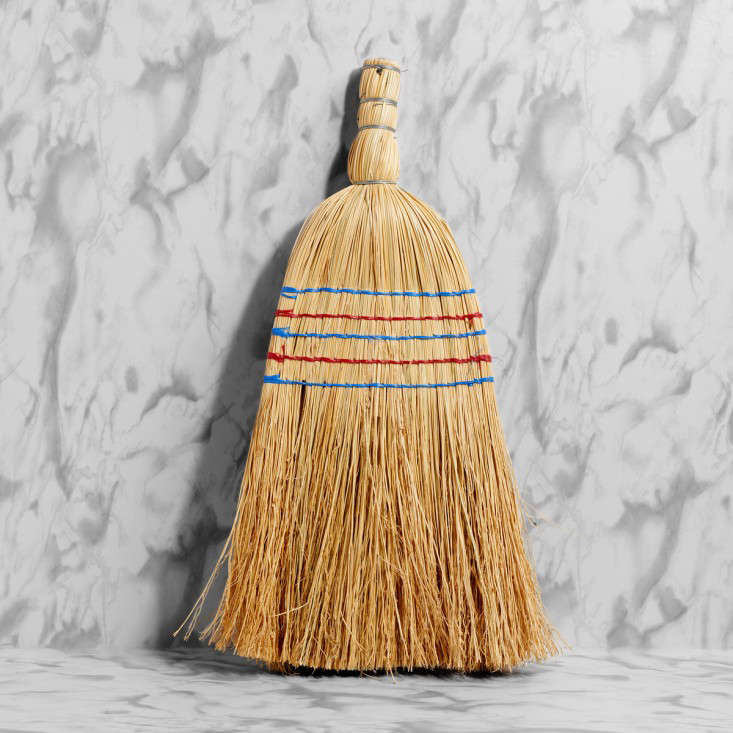 Above: Greek Handbroom, $36: “This broom comes with no stick. Perhaps it took the wisdom of an ancient civilization to conclude that’s there is really no good reason for the stick, unless you happen to be an avid sweeper…If you are like me, a casual sweep, you don’t need professional equipment. Also, like me, you may be short on storage space.”

Above: Oinometra Cups ($14-$23 each) are made of aluminum and used in tavernas, the blue for water, the red for wine, and the golden for olive oil. Have a look at our recent post: Going to the Greek: A DIY Dinner Party to see the pitchers put to use. 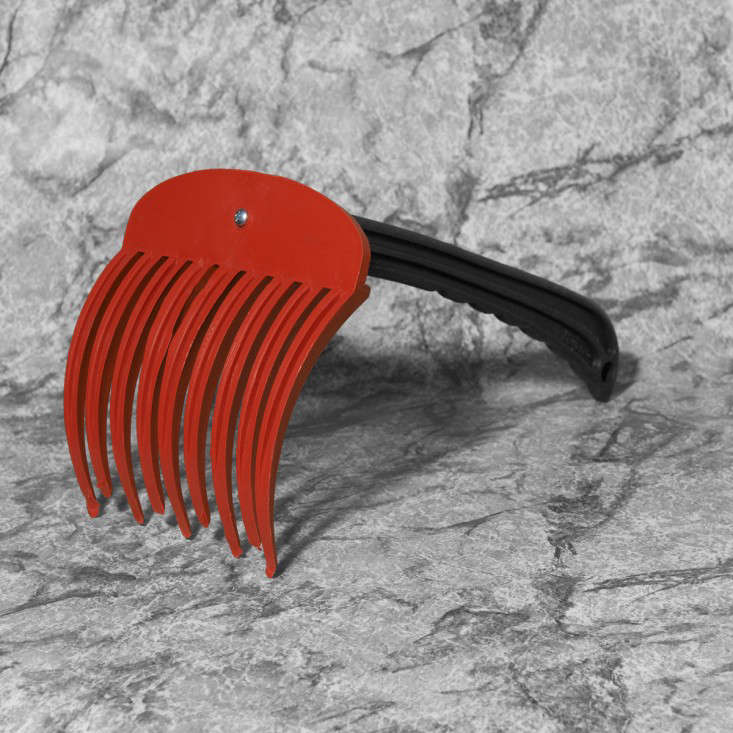 Above: An Olive Harvester, made of plastic and tested out on an olive tree by Grifo; reduced from $14 to $9.80. 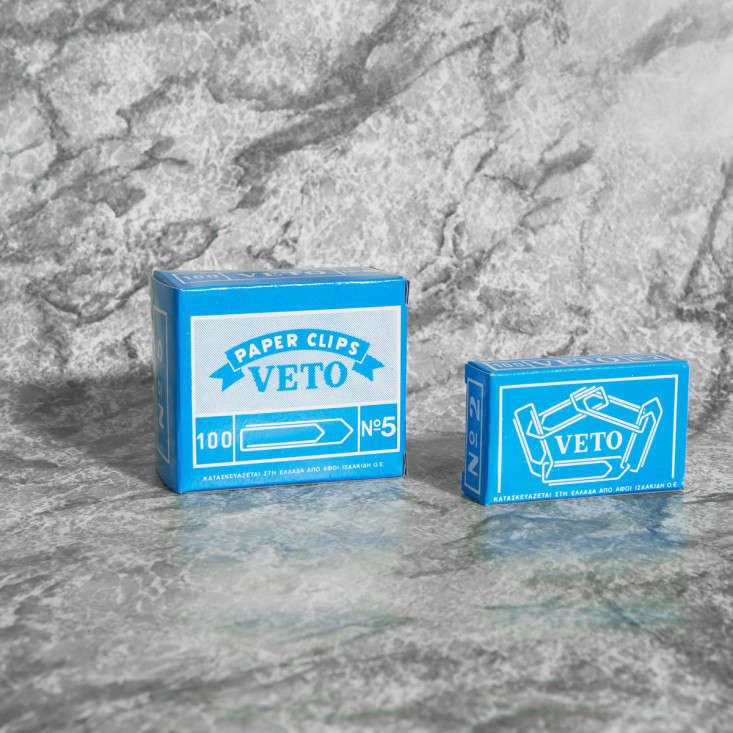 Above: Greek Paperclips, $4 to $6 a box. Foreign paperclips–and lovely classic packaging–are two Kiosk specialities. These presented Grifo with the opportunity to compare the daily outlook of Greeks and Swedes (they also sell Swedish paperclips). She concludes: “although Greece is ‘broken’ economically, I saw more joy there in one hour than I would see in a week in Stockholm. And so, here I offer you these humble paperclips.”

The Kiosk clubhouse is newly located at 41 Union Square West, #925, in New York, and is currently only open Thursdays and Fridays, from noon to 7 pm.

Go to our Travel Guide to explore more of our favorite New York haunts. (On Gardenista, check out Best Made Co.). And have a look at all our Tabletop & Dinnerware discoveries.

Trending on Gardenista: The Mediterranean Way to Garden

Crafts and Kinship: Broom Making, Weaving, and More at Berea College in Kentucky