When industrial designer Catherine Bailey and product designer Robin Petravic took over the reins at Heath Ceramics in 2003, the company was most noted for its iconic dinnerware. Since then, the Sausalito-based company has helped put tile firmly on the map, taking what was once considered mostly a functional material and helping it become a major element in interior design today. We sat down and discussed the merits of tile. 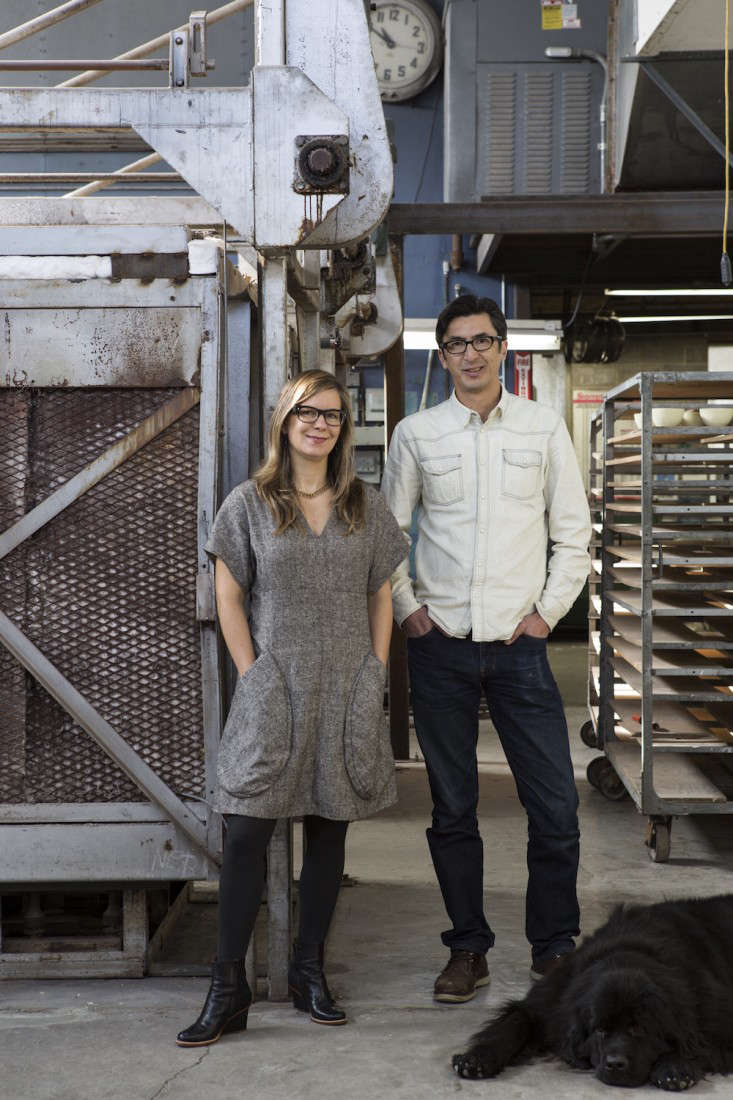 Above: Catherine Bailey, Robin Petravic, and their dog, Oliver, in the Heath Ceramics factory in Sausalito.

Remodelista: When you bought Heath in 2003, what was your general perception of tile?
Catherine Bailey: I was already interested in tiles before Heath. When I lived in Portland, OR, I would go to Pratt & Larson and there was a room full of tables with tiles and I’d mill around and buy tile with no place to put it, just thinking someday I’d like to do something with it.
Robin Petravic: Prior to Heath, I never really thought about tile too much. It was this functional thing then, and I wondered why people weren’t doing anything more with tile. 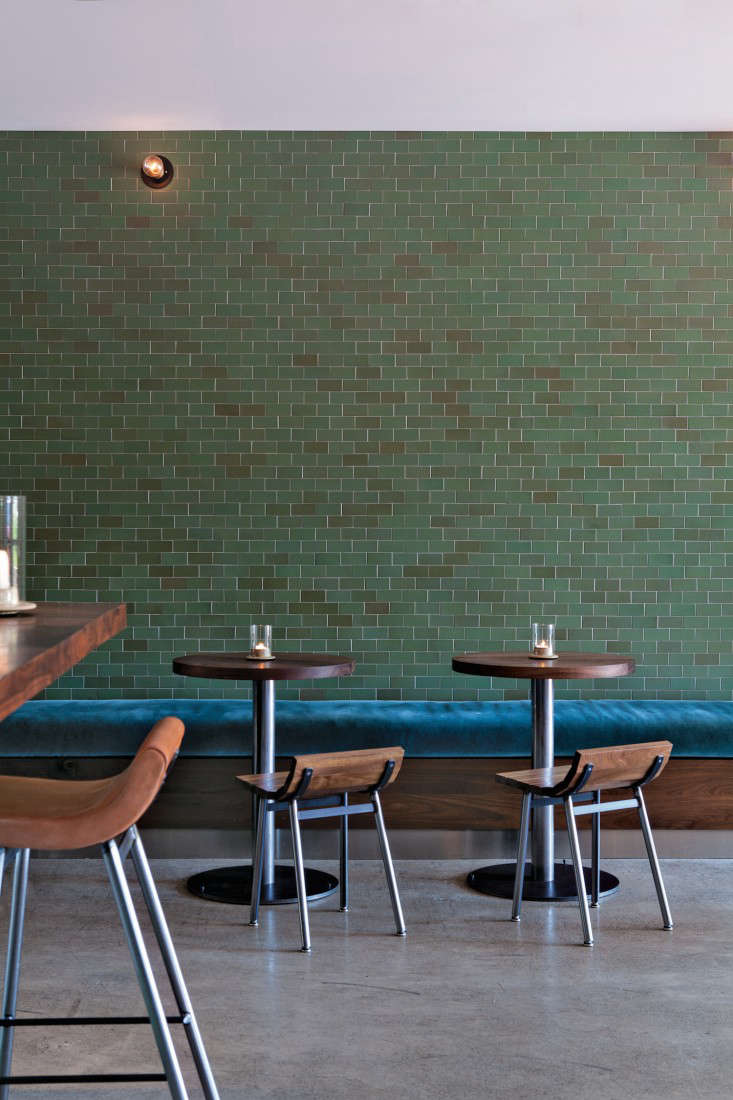 Above: A wall of Heath’s copper green tiles at Farmshop Restaurant in Marin, designed by Commune Design.

RM: When did your perception of tile change?
CB: A lot of tile was happening in the eighties with everything in a grid and that got stuck in people’s heads. We saw the shaped tiles that we make at Heath with such wonderful depth and texture–while they were different, those shaped tiles felt right and represented tile as a very clear design element. Focusing on that was a way to open people’s mind to the possibilities of tile and that became more interesting to us.
RP: This was an amazing installation at the Maritime hotel in New York, the Matsuri restaurant [now closed] with green Heath oval tiles that covered a massive wall that spanned the space from end to end. It was part of the architecture.
CB: Also the Pasadena Norton Simon Museum built in 1973, which used Heath tiles with a really unique lava-like glaze. No other material would be as wonderful, and it’s aged so well. From far away it’s great, but when close up it’s an amazing glaze and you can really see it’s a handmade material. 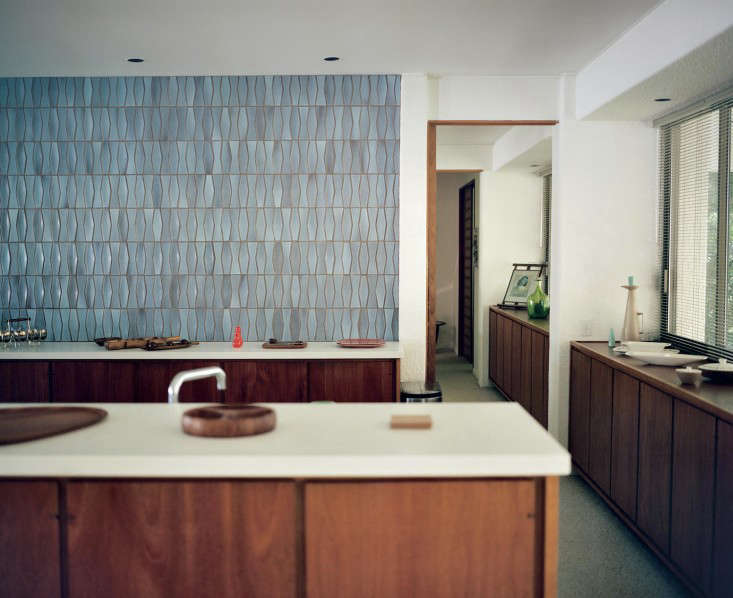 RM: What should people know about tile?
CB: You have to realize it’s not wallpaper. You’re putting it in for life or at least 20 years so you should think of it differently. It should meld in with the architecture of the space, it’s not a covering. You should really consider if you are doing something too showy or too of-the-moment. It’s not a fashion statement. It should become part of the building. In the book we have tried to show examples of older tiled buildings that have aged. Good quality tile will age well and can patina nicely.

RM: How do you think the tile industry has changed over the past decade?
RP: There’s been a shift in tile. The only choice used to be Home Depot or depressing tile show rooms that were really undesigned and uninspiring and overwhelming. Now there is so much access to inspiration of what you can do with tile such as on websites like Remodelista. 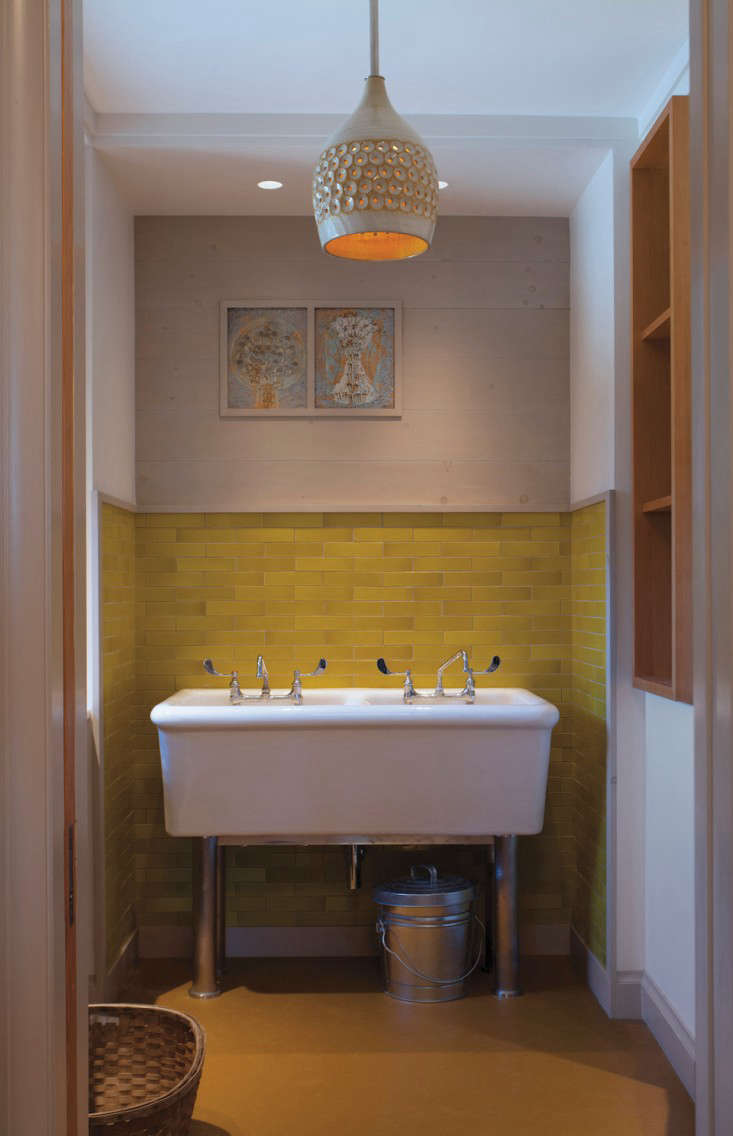 Above: Yellow tile around a farmhouse sink in the upstate New York home of Alan Wanzenberg.

RM: How has the use of tile changed in recent years?
RP: Tile used to be used to make an environment antiseptic. Everything would be covered in a bathroom and all the corners would be rounded in bullnose and it would look a little soul-less. In the book we show a lot of ways to use tile. For example, New York architect Alan Wanzenberg uses wood trim around the tile in his laundry room. Using bullnose there would have ruined it. 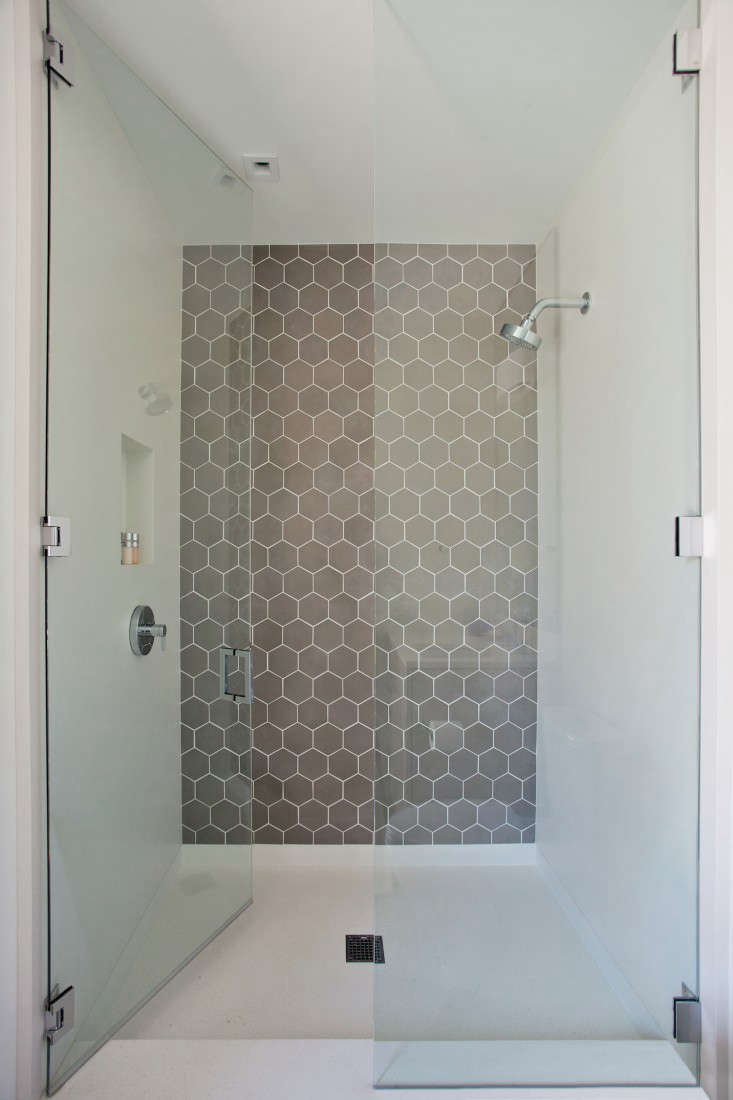 Above: The tile in this shower designed by San Francisco–based John Maniscalco Architecture uses pattern to define the space.

RM: The importance of grout?
CB: Grout is a serious decision and there is a much broader way to look at it. It’s a major part of the design, whereas it’s still often treated as the afterthought of the installation. If you do it wrong it’s hard to fix it.
RP: Think about the spacing of the tile. Do you want it to be about the shape of the tile and the texture of the tile? What do you want to accentuate? Do you want the grout to recede or stand out in the background? When you have such a range of color and glazes, you don’t want too many elements.
CB: It’s important to think of lifestyle, too. For our lifestyle we could never think of using a light colored grout on floors as we have these giant slobbery dogs, so we went with the darkest grout we could find.

RM: Unlike paint you can’t really test grout and tile, right?
CB: On some big jobs we might suggest a client make a board with grout and tile and they’ll test it in the space. That’s a bit much on a residential job, but you can take the actual grout powder and wet it a little–grout gets slightly darker when applied–and put it right on an extra tile. You can hold it up and see them together. 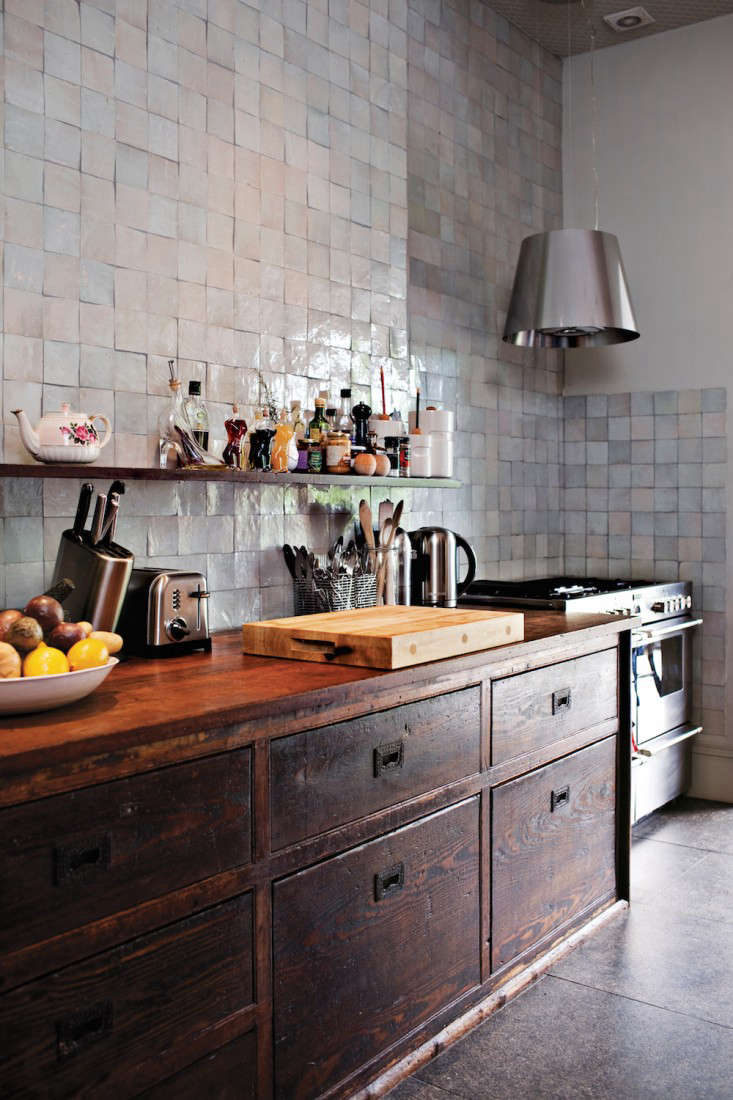 Above: A fully tiled wall in the salvaged kitchen of the Roddick’s London home by Maria Speake of Retrouvius.

RM: Observations on how European and American tile differs?
RP: We’ve basically noticed that with American houses, the approach is often to gut it all and do everything new–make it all straight, pristine, and clean. In Europe we saw that people worked with the inconsistencies of the building. The Roddick house in London [featured in the book] has so much character. The walls aren’t straight and there’s character in the way the tile layers with the old wood cabinetry in the kitchen. In current American design there seems to be less interest to work with elements that are old, and sometimes that can mean some of the soul and character of a building is lost.

RM: Thoughts on the future of tile?
CB: There’s a lot of technical, mass-produced stuff going on with tile that’s aesthetically interesting, pristine, and precise, and technology has given rise to a lot of cool stuff like print. Right now there’s a lot of engineering in imperfections to make it look like it’s handcrafted, but it’s fakery. It looks pretty good until you get close. That’s not as interesting to us. What we love and appreciate is the lack of control in the process of firing glazes and embracing that. It is expensive to make tile the way we do it at Heath–but with our approach, tile has more character, richness, and depth, which can do wonders for the larger design of a space. The world of inexpensive tile will continue to grow, but there’s also a renewed appreciation for the tile we make and how we make it. 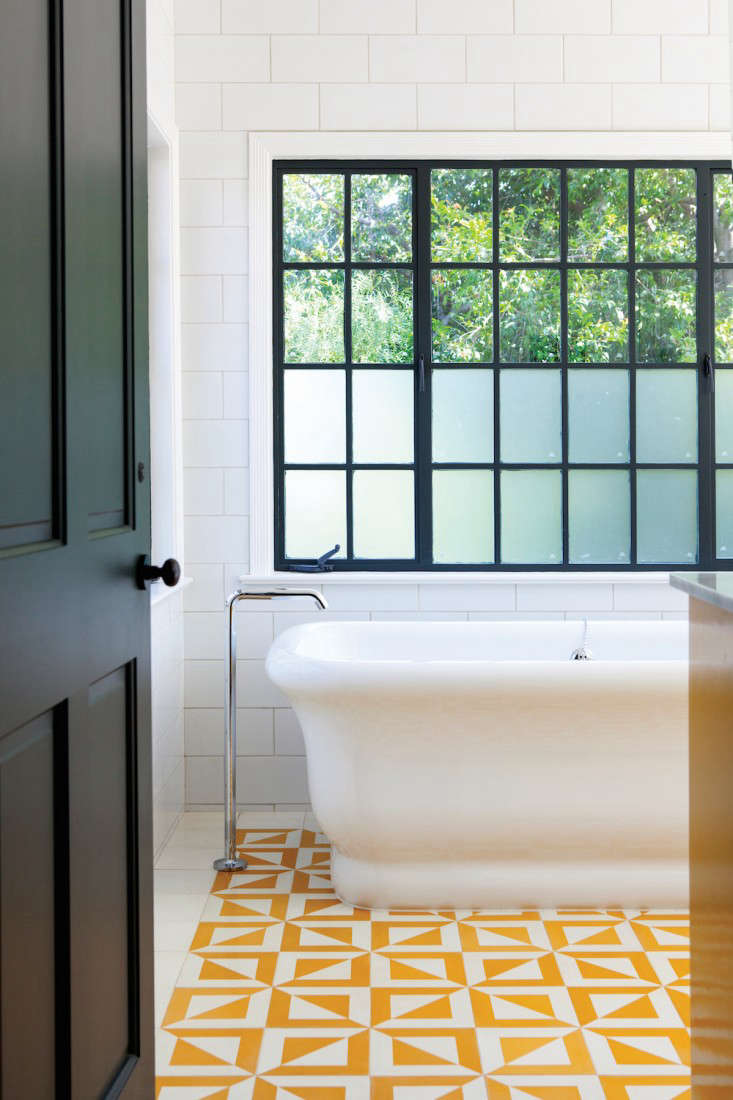 Above: Barbara Bestor of Bestor Architecture juxtposes bright yellow tiles in a geometric pattern with a clean white interior in this Los Angeles bathroom.

RM: From your travels, what has been your most blow-away tile experience?
CB: Portugal in general is so exciting. Robin said it best when he wrote on Instagram, “The Portuguese use tile the way stucco is used in LA.” They love to tile every little crazy place on the exterior with patterns. It’s fun. Also the tile museum in Lisbon is super-thoughtful and inspiring, and we never tire of the Eastern building and Union Station in downtown LA. And Gaudi in Spain…there’s so much good stuff.

RM: What do you wish people would understand about tile?
CB: Tile is one of these elements of design that you can make yours. There are so many options from variations in colors, shapes, and finishes. It can be overwhelming, but you can really make it yours.

Above: Tile Makes the Room: Good Design from Heath Ceramics by Catherine Bailey and Robin Petravic, published by Ten Speed Press is available from Amazon for $22.

For more on the interiors featured in the book, see these posts:

Kitchen of the Week: A Waste-Conscious Remodel for a Ceramic Tile Designer