A year ago, when Dale Saylor and Joe Williamson’s son, Henry, was about to start walking, they realized it was time for them and their two golden retrievers and black cat to bust out of their one-bedroom apartment. Fortunately, a two bedroom became available just three floors up in their Chelsea high-rise in New York. So they made the world’s easiest move. But with a challenge: To keep costs down–and because they spend half of every week in a house in North Chatham, New York–they vowed: “Whatever we didn’t already own, we’d make ourselves.”

It helps that the two happen to both be designers: Together they own Hollymount, a design-build firm with a large upstate New York studio and workroom specializing in store design as well as prop building. (Members of the Remodelista Architect/Designer Directory, they also do remodels for private clients and occasionally moonlight as event planners.) But even though they had fabrication help on hand, they stuck to a keep-it-simple-and-inexpensive mandate for the apartment.

How to transform a characterless 1,200-square-foot modern shoebox into a place with their stamp on it? “We used things like drop-cloth canvas and neon twine from Lowe’s,” says Dale. 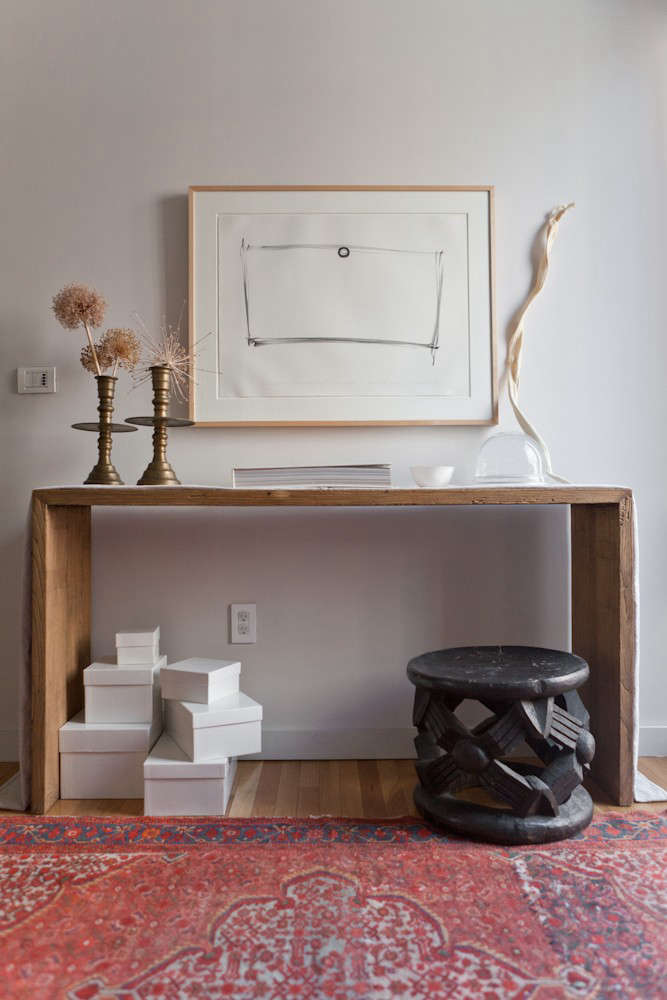 Above: In the entry, the console table–a contemporary piece made out of old Chinese wood–is from Dale and Joe’s days in the early 2000s living in Hong Kong, where Dale worked as a design directory for Burberry. The outsized snow globe and box shrine are the couple’s salute to Martin Margiela: “He’s so inventive with everything, even white boxes,” says Dale. The curious twisted object is dried sea kelp. 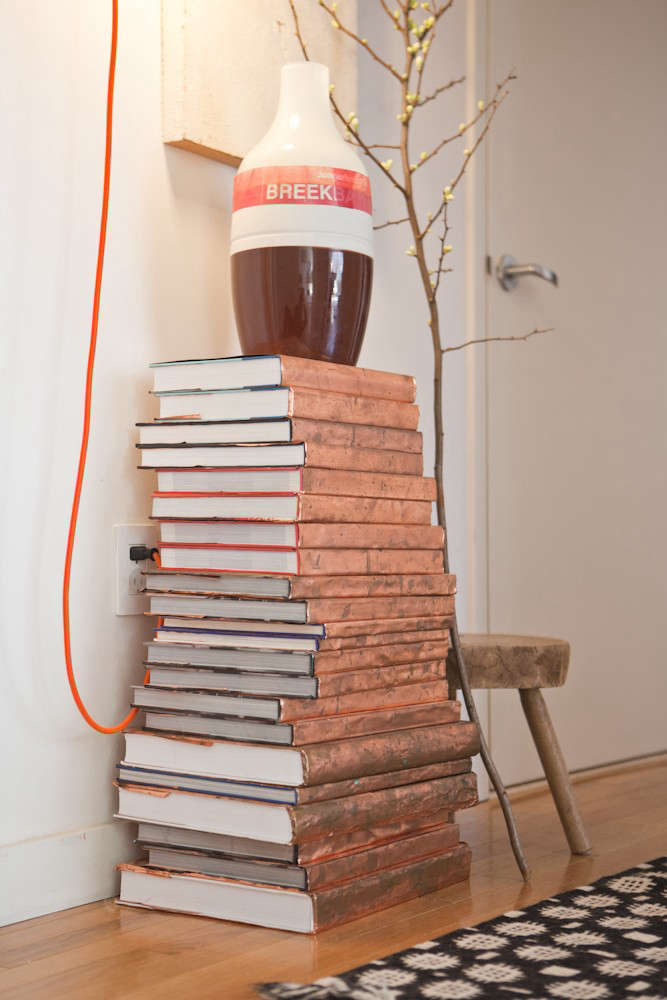 Above: One of the couple’s many weekend DIY projects is this pedestal built from books–”99 cents each from the remainder table at Barnes & Noble”–each slipcovered in copper chimney flashing from Lowe’s. The stack served as a bedside table in their last apartment and they like the way it’s patinaed. The vase resting on top, a Groove Bottle by Dutch artist Hella Jongerius, was a wedding present from Joe’s parents. 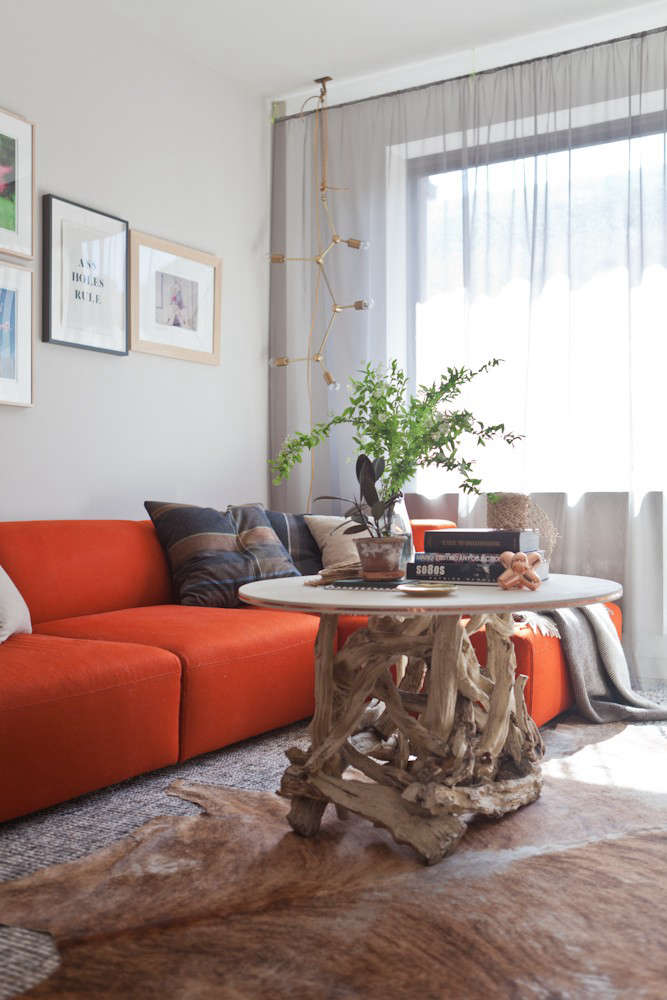 Above: The living room furniture–a wool sofa from Cite and a vintage driftwood coffee table, an eBay find–moved with the family. The light is one of Lindsey Adelman’s DIY Pendants assembled by Joe. It’s in front of window sheers made from Rose Brand fabric and lightweight aluminum angle rods found at Lowe’s that hang on neon green Mason Twine: “We thought, ‘Why try to hide the fact that they’re suspended panels?’ Instead, we decided to accentuate that detail by using neon.” 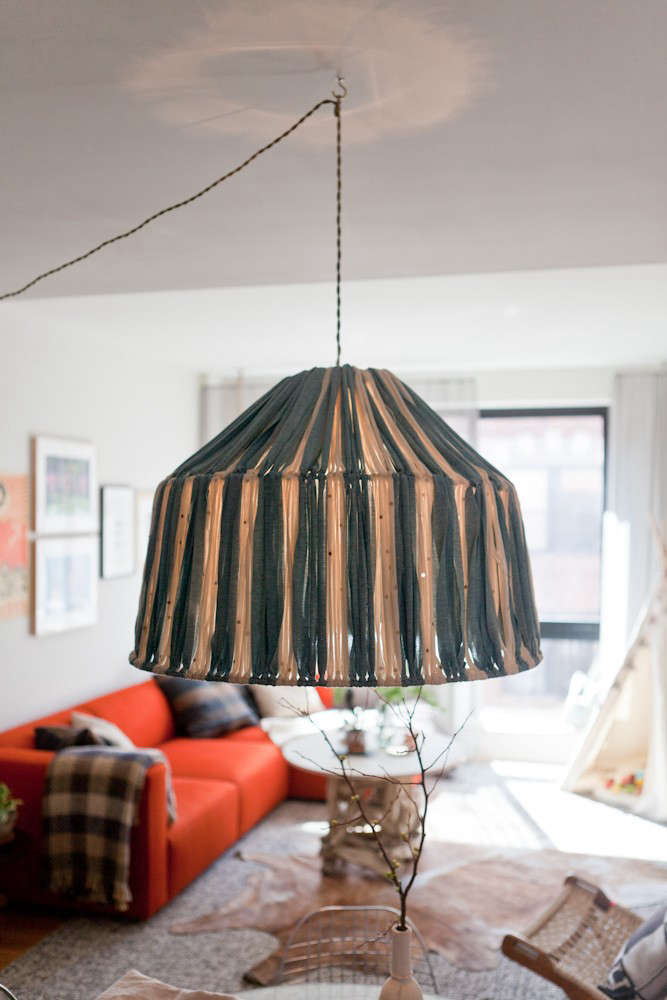 Above: A lampshade that the couple made from strips of vintage fabric and sequins hangs over the dining table. “It’s a prototype for a capsule lighting collection we’re working on,” says Dale, who, not coincidentally, spent six years as a design director at Victoria’s Secret. 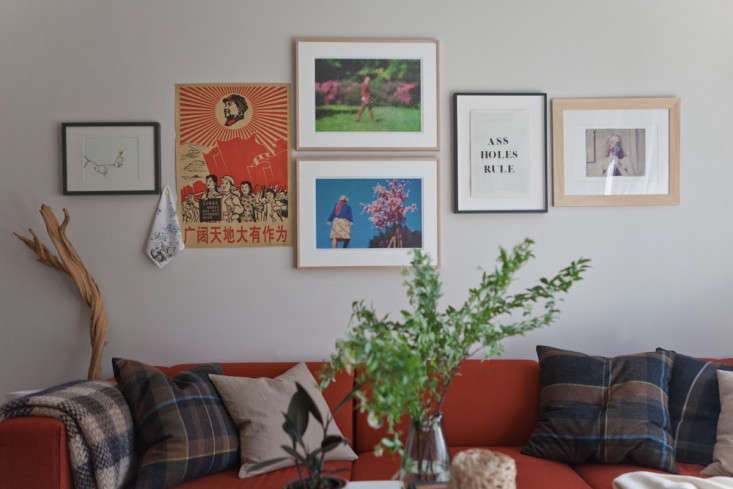 Above: The pillows are a high/low mix: “We made the plaid ones from leftover Paul Smith fabric, the others are from Ikea.” The wall assemblage ranges from a Chinese propaganda poster to photographs from affordable art site 20×200 and a Droog Hanky “to break up the order a bit.” The piece of driftwood was once a Burberry window prop. 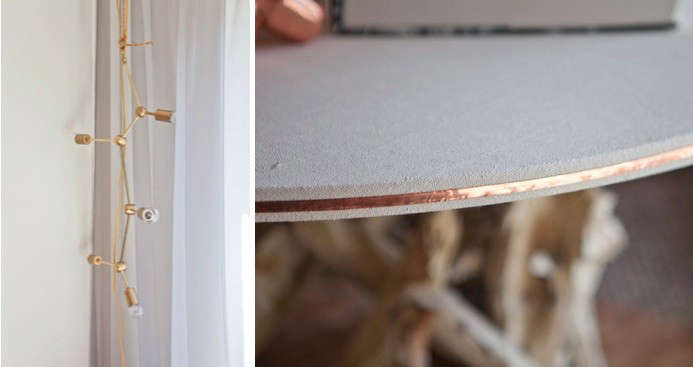 Above: The coffee table had a glass top until Henry toppled it. It’s now simply a piece of linen-covered, 36-inch plywood finished with an edging of copper tape to continue the metallic highlights. “We just stapled on the fabric and the tape is adhesive,” says Joe. “It’s for making stained glass; we found it on Amazon.” 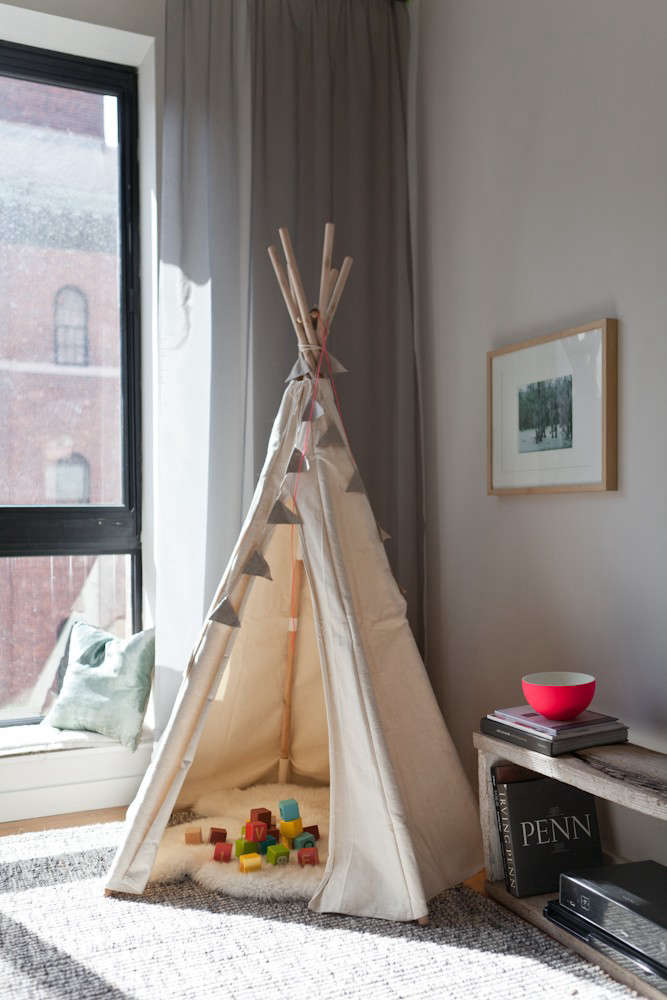 Above: Pitched in a corner of the living room next to a drop-cloth-padded window seat, Henry’s Vilac teepee is another Amazon purchase. (For more ideas, see Indoor Camping: Children’s Teepee Roundup.) 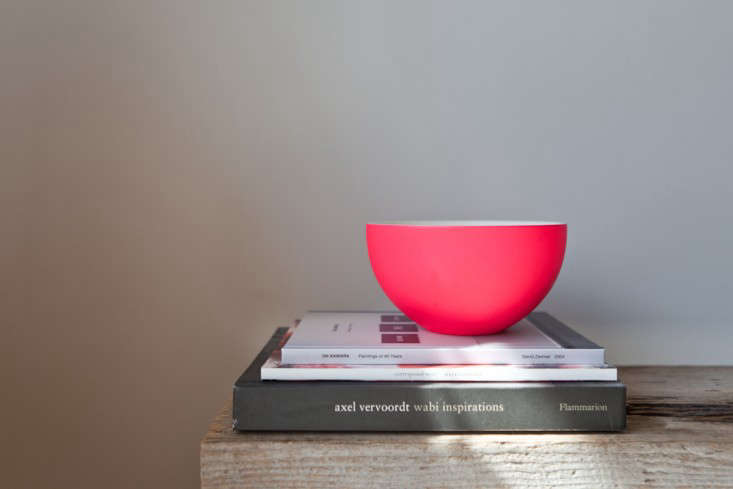 Above: A resin bowl from Hong Kong rests on a media console made from barn wood that came out of the family’s house upstate. 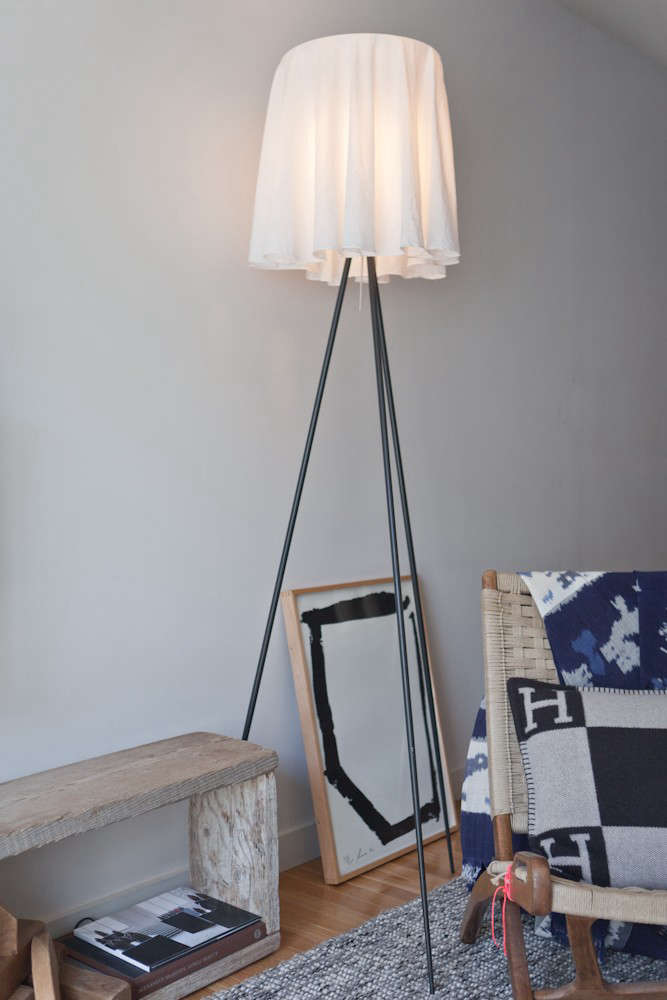 Above: The cloth-draped tripod light is Philip Stark’s Rosy Angelis Floor Lamp–”It’s been following us around forever,” says Dale. The rope chair is mended with a bit of pink mason twine. 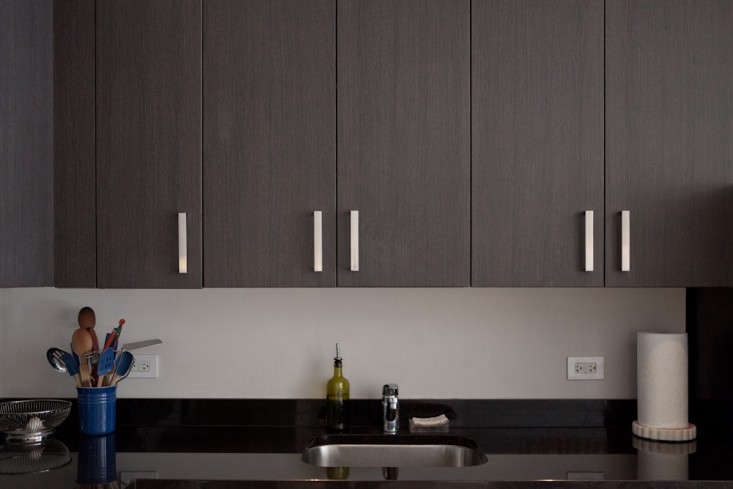 Above: Sequestered at the far end of the living/dining room, the open kitchen, with midnight granite counters and laminate cabinets, is “pretty nice as far as rental kitchens go,” says Joe. 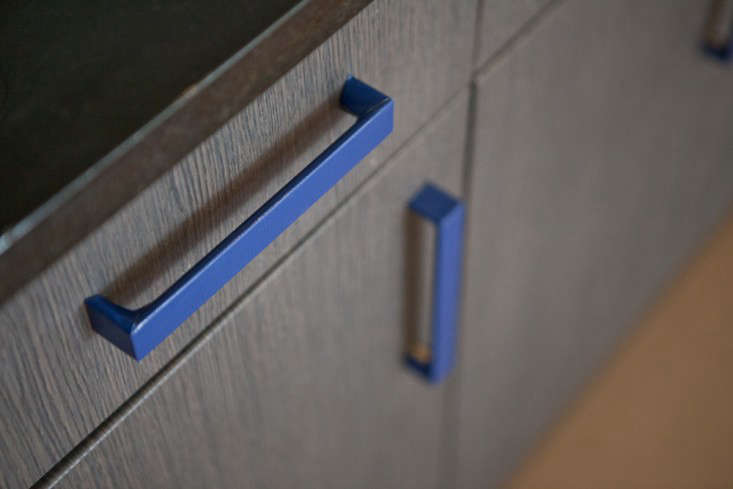 Above: “We thought about replacing all the metal handles with rope,” says Dale. “But then we said, Why not be easy? So we wrapped the hardware with textured duct tape cut with an X-Acto–and we still have a bunch to go. When we move, we can just pull off the tape.” 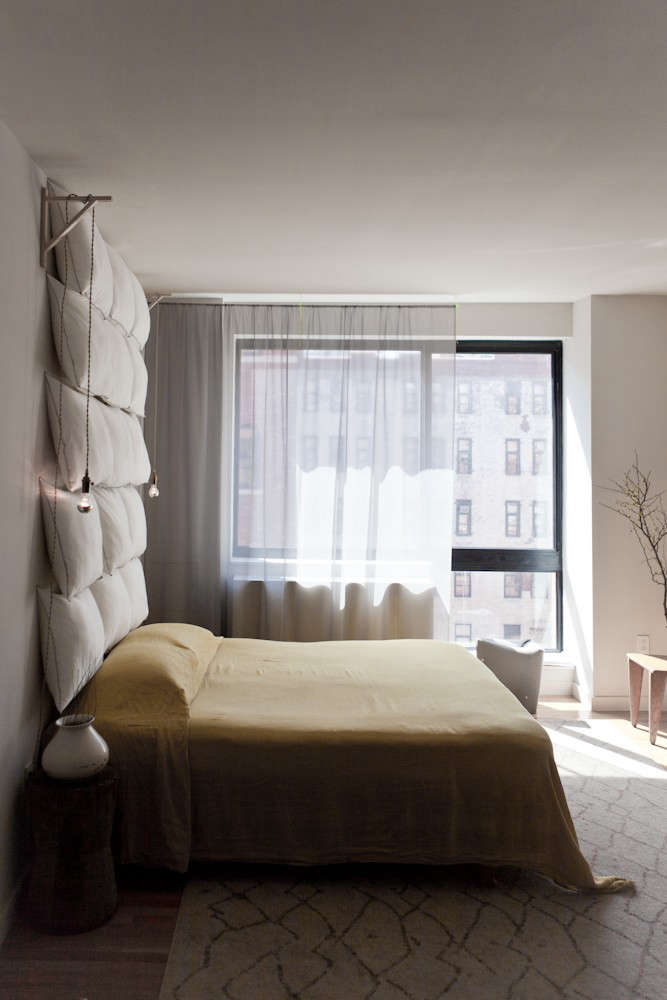 Above: Another homage to Martin Margiela, the master bedroom has a pillow headboard wall inspired by the Belgian designer’s cloudlike installation at Les Sources de Cauladie hotel in Bordeaux. The bedspread is a Linen Sheet from Merci in Paris. The room’s neon-strung sheers match the ones in the living room (and mask the air-conditioner). 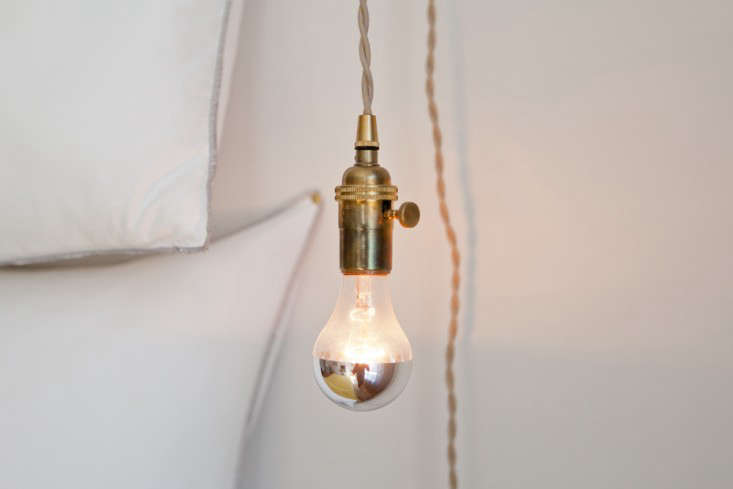 Above: Dale and Joe made their bedside lights from cloth-covered twisted cord sourced at Sun Dial Wire and brass lamp parts from Grand Brass (which also sells half-chrome bulbs). 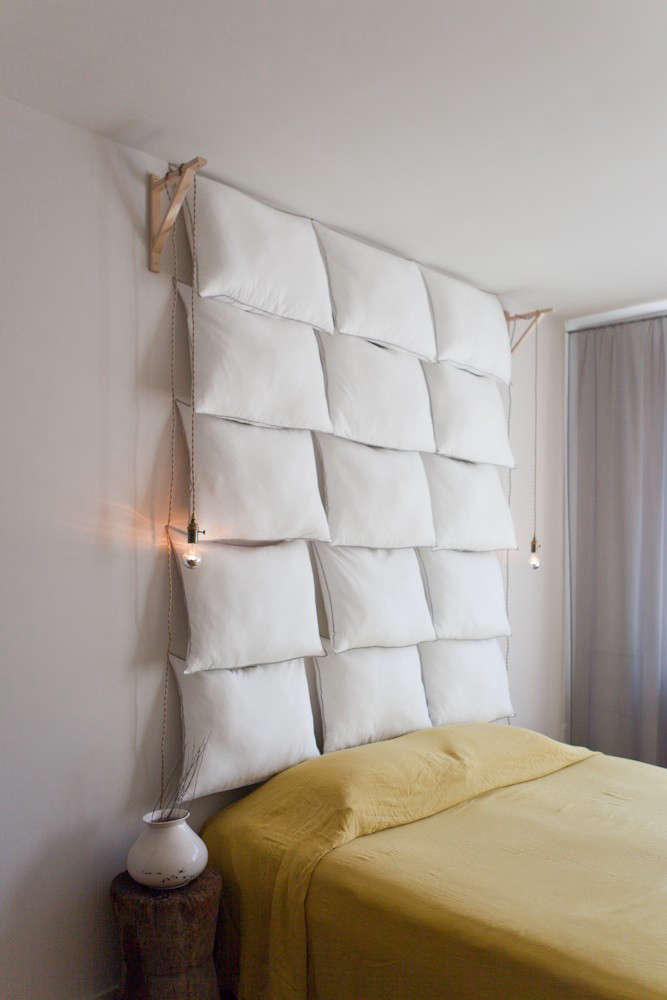 Above: “We used Ikea’s cheapest pillows,” says Dale. “They’re perfect because they’re lightweight and they have nice stitched edges. We steamed out the wrinkles and then just put them up with thumbtacks.” The light brackets are also from Ikea. The bedside table is a rice masher from a trip to Cambodia. 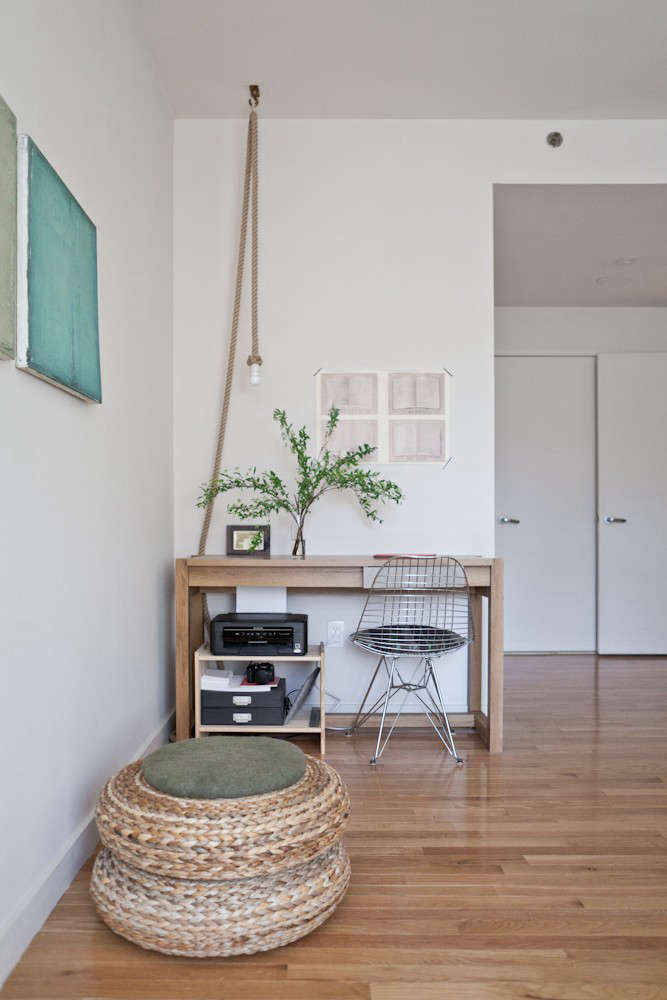 Above: Dutch designer Christien Meindertsma’s Flax Light hangs over a desk found on Wayfair. The stacked banana-fiber poufs are from Ikea. 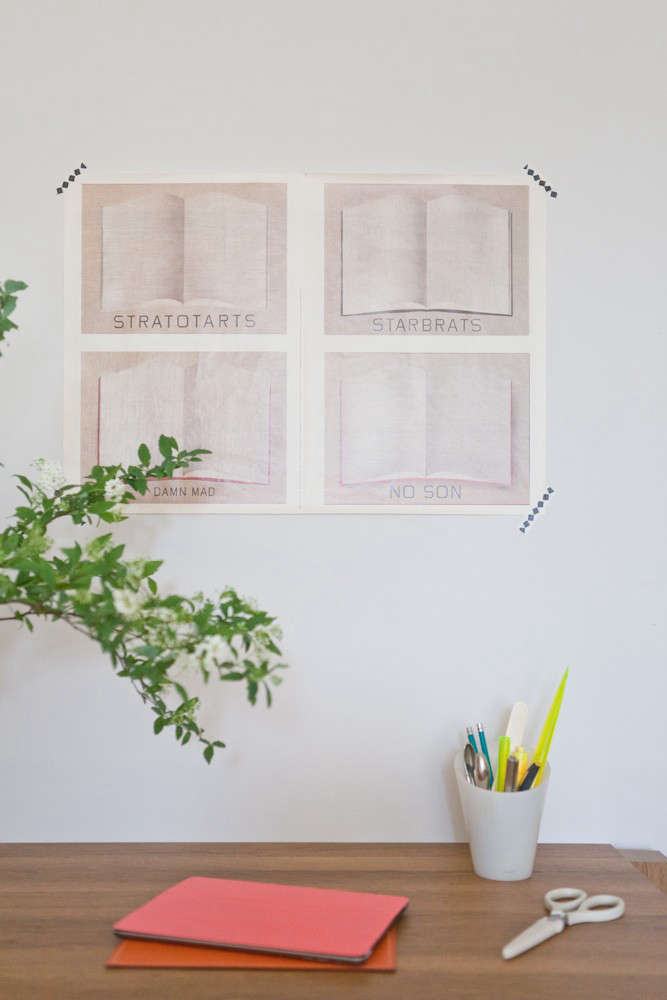 Above: An Ed Ruscha print–a Gagosian gallery giveaway–is taped over the desk. 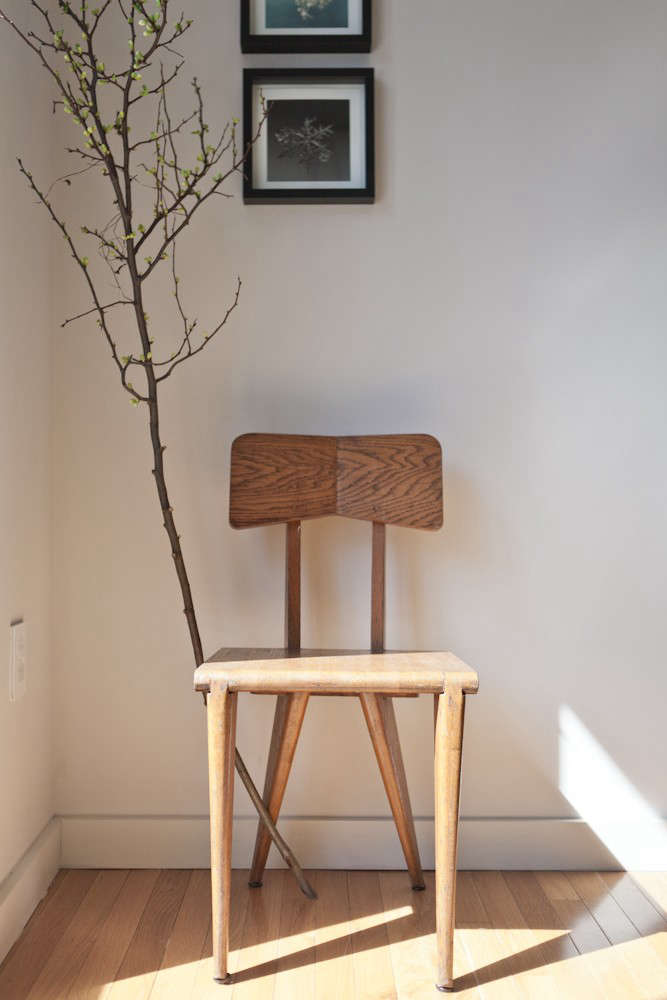 Above: An old school chair from Vermont and a quince branch. 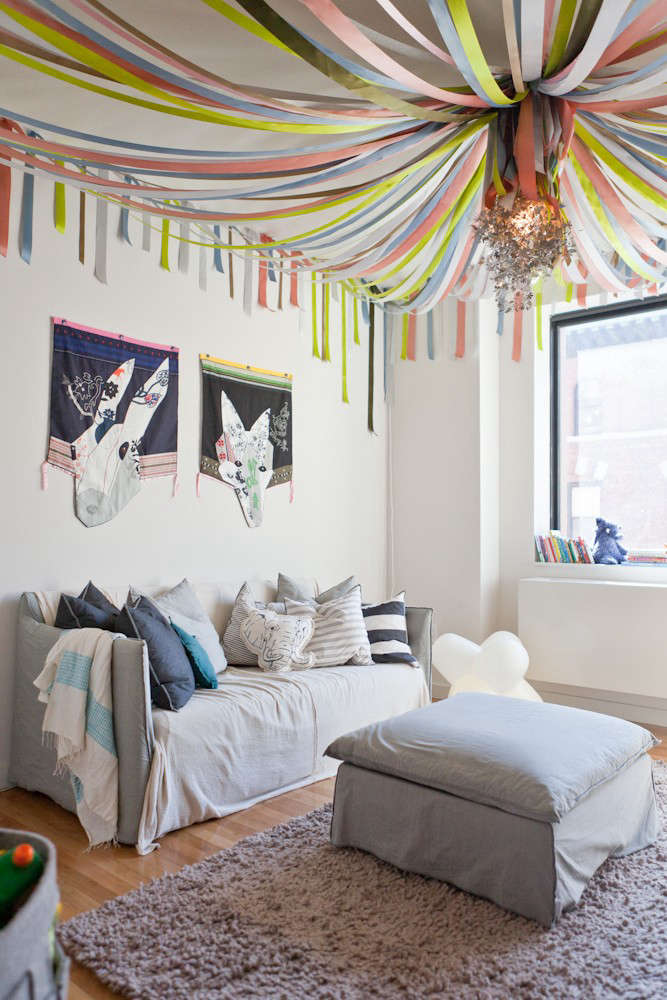 Above: Formerly featureless, Henry’s room is tented with double-faced satin ribbon and lit by Tord Boontje’s Garland Light. The animal flags on the walls are limited-edition designs by Hella Jongerius for Ikea. 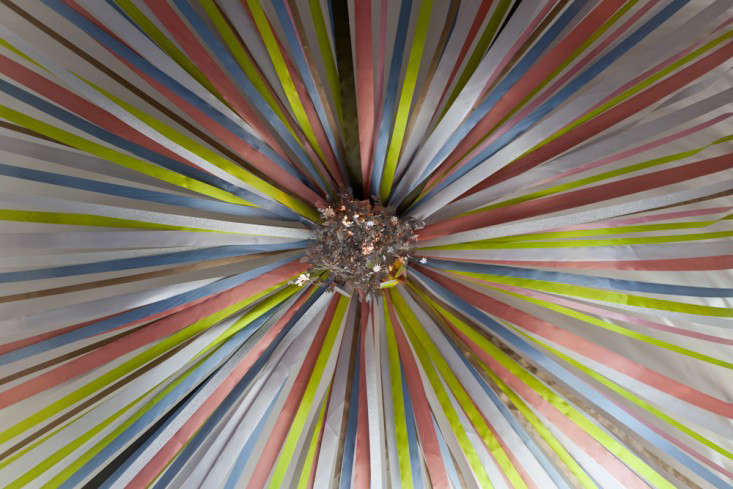 Above: “We stapled the ribbon to the corner where the wall meets the ceiling and then swagged it to the center,” says Dale. “The ribbon is tied to a three-inch metal hardware store ring that hangs in the middle.” 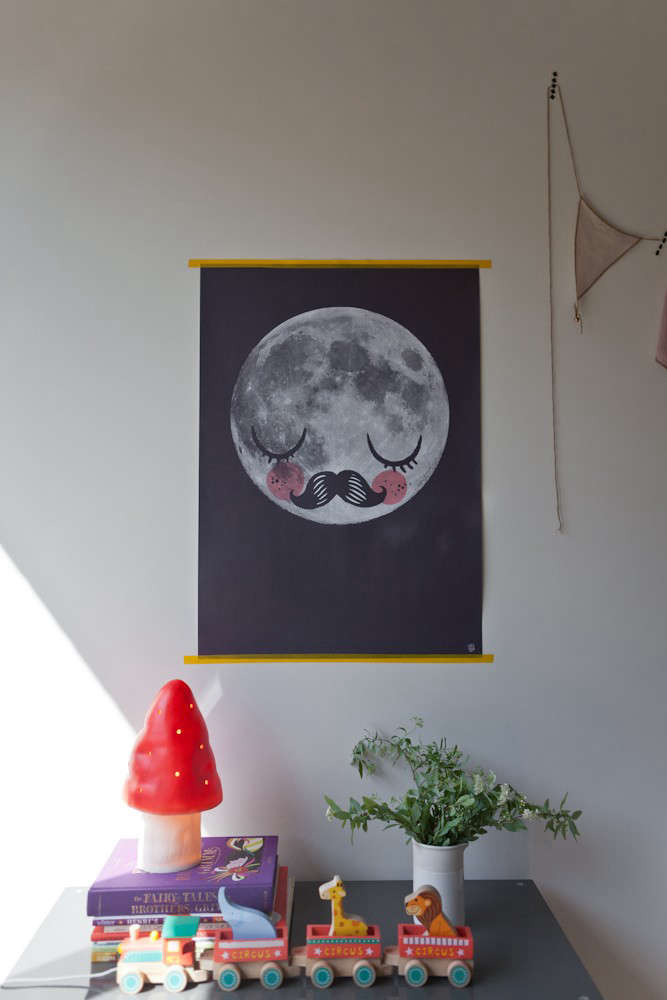 Above: A mushroom night-light and mustachioed moon print, both from Fawn Shoppe. 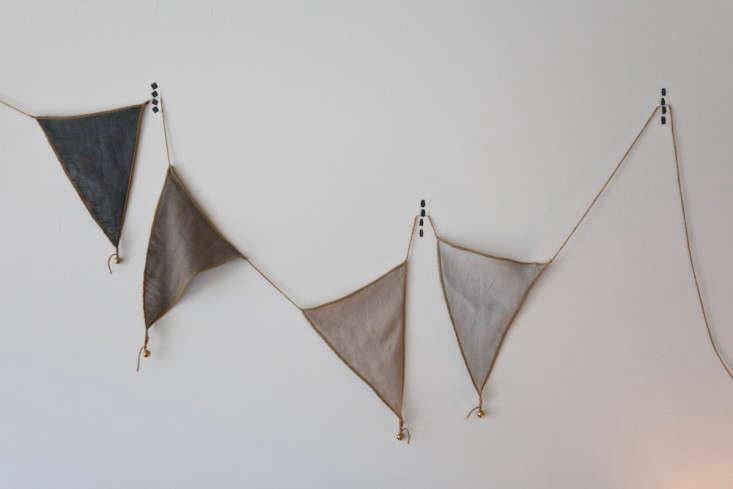 Above: A bell-tipped Garland from French website Smallable hangs over the crib. Like the print, it’s afixed to the wall with washi tape. (See more flags and bunting in our 10 Favorites roundup.) 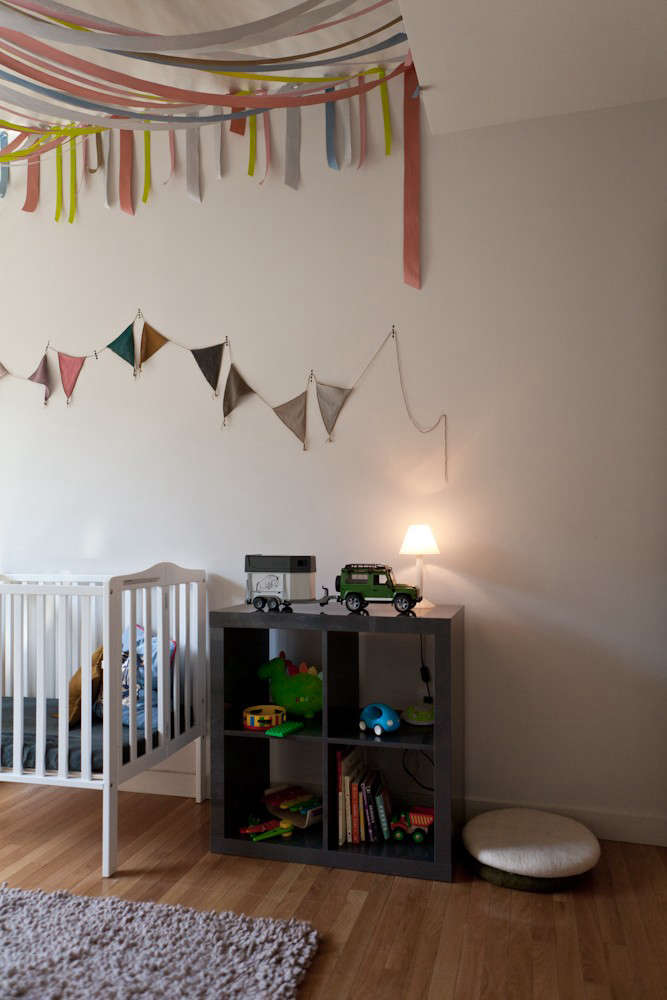 Above: The crib came from Bed, Bath & Beyond and was originally on wheels, so that in the family’s one-bedroom apartment it could be moved around. The Kallax Shelves are an Ikea classic. 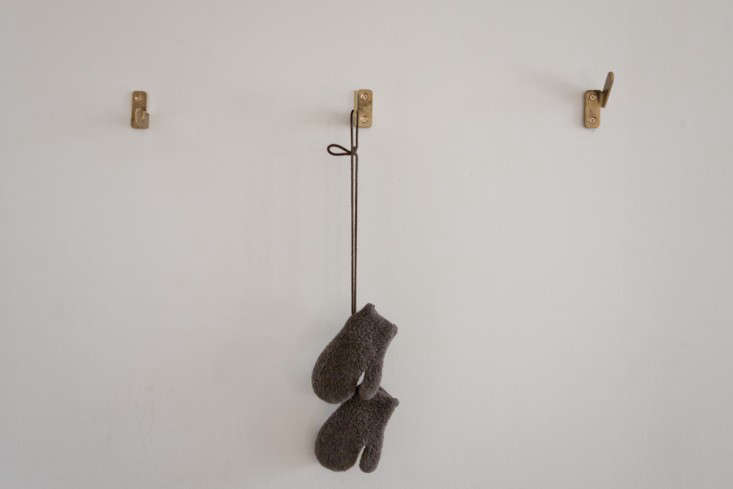 Above: The brass hangers in the entry to Henry’s room are Jon Harrison’s Kippford Hooks from Thorsten van Elten, and are modeled after ship fittings. See more of Dale Saylor and Joe Williamson’s work at Hollymount and on Instagram @hollymountltd.

A Minimalist Tropical Apartment for an Art Collector in São Paulo, Brazil

What’s Old Is New: A Pearl District Loft in Portland Gets a New Shell

A Room of One’s Own: An En Suite Retreat in Paris