Is there anyone immune to the charms of a few good nautical stripes? Crisp and classic, they assure that everything is in excellent form and good order. Inspired by a Pinterest image, Connecticut-based designer Hannah Childs decided a set of stripes on kitchen stairs would imply a tight running ship in a summer cottage she was renovating for a family of five. (See the full project in Before & After: A Summer Cottage Reborn on the Connecticut Coast.)

Enter Steve Dunn of PJ Cullina Contracting and his painter Joseph M. Palmieri, a specialist with over 20 years of experience and a passion for challenges. The big challenge here? Laying the stripes on stairs built in 1892 with treads of differing width from top to bottom, and four winders (triangular treads) that are not square.

“The layout of the stair stripe proved to be more difficult than we anticipated,” Dunn says. “To this day I will only walk on the outside of the lines for fear of scratching the paint. Probably not necessary as I have seen packs of children go up and down all summer long.”

For those who want to give this a go, Palmieri explains his process: 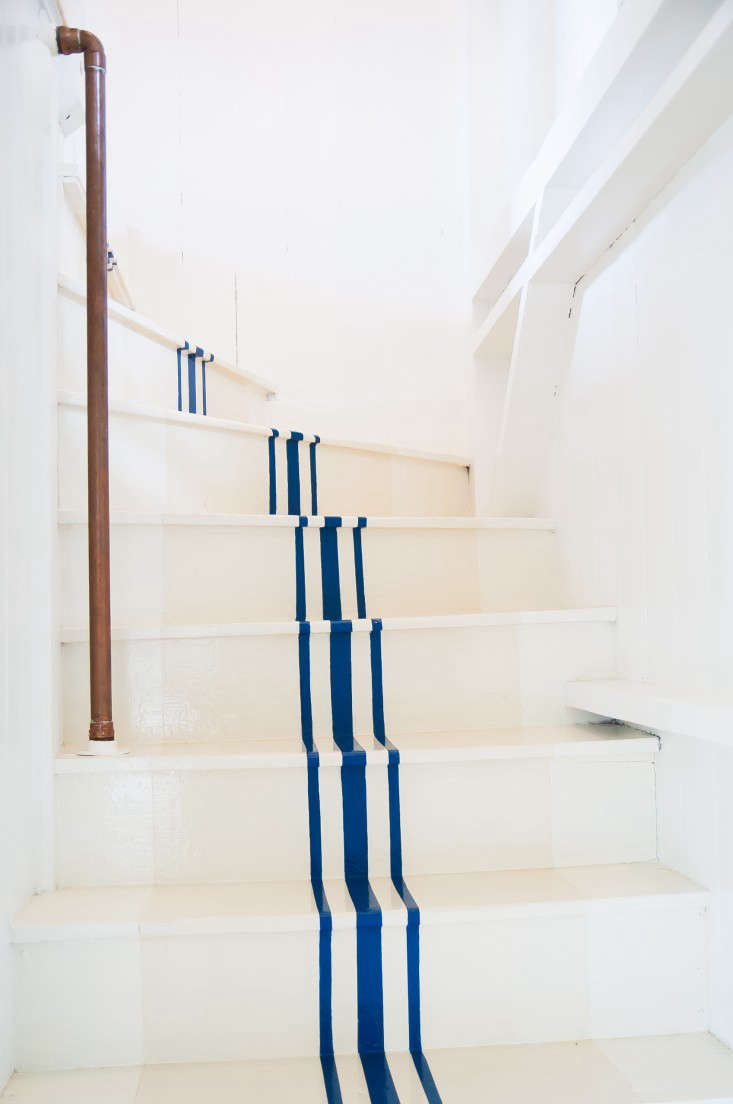 Above: “The first thing was to scrape and sand all surfaces of the stairs,” Palmieri says. “Then I started painting the edges of the stairs and risers about 8 inches in; they’re in Benjamin Moore Alkyd Porch and Floor Enamel (gloss) in White Dove.” 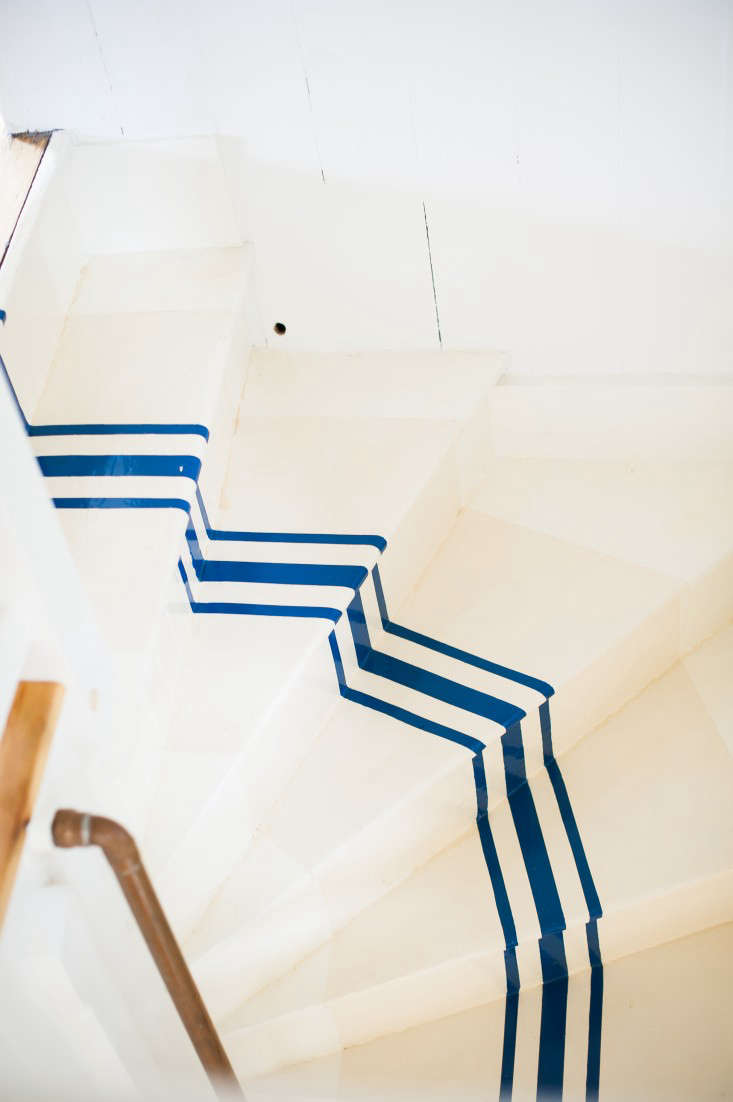 Above: “The second step was to tape off about 7 inches in from the edges for the center color [Benjamin Moore Bone White],” Palmieri says. “As the stairs widened, we had to compensate for the difference keeping the center Bone White color the same width. We painted the center color after the outside edge color dried.” 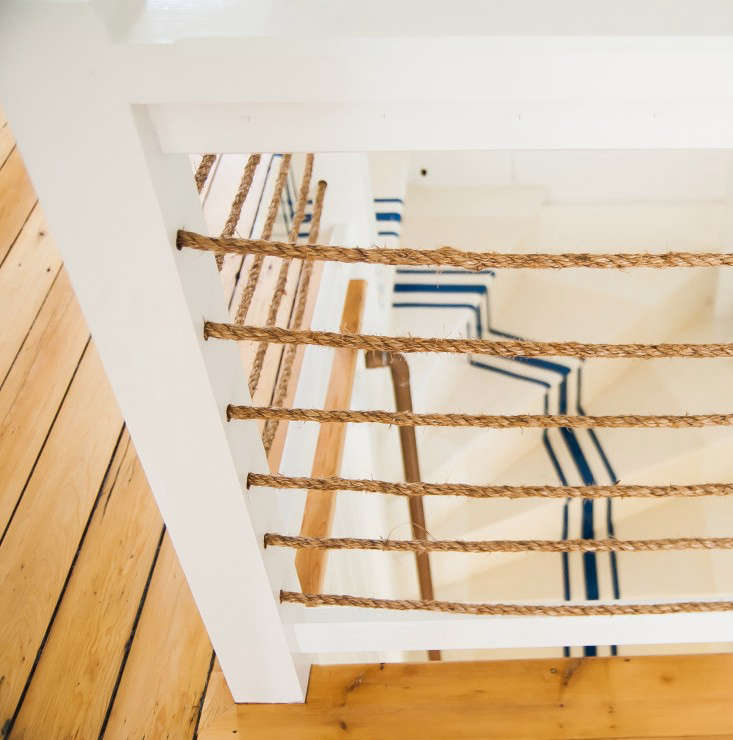 Above: “Taping for the blue stripes was difficult,” Palmieri says. “The turn of the stairs changed the width of the stripe and angling the tape became a problem.” Childs continued the nautical theme with rope railing. 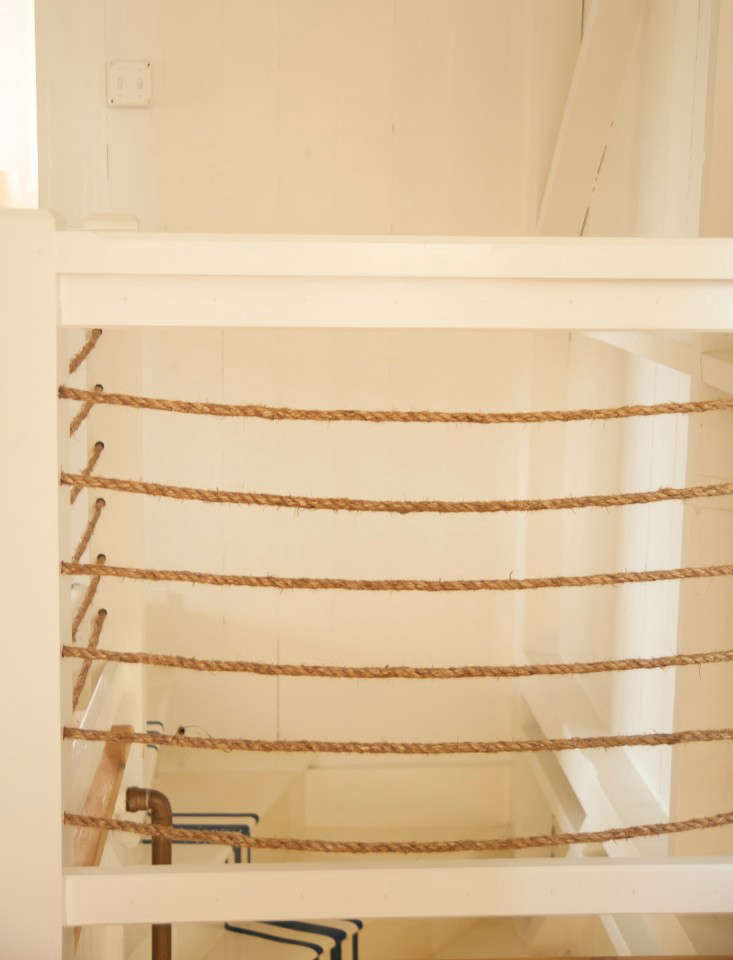 Above: “After two coats of the blue paint [Benjamin Moore Patriot Blue] were added and the tape was removed, there was a great deal of leaking and jagged edges,” Palmieri says. “I then proceeded to free hand the blue edges to clean up the lines, which is very time consuming. The final step was to paint the stairs with three coats of a clear high gloss, water based, wood floor polyurethane; this keeps everything from yellowing.” 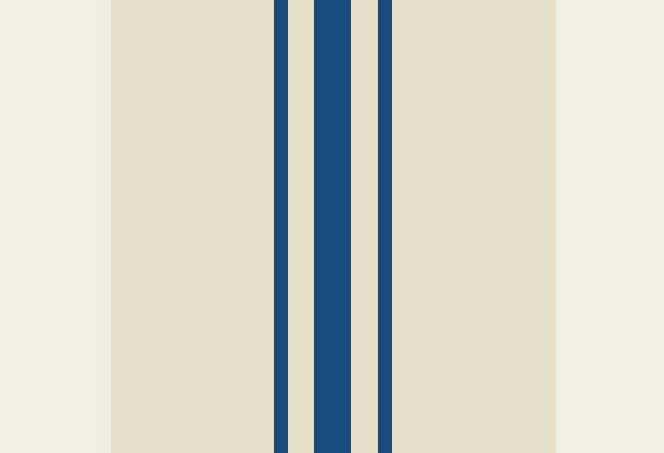 Above: Childs specified Benjamin Moore paint for all three colors; White Dove for the outside edges, Bone White for the center and Patriot Blue for the stripes. With all three colors, Palmierei used Benjamin Moore Alkyd Porch and Floor Enamel followed by three coats of a clear high-gloss, water-based wood floor polyurethane. To mark the guidelines for the stripes, he used Frog Tape.

Below: See Palmieri in action as he paints the stripes on the stairs. Video by PJ Contracting.

The Modern Menorah and Other Uncommonly Chic Judaica from Via Maris