It’s not often that a kitchen renovation is designed around the often ignored hood vent, but when Bunker Workshop’s Chris Greenawalt learned that his clients would “do whatever it took to have proper hood ventilation,” he decided it was time to embrace it.

When they purchased their family home in Boston’s Beacon Hill, Greenawalt’s clients were determined to reinject an identity into the house after a series of transformations (it had gone from a single residence to a multi-family and then back again). With cooking and entertaining high on their list of priorities, the couple’s design focus soon centered on the kitchen and dining area. An existing bathroom between the kitchen and dining room was moved, allowing for the creation of a major space in which the hood vent and island below it have become the main event of the house. 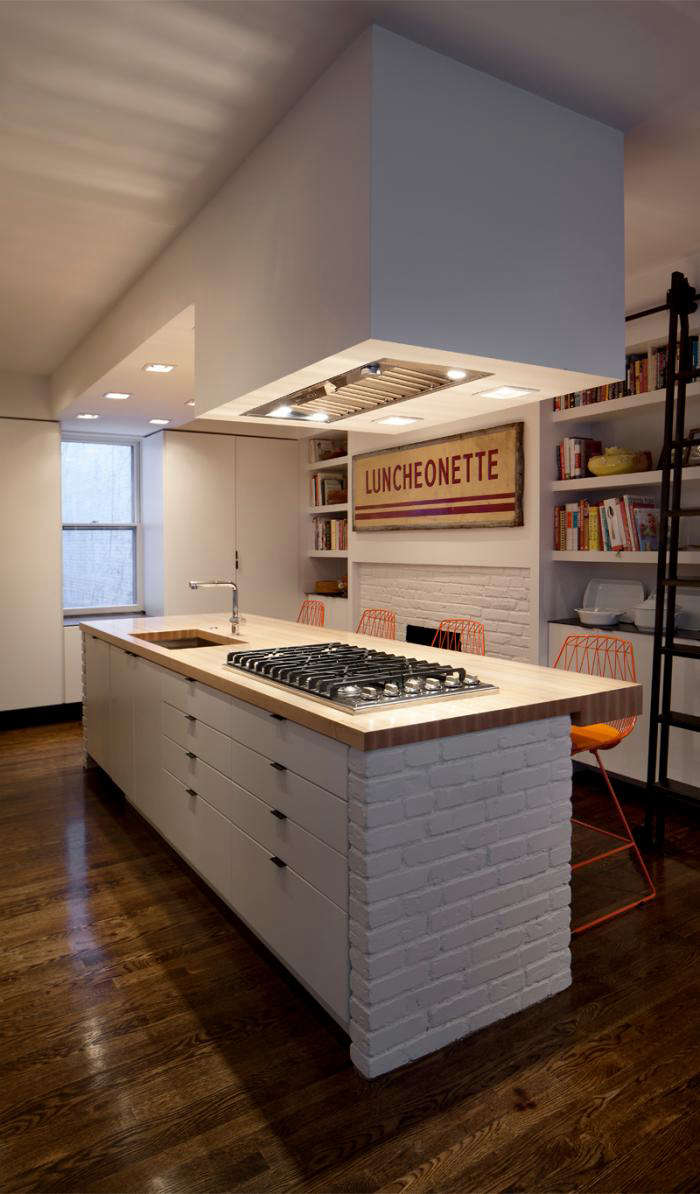 Above: A canopy and soffit have been built out from the window to create the architecture for the hood vent over the island. Open shelving for books and pottery line the back wall. The existing oak floors were stained a dark brown to contrast with the maple wood on the island. 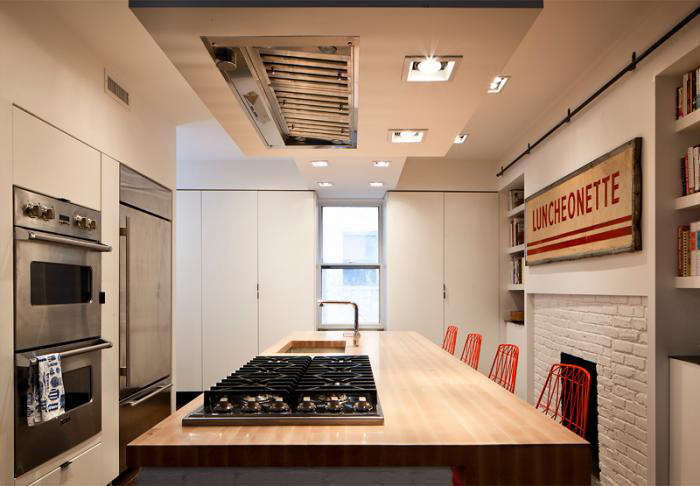 Above: “The client wanted an eat-in kitchen with a lot of storage for small appliances and open shelving for books,” Greenawalt says. A large refrigerator, gas cook top, and a double oven all face the island, while a series of floor to ceiling cabinets along the north window wall provide the majority of the kitchen storage. 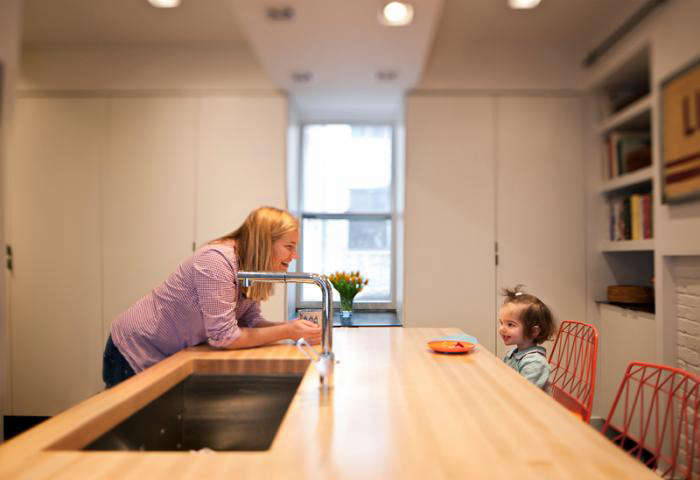 Above: Everything, especially family life, is now centered around the kitchen island and vent hood above. 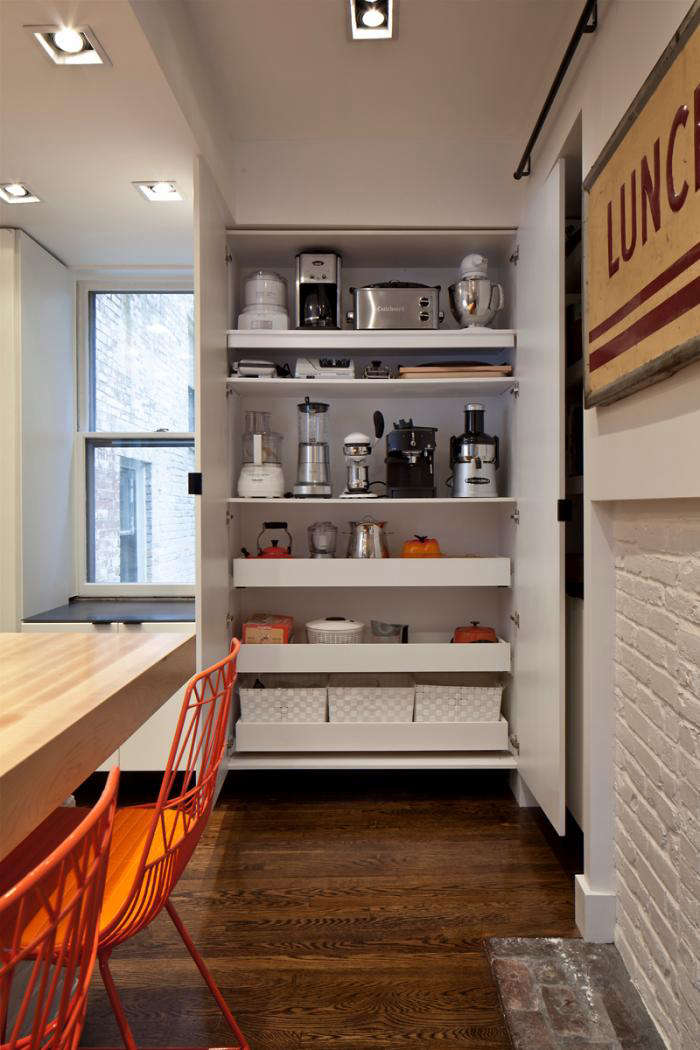 Above: Small appliances are easily accessible in a floor-to-ceiling storage cabinet. 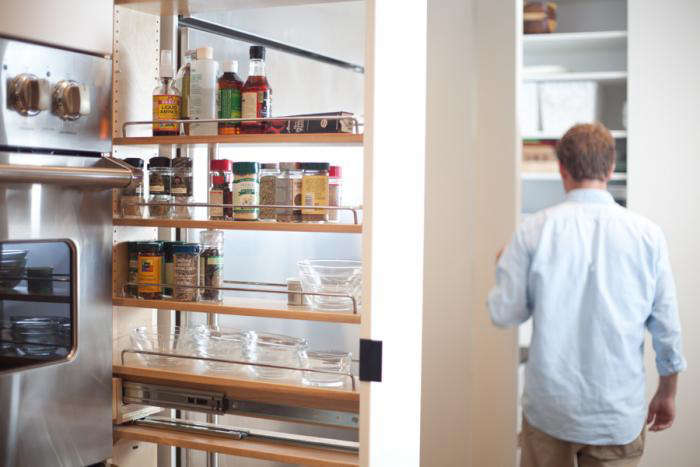 Above: “The client uses a lot of spices in her cooking and wanted an easy pull-out spice storage solution,’ says Greenawalt. 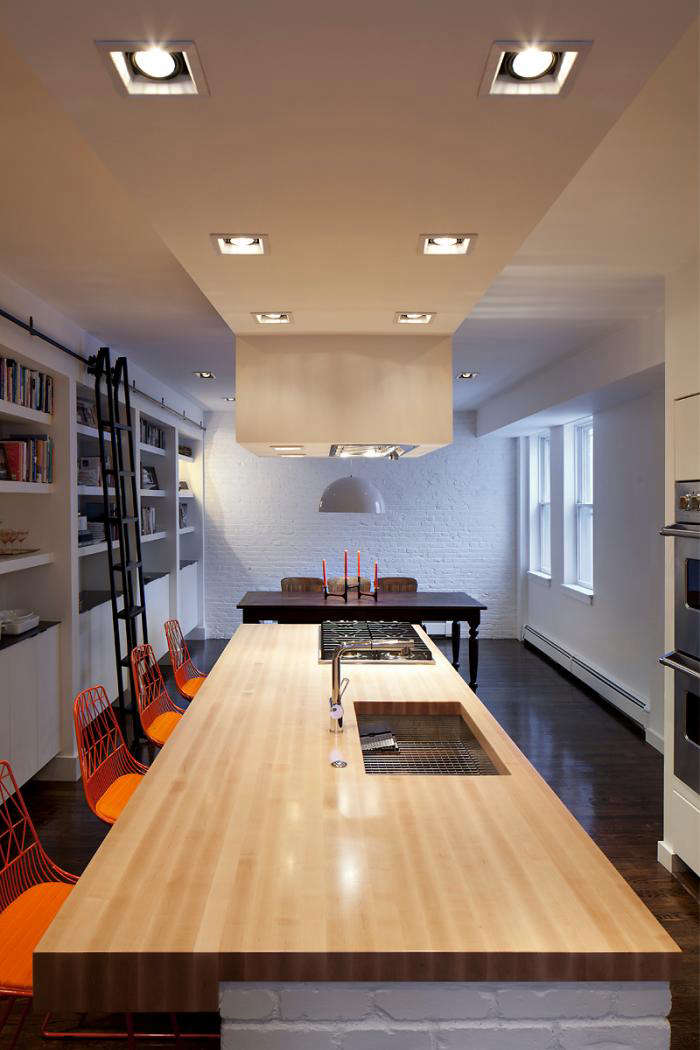 Above: “The client was adamant that there be plenty of lighting for the kitchen area,” Greenawalt says. “We settled on the Eurofase square recessed adjustable multi-lights for the ceiling and the single recessed option in the canopy.” The design team selected fireplace brick (painted white) to match the back wall. 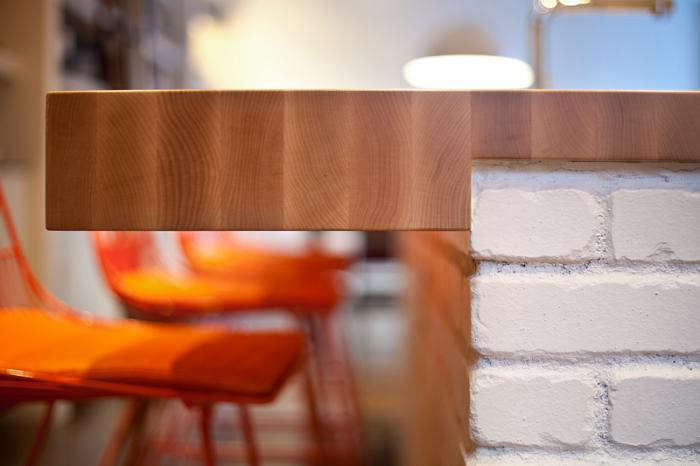 Above: Greenwalt’s first drawings showed a stainless steel counter top. The clients, however, wanted a warmer material, but were concerned that wood would not be durable enough for their family. Grothouse Lumber Company sent them large samples for testing. Impressed with what they say, they decided on a 2-inch edge-grained hard maple with a clear matte durata finish. “We added a 4-inch thick cantilever to the eat-in area and matched the fireplace brick for the island walls to add a bit more warmth and texture to the scheme,” Greenawalt says. 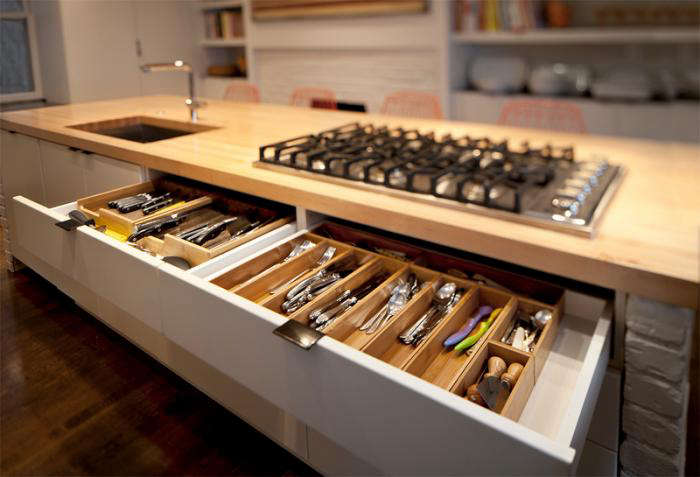 Above: A busy cook likes to have utensils on hand. 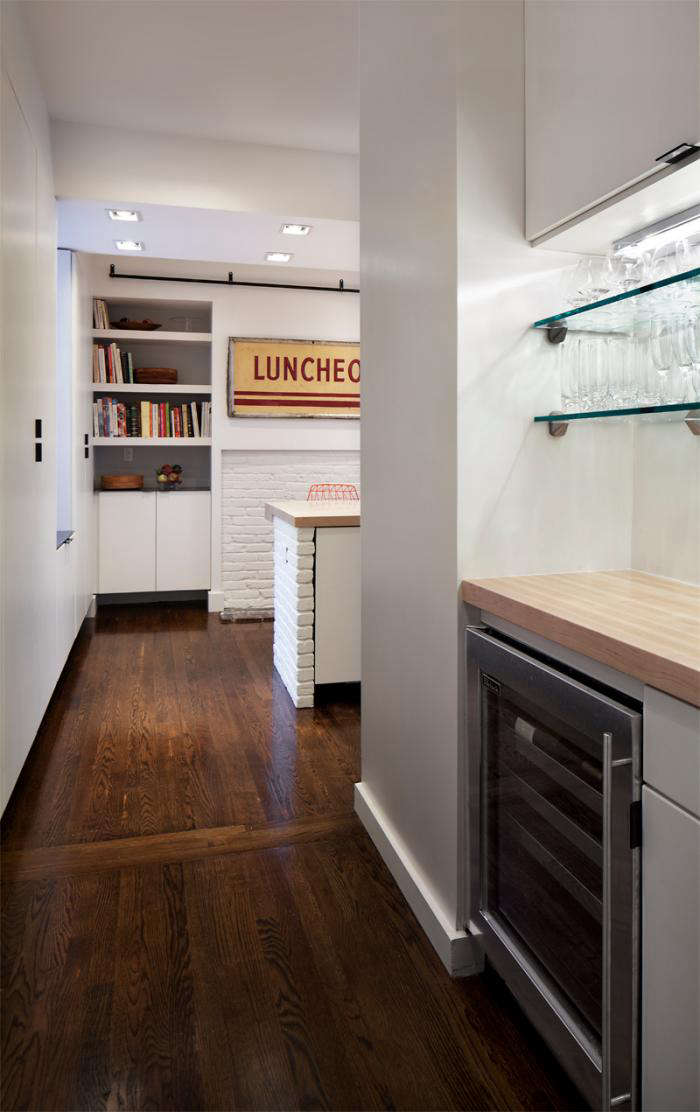 Above: A bar area was created in the passage to the living room. The bathroom, which was previously located between the kitchen and dining area, has been moved to this passage. 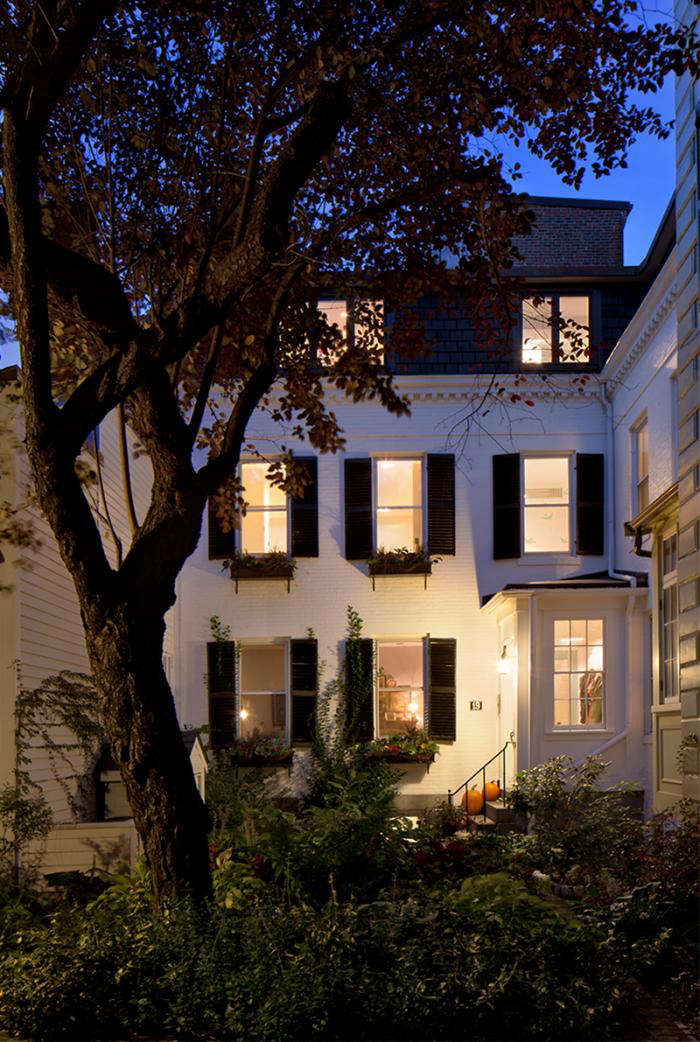 Above: The townhouse in the historic neighborhood of Boston’s Beacon Hill. 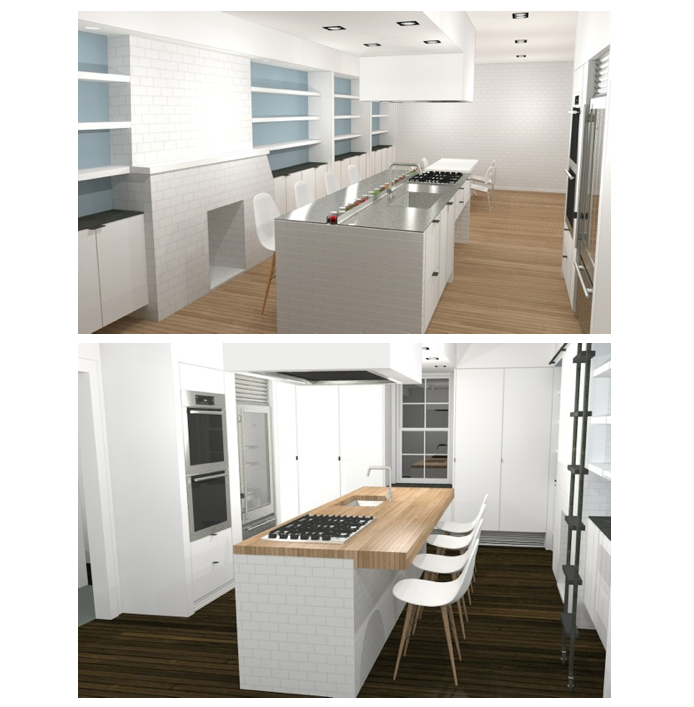 Above: Greenawalt’s renderings helped the clients decide materials and finishes. 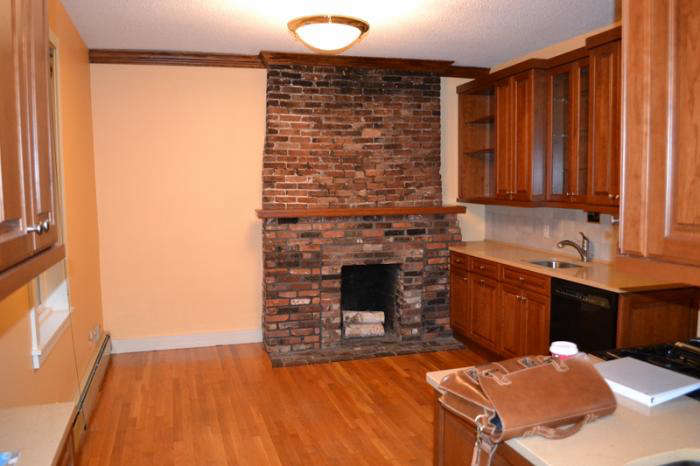 Above: A view of the existing kitchen before the wall on the right was removed. 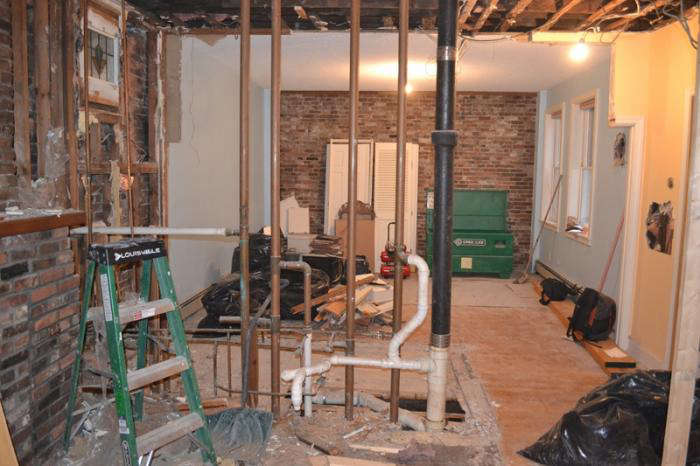 Above: A view through to the space that was previously the dining room, after the walls and bathroom have been removed. 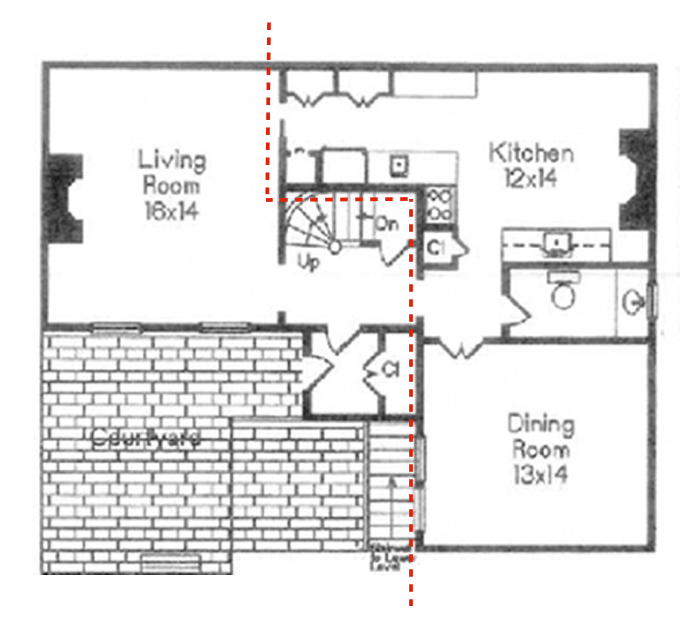 Above: A diagrammatic plan showing the kitchen and dining room, which became the main focus of Greenawalt’s work in the transformation of the house. 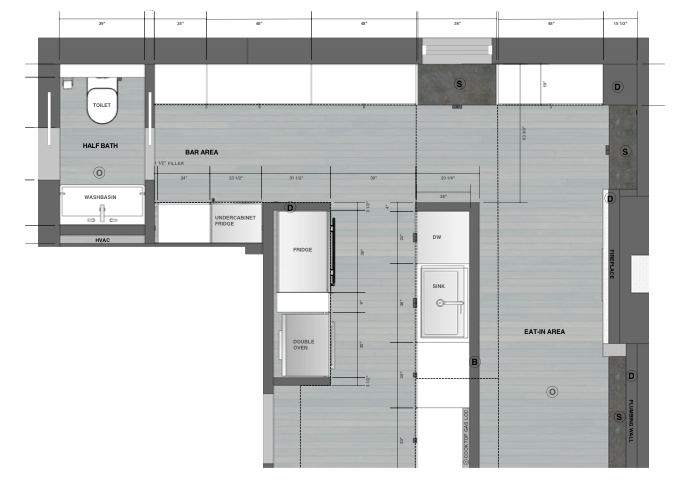 Above: The new plan of the kitchen showing the new position of the bathroom by the bar area. Sliding pocket doors allow access to the living room beyond.

N.B.: The Bunker Workshop are skilled at working out their clients’ needs. See Small Space Living for the In-Laws to see their design solutions for a downsizing couple.