Classical pianist Lara Downes and evolutionary biologist Rick Grosberg approached the renovation and expansion of their circa-1962 kitchen in Davis, California with a mutual desire to reimagine past works in contemporary ways. "The main inspiration for the kitchen, with its mix of old and new, and focus on salvaged and repurposed materials, is very much connected with our wider interests," says Downes.

The couple began the overhaul in September, 2010 and completed it in December of the same year, nearly doubling the size of the original space. Staying true to their ethos and budget, they created a light-filled, open kitchen that incorporates many of their previously owned appliances, numerous Etsy and Ebay finds, and locally purchased vintage items. Downes describes the entire endeavor as something of which they are truly proud, one that "really changed our home and family life for the better."

"After" photos by Rik Keller Photography. 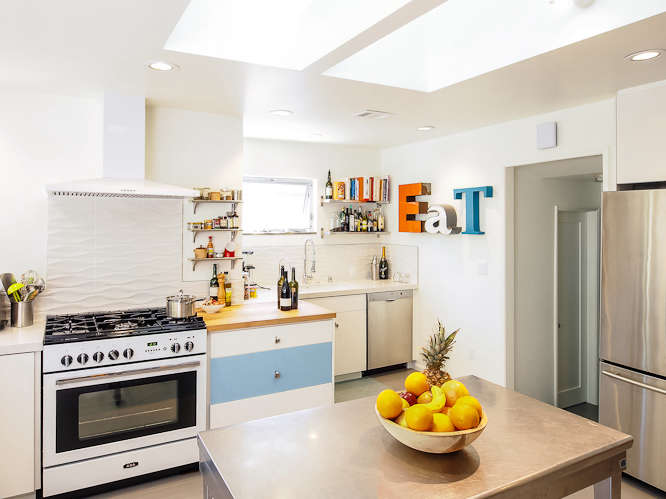 Above: The couple wanted a bright and fresh area for cooking and had originally planned on adding one large skylight; for budgetary reasons, they opted for two instead. "We discovered that we liked the idea of breaking up the big light well," says Grosberg. They installed two standard Velux lights, one operable, the other fixed, to reap the benefits of ventilation during cooler summer nights. This option meant that standard-sized skylights could be used, ultimately saving the couple more than $10,000. 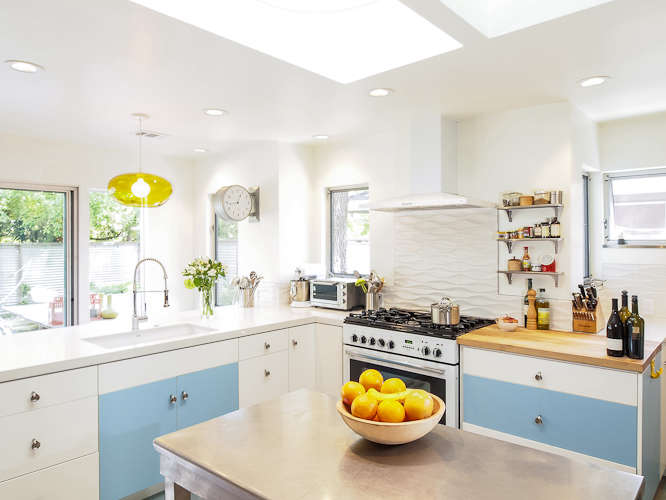 Above: The couple transformed the entire area into a communal place for their family of four to cook, eat, and gather. The white walls, light-colored accessories, and open glass doors create a seamless transition from indoors to out. 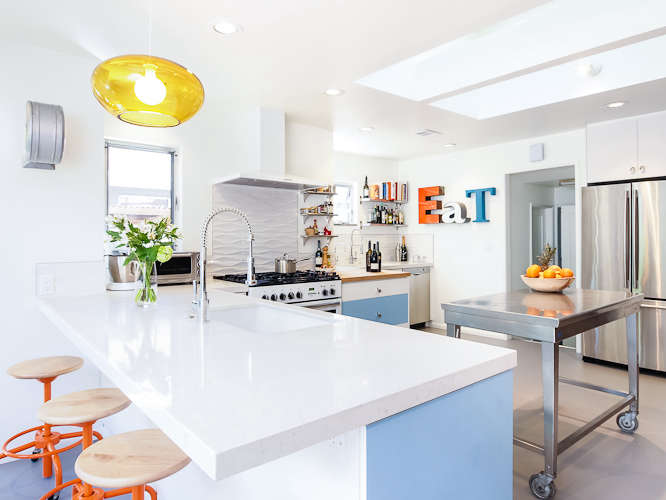 Above: The kitchen is filled with an eclectic mix of discovered pieces. The island is a large stainless steel cart salvaged from a school's laboratory; the orange counter stools are also from an old lab and were re-painted at a local auto body shop. The yellow pendant is a vintage score from eBay and the "EAT" letters came from Etsy and Craigslist. "Lara and I did all the treasure hunting," says Grosberg. "It was a blast." From this angle, the Bosch dishwasher (Left) and LG French-door refrigerator (Right) are in plain view; both appliances were holdovers from the former kitchen. 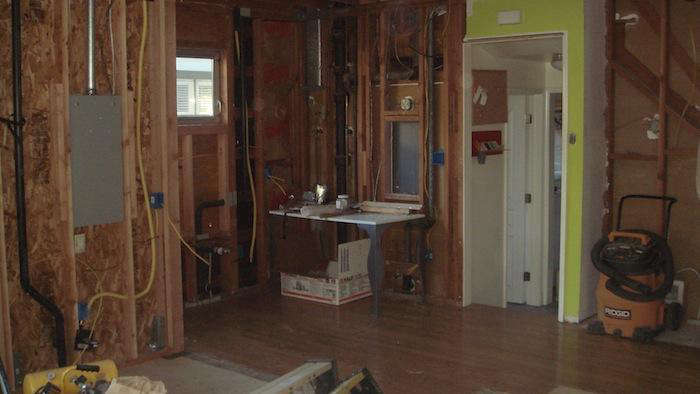 Above: The far corner offered space for a second sink. Before the skylights were installed, the space had minimal natural daylight. 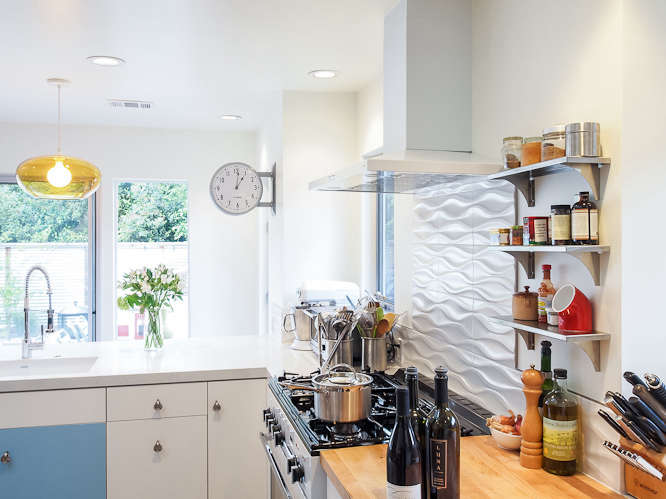 Above: Strategically placed open shelving offers quick access for cooking essentials; the range is an Aga 36-inch Pro. The couple had the blue and white cabinets custom made (more affordable than reusing their Ikea carcasses and faces) and sourced the pulls from Liz's Antique Hardware in Los Angeles. 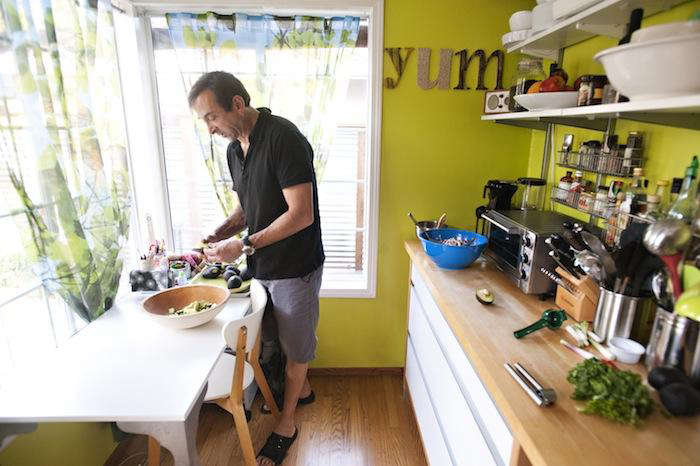 Above: Grosberg in the former kitchen, which measured approximately 7 by 15 feet. 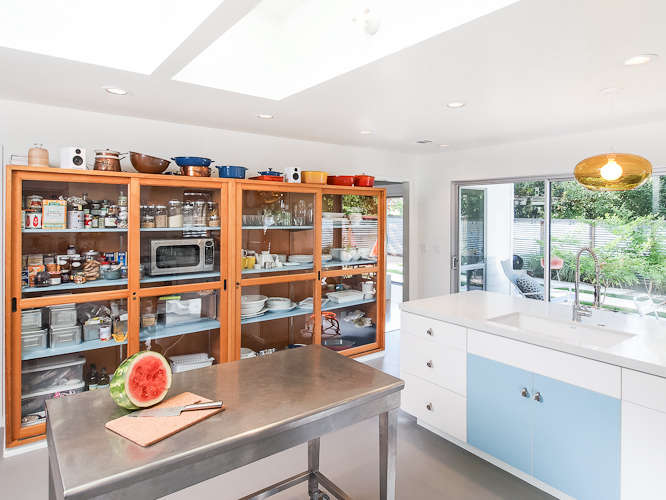 Above: The microwave, pantry items, serving dishes, and accessories are organized and accessible in the large, glass front cabinet shelves (another find from an old lab). The perspective from the island is expansive, with views to the outdoors. 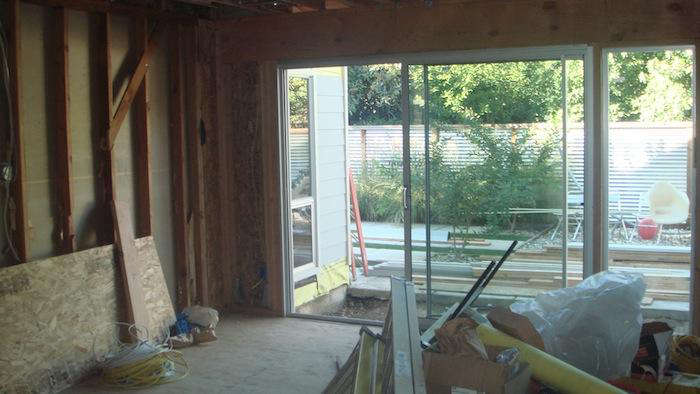 Above: A view of the back outdoor space, as seen when construction was underway.

(N.B. We're inspired by how Downes and Grosberg worked many reclaimed and vintage items into their overhauled room. For more ideas for mixing old with new, see more than 20 images of kitchens with antiques in our Room Gallery.