All our friends in LA’s Echo Park are abuzz about their new favorite hangout, Ostrich Farm, chef Jaime Turrey’s restaurant debut (he formerly manned the popular Monsieur Egg pushcart). Turrey specializes in cooking over a live fire, and his results have been earning rave reviews, but what grabbed our attention is his wife Brooke Fruchtman’s homemade dining room design.

Photography by Bri Emery of DesignLoveFest, unless otherwise noted. 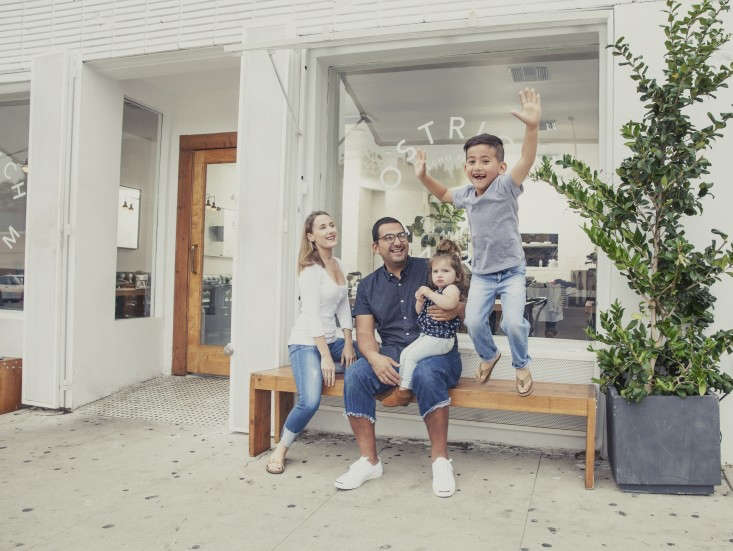 Above: “We were looking for a space for many years–even, I think, before we really took the idea of opening our own restaurant seriously,” says Brooke, shown here, with Jaime (the two met when she sold him a pair of boxing gloves at a yard sale in SF) and their kids. Brooke left her longstanding job as an associate vice president at LACMA to design the restaurant and run the front of the house. Located on West Sunset, Ostrich Farm is named for a railway that once ran down the boulevard. Photograph by Sally Peterson. 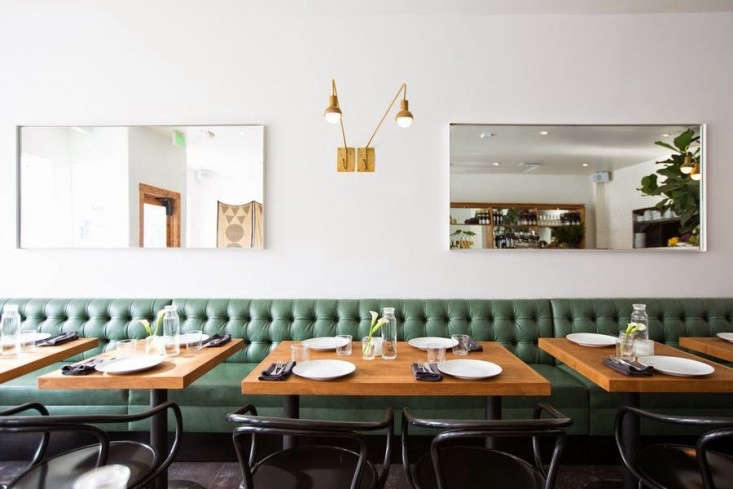 Above: The restaurant occupies a long-vacant space formerly occupied by a pupuseria: “It was painted many, many shades of purple with an abandoned lot in back, windows that had been covered up, and a disco ball dangling from the ceiling. I actually regret not keeping that disco ball,” says Brooke.

Envisioning a bright neighborhood restaurant, “something cool and casual,” she turned to friends who own fabrication studio/vintage house Style de Vie for the custom work, including the tufted banquettes and wood-topped tables. “It was so comforting to have a team we trusted because this process was totally new to us and we were working on an extremely tight budget.” Photograph by Elizabeth Daniels. 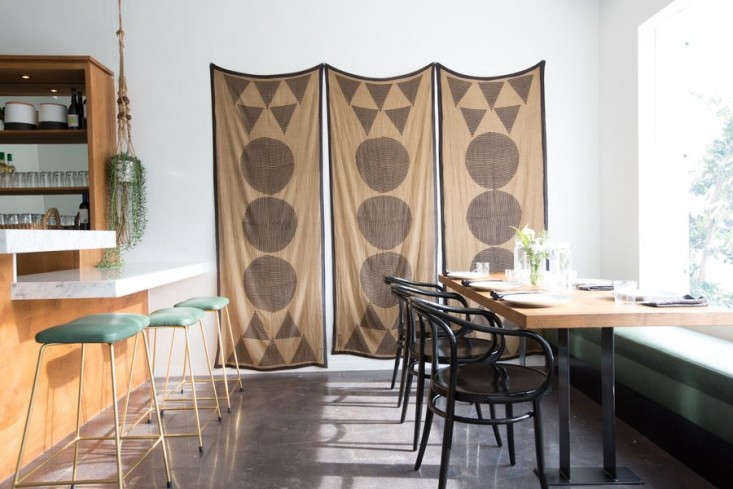 Above: The bar stools and marble bar are also the work of Style de Vie. The Thonet Era Armchairs are from DWR: “I’m obsessed with rounded back chairs,” says Brooke. “Even though these are so wide we probably sacrificed a seat or two in an already small space, it was worth it. In fact, I love them so much, I bought them in white for our house. I think they’re a great deal.”

As for the wall hangings, they’re Indian block-printed cotton scarves by Remodelista favorite Block Shop (see Lily and Hopie Stockman’s Wearable Paintings). Brooke says she extemporaneously tacked them up the day Ostrich Farm debuted “and now cannot imagine our space without them.” Photograph by Elizabeth Daniels. 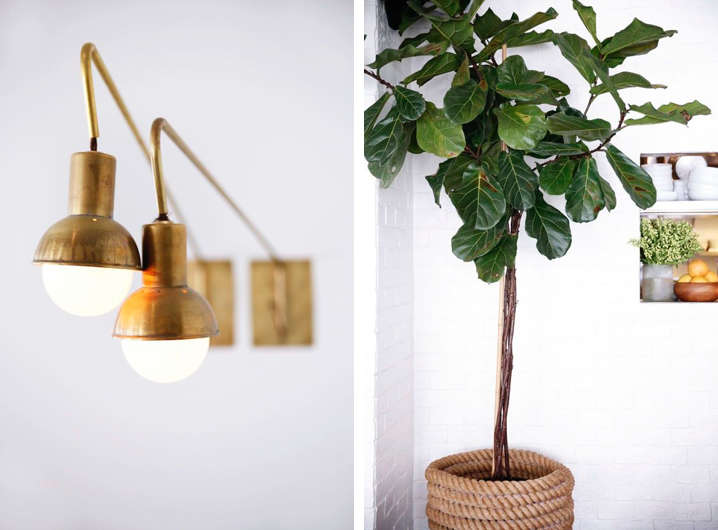 Above L: The restaurant’s lights are the work of Doug Newton of Nightwood in New York: “I was searching for an embarrassingly long time for the perfect brass sconces that have a handmade quality,” says Brooke. Above R: The restaurant’s Fiddle Leaf has a snake-charmer-style DIY coiled rope container: “It’s just a lot of rope hot glued together.” (Learn all about the Fiddle Leaf Fig at Gardenista.) 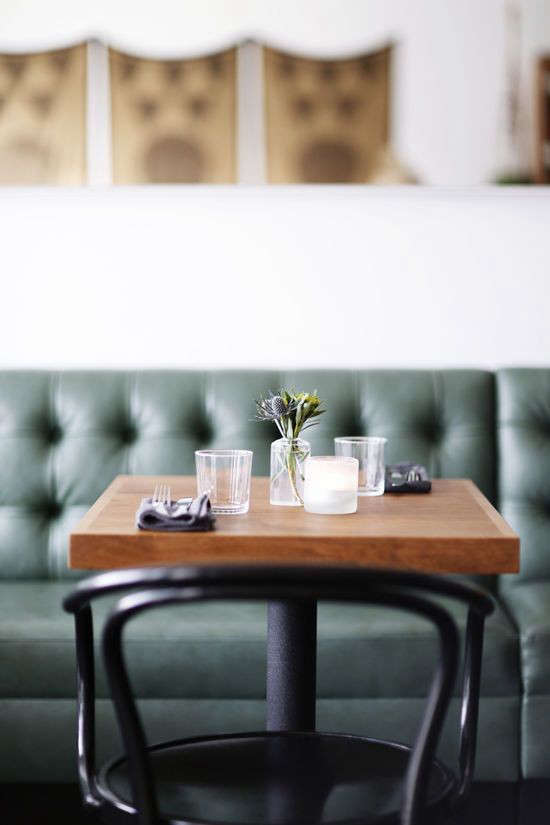 Above: The tables have a soft wax finish and are set with simple glassware (which the couple sourced on Remodelista). For similar tumblers, see 10 Easy Pieces: Basic Drinking Glasses. 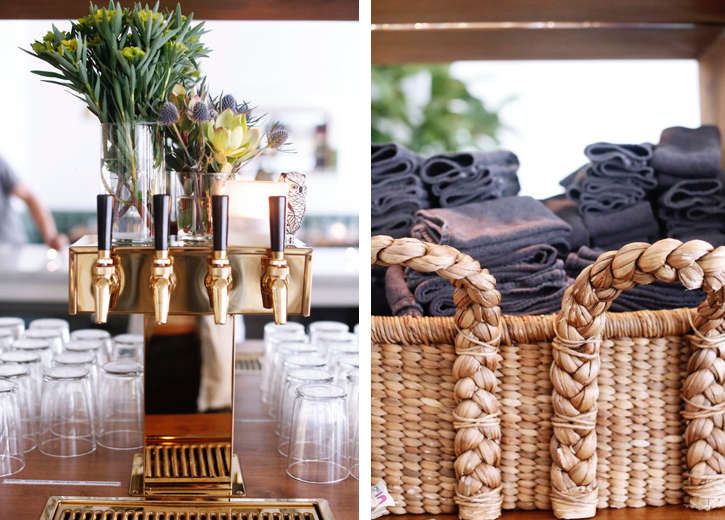 Above L: “Our stemless wine glasses evoke the casual vibe we’re going for,” says Brooke. Above R: The heavy linen napkins–all 300 of them–were stitched by the family’s nanny. 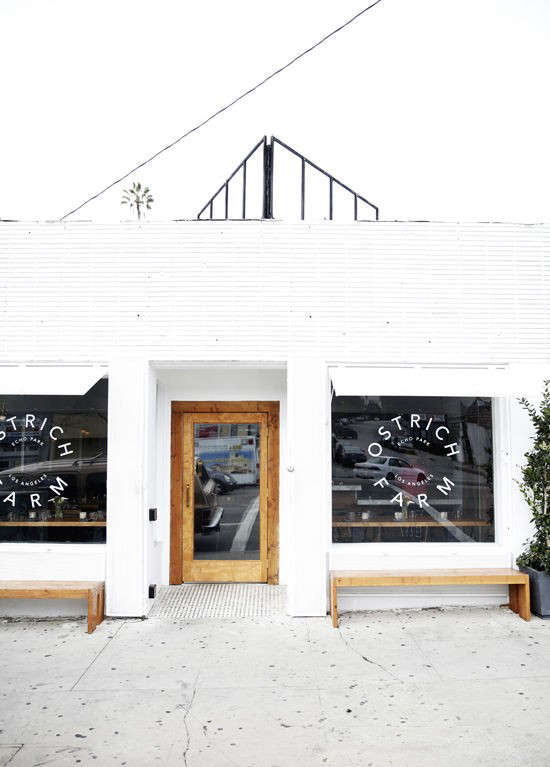 Above: Ostrich Farm is at 1525 W. Sunset Blvd in Echo Park, LA. See more at @ostrichfarmla on Instagram.

Check out more local favorites in our LA City Guide, including the Covell Hotel and LA’s Best Source for 20th-Century Antiques.

And take a look at An LA Cliffhanger, a house owned by Cleo and McShane Murnane of Project M+ design, who are Ostrich Farm regulars.

In collaboration with: Editors' Picks: Best of the ABC Carpet & Home Summer Sale