A terraced house in St. Vincent Place in Melbourne, borne of the discovery of gold in 19th century Victoria and modeled after London’s terraces, is now home to a 21st century family with global instincts of its own.

Meet Stephen O’Connor and Annick Houle, the husband and wife principals of Melbourne-based architecture firm O’Connor Houle: She’s French Canadian, he’s Australian; they met in architecture school at Harvard, have lived in New York and London, and love everything Japanese. In the full renovation of their own Victorian terraced house, located in St. Vincent Place, Albert Park, an inner city suburb of Melbourne, they bring together their collective experiences from around the world to create a rich multi-layered home in which to raise their family. “With all our projects, we aim to tailor-make spaces that are experienced as well as seen; environments that stimulate the senses and promote a sense of well-being while ultimately speaking of our culture,” Houle says. 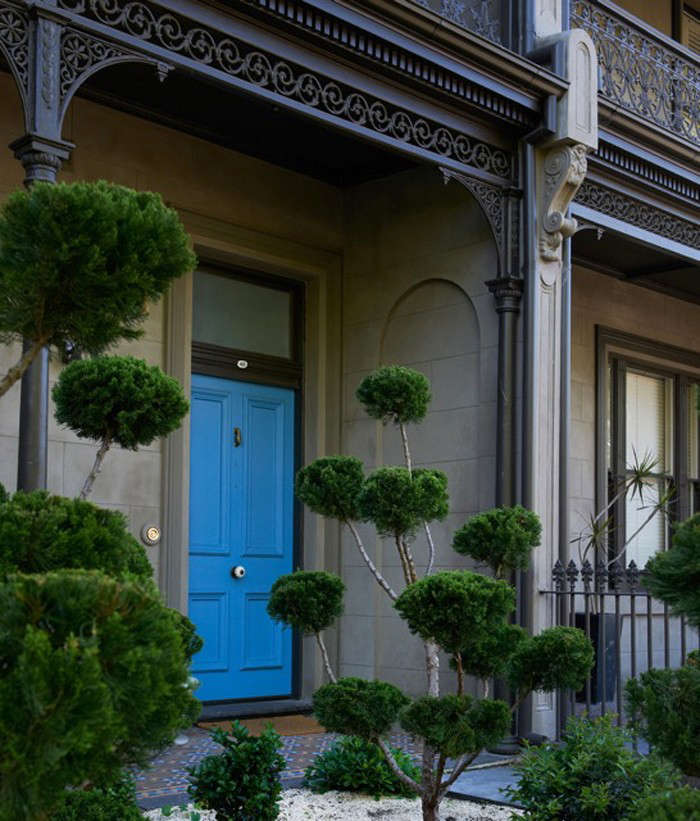 Above: The architects’ Victorian terraced house is in St. Vincent Place, a residential square with national cultural significance (it’s considered the best example in Australia). The veranda is a typical detail of Victorian terraces in Melbourne. 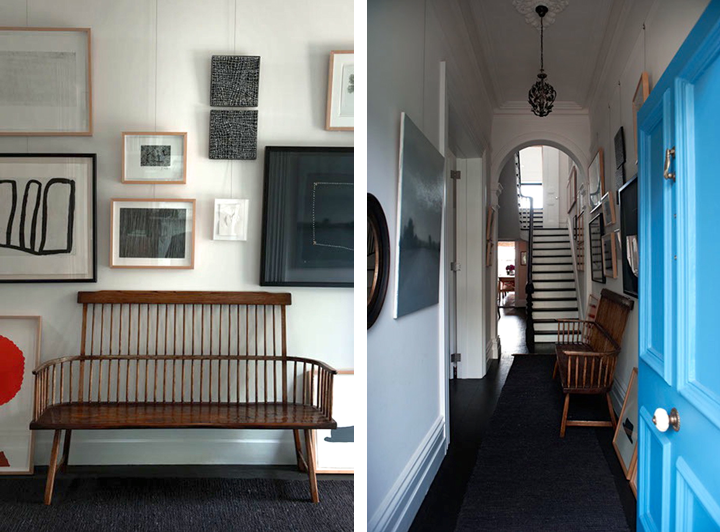 Above: A view into the front hall shows the beginnings of the architects’ modern art collection from around the world. The bench is custom made by Australian furniture maker Greg Stirling and is based on Stick Back Chairs. 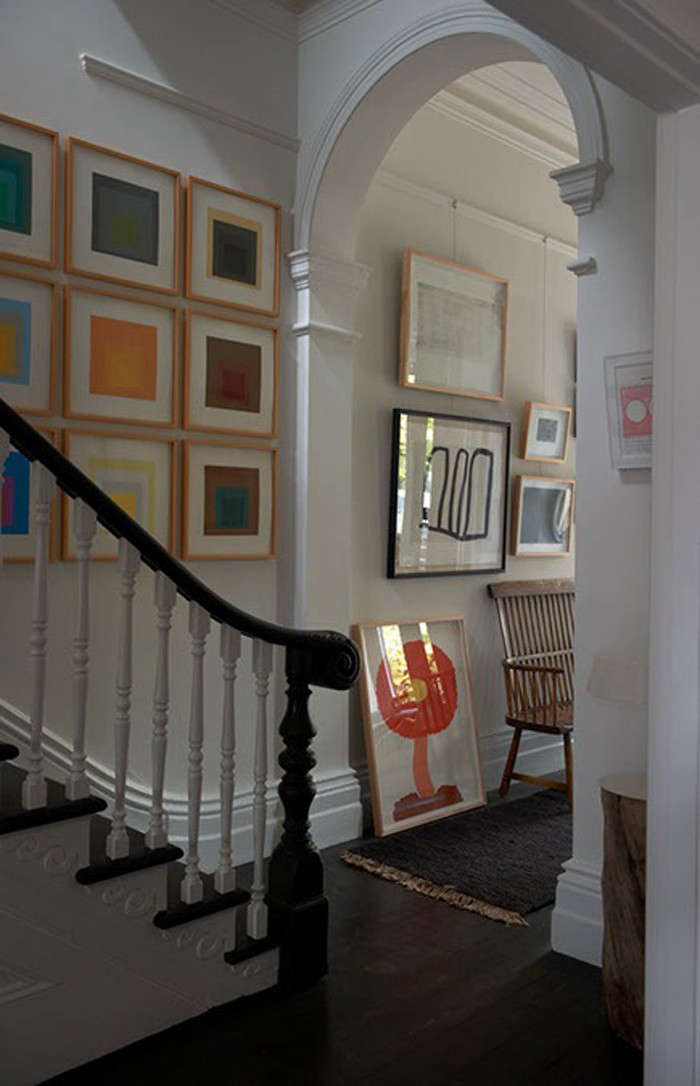 Above: Modern art complements the original Victorian details on the stairs. 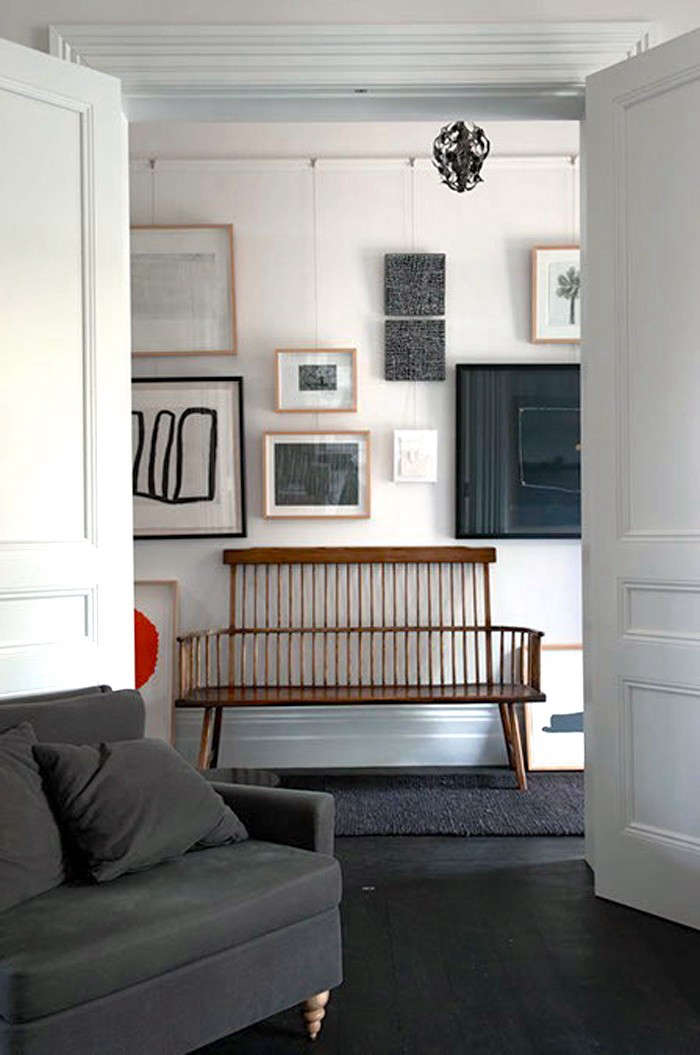 Above: The architects make use of the Victorian picture rail and wires to hang their modern collection. 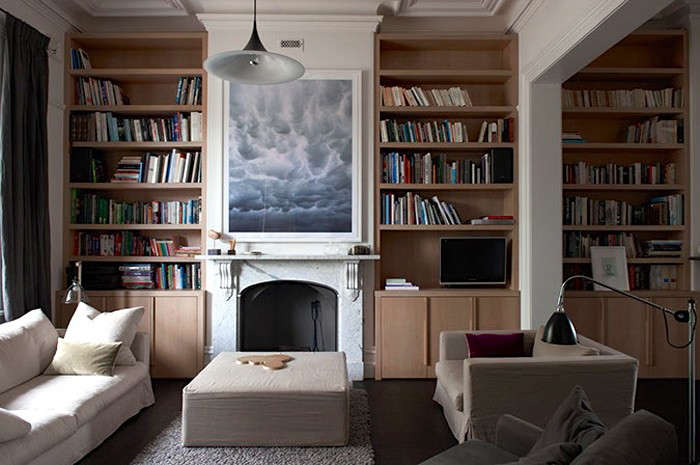 Above: Removing the wall between the living room and dining room creates one large living area. The architects then installed a series of custom design oak bookshelves that runs the length of the two rooms, further unifying the two spaces and providing storage for their extensive book collection. 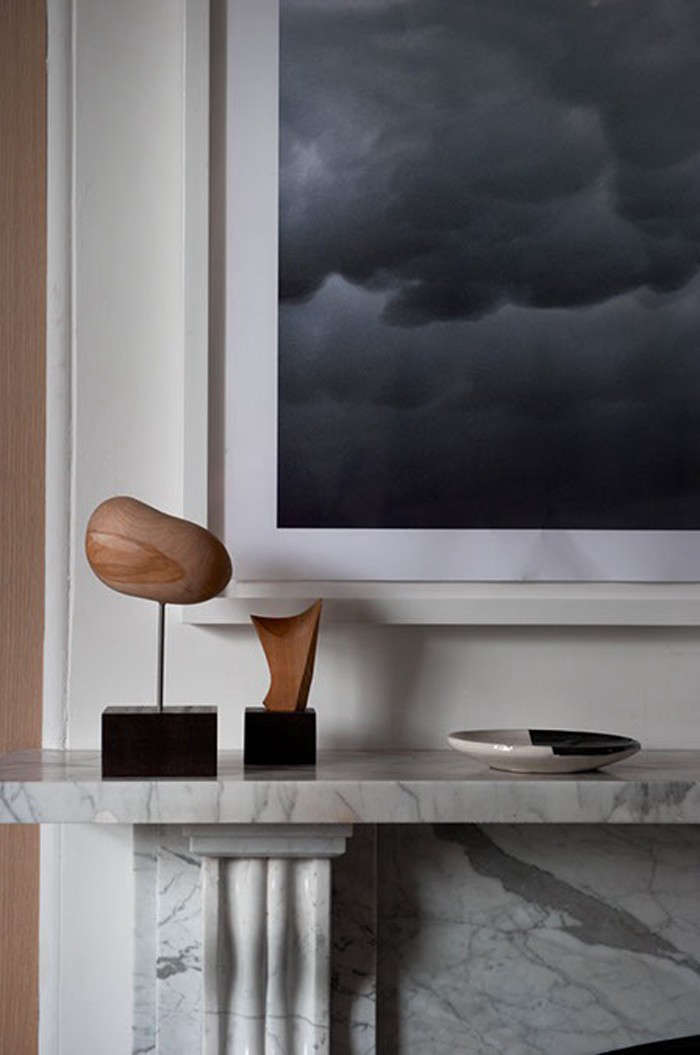 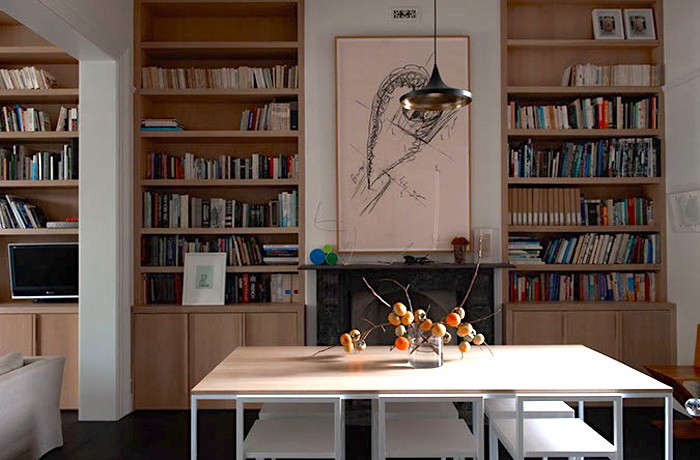 Above: A charcoal drawing by Claes Oldenburg has pride of place above the mantel in the dining room. 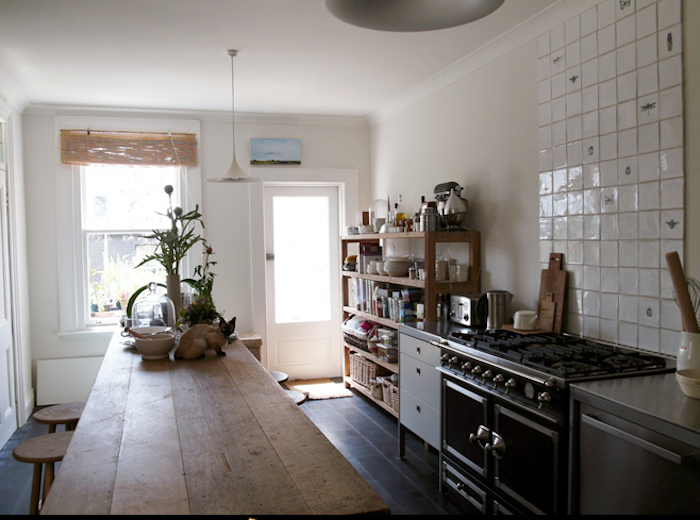 Above: “We like the idea of a country kitchen in the city,” Houle says. “We love to cook and the long antique butcher’s bench was up to the task.” 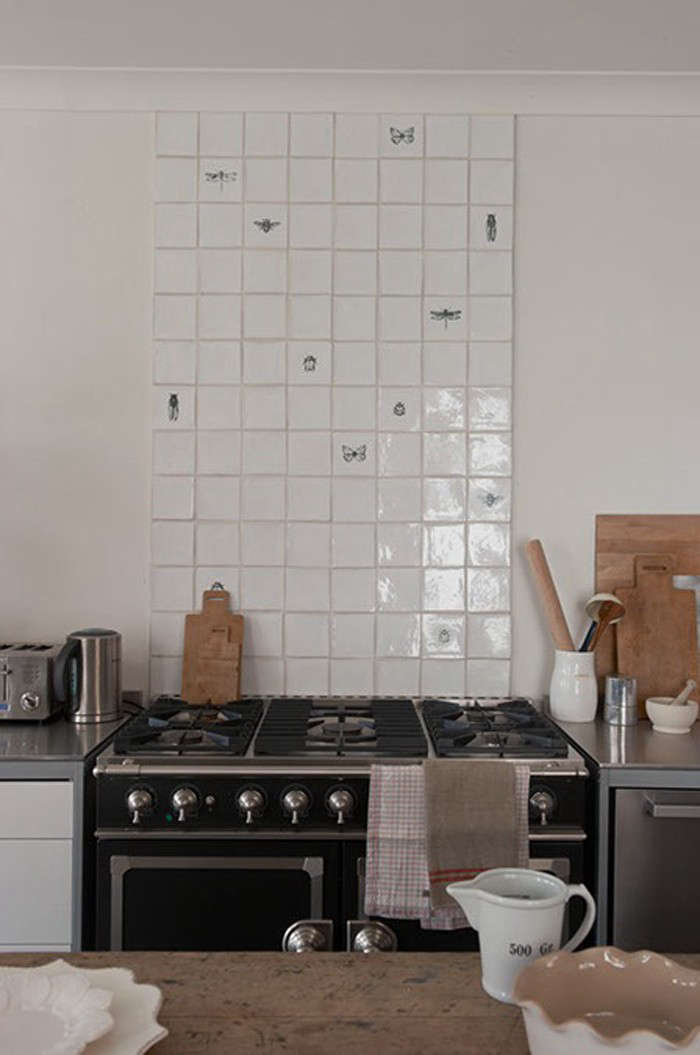 Above: A few tiles with insect drawings give life to the simple white tiled backsplash behind the cooker. 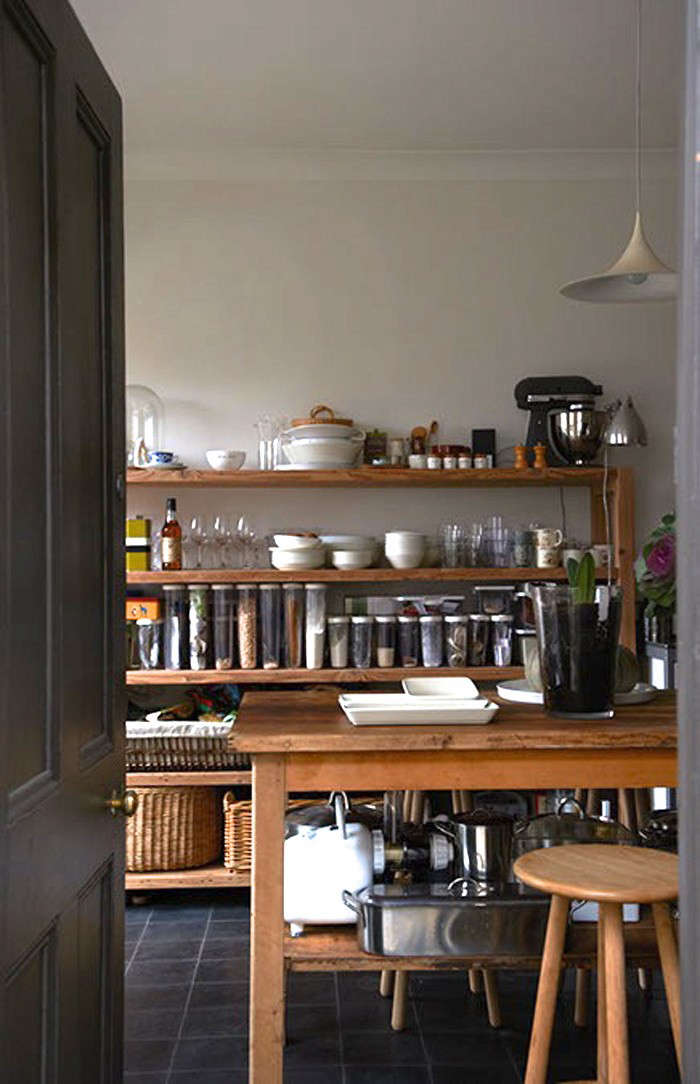 Above: A shelf by Australian furniture maker Mark Tuckey acts as an open larder. 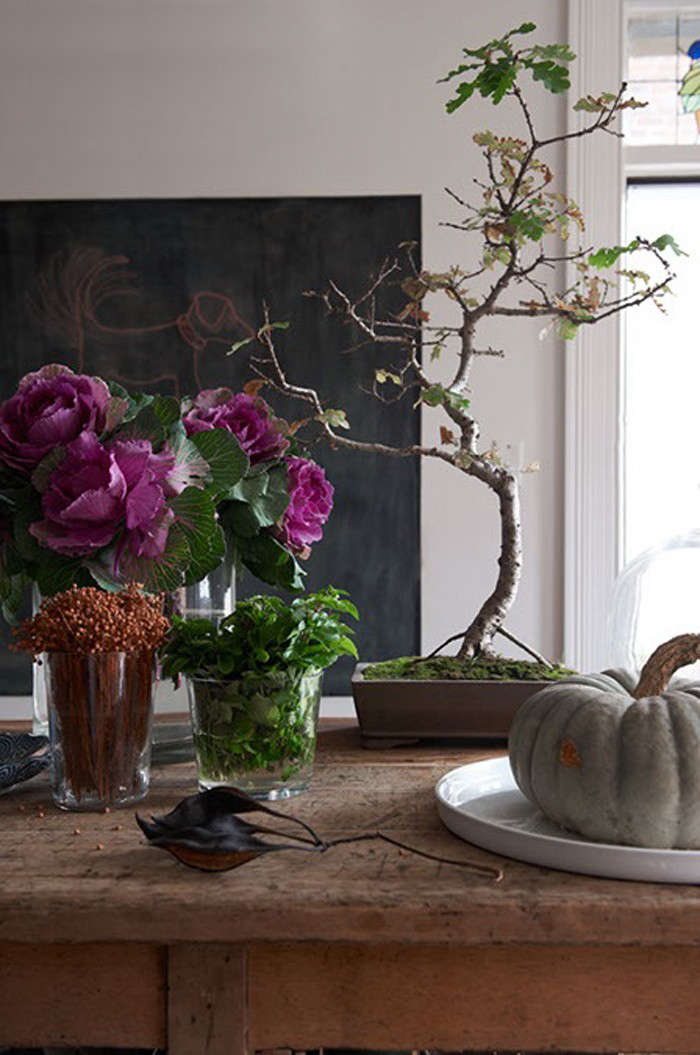 Above: “My favorite part of our renovation is seeing the house come to life as the light floods into what were otherwise dark Victorian spaces,” Houle says. 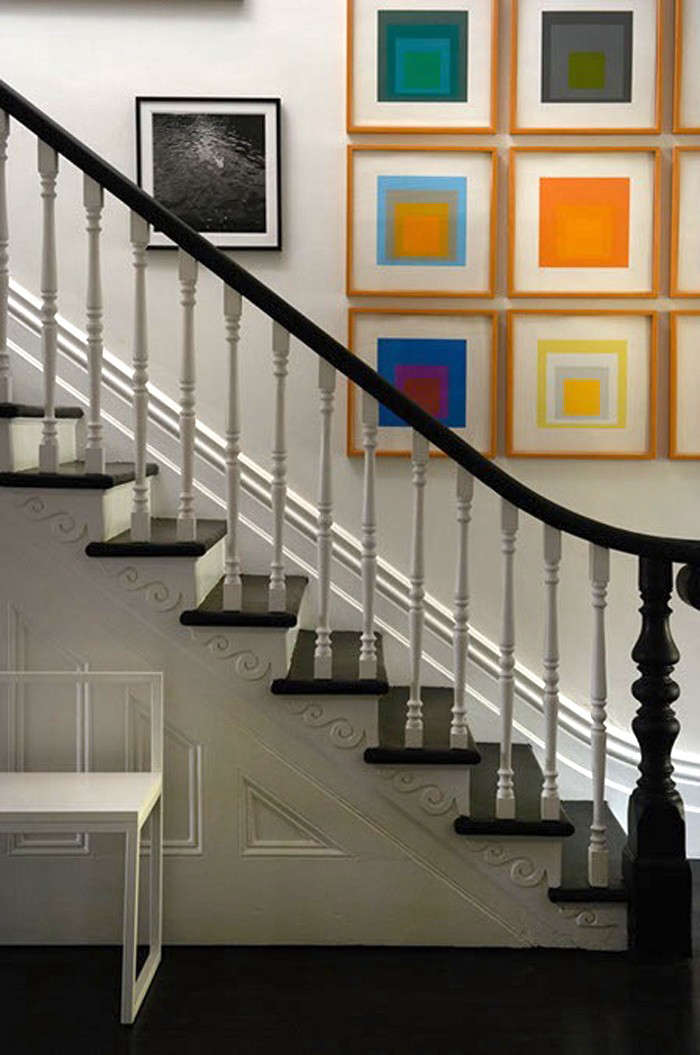 Above: The Victorian stair rail is sandwiched between the geometries of a mid century chair (Fronzoni ’64 Chair) and a set of original Josef Albers prints that the couple purchased in New York. 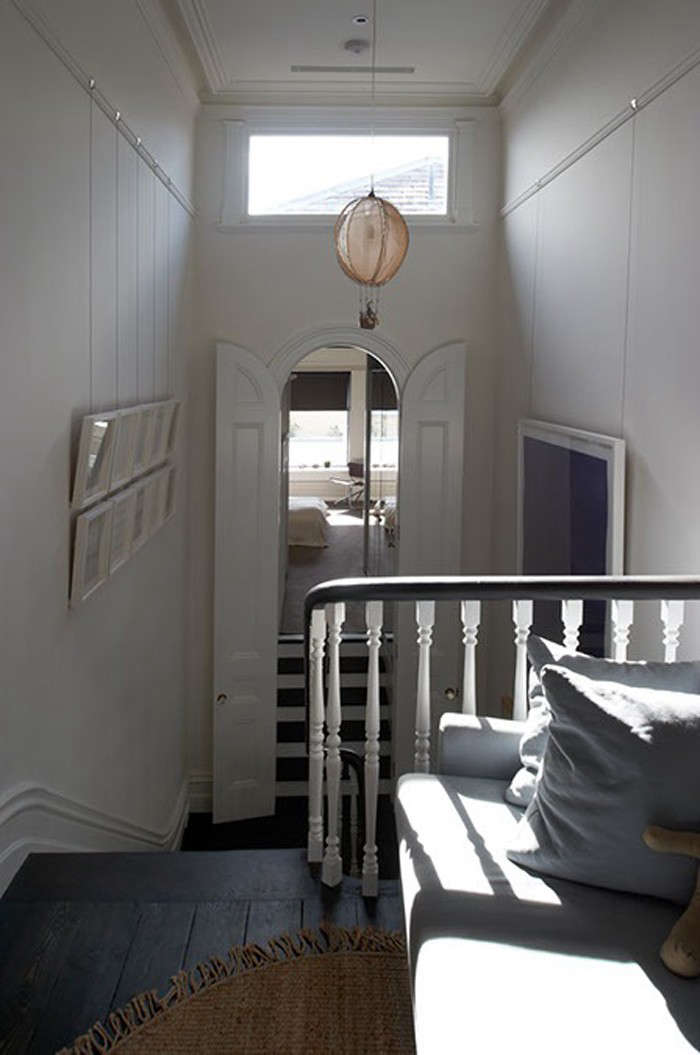 Above: A view from the landing at the front of the house to the modern master bedroom extension at the back of the house. 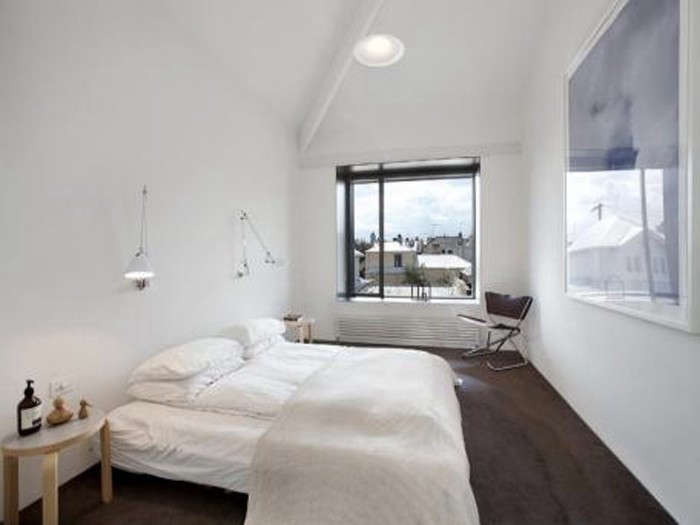 Above: “It is important to us to distinguish new build from the original Victorian architecture,” Houle says. “The lack of cornices and baseboard trim along with the steel windows help delineate the new extension from the original house.” 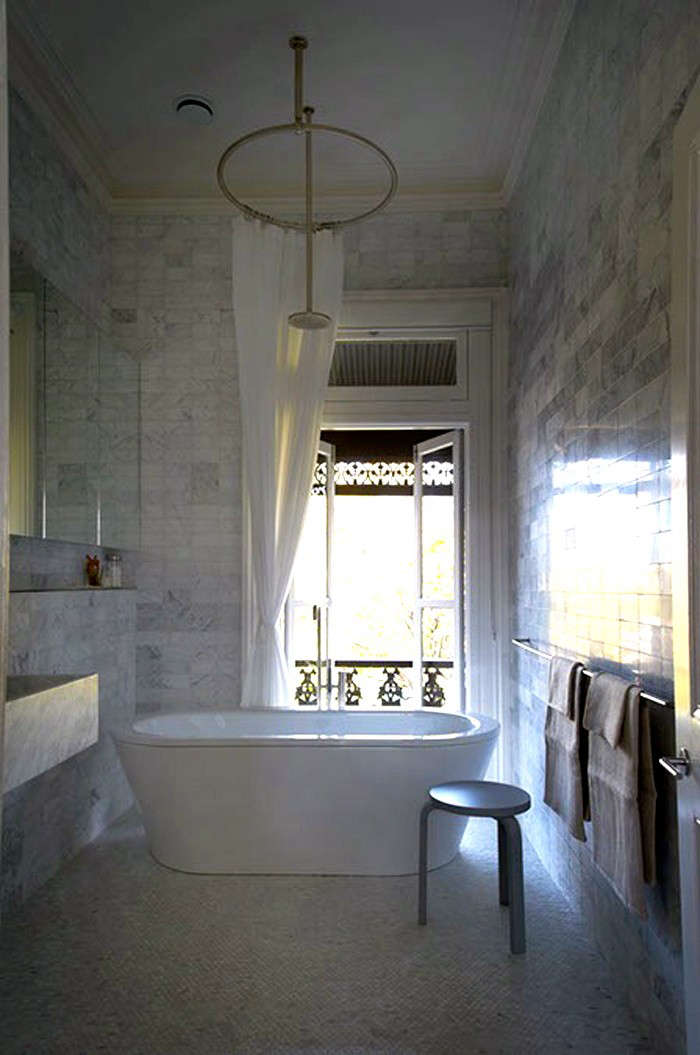 Above: The marble tiled bathroom looks out onto the front balcony. 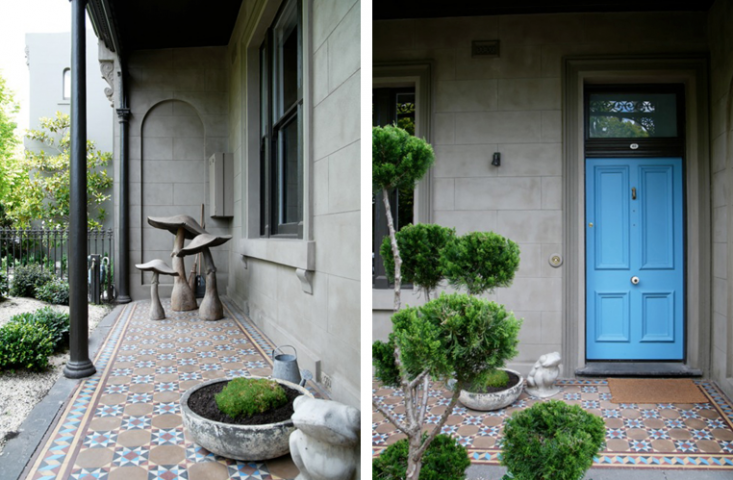 Above L: Antique mushrooms that were originally theatre stage props bring an element of surrealism to the entry. Above R: The color of the door is a custom color from Porter’s Paints, aptly named Victorian Sky. 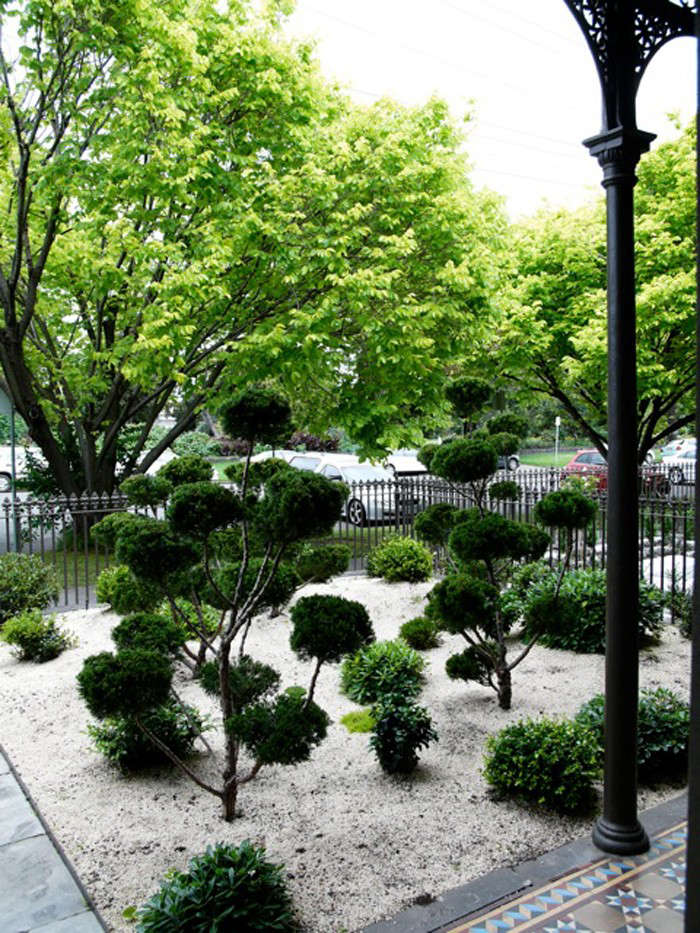 Above: The front garden is filled with Cloud Trees which have been pruned following Japanese Niwaki principles. “We love anything Japanese and have a particular interest in trees and garden design,” Houle says. N.B.: To learn more about Cloud Pruning, see Topiary Cloud Pruning as Arboreal Art.