Irene Neuwirth is an LA jewelry designer who specializes in pairing the fun with the refined: Picture Cleopatra’s jewels given a 21st-century California twist with clusters of raw boulder opals and sapphires in shades of the Pacific. (A sub-speciality is making diamond-edged dog-portrait pendants that Liz Taylor would have adored.)

For her flagship LA boutique, Neuwirth wanted to “take the intimidation out of fine jewelry shopping.” She leased a brick former men’s store on Melrose Place in West Hollywood next door to Isabel Marant, and hired kindred spirit LA design firm Commune to convey her playful approach. Then she came to them with an unexpected request: “I wanted to put in a kitchen as a place for everyone to hang out as in a home.”

Photograph courtesy of Irene Neuwirth and Commune, unless noted. 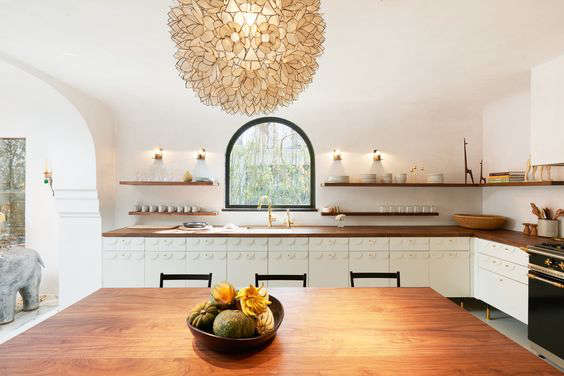 Above: Neuwirth didn’t mean a mock kitchen, she meant a working, eat-in kitchen with nods to old Hollywood that takes up a full third of the store. Commune responded with a Moroccan-style arched entry that leads from the living-room-like middle of the shop to a cove-ceilinged space with custom cabinets elevated on brass legs and trimmed with scalloping borrowed from Neuwirth’s signature teardrop earrings. The arched window overlooks bamboo trees. And yes, that’s a Lacanche range. 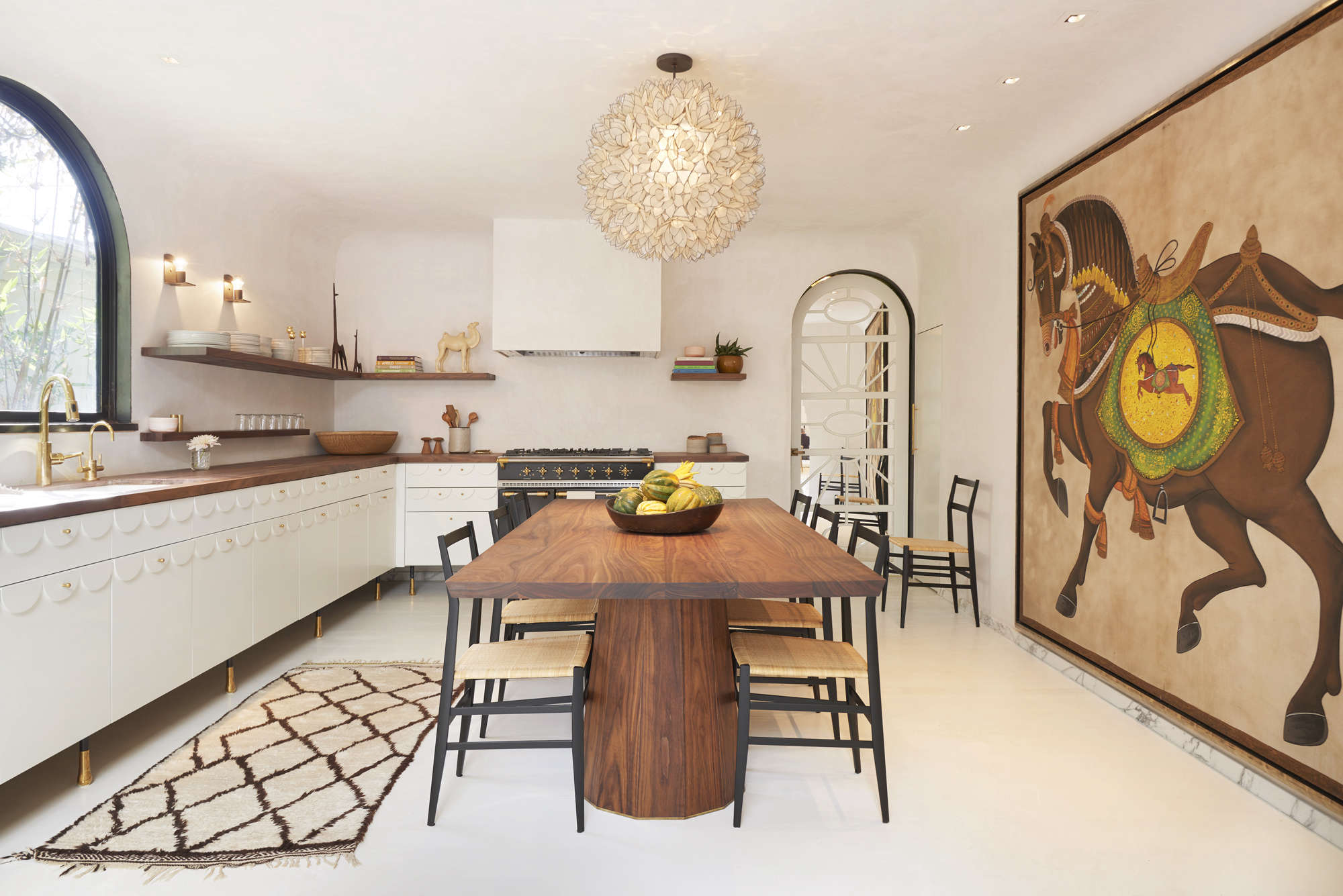 Above: “Most people come in and say ‘Where am I?'” Neuwith tells us. Commune bought the giant horse painting at an auction of the estate of Tony Duquette, the great Hollywood set designer and tastemaker. The piece helped set the project’s fanciful approach, Irene says. The wood floor is painted the same Benjamin Moore white as the cabinets, and, Irene reports, has held up surprisingly well. Commune modeled the mirrored door after a Moroccan design: “We wanted even the door to the back of the house to belong to the world we created for Irene.” Look carefully to the right of the door and you’ll see the hidden fridge: It’s a Liebherr, inset into the back wall and barely visible behind a painted wood panel. 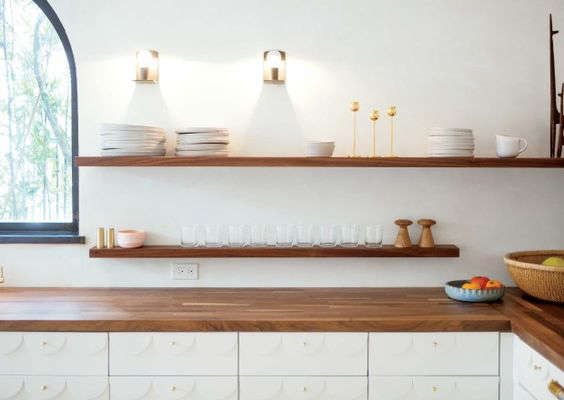 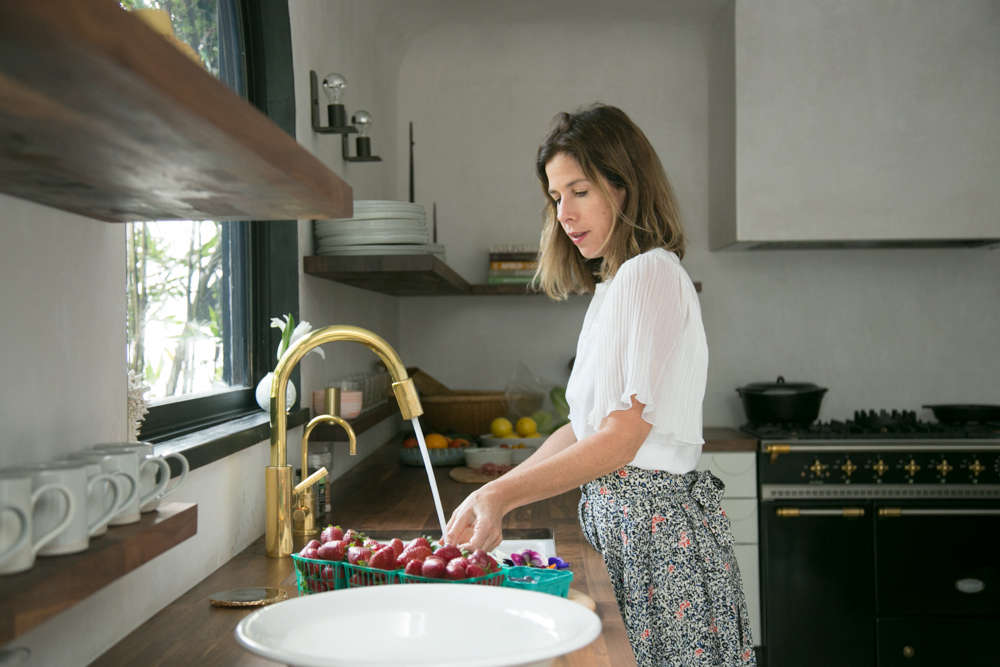 Above: Neuwirth mans the circular sink, the Nantucket, a fireclay undermount from Home Refinements with an East Linear Newport Brass faucet (see more pull-down faucets here). The kitchen is regularly used for client lunches, and chefs from Sqirl and Alma have been recruited to put on dinner parties. Photograph courtesy of Salad for President. 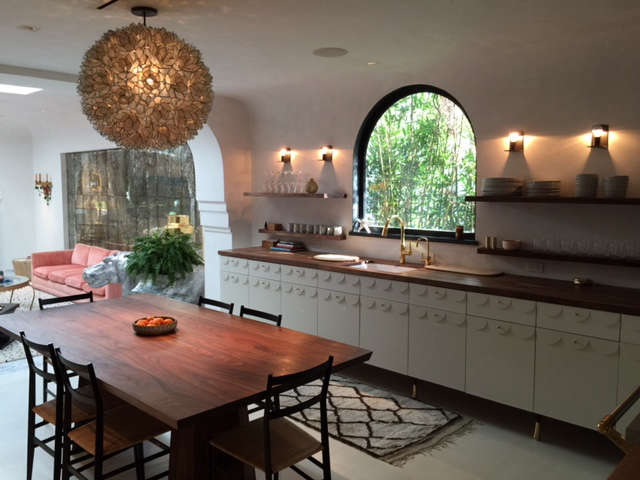 Above: A Capiz-Shell Lotus Hanging Lantern hangs over a Commune for Environment Split-Base Dining Table, an out-of-production design of black walnut with a bit of hidden bling: The inside of the curved legs are sheathed in copper “with facets like my jewelry,” says Neuwirth. The chairs are Cassina’s reissue of Gio Ponti’s minimalist Superleggera.

Irene Neuwirth is at 8458 Melrose Place in West Hollywood.

Take a look at some other Commune-designed kitchens:

High Style from Mexico, via The Citizenry

Kitchen of the Week: A Cook Space in Natural Materials on a Portuguese Farm