Founded just a decade ago–by siblings Pamela and Ramin Shamshiri and their friends Roman Alonso and Steven Johanknecht–Commune has managed to become the epitome of California cool and one of the most in-demand design firms around today. Set up as a multidisciplinary LA-based collective “focusing on enhancing life through design,” the group has had its hand in an impressive range of projects. Its recently published first book, Commune: Designed in California, is a compendium of the highlights, including each of their own houses.

Interestingly, none of Commune’s originators is from California (in fact, they each arrived from distant parts: the Shamshiris were born in Tehran, Alonso is from Caracas, and Johanknecht grew up in Upstate, NY). How did they come to define their style? And what goes into the Commune way of doing things? We asked Pamela to fill us in.

Remodelista: You’ve managed to create a look that’s quintessentially Southern California. How did this evolve?
Pamela Shamshiri: We had a fantasy of this European expat who moves to Topanga and brings all her family heirlooms with her and continues to collect and add to it. That was the chicest thing to us, and completely California modern. It’s not about purity in any way, it’s about a collected environment that is a summation of your history and the way you live. Maybe our look grew out of this shared fantasy that we all four would refer to. 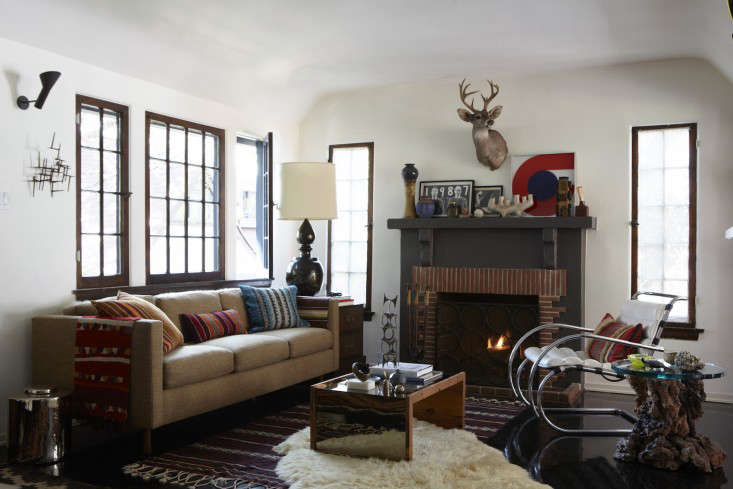 RM: Three of you were born overseas, how have you distilled Californian elements into a unified vision?
PS: One of our ex-designers refers to the four of us as “refugees of aristocracy.” This always made me laugh, but there’s a lot of truth to it. We all came from somewhat aristocratic backgrounds and experienced the loss that comes with revolution. This not only gives you a longing and appreciation for your own history and your old  way of life, but a true appreciation for what you have now. Particularly the freedom that one has in moving to California. Your past is of little consequence here. You can have a fresh start and live relatively unjudged. That’s something we’re very grateful for. 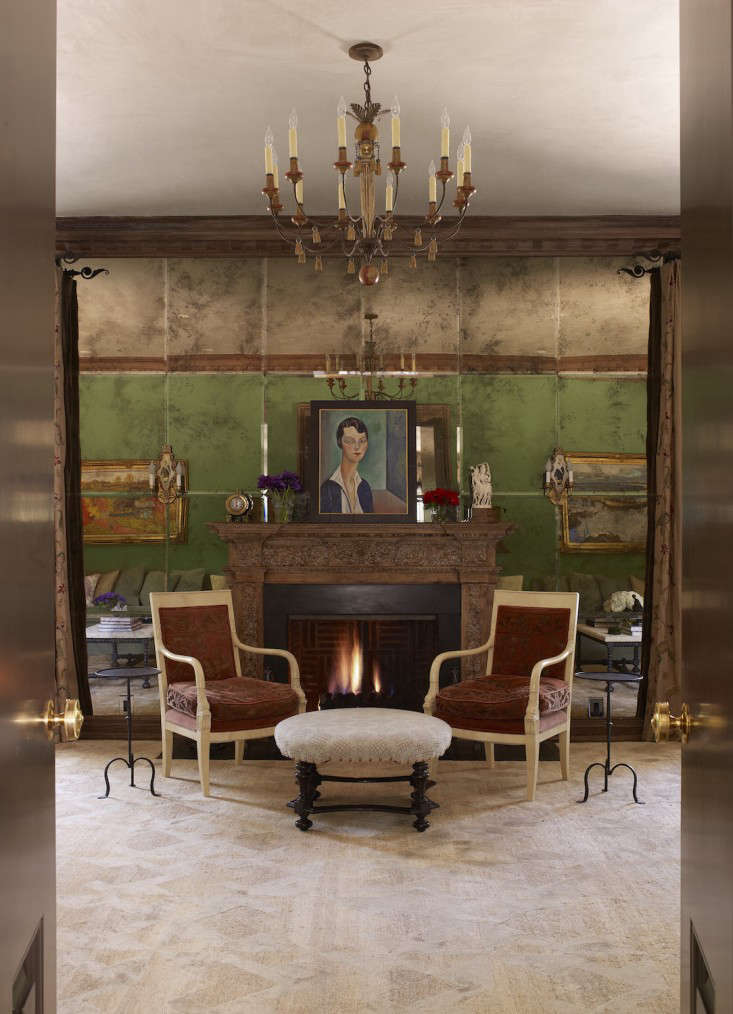 Above: A room featuring shades of Commune’s signature greens. Photograph by Richard Powers.

RM: The role of history plays a large part in your projects. How do you gather and use backstory to inform a project?
PS: We start with history. The exact location (city, street, neighborhood), the cultural history of the place, the moment in time, the history of our client or brand, the history of the building–it’s all gathered from books, the Internet, and quite often interviews. Then we pour over it all together and look for links and messaging. After that, we assemble the design elements that will evoke that feeling or experience we’re going after.

RM: Can you discuss your use of color? You feature hues that have an Old World feel but are modern at the same time.
PS: There is such a fear of color right now. People think it’s a big commitment, but it doesn’t have to be. Historically, color was used to play on the psychology of spaces, and we’re interested in that aspect of it. More recently, we’ve been using “Old World” colors because they evoke emotions and set the mood. We’re just finishing a sixties metal post-and-beam house that’s all pastels. On a basic level, color– in good doses–makes you happy. 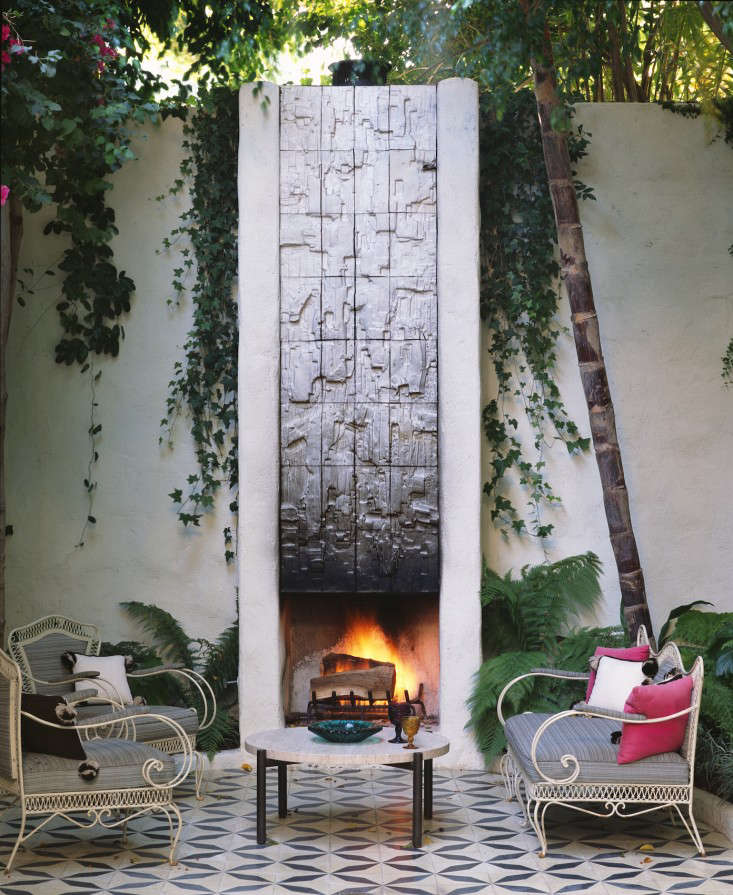 Above: A Stan Bitters’ fireplace was created purposefully narrow, so that the soot would coat the tiles and accentuate them.

RM: The handcrafted movement has really taken off in the last five years, particularly on the West Coast. You have always included local artists and craftspeople in your work–what was the impetus for this?
PS:  The notion of assembling a team of artisans and craftspeople for a project was born out of working in the film world. My brother and I used to do production design and we were always blown away by the quality of the artisans and craftspeople available. Our sets always had a “hand” to them. How good that hand was had a direct effect on how communicative, successful, and human the sets were. We wanted our projects to have the benefit of a good team. You really are only as good as your team. 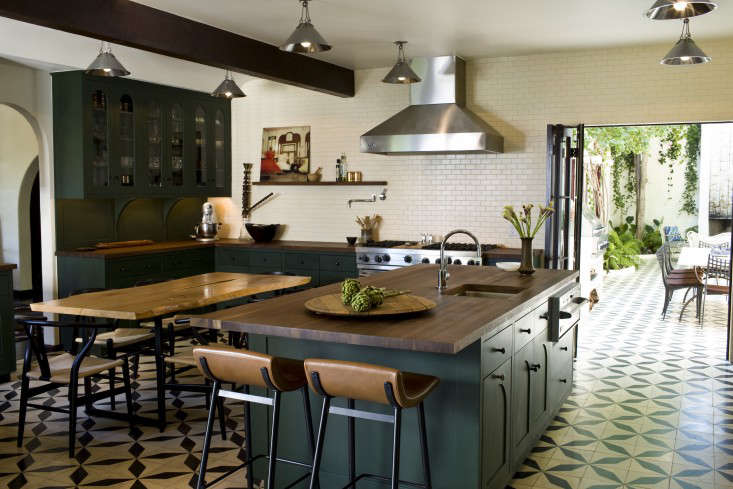 Above: The kitchen in Ramin Shamshiri’s Spanish Colonial house in Los Feliz. The tiles are Commune’s own design. Photograph by Corey Walter.

RM: You mix elements and influences from near and far, yet make them work together in a seamless way. How do you achieve this?
PS:  We look for an emotional link or common attitude between the eras we’re referencing. You can’t combine any two movements, they have to complement each other and relate in ethos. On a more technical front, we’re absolutely strict about proportion. For two disparate pieces to work together, they need to relate in scale and weight. That has to be perfect. 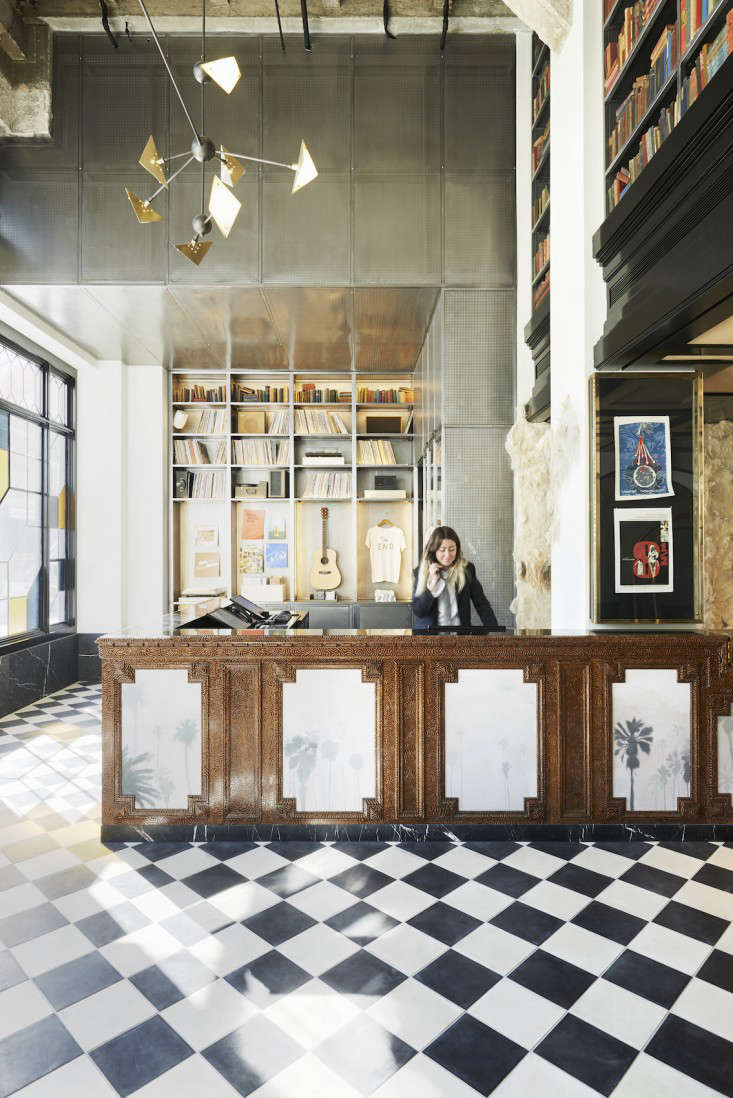 Above: The Ace Hotel in Downtown LA–one of several Ace Hotels designed by Commune–is filled with surprise elements by artists. The reception desk is the work of the Haas Brothers, who used elements from old offices in the building. The wall of sheep’s wool is by Tanya Aguiñya. Photograph by Spencer Lowell.

RM: Tell us about your use of tiles and patterns? How do you incorporate this layer into a project?
PS: Layers take careful planning, and the use of geometric patterns is key for us. Maybe this comes from growing up between Rome and Tehran. Geometric patterns are found in so many civilizations across many centuries, they’re timeless and classic.

RM: Do you feel there’s an aspect of jolie laide to what you do?
PS: I love that. As I’m staring at an old photo of Angelica Houston pinned above my desk, I have to say yes. That’s our kind of beauty. 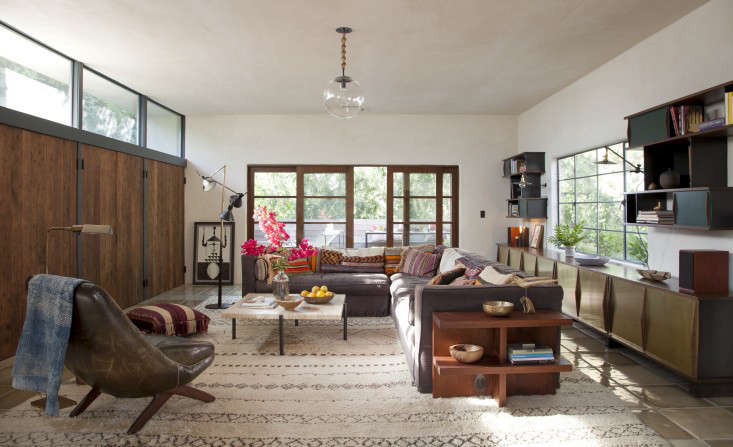 Above: At the Japanese House on Carnation Street, the mandate was rustic, modern, and no paint (the walls are made of clay). Photograph by Amy Neunsinger.

RM: In your book you say that the architecture of a home needs to be authentic and appropriate to the era, but that the furnishings are where you can express style and character. How do you work with a client on this front?
PS: With residential clients, we work very hard to honor the history and original design of their homes, whether new or old. We try to make it look as if they stumbled into this architecturally untouched, perfect home that is true to its roots. It’s that “un-design” design that we are after. It’s the biggest compliment to me when people think a new kitchen was always there, or that the house has been untouched since 1918–but somehow it’s got all the conveniences of modern-day kitchens and bathrooms, and has a connection to the outdoors.

With furnishings, we’re more expressive and often go for a layered look. If we’ve done our job right, the elements look like they’ve been collected over time by our clients and not by us. At move-in, we leave the house about 25 percent empty with room for growth. Our clients are so engaged and part of the process, they’re able to grow into the design seamlessly. It’s a beautiful thing to watch. It comes from arriving at a look together. 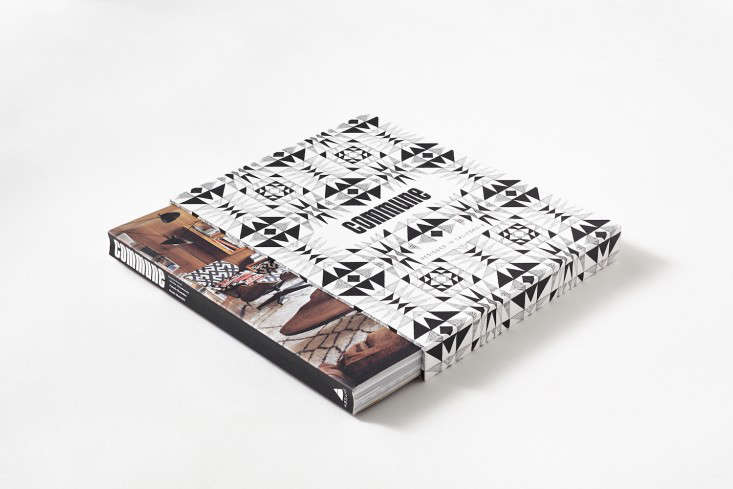 Above: Commune: Designed in California is published by Abrams and available on Amazon for $42.88.

RM: Could you have created your firm in another city?
PS: Commune would not have made it any place else. Ten years ago, when we were pitching the idea of this multidisciplinary design studio that’s open and willing to design anything and everything and wanting to promote artisans and craftspeople, no one batted an eye here. We wouldn’t label ourselves as architects or interior designers or graphic designers. We kept it all loose and open. We blurred lines between disciplines, eras, and styles. In other places, people were saying, “You have to have expertise,” or “I don’t understand what you do.” Here in California, in this land of reinvention, our clients just say OK, let’s do it.”

Commune is a longstanding member of the Remodelista Architect/Designer Directory. See more of the firm’s work in: