We’ve been tracking the work of Niels Stroyer of Frama for a while now. A member of the Copenhagen design set, Frama is an interiors and product design studio anchored in a grand former pharmacy in the center of the city—with a retail space and café that just opened last week. The studio defines its creative approach as a dialogue between two opposite poles—”between a classical and contemporary approach, and between digital and analogue production.”

Our latest obsession: Frama’s new kitchen system, which Stroyer says (quoting an Italian saying): “When you move from home to home, the most important furniture to bring along is the kitchen.” Frama’s philosophy? The kitchen should look like any other living space, outfitted with freestanding pieces that can work in any setting. Here’s a quick look at the components:

Above: The Frama Studio Kitchen is comprised of a few basic parts: a credenza, a tall cabinet, and a narrow side cabinet. 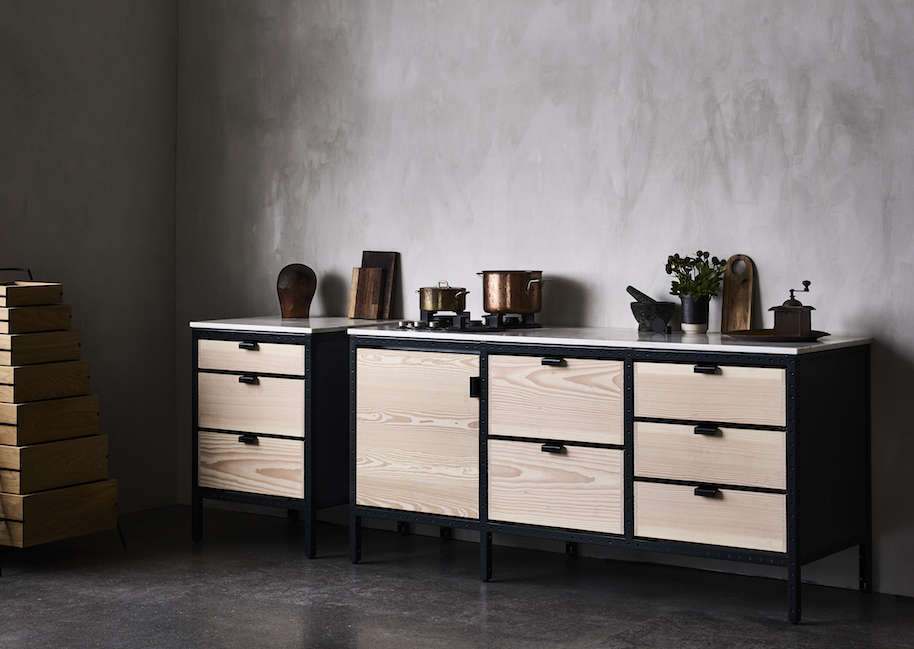 Above: The credenza can serve as a kitchen island or sideboard and can accommodate a sink, oven, or range. The single cabinet at left can be added for extra storage and worktop space. (At far left is Frama’s Sutoa Japanese-inspired chest of drawers.) 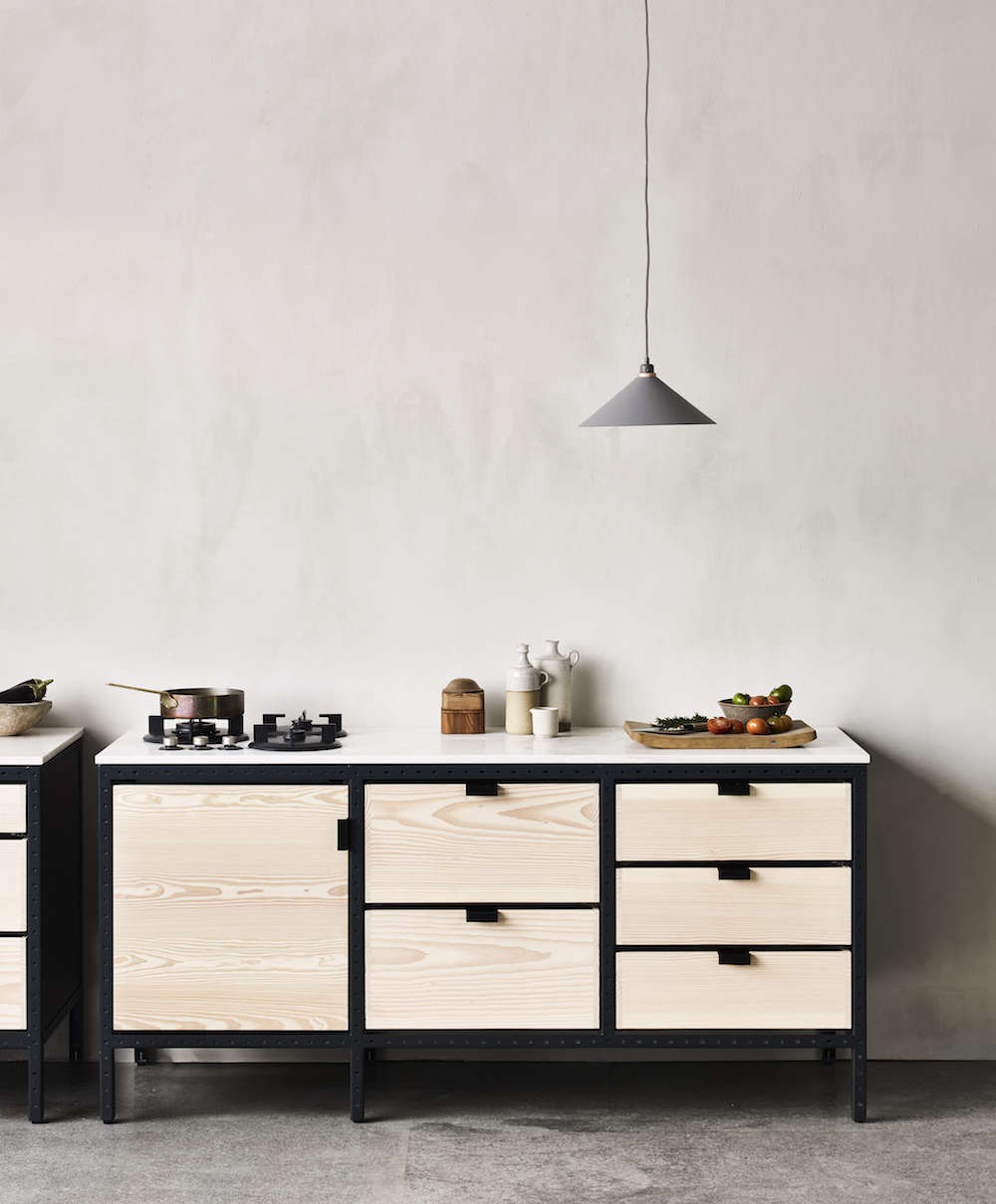 Above: The Frama kitchen is entirely freestanding; nothing is attached to walls or floors except appliances. Frama’s Geometric Cone Shade is available off the shelf in copper but can be ordered in other finishes. 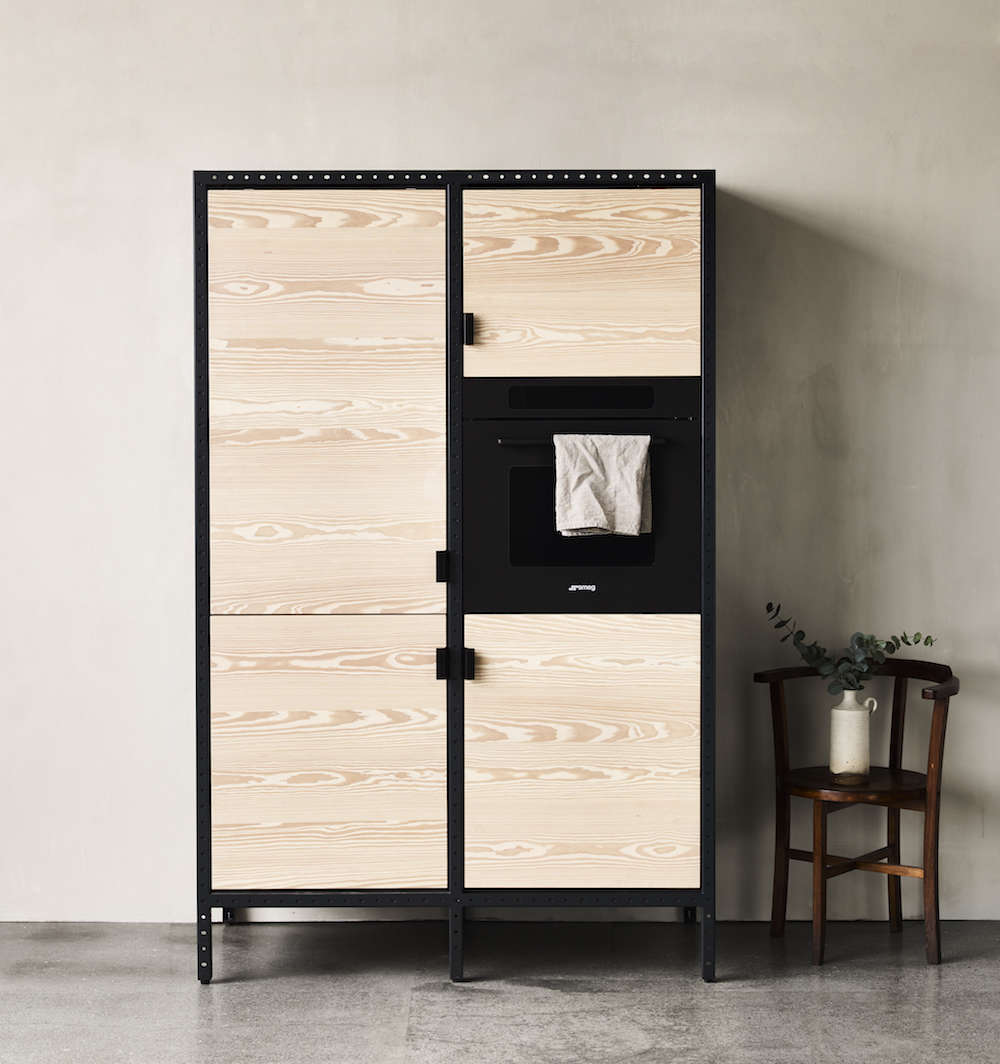 Above: The tall cabinet unit can house a refrigerator, oven, or microwave. 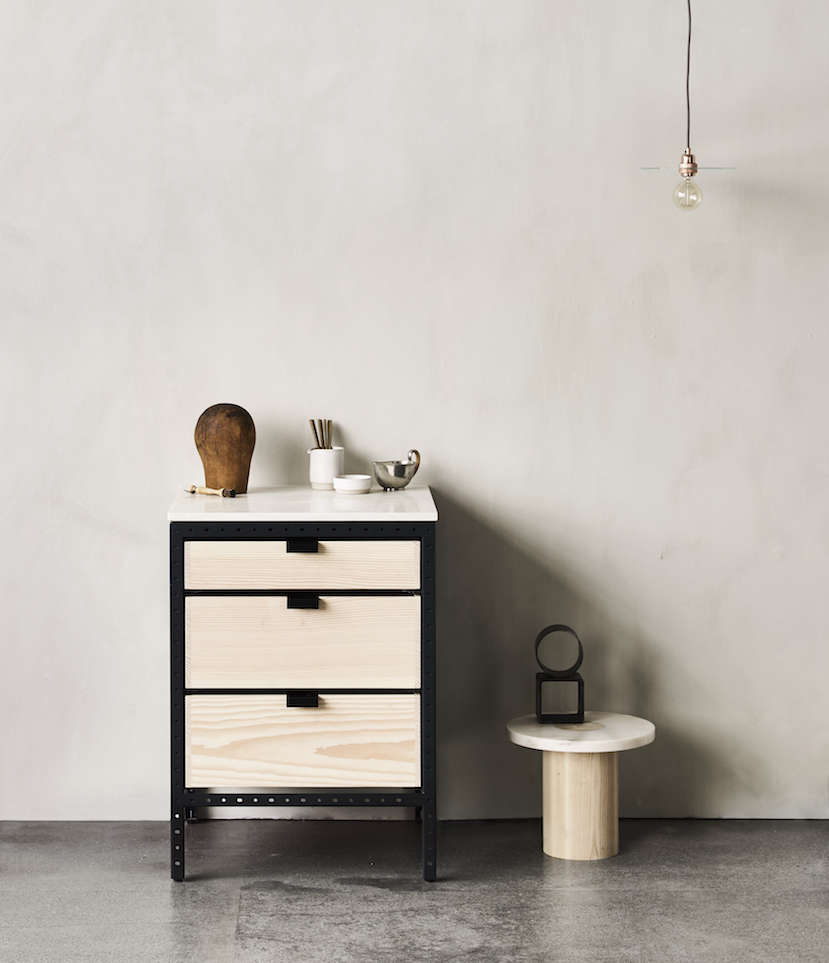 Above: The kitchen is framed in a black powder-coated anthracite grid. At right is Frama’s Sintra cork-and-marble side table. 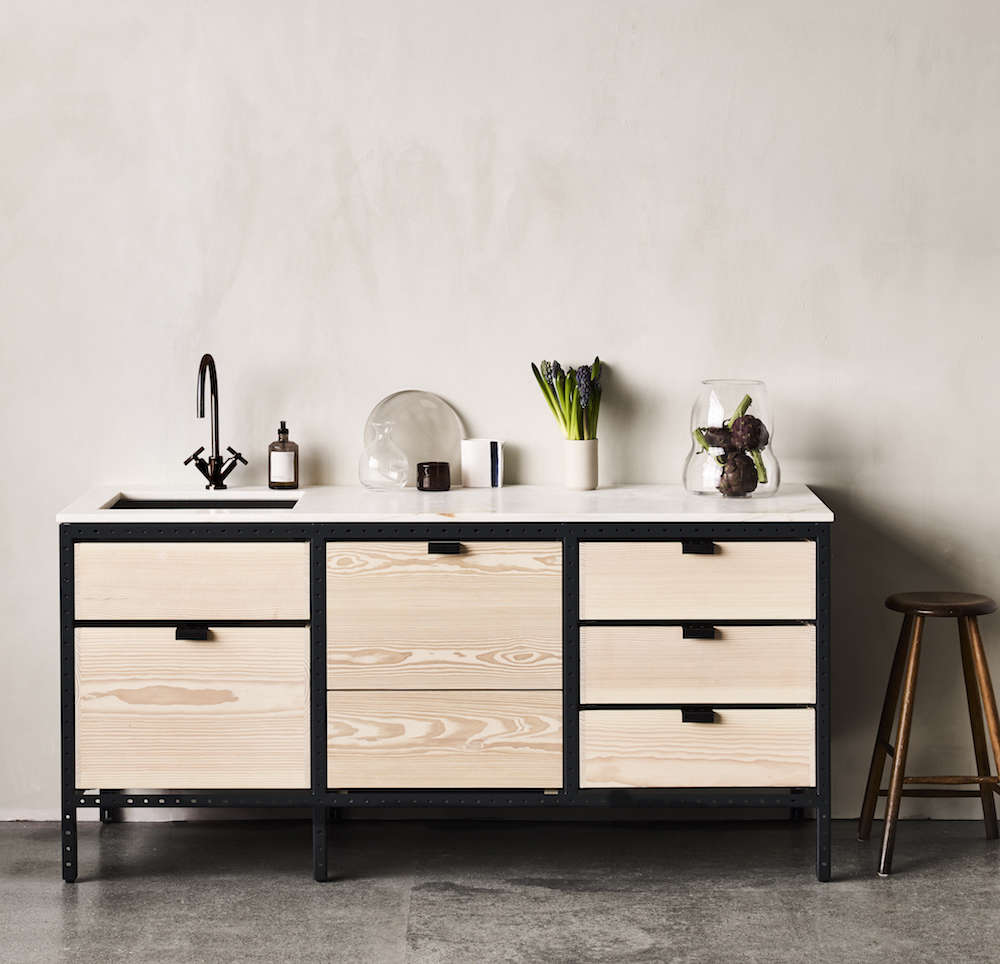 Above: Frama calls its kitchen “back-to-basics”—in a desire to contrast with increasingly complex kitchens, Frama is offering customers a low-tech kitchen system. 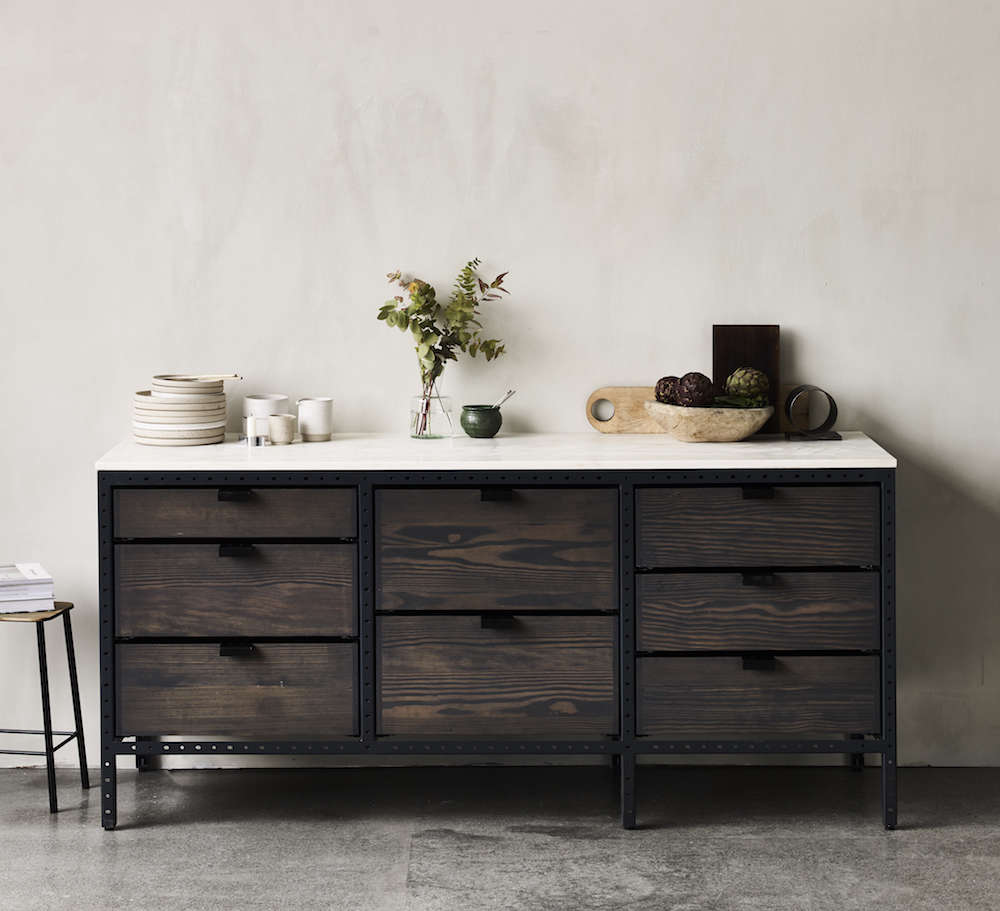 Above: The Studio kitchen is made in Denmark of Danish wood and metal with Portuguese stone countertops. The oiled wood cabinet fronts are available in a clear or dark stain. Frama’s Aj Otto Stoneware sits on top of the credenza. 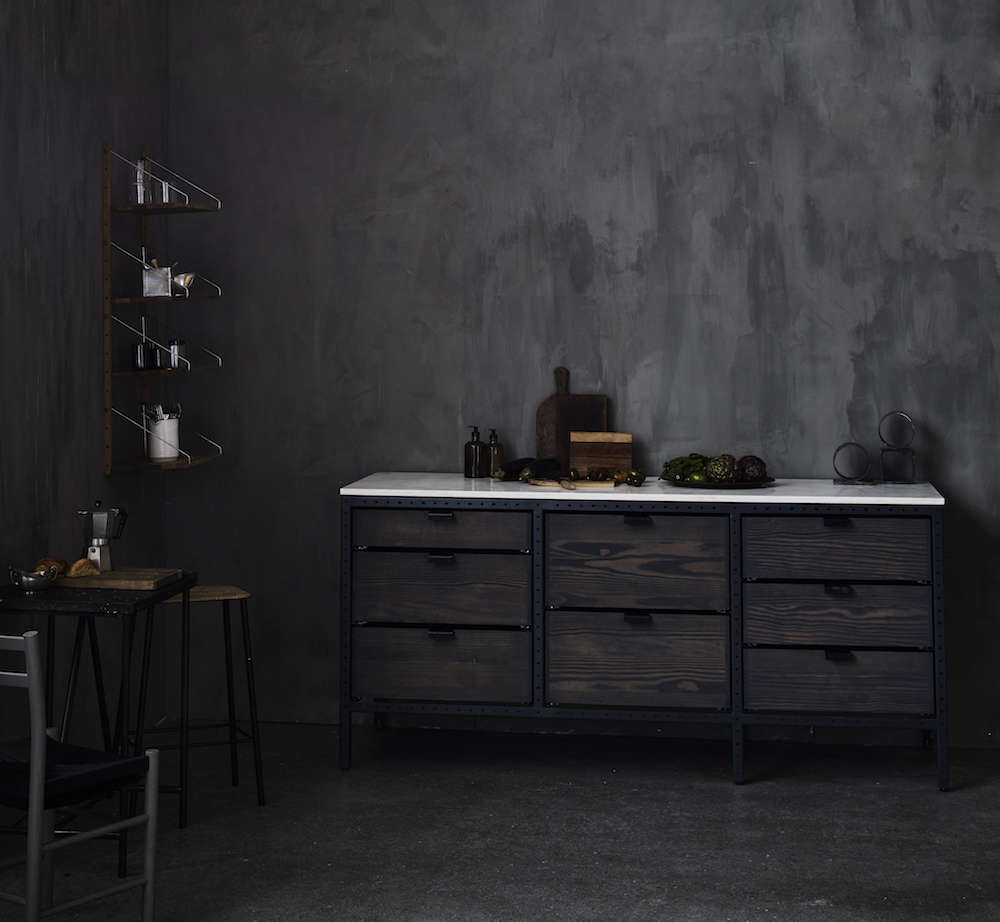 Above: At left are four of Frama’s Shelf designs over its Adam Stool.