Jamie Kidson’s grand hacienda-style home in Oakland is possessed by a spirit. But it’s not what you think.

The house was built in 1935 by a woman named Grace Bush, who was inspired by the 1917 Panama-California Exposition in San Diego (she had always longed for a Mission Revival–style home, a style popularized in Southern California in the 1930s). The Oakland house she built was a labor of love: She brought in artisans, woodworkers, and ironworkers to design details throughout the interiors. In the garden, Bush’s name is spelled out in stones set in the concrete courtyard.

Jamie Kidson, co-owner of Oakland store Atomic Garden, is only the second owner of the home. When she moved in with her family, she was careful to maintain the original fixtures; everything from the dog head door handles to the celestial-themed light fixtures to the details referencing marine navigation. Kidson never met Grace Bush, but after inhabiting her home, she feels a strong connection.

For a look at Kidson’s garden, see our post on Gardenista: A Simple Garden in Oakland, Chickens and Bees Included.

Photography by Mimi Giboin for Remodelista; styling by Alexa Hotz. 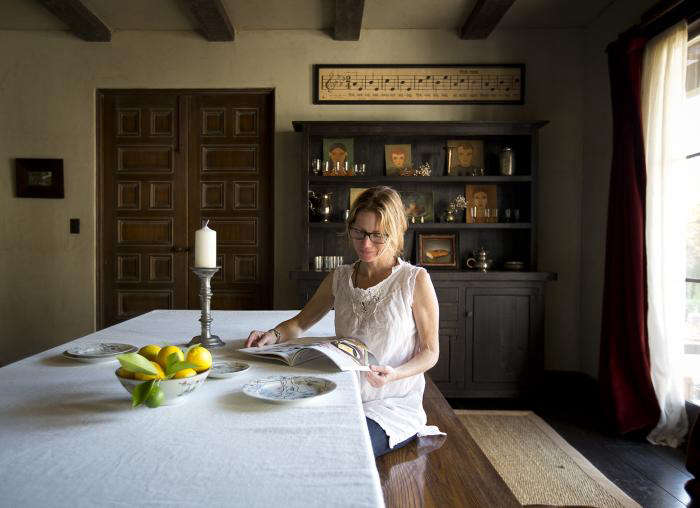 Above: Kidson in the formal dining room. 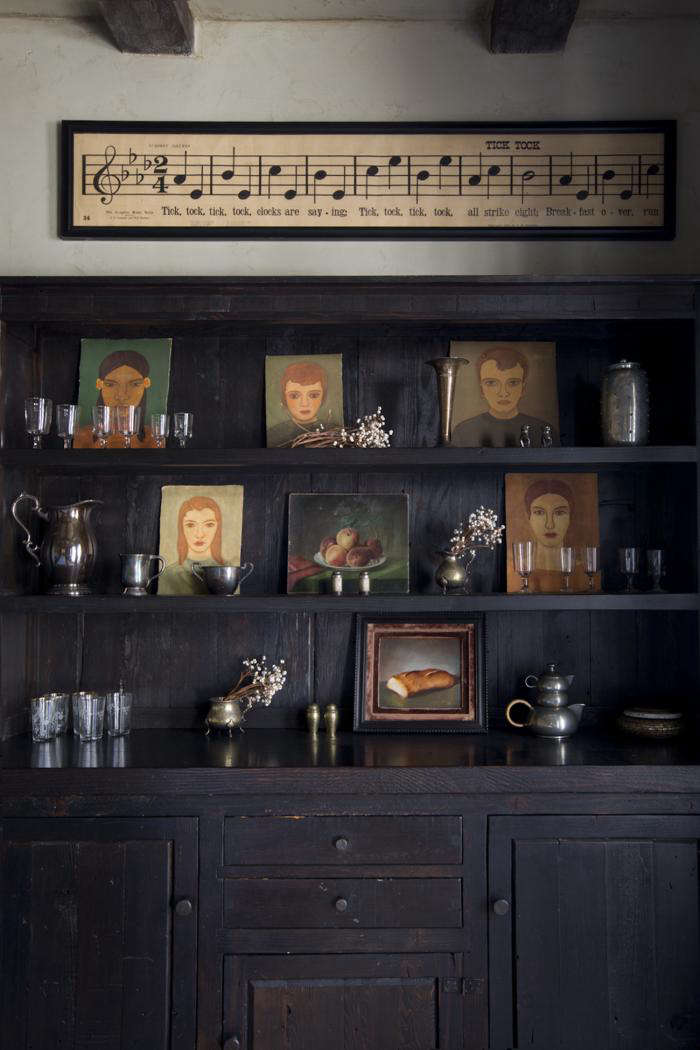 Above: “I love portraits,” says Kidson, who has been collecting large- and small-format painting for years. 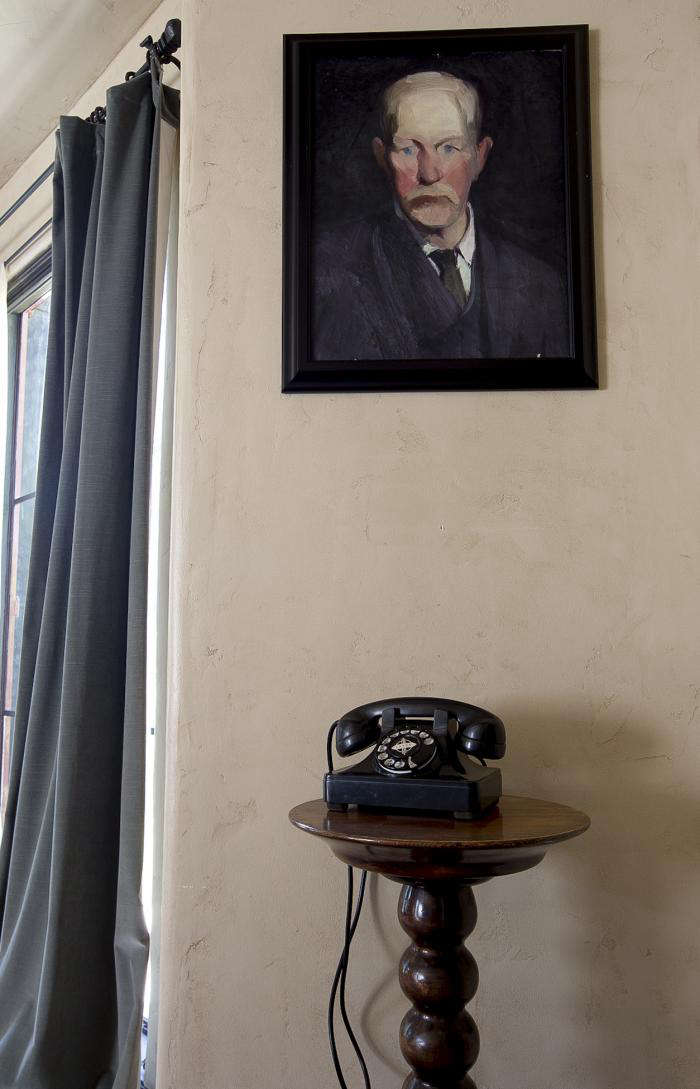 Above: A portrait above an antique telephone in the living room. 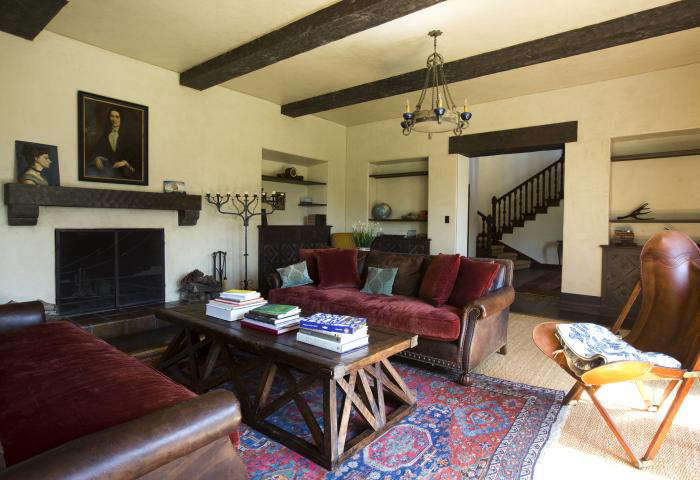 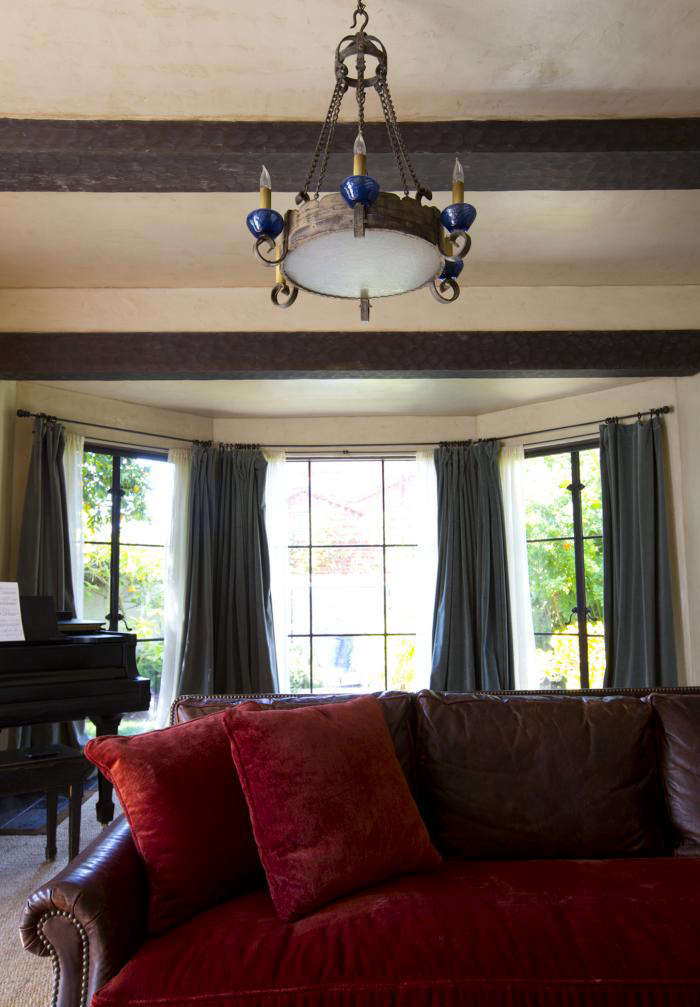 Above: An original fixture (Kidson kept all the original lighting throughout the house) hangs above a leather and velvet sofa. 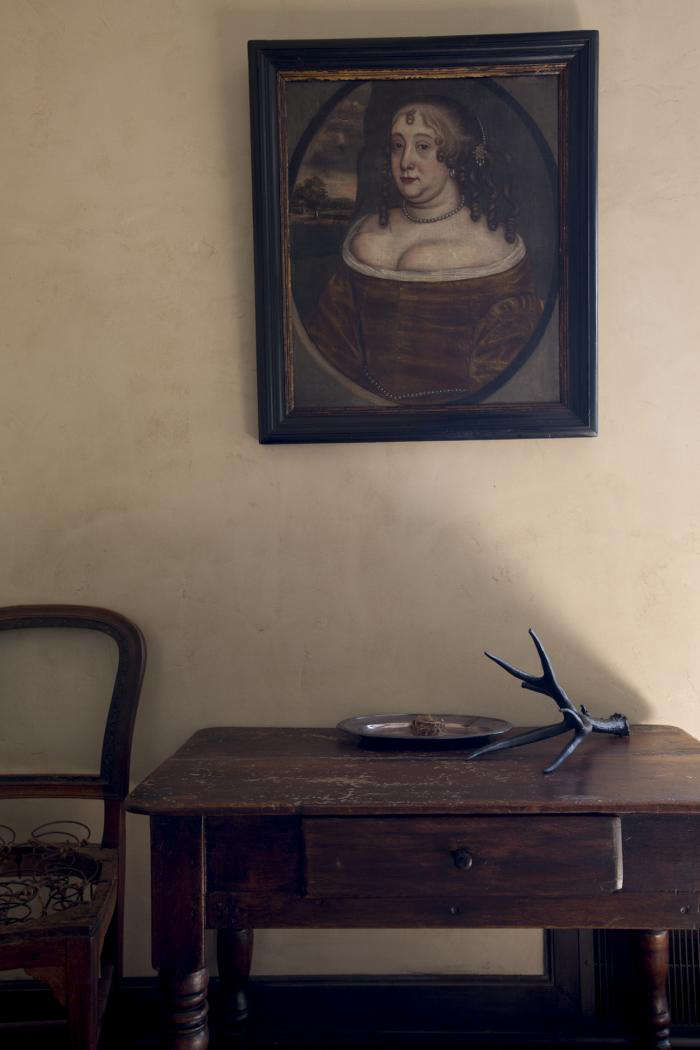 Above: An 18th-century painting from the school of Van Dyck that fell out of the high-end auctions: “I picked it up at the second-tier collections,” Kidson says. “She’s the grand dame of the house.” 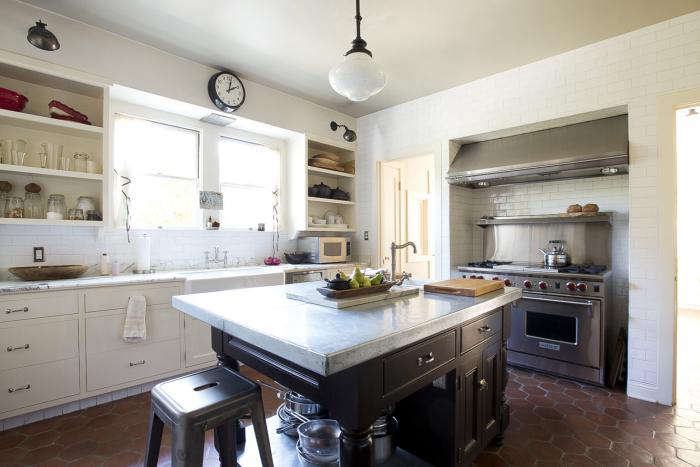 Above: The second part of the kitchen is the working kitchen, where the cooking happens and the large refrigerator lives. Former owner Bush had a live-in cook and would take her meals in the breakfast room in the morning, and dinners in the dining room. 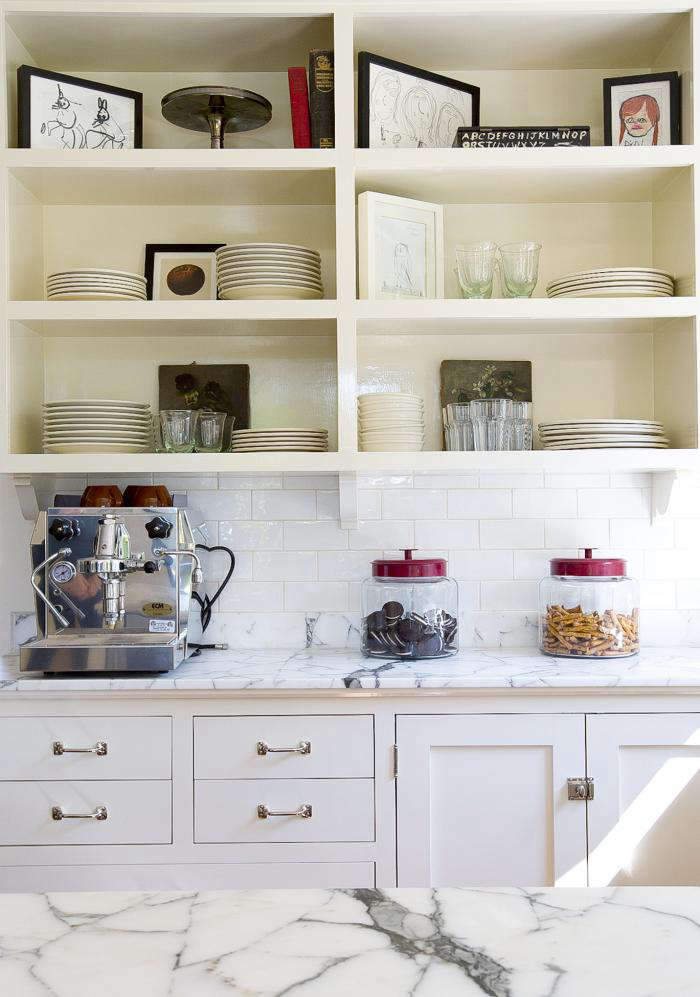 Above: The part of the kitchen that traditionally served as the breakfast room was renovated by Kidson. The original room had a large butler pantry that she decided to open up to make the kitchen functional for a family. 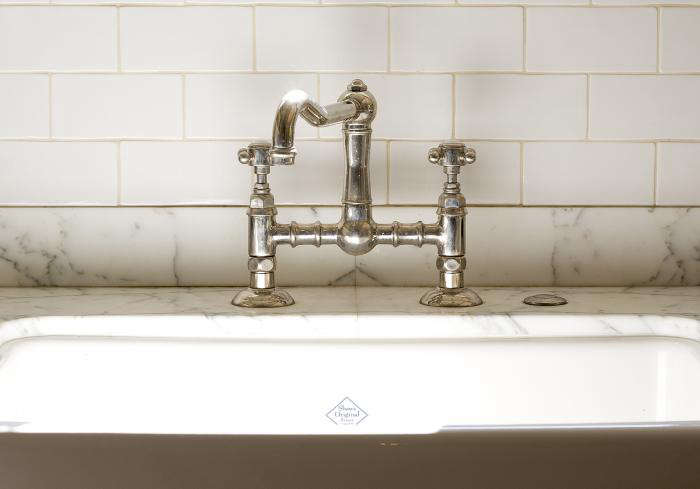 Above: A Shaw’s Original apron sink and a traditional kitchen faucet. 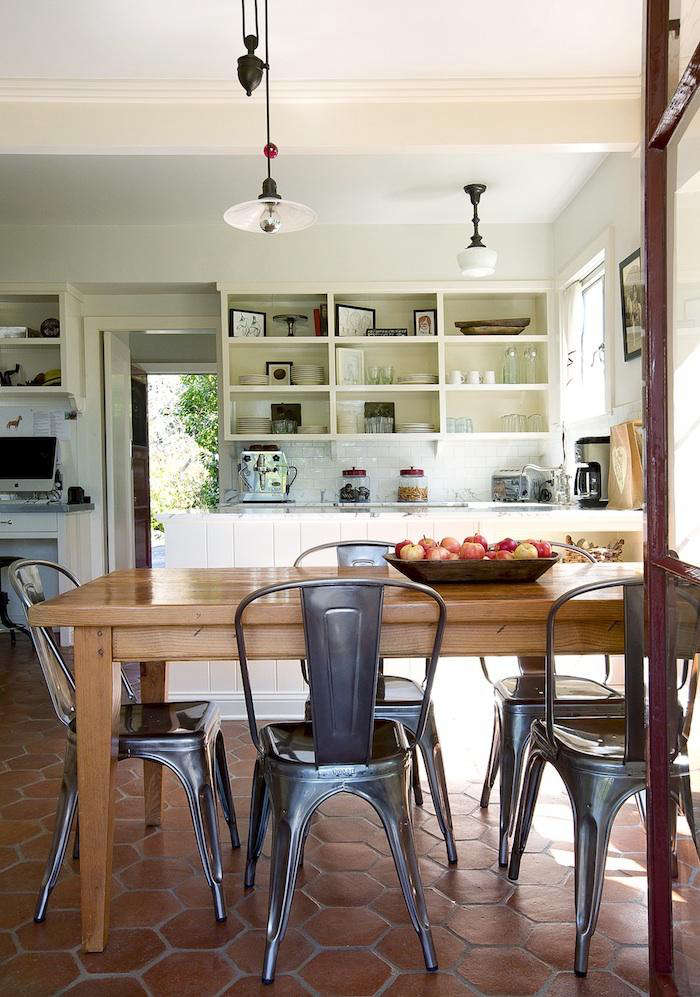 Above: The breakfast room is where Kidson and her family gather for everyday meals. 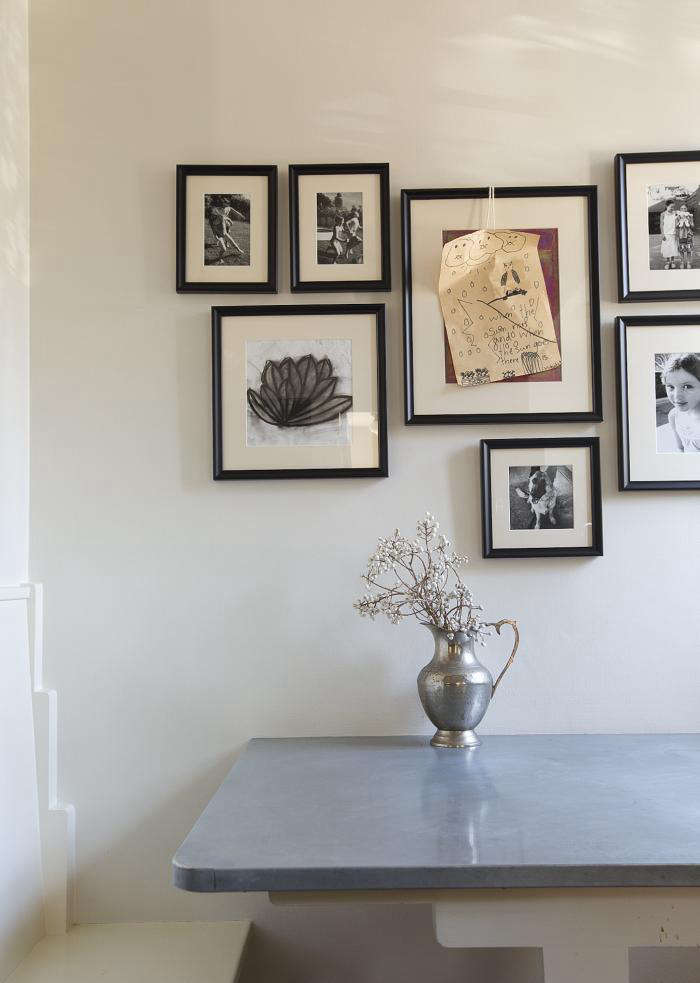 Above: Family photos and drawings above the original dining nook. 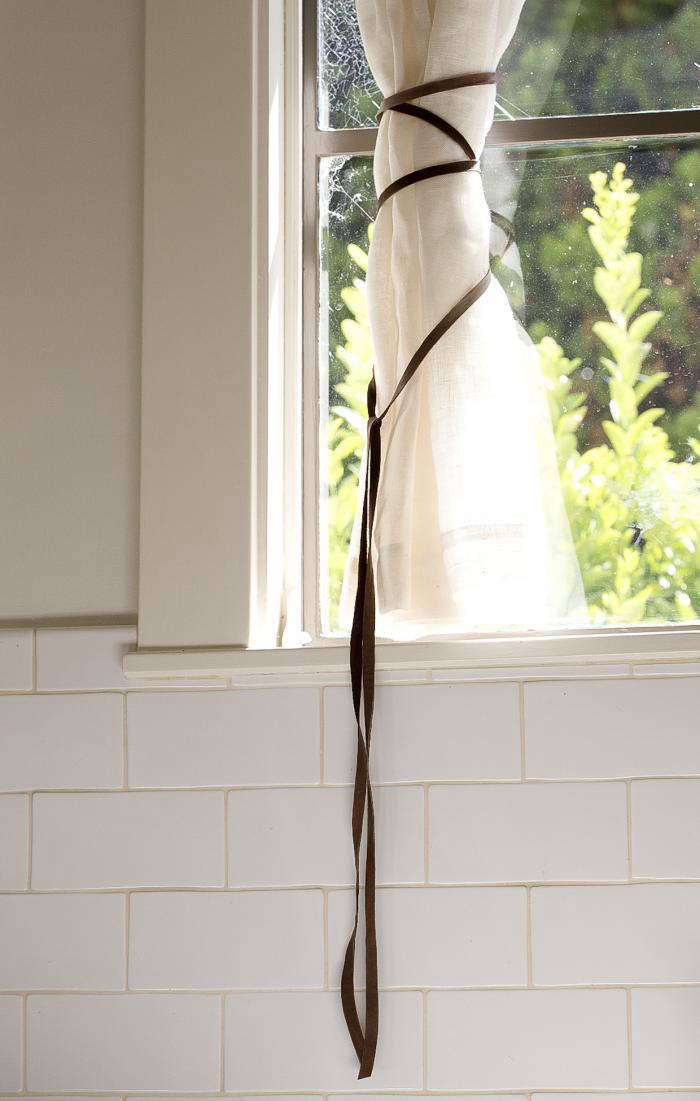 Above: A clever DIY solution: long leather ties function as curtain pulls in the kitchen. 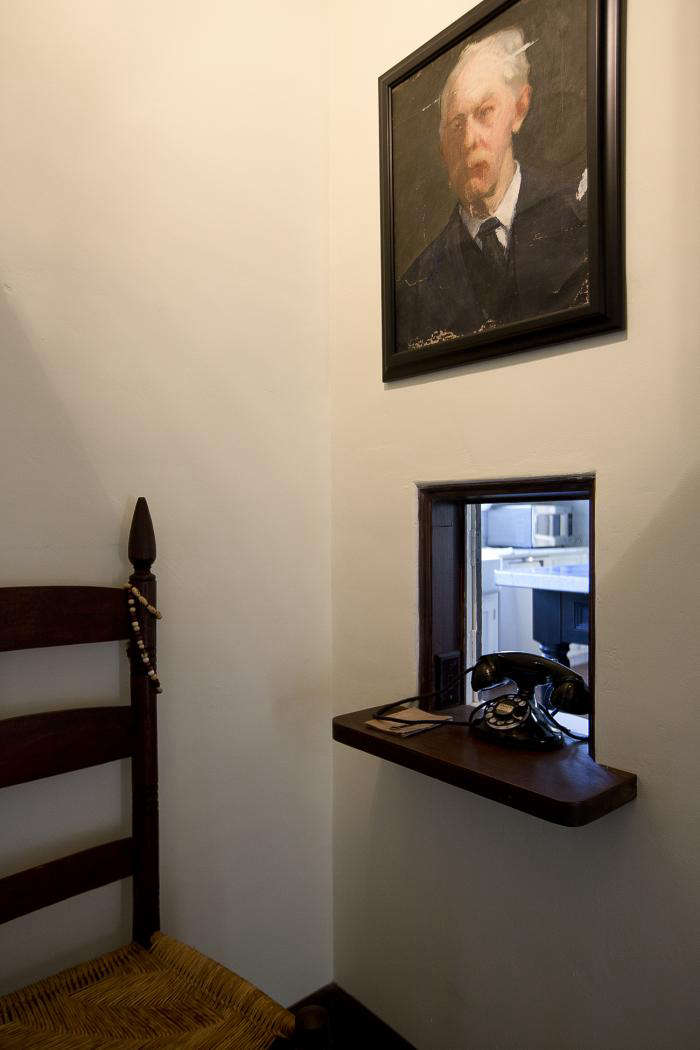 Above: A telephone nook connects the working kitchen to the hallway. 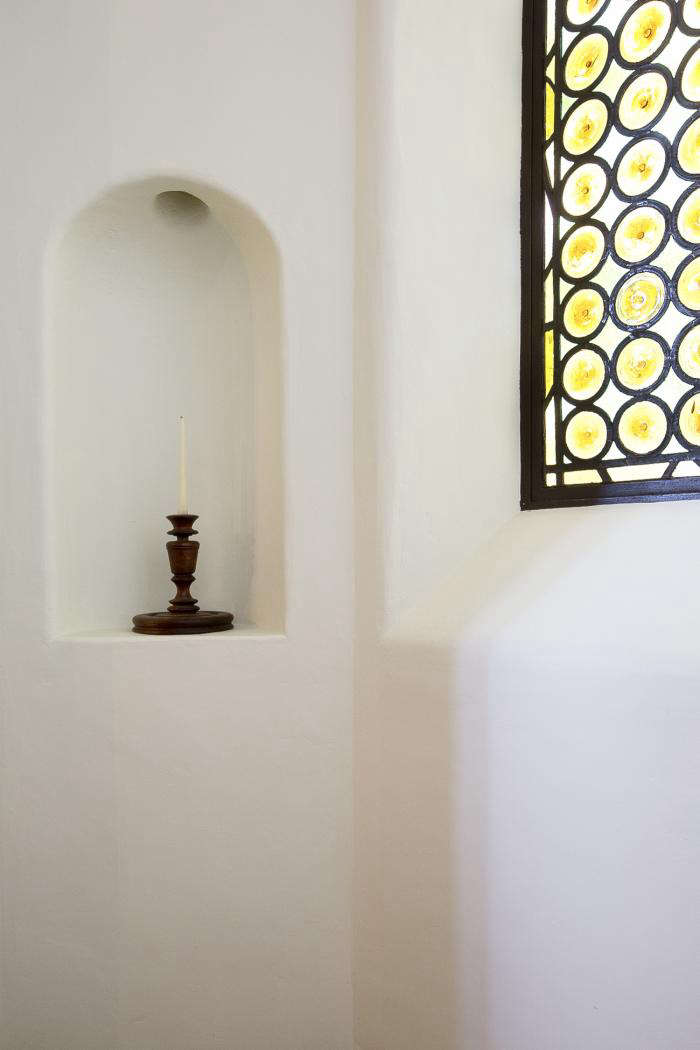 Above: Original stained glass windows filter light into the stairwell. 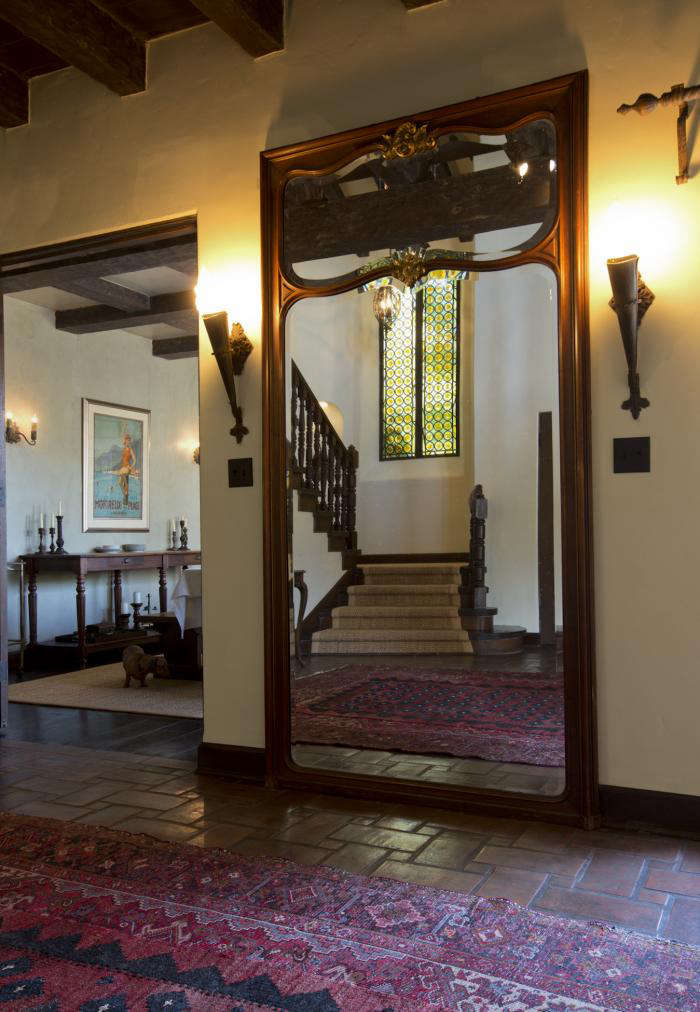 Above: A large antique mirror and original torch-inspired lighting in the foyer. 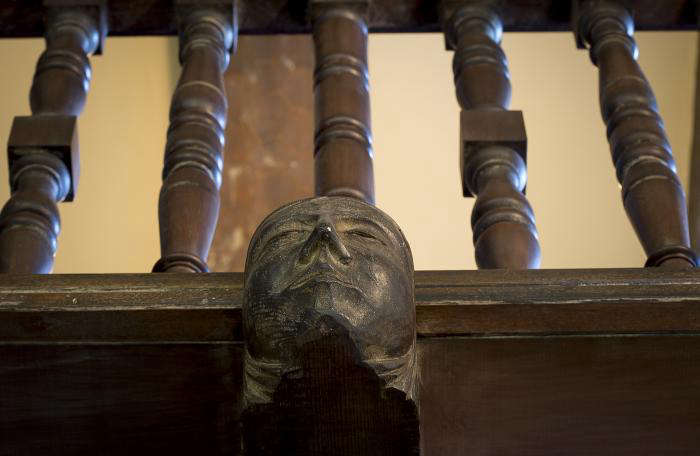 Above: Above the entryway is custom woodwork on the underside of the staircase. Shown here is one of two shepherd sculptures that sit next to their flock of sheep. 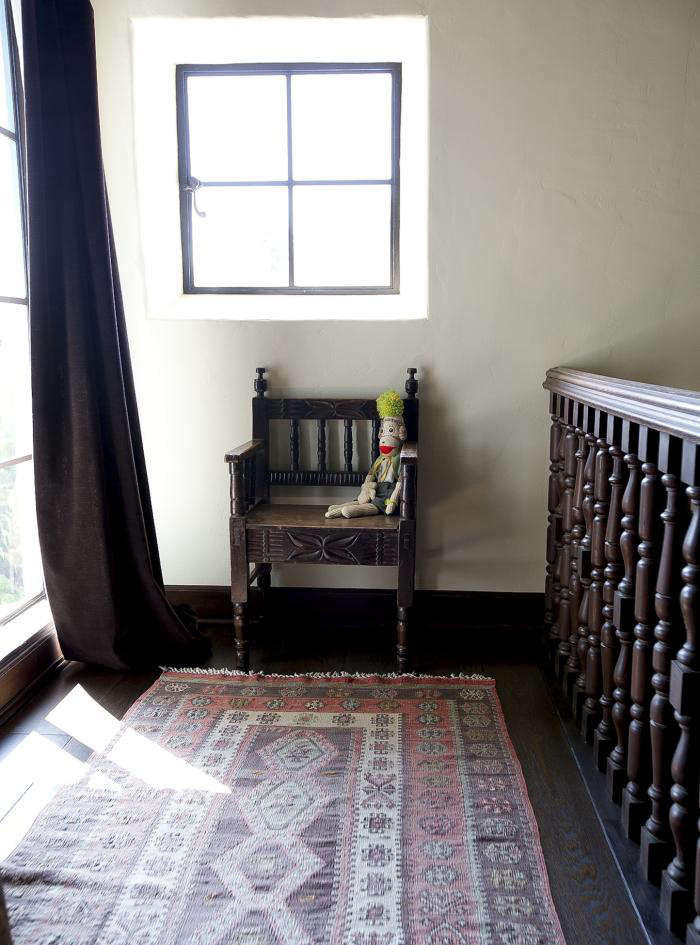 Above: A sock monkey sits on an antique chair along the stairwell. 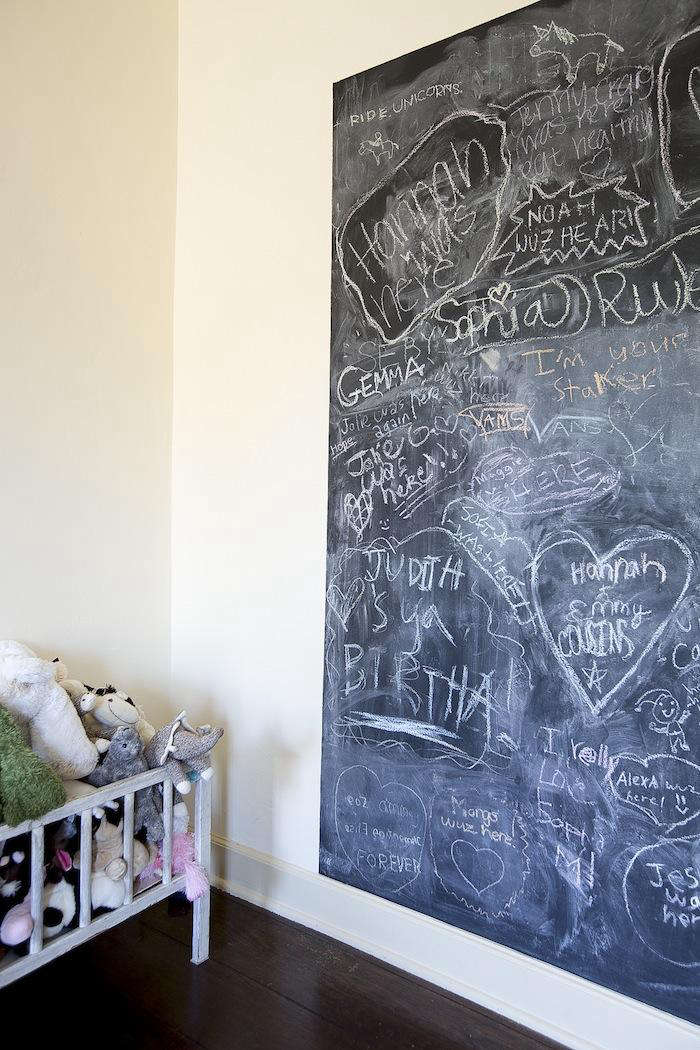 Above: A half-painted chalkboard wall in Kidson’s youngest daughter’s room. 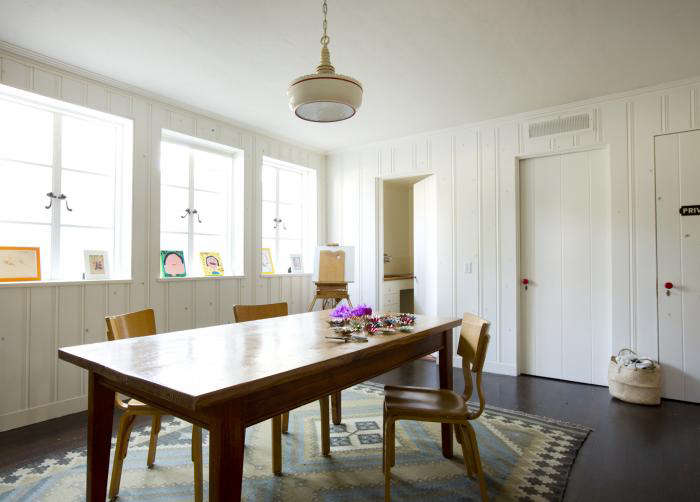 Above: A basement-level room that maintains its original function as an art room for Kidson’s daughters. Former owner Bush designed the room like a cabin; it was where she tumbled rocks and precious stones. The house was built with lightwells on the side to bring natural light into the basement. 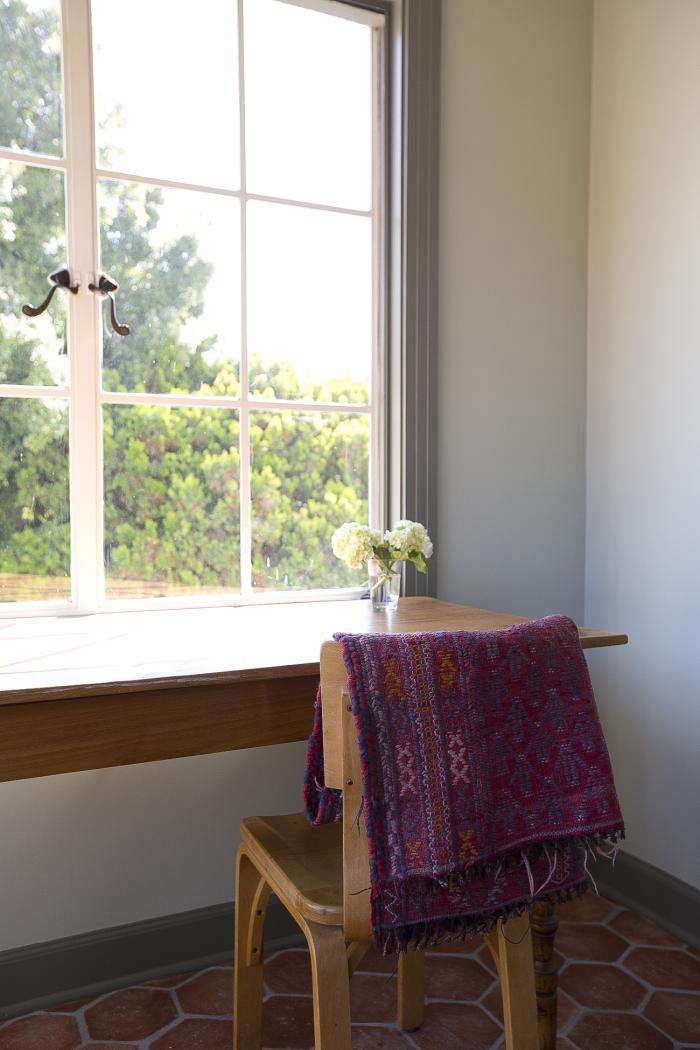 Above: A simple sunroom sits just off the master bedroom upstairs. 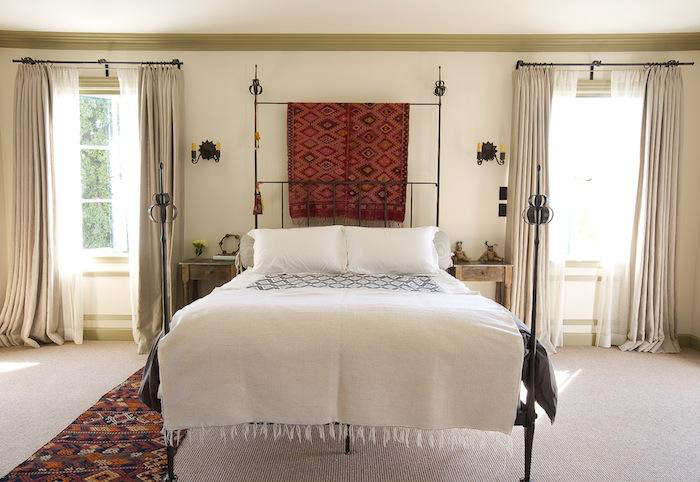 Above: An Anatolian woven rug hangs from a bed frame that is flanked by antiques: “I have a few things that are my favorite objects. You don’t need a lot of furniture—it’s the simple things that make me happy.” 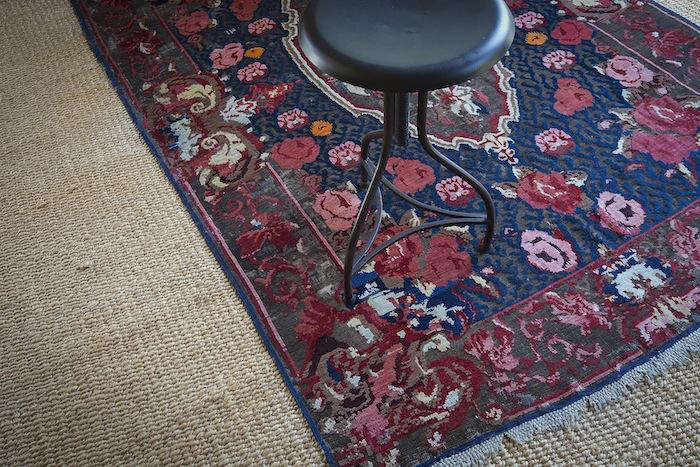 Above: Layers of textures come from Kidson’s collection of antique rugs from local flea markets and eBay. 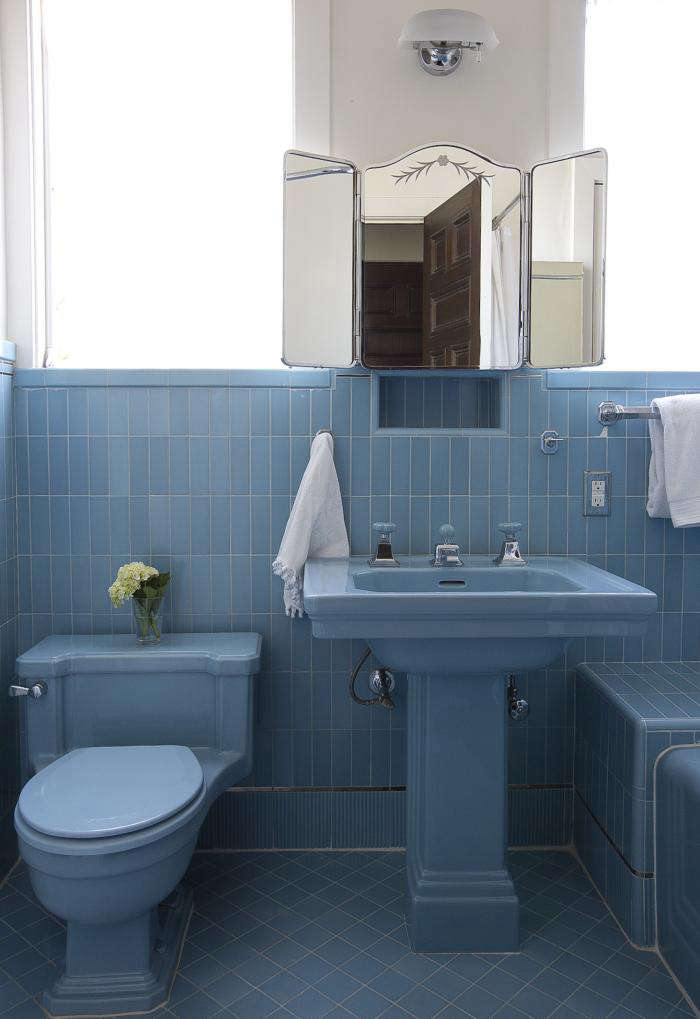 Above: Kidson preferred to maintain the original bathrooms by rechroming the mercury glass fixtures and hiring skilled plumbers to update the older pipes. 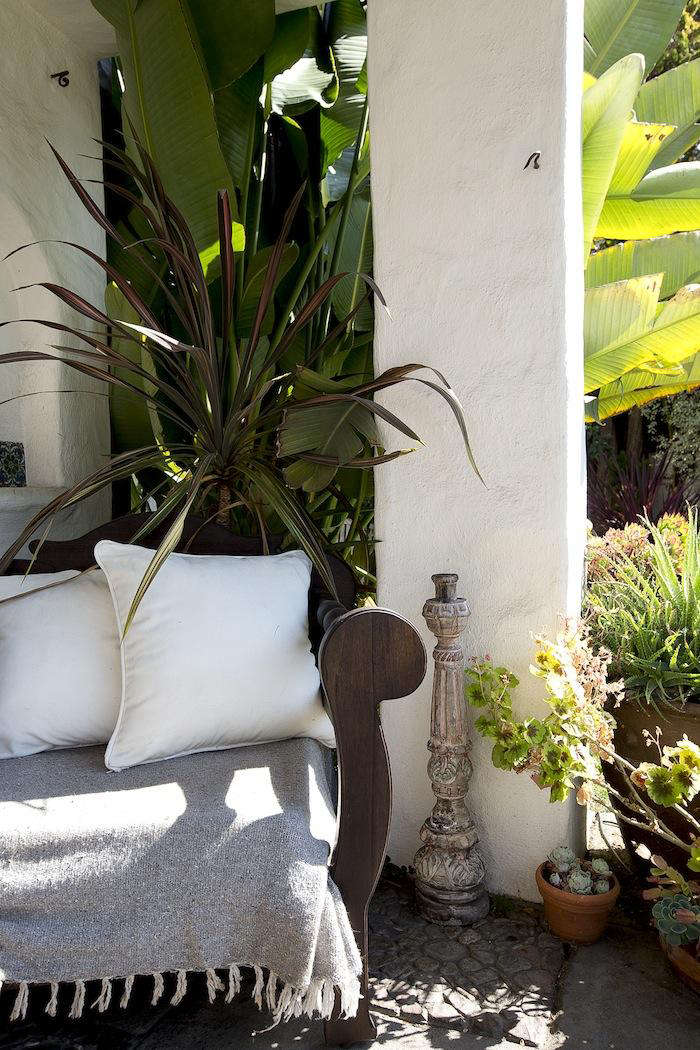 Above: A Mexican blanket covers an outdoor bench in the courtyard, just off the breakfast room.

N.B.: Like Kidson’s hacienda-style home? See 70 Spanish-Inspired Homes in our Gallery of rooms and spaces.