Our go-to Master of the Dark Arts when it comes to Halloween? That would be Claudia Schwartz—proprietor of San Francisco’s Bell’occhio—a sought-after SF stylist and shop owner who counts Martha Stewart among her fans. Claudia is a lover of the offbeat, and her last-century style (the way she spells Hallowe’en, for instance) has us inspired. Read on for her advice on creating a spooky yet soulful Halloween party; mastermix included.

Photography by Tom Kubik for Remodelista. 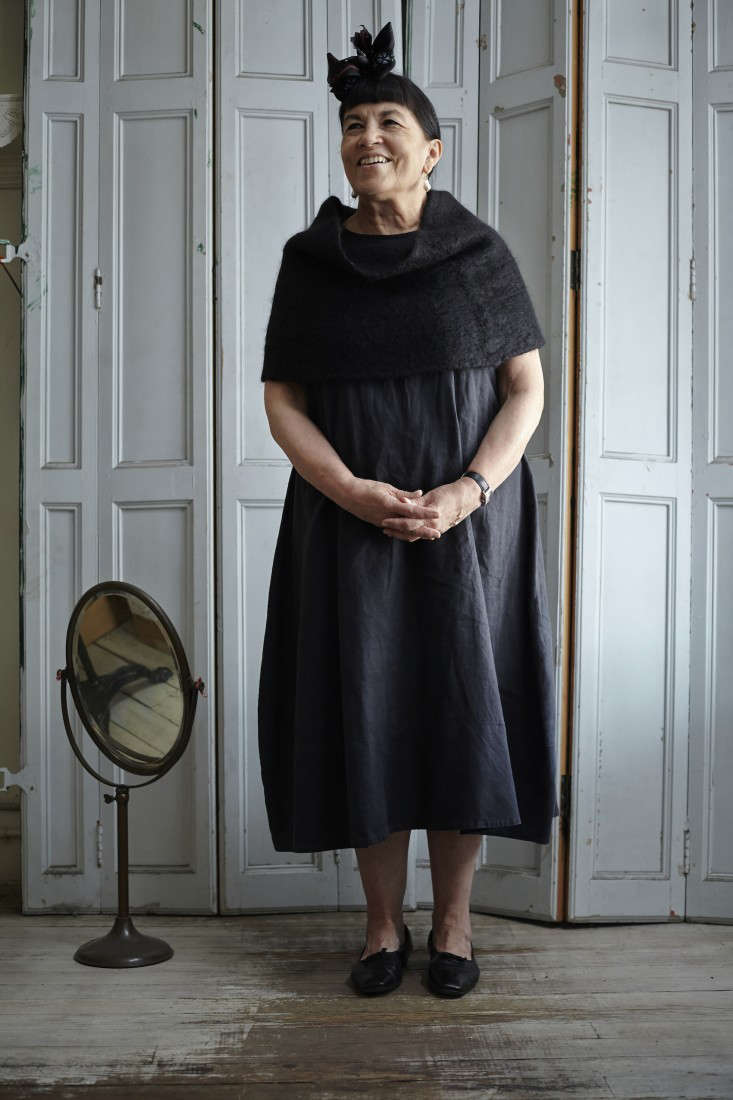 Above: Claudia in a dress and a shrug from Pip-Squeak Chapeau, in Brooklyn. Her usual daily uniform is a vintage hemp work dress, but here she is dressed as a Halloween hostess. Her pearl earrings are by her husband, Tom, who designs and makes the jewelry the couple sells at Bell’occhio.

Remodelista: Do you have any cardinal rules for a good theme party?

Claudia Schwartz: Create an atmosphere in which all the carefully edited elements support one another, from food and decor to music and scent. But exercise restraint; using every good idea that comes along can result in a mess.

RM: What are some Halloween decor ideas our readers can re-create at home?

CS: Start with a black table covering—whether it’s blackboard oilcloth or black linen—it makes a nice backdrop. For arrangements, I like oak leaves and acorns; if they are not available, seasonal leaves and herbs from a farmer’s market are nice. You could also do an all-orange theme, contrasted with dark chocolate cosmos, shiny black berries, small black calla lilies, and other very dark flora. The tableware can become the decor, too: serve soup in hollowed-out pumpkins, for example, as they do in Provence. 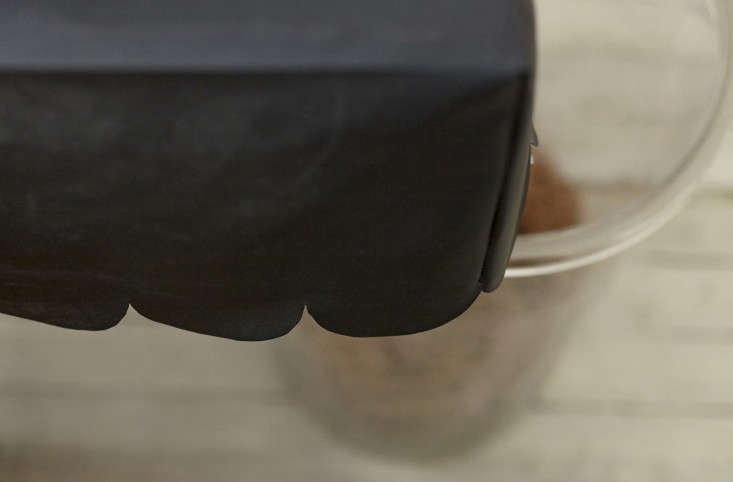 Above: Claudia uses Blackboard Oilcloth for the tablecloth; $16.50 per yard at Bell’occhio. She thinks it looks too informal when just draped over the table, so she had the tablecloth corners mitered and the edges scalloped. (I was impressed at how durable this material is: The oilcloth (shown) has served atop Bell’occhio’s shipping table for at least four years; it doesn’t show scratches and it wipes clean.) 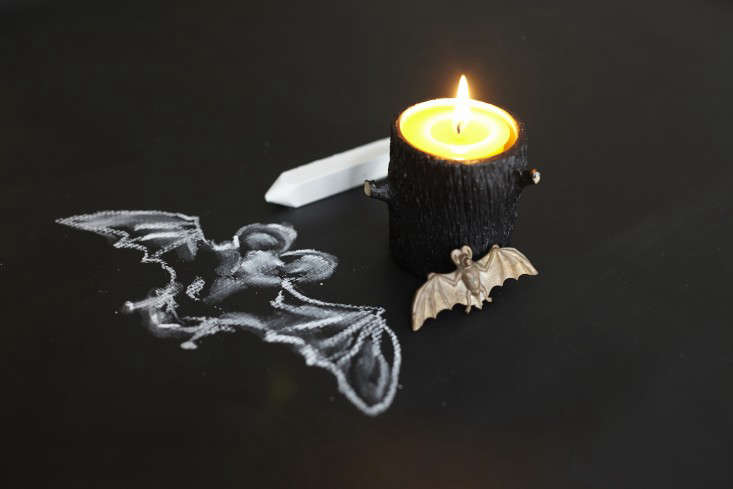 Above: Claudia sketched a white bat on the oilcloth using a piece of Reform Schule Chalk, very opaque and white, made in Germany; $5 at Bell’occhio. Next to the bats sits a Woodsie Votive, made in the workshop next door to the shop. The Woodsie votives, vases, “loglets,” and more are stocked in white, cream, and brown, but can also be painted to order. All the twigs jutting out from the Woodsie pieces were gathered from Brady Street in front of the store and workshop. The Woodsie line starts at $12 at Bell’occhio.

RM: How do you like to display name cards?

CS: Designating places with place cards makes seating less awkward for guests. I used lyre-shaped holders for a recent party, but you can improvise using twigs, moss clumplets, and other natural materials. 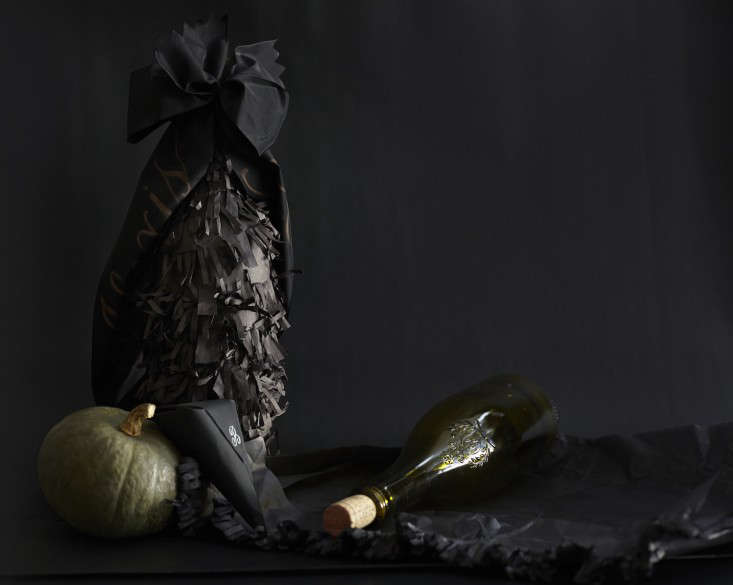 Above: Claudia wrapped a wine bottle in strips of black tissue paper that she ruffled using fringing scissors—she called this “dressing a bottle in a costume.”

RM: What tools and materials do you keep at the ready for making DIY party decor?

CS: A variety of scissors: fringing scissors (like our Fringe Benefits, $22, which can be used to mince herbs, too), pinking shears, and small sharp scissors—one pair for paper and one pair for fabric. And I always keep on hand Aleene’s Tacky Glue, little sticks for applying the glue, carpet tape, glue dots, and a circle cutter. 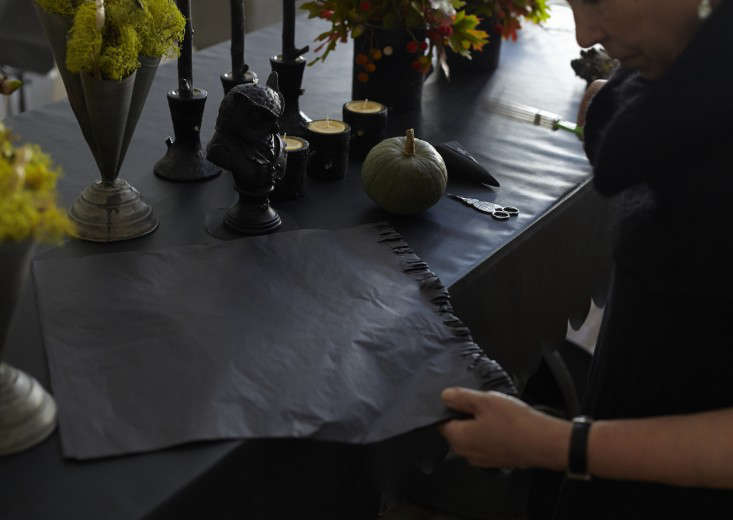 Above: Claudia uses Fringe Benefits scissors to create a ruffled edge on a stack of black tissue paper for her DIY “costumed bottle” (shown).

RM: What are good Halloween decorations for someone who doesn’t want to spend a lot?

CS: Mother Nature’s materials cost nothing. Plus, twigs, flowers, and moss can be composted after the party. 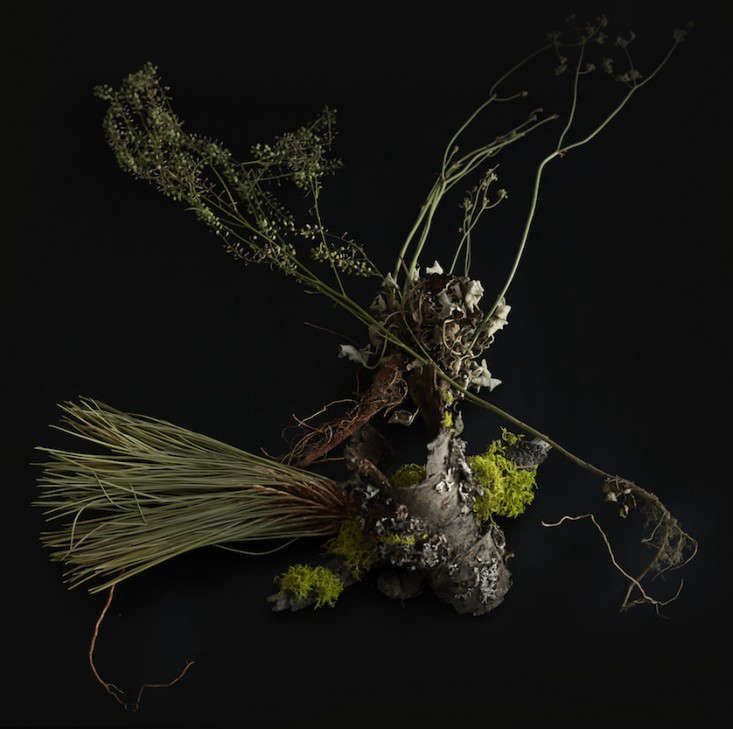 Above: Claudia enlisted a friend who was setting out for a weekend in Lake Tahoe to collect eerie-looking specimens during his ambles in the wilderness. He returned with a stash of dried treasures such as moss-covered bark and sugar pine needles. Several of his finds still sport their roots (Claudia asked him to pull out dead flora carefully, to keep their roots intact). To style these, Claudia suggests laying them out flat against a black background or incorporating them into arrangements alongside fresh flora. 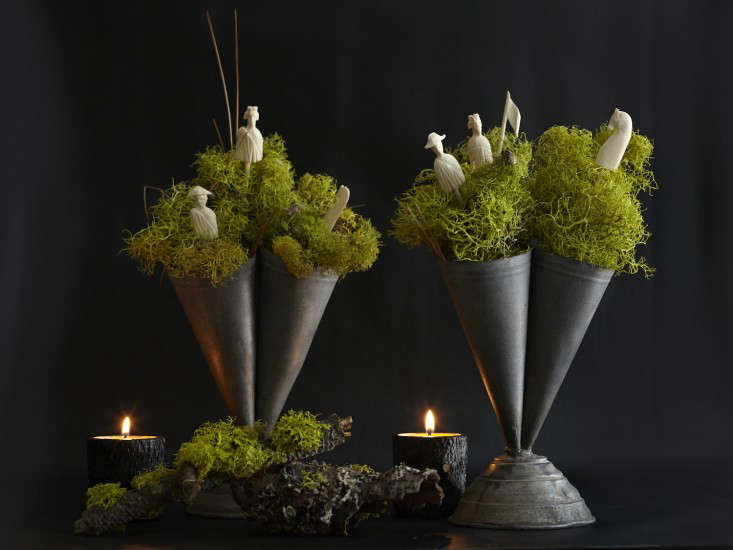 Above: To create a centerpiece, Claudia arranged dried green moss in antique French rose vases that she found in a flower market in Paris punctuated with vintage French gaming pieces made of carved bone. 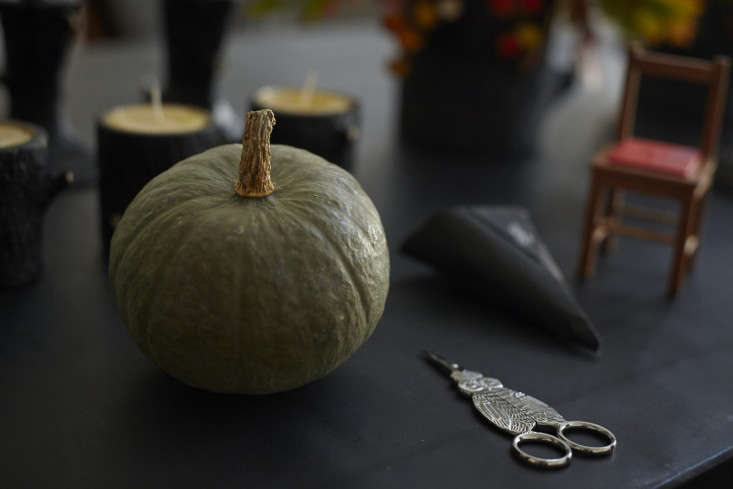 Above: A green kabocha squash from the San Francisco Ferry Building Farmer’s Market, and a pair of Little Owl Scissors—”because they’re cute”; $16 at Bell’occhio. 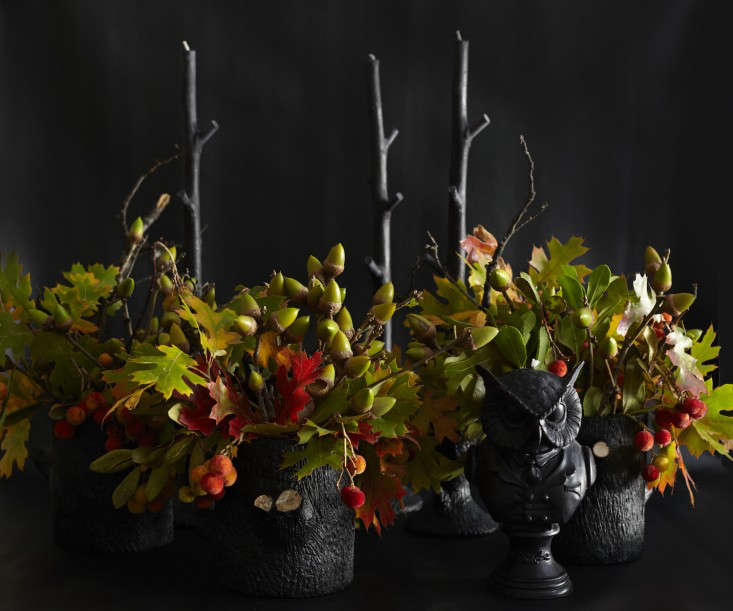 Above: Claudia filled black Woodsie Vases with oak leaves, acorns, and arbutus berries collected from nearby trees and the San Francisco Flower Mart. She didn’t bother using floral foam to anchor the arrangements; instead, she just cut the branches to size so they can stand up. “It looks better if they’re sort of wild and random,” she says. 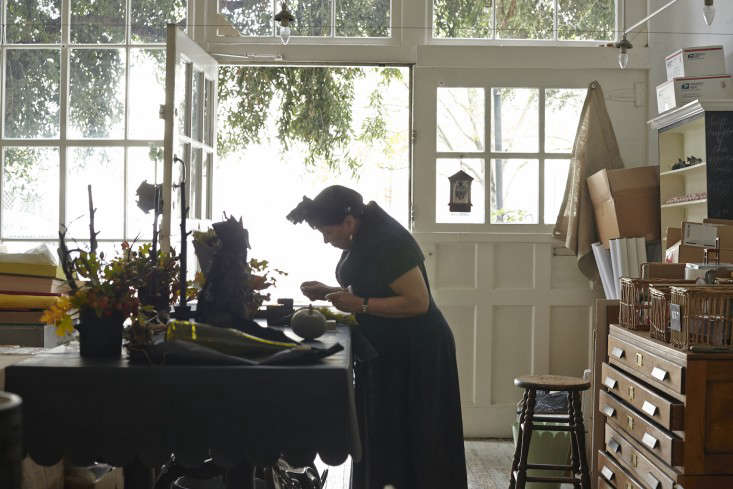 Above: Claudia at work in her studio, next door to the Bell’occhio shop, in San Francisco. 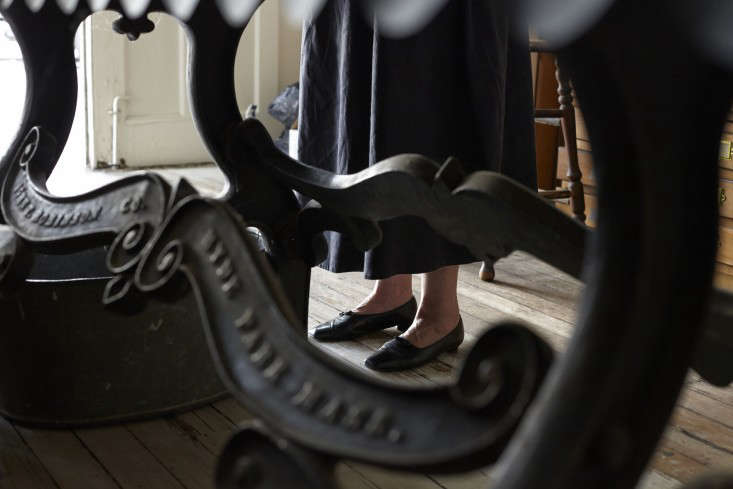 Above: Claudia’s bewitching black shoes are from Emma Hope, in London.

RM: How do you approach music for a party?

CS: Music is essential for evoking atmosphere at a party—if it doesn’t interfere with conversation, and if it’s seamless and you’re not jumping up and down to change the record. At a Japanese-themed birthday dinner for my husband, I found obscure recordings of Japanese court music, samisen, Buddhist chants—and a friend brought a Japanese nature CD that included the sounds of cracking ice at a shrine. At store parties, we’ve had music as diverse at Dennis James playing the glass harmonica and a trio of musicians playing alpenhorns and small alpine accordions.

RM: What would you suggest for a Halloween party playlist?

CS: I’m always in search of unusual music for the shop and for parties. The first thing that comes to mind for Halloween is the sound of the theremin, an instrument that produces wavering, eerie, otherworldy sound. That would be perfect. I’d find recordings or a theremin musician. I’d also look for unexpected music such as the following:

RM: What would you serve for a Halloween dinner party dessert?

CS: I’m crazy about soufflés—I’d probably make pumpkin soufflés in individual ramekins, or maybe oeufs a la neige (snow egg meringues). The meringues are ghostlike, light and ethereal, served in little pumpkins or classic black espresso cups. With all that candy around, a heavy dessert isn’t so appealing. 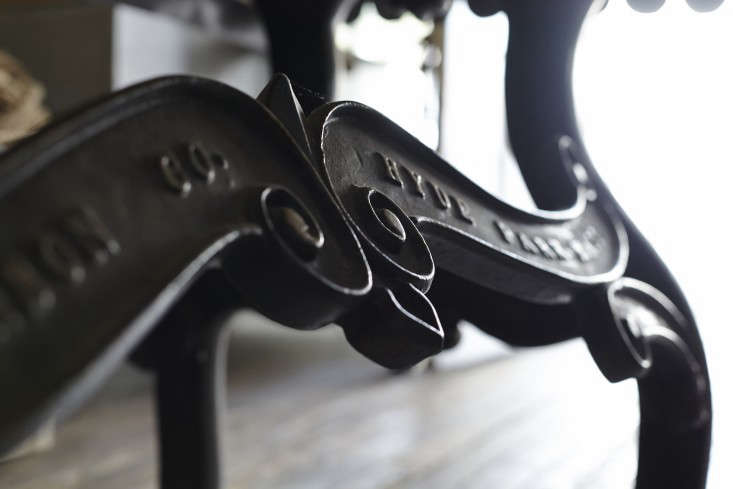 Above: Claudia’s dramatic black iron table base is actually the base of an antique cardboard box folding machine. She acquired it from a friend, owner of now-shuttered the Everything Shop, in San Francisco. The proprietor wasn’t initially keen on parting with the table, but once he came to understand Claudia’s aesthetic sensibilities, he knew it would be a perfect fit for Bell’occhio.

RM: Last question: What is your favorite holiday?

Read more about Bell’occhio in Paris by the Bay: Bell’occhio in San Francisco, and seek and find more advice in Expert Advice: Coffee Tips from Alice Gao.

Object of Desire: Once Milano x Liberty of London

Kitchen of the Week: A New Zealand Blogger’s $600 DIY Remodel