When we heard that Bay Area photographer Aya Brackett was heading to Tokyo, we knew she’d be dropping by her friend Yuri Nomura’s cult restaurant Eatrip, so we asked her to capture it for us. Nomura, who refers to herself as a food director, is also a chef, writer, film director and radio host, not to mention tastemaker. Hailing from a food background–her mother teaches cooking and her father owns an organic farm–Nomura studied cooking in London and later did a stint at Chez Panisse, but her culinary interests extend far beyond preparing delicious locally, organically, and sustainably sourced food. Her real passion lies in exploring the intersection between eating and everyday living, and in understanding the ways in which food unites us. These topics are the subject of Eatrip, her 2010 documentary, and are part of the ongoing discussion at her canteen, which has all the casualness and comfort of a home, much like the food on offer. 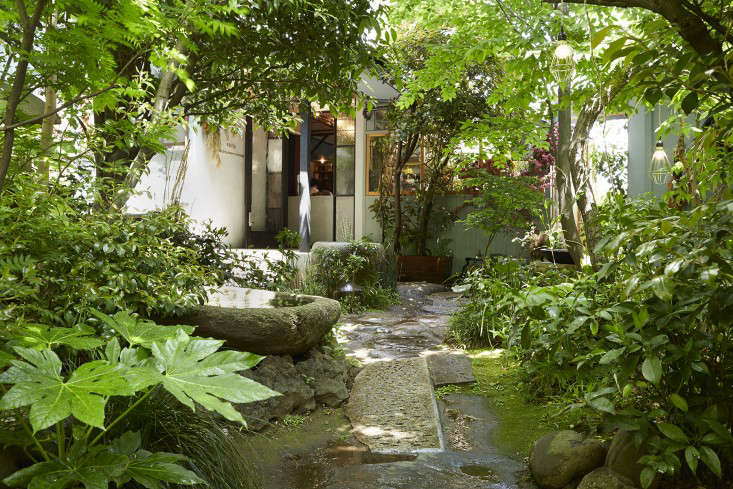 Above: An oasis of calm hidden away off a side street in the middle of Tokyo’s bustling Harajuku district, Eatrip–a conflation of “eat” and “trip”–is surrounded by gardens. Adjoining the restaurant is The Little Shop of Flowers, run by Nomura’s friend Iki Yukari, who sells flowers and handmade gifts. (Watch for the Little Shop of Flowers on Gardenista.) 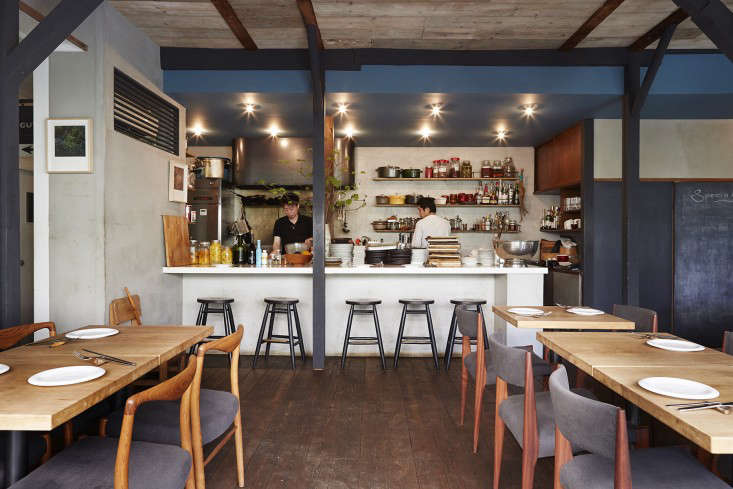 Above: With its darkly painted wooden beams, the restaurant has the feel of a Japanese farmhouse–one with a modern sensibility. 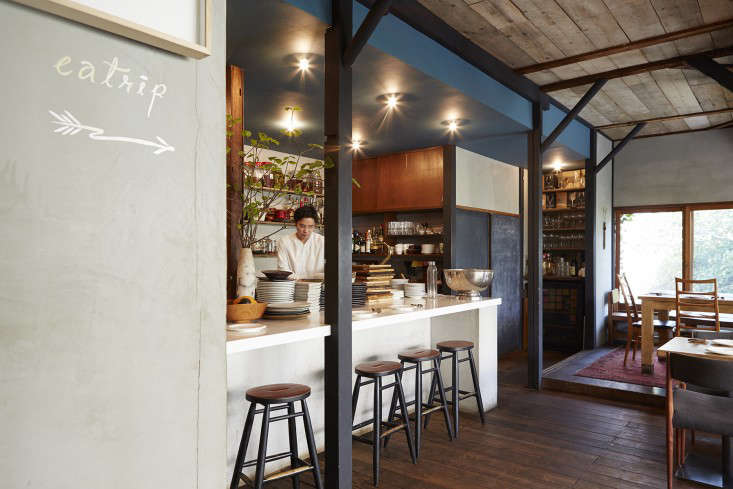 Above: Eatrip was designed by a friend of Nomura’s–she often works with friends in her endeavors–and is layered in different woods, blonde on the ceiling and dark-stained on the floor. The look is rustic, weathered, and comfy. 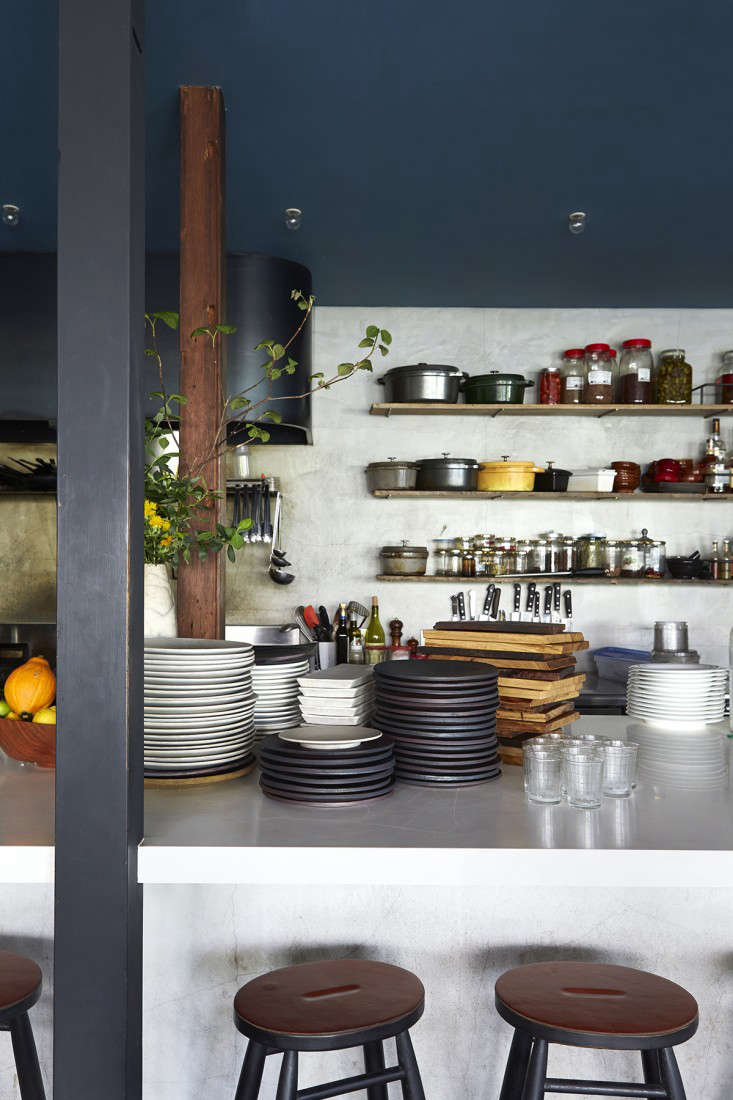 Above: Open wooden shelves line gray plastered walls. All elements, from food to tabletop to furnishings, come into play at Eatrip. Nomura says she learned the art of creating a casual but carefully considered approach to dining by haunting the Conran Shop when she lived in London. On her return to Tokyo, she cooked for the cafe at Idée, Japan’s take on the Conran Shop, and honed her aesthetic. 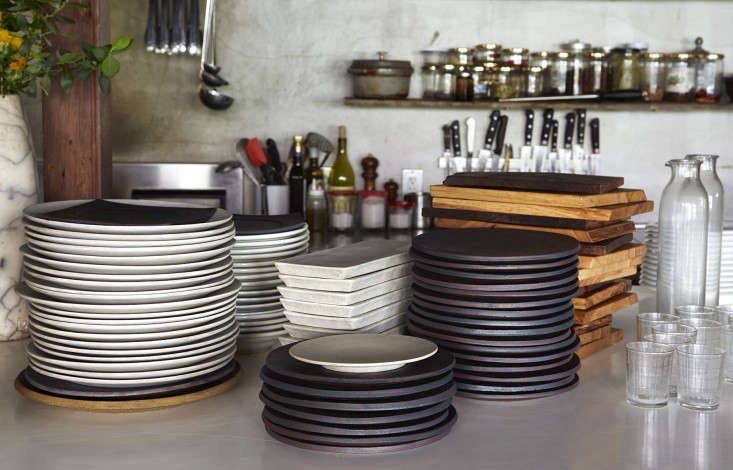 Above: Piles of dishes and planks of wood for serving food sit in view on the counter, ready to be used. 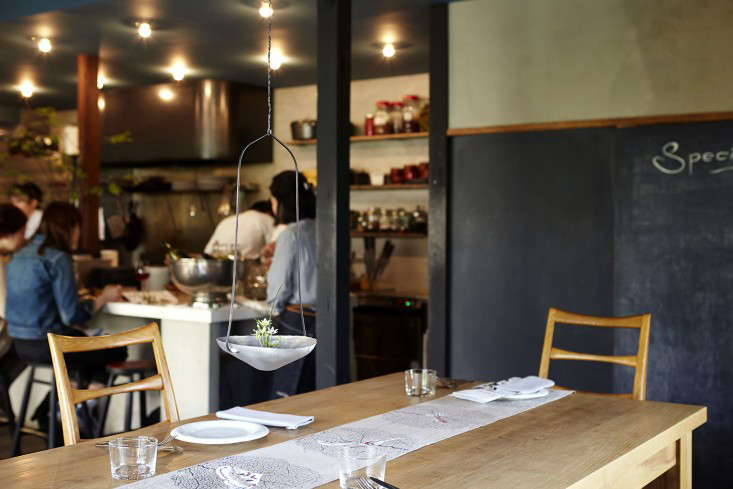 Above: A planter is suspended inches above a table with a simple cotton runner. Nomura collaborates with Yukari of the Little Shop of Flowers on the restaurant’s arrangements. 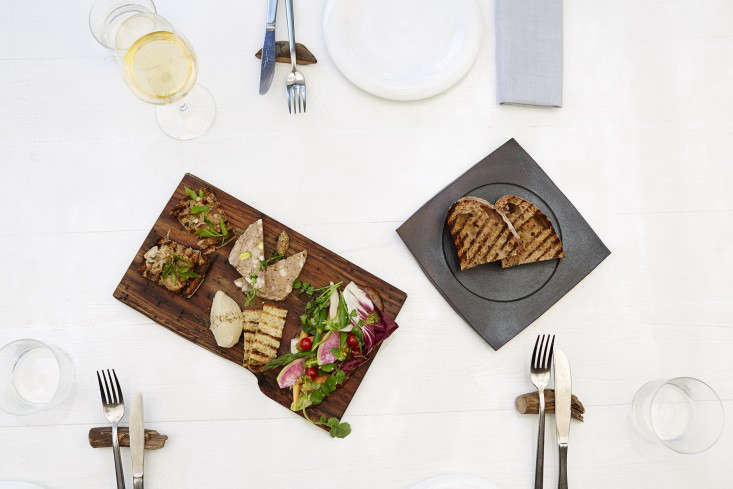 Above: Nomura sources her ingredients for Eatrip from organic farms, including her father’s. 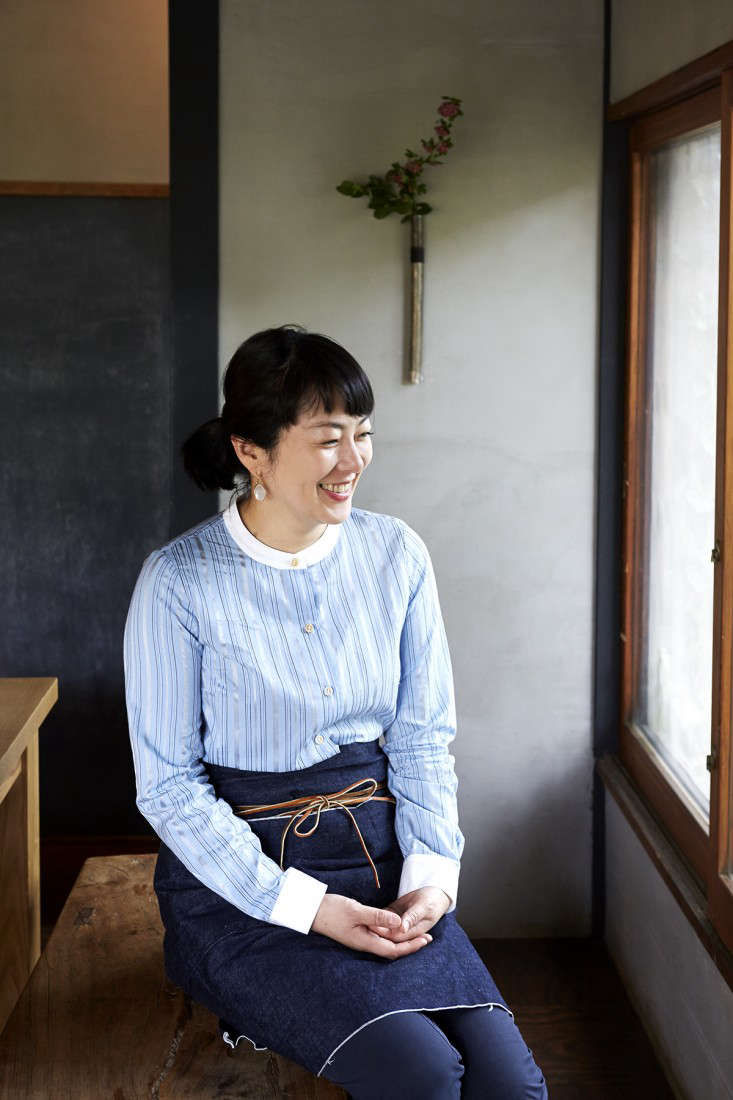 Above: Nomura in a denim apron designed by her friend Matt Dick of Small Trade Co. and custom-made for Eatrip. The aprons are sold in the Little Shop of Flowers where many of the small artisan goods are the work of Nomura’s cohorts. 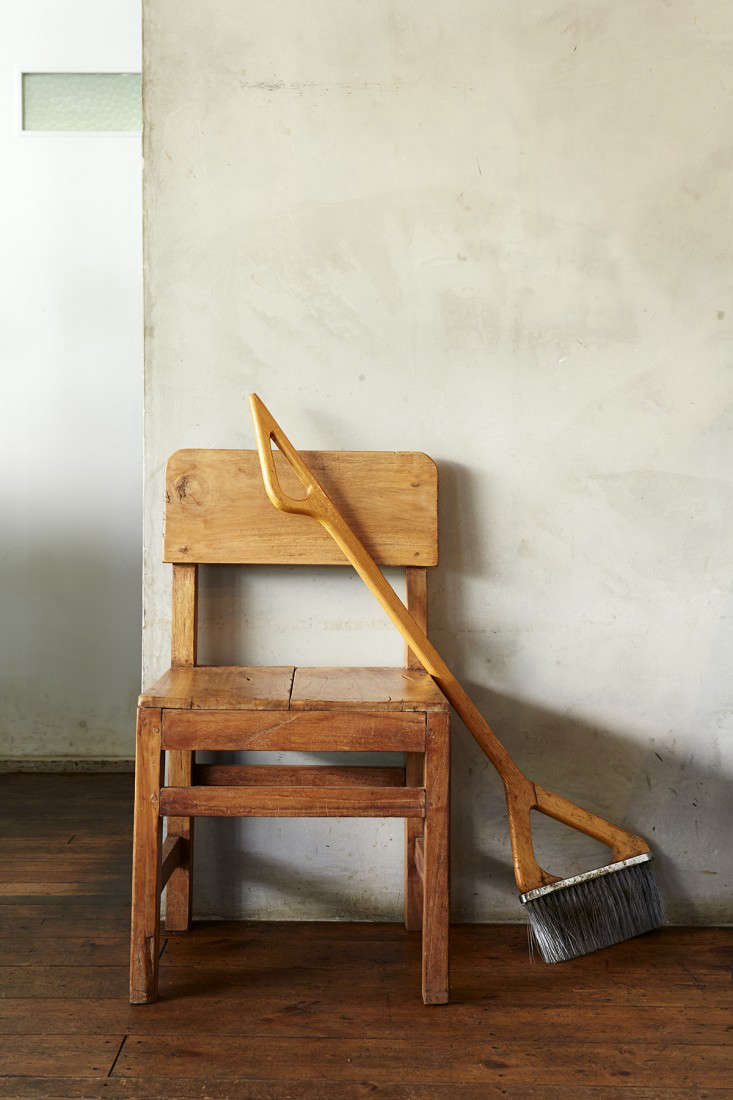 Above: A compelling rustic pair. 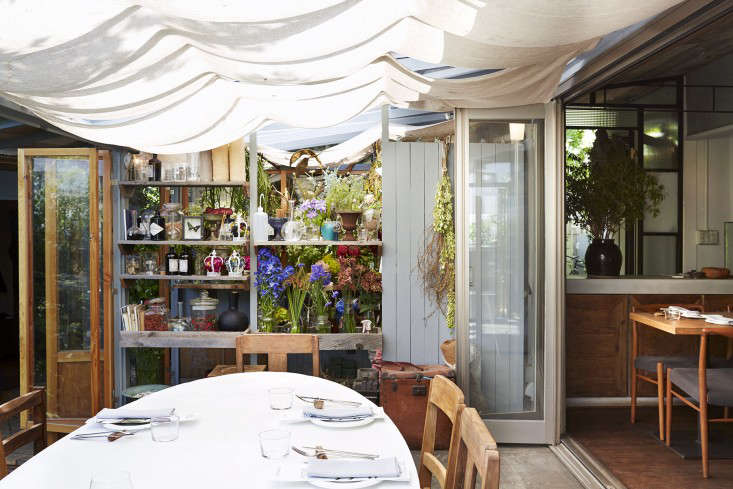 Above: The Little Shop of Flowers displays create a lush backdrop for the tables on Eatrip’s terrace. 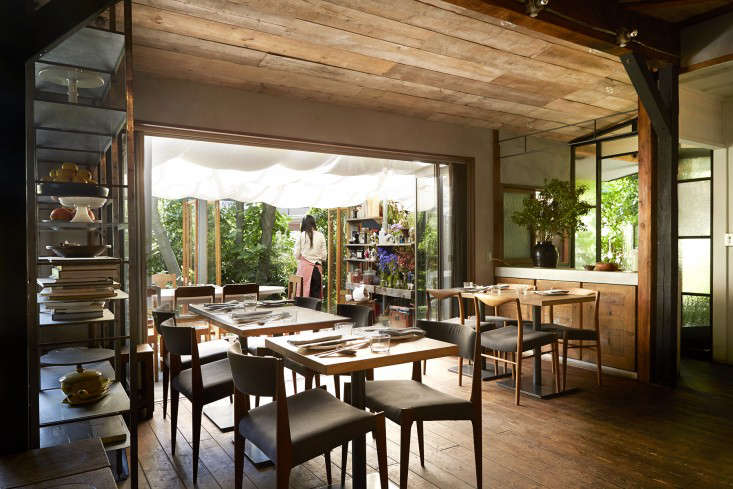 Above: The covered terrace overlooks the garden. 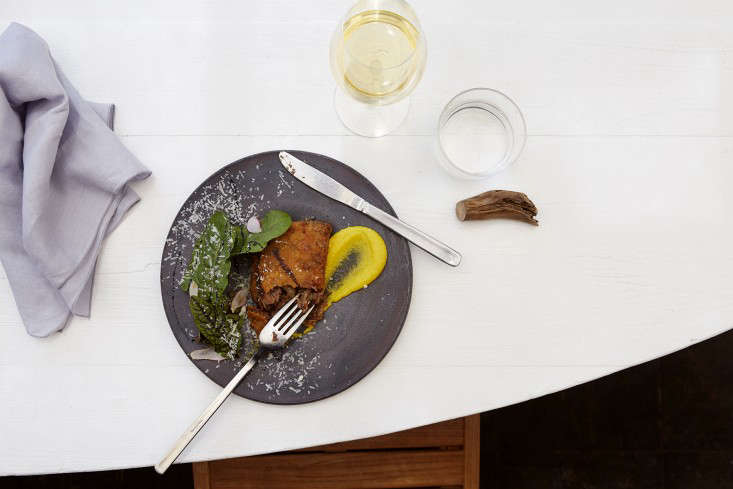 Above: Nomura’s pursuit of the organic extends to Eatrip’s wine list, which includes offerings from Scribe, the Sonoma-based winery owned by the Mariani brothers. Heading to Sonoma? Don’t miss our post on the Haute Bohemian Scribe Winery. 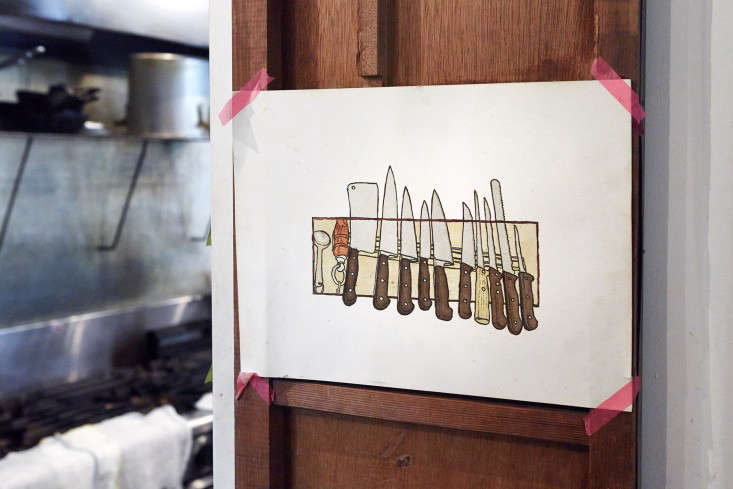 Above: Diagrammed order in the kitchen. 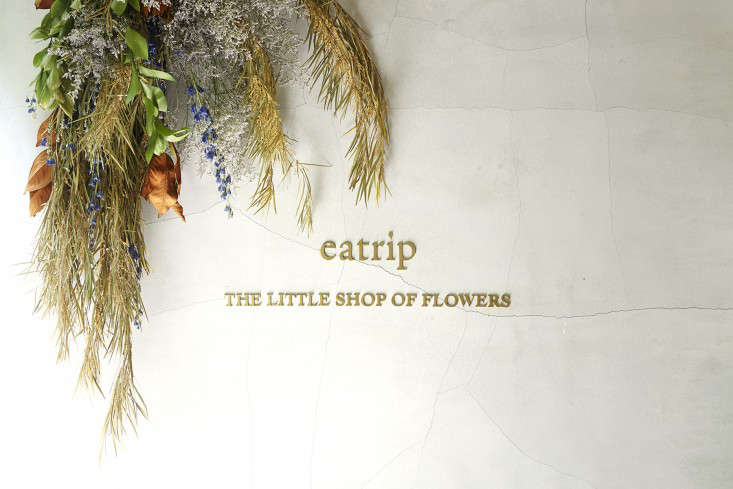 For more on the restaurant and Nomura’s other projects, go to Eatrip and Babajiji.

Have a look at Idée, where Nomura previously worked, in our Shopper’s Diary. And to get your hands on an Eatrip denim apron, go to Small Trade Co. Where else to visit in Tokyo? Check out our Guide to 10 Cutting Edge Cafes, Shops, and Restaurants.

Have you cast your vote today for the 2014 Remodelista and Gardenista Considered Design Awards? You can vote for the finalists of your choice every day until August 8; we’ll announce the winners on August 9.

Vote for the Best Office in the Remodelista Design Awards 2014: Professional Category