The first kitchen we had, when my husband and I were newlyweds, was about half the size of our current bathroom. It had room for a sink, a placemat-sized workspace, and a four-burner stove that was one cut above an Easy Bake oven. I could roast a 12-pound turkey in it. Unstuffed.

I’ll say this about that kitchen, though: every inch of it was used. And shortly before we grew out of the house, we were able to install a built-in dishwasher, a luxury that came with a doubly high price because it diminished our storage space by half.

I thought about this the other day when my husband was rooting around in the great, unexplored Northwestern territories of my freezer. “Do you have any idea what this is?” he called, waving around a frozen block of something that could have been a stew, a tomato sauce, or a woolly mammoth.

Photographs by Liesa Johannssen for Remodelista. 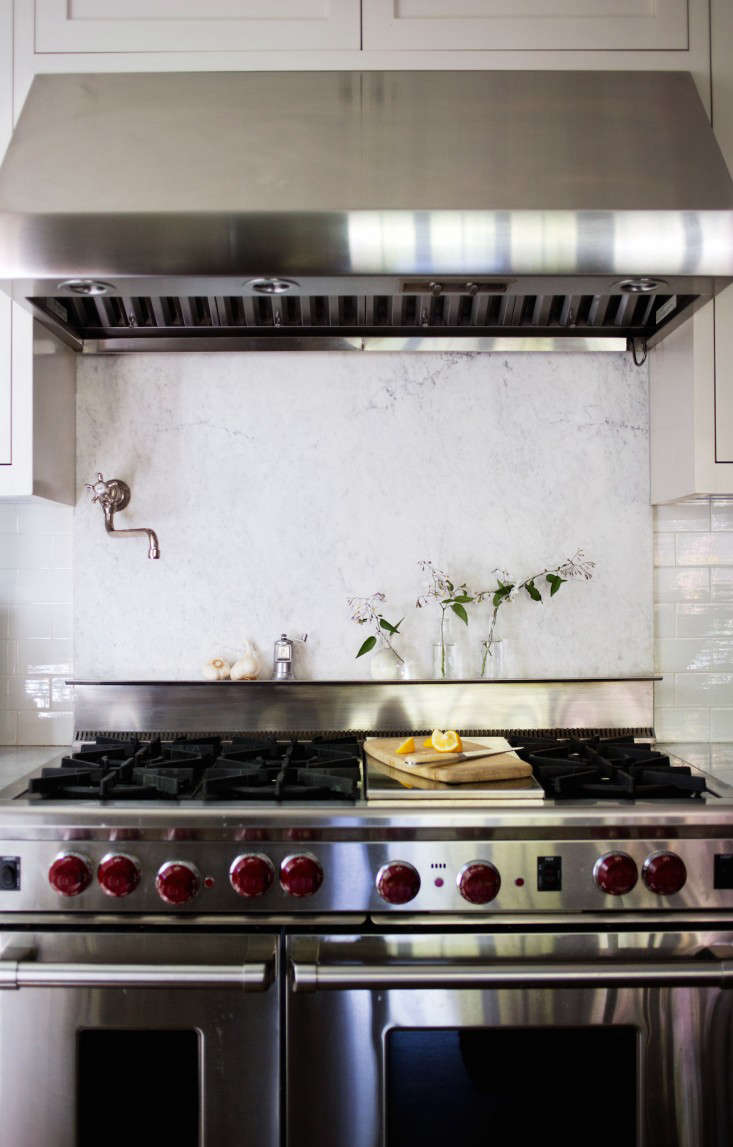 Above: My Wolf range with impractical marble backsplash.

I barely heard him from the other end of the kitchen, where I was bent over the giant Wolf stove, retrieving a broiler pan from the side-by-side garage we call the oven.

It is a beautiful kitchen, with marble and nickel and a weathered barn-door table that sits on a Persian rug. And we use it all the time. Which is the problem.

When I designed this kitchen, for inspiration I relied on a big pile of tear sheets of beautiful photos from magazines and websites–pictures of kitchens that looked like no one ever cooked in them. What I didn’t realize was that no one did.

These days there are two kinds of kitchens: kitchens that get used and kitchens that don’t. I wish I had known this before I remodeled mine.

Instead? I created a stage set rather than a workspace and now I spend half my time removing stains from porous marble and trying to hide my mismatched coffee cups from view.

It’s a common problem. “Blame the Pinterest effect,” says Alexandra Lange, a Brooklyn-based architecture critic. “People look at pictures of high-end kitchens and think theirs need to look the same. But those photos should have a disclaimer that warns ‘This is an unused kitchen.’” 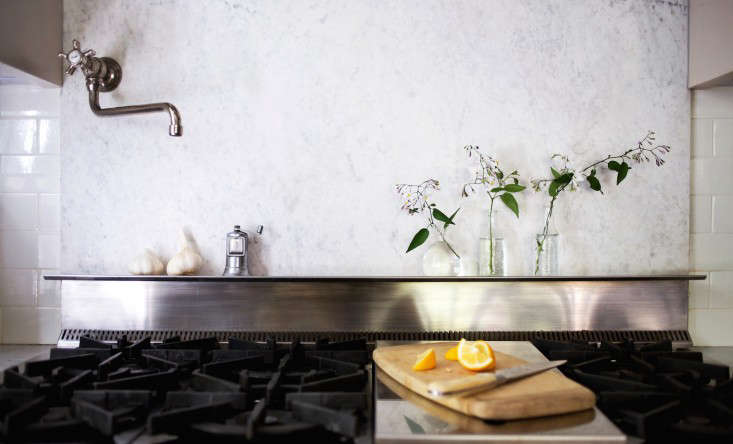 Above: To guard against stains, I installed a 3-inch-high strip of stainless steel.

Blame the trend on the 1950s. That’s when kitchens began to evolve from humble workspaces–for preparing meals and washing dishes–into bloated rooms with identity crises. The first indication of trouble, says Lange, was the pass-through window to connect the kitchen to other rooms in the house.

“After the pass-through came the breakfast bar, which turned into the giant island with stools that sit two feet away from a kitchen table. The different uses of these redundant spaces became mysterious and led to the fragmentation of the meal as an idea,” Lange says. “Nowadays people say, ‘Why should I cook a turkey when I can buy a cooked turkey at the store and just take it out of the refrigerator to eat at one of these stations’ instead of having a meal together at a table. “

These days, there are unused kitchens with fancy appliances that look new, stainless sinks as shiny as the day they were installed, and open shelving that holds museum-worthy displays of carefully arranged dishes.

There’s nothing wrong with that, of course. Some people don’t like to cook. Others use their beautiful kitchens as extensions of their living spaces, outfitting them with sofa, fireplaces, and oil paintings. Says kitchen designer Susan Serra, “Kitchens as living spaces has become the overarching trend in recent years, in fact in the past 20 years but with an extra strong push since 2008.”

In fact, “a designer can get great enjoyment specifying materials for a kitchen that is mostly unused,” says Serra. “Exotic marbles (carefully sealed, of course), wood surfaces, metals for countertops such as a very thin semi-polished stainless steel, concrete countertops, and pristine white cabinetry are a joy to work with.”

But in a kitchen like mine where roasting chickens and bubbling tomato sauce and acidic lemon juice all routinely splatter surfaces, I learned the hard way that it is not a good idea to have a porous marble backsplash or countertops. 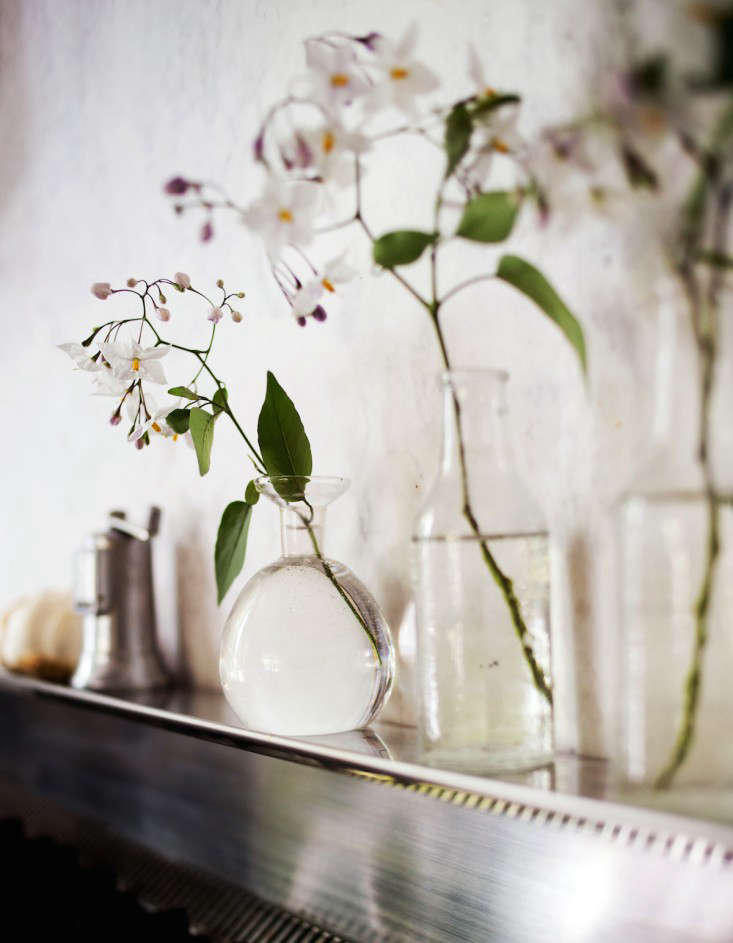 Above: My new stainless steel ledge doubles as a display shelf.

Luckily, I figured out a simple fix for the backsplash. We installed a 3-inch-high strip of stainless steel behind the stove to divert grease–and that stopped the staining. For the countertops? I have made my peace with the etching from blotches of lemon juice and will even go so far as as to tell people, “Imperfection lends character.” Some days I even believe that.

But if I were to do it all over again? The next kitchen I design will be impregnable. It will have a stainless steel backsplash that covers the entire wall behind the stove, and the countertops will be made of kryptonite (as that appears to be the only surface truly impervious to wear). The Persian rug can stay, though; the pattern hides stains.

Want to know more about removing stains from marble? See My Dirty Secret: Or How I Learned to Live with a Marble Backsplash. See more of Michelle’s weekly columns in our Domestic Dispatches archives.

Kitchen of the Week: Going Big with Color in a Small Space