This overhauled Berkeley, California, houseboat is a lesson in how to get maximum value out of a remodel–on land or sea.

The three-story vessel was built in the 1960s and subsequently “cobbled together over three decades by a tinkerer owner.” Originally a two-story cabin on wood pontoons, the house later received a concrete hull with a basement that sits about four feet under water. By the time Berkeley architects Medium Plenty arrived, the structure’s chaotic layout included tiny disconnected rooms, hidden water views, and buried architectural details.

Client Zack Canepari, a photographer and filmmaker, wanted to undertake a major cleanup–including removal of load-bearing walls and the introduction of new glazing–all for less than $150 per square foot. But lucky for Medium Plenty, he was the perfect client for the challenge. Says project architect Sky Lanigan: “Zack got a lot of design out of his budget because he was willing to work with the shaggy dog nature of the boat, embracing the possibilities of affordable materials, so the money could go into carefully considered details rather than marble and high-end appliances and smoothing out every rough spot.”

According to Lanigan, much of the design was about “leveraging the interesting qualities” of the readily accessible, including plywood (for flooring), denim (as upholstery), laminate (on the counters), and wallpaper (ordered via Amazon and applied as a mural). Medium Plenty also introduced built-in woodwork and furnishings throughout, and was able to minimize costs by relying on a competent contractor rather than a speciality woodworker. “The idea was, if the general contractor’s crew can’t do it, simplify it.” They credit contractor Bryan Moore with finding creative ways to keep expenses within reason, and laud Canepari for embracing unorthodox suggestions–and for being willing to “troubleshoot problems with no off-the-shelf solutions.”

Photography by Melissa Kaseman, except where noted. 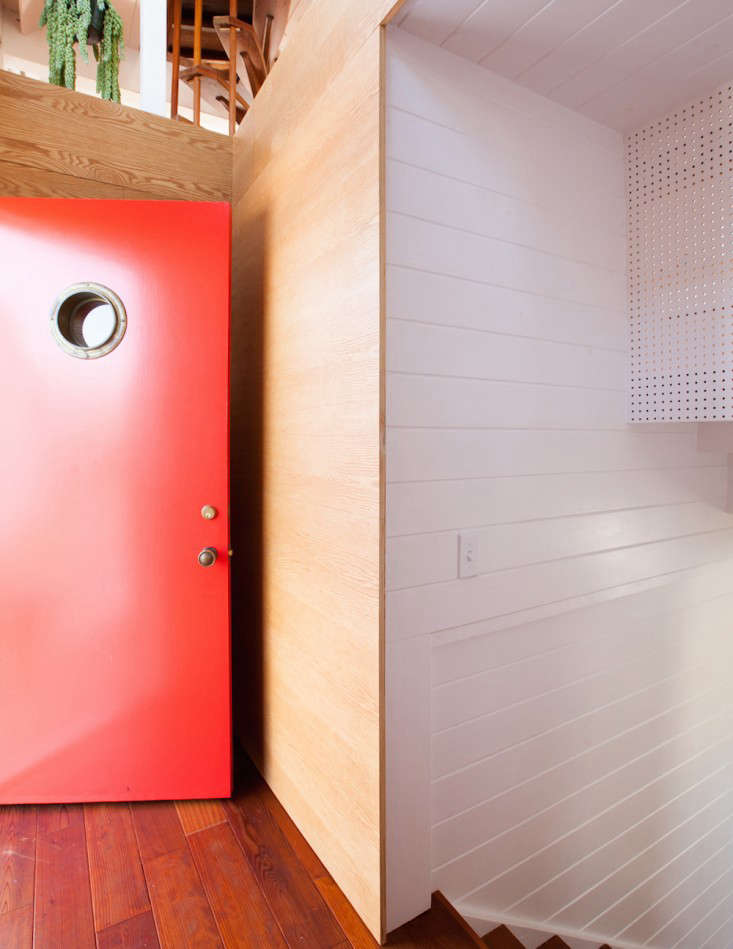 Above: From the dock, the front door opens onto a small landing. Half a flight upstairs is the open kitchen, living/dining room, and den. Half a flight downstairs is a photography studio, utility room, and guest bedroom.

The architects found a vintage brass porthole stored in the basement shower and repurposed it as the front door peephole. To connect the entry with the main living space, they used white-painted pegboard as on the stairwell bulkhead. Light streams from the kitchen through the pegboard, and in the kitchen, the unfinished side of the pegboard is used for hanging cooking tools. 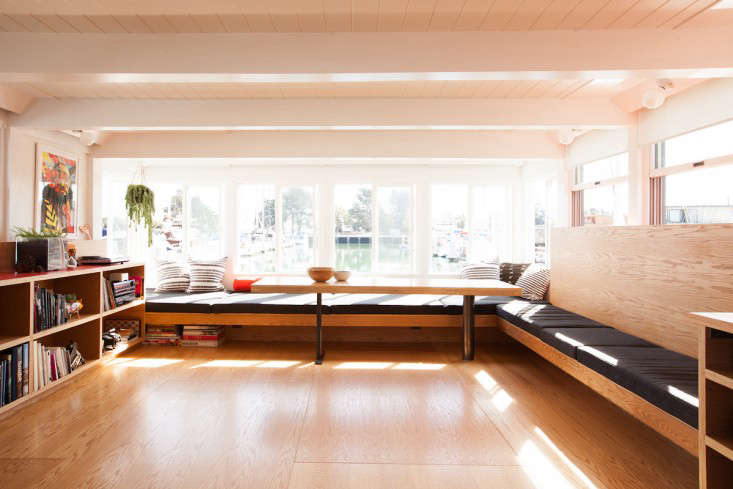 Above: Canepari wanted a comfortable lounge at the sunny south end of the boat, and to create it, an existing sun porch had to be removed. The combined living/dining room/kitchen has a built-in U-shaped bench-sofa and flooring of red oak plywood. The seating cushions are covered in dark denim. 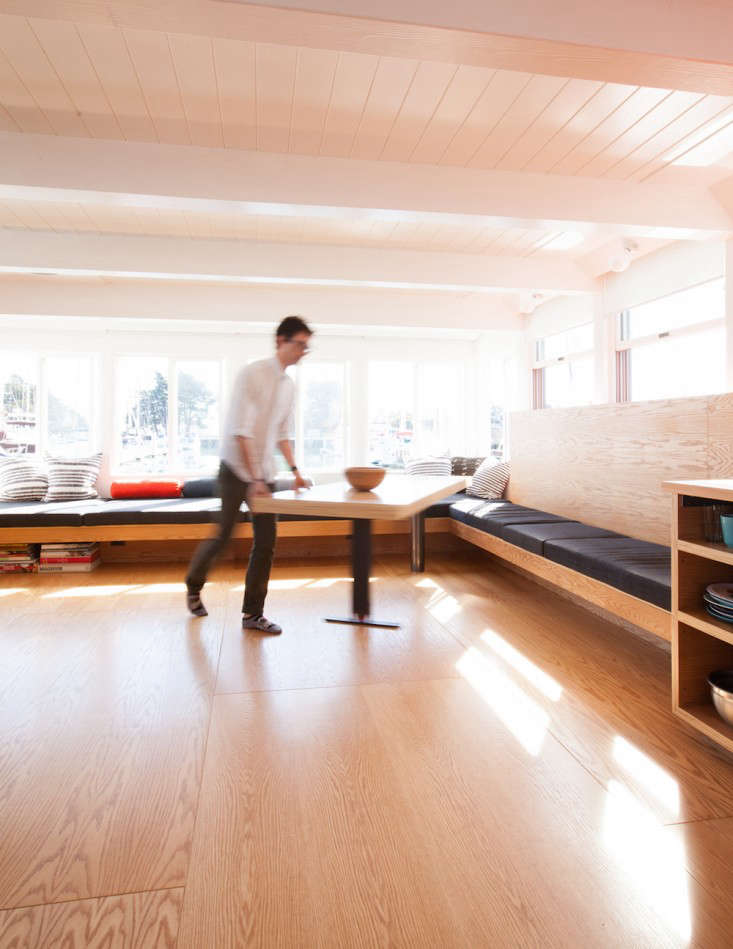 Above: So that the space easily functions as both dining and living area, the architects installed a pivoting table that turns on a 12-inch bronze pin set into a fixed steel cylinder bolted to the floor. The sliding end of the table has a steel foot that moves on a felt pad designed in partnership with Llyr Griffith of Welsh Ironworks. “We liked working with the tradition of built-in, bolted-down, and convertible boat furniture, as opposed to typical house furniture,” says Lanigan. 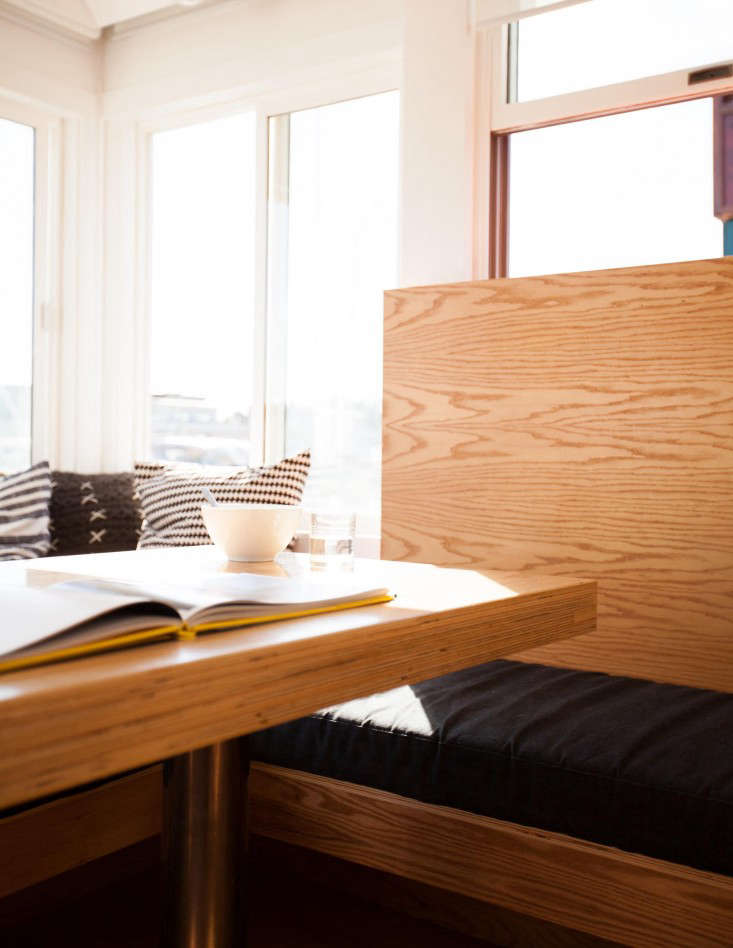 Above: The dining banquette is backed by a half-height plywood wall that rises to just below the windowsills and wraps around the room, creating a narrow ledge for displaying art and plants, and for hiding electrical outlets. 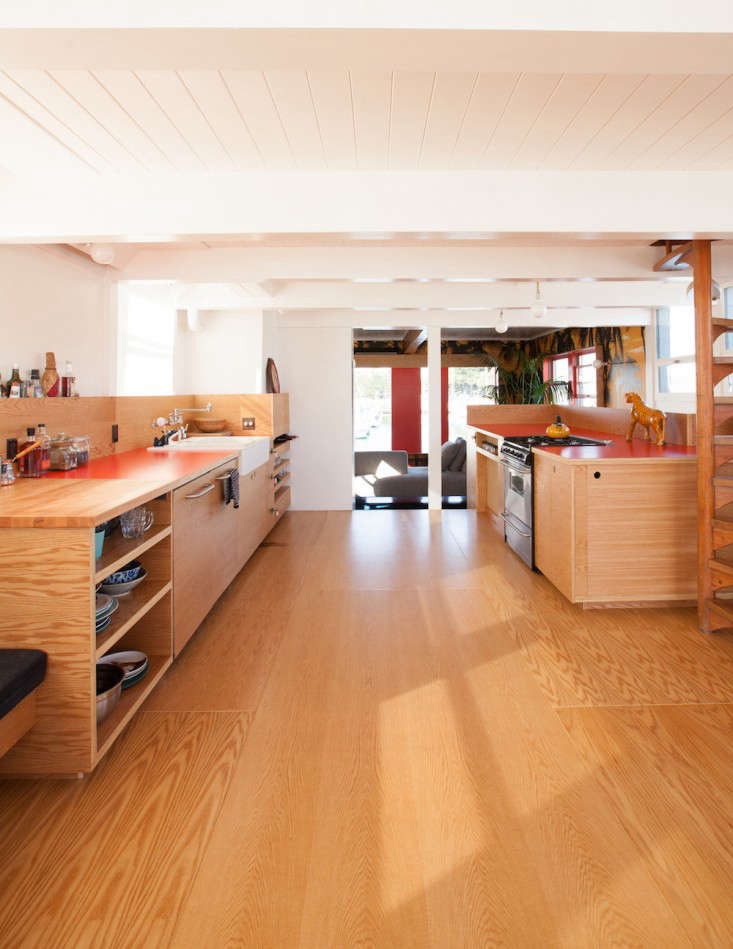 Above: To keep everything in the kitchen below the horizontal paneling line, Medium Plenty opted against full-size appliances and instead installed two under-counter refrigerators clad in plywood. (There’s also a full-sized fridge in the basement for backup.) Because they had to cover the stairway bulkhead below the kitchen, the counters ended up being deeper than necessary, and far deeper than one would typically find in a boat kitchen. The extra space serves as display storage for pantry items, plants, art, and wine.

Visible on the far right is a glimpse of the handmade spiral stair that leads to the master suite (to be renovated in Phase Two). The stair had been hidden inside a closet and was newly revealed in the renovation. 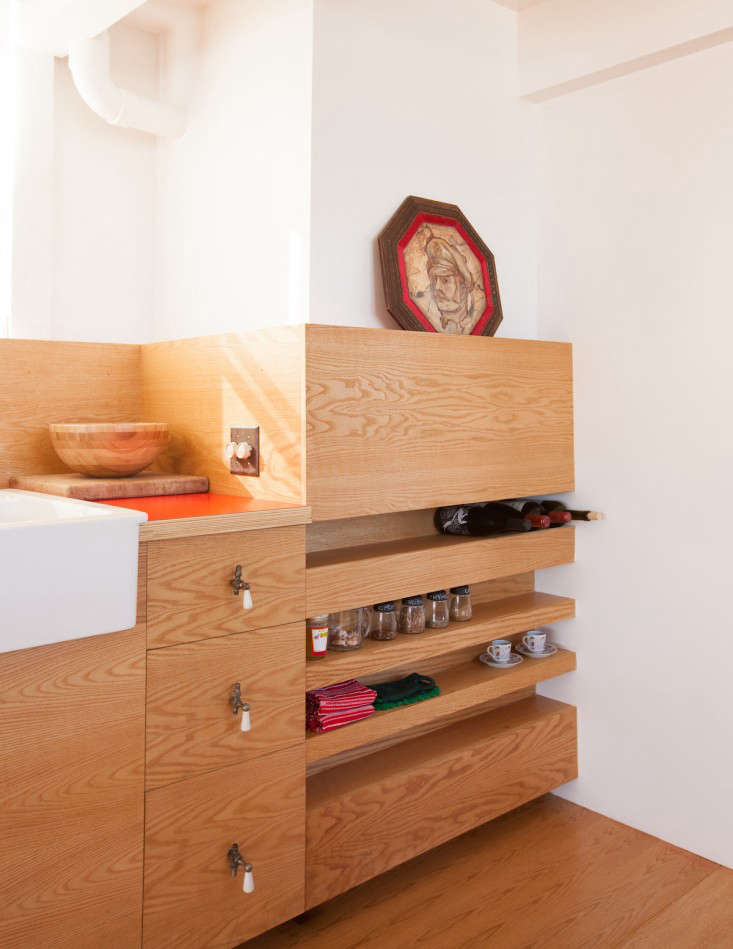 Above: The kitchen cabinets are red oak plywood with 1.5-inch exposed edges. The countertop is bright orange laminate–”supercheap, but dramatic.” The architects used vintage plumbing fixtures wherever possible, “which gave us a lot of personality and quality without the cost of premium brands.” They worked with their main salvage source, the Sink Factory in Berkeley, to test the vintage fixtures before installing them. The drawer pulls are vintage knobs from an old gas stove found by Canepari. “I like the way the abstract lines of the casework are set off by the vintage hardware,” says Lanigan. 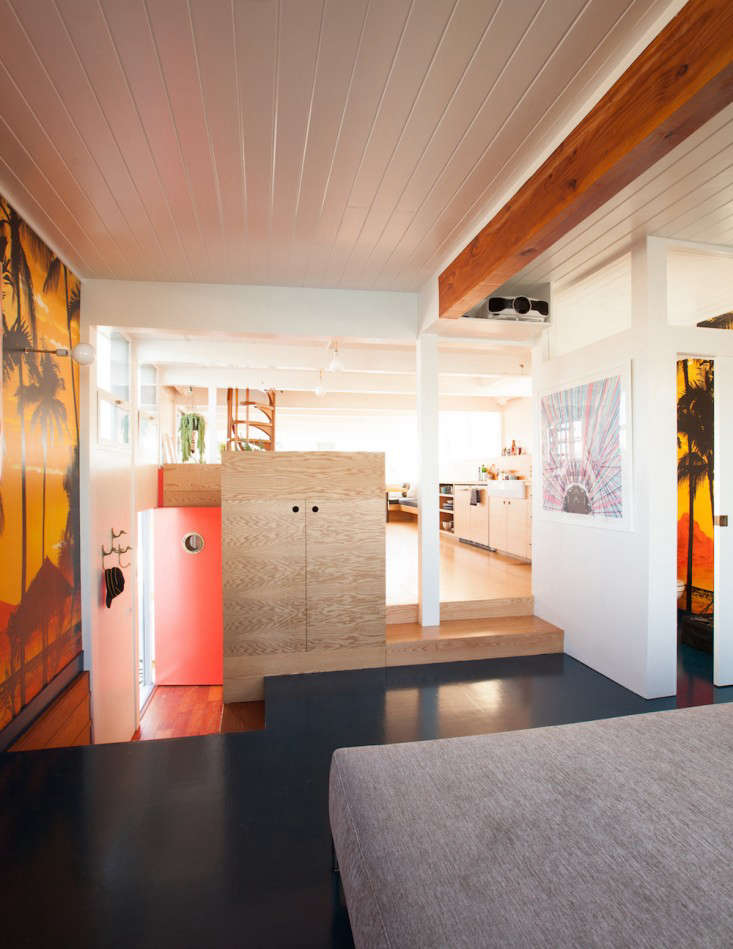 Above: The den is divided from the living/dining/kitchen area by plywood flooring painted a high-gloss midnight blue. From the start of the project, it was decided that the den would introduce a sea change of sorts from rest of the house. Wanting to combine humor and color with a maritime theme–”the 1970s-style romance of living on a houseboat”–the team wrapped the den in a “Margaritaville sunset,” the same wallpaper used in the office of Al Pacino’s character in Scarface. 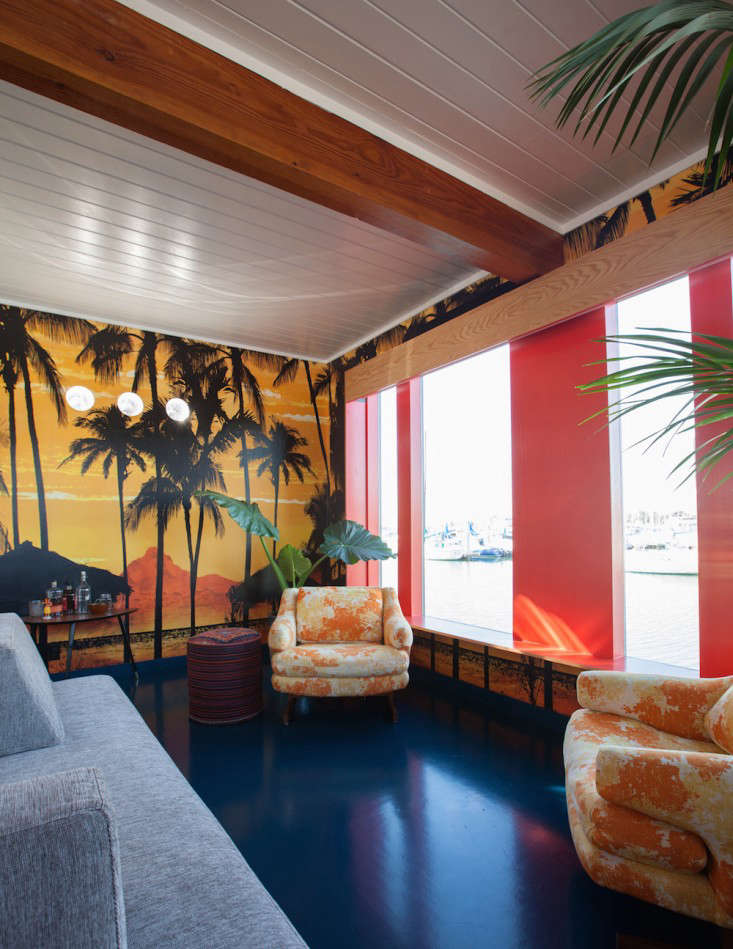 Above: On the mural wall, the architects installed three portholes of blown glass to obscure the view of the houseboat next door while still allowing light in. They initially were hoping to find vintage portholes, but came up with a more creative solution by working with glass blower Michael Meyer: The concave portholes stick out beyond the boat’s exterior walls and catch sunlight reflecting off the water, which projects a rippling pattern on the walls and ceiling. “It’s an amazing, if unintended, effect,” says Lanigan.

The wood valance above the windows hides a translucent sun blind plus a giant projection screen. Canepari, a big sports fan, uses a projector affixed to the opposite wall instead of a television. This way, he can be immersed in the game from anywhere on the main floor. 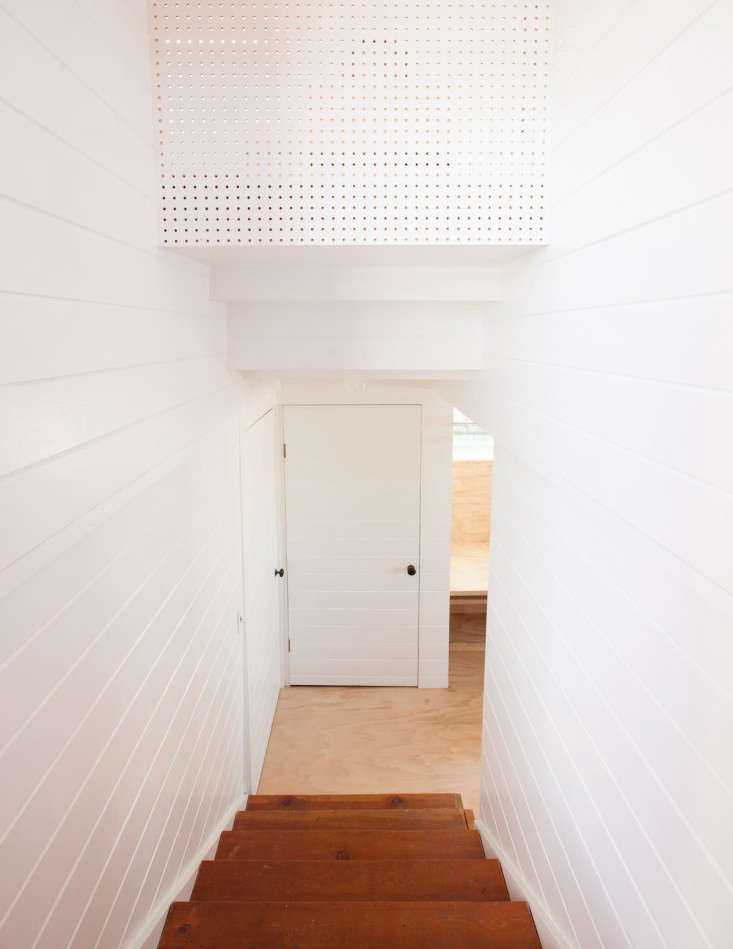 Above: On all the walls and ceilings, the architects used Benjamin Moore’s Chantilly Lace, one of their favorite whites. “It feels warm without looking off-white or ivory,” says Lanigan. 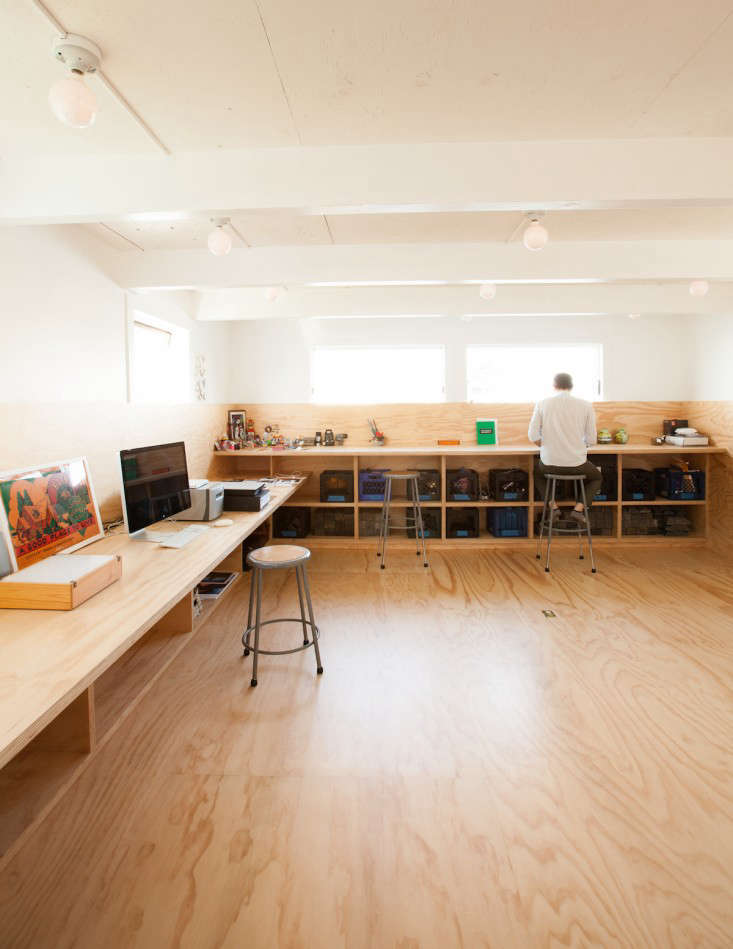 Above: The basement office is Canepari’s workspace, which he often shares with collaborators and assistants. Built-in long counters at both sitting and standing heights are below eye-level operable windows that open just a few inches above the surface of the water. Here, the architects used a similar plywood wrapping as they did upstairs, this time using ACX fir plywood. Typically applied as exterior wall sheathing and hidden under siding, notes Lanigan, it’s a beautiful material that can withstand more abuse than typical decorative plywood. It also has no formaldehyde and minimal off-gassing. (Learn more about the material in Remodeling 101: The Ins and Outs of Plywood.)

The office ceiling is the first floor’s subfloor, ridded of excess wiring and painted white. Five-inch dimmable white globe lights are mounted in a grid with exposed J-boxes and conduit.

Above: The houseboat at twilight. The top floor master suite is set to be renovated next: The greenhouse outside the master bedroom will become a wooden deck with a built-in fire pit and a ladder will lead to a shored-up crow’s nest. Photograph by Zack Canepari.

The pros and cons of working on a houseboat? The biggest perk, says Lanigan, is that the standard building code doesn’t apply to boat interiors, “so anything goes.” (Exterior changes, however, require approval of the harbormaster). “The biggest drawback is that you can’t just build level and plumb, because you can’t trust that the boat is level in the water.” Lanigan also notes that the contractor needed to acquire special insurance to work on a houseboat: “I don’t think most contractors would have agreed to do that, and apparently specialist marine contractors are exorbitant.”

Overall, Lanigan says, “I think Zack will be very happy as long as he keeps the sewer pump running well and the basement windows closed during storms.”

We’re in a nautical mood. Take a look at: