On Monday, we visited Patrick Williams of design-build firm Berdoulat at home in London–see Out with the New: Reinventing the Past in a London Remodel. Today we’re exploring his family’s home away from London: one of Bath, England’s most beloved historic houses, which Williams spent 18 months overhauling.

The Georgian townhouse at 5 Pierrepoint Place was built in 1748 as the home of John Wood, the Elder, the designer and town planner behind many of Bath’s greatest architectural hits, including the Royal Crescent and the Roman Colosseum-inspired Circus. Purchased in a near derelict state, it’s been brought back to life by Williams, a restoration expert, ardent salvage hound–and, now, B&B host: He and and his wife, Neri Kamcili, have dubbed the house Berdoulat & Breakfast and run it as a two-room inn. 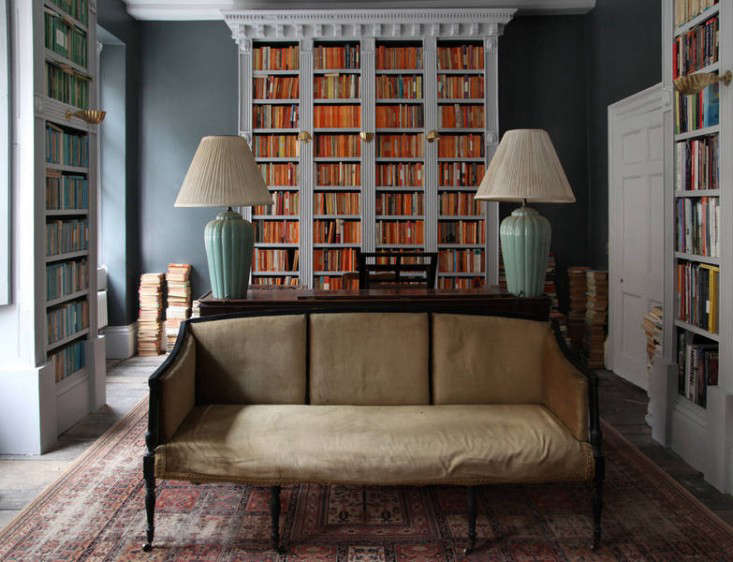 Above: Williams’s collection of Penguin paperbacks fills his London living room and the library in Bath. Guests are invited to peruse the stacks on request, but asked to “sit with care on the sofa,” an original Hepplewhite. 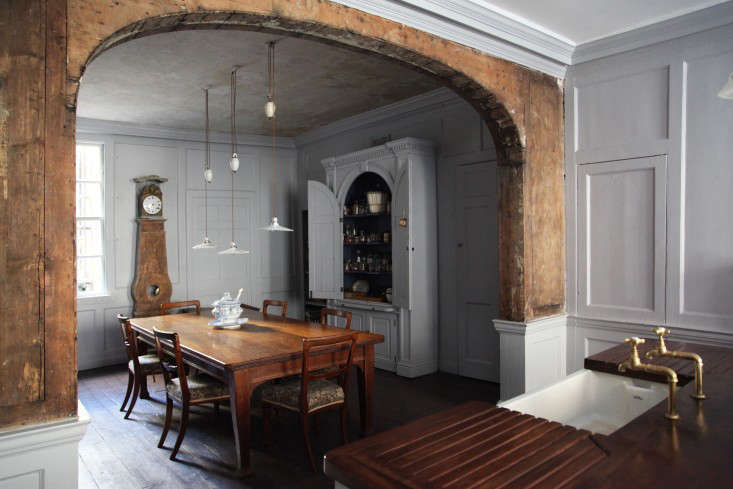 Above: Williams created the combined kitchen and dining room out of spaces previously used as a dentist’s office, Masonic meeting room, and the green room of a neighboring theater among other things. The dining table once stood in the boardroom of his great grandfather’s pottery and was the family table at Berdoulat, his childhood home in Southwest France. 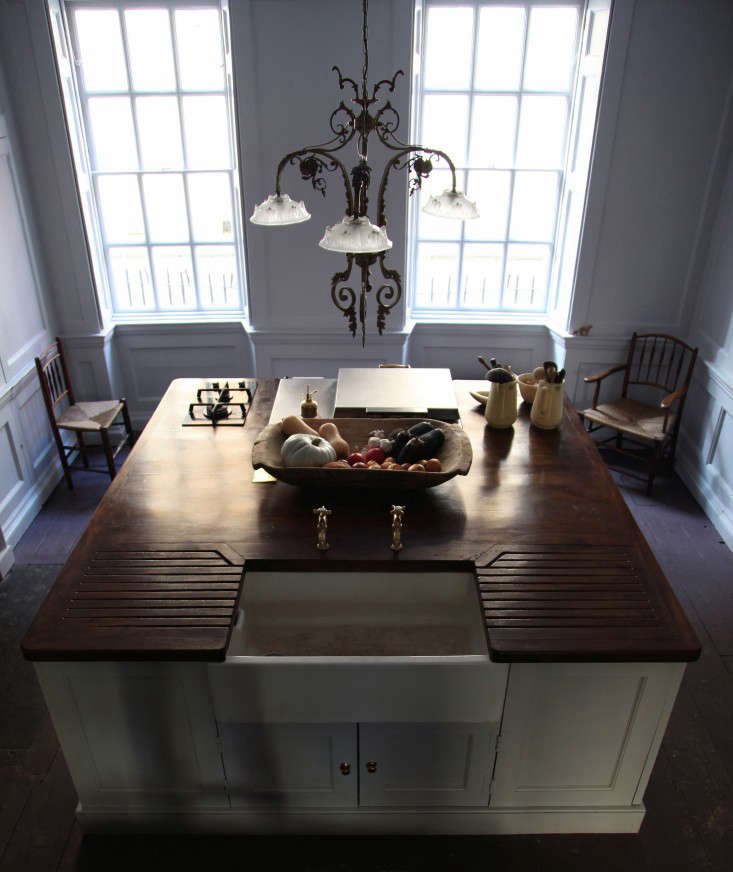 Above: “Keen to keep the original paneling of the walls on show, we decided to design the kitchen around a central island, and to match the molding of the panels in the unit’s doors,” says Williams. “We have our cabinetmaker friend Marcus to thank for the building of the island. He suggested it be referred to as the kitchen continent rather than island given its scale.” 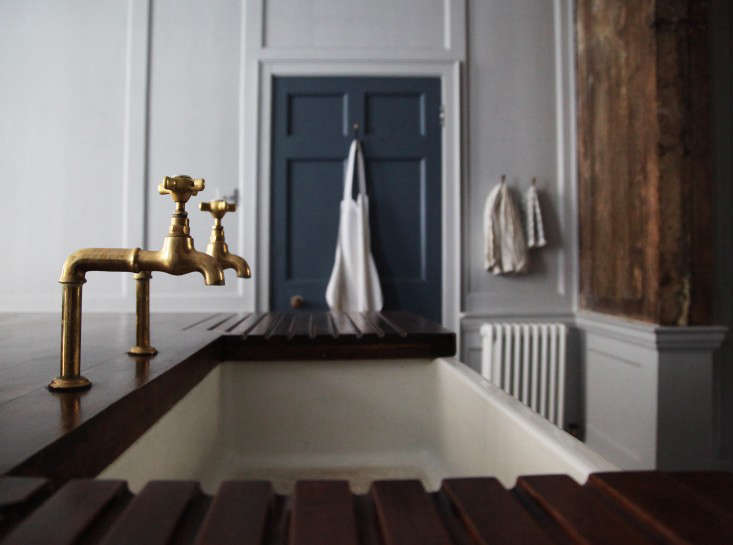 Above: The vintage taps came from “a wonderful man in Bidford on Avon who restores brassware.”

Neri Kamcili grew up in Istanbul and offers guests a choice of Turkish or English breakfast. 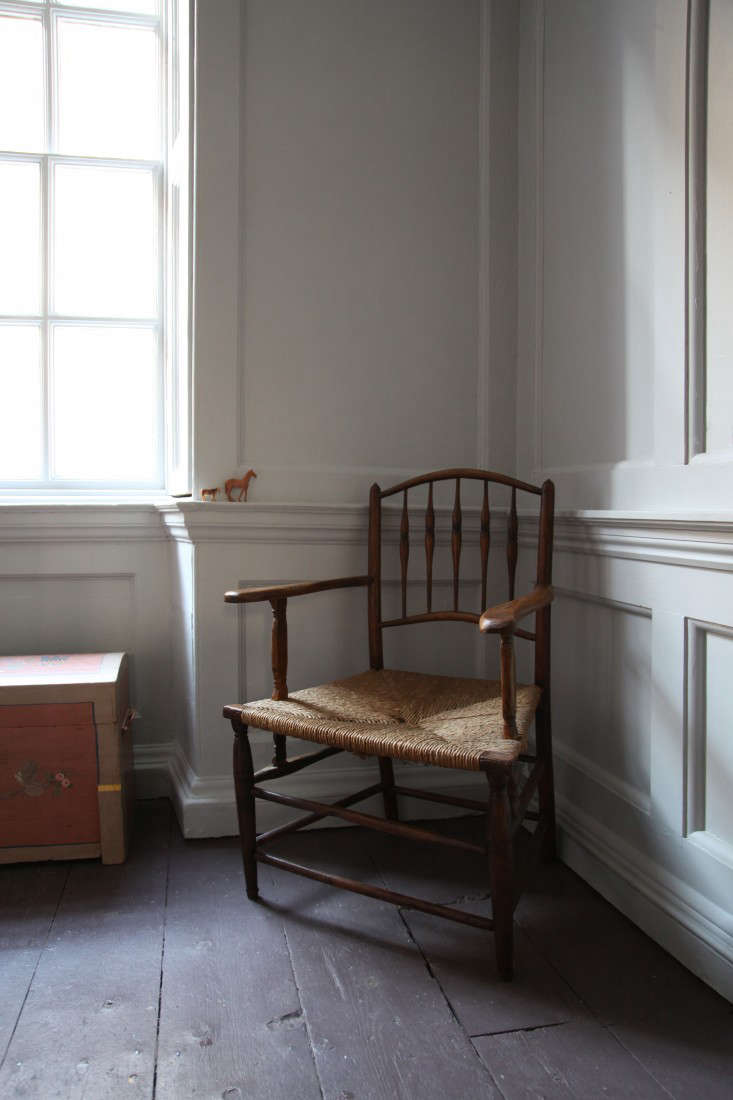 Above: In a corner of the kitchen, an antique rush-seated chair and evidence that Williams and Kamcili’s two young children are in residence. 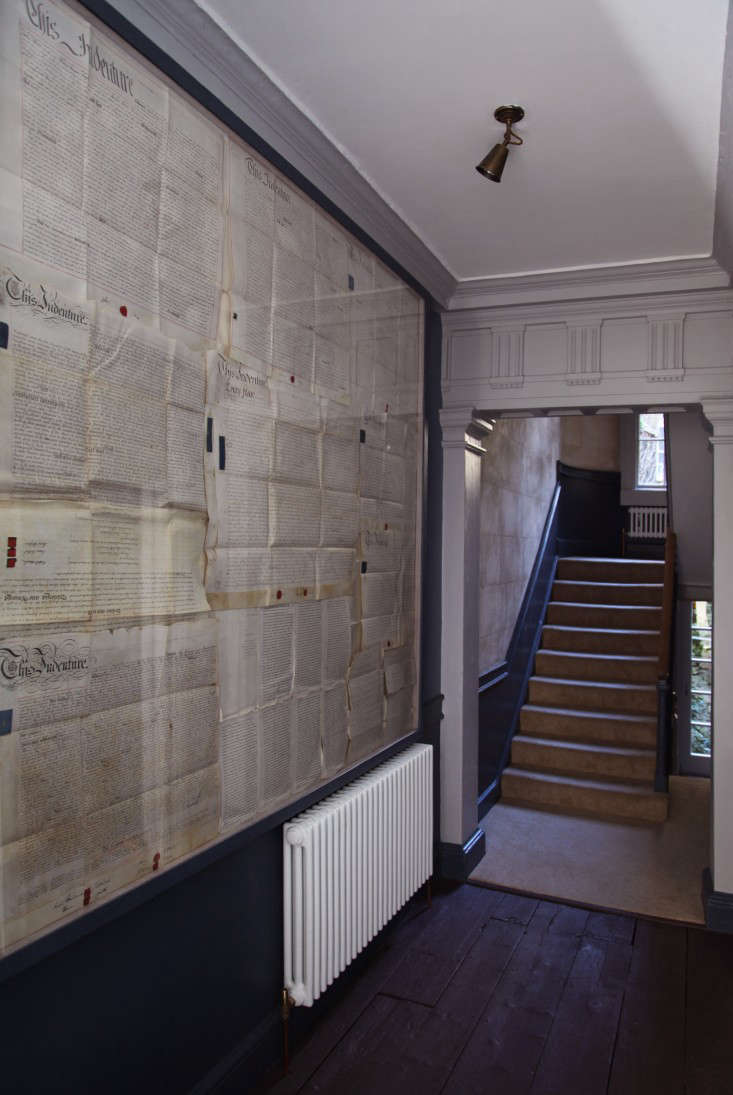 Above: “A paper trail history of the house from before it was built” patterns the entryway. The documents detail how the house was to be built–”from citing the source of the stone through to the color the windows and front door were to be painted,” says Williams. “Our paint color dilemma was solved when we discovered these deeds.” 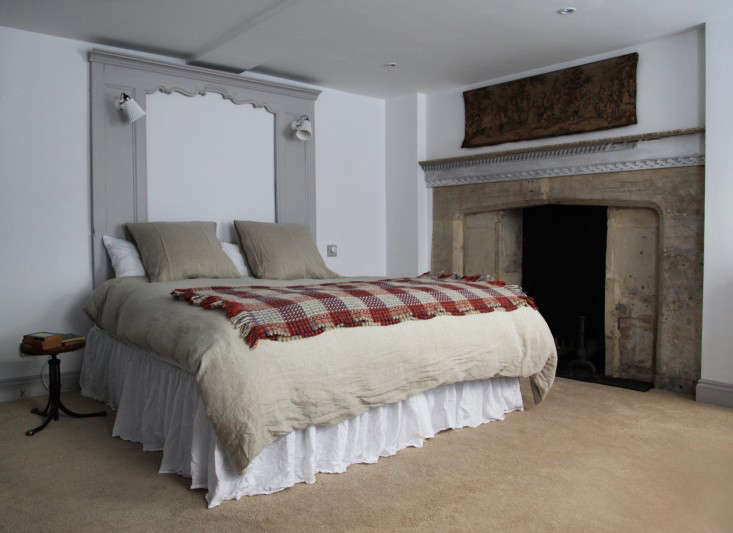 Above: The Elder Suite occupies what was originally the kitchen, and has a stone fireplace that once contained the hearth and bread ovens. Note the headboard created from a salvaged fireplace surround. 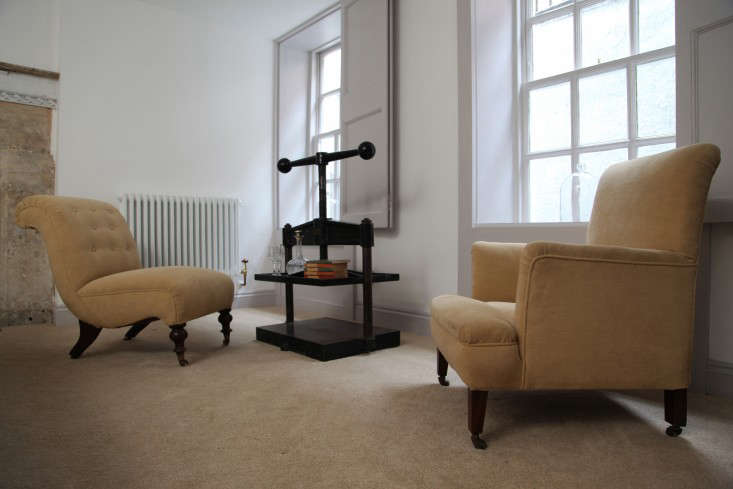 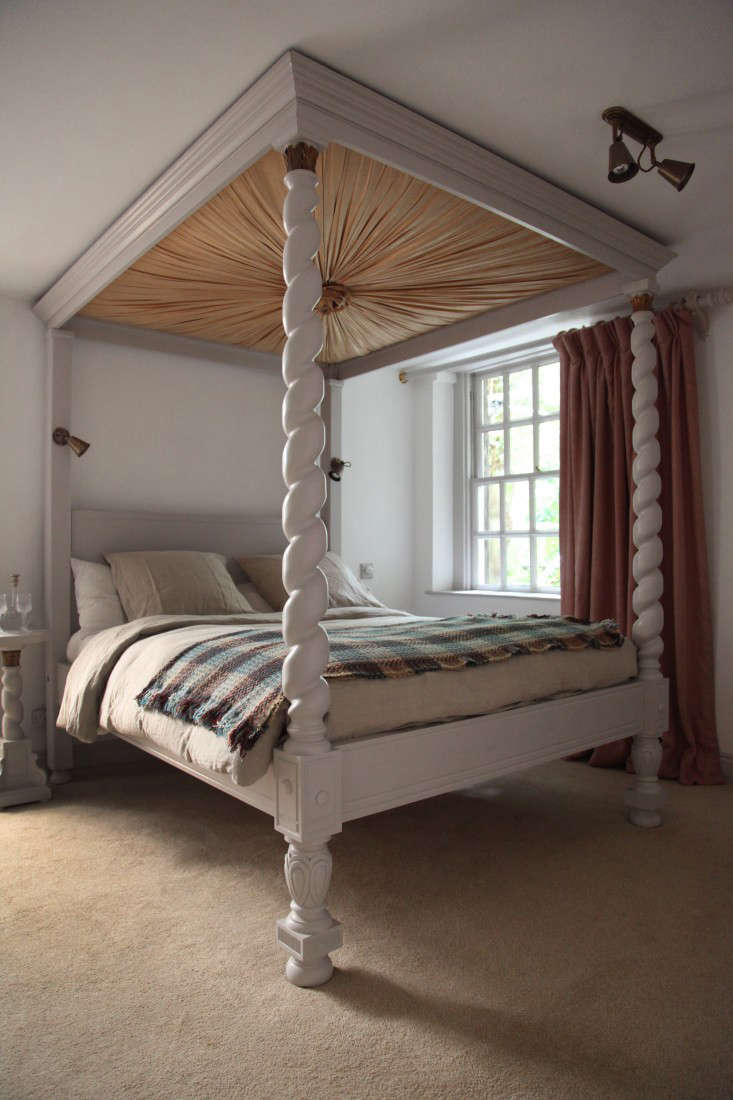 Above: A floor-to-ceiling antique four poster in the Linley Suite. 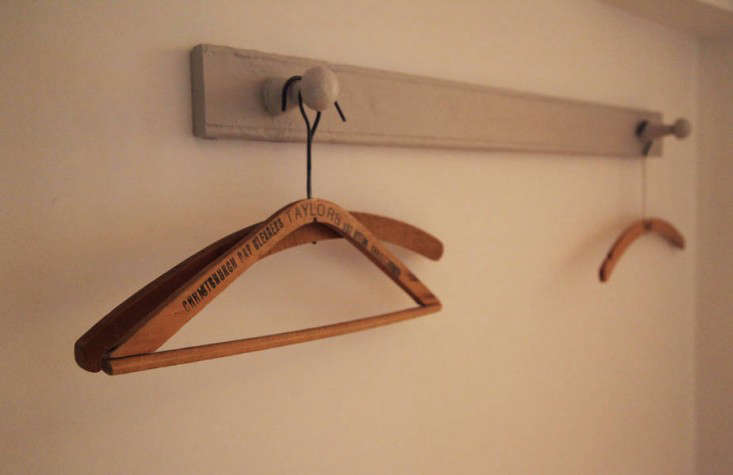 Above: The peg rail, a Remodelista favorite. Go to 11 Favorites to find display-worthy clothes hangers. 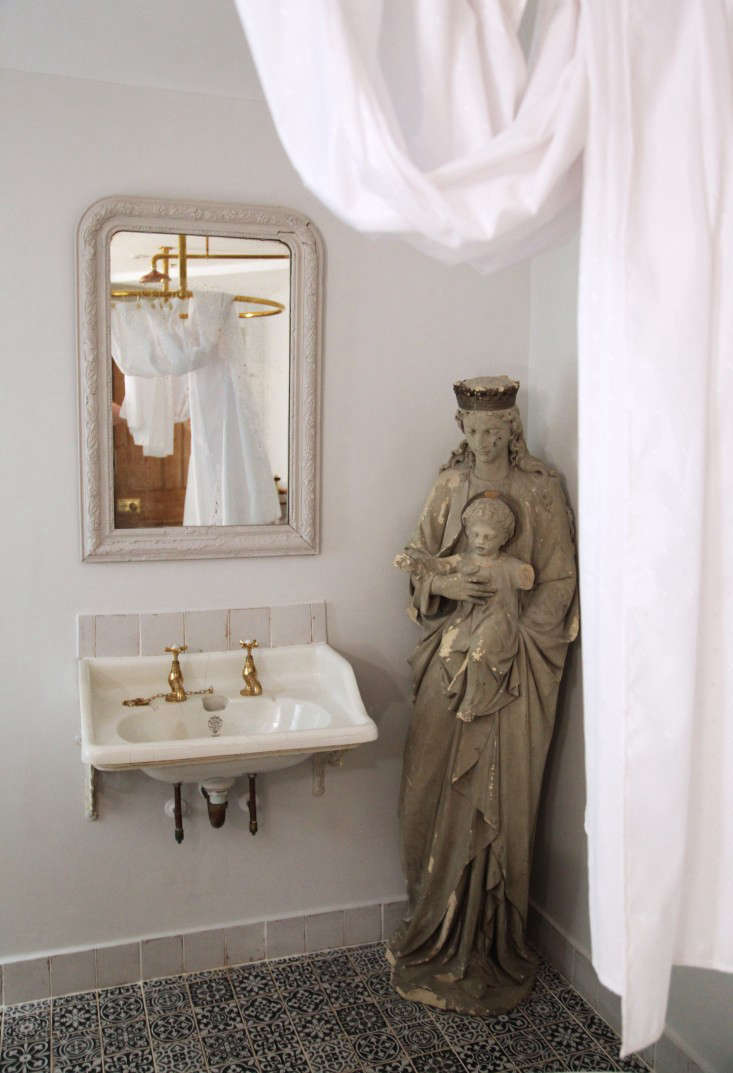 Above: An antique stone statue of the Virgin and Child migrated from the couple’s London master bedroom to the Linley bath. 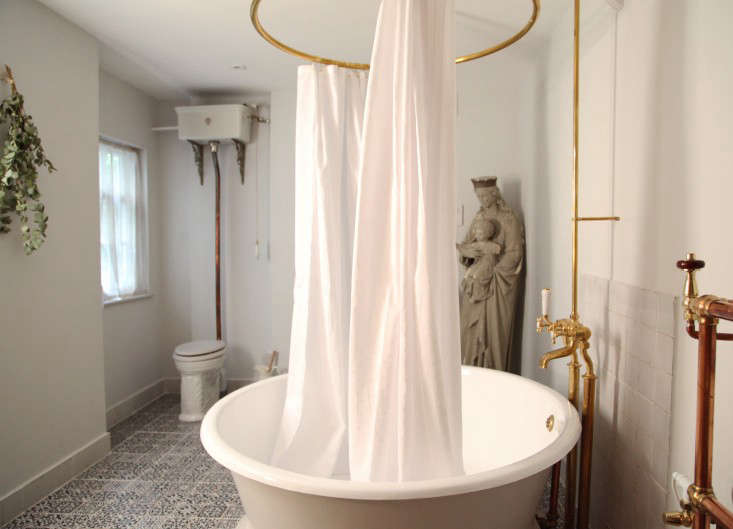 Above: The Linley Suite bathroom comes with a circular tub and brass fixtures, towel warmer included. Curious about the benefits of the hanging branches? See Design Sleuth: Instant Spa Bathroom. 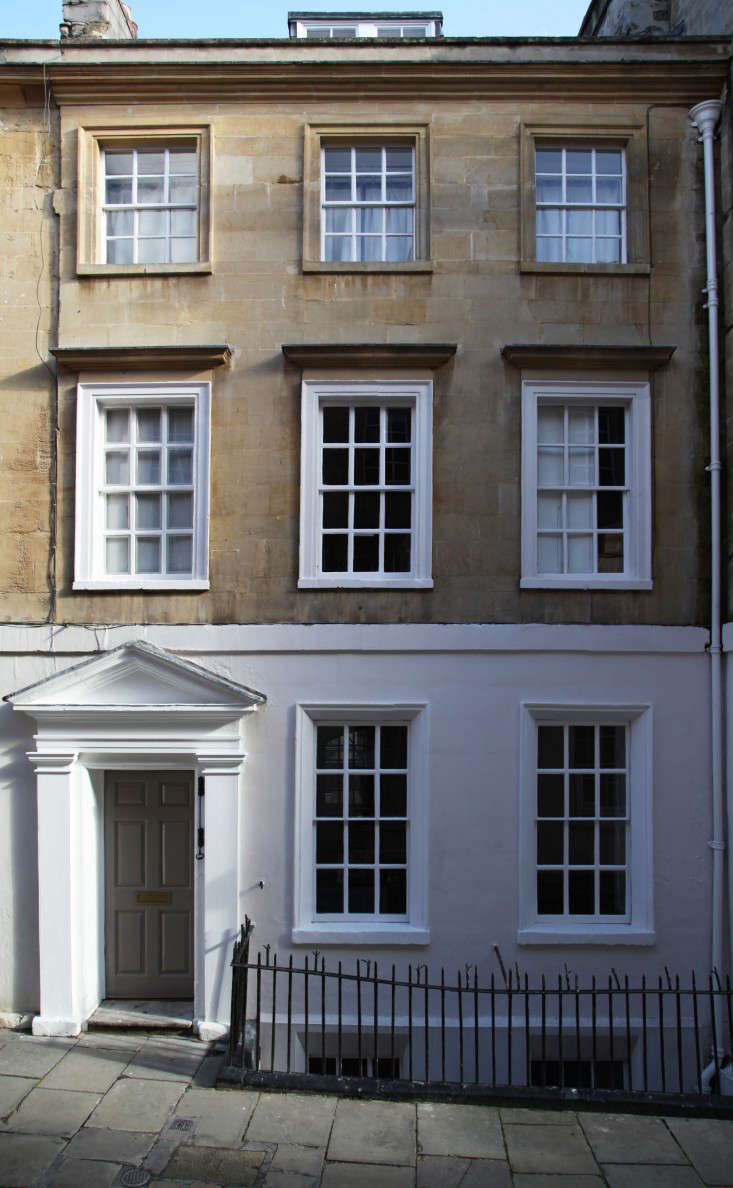 Above: The Georgian house, like so many that John Wood designed, has a faí§ade of local gold-colored limestone now known as Bath stone. Go to Berdoulat & Breakfast for more details and reservations.

Classic Trolleys from Kaymet in England