For a New York couple–Phil, a screenwriter, and Jill, a writer/TV personality–who made the leap from Brooklyn to LA, Karen and Guy Vidal of Design Vidal carved out a master bath by stealing space from a former laundry room. They tricked out the room with hints of home–subway tile and steel casement-style shower included. 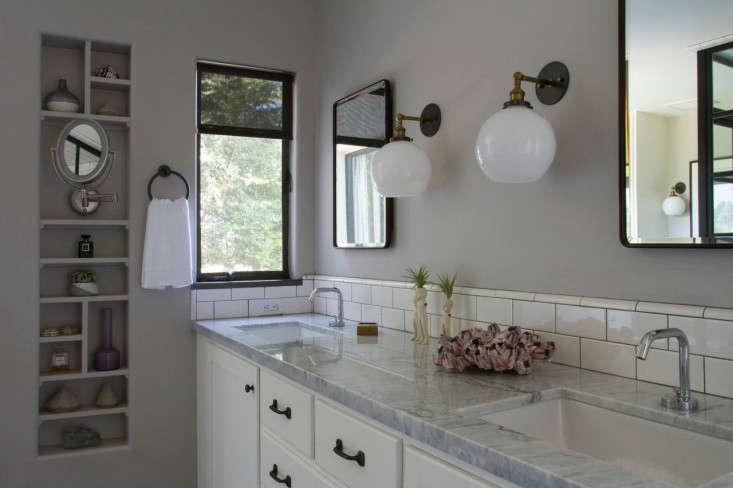 Above: The new bathroom is situated on the downstairs level of the couple’s 1939 house in Silver Lake Hills: “They bought the place and immediately regretted it,” says Karen. “It was poorly laid out and they thought they were going to have to put on an addition.” Karen and Guy were able to rethink the setup: “We took over a laundry room, a small existing bathroom, and some unfinished space under the house, which gained us the footprint for the bath.”

The bathroom has custom cabinetry, a Carrara marble counter from Giallo Stone, and Daltile Subway Tile. The faucets are Zen1 from Watermark, which, notes Karen, “designs and manufactures plumbing and light fixtures in Brooklyn.” The globe lights are 20th C. Factory Filament Milk Glass Cafe Sconces from Restoration Hardware. 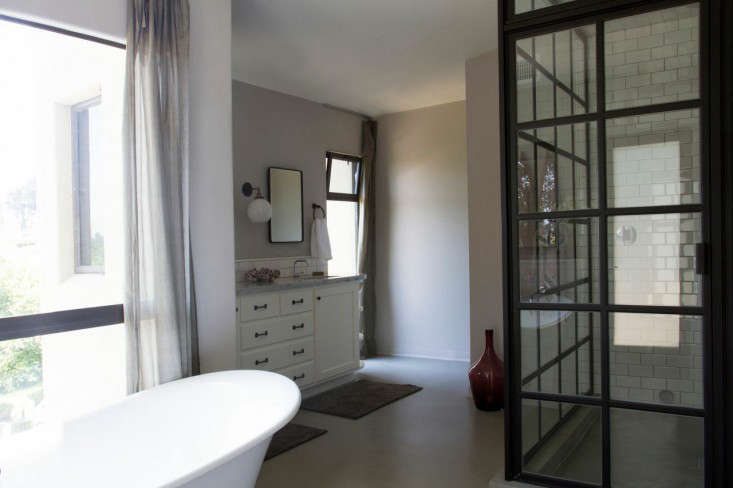 Above: “Phil and Jill both like a modern industrial look, and that was the direction for the master bath design,” says Karen. “Since the house is from the thirties, we pulled in certain vintage elements to create a space that feels fresh but also part of the whole. They both really miss Brooklyn, so the white subway tile and steel casement-style shower enclosure are nods to that.”

The shower doors were custom made to the Vidals’ design by American Shower Door and take their cues from the house’s existing steel windows. The bathroom’s new windows are by All Weather. Alongside the bath–the Toulouse design from Victoria + Albert–a gray voile curtain from Les Indiennes hangs on a ceiling track from DK Drapery Hardwares. 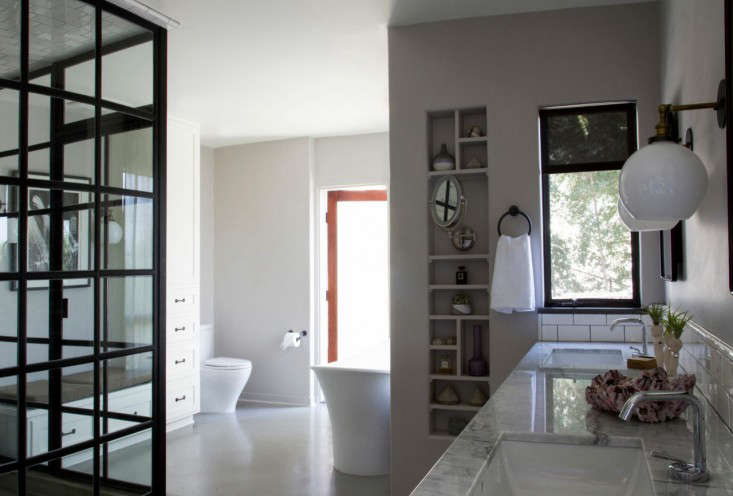 Above: The floor is an epoxy resin that has the look of concrete–”again pulling in a grittier vibe to the space,” says Karen, who explains: “Tile on the floor would have been too busy. Actual concrete would have required at least a four-inch thick pour and would have been way to heavy. The epoxy floor was a great solution, though it wasn’t the easiest process: It requires several coats and takes time to build up to the finish. Unlike concrete, it’s water resistant, but it isn’t waterproof, meaning the shower still needed waterproofing under the epoxy, but the rest of the floor was installed over plywood–and it’s worked out well.” 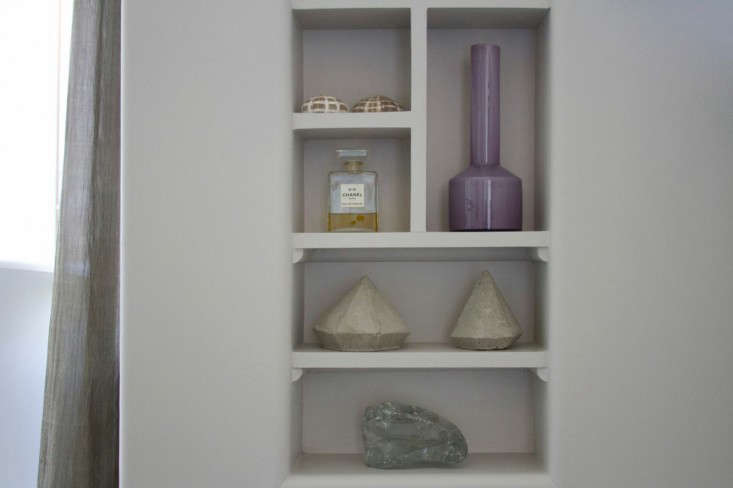 Above: Inset shelves provide streamlined display next to the sink. 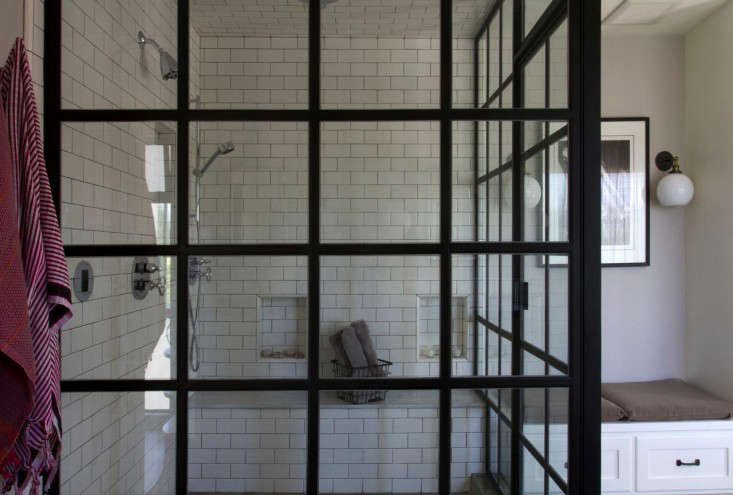 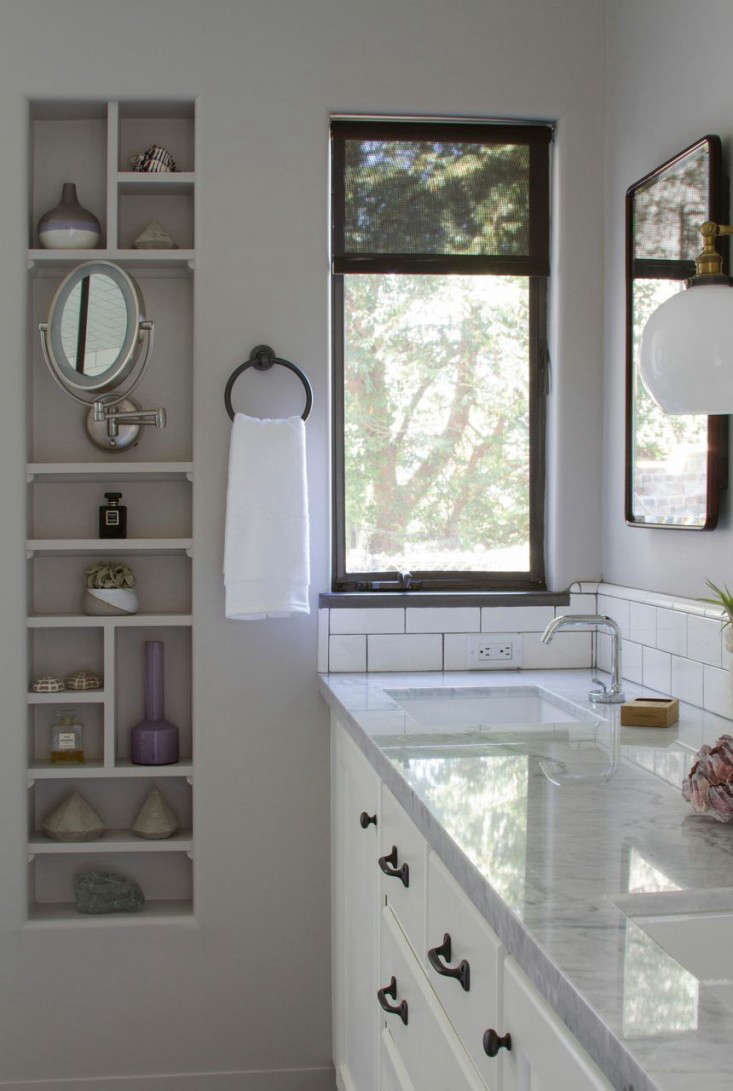 Above: The cabinet hardware is Restoration Hardware’s Aubrey Pull and Aubrey Knob in an oil-rubbed bronze finish. The mirrors are stealth cabinets–they’re Vintage Recessed Medicine Cabinets from Pottery Barn. 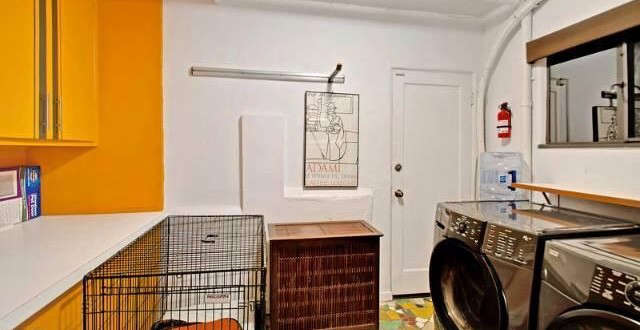 Above: A glimpse of the laundry room that became the master bath. The door shown here was replaced with a glass design that’s situated next to the tub. Go to Design Vidal to see more of Karen and Guy’s work.

For more ideas, browse the hundreds of Bathrooms in the Remodelista gallery, including:

Editors' Picks: 14 Favorite Storage Solutions in Our Own Homes