Somehow in the last year or so, all of the world’s most stylish people seemed to have touched down upon Jaipur, India, and decided to stay a while–and get some work done, too. Such is the case for Dutch designer Marie-Anne Oudejans, creator of the runaway-hit fashion label Tocca. Of late Oudejans has been living at Jaipur’s historic (and happening) Narain Niwas Palace Hotel, where she’s been transforming the bar into one of the world’s most fanciful cocktail lounges. It just opened–and goes to show that magical dressmaker details translate well on a grand scale. 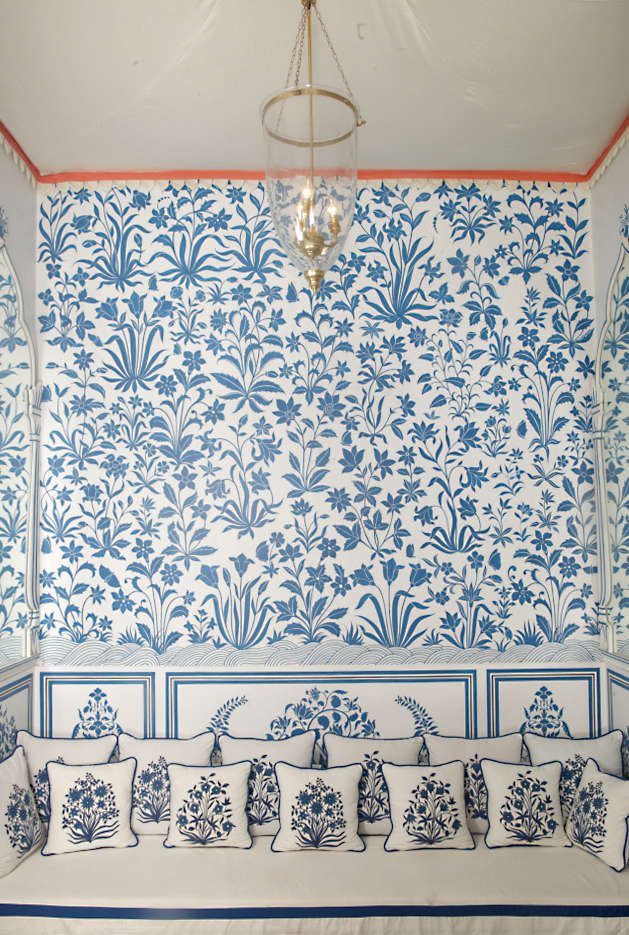 Above: Your Campari and soda and Rajput club sandwich await in a field of blue and white flowers–with orange scalloped edging. 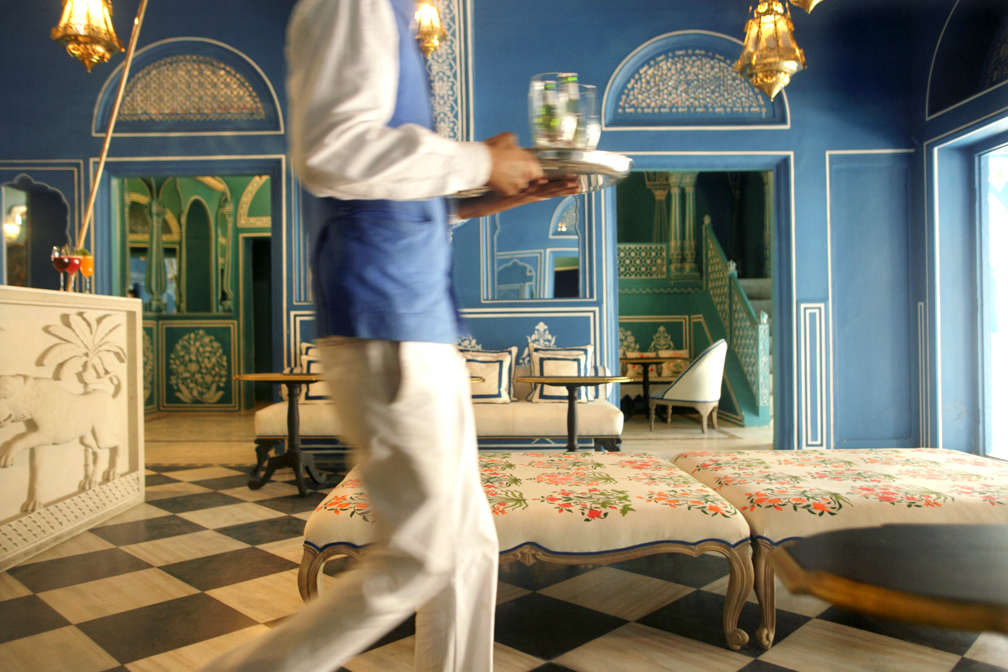 Above: Bar Palladio is owned by Barbara Miolini, a Swiss-Italian ex-pat who wanted to introduce an Italian-style lounge in her adopted home. She hired her friend Marie-Anne Oudejans to fully create the wonderland setting. From conception to opening, the project took eight months. “By drawing on royal Mughal style and the feeling of the opulence of the maharajahs from the 20th century, Marie-Anne created a space that pays homage to its Indian surroundings yet feel completely European at the same time,” says Amber-Grey Chiara Knowles, a kids’ fashion designer in Jaipur and Oudejans’ assistant on the project. 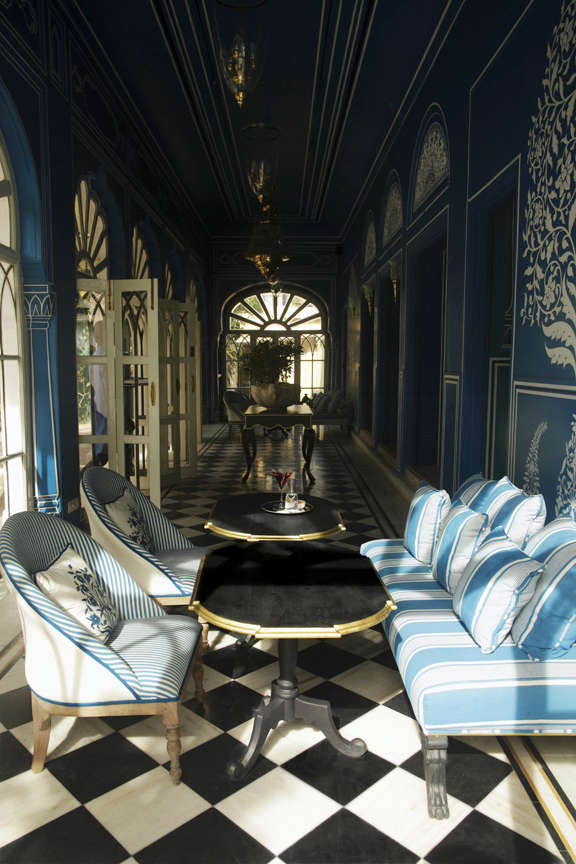 Above: “By drawing on royal Mughal style and the feeling of the opulence of the maharajahs from the 20th century, Marie-Anne created a space that pays homage to its Indian surroundings yet feels completely European at the same time,” says Amber-Grey Chiara Knowles, a children’s fashion designer and Oudejans’ assistant on the project. 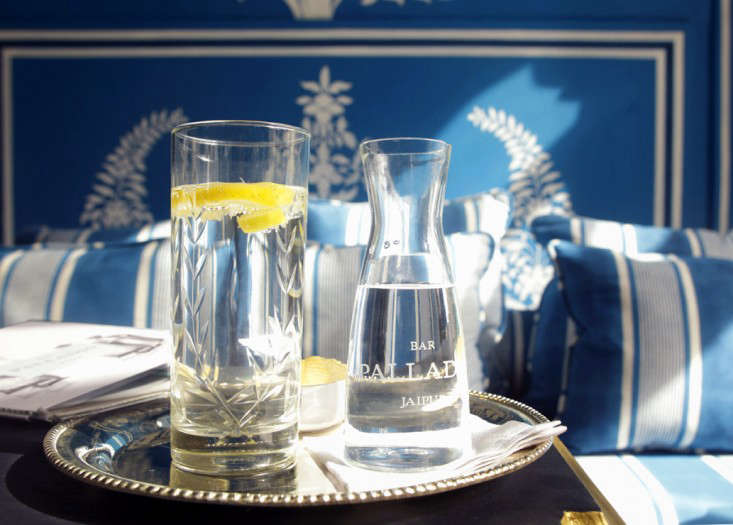 Above: The glasses are old-fashioned crystal. (Your grandmother’s crystal is having a moment; take a look at our Trend Alert.) 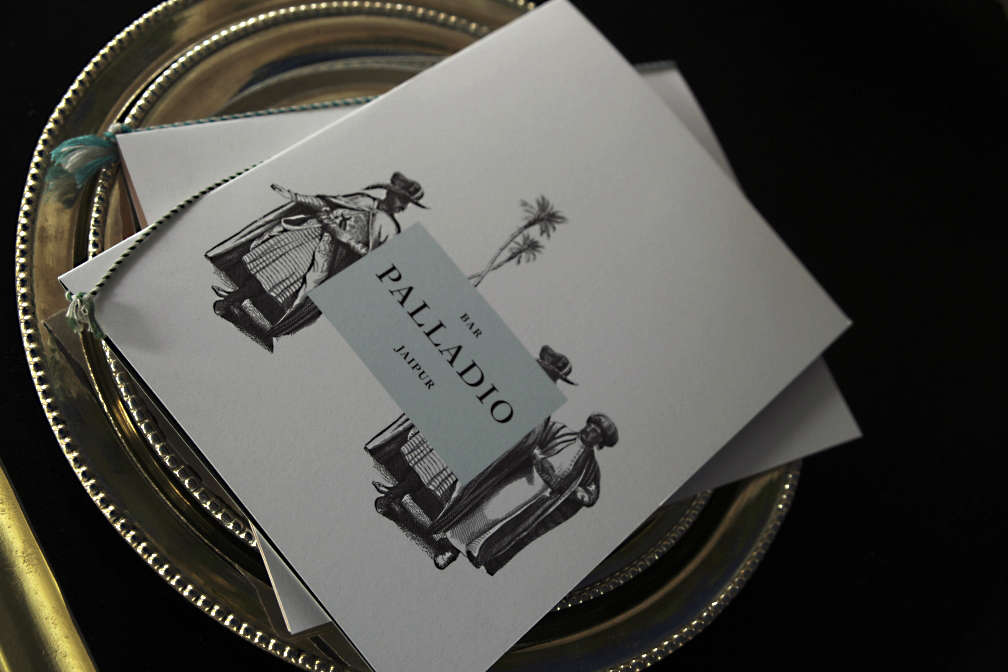 Above: The Veneto, where owner Miolini once lived, is part of the spirit of the place. Oudejan’s created the bar’s graphics in collaboration with Marie Lusa of Studio Marie Lusa in Zurich. 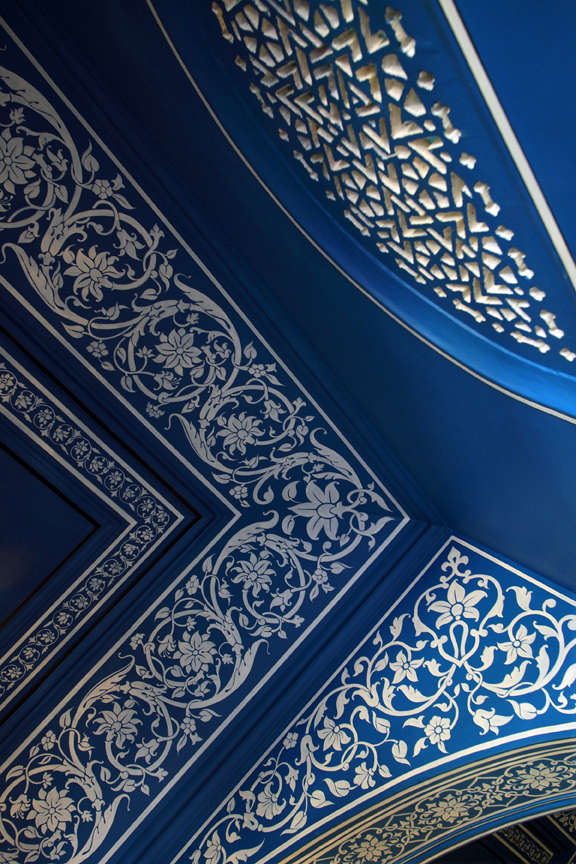 Above: Painted detailing and pierced walls in royal blue. 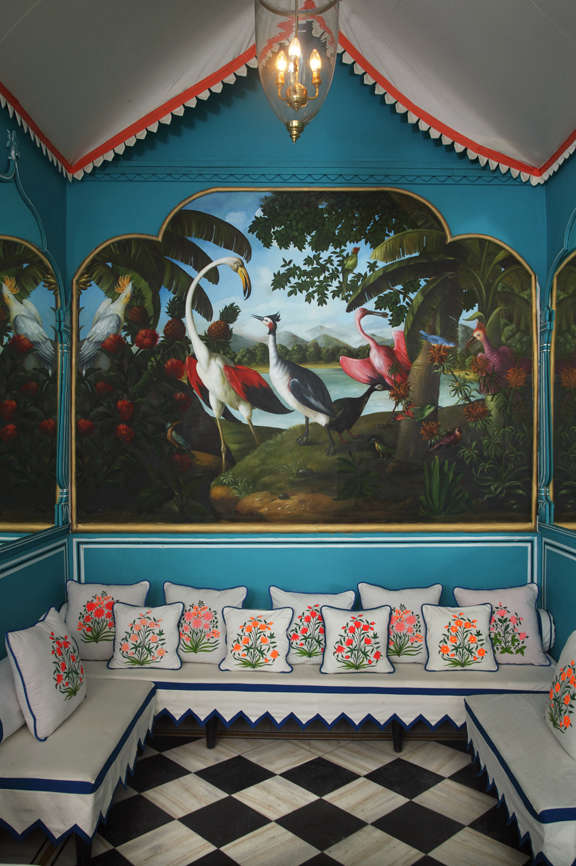 Above: Every detail, down to the pillow piping, was designed by Oudejans and fabricated by Jaipur artisans. Vikas Soni of Jeypur Arts painted the interior, including these murals of exotic birds under a tented ceiling. 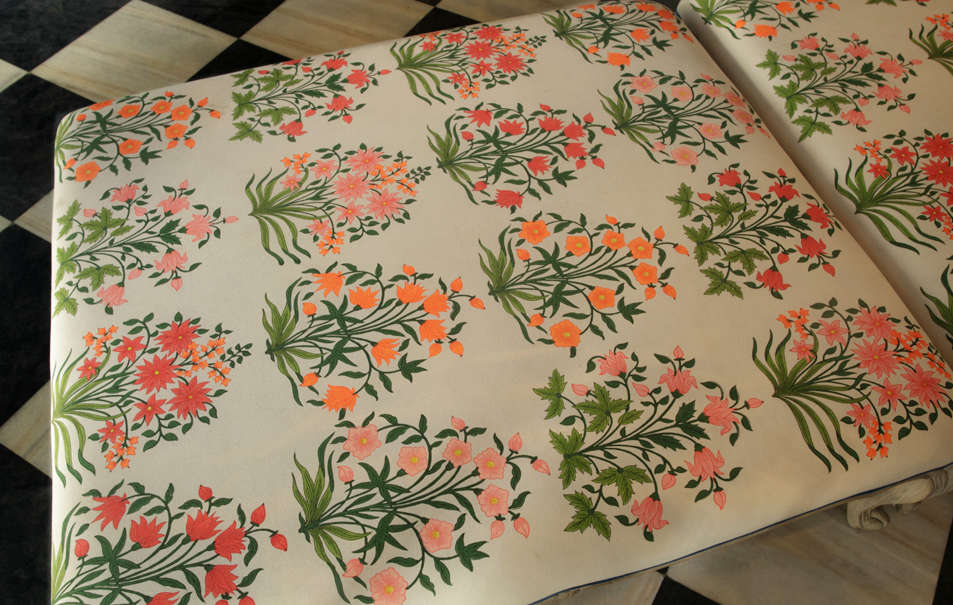 Above: A field of flowers on a banquette; Lily Pulitzer would approve. 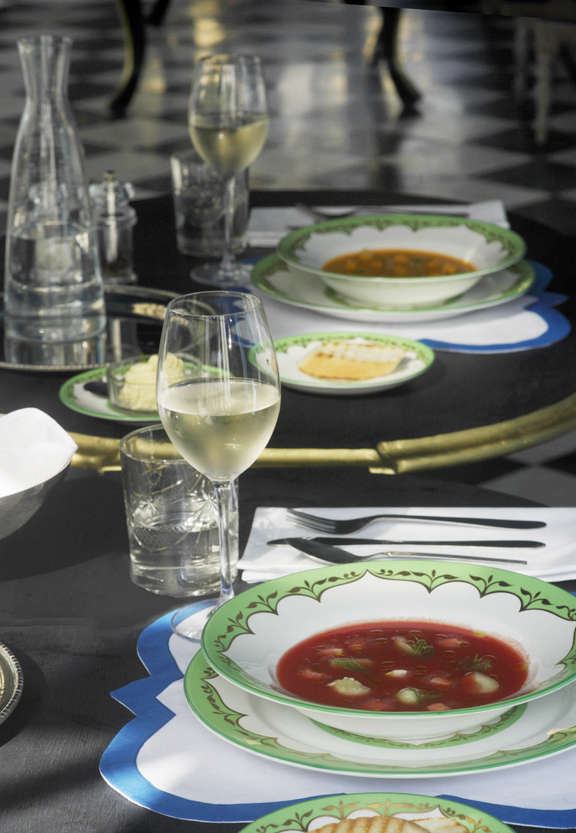 Above: The menu presents Italian fare served on formal china–and on the placemats that echo the architectural details. 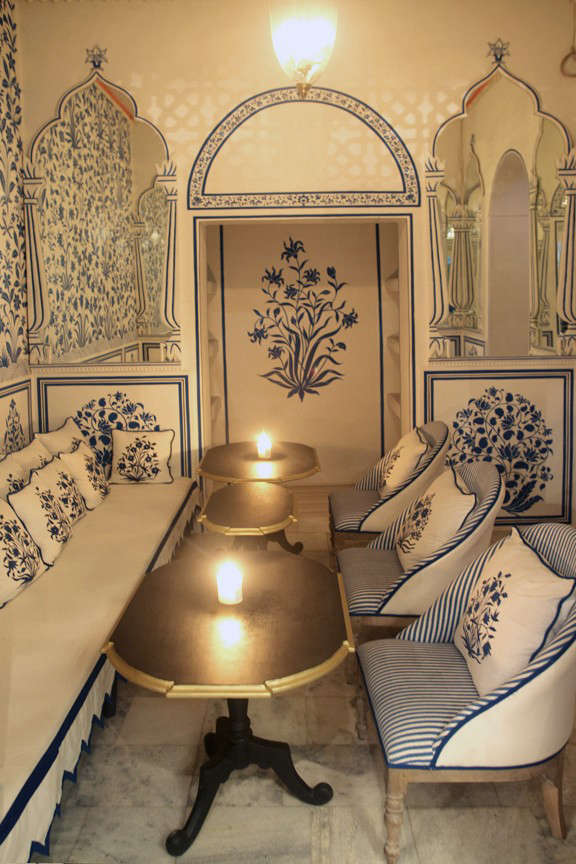 Above: The multi-room bar has many quiet hideaways, including the White Room. Oudejans borrowed her blue and white motifs from classic Indian designs that she translated in an outsized way. 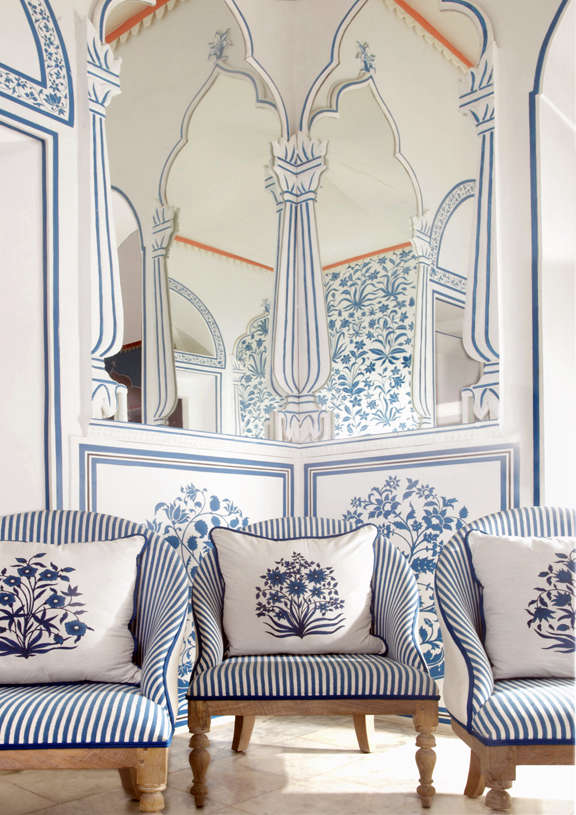 Above: A corner of the bar is presented as a fanciful stage set. 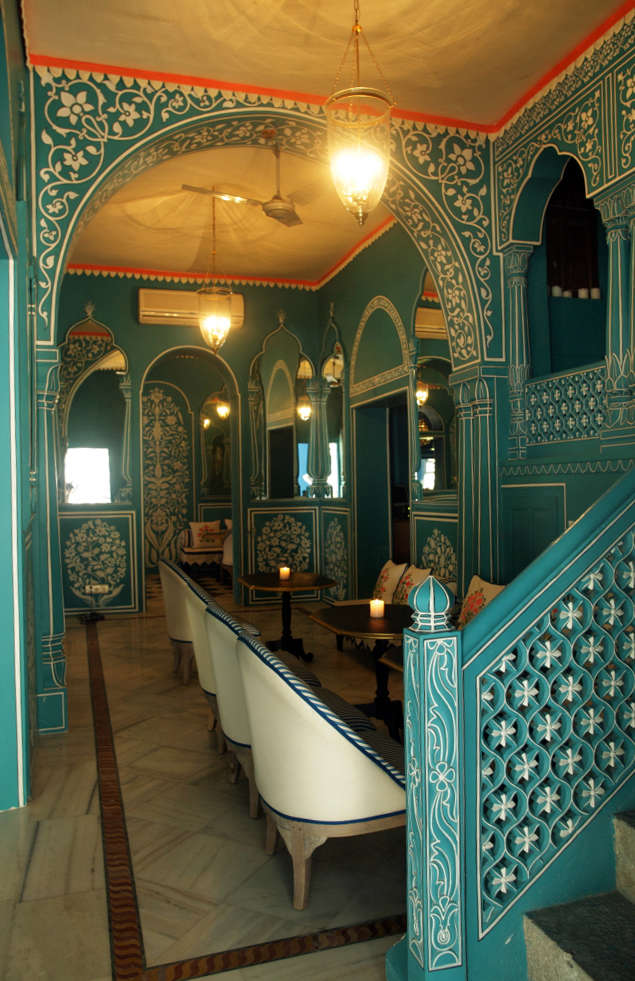 Above: The mood shifts to teal in a room off the main bar with classical Indian archways and embellishments. Note the orange ceiling edging, a finishing touch throughout that pulls together the whole design. 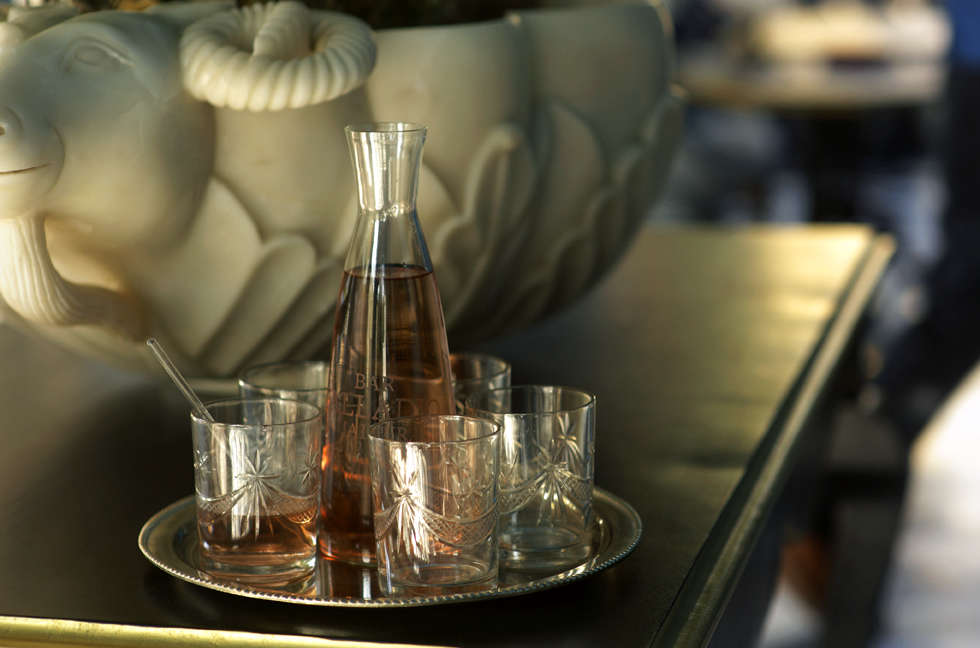 Above: Drinks for five alongside a ram-shaped bowl 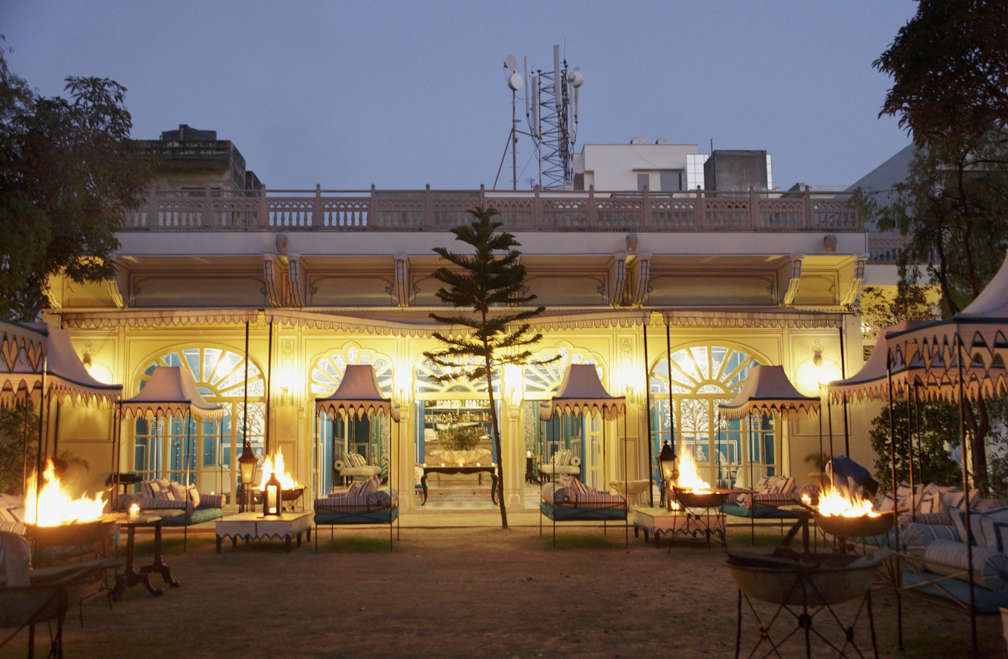 Above: Bar Palladio continues in the garden, newly splashed out with tented banquettes and flaming fire pits. Oudejans plans to continue living in Jaipur, where in addition to working as a fashion consultant, she’s now running Trust and Treasure Heritage, her new design company. Bar Palladio is the outfit’s first project. See Bar Palladio and the Narain Niwas Palace Hotel for more details and reservations.

For more design inspiration from near and far, peruse Hotels & Lodgings in our photo gallery. And at India Song, you can catch up on all of this week’s discoveries (including Abode, the Ace Hotel of Mumbai). Ready to do some planting? Here are Gardenista’s 10 Garden Ideas to Steal from India.

Ask the Expert: An Insider's Guide to Delhi from Monica Patel-Cohn