London antiques dealer Will Fisher is obsessed with beautiful objects from the past; when you’re with him, you feel you are in the presence of an antiques whisperer. Fisher doesn’t just talk about antiques; he actually speaks to them, coaxing them to come alive and willing them to become relevant.

As you’d expect, his own London home is filled with centuries-old relics and furnishings (many of which he’s been collecting since childhood). His shop, Jamb Limited, is London’s go-to source for antique fireplaces and reproduction chimney pieces. Texture and patina speak to him as do line and volume; ever so sparingly in wonderfully hushed tones, complete with a dash of humor along the way.

N.B.: Fisher recently sold the majority of his collection at a Christie’s Auction, enabling him to begin collecting all over again. For information on his new collections, see Jamb Limited and Hawker Antiques. 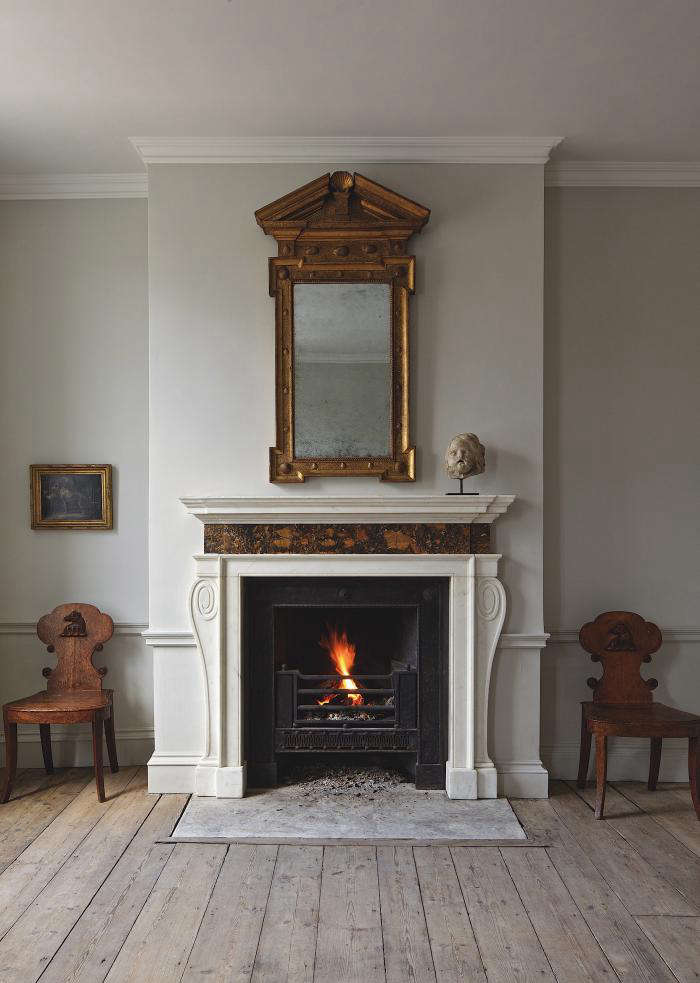 Above: Like the aesthetic he creates in Jamb’s designs, Fisher always aims to capture the essence of the classical English country house. A pair of oak hall chairs stand on the side of an antique chimney piece that inspired Jamb’s Oxford stone chimney piece. Above the chimney piece is a George II giltwood mirror. Photograph by Simon Upton. 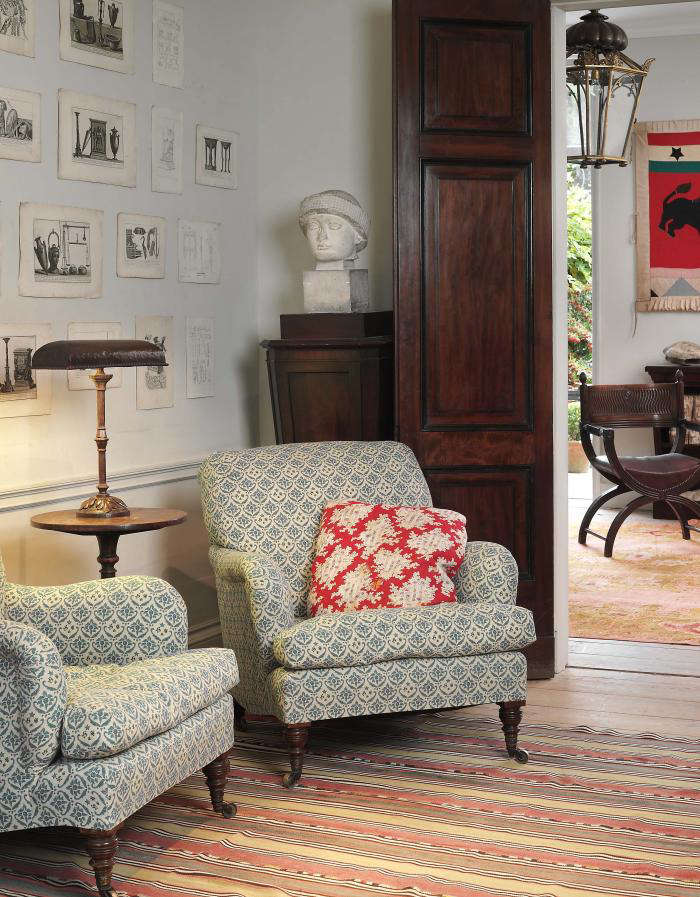 Above: The prints on the wall are unframed and lend a contemporary feeling to the room. 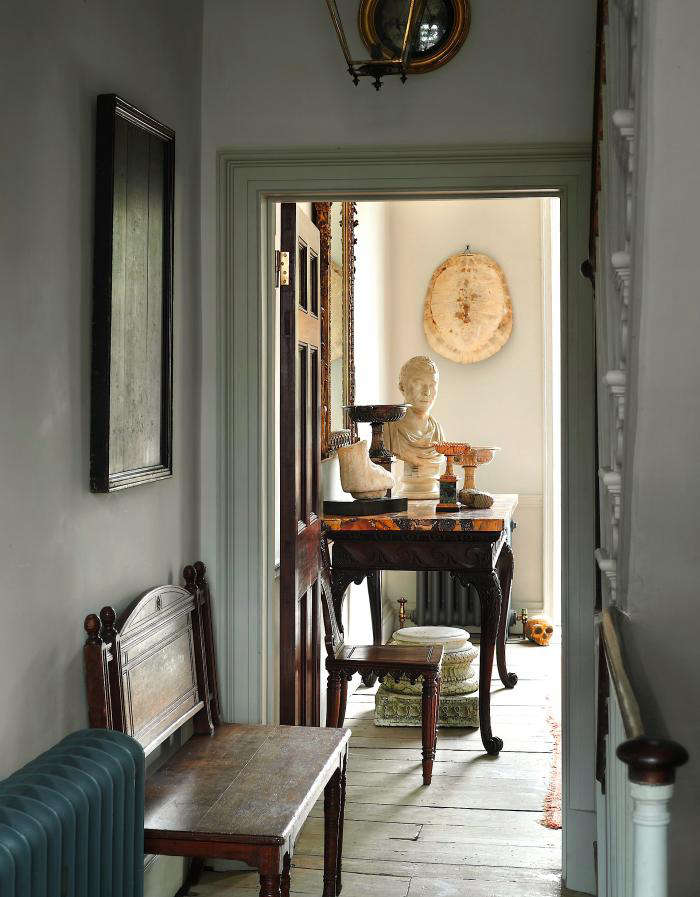 Above: A glimpse from the hall into the living room show a casual display of classical statuary on the table and floor. 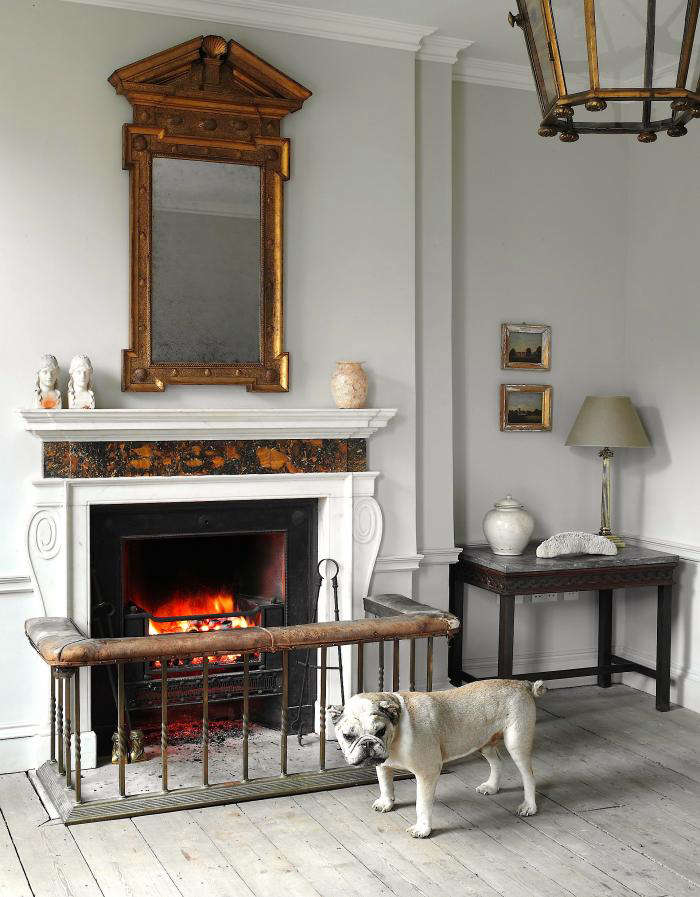 Above: Being stuffed does not seem to diminish the ferocity of the French fighting dog. 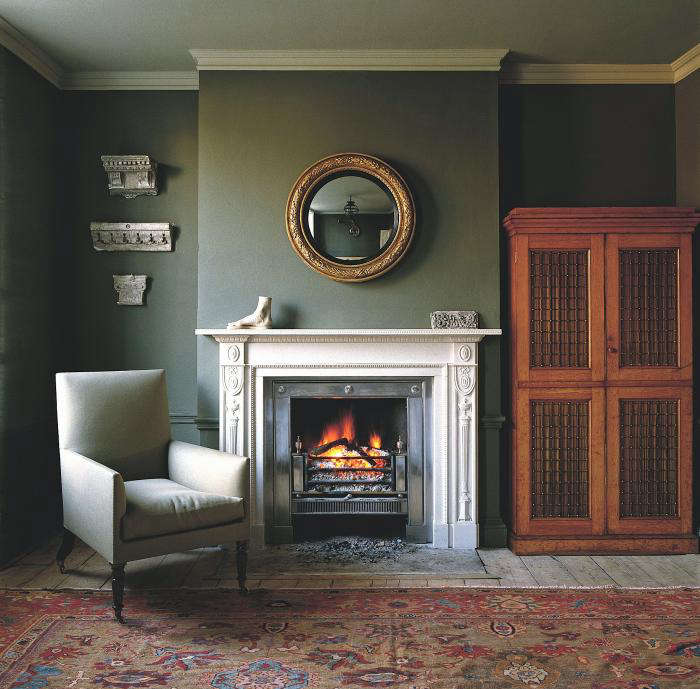 Above: Fisher’s furniture is spare with simple lines. Designed in the tradition of Gillows of Lancaster, the Lancaster Chair’s turned and tapered, reeded legs are elegant and graceful. Photograph by Simon Upton. 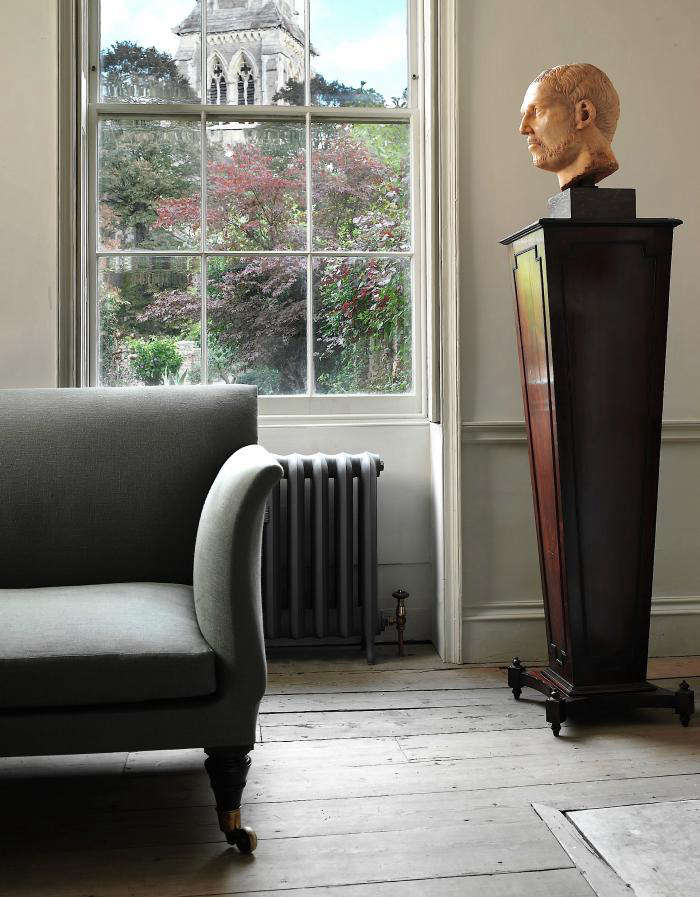 Above: Although the house is in the middle of London, the garden gives the feeling of being in the middle of the countryside. For a tour of Fisher’s garden see An Antiques Collector’s Garden in London. 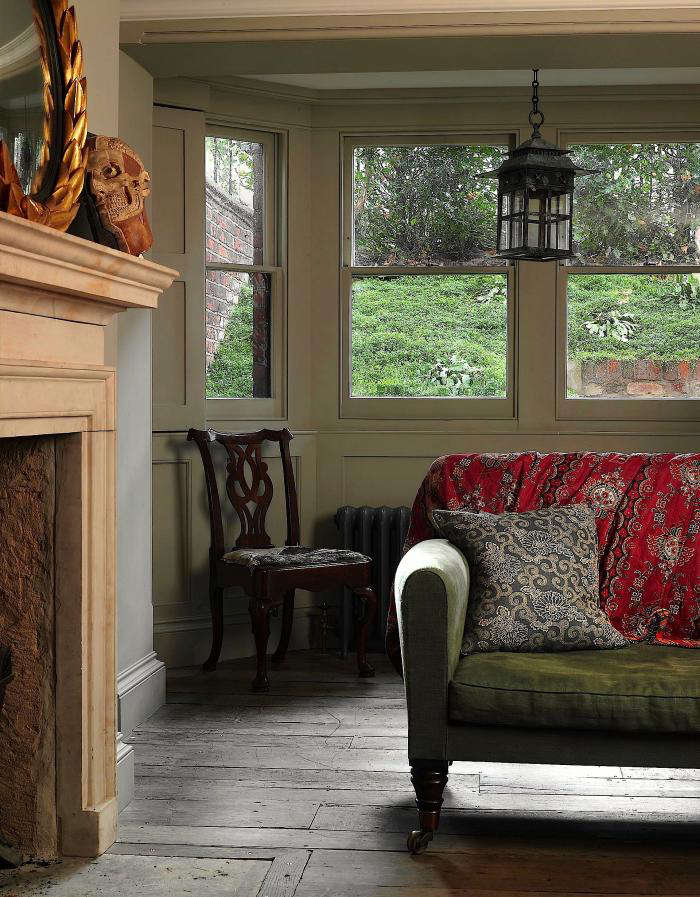 Above: The house is filled with lanterns from Jamb’s collection including the Ashbee lantern, a double pagoda design made of verdigris copper. 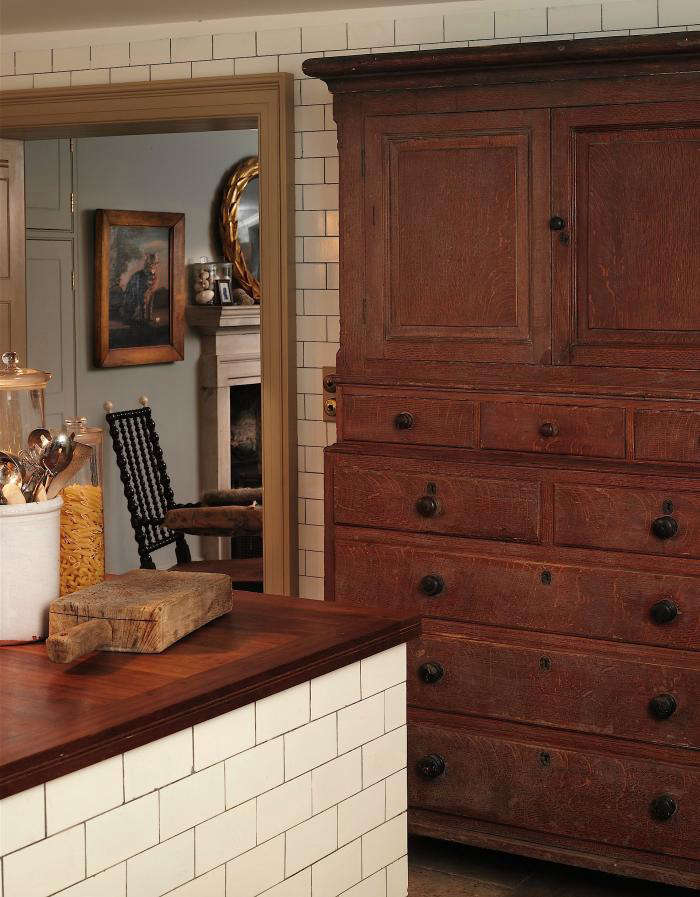 Above: The subway tiles in the kitchen are authentic in that they were salvaged from the New York subway. 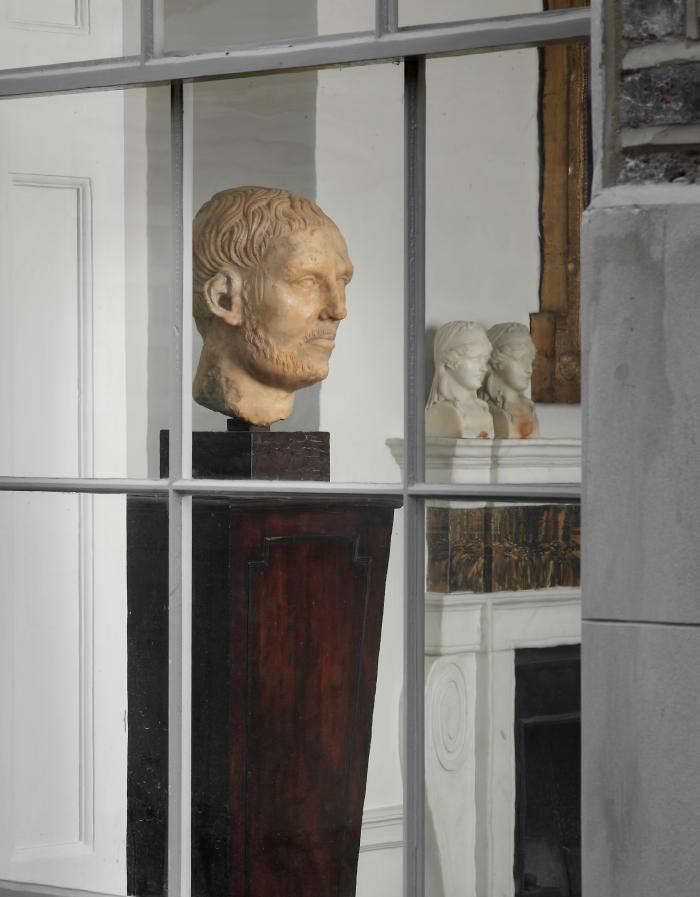 Above: Classical heads lend an air of stateliness. 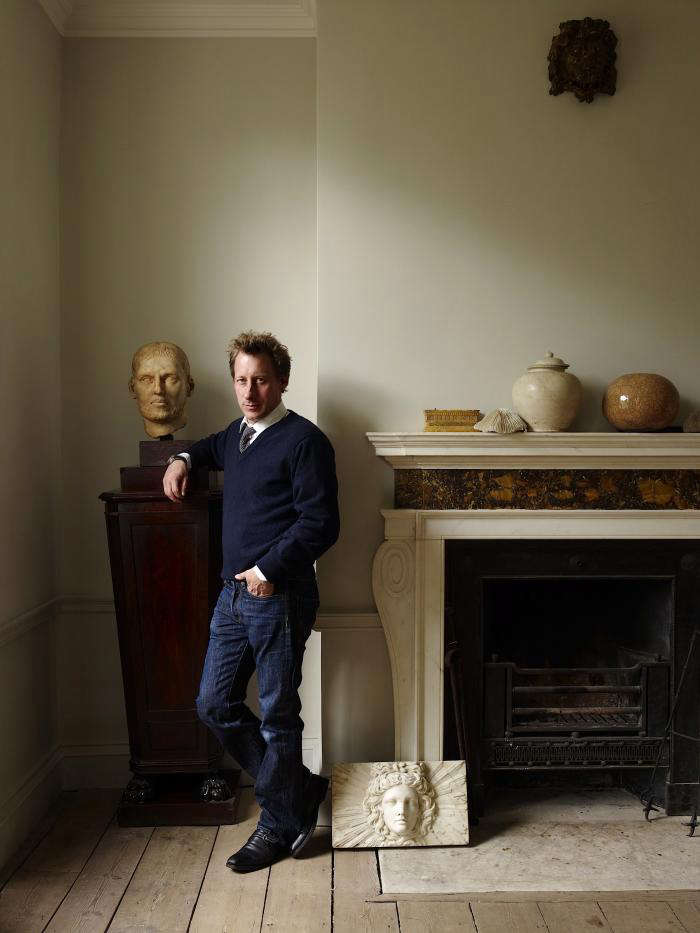 Above: London antiques dealer Will Fisher and a friend from the past refresh our view on antiques.

A River Runs Through It: A Family’s Barge-Turned-Houseboat on the Thames