Our friend Hugh Hales-Tooke, an accomplished fashion photographer, has recently returned to painting. At Meg Cohen Design Shop in Soho, through November 5, he is showing "Micrographia," a series of shadowy paintings of 17th-century buildings at Cambridge University designed by Christopher Wren and Robert Hooke. Hales-Tooke, who grew up in Cambridge, describes his work as an "investigation of architecture designed by men who were involved with the emergence of scientific investigation and rational thought." (Micrographia is Hooke's groundbreaking illustrated volume of organisms viewed through the newly invented microscope.) The paintings also represent Hales-Tooke's own sentimental journey—and restart. "I used exactly the same materials that I used in grade school. The buildings are portrayed in a simple, reduced way that hearkens back to trying to depict something for the first time," he says. 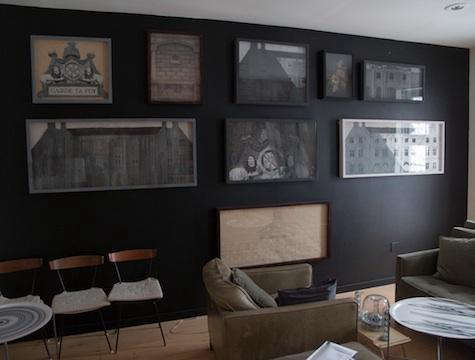 Above: After creating frames to match his paintings, Hales-Tooke painted a wall charcoal-black in his otherwise white living room—an inspired way to set off his black and white work and make it all of a piece. 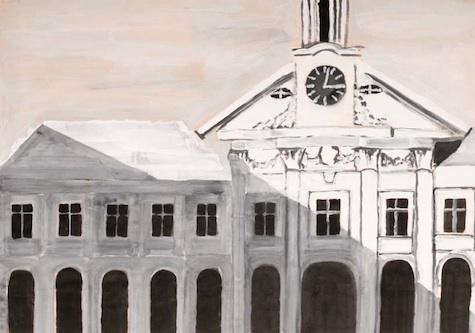 Above: Guston is a painting of Emmanuel College Chapel at Cambridge. Hales-Tooke allows the buildings to fill the frame, so that the results are akin to architectural elevations. He points out that unlike landscape paintings, elevations are timeless. "I wanted my paintings to make use of that same abstract space," he says. 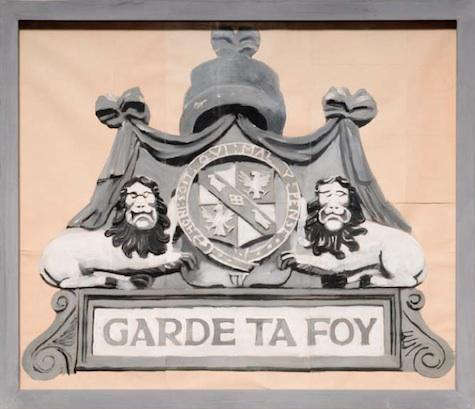 Above: Garde Ta Foy portrays the crest and motto of the university's Magdalene College, standing over an archway leading to the dining hall. The school's motto translates to "Keep Faith" or more literally, "Guard Your Liver." Hales-Tooke likes the latter as well as the fact that the lions, with their Restoration-style wigs, "look like a caricature of Charles II." 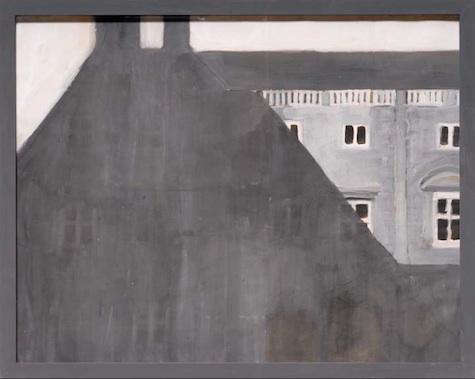 Above: Shadow depicts the Pepys Library, which houses Samuel Pepys' famous diaries as well as his personal collection of 3,000 books, arranged from smallest to largest. "Apparently, Pepys thought that 3,000 was the correct number for an educated gentleman to own because he kept that exact number and sold off books when he acquired too many, " says Hales-Tooke. "Even the oak bookcases Pepys had made are fascinating—they're modular."