Back in 1995, an Auckland family commissioned architect Pip Cheshire to design a vacation hideaway near Whale Bay, one of the nicest eastern coastal stretches in New Zealand. He modeled the structure after Fijian huts known as bures and similar constructions from Tonga called fales (with some Maori ideas laced in). Nearly 20 year later, the bure, now part of a family compound, is as inviting–and fresh looking–as ever. It was built for a “poet banker,” his partner, and their four kids, and functions as a main clubhouse–most of the bedrooms have since moved to separate buildings on the jungly hill overlooking the beach. Here’s a look at the cross-cultural compound. 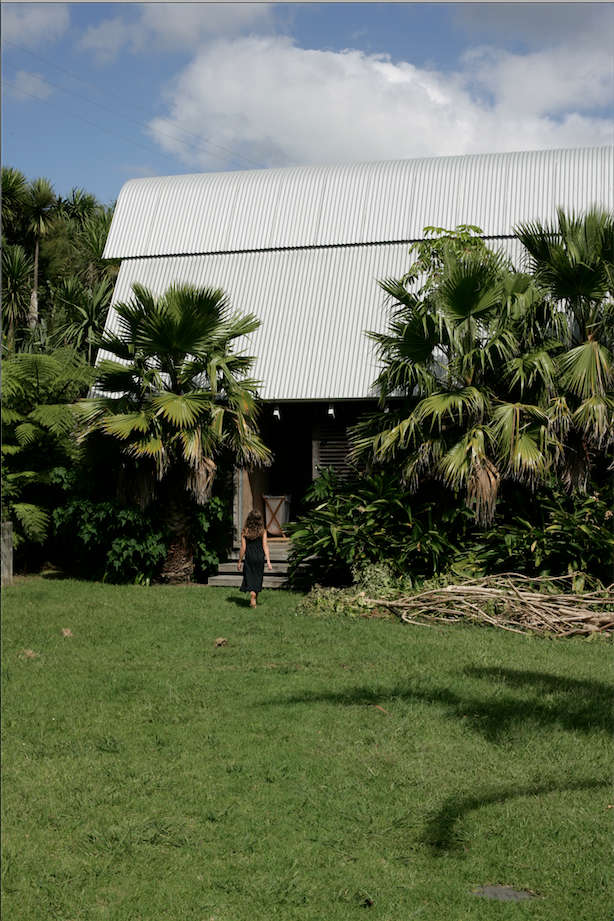 Above: Inspired by huts in Fiji and Tonga that have high, steeply pitched roofs of thatch resting on wooden posts and beams, the Davis Bure, as the house is known, weathers the elements with a corrugated metal roof. Cheshire notes that the young girl shown here is “traversing what might be considered the atea, a space that can be informal for camping and playing, then highly formal for speechmaking–these are Maori/Pacific notions, but I note that I and the clients are pakeha [Maori for European].”

Cheshire designed the structure when he was a director at Jasmax, one of New Zealand’s largest architecture firms; he has since founded his own practice, Cheshire Architects of Auckland, and works with his son, architect Nat Cheshire (watch for Nat’s own groundbreaking hut design in the coming weeks). 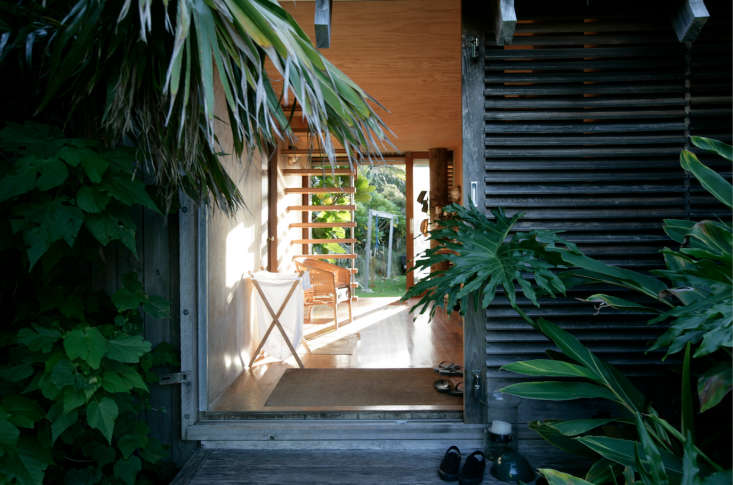 Above: “In the islands woven mats are used on the windward side between the columns to enclose the form and provide shelter, but our somewhat more temperate climate meant we used timber frame infill with big openings to capture the horizontal views out,” Cheshire says. The louvered walls are made of macrocarpa, a California pine introduced to New Zealand in the 19th century. 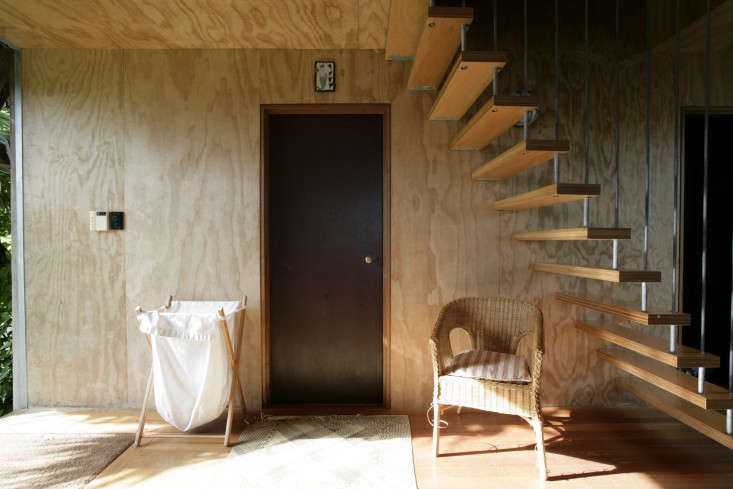 Above: The interior of the hut is a cocoon of plywood. “It’s basic New Zealand Pinus radiata–no stain, no finish at all,” Cheshire says. 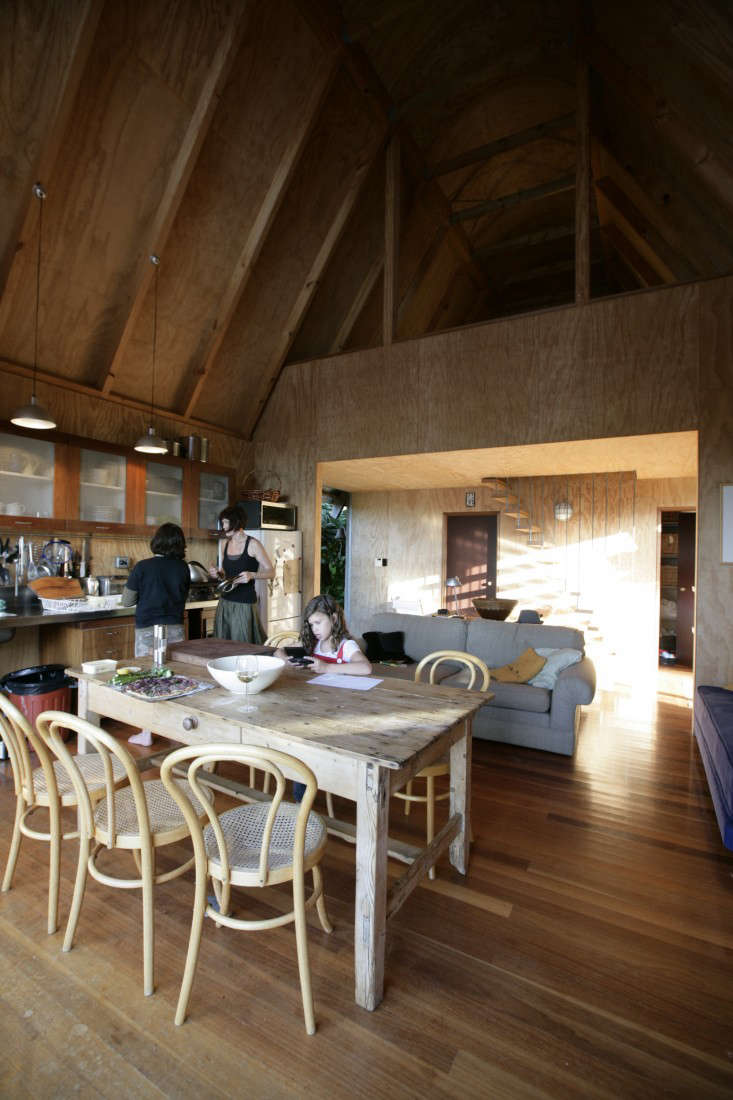 Above: The main room of the bure has a soaring ceiling and an open second story loft for sleeping. The floor is jarrah, a type of eucalyptus. 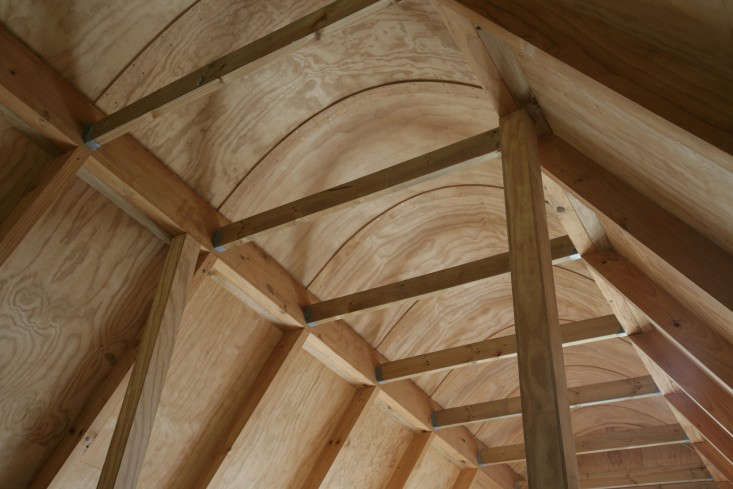 Above: “The rafters are a basic truss arrangement made from pinus radiata, which New Zealand grows by the billion,” explains Cheshire. “The roof is intended to be expressive of the enclosure of the Pacific way of building–lots of smallish bits of wood supported on a few very big posts.” 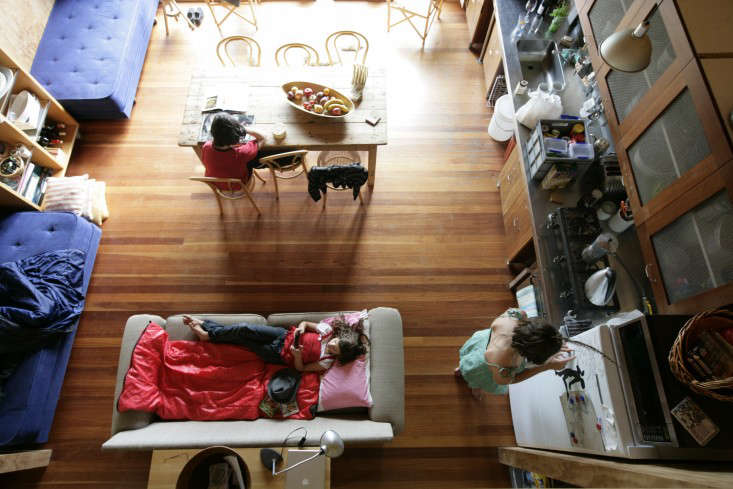 Above: A family weekend day in the bure. The house is used year-round–the area has a temperate, breezy climate. 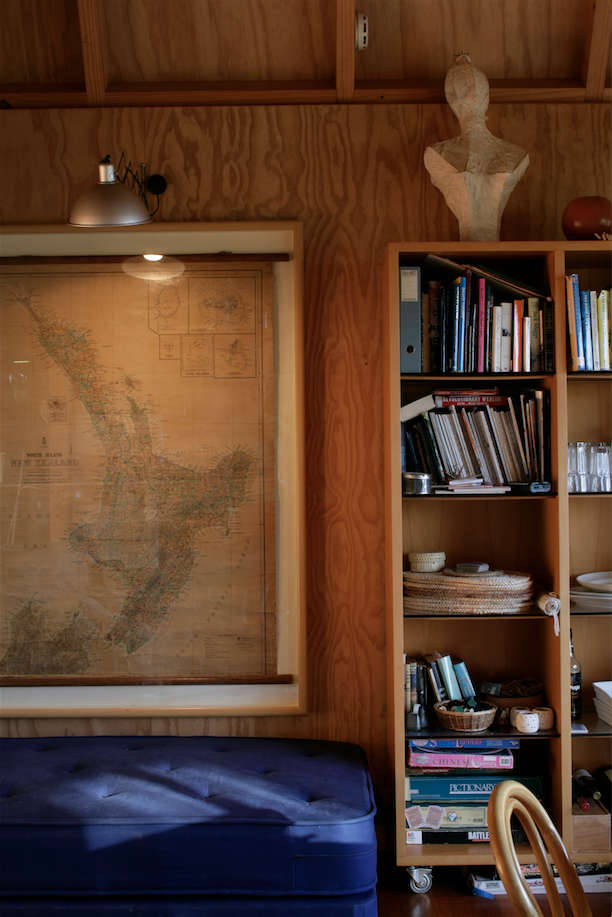 Above: Daybeds along the perimeter of the room are made into beds when the compound fills up. 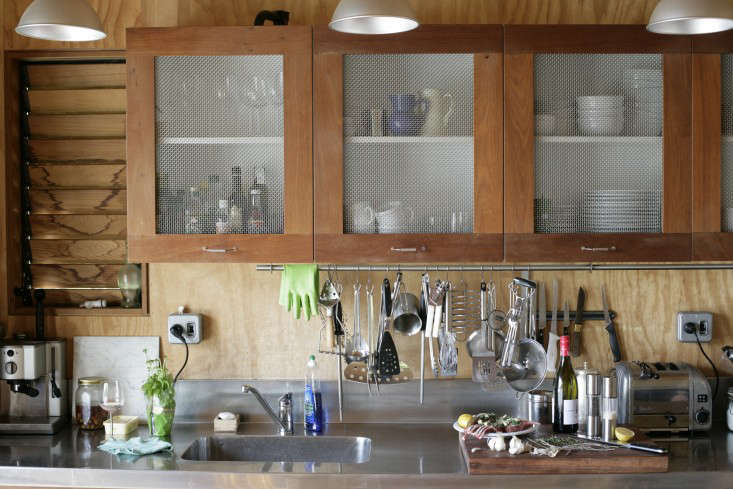 Above: The custom-built kitchen has cabinets of jarrah with a woven-steel mesh infill. The counter and integral sink are stainless steel. Mounted under the cabinets, a steel rail serves as a utensil catchall. 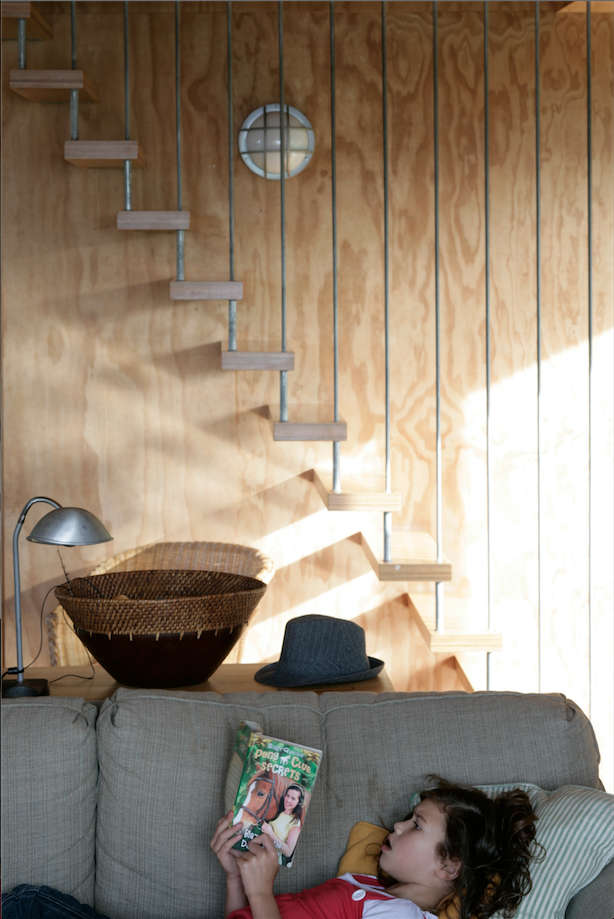 Above: Floating stairs of plywood with galvanized steel railings lead to the loft. Of the bar railings, Cheshire told us: “They’re very steep stairs and I wanted lots to hang on to.” 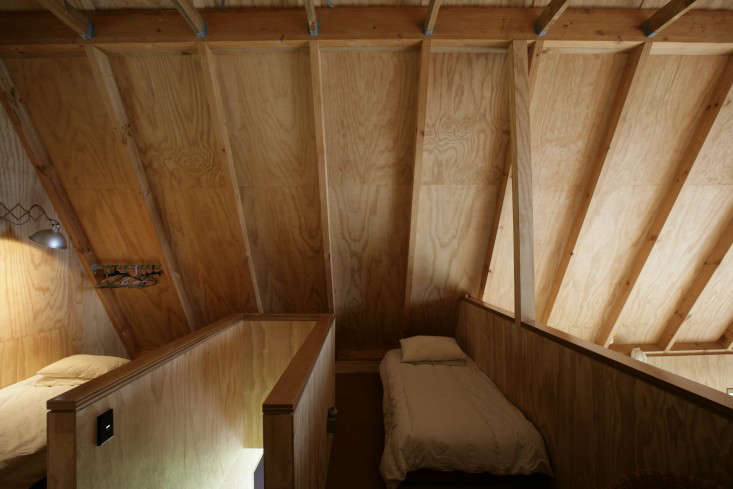 Above: Narrow kids’ beds are slotted under the rafters–initially the whole family of six could sleep in the house. Note the inset clothing rod and clip-on overhead light.

Above: The boathouse is one of several outbuildings that the family asked Cheshire to add to the site over the years. Built of dark-stained wood with a metal roof, it initially was built to house boats, but eventually a kitchen, work space, and some beds were added. It became, says Cheshire, “a sort of wharenui, a Maori house on the marae [a communal gathering place] for sleeping and living.” 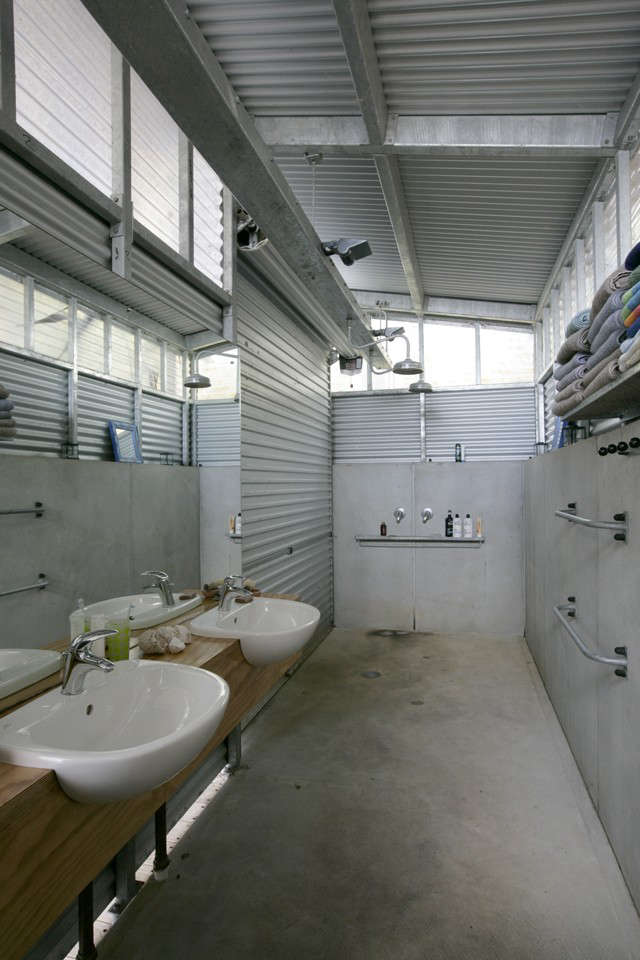 Above: The communal bathroom is made of concrete crowned with a prefabricated, galvanized iron structure. It’s located on the uphill side of the boathouse and has two sinks and two showers. The east side wall features a garage door that opens to offer bathers a view of a crescent-shaped bay, plus a few houses, and a shop–”not for the modest,” notes Cheshire. 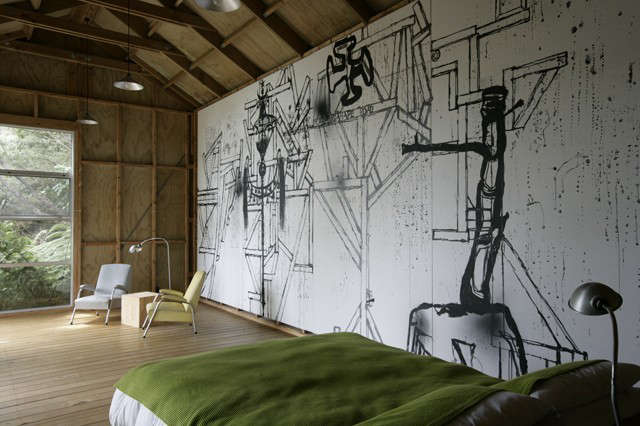 Above: A vast bedroom is located in what’s known as Sleepout 2, about 70 yards from the bure. Its mural is by Auckland painter John Reynolds. 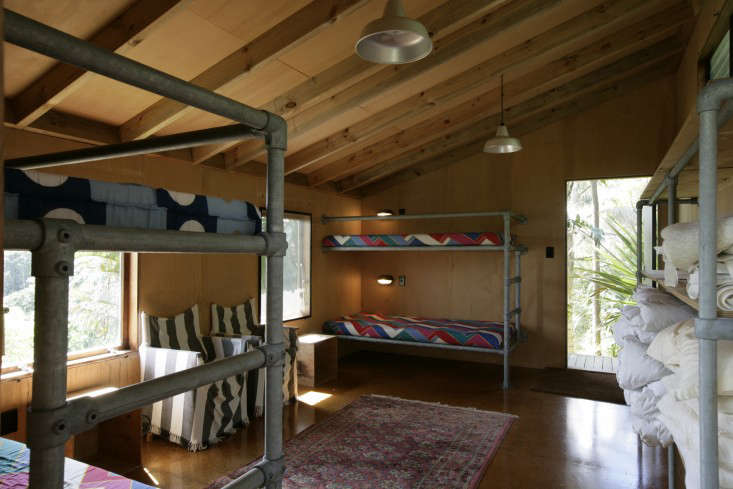 Above: A bunk room with built-in metal piping beds and storage shelves. 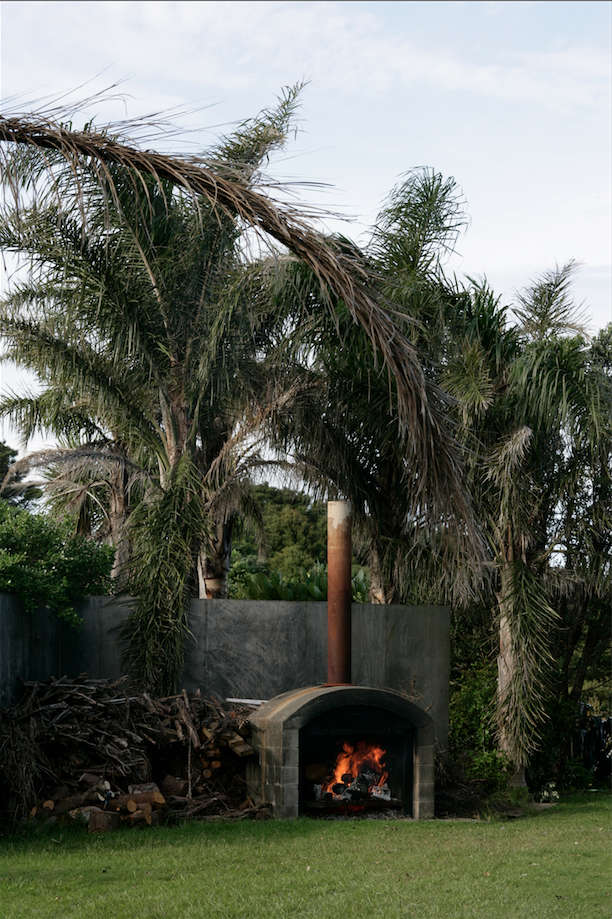 Above: An outdoor fireplace at the compound’s formal entry–for gathering to “stare at the stars, drink whiskey, and argue about Malevich et al.” 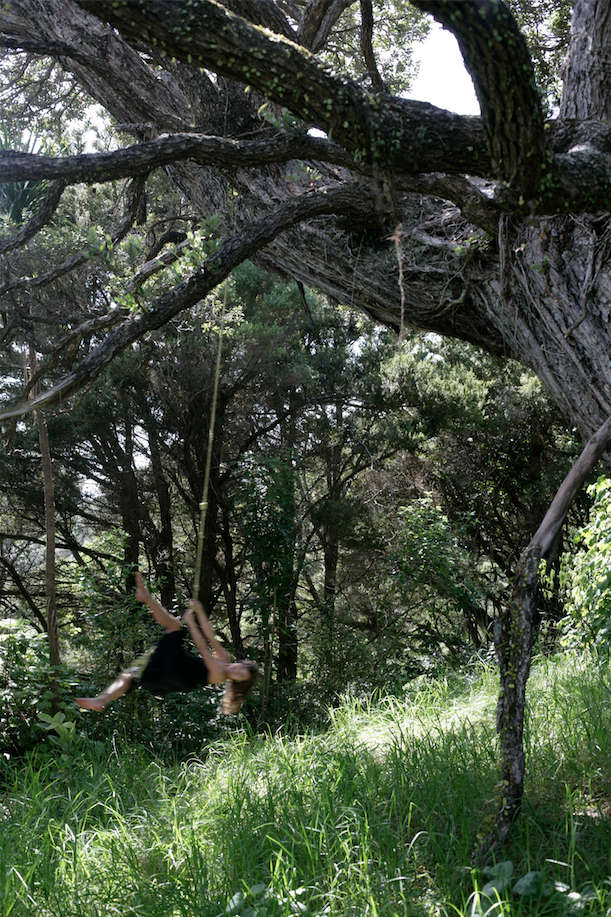 Above: The beach can wait. 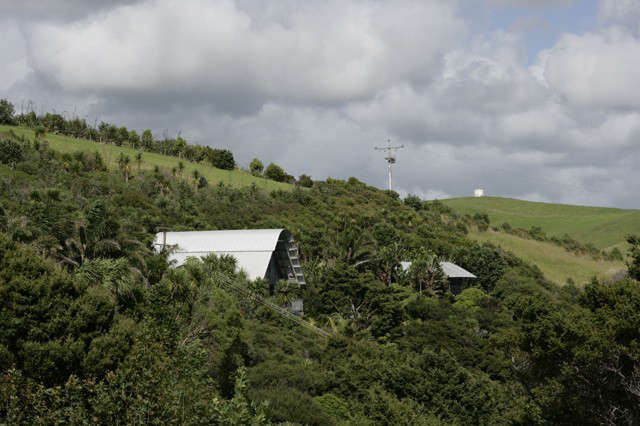 Above: A view of the hillside compound with the bure and the boathouse roofs peeking through the greenery. 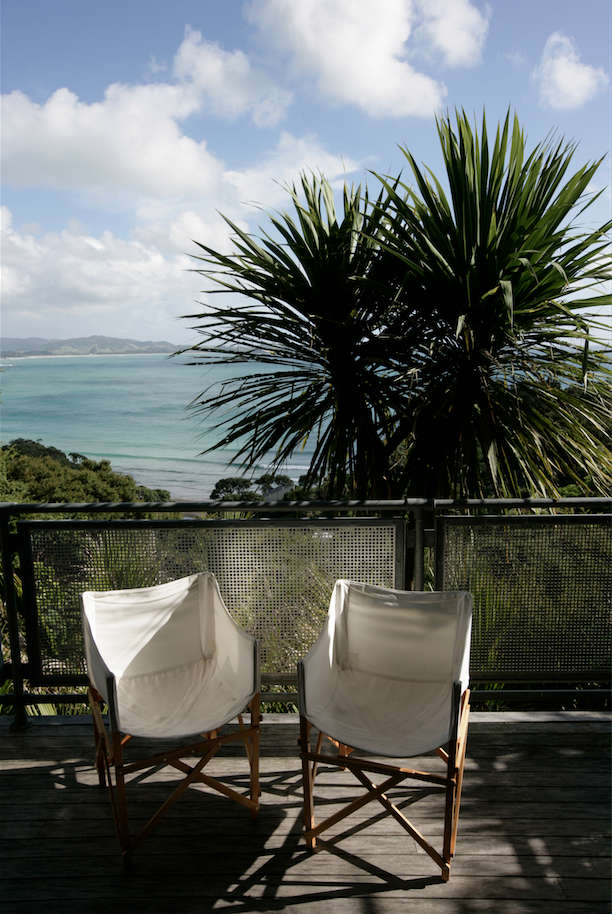 Above: Off the main room of the bure, a terrace offers prime ocean views. Whale Bay, the area’s crown jewel, is a 20-minute walk through the bush.

Above: Woolleys Bay is one of several beaches just below the compound.

All this week, we’ve been exploring design Down Under. Looking for more Beach Designs? Explore our archive, including A Pair of Fisherman’s Cabins Turned Beachside Cabanas in Portugul and Bathing en Plein Air: 29 Outdoor Summer Showers. On Gardenista, learn how to install your own outdoor shower in Hardscaping 101.

In collaboration with: Happier at Home: 7 Tips for Getting a Good Night's Sleep in Summer