Two tiny cabins owned by two friends in New Zealand offer an important reminder: a retreat need not be massive to offer a peaceful hideaway.

Designed by firm principal Nat Cheshire of Aukland-based Cheshire Architects, the cabins are two projects for two clients: friends who pooled their money to buy a plot of land on a moody, remote estuary in northern New Zealand. They built their own shed cabin atop it, and took turns sharing it before deciding that two tiny, but very special, homes would better suit their needs.

The result is a pair of structures full of dichotomies: They have small footprints but stick out jarringly from the landscape. They’re basic plywood buildings, but with luxurious details inside. And one is black, the other light. 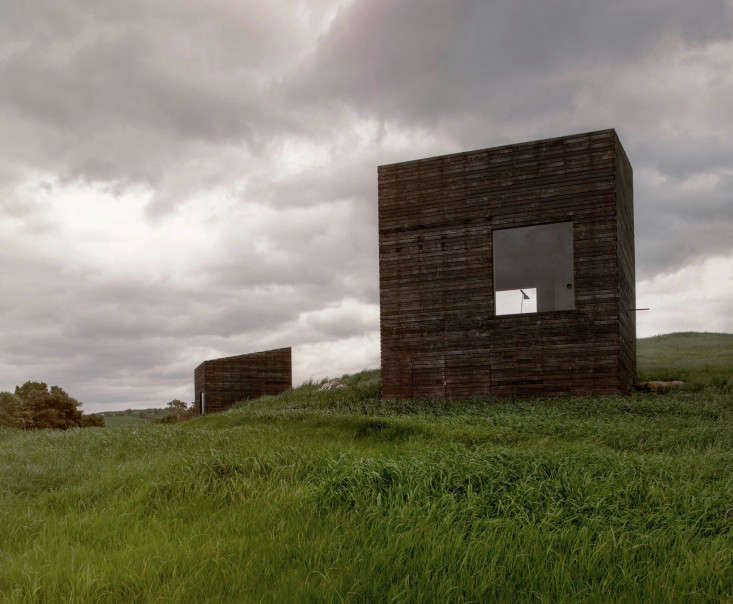 Above: The cabins’ charred wood exteriors make them contrast with the landscape, but their lack of conventional “house” details–like a pathway from the road or a front door–make them look like objects that might always have been there. Says designer Nat Cheshire, “In that big, long grass it feels more like these were boats tied up at moorings in a slow-motion ocean.” Photograph by Jeremy Toth. 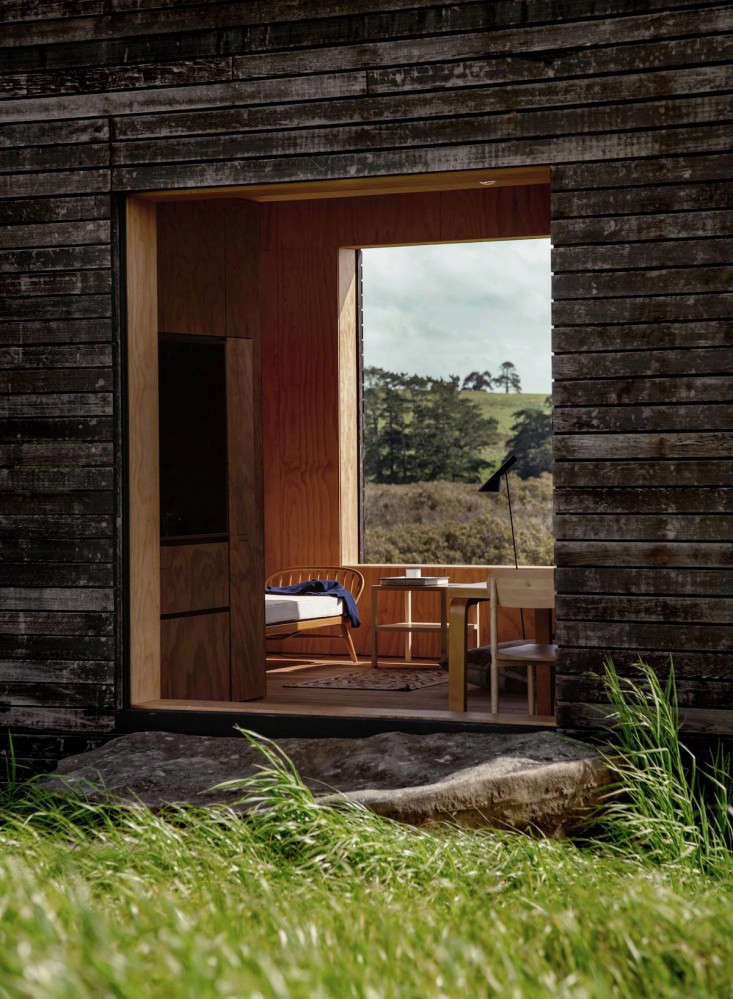 Above: Each cabin has two openings: one serves as an entrance, the other as a window. But the entrance is not a door–instead, visitors step up onto a boulder to climb inside the large opening. “We hoped that in subverting the shorthand language of building, these little constructions might feel like something other than–and more than–houses.” Cheshire’s office spent days figuring out how to lock the openings without any visible hardware. Photograph by Jeremy Toth. 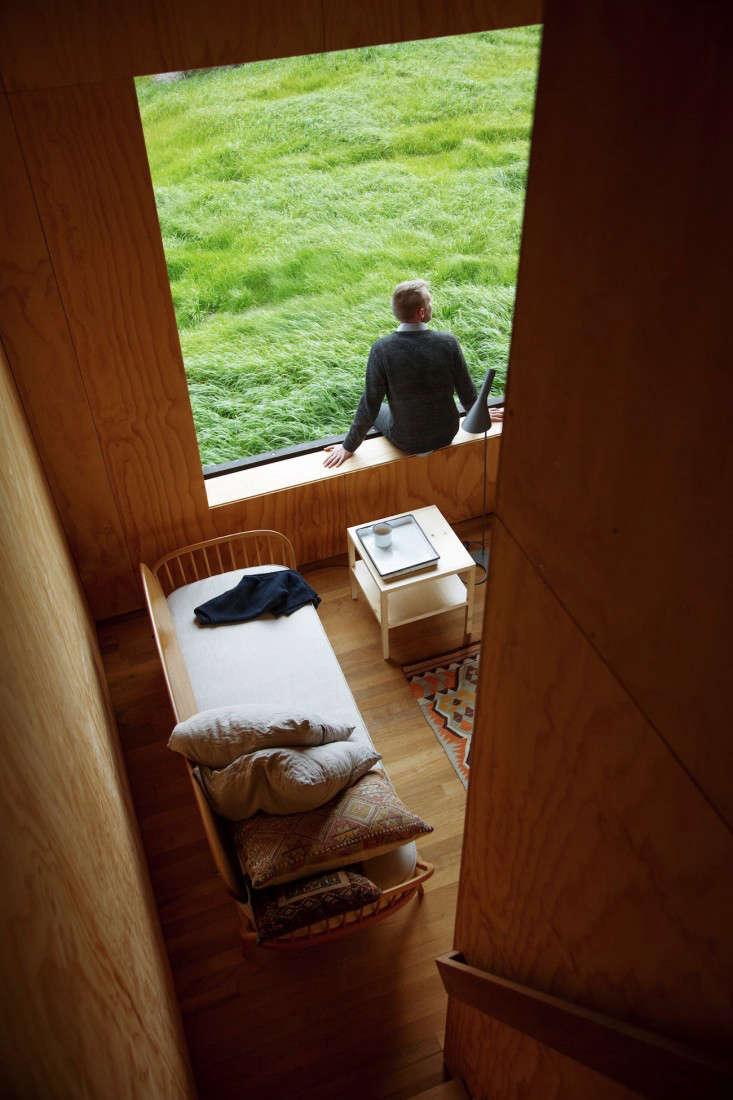 Above: The light cabin’s interior is plain builder’s plywood. Here, an occupant enjoys the water view from the open “window.” Photograph by Jeremy Toth.

Ostentatious second homes were not in the budget for this project but weren’t wanted, anyway. The petite cabins were created in part as a reaction to overly large, little-used vacation houses. “Holiday homes have become this country’s decadence,” says Cheshire. “We wanted a different vision for New Zealand’s coastal future.”

The cabins are entirely off the grid, and each has a bathroom, kitchen, living room, lofted sleeping space, and outdoor shower. For ventilation, wood hatches open in the bathroom and sleeping lofts. 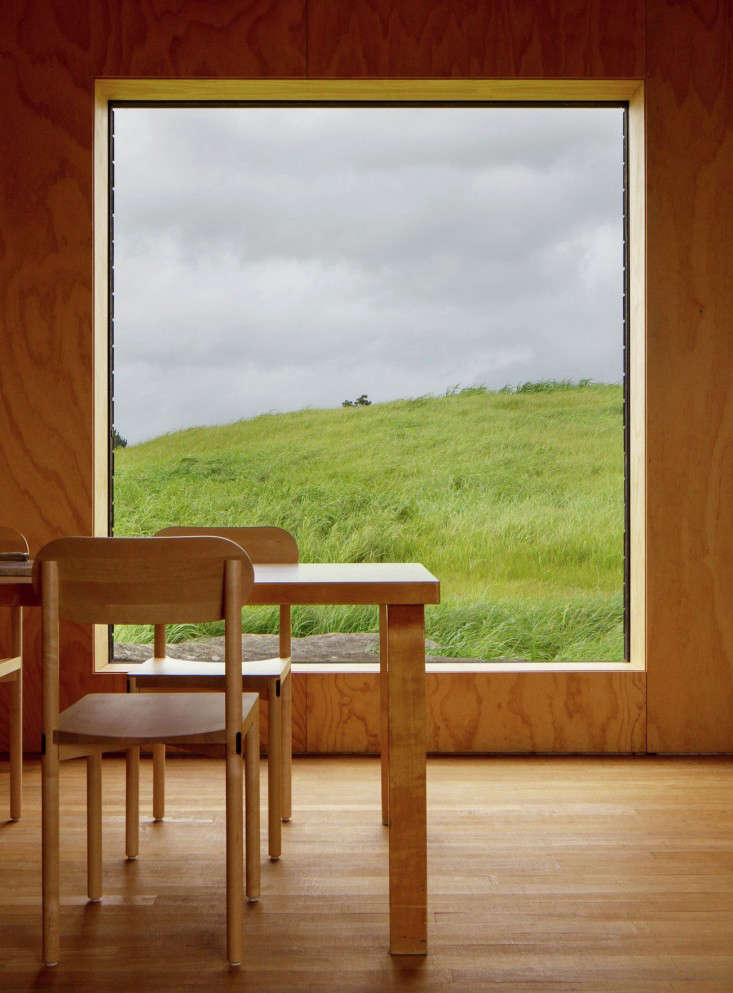 Above: The entryway of each cabin looks inward toward the land. Photograph by Jeremy Toth.

The estuary-side plot was zoned for a single 1,500-square-meter (16,145-square-foot) house. Since this plan called for two separate dwellings–albeit at 29 square meters (312 square feet) each–Cheshire and his clients had to argue their case for special permission to build. In total, the two cabins required just over eight sheets of plywood. 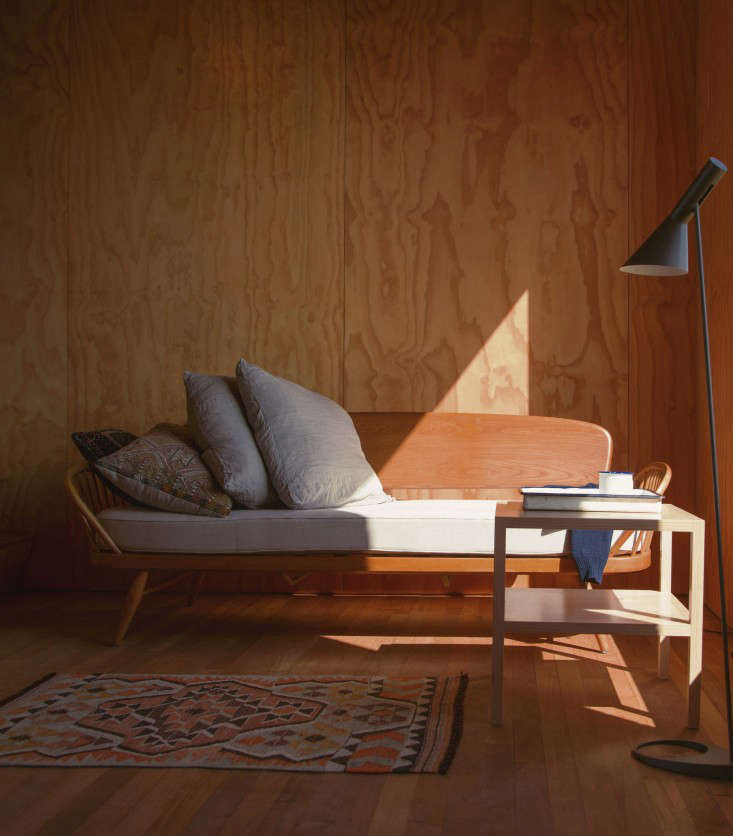 Above: The designer and owners liked the idea of adding luxurious details inside and wanted each interior to be distinct, one bright, the other moody. Says Cheshire, “There’s a responsibility with objects of that scale that someone who is bold enough to commission it deserves to be delighted in every junction.” Furnishings in the light cabin include an Ercol sofa and AJ floor lamp by Arne Jacobsen. Photograph by Jeremy Toth. 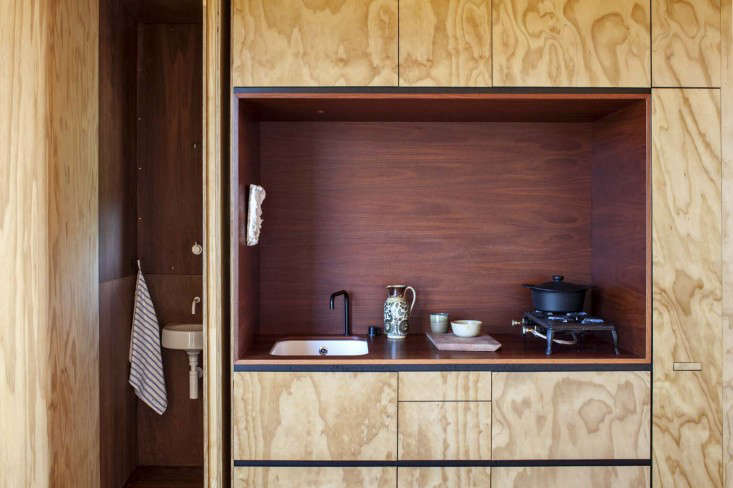 Above: Each kitchen has a small sink, refrigerator, gas stove, and dishwasher drawer. In the light cabin, the kitchen nook is lined in oiled jarrah eucalyptus wood. At left, the small closet bathroom. Photograph by Darryl Ward. 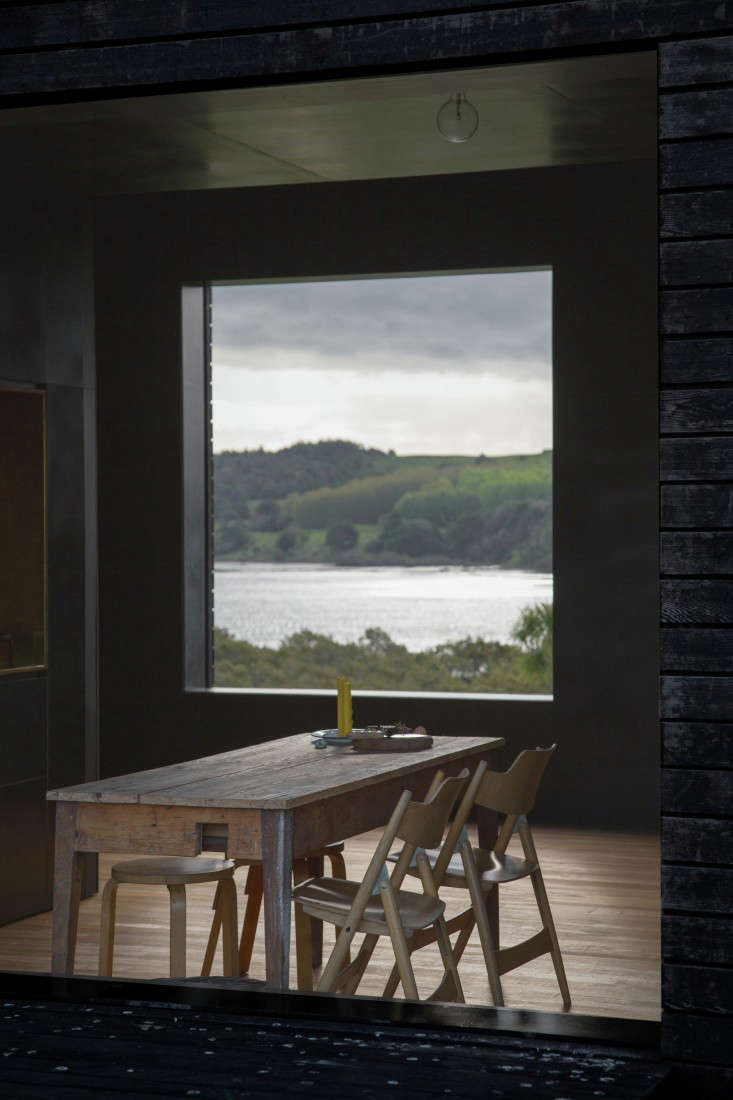 Above: The black cabin’s view of the mangrove inlet. Rather than adding walls of glass to immerse the cabins’ occupants in the landscape, the architect actively avoided an indoor/outdoor experience. “The cabins are a retreat from the landscape rather than a saturation in it,” he says. Photograph by Jeremy Toth. 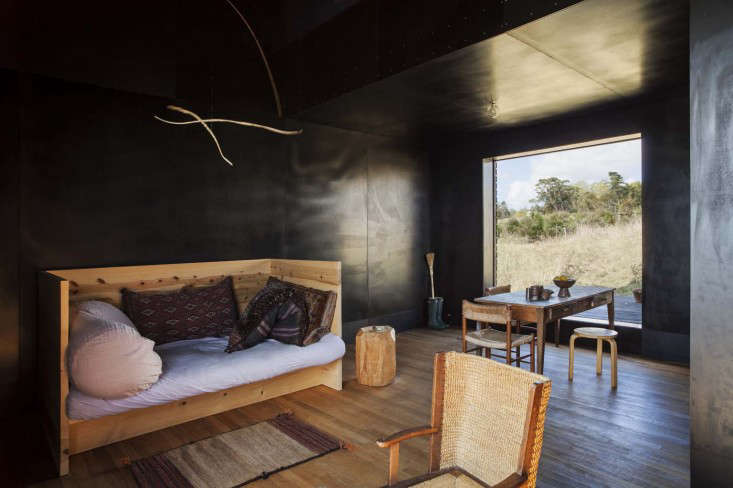 Above: The black cabin is lined in form ply–low-cost panels covered in polished black coating–which creates a deep, inky space. Says the owner: “At night, if there’s just a couple of candles going, the panels have a sheen that’s quite disconcerting; it’s like you’re sitting in a void, or outside.” Furnishings in the black cabin include a daybed by Donald Judd and an Eleanor Cooper twig mobile overhead. Photograph by Darryl Ward. 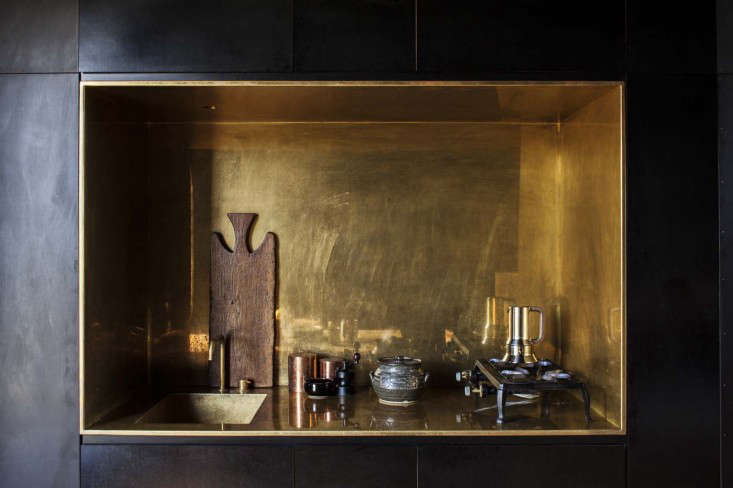 Above: The black cabin’s kitchen has the same appliances as the light cabin but is lined in glamorous brass paneling. Photograph by Darryl Ward. 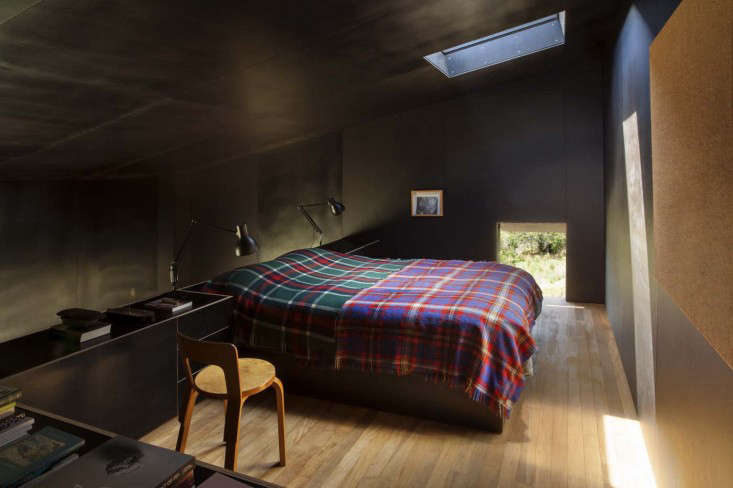 Above: The dark cabin’s sleeping loft, with a skylight overhead for viewing stars. Photograph by Darryl Ward. 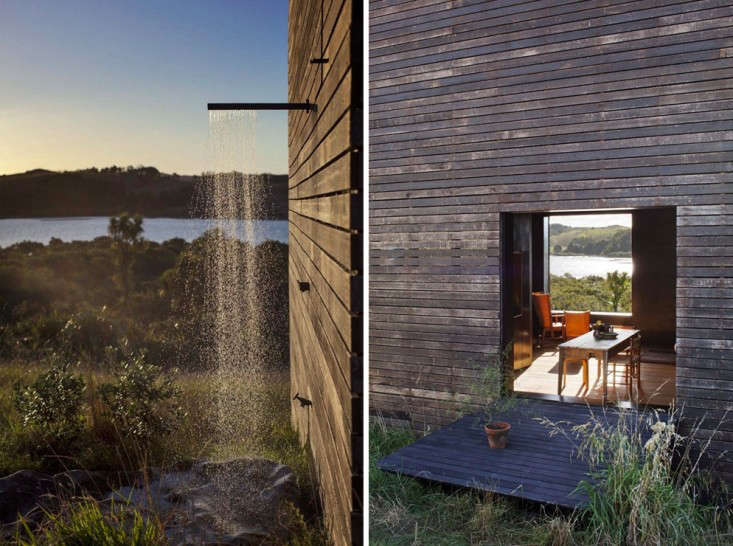 Above L: Both cabins’ showers are outdoors, facing the water. R: The entrance opening of each cabin doubles in function as a small deck. Photograph by Darryl Ward. 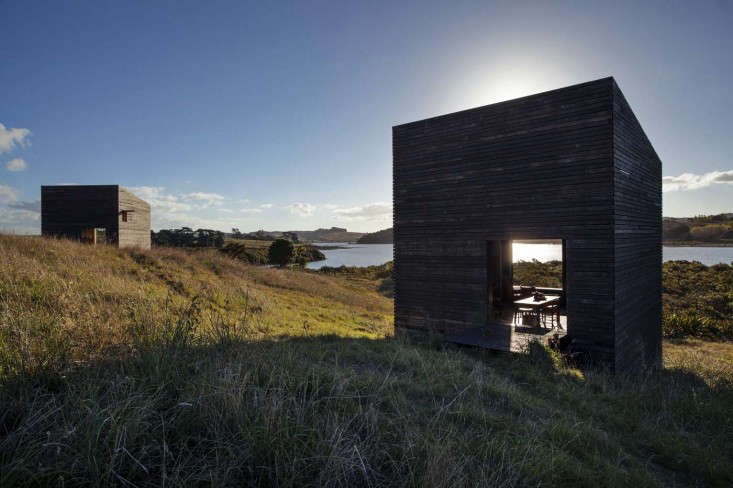 Above: Cheshire wanted the cabins to exist boldly in the landscape, to “invoke the kind of dislocation that might stop you in your tracks, and help you see anew.” Photograph by Darryl Ward.

Kitchen of the Week: A Hamptons Kitchen with a Custom Island Sourced on Etsy

Trending on Gardenista: Gone to the Dark Side

‘Every Piece a Statement’: A Refined Malibu Home for a Father and Son, by LA Designer Brigette Romanek