Alayne Patrick of New York cult boutique Layla produces her clothing, housewares, and jewelry in Jaipur and other parts of India. “I feel at home when I’m there,” she says–which explains how her Carroll Gardens, Brooklyn apartment came to feel like a colorful hideaway in Rajasthan.

Alayne first visited India in 1998, and has been returning to Jaipur several times a year ever since. Initially part of a small ex-pat community there, she now belongs to an impressive crowd of creatives that include, among others, John Robshaw, Marie-Anne Oudejans of Tocca, jewelry designer Sarah Beltran of Dezso, and Caroline Weller of Banjanan. At the time of her first trip, Alayne was a fashion stylist in New York; when she returned to the city, the models she worked with started asking to buy the tunics and silk pillows and gold earrings she had lugged home with her. That’s how she found herself opening Layla, her boutique in Boerum Hill, Brooklyn, which also has an outpost on the mezzanine floor of ABC Carpet & Home in NYC next to Erica Tanov (Layla in Brooklyn is currently being readied for spring and is about to throw open its doors again).

Layla is stocked not only with Alayne’s India finds but with her friend’s designs and her own line of block-printed cotton fashions: “A lot of the clothes I brought back from India didn’t quite translate here. That’s how I ended up as a designer. I make things I want to wear.” Similarly, her garden apartment is filled with a mix of things she’s gathered on her journeys; the result is a space that is bright yet tranquil–and extremely inviting. Come see. 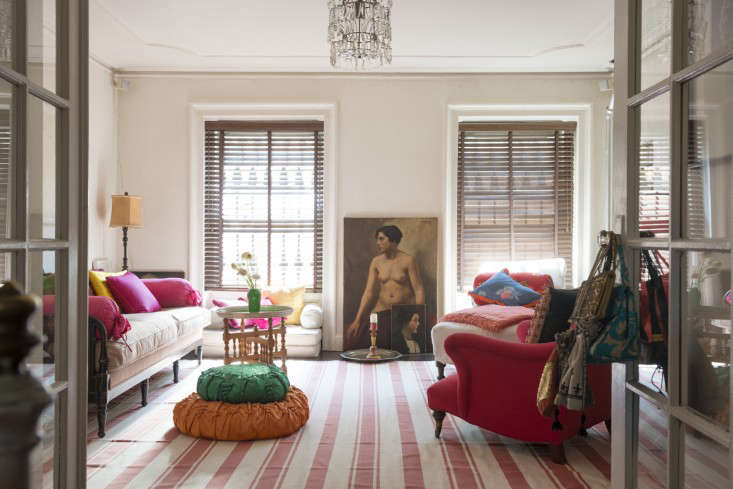 Above: “My apartment is tiny–it’s 500, maybe 600 square feet,” says Alayne. She overhauled the railroad flat herself after striking a deal with her landlord: “The place had all of its original details but it was in terrible shape. I got him to give me a month’s free rent and allow me to redo it as I wanted.” In the sitting room, that involved restoring the wood floor and tin ceiling.

Of her mix of reds, pinks, and more, she says, “You go to India and you think, this is how I want to live. Color makes people happy.” On her walls, she sticks with white, but tries a lot of options: “I’m always having to repaint to get them right.” In this room alone she used several Ralph Lauren White Washes, including Picket Fence White, Petticoat White, and Chalk White–different shades for walls, trim, and ceiling. The orange and green silk and cotton floor cushions are from Liwan, a Lebanese boutique that’s her favorite store in Paris. The crystal and pewter chandelier is from Clignancourt, the Paris flea market; Alayne carried it home on the plane in her lap. 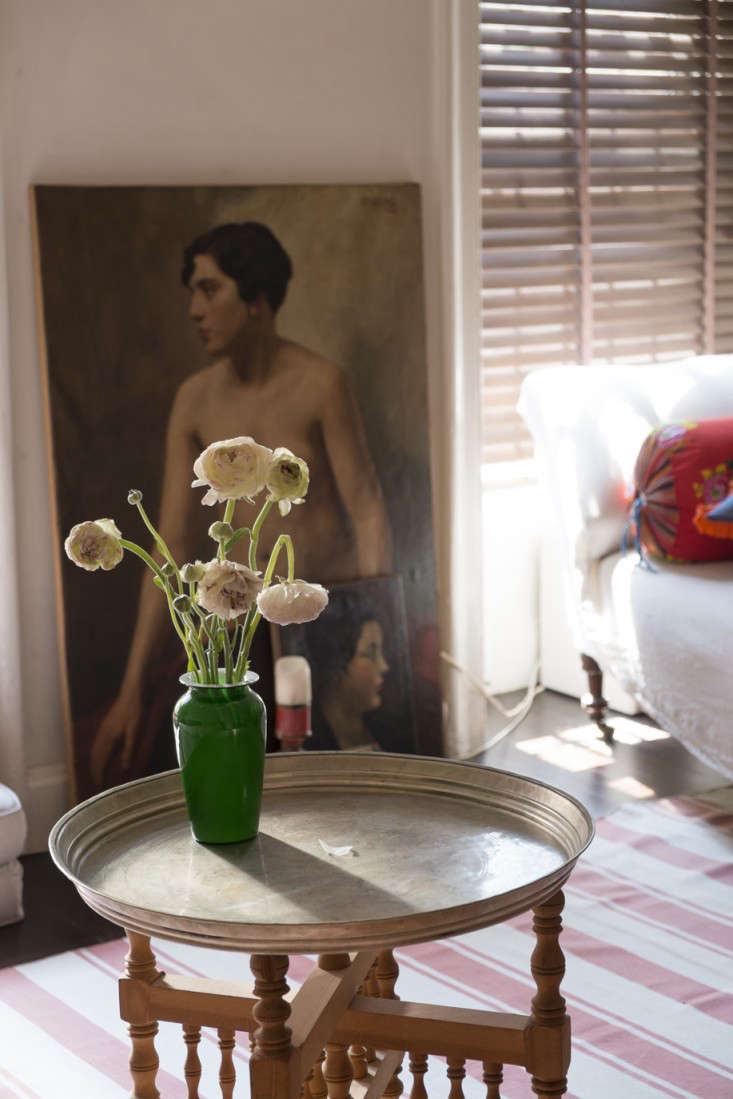 Above: The portrait that anchors the living room is a long-ago flea market find likely painted in Eastern Europe in the 1910s, she says. The tray came from John Derian, and the wooden base is from a stand in the Chelsea Food Market. Alayne had the dhurrie made in Delhi on her first trip. 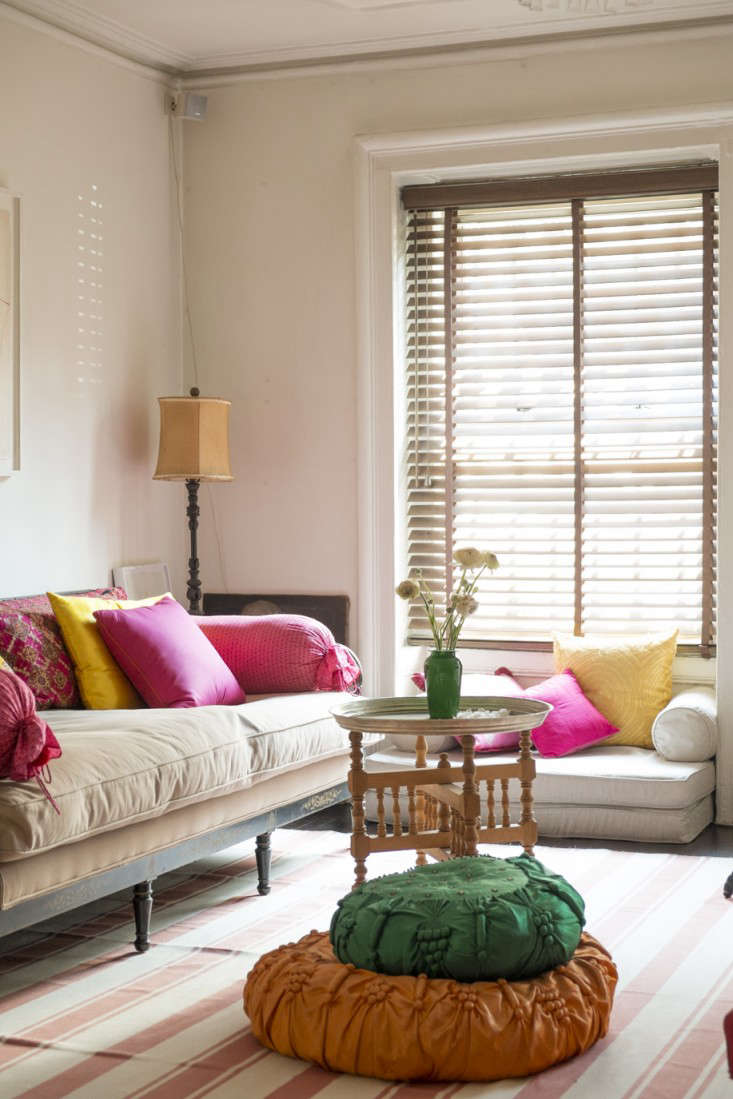 Above: Alayne’s caned settee is an American antique that she bought 25 years ago and had restored and reupholstered with a feather bed and cushions in straw-colored twill. It’s piled with Indian silk pillows, which she also uses on her window seat. “I have too many pillows,” she says, “but when they really do get used. This place is small and when I have people over, we often sit on the floor. And when it’s warm out, a lot of the pillows get used in the garden.” 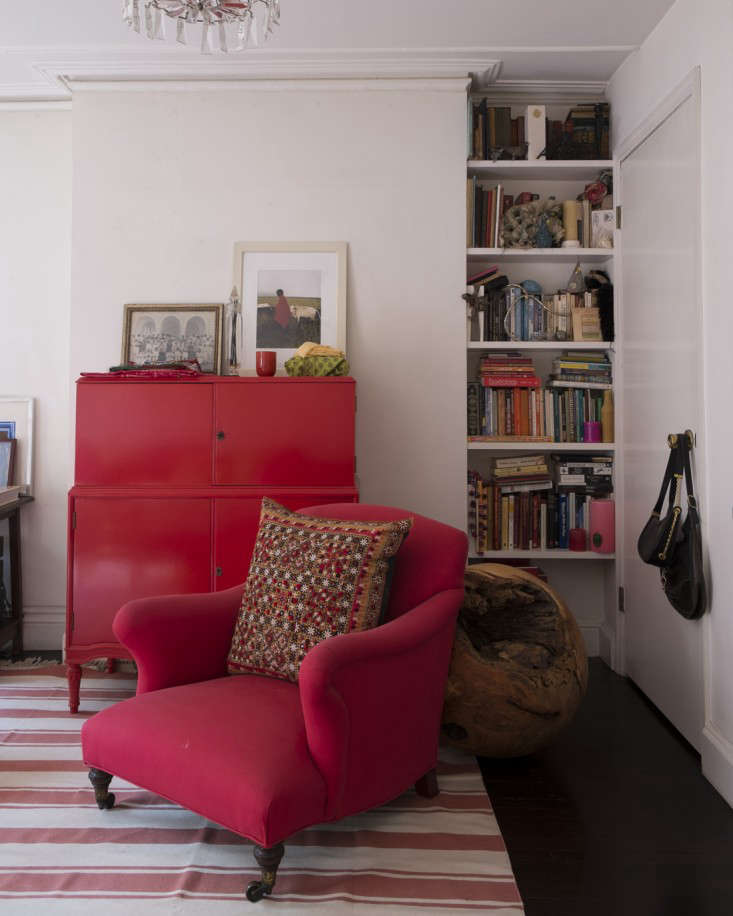 Above: “Pretty much everything fancy in my apartment, like my red George Smith armchair, was a gift,” says Alayne. She pairs it with a vintage cupboard, formerly painted avocado green with flowers: “I had it properly lacquered. I spent a lot on it because and I really needed storage.” She added more storage by inserting shelves in the recessed wall. The curious burl is by Keith Holamon, a Brooklyn artist friend who makes sculptural spheres from found wood. 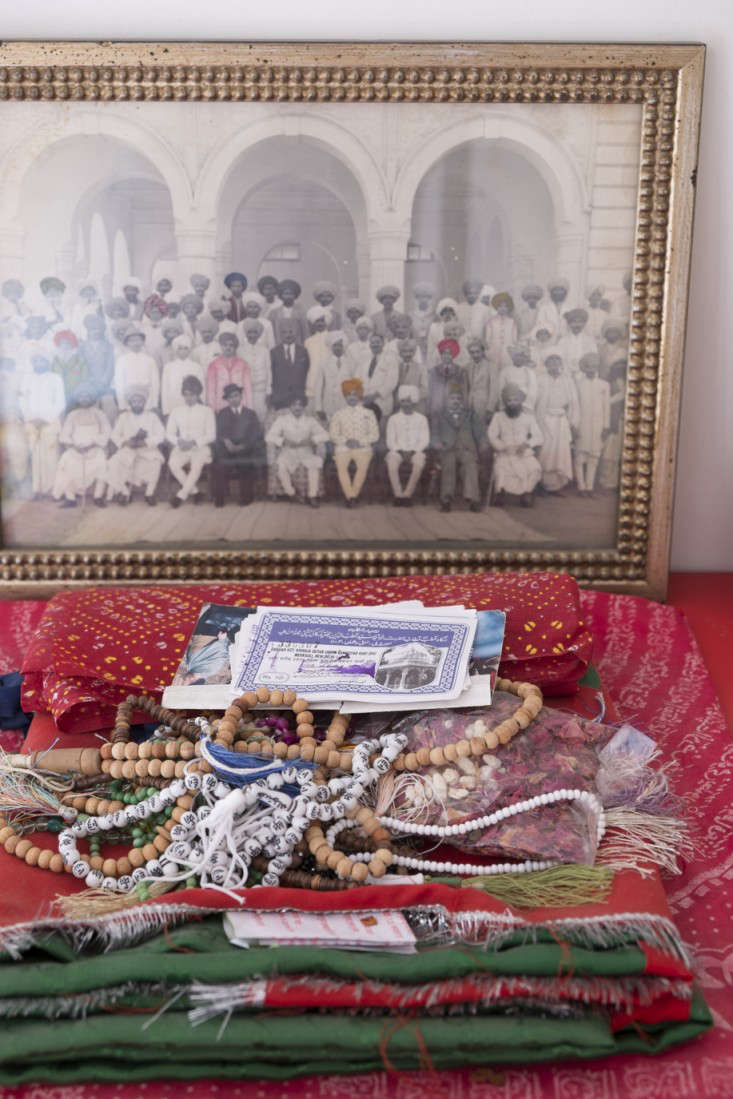 Above: The lacquered cabinet holds prayer beads and blessed fabric from visits to holy sites in India. The vintage group photo is a piece by Alexander Gorlizki, another Brooklyn (and Jaipur) artist friend who specializes in his own version of Indian miniatures (in this example, he inserted painted details). 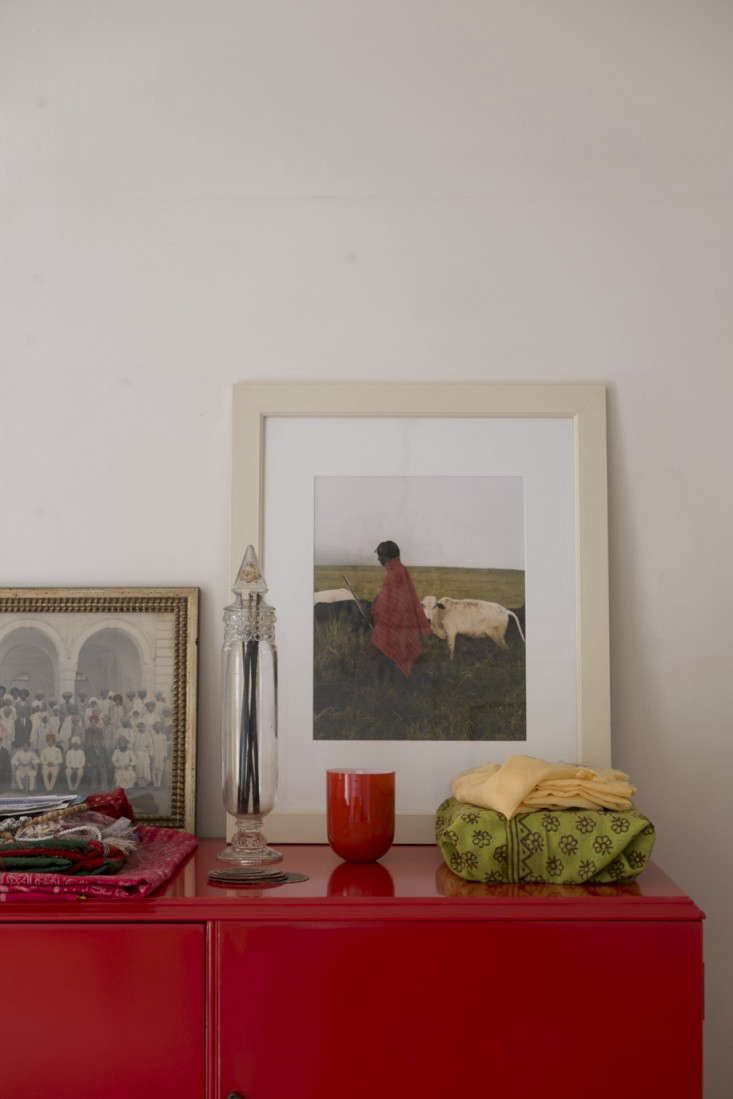 Above: A John Huba photograph of a Masai shepherd rests behind a vintage crystal container that holds Alayne’s favorite incense: she swears by Fred Soll’s Resin on a Stick. 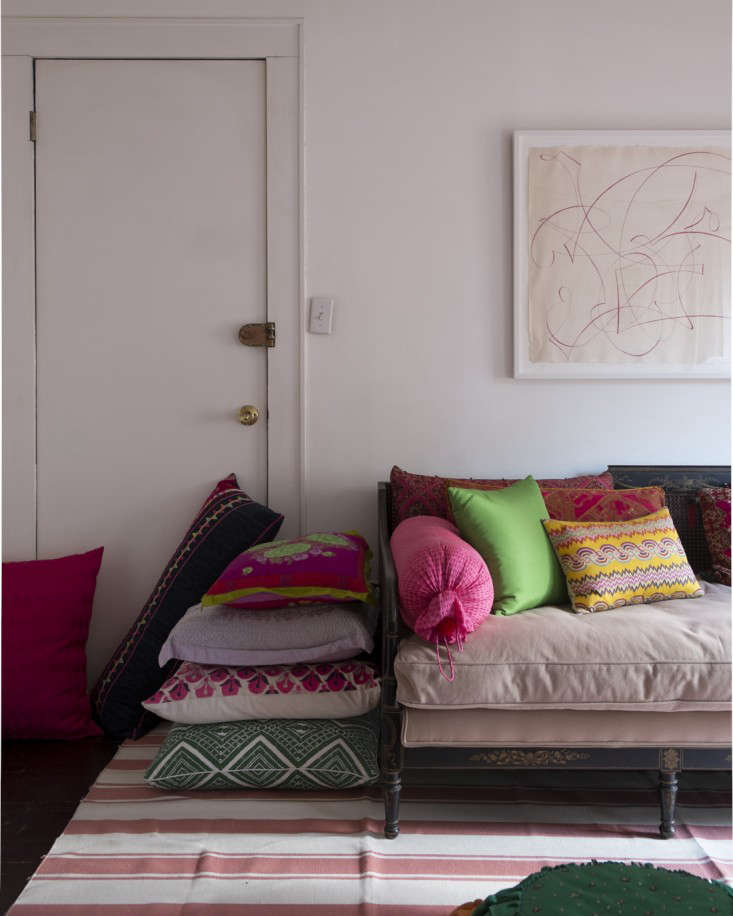 Above: Pillows by John Robshaw, Lisa Corti, and Emerie et Cie are stacked in front of the unused front door. The framed ink on paper drawing is by Elliott Puckette. (See more of Puckette’s work on page 174 of The Remodelista book.) 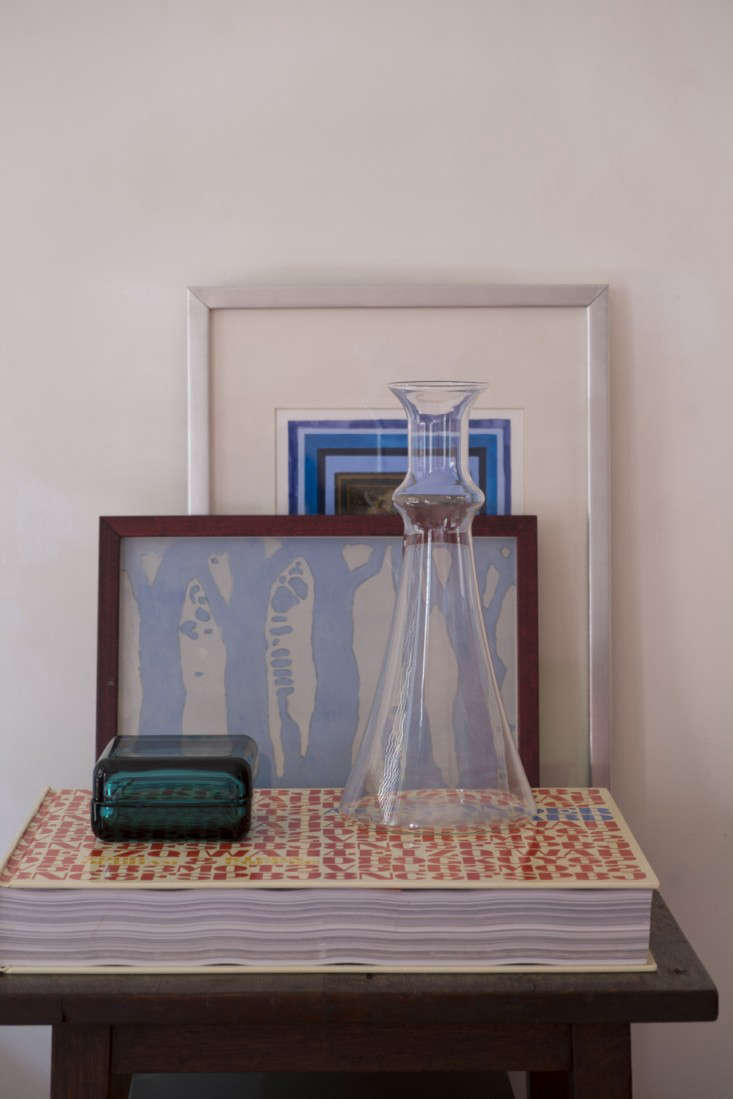 Above: Every inch of the apartment displays evidence of Alayne’s past life as a stylist. Here, a Mission Oak table holds a layered still life that includes a notched beaker and a painting of blue trees by LA artist Cannon Hudson. 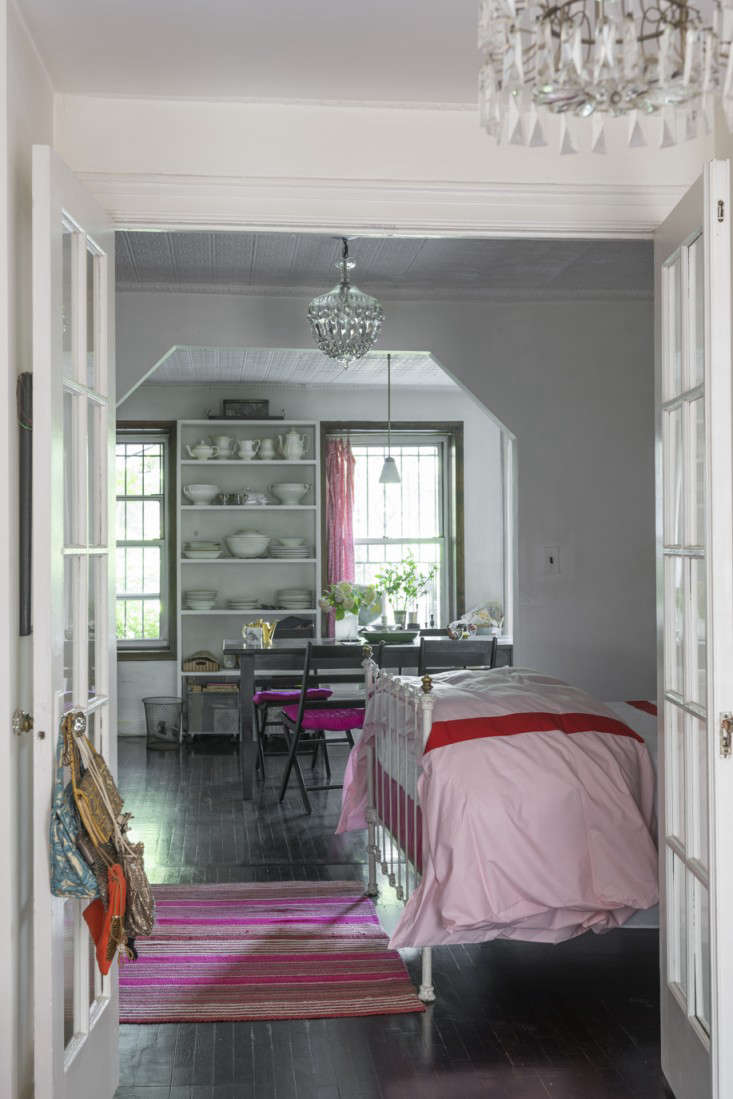 Above: French doors divide the living room from the bedroom and kitchen. Alayne’s pale pink duvet with red stripes is from Olatz, as are the red-bordered sheets: “I have to say her bed linens are the most beautiful. I saved up for those.” The striped Bolivian rug is from John Derian. 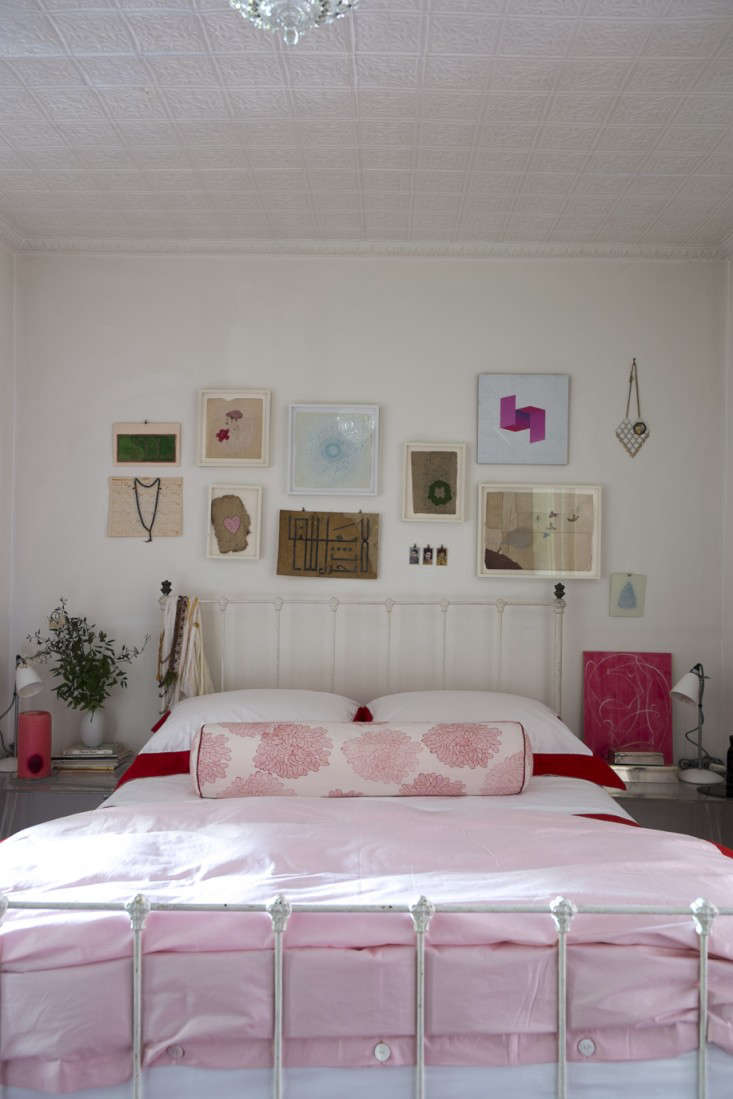 Above: Alayne’s iron bed is another flea market piece that she painted. She had the bolster made in India. 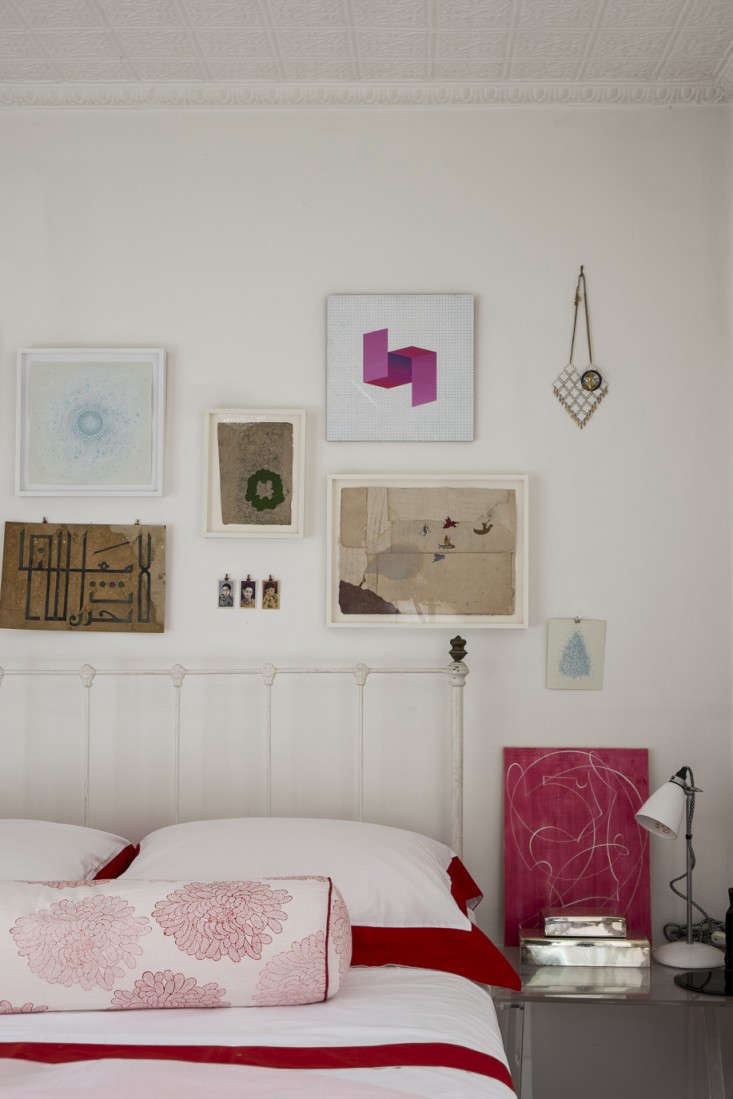 Above: The art above the bed is unified by white frames and includes vintage cigarette cards from India and Hong Kong. Resting on the bedside table–a 1970s Plexiglas TV tray–is a hot pink painting by Elliott Puckette. 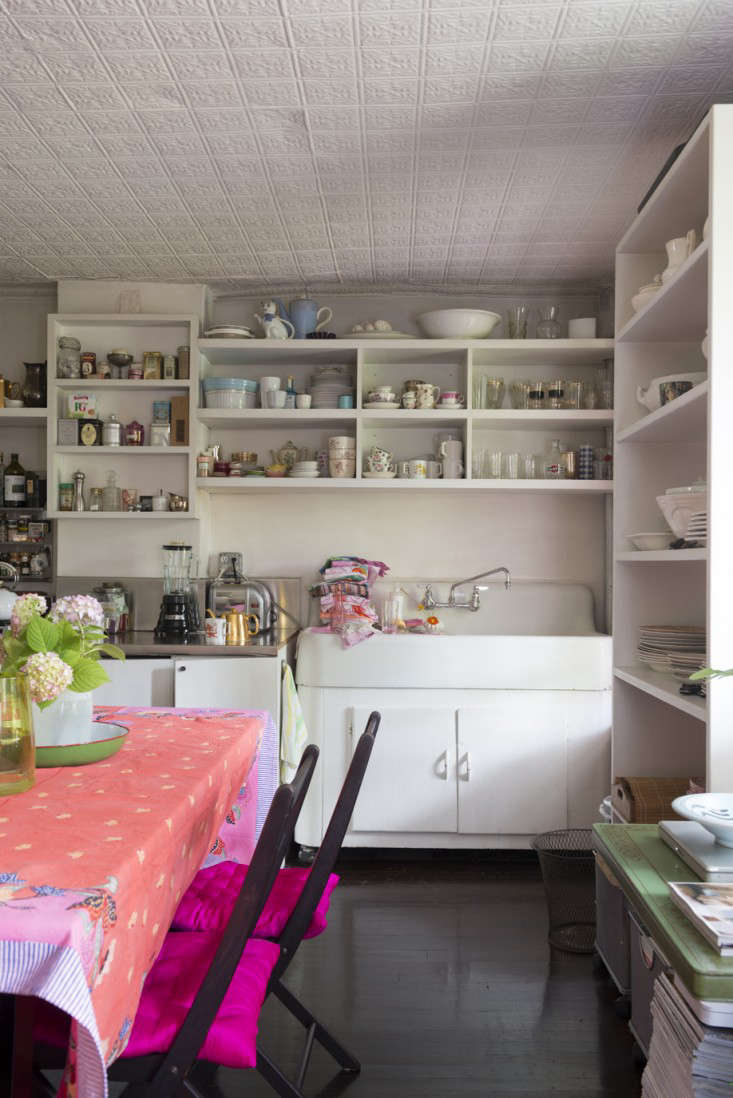 Above: The kitchen is the room that required the most work: Alayne replaced the old linoleum with a hardwood floor and the cabinets with custom-built open shelves. The enameled sink is original–it’s the detail that sold her on the apartment. 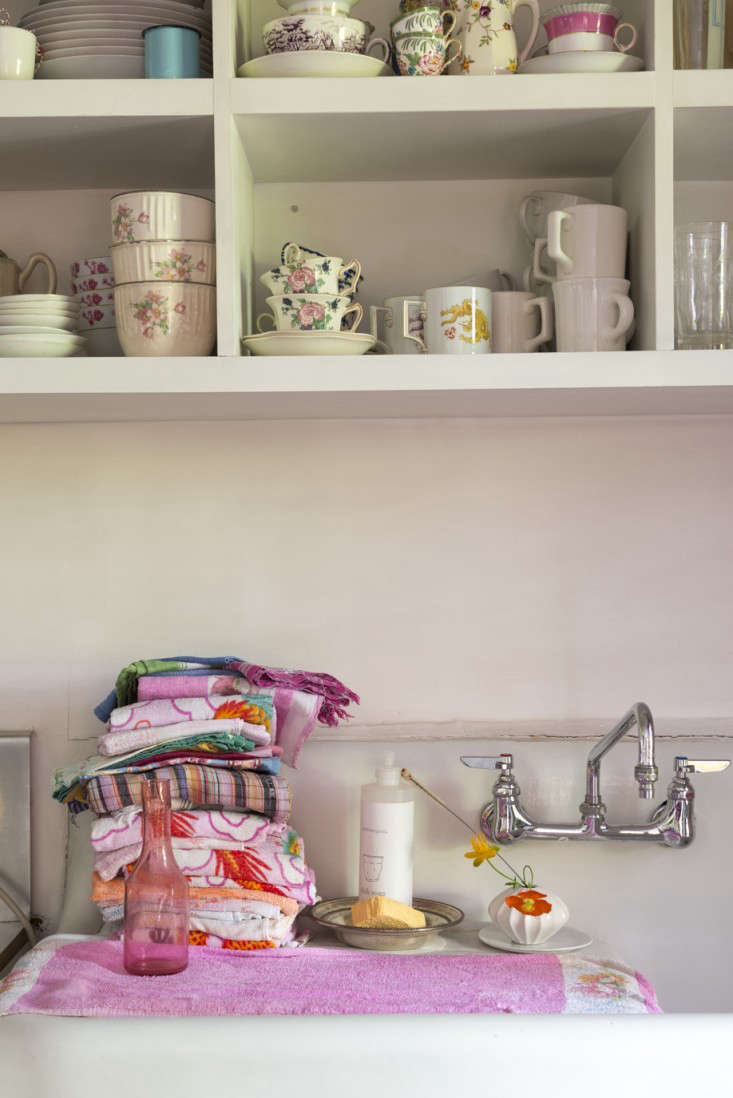 Above: A stack of Indian cotton and terry towels–a specialty at Layla–sits on the drying rack next to a pink glass bottle from Grdn in Brooklyn and a Jonathan Adler vase, a present from house guest. The faucet is original; for something like it, see Steal This Look: San Francisco Kitchen. 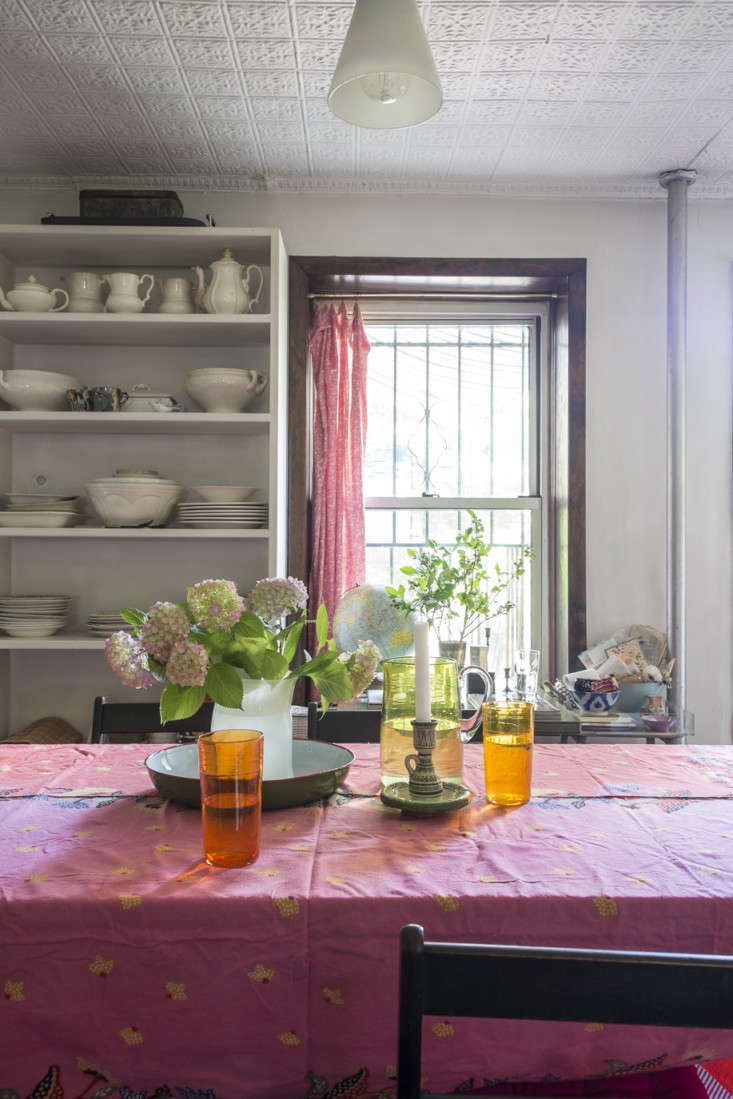 Above: A bright Lisa Corti Indian tablecloth from John Derian covers the table and unifies the room. The shelves hold Alayne’s collection of old ironstone china. 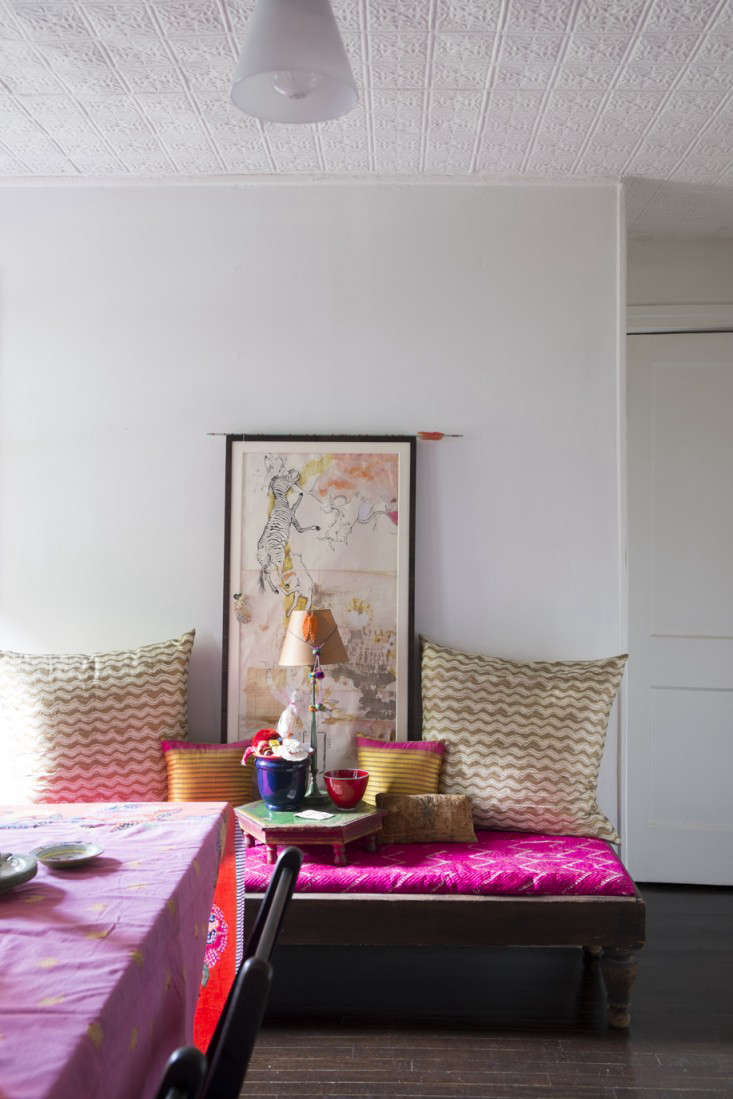 Above: An Indian settee in the back of the kitchen, near the apartment’s entrance, is covered in a hot pink embroidered silk wedding shawl made in Pakistan’s Swat Valley. The large pillows are from John Robshaw and the painting is by Jasiu Krajewski, a Brooklyn artist friend who references scrolls and uses seaweed paints. 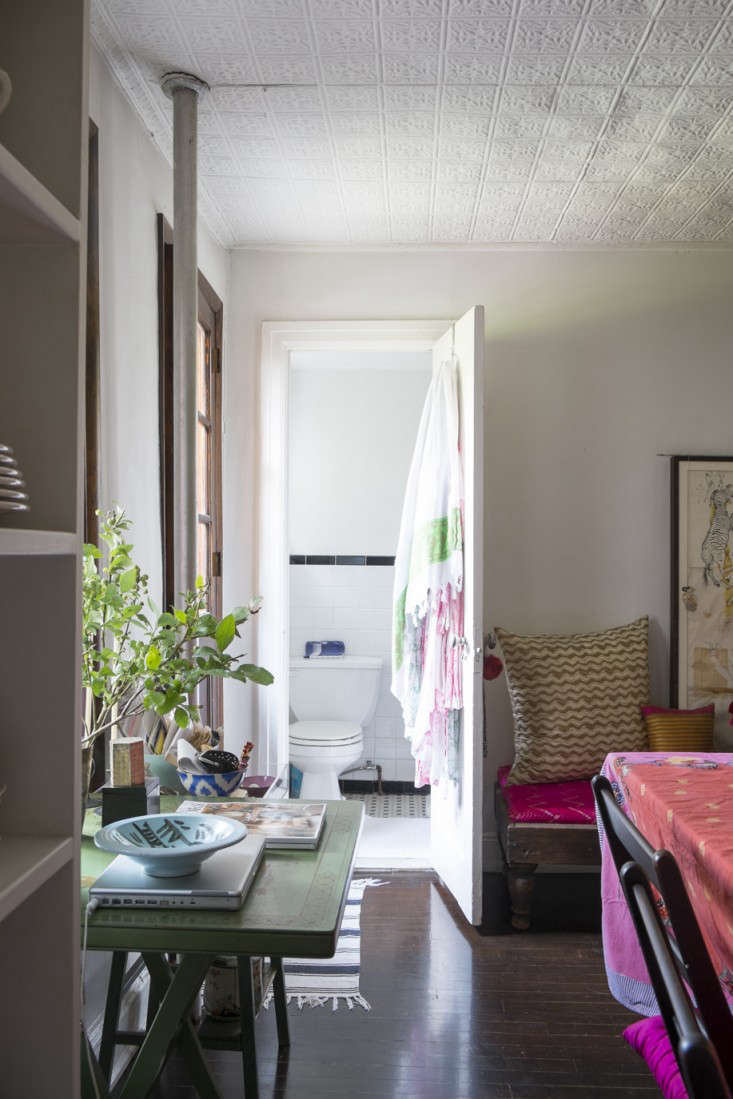 Above: The bathroom is tucked into a corner off the kitchen. Its door is hung with Indian hand-loomed cotton towels and robes from Layla. Next to the window, a green mahjong table, a $20 flea market purchase, serves as Alayne’s desk. 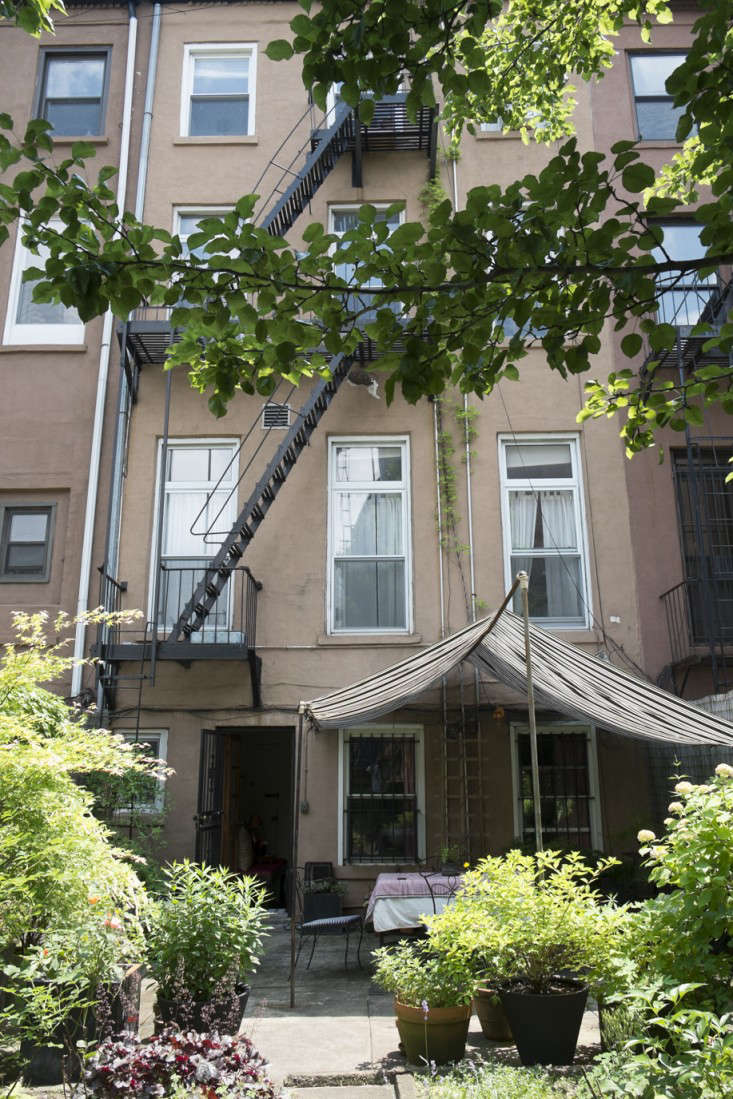 Above: A big selling point of the apartment is its backyard, a Carroll Gardens classic with cabana poles that’s nearly as big as the apartment itself. Alayne grows herbs and flowers in two plots and containers from Grdn. 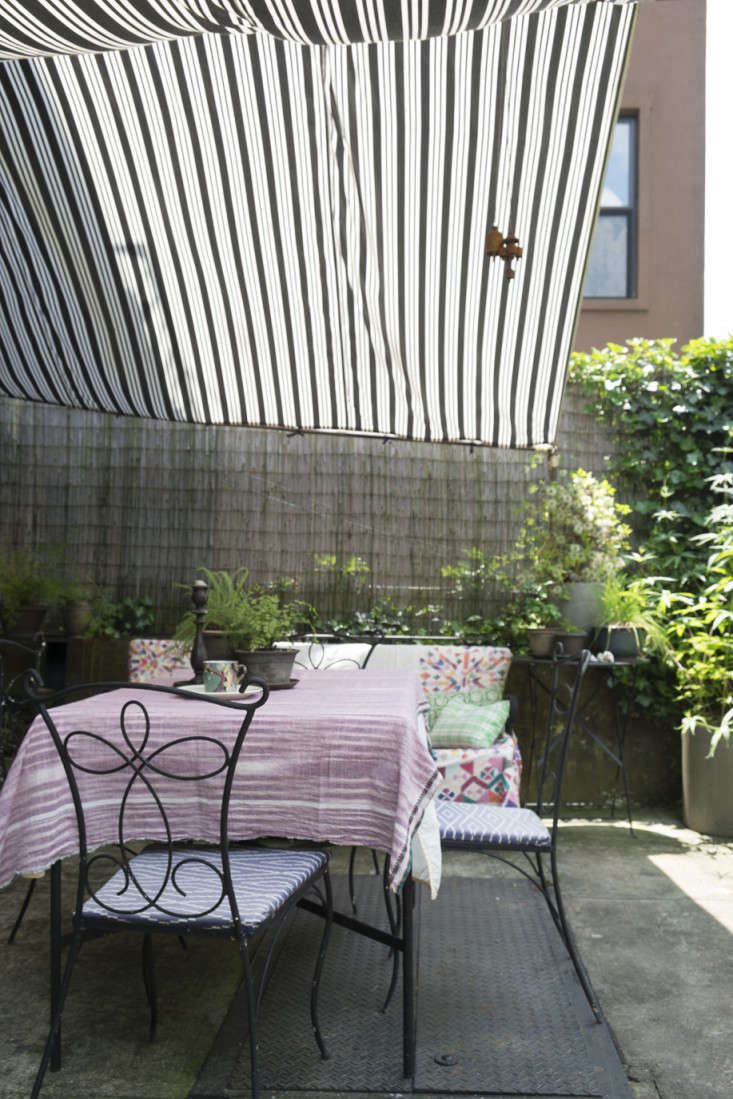 Above: Alayne initially tented her table by sewing saris together, but switched to more resilient Sunbrella fabric. The tablecloth is hand-loomed cotton from India. Alayne sews many of her outdoor pillows and makes seat cushions from John Robshaw block-printed tablecloths stockpiled from his sample sales.

Ready to live like Alayne? See our posts on Layla and the store’s Vintage Indian Enamelware. Layla has two locations in New York: on the mezzanine level of ABC Carpet & Home, at 888 Broadway at 19th Street in Manhattan, and, soon to reopen, the flagship store at 86 Hoyt Street in Boerum Hill, Brooklyn. Also soon to come: Layla‘s much-expanded online shop.

For more on small-scale apartment living, see Erin’s Survival Guide to Life (for Two) in a Tiny Studio and her 10 Tips for Living in 240 Square Feet.