London film director and Remodelista friend Gaby Dellal is a serial thrill-seeker; even when it comes to house renovations. Her unorthodox approach begins with intuition and carries on accordingly without a plan for the entirety of the project—definitely not a prescription for the faint-hearted.

And when the house in question is a large four-story London townhouse, untouched for sixty years, this can be either very frightening or, in the case of our friend, completely exhilarating. Dellal, whose recent work includes Abandoned (soon to be released in the UK), starring Jeremy Piven, and the ITV series Leaving, starring Helen McCrory (fun fact: McCrory is married to Homeland's Damian Lewis), finds inspiration in memories and spurns the concept of anything that is too perfect. "I love texture and color," she says. "I decide on something and then find a way of making it work."

Photography by Simon Bevan for Remodelista. 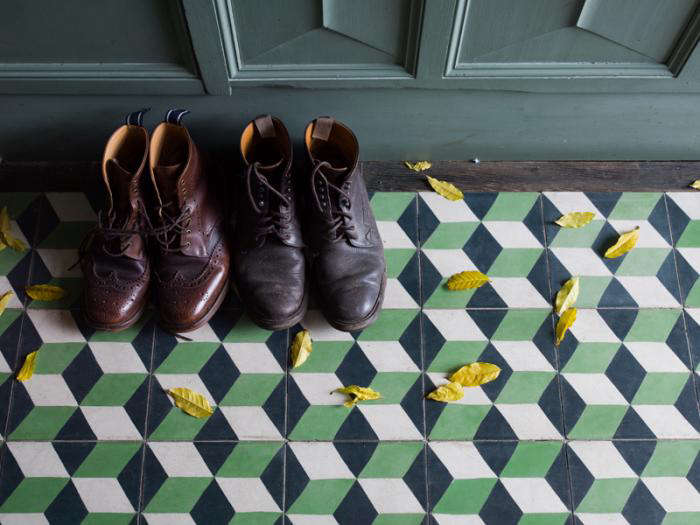 Above: "I spotted these graphic encaustic cement tiles from Emery et Cie and knew they were perfect for the front hall," Dellal says. "When we laid the tiles, though, they were a few inches short. I found a piece of wood in my scrap collection in the garden and we added it as trim." 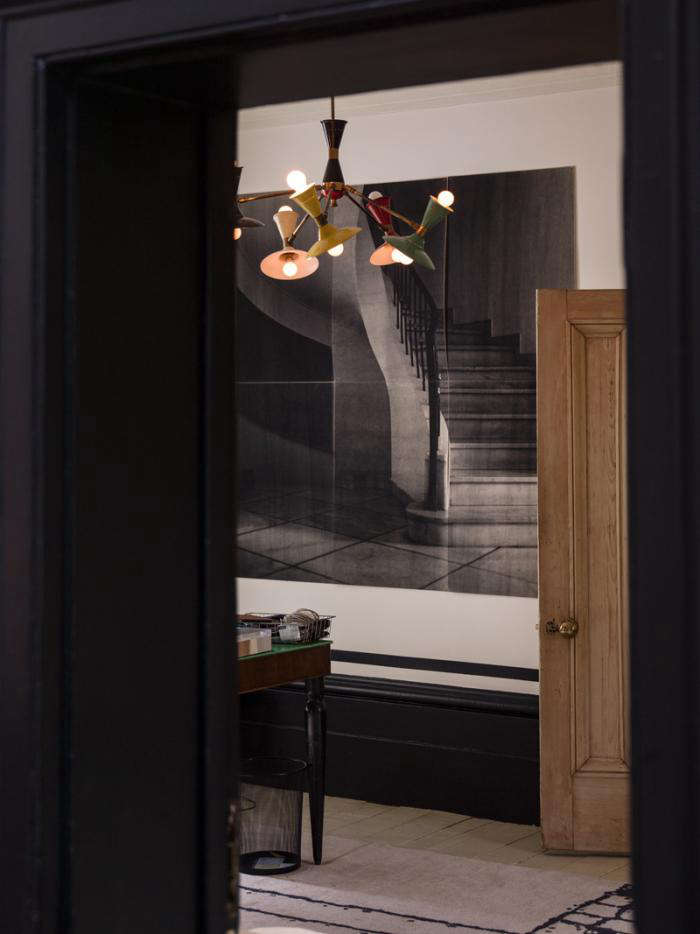 Above: "I am a very visual person, and it's very important to me to get the set right on all my films," Delall says. "That's why the production designers love me—I'm always with them." The large-scale black-and-white photograph is made up of six felt panels by Brooklyn artist Lorna Simpson. 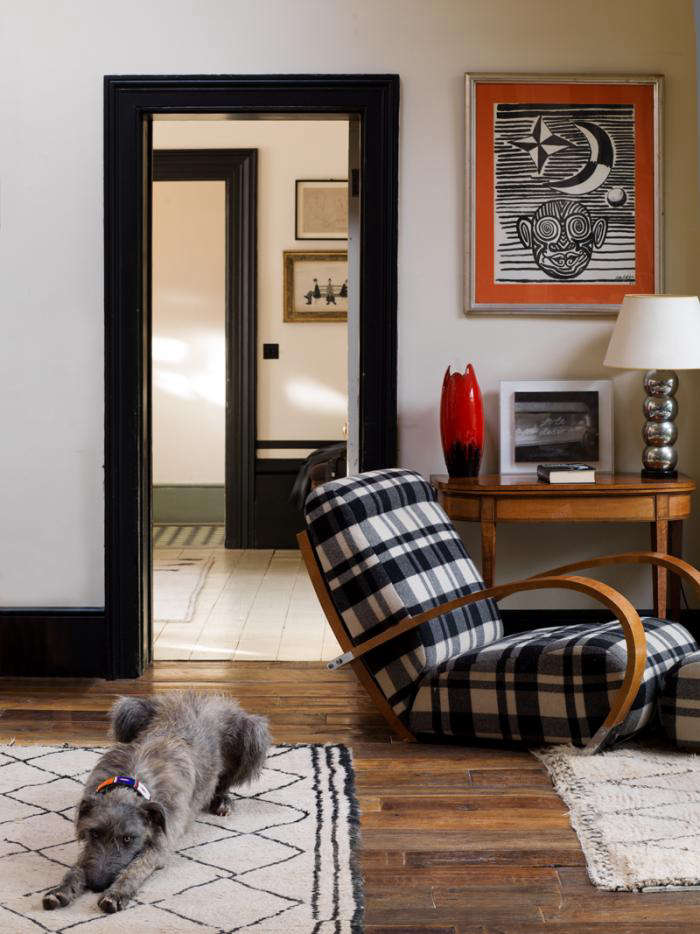 Above: "We purchased the Ancien flooring before the work on the renovation even started; we left it to dry for a year," Dellal says. "I find the uneven surface appealing." The Alexander Calder print on the wall, which Dellal grew up with, was a present from her father. 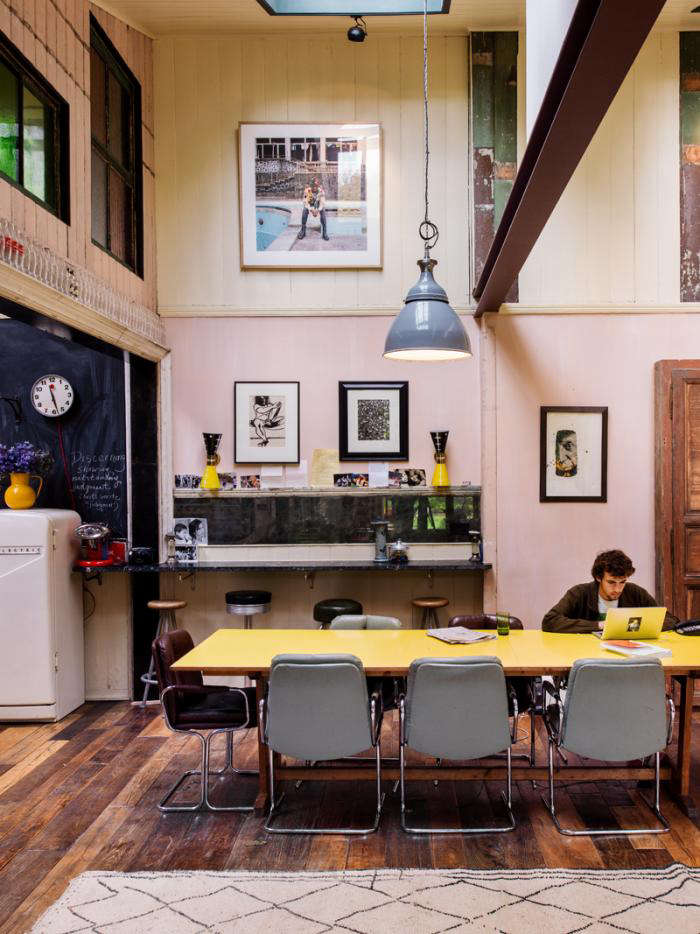 Above: When she moved in, Dellal's kitchen had a pink wall. Rather than paint over it, she proceeded to match the pink and use it around the room. She liked the texture of some of the existing panels so much that she left them unpainted. 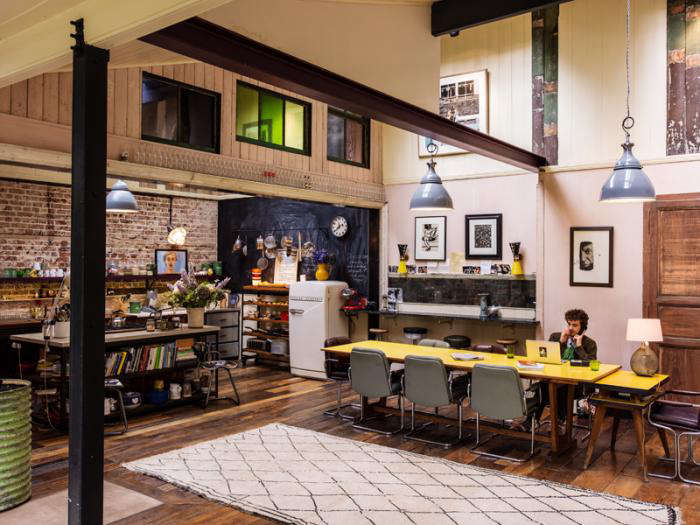 Above: "I found the yellow midcentury yellow table at 52 Meters and moved it into the pink room," Dellal says. "I wasn't concerned about their matching, I knew I could make it work." She already owned the green and yellow glass in the sidelight and realized they would be perfect in her new kitchen. The kitchen island was designed also to be a bookshelf (a set of zinc-faced drawers add contrast to the wood cabinets). "I have never had a fitted kitchen in my life," she says. 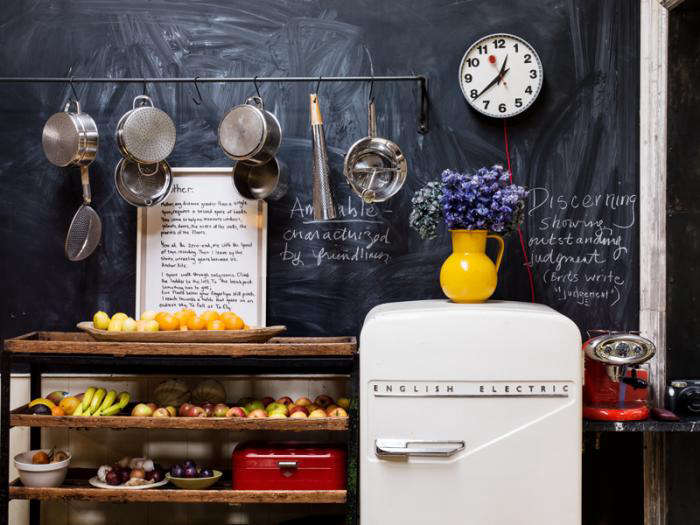 Above: "I like to find things and make them work.," Dellal says. When her three boys were younger, the baker's trays held their sports equipment. She commissioned metal fabricator John Aspery to make the pot rail in the spirit of a stately home she visited in Cornwall. Dellal's cinematographer partner, David Johnson, bought the English Electric refrigerator when he moved to London; it was his first major appliance purchase. 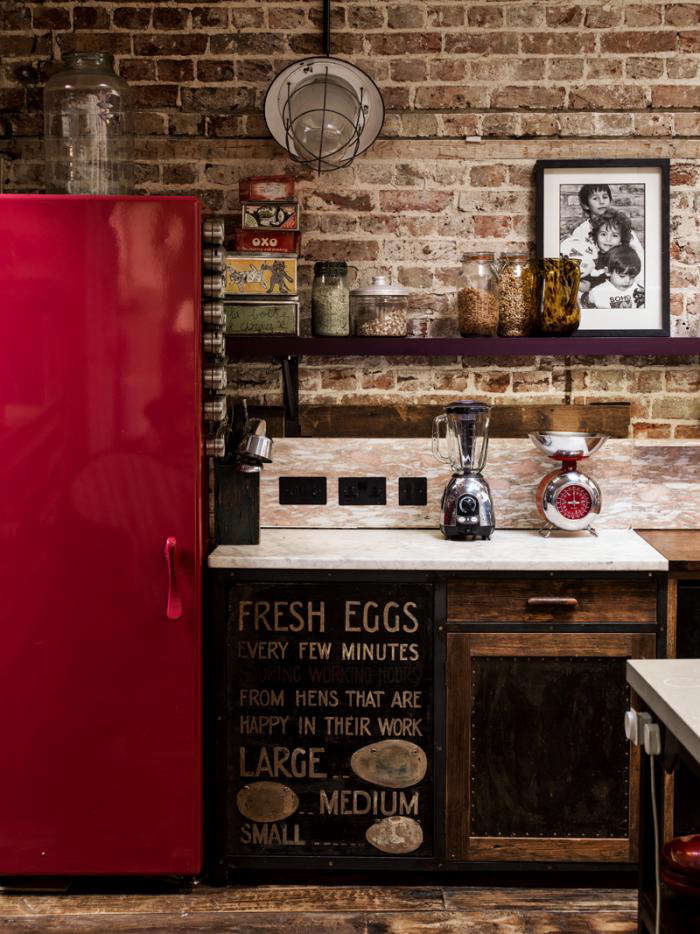 Above: Dellal purchased the folk art "Fresh Eggs" panels many years ago when she lived in LA. Sitting on an airplane and looking out the window, she was inspired by the metal rivets of the plane's wing and worked with metal fabricator John Aspery to create the same effect on her kitchen cabinets. 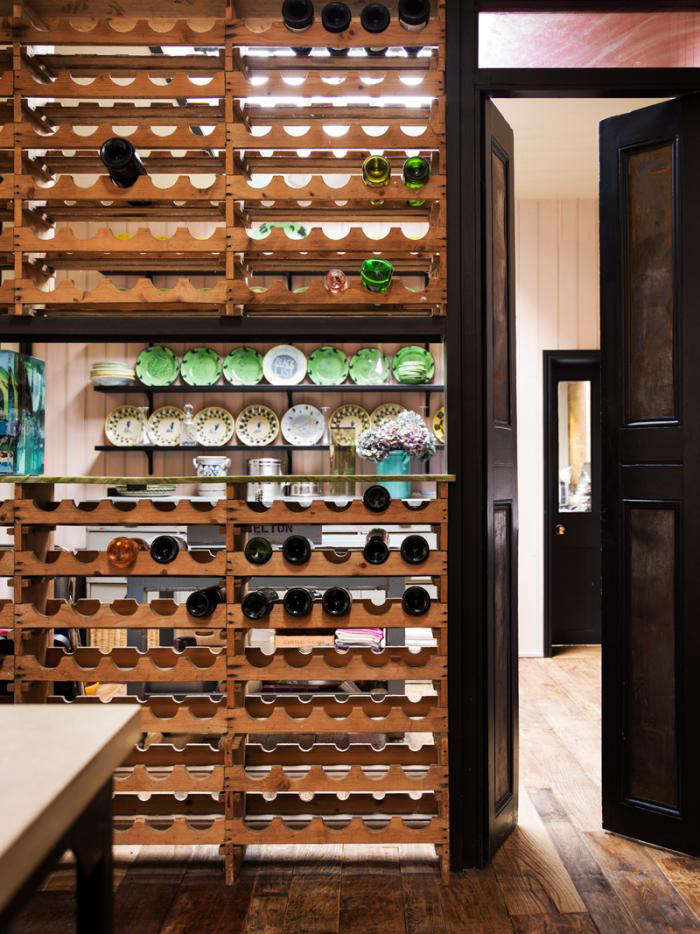 Above: Dellal opened up a wall and installed a pine wine rack as a room divider (she commissioned John Aspery to create a metal frame with a marble shelf as a bar, providing transparency between the kitchen and the pantry). "The original idea was to fill the wine rack with empty green bottles and let the light flow through," Dellal says. 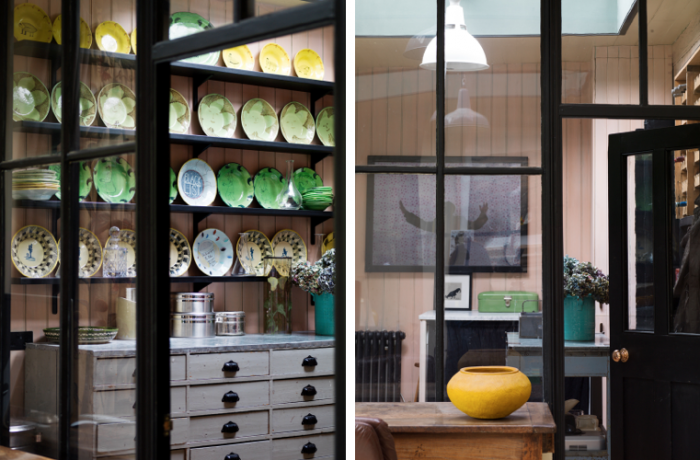 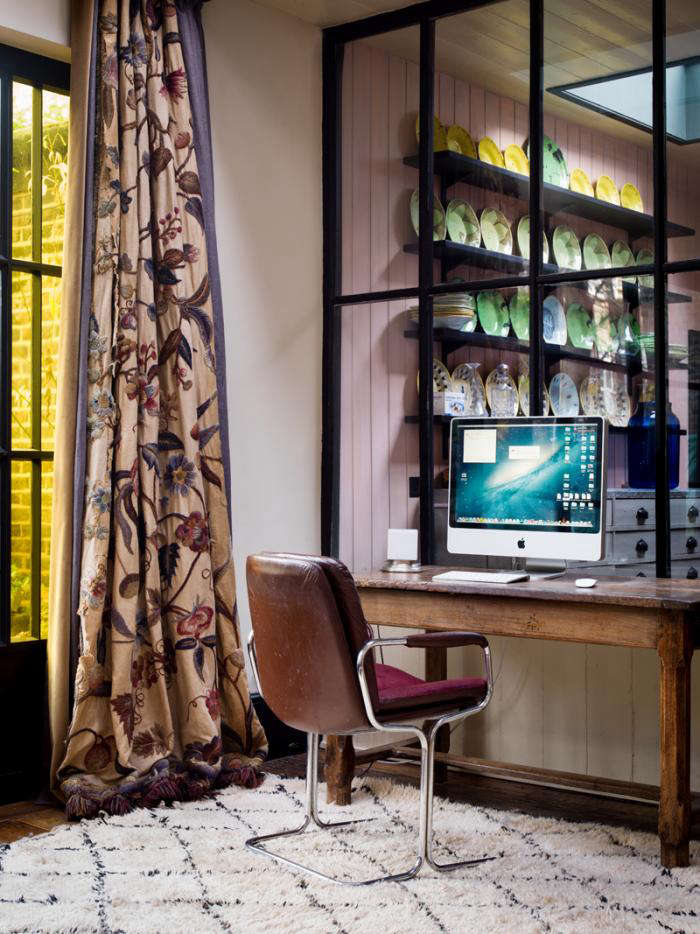 Above: Dellal opened the back wall out to the garden and inserted metal doors with yellow glass panes. She transformed a piece crewel work (a present from her sister, Geminola dress store owner Lorraine Kirke) into a curtain by adding brocade at the bottom and lining the crewel with pink and beige sacking cloth (we think the sisters share an eclectic design DNA; see A Designer Haunt in NY and tell us if you think the same). 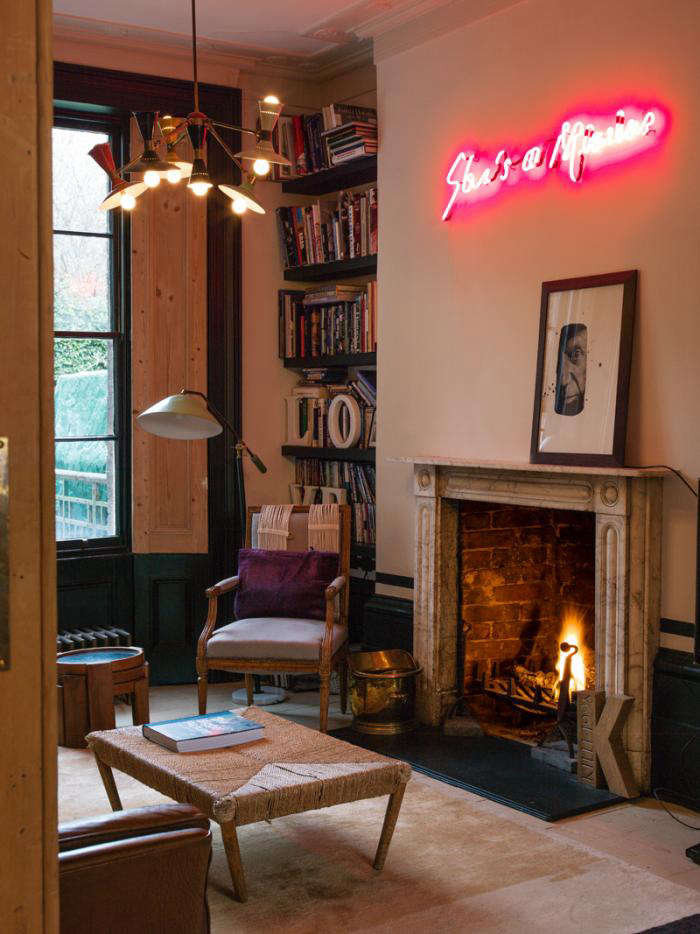 Above: The neon sign is a birthday present from her three sons. "She's a Mimimins (their nickname for their mother)," and hangs above a portrait of Picasso. 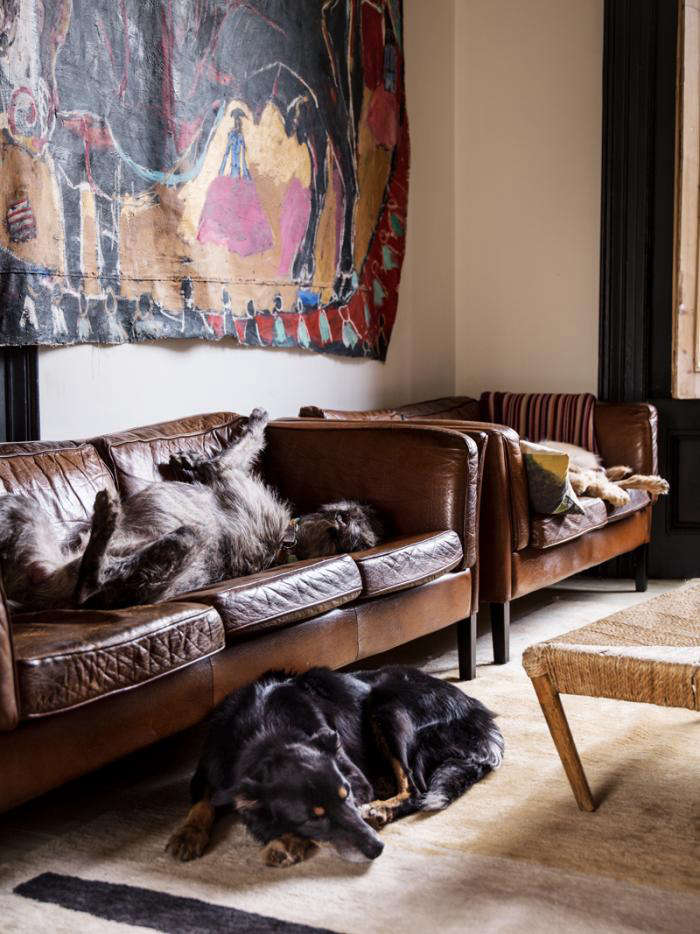 Above: Dellal's three dogs snooze in front of a painting by her artist friend Damian Elwes. 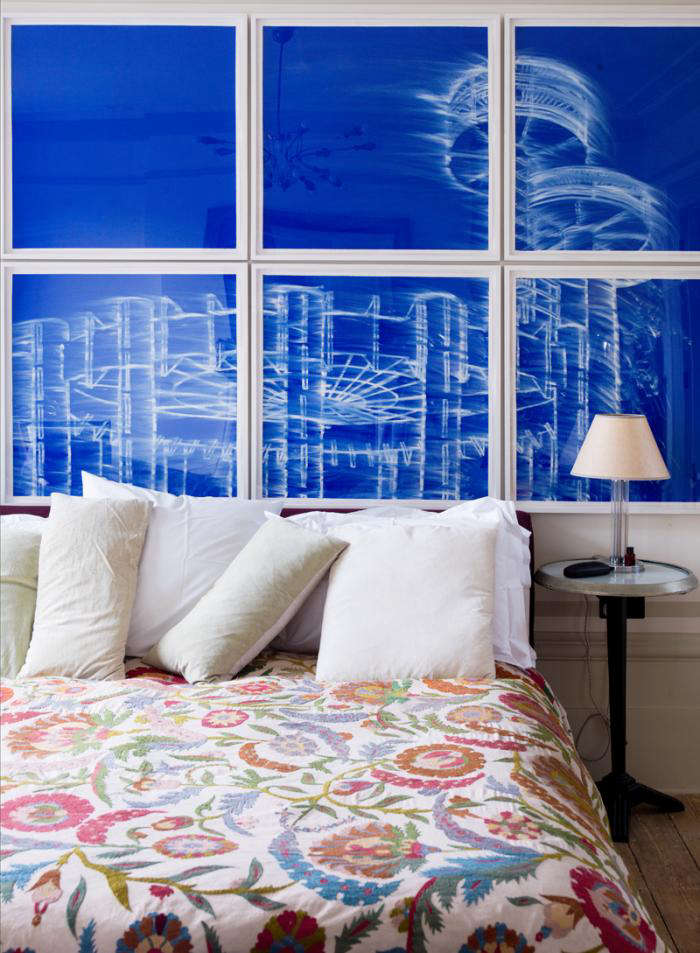 Above: A series of drawings by artist Gary Simmons sets the tone in Dellal's bedroom. 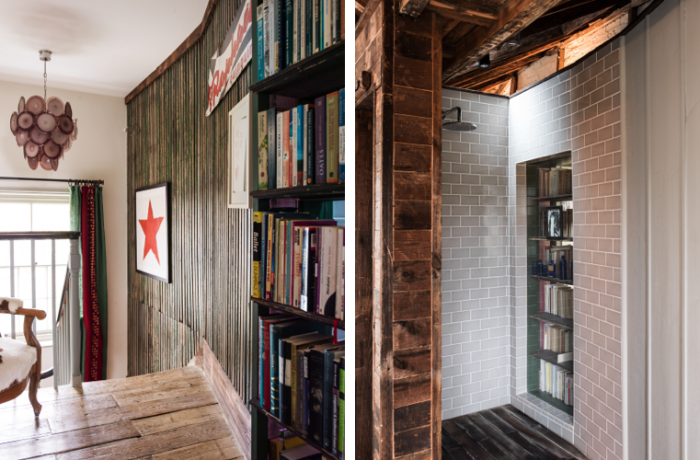 Above L: A garage roller shutter is used to panel the hallway leading to one of her son's rooms. Above R: A shower is located on the other side of the bookcase, which is comprised of old bread boards. "I'm a bit of an exhibitionist, and I thought it would be fun to pull out a book and see someone in the shower," Dellal says. "I also like to see the reverse side of books," she adds. The roller shutter and bread boards were purchased from Architectural Forum. 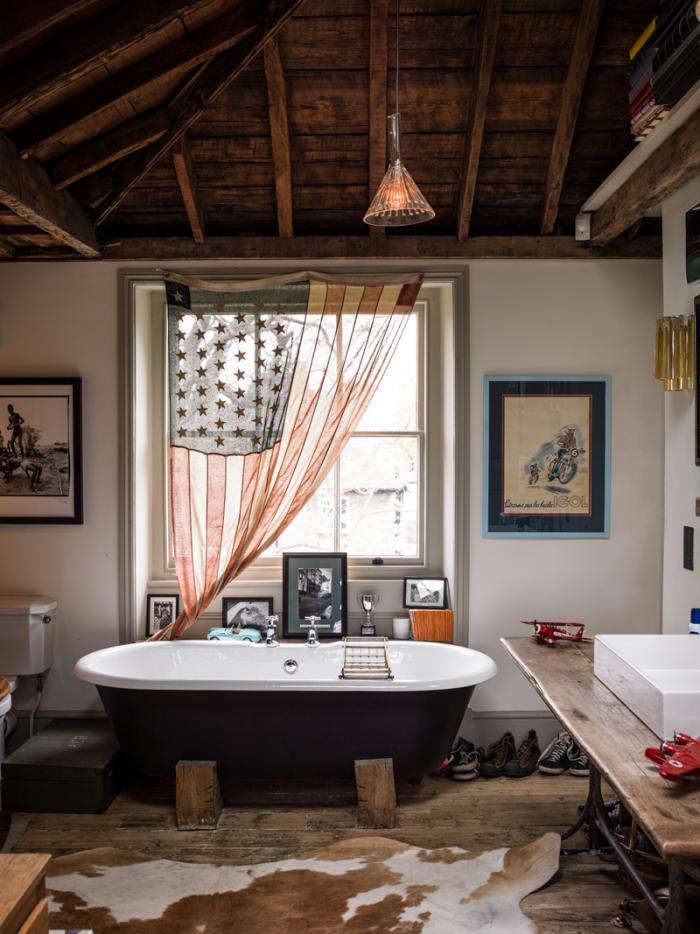 Above: "The Americana memories I have are from visiting my best friend (the artist Tarka Kings) in Wyoming when we were young," Dellal says. "They have always stayed with me." Removing a false ceiling revealed an exposed wood ceiling, which Dellal preserved by insulating the room from the other side of the beams. 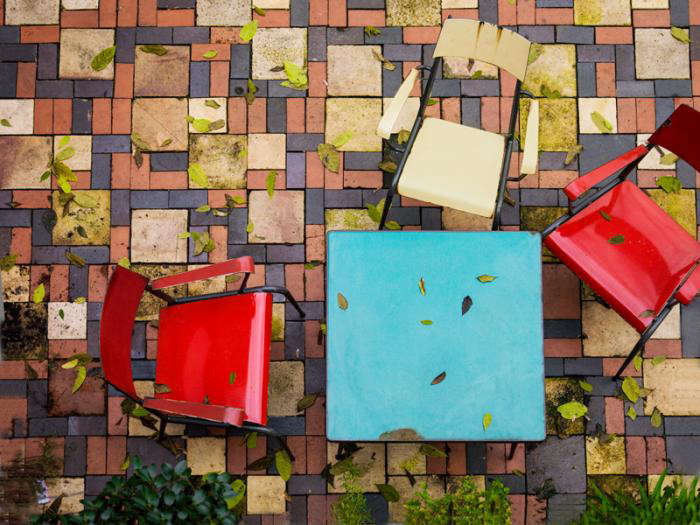 Above: Dellal created the tile pattern on her terrace based on a Frank Lloyd Wright tapestry she saw several years ago at a Guggenheim retrospective. She worked with architect Charles Tashima to create a pattern that would not repeat perfectly. "I wanted it to look like it been there forever," Dellal says. The midcentury outdoor furniture is from Philip Thomas.

Very few people can resist the allure of an exposed ceiling. Imagine what it would be like to have your own with 996 images of Exposed Ceilings in our Gallery of rooms and spaces.