My neighbor Bill Stock has an amazing garden–30-year-old roses and towering hollyhocks grown from seed he brought from Monet’s garden after a visit to Giverny. But the other night at a dinner party Bill leaned over his plate of grilled halibut, locked eyes, and confessed a terrible secret: His indoor citrus trees keep dying. “It’s a mystery,” he said. “Can you solve it?” Here are five strategies to help indoor citrus trees thrive:

From Bill’s description it was clear something was very, very wrong. This is Northern California, after all, where citrus trees grow like weeds. So the next morning I walked over to Bill’s house to gather clues. There, I was greeted by two desperate looking potted mandarin orange trees, both two-feet tall and neither looking like it was ever going to see three. There was no denying both looked sick: their leaves were mottled with yellow spots and curled under like a witch’s fingernails.

At first glance, Bill seemed to be doing everything right–his potted dwarf mandarin orange trees live in an actual solarium, a light-filled sunroom with three walls of windows. He waters them every three days and fertilizes them regularly.

I poked at one sickly specimen. A brittle leaf fell and fluttered to the ground at my feet. “Hold on, little guy,” I urged it. “Help is coming.”

There was only one thing to do: consult a citrus-tree specialist. 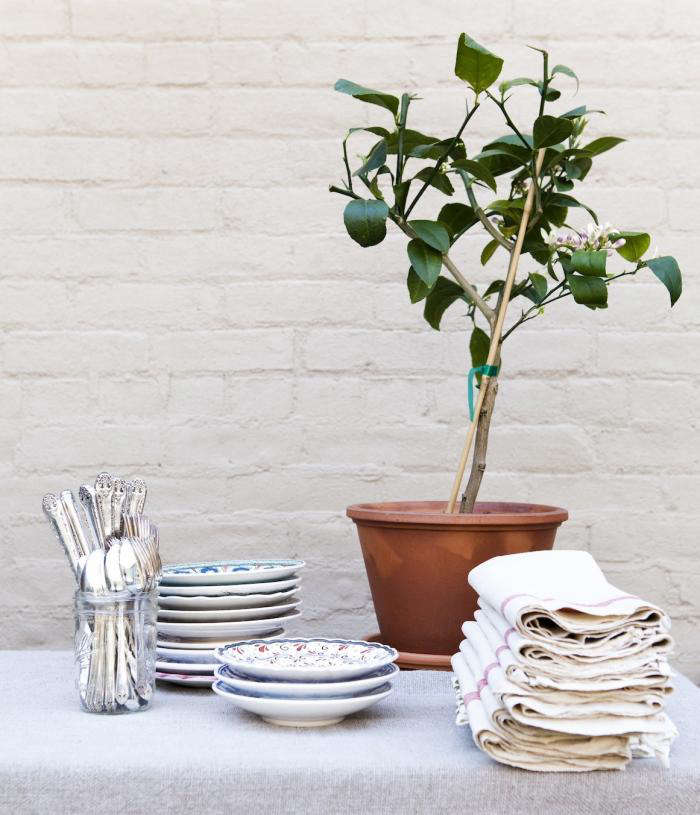 Above: A potted Meyer lemon tree. Photograph by Nicole Franzen for Gardenista.

I reached Mario Vega, a nursery specialist at the Conservatory of Flowers in San Francisco’s Golden Gate Park, while he was driving.

“Hang on, I’m pulling over onto the shoulder,” Mr. Vega said.

I detailed the symptoms of Bill Stock’s ailing trees. “All he wants is for his trees to look as good as the ones you grow indoors at the Conservatory,” I concluded.

“Actually,” Mr. Vega said, clearing his throat, “we don’t grow them indoors. We grow them outdoors and then bring them in when they’re show-worthy.”

The truth about indoor citrus trees, it turns out, is they really would rather be outdoors. There are several reasons why, Mr. Vega explained. 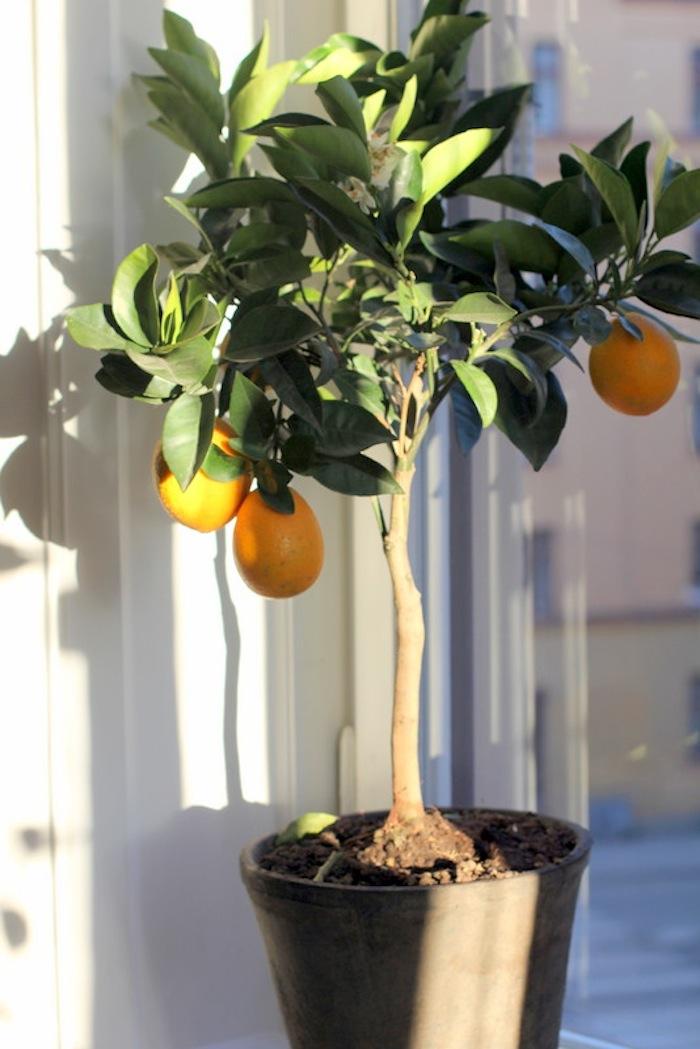 Above: Photograph via Seventeen Doors.

“Indoors, there is a lack of humidity,” said Mr. Vega. “Most indoor environments have like 10 percent humidity, whereas most plants including citrus trees that thrive in the outdoors need closer to 50 percent humidity and above.”

“So Bill needs to increase the humidity in his solarium?” I asked. “Like, with a humidifier?”

But the answer wasn’t that easy. “There are lots of ways to increase indoor humidity, but the question is, would you want to?” Mr. Vega said. “You could bring on a whole host of things you don’t want to encourage in an indoor environment: mold, mildew, paint peeling,” he said.

One way to increase the humidity level without damaging an indoor environment is with a humidity tray. 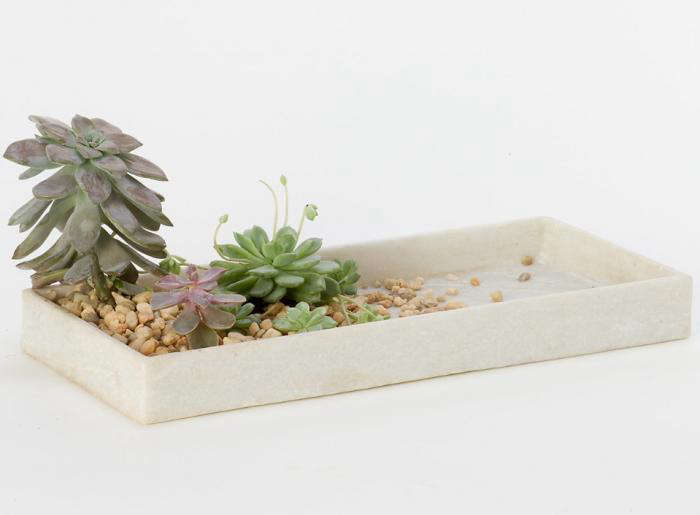 Above: A Polished Marble Humidity Tray is $128 from Terrain.

“You know those little saucers you put under potted plants to catch the runoff water?” Mr. Vega said. “Fill a little tray with pebbles and leave the runoff water in there. As the water slowly evaporates, it will raise the humidity enough to improve conditions for the plant.”

An even better solution, though, would be for Bill to move his trees outdoors in warm weather because the air indoors gets stale. To make it easier to move large potted plants, put them on wheels with one of our favorite Rolling Plant Stands.

“Buildings tend to be airtight, particularly newer buildings. In them, the air becomes quite stagnant,” said Mr. Vega. “You have plenty of air movement outdoors, which is good for plants. So move your citrus trees outdoors when you can.”

Best careful, though, not to overdo it on the first day of spring. “A plant that has been indoors all winter is like a fair-skinned person. Too much sun exposure too fast and it will get sunburn,” said Mr. Vega. “Move it to sunnier locations gradually and for shorter periods at first, as it puts out new leaves.”

If you have no outdoor space, open doors or at least a window in warm weather to improve air circulation for citrus trees. 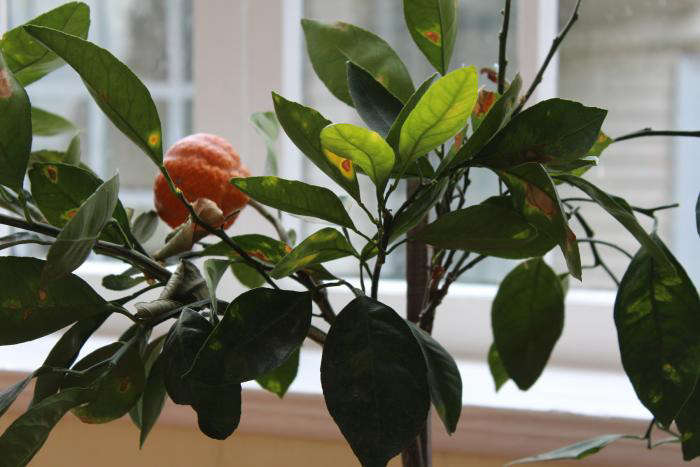 Secret No. 3: Plenty of Water.

“The leaves are curling under to try to conserve moisture, to try to recapture moisture they’ve lost,” said Mr. Vega. ” A dry root causes a plant to be stressed.”

If plants get too dry, salts will accumulate in the soil (when the soil is wet, the salts are soluble and won’t harm plants). So keep plants moist, but don’t waterlog them or the root will rot. Allow the surface of the soil get dry, but water the plant while there is still some moisture around the root. 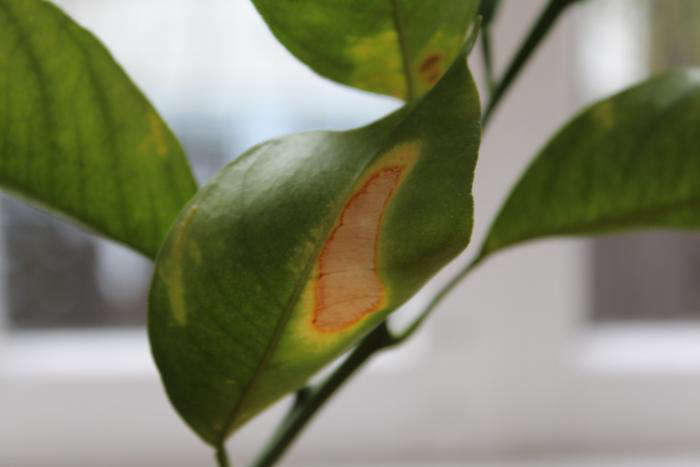 “Those yellow spots are most likely the result of chlorosis, a lack of chlorophyll,” said Mr. Vega. “That plant is telling you it’s very stressed and not getting the nutrients it needs.

Feed citrus trees with a good balanced 18-18-18 fertilizer, he said. You can use that pretty much throughout the year, or else use compost,” he said. 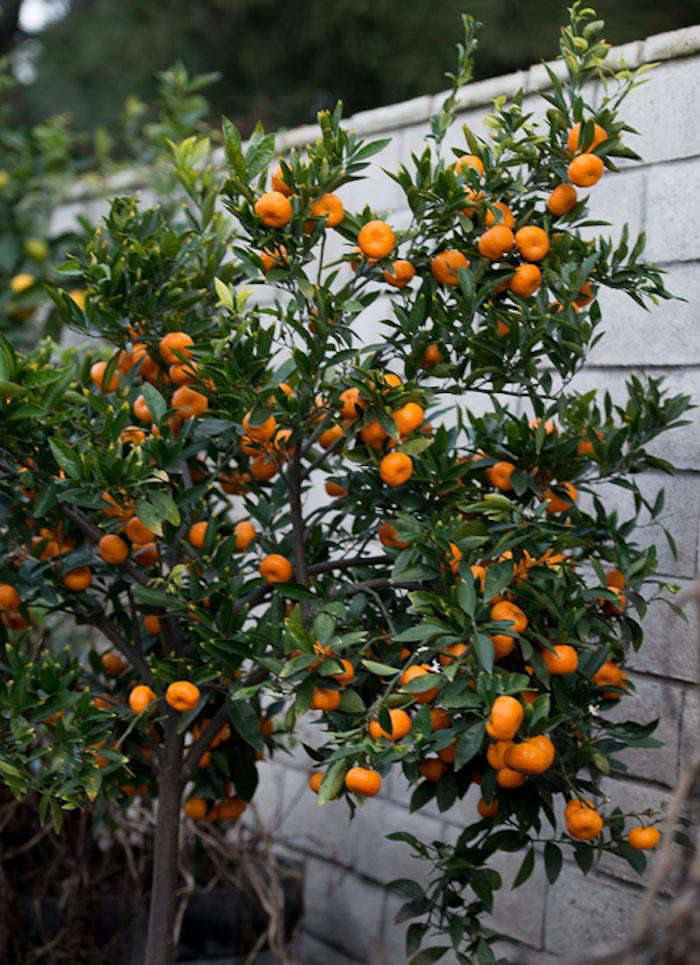 Above: A kishu mandarin tree thrives outdoors. Photograph via White on Rice.

Citrus trees require a minimum of eight hours a day of sunlight to thrive, and they’d really prefer 12 hours, said Mr. Vega. In Bill’s solarium, the light is probably adequate (with western, northern, and southern exposures). But don’t think you can get away with putting citrus trees in a location with filtered or limited light.

“They need really strong sunlight to be induced to bloom and to have the strength to produce fruit,” Mr. Vega said. 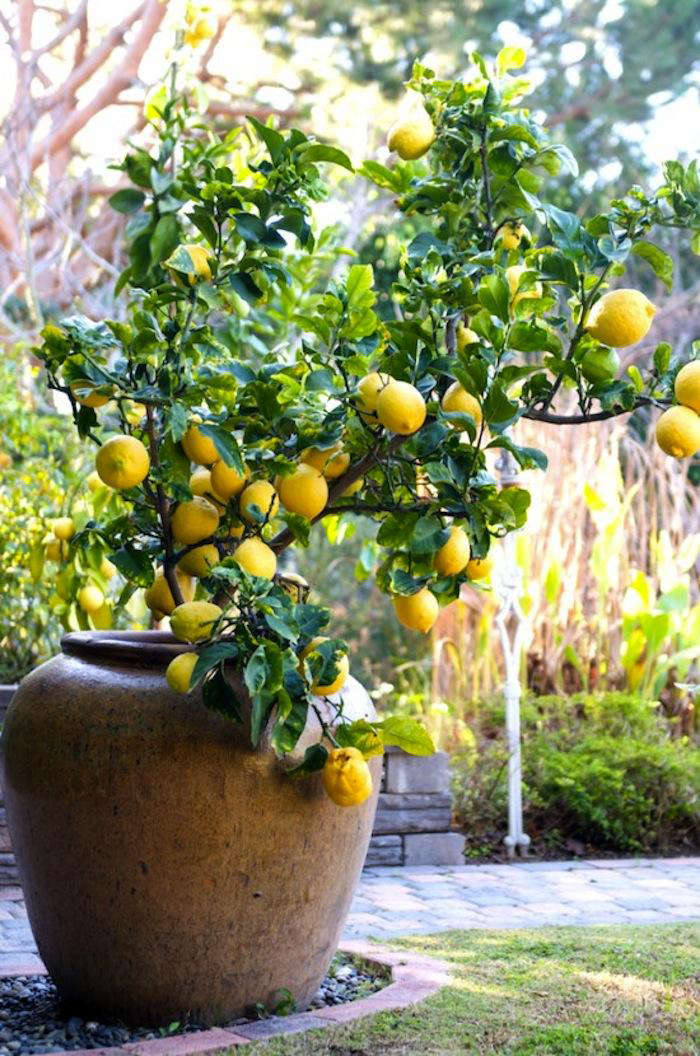 Above: A Eureka lemon tree likes a pot fine, so long as it’s outdoors. Photograph via White on Rice.

It’s not hopeless, of course, to try to grow citrus indoors. But choose a dwarf variety that won’t be prone to outgrowing its pot and be prepared to baby your tree. Give it the conditions it needs to grow and don’t try to make it bend to your will. As for all those photos you see of beautiful, thriving indoor citrus trees? I suspect they may have been grown outdoors and brought inside, briefly, when they were show-worthy.