This week, Jayne and Joan Michaels of 2Michaels Design share their go-to source for midcentury furniture and art: Larry Weinberg of Weinberg Modern. As an added bonus; they pick their five favorite pieces from his collection

In the early 1990s, Weinberg was a graduate student in history when a chance encounter with Mark Isaacson, an early champion of 20th century decorative arts and owner of Gallery Fifty 50, changed his life. Weinberg went on to become an influential pioneer in helping to uncover and rediscover twentieth century design from the 1930s to the 1970s. “I had an emotional and visceral response to these objects in space,” he says. “Abstraction was on my mind; it was what I was seeing. It was a bit of a free for all back then; a Noguchi table could be had for $10.”

Weinberg works with private clients and designers to find the right pieces (he was a source for the furniture in last weekend’s A Midcentury Dream on the Upper West Side, designed by 2Michaels, who are members of the Remodelista Architect/Designer Directory. 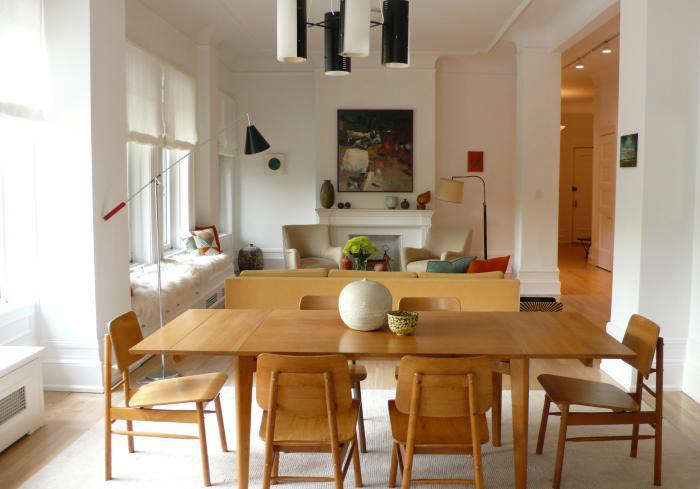 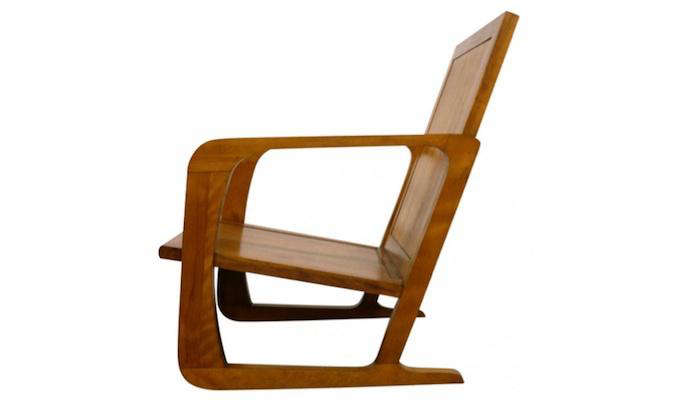 Above: The Streamlined Mueller Armchair from the 1940s was designed to ship flat in four pieces. “This chair has great lines, it’s chic, low slung, and it would add a sculptural quality to any room,” says Joan Michaels of 2Michaels Design. 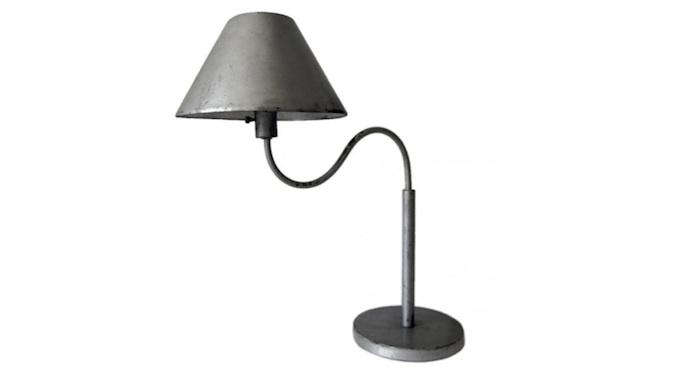 Above: This Early Josef Frank Lamp is from his Austrian period and was produced for his firm Haus & Garten in 1928. “We like the playfulness of the double-curve element in this lamp, says Michaels. “It was designed in the 1920s and it still looks fresh.” 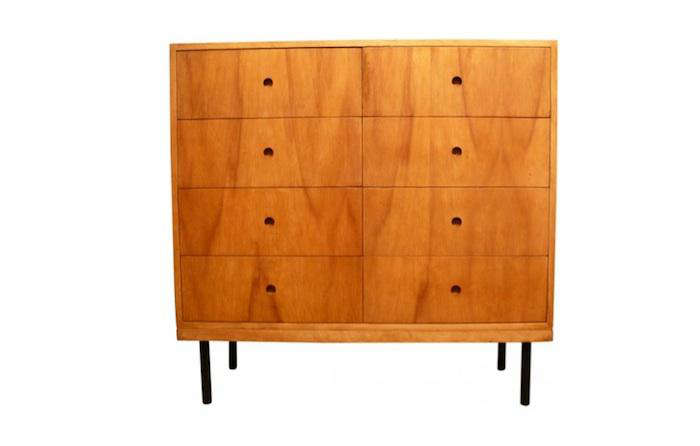 Above: This Custom Unit Chest was produced in the early 1940s by Eric R.E. Schuster of the Art and Trade Shop of NYC is stylistically related to the Eames/Saarinen case pieces for the MoMA Organic Design show of 1941. “The bold grained book-matched birch veneer has a rich, buttery patina and gives this piece its beauty,” says Michaels. “Its simple shape with elegant details such as the recessed round pulls and the straight metal legs make it truly special.” 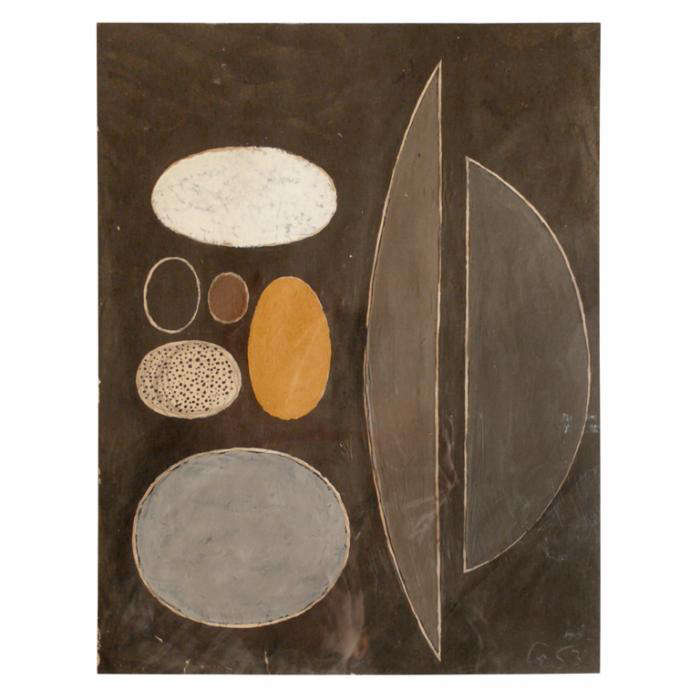 Above: This Abstract Study was painted by Boston-area artist Richard Filipowski right after his two-year stint teaching a Bauhaus fundamentals course at the Harvard School of Design. He was the only American to teach alongside Moholy-Nagy and Gropius and remained a link to the Bauhaus until his retirement form teaching in 1986. “Richard Filipowski’s work is a bit under the radar,” says Michaels. “His works is a good investment for a collector of midcentury art.” 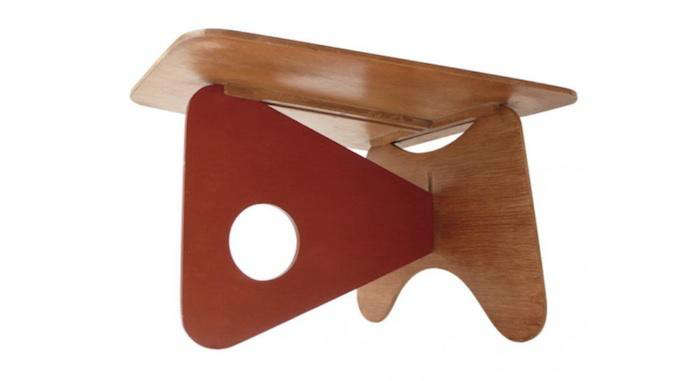 Above: This cut plywood Butterfly Table designed by Dan Cooper and produced by Drexel Furniture in the early 1940s was intended for a mobile wartime population and was easily disassembled and transported. Because of its disposability, very few have survived. Weinberg has only come across two in the last 20 years. “The midcentury organic design of this table is extremely rare and wonderful and I haven’t seen anything quite like it,” says Michaels. “It should be in a museum.” 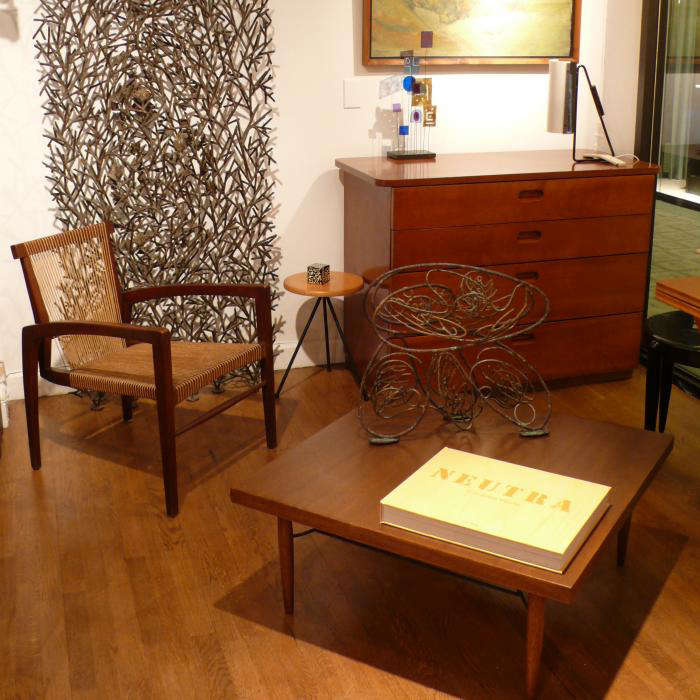 Above: A leading authority in the field, Weinberg can often be found writing in his gallery, Weinberg Modern which is in the New York Design Center. An 8-foot tall metal sculpture, “Queen” by Richard Filipowski sits behind a String Armchair by Irving Sabo for J.G. Furniture of Brooklyn. The Chest of Drawers was designed by Marcel Breuer for a house in Duxbury, MA, while the square cocktail table is a rare Luther Conover design.

N.B. Interested in Midcentury furniture? See 824 images of Midcentury Furniture in our Gallery of rooms and spaces.