We’ve been intrigued by the artful simplicity of the Drift San Jose in San Jose del Cabo, Mexico, for a while now–see The Handmade Baja Hotel. Maggie Davis and Vanessa Smith’s photographs of the resort for Tiny Atlas Quarterly’s Water issue are a reminder: Look no further for the perfect affordable escape.

Tiny Atlas is an online and print publication produced by a Bay Area collaborative of photographers, writers, and artists: “It’s where we share all the places we love to travel ourselves, as well as how we see our own backyards.” #LOVEmytinyatlas, a show of its Instagram community’s work, is currently on view at Alite Designs Outpost in the Mission in San Francisco. 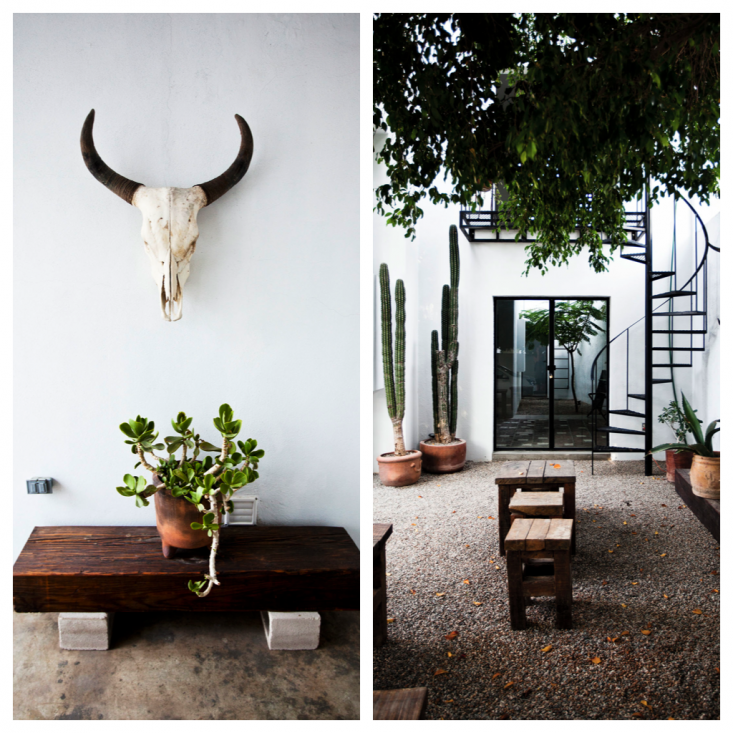 Above L and R: The Drift’s American owner Stu Waddell and his local crew designed and built much of the furniture on-site using concrete and leftover wood. He describes the look as “a combination Baja ranch and industrial loft.” Photographs by Maggie Davis and Vanessa Smith via @TinyAtlasQuarterly. 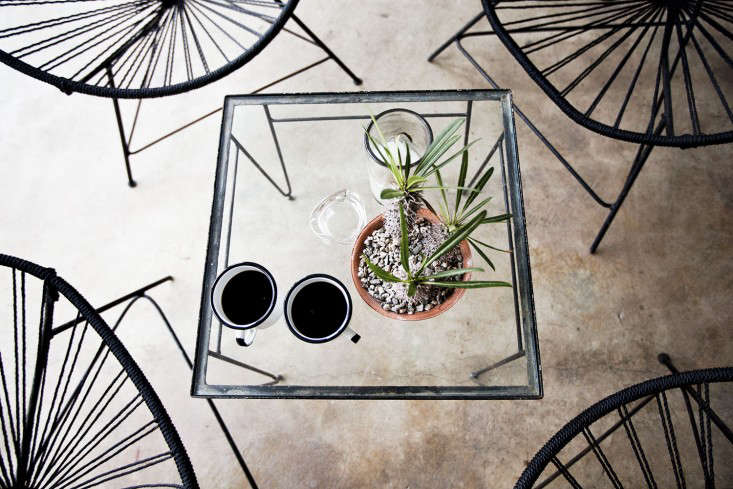 Above: Even the resort’s Acapulco chairs are partly homemade: “The steel frames were strung with black twine by our gardener, Benito, who grew up near Acapulco, where his father taught him how to do it.” The coffee table is vintage and came from one of Stu’s best sources, the Lagunilla Sunday flea market in Mexico City.

SF photographer Maggie Davis, who was recently at the Drift with her girlfriend, calls it “the anti-hotel: somewhere that embraces communal living and building friendships with fellow travelers.” Photograph via @TinyAtlasQuarterly. 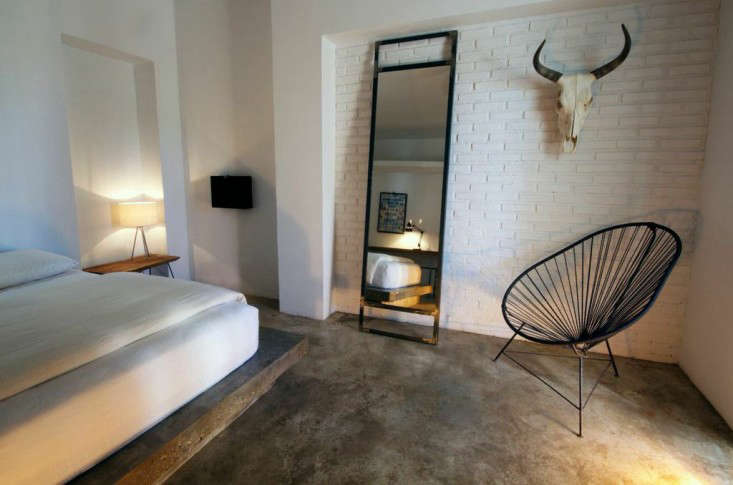 Above: There are eight rooms, no two alike, but each has a polished concrete floor (“a cool surface that looks warm thanks to its natural coloring,” notes Stu), a concrete bed platform that appears to float, and an Acapulco chair. The sheets are 100 percent raw cotton from Bed of Vancouver. Photograph via @bajacowboy. 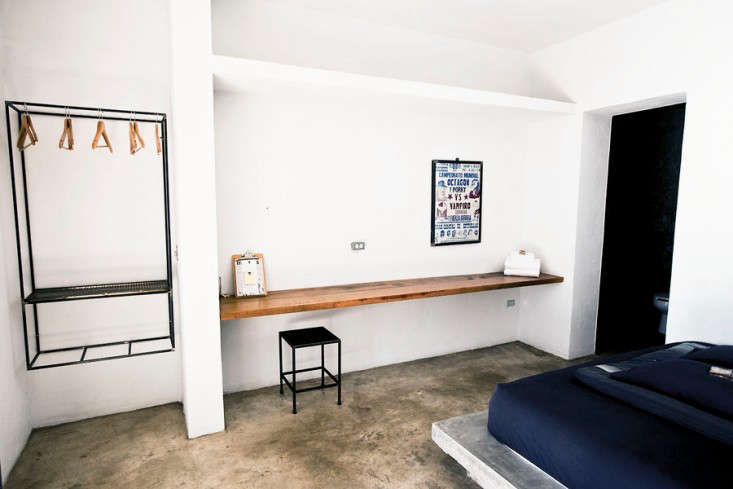 Above: A ledge desk made from a plank of wood. The lucha libre poster came from the Lagunilla flea market in Mexico City. Photograph via @TinyAtlasQuarterly. 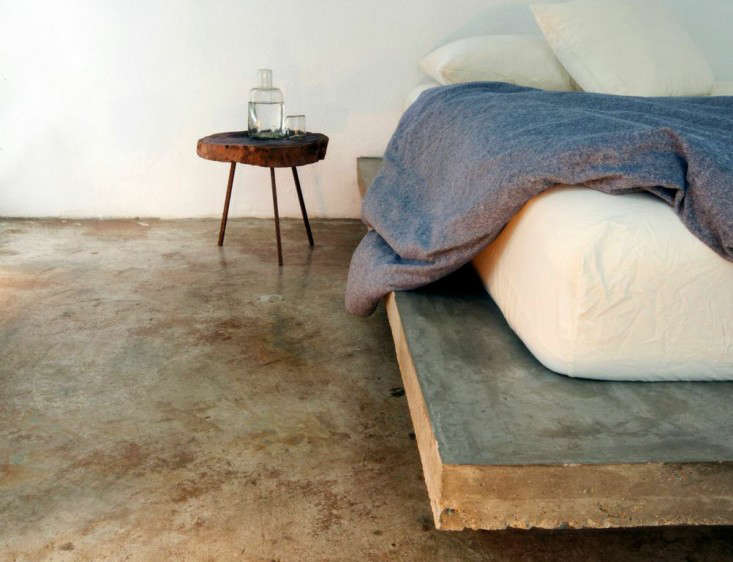 Above: “What I loved most about Drift is that so much was custom-made by local artisans,” Maggie told Tiny Atlas Quarterly.” Even the carafe and glasses in the rooms were hand-blown down the street.” To source your own, see 10 Easy Pieces: Bedside Water Carafes. Photograph via @bajacowboy. 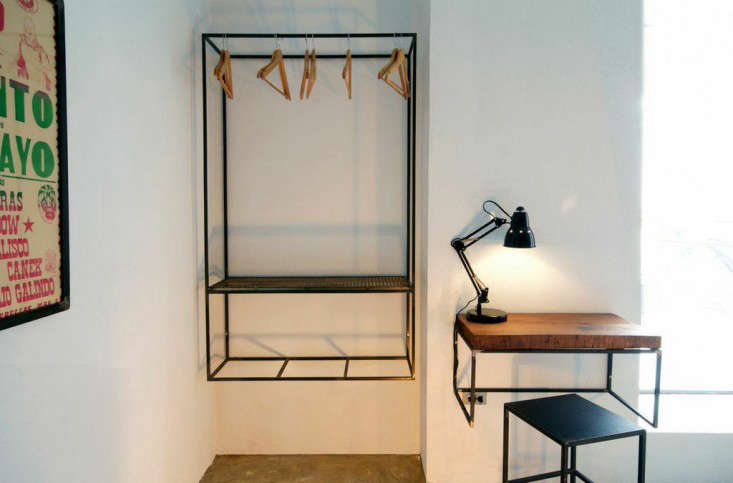 Above: The hotel’s ingenious wall-hung closets are made of welded steel: “Just the right amount of space to hang a hat for a few days,” says Stu. Photograph via @bajacowboy. 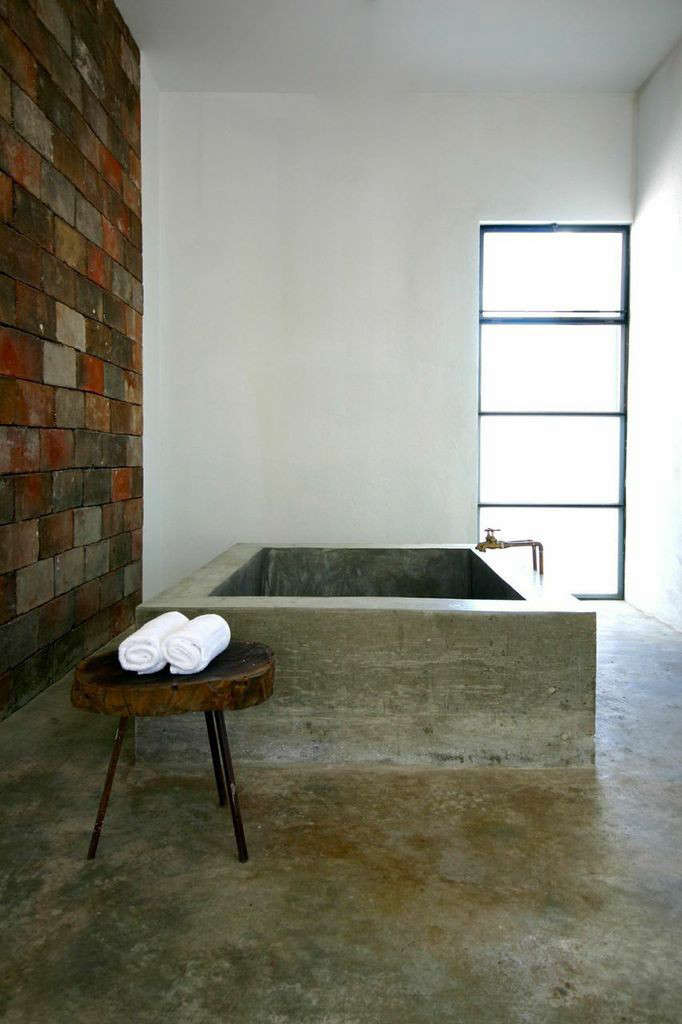 Above: The cast concrete bathtubs are modeled after the water troughs at local ranches. Photograph via @bajacowboy. 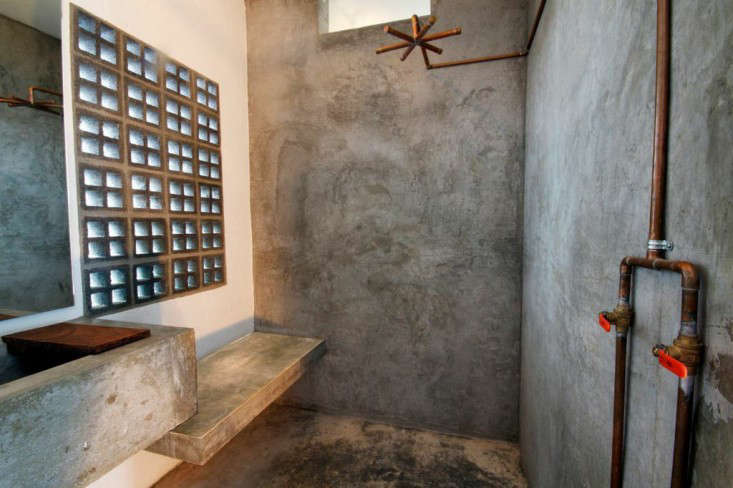 Above: A concrete shower with a cinderblock ventilation window and a custom rain showerhead made by Solis, the Drift’s plumber. Photograph via @bajacowboy. 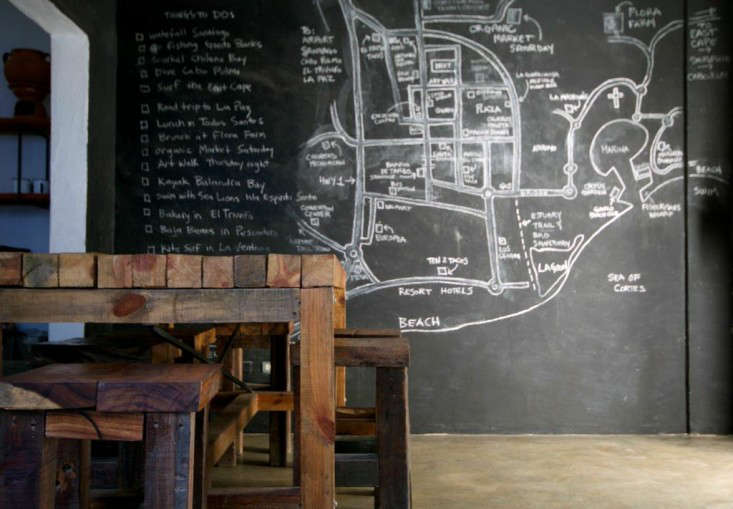 Above: There’s a communal kitchen set up for guests to use. The chalkboard wall details all the things to see and do in and around San Jose del Cabo–the beach (and surfing and diving) are the focus, but there’s also a lively arts scene, and you can hike to a swimming hole with a 40-foot waterfall. Go to Tiny Atlas Quarterly to get the details. Photograph via @bajacowboy. 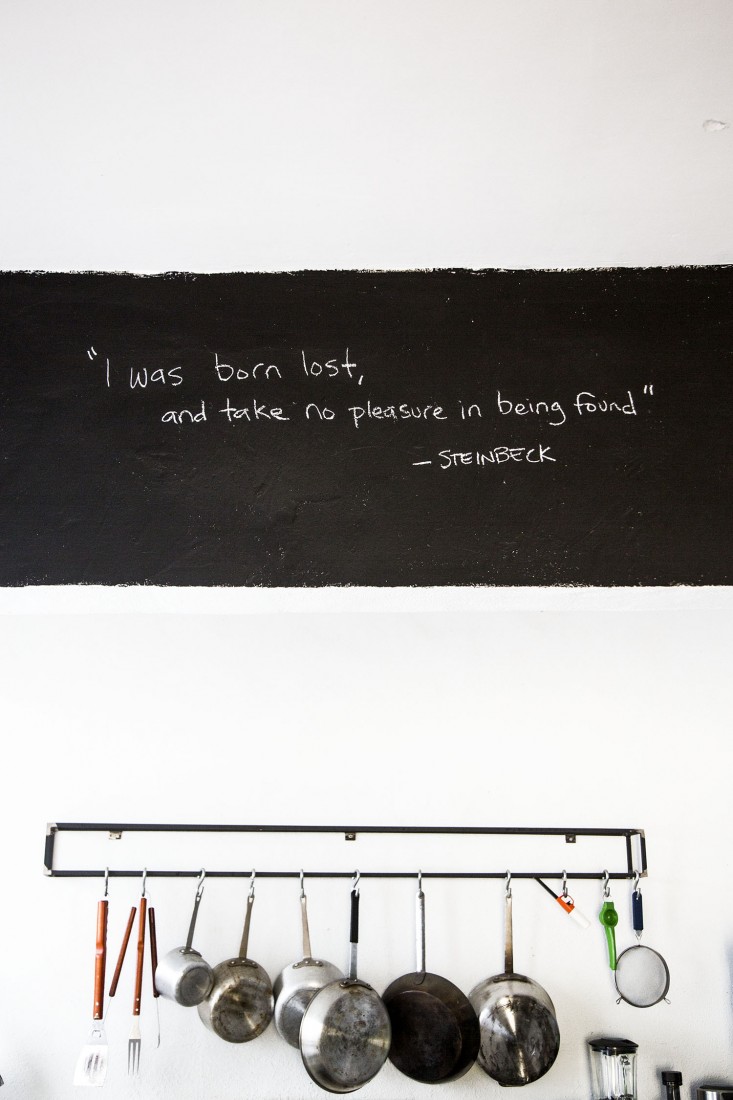 Above: A band of chalkboard paint with a message from John Steinbeck to fellow vagabonds. Like the Drift’s closets, the pot rack is made of welded steel. 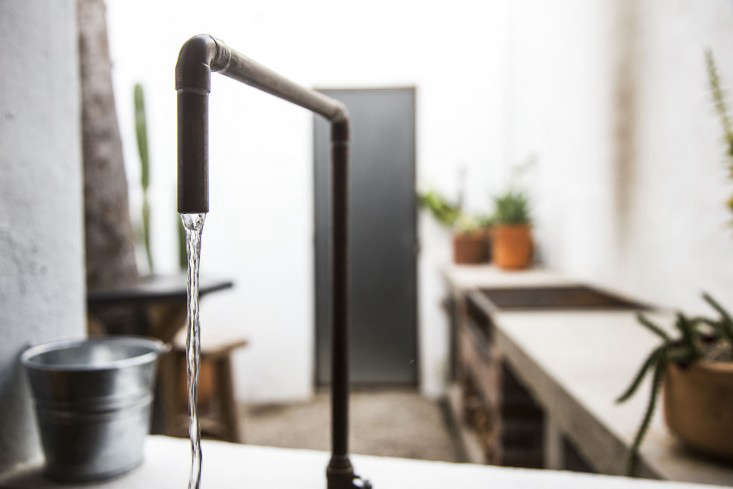 Above: The kitchen’s copper faucet is another Solis the plumber creation. Photograph via @TinyAtlasQuarterly. 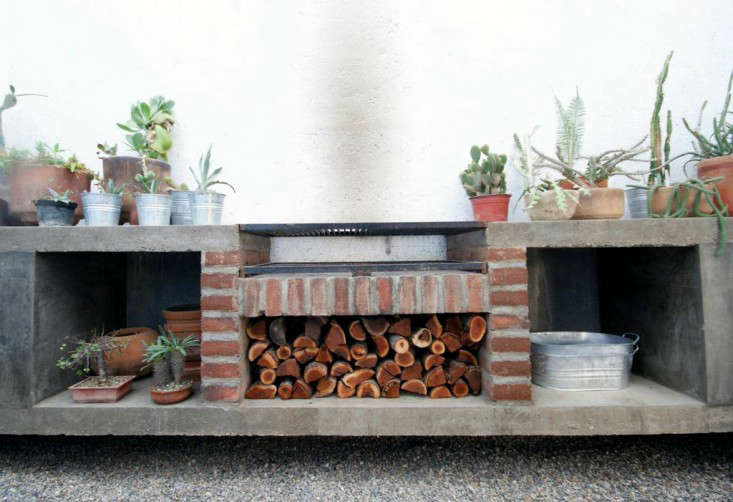 Above: Guests are encouraged to cook their own meals on an Argentine-style grill stocked with mesquite gathered locally. Photograph via @bajacowboy. 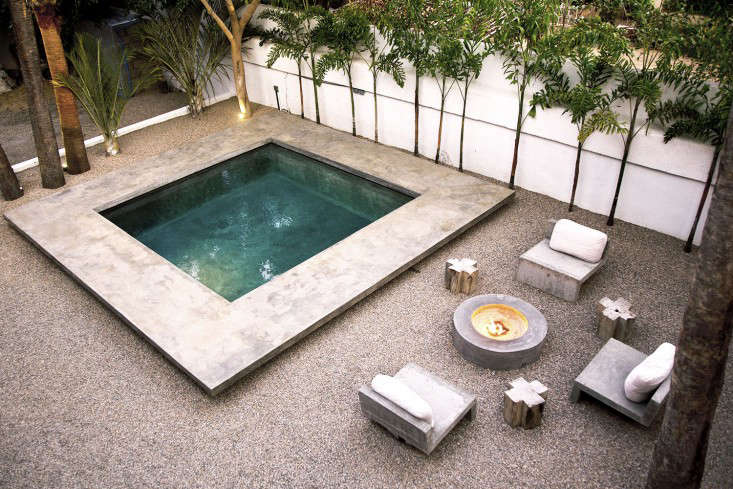 Above: The swimming pool is “made of nothing more than poured concrete,” says Stu. “The rustic quality of the concrete reflects light in a more beautiful and honest way than commercial finishes or ceramic tile.” Photograph via @TinyAtlasQuarterly. 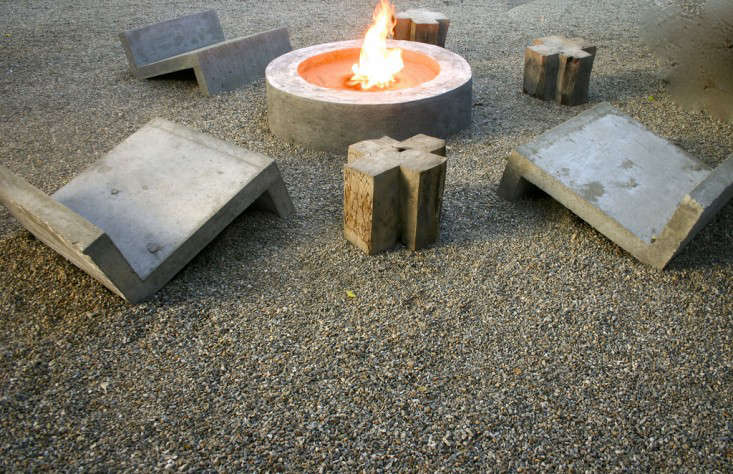 Above: The poolside fire pit and surrounding furniture are also concrete. Photograph via @bajacowboy. 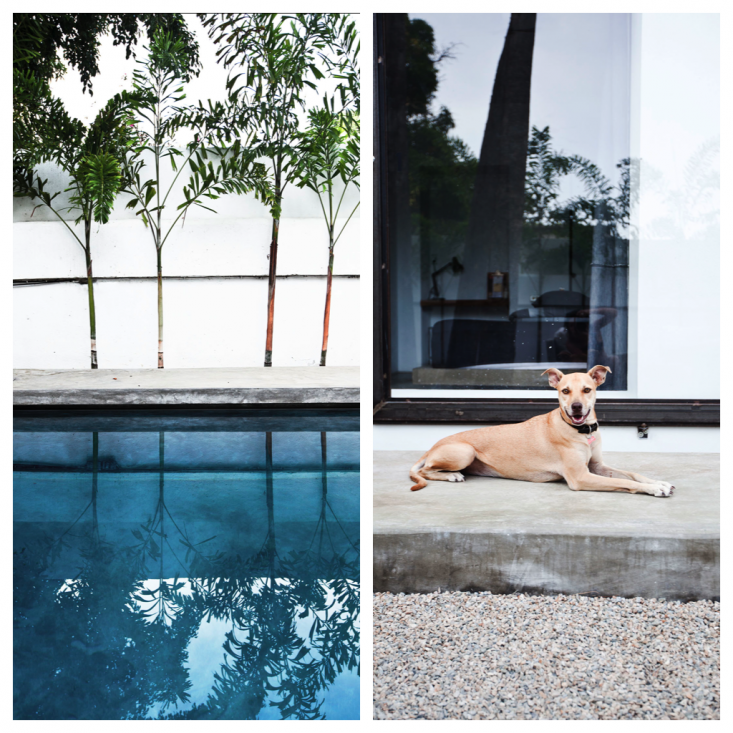 Above: Clara, the Drift’s adopted dog, rests in front of a guest room window that doubles as a door. Photographs via @TinyAtlasQuarterly. 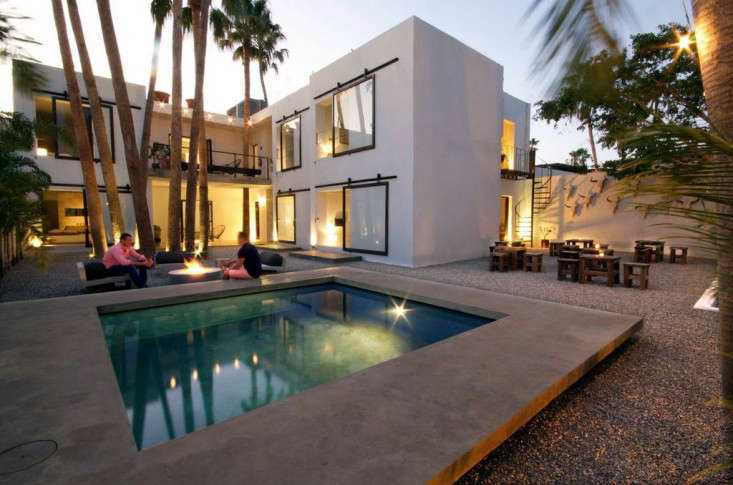 Above: All of the rooms have windows that open to the central courtyard. Photograph via @bajacowboy.

Drift San Jose is located 20 minutes from the Los Cabos International Airport in the downtown art district of San Jose del Cabo, near the tip of the Baja peninsula. Rooms are $75 per night, and are booked through Airbnb. Go to Drift San Jose for more details.

Steal This Look: A Room at the Ace Hotel in Shoreditch, London