SF-based New Zealander Joanne Zorkendorfer spent almost a decade working as an industrial designer at the prestigious design firm Ideo before branching off on her own. The idea for Olli came when she took a sabbatical to teach at the National Institute of Design in India. “That’s when I got a glimpse of what I could do,” she says. “I visited village craftspeople and saw that the way their work was being presented was not going to captivate a larger audience–it wasn’t up to date. So I started thinking about ways to change that.” Her solution? She founded Olli, a “luxury craft” company specializing in merging traditional designs and techniques with modern forms. 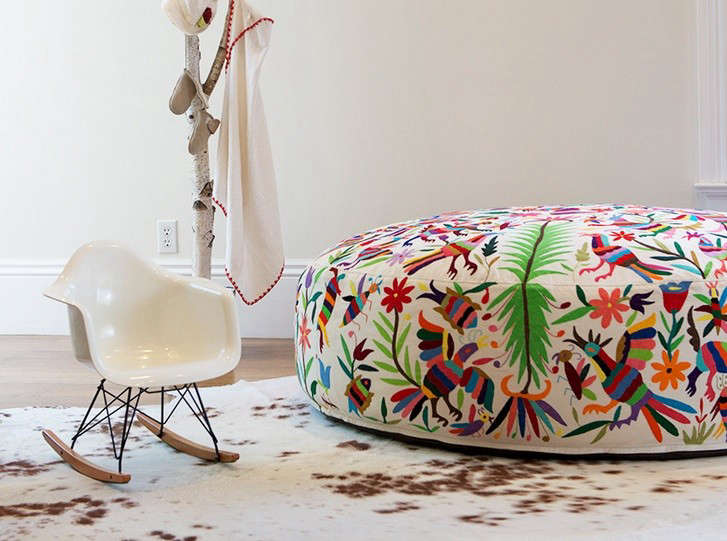 Above: Olli’s one-of-a-kind, oversized lounger is a simple design that Zorkendorfer uses as a blank canvas for embroideries. For her first series, the Otomi collection, she enlisted a collective of 12 women artisans to embroider the covers. The women, Otomi Indians from Tenango, Mexico, each take three to four months to complete a cover. Shown here, the limited-edition Multicolored Lounger; $4,100. The artisans set the pricing and although high, it represents fair wages. “It’s not feasible to make hundreds of these,” notes Zorkendorfer. “This is really small-scale and a celebration of the amount of handwork that goes into each piece.” 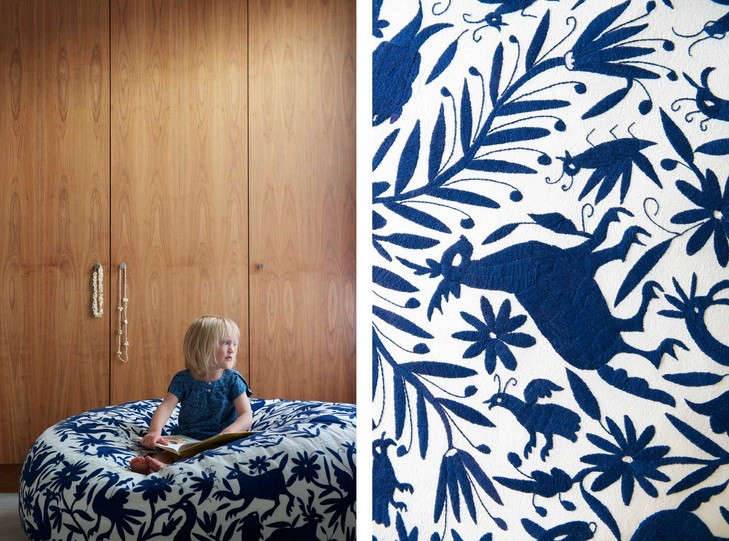 Above: The Lounger in navy; $3,400. Unlike a beanbag chair, which gets rock hard once more than one person sits on it, the lounger remains soft and comfy and has room for two. Zorkendorfer spent two years researching the ideal filling: “I was obsessed with finding filling other than polystyrene beads, and I wanted that sexy, voluptuous feel you get in a beanbag.” She prototyped many options, including foam (too bouncy), recycled foam (too flat), all feathers (not substantial enough), wool, felt, coffee beans, and recycled scrap materials. Buckwheat hulls proved to be perfect except for the fact that they’re heavy–it took three people to move that lounger. In the end, Zorkendorfer devised a combination of materials consisting of a polyester fiber core, foam discs, and a feather topper which “puffs up nicely and gives the loungers loft and luxuriousness”. 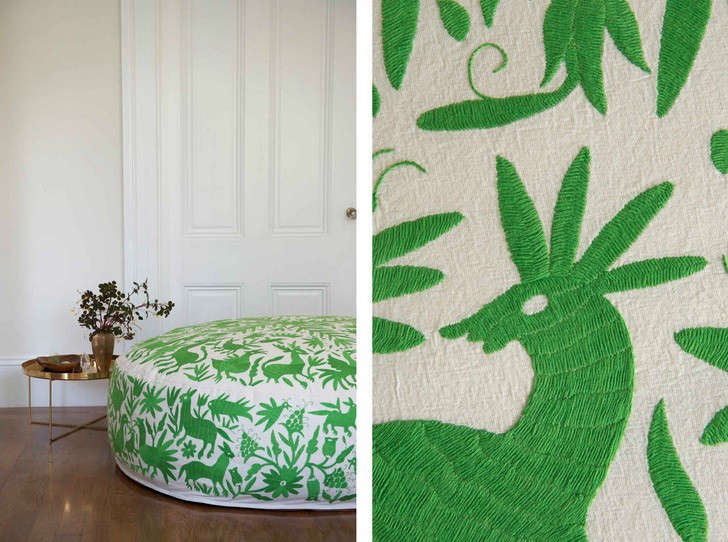 Above: The Lounger in kelly green; $3,400. Zorkendorfer found the Otomi artisans she works with when she purchased some traditional embroidery online having fallen in love with its modern graphic appeal. The seller, a textile historian, put her in touch with an embroidery collective of women in Tenango, Mexico. “I work really closely with the best artisans,” says Zorkendorfer. “Once the embroidery is complete, it’s shipped to San Francisco where I work with a master sewer to put the loungers together.” 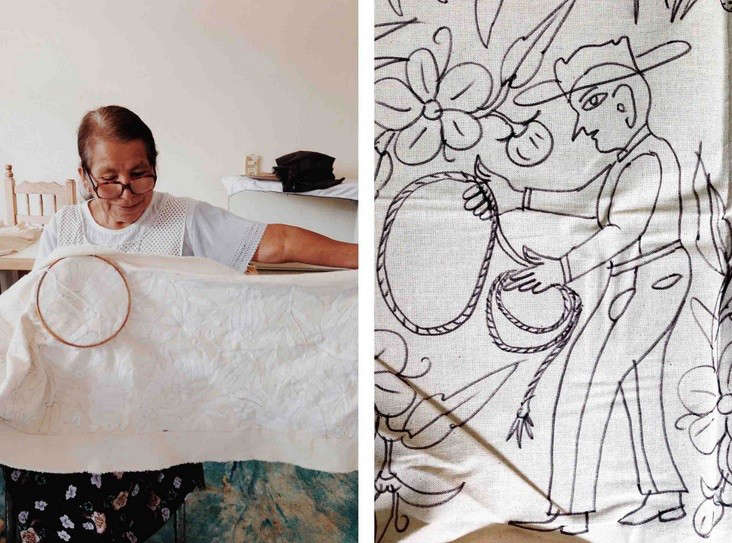 Above: The traditional motifs are sketched freehand onto the fabric by the Otomi women, then the pattern is hand “¨embroidered in cotton thread. Zorkendorfer quickly learned that patience is required, and has had to set up her production schedule accordingly. “It has required a little bit of unlearning and being respectful of the artisans’ pace and sense of time”. 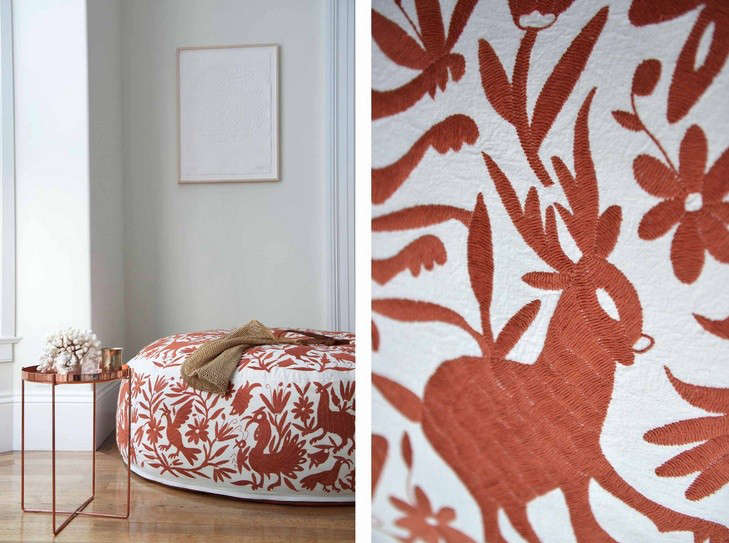 Above: The Lounger in terracotta, $3,400. “I am really interested in the energy of handmade work,” Zorkendorfer tells us. “I have a theory that when an artist or maker works on a piece for a long time, some of the energy lives in that piece. I want people to have an emotional reaction to the work.” 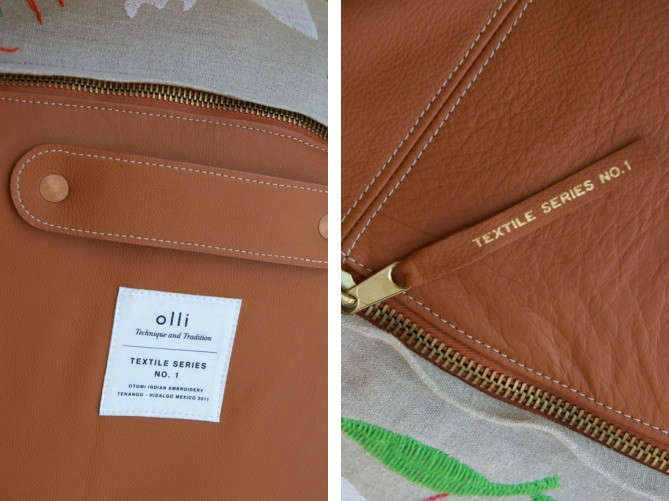 Above: The base of each lounger is made from leather and has a large brass zipper separating the fabric cover from the leather to allow for cleaning. The leather base is detailed with two sturdy leather handles for carrying and sliding across a room. Made in a limited edition, each lounger is signed by the embroiderer and labeled with an Olli series number and a description of where it was embroidered.

N.B. Zorkendorfer also sells Cushions with the same embroidery as the loungers for $275 each. For more on the company, visit Olli.

Zorkendorfer shares a studio in the Heath Factory with a fellow slow designer, weaver Adelle Stafford of Voices of Industry, whose work is featured in our post Farm-to-Table Textiles. Their neighbor, Matt Dick of Small Trade Company, also works on a small, handcrafted scale. Read about him in our Studio Visit: Small Trade Company Gets Big.

DIY: How to Make A Copper Pipe Curtain Rod for $35

Calm, Protective, and Rosy: 12 Ideas to Steal from a Paris Cafe By Gesa Hansen