Two years ago, Sara and Rich Combs were on a monthlong cross-country road trip when they visited the Southern California desert outpost of Joshua Tree. They only stayed a night, but it was long enough to take a hike, size up the funky little community, and fall in love: “It’s a place that instantly relaxes and inspires.” Soon, they were back and buying a house in town. “We joke that rather than dating Joshua Tree, we just asked it to marry us.”

Despite the fact that their home base and Web design business are in San Francisco—an eight-hour drive up the length of the state—the newly minted remodelers embarked on a total overhaul of the place themselves, working over much of a summer. That became the Joshua Tree House, their first Airbnb property. They’ve since succumbed, entirely unplanned they say, to a second too-good-to-pass up house that required, among other things, a new kitchen and bath. Our friend NYC-based photographer Kate Sears was among the first to check in. 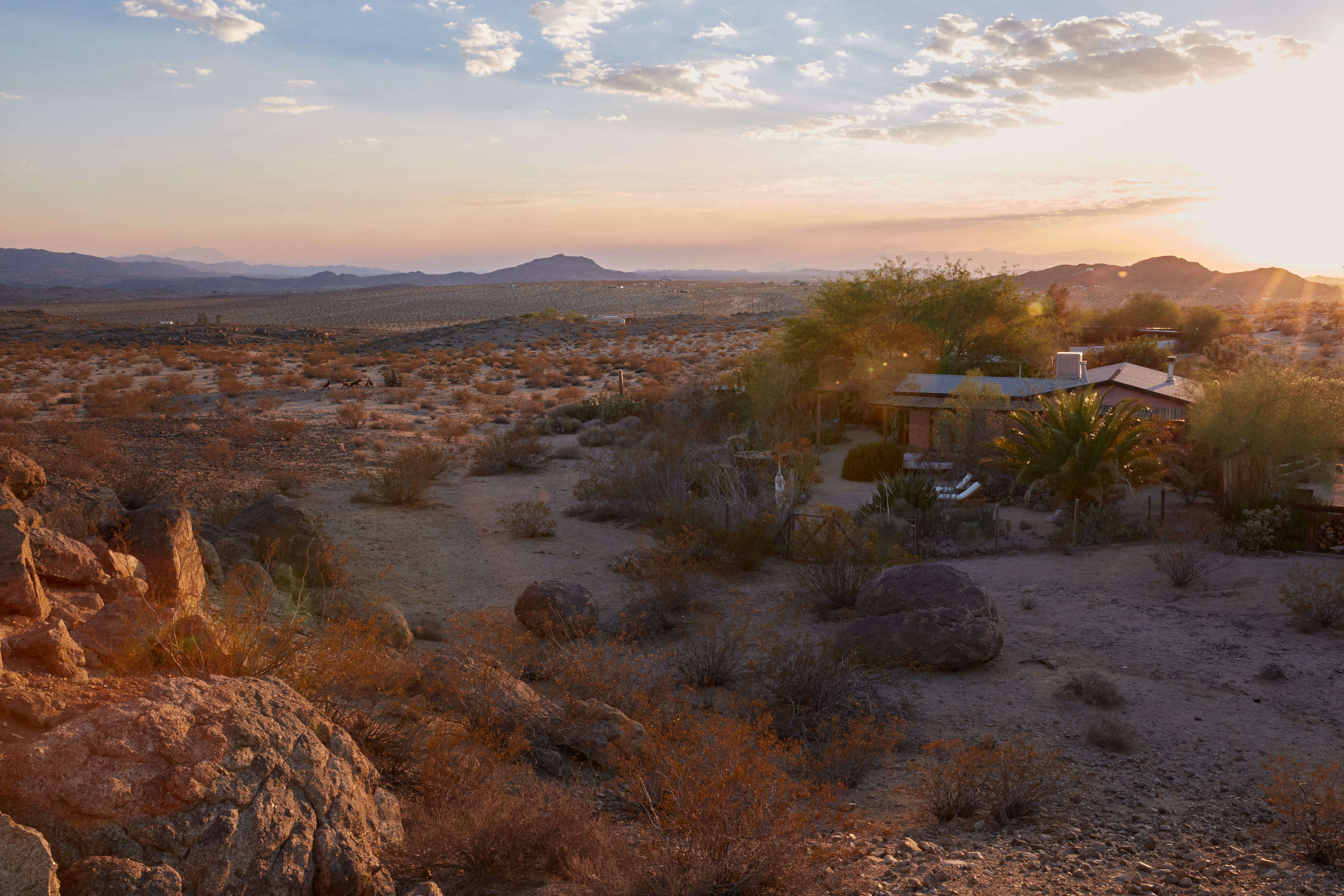 Above: Built in 1958 as a homesteader cabin, The Casita is surrounded by 900 acres of protected land that serves as a wildlife corridor to Joshua Tree National Park, 20 minutes down the sandy road. Town is about 12 minutes away. 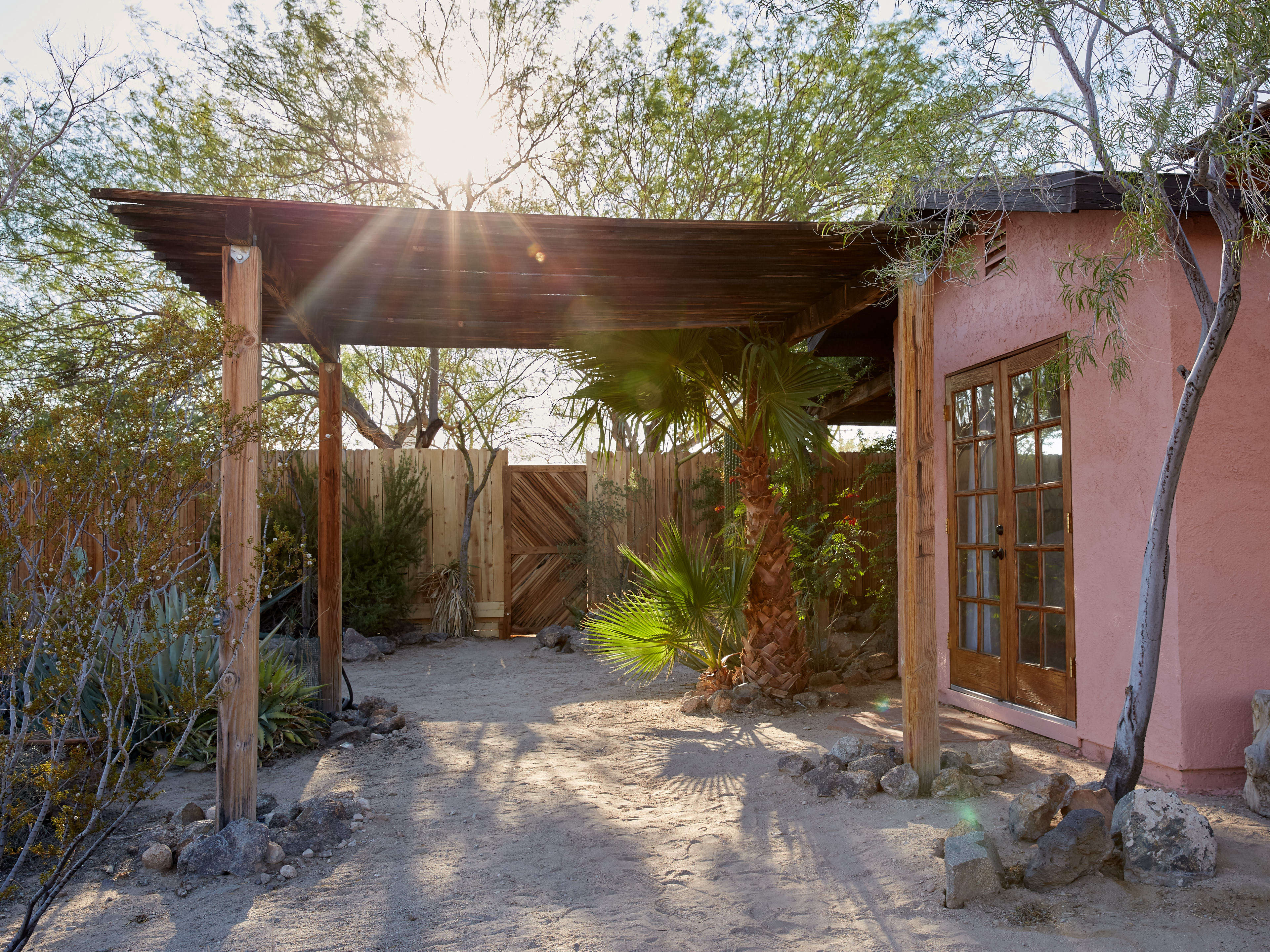 Above: A wood pergola extends out from the entry, connecting the newly painted house to the garden. Mature palms, cacti, and other plantings were already in place; it was the secluded grounds that the couple fell in love with. 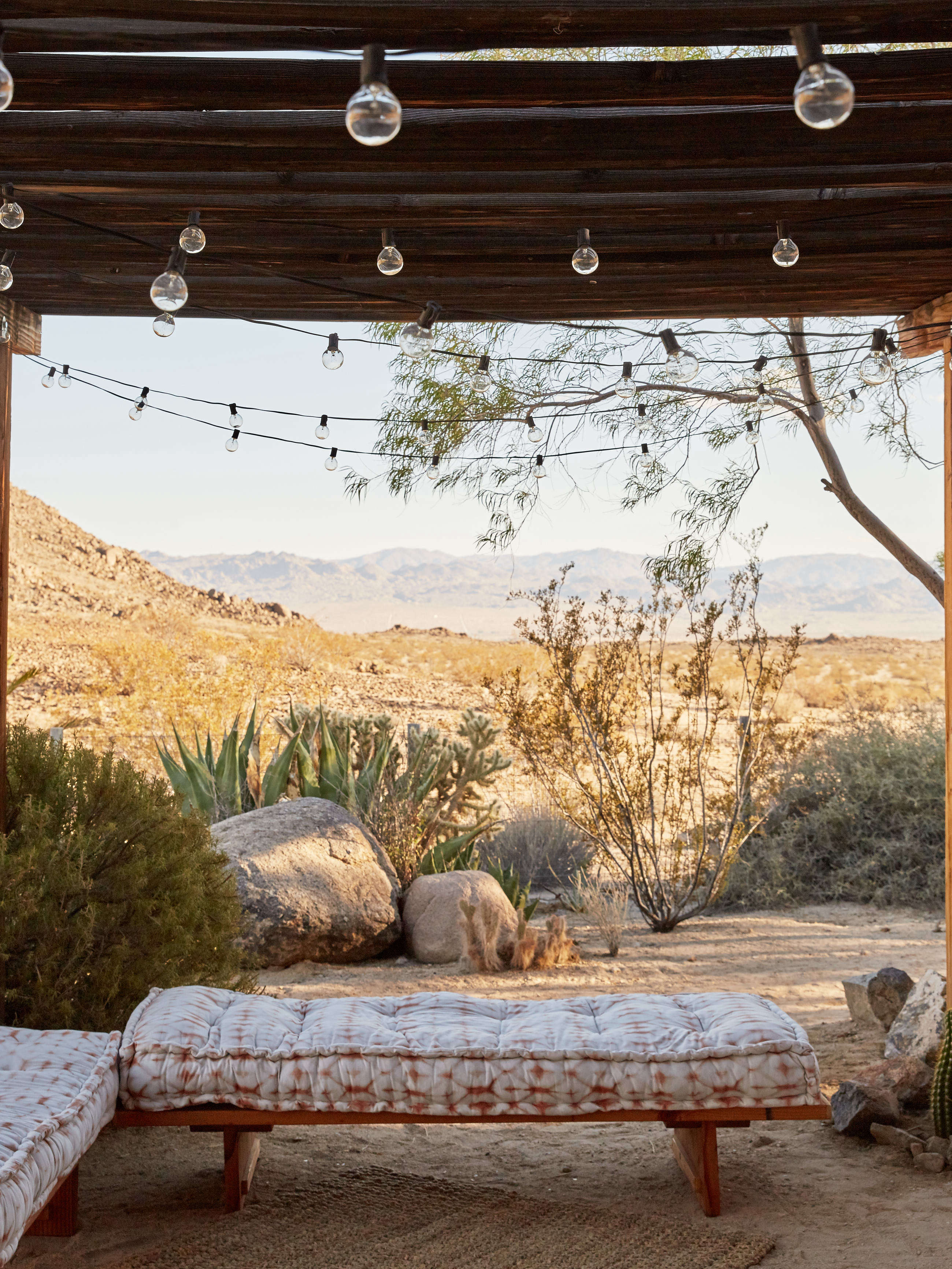 Above: Outdoor daybeds are positioned for taking in the landscape and the silence. 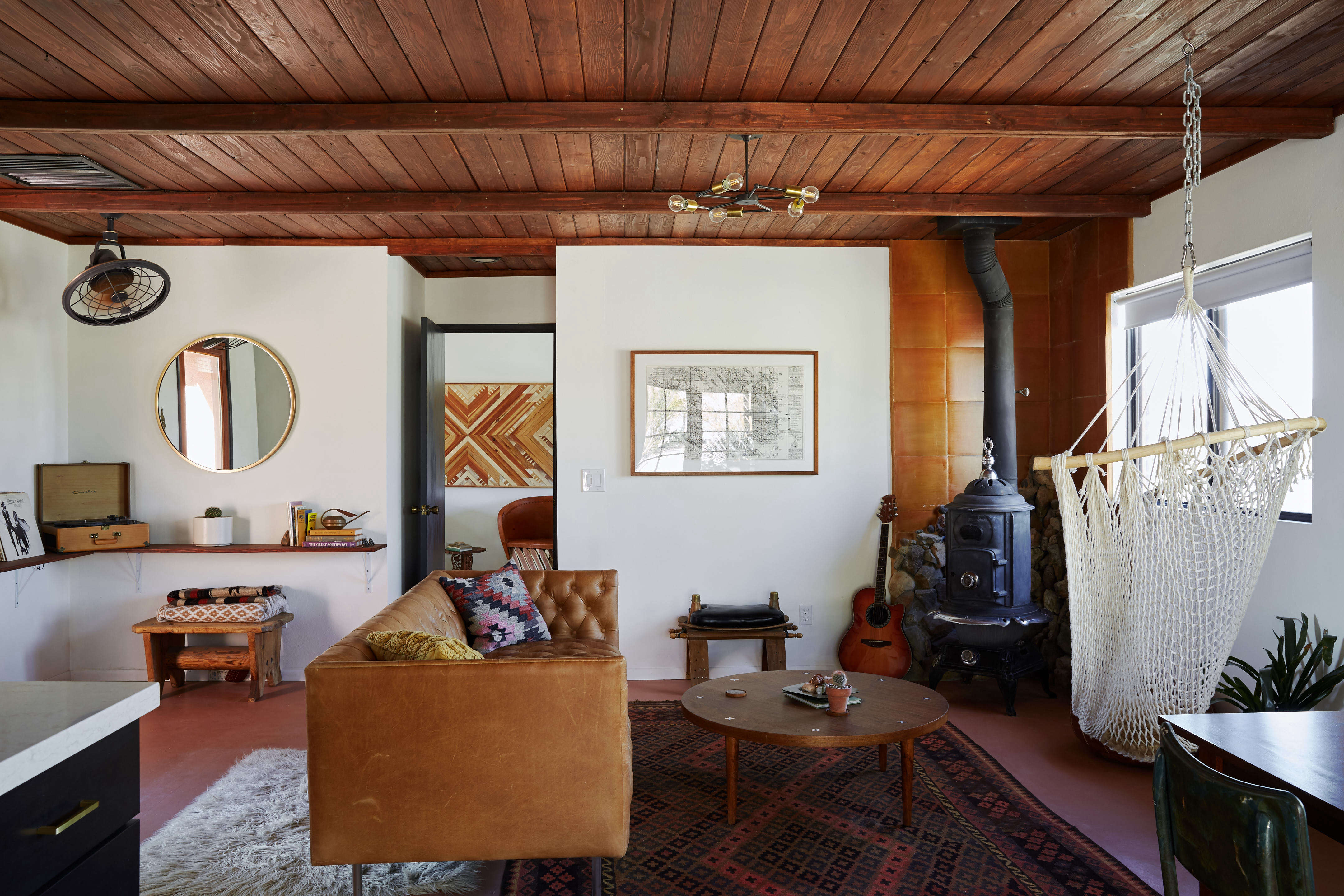 Above: Aiming to “bring the house into modern times while holding on to its western charm,” they launched the project by tearing down walls in the living area. “The flow was awkward and once we got rid of some walls, the space was completely transformed,” says Sarah.

Budget-conscious from start to finish, they called in help as needed—to make sure nothing load-bearing came down, for instance, and take care of large electrical and plumbing needs—but mostly went it alone. 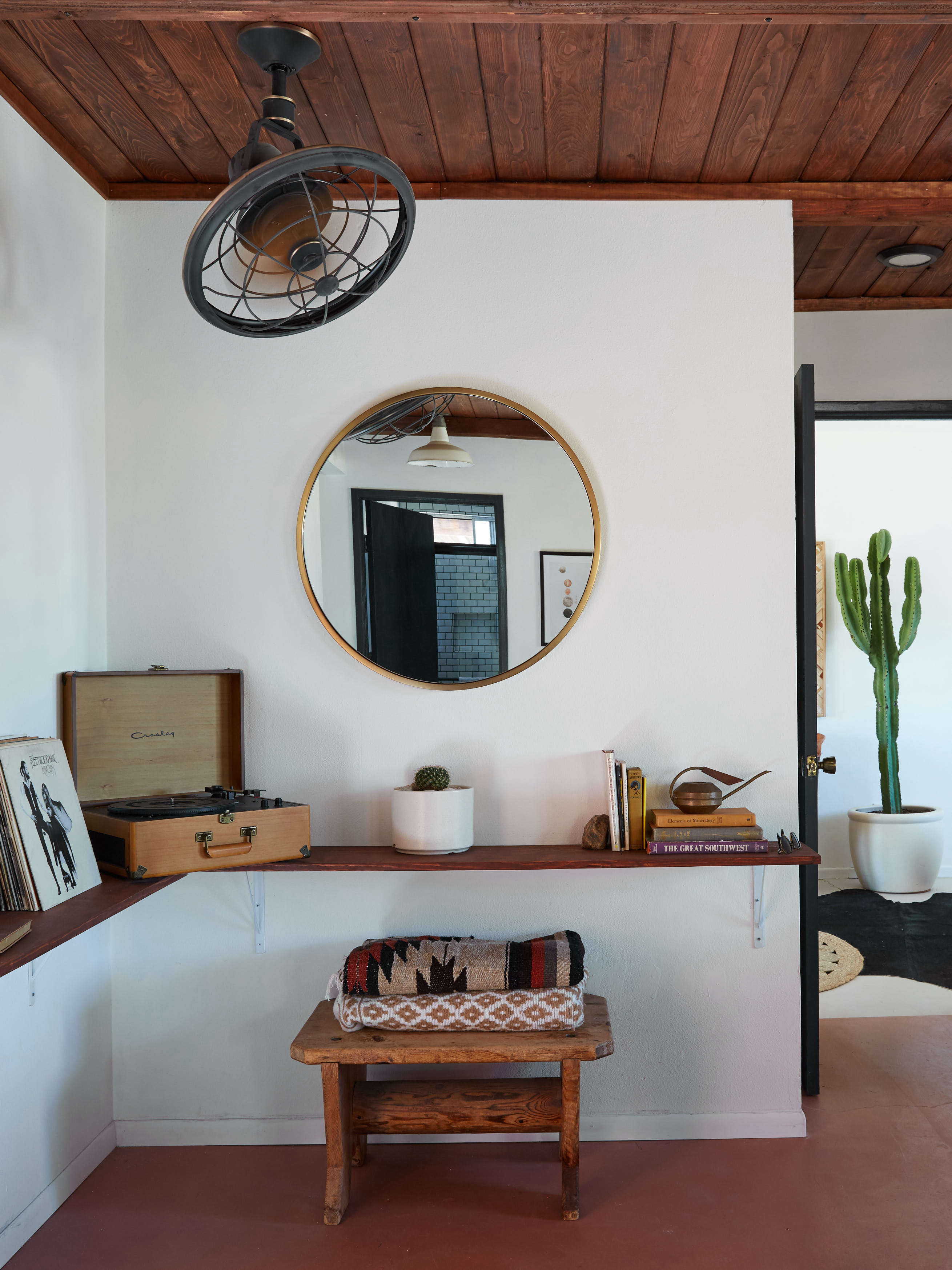 Above:  To retain a cabin feel, the couple ambitiously replaced the living area’s popcorn ceiling with tongue-and-groove paneling. We’ve shown easy DIY paneled ceilings, but this is the real thing: “We used varying lengths of one-by-six-inch tongue-and-groove pine, sanded and stained each board, then slotted them together, and individually nailed them into the studs.” 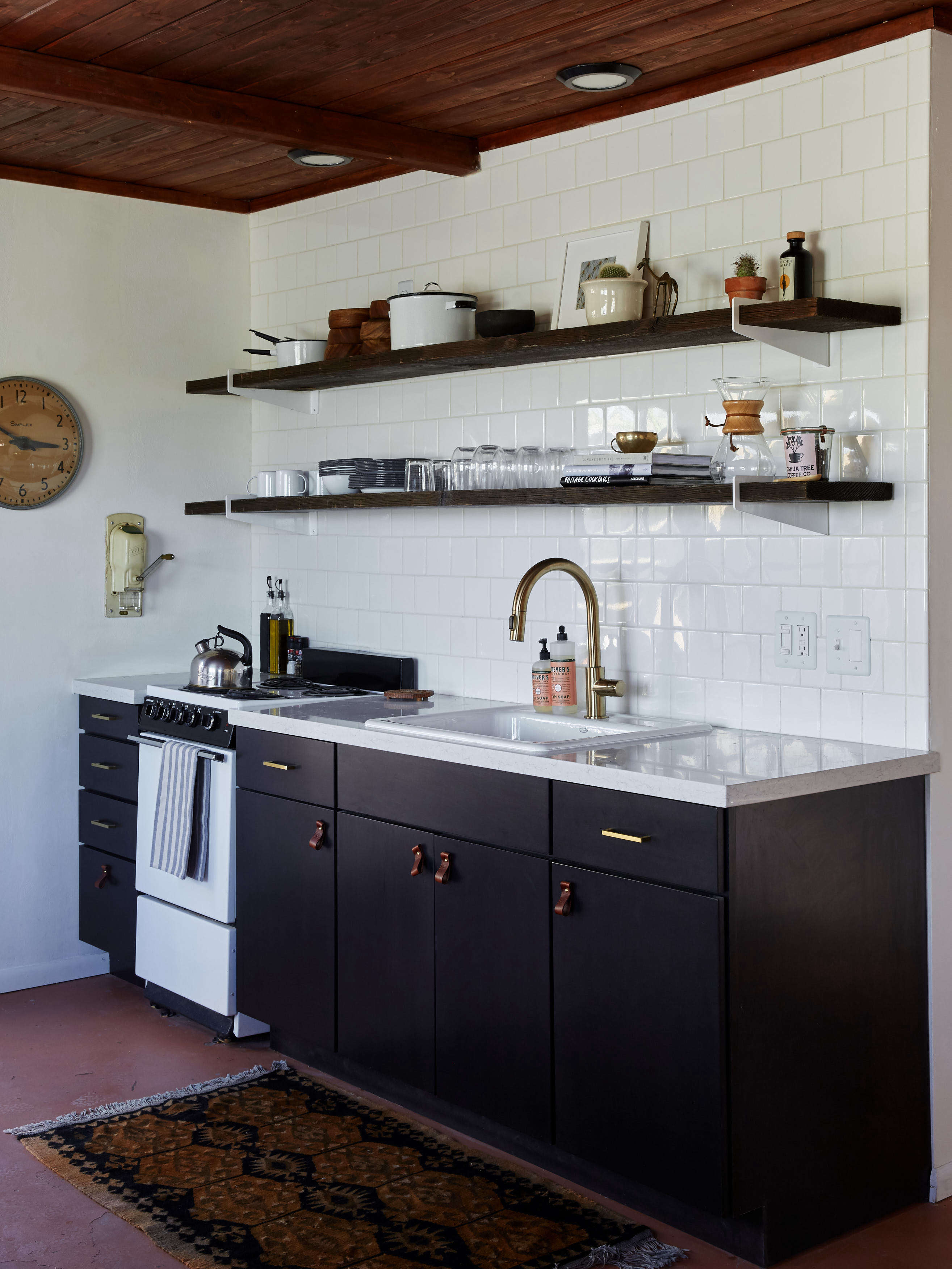 Above: How to tackle your first kitchen? “Rich’s dad is the owner of a hardware store and we’re so lucky to have his wealth of knowledge,” says Sara. “Between calls to him, YouTube videos, and reading, we learned as we went.”

In place of a kitchenette tucked into a closet, the living area now has an open kitchen with a simple white-tiled backsplash. They found their cabinets at Home Depot: “We picked out the various fronts, colors, sizes, and drawer types that we wanted and kitchen designers on staff helped us customize them right there on the spot.” They used Thomasville’s Blythe Cabinet Doors in charcoal and made the leather pulls themselves (to make your own, see our DIY video). 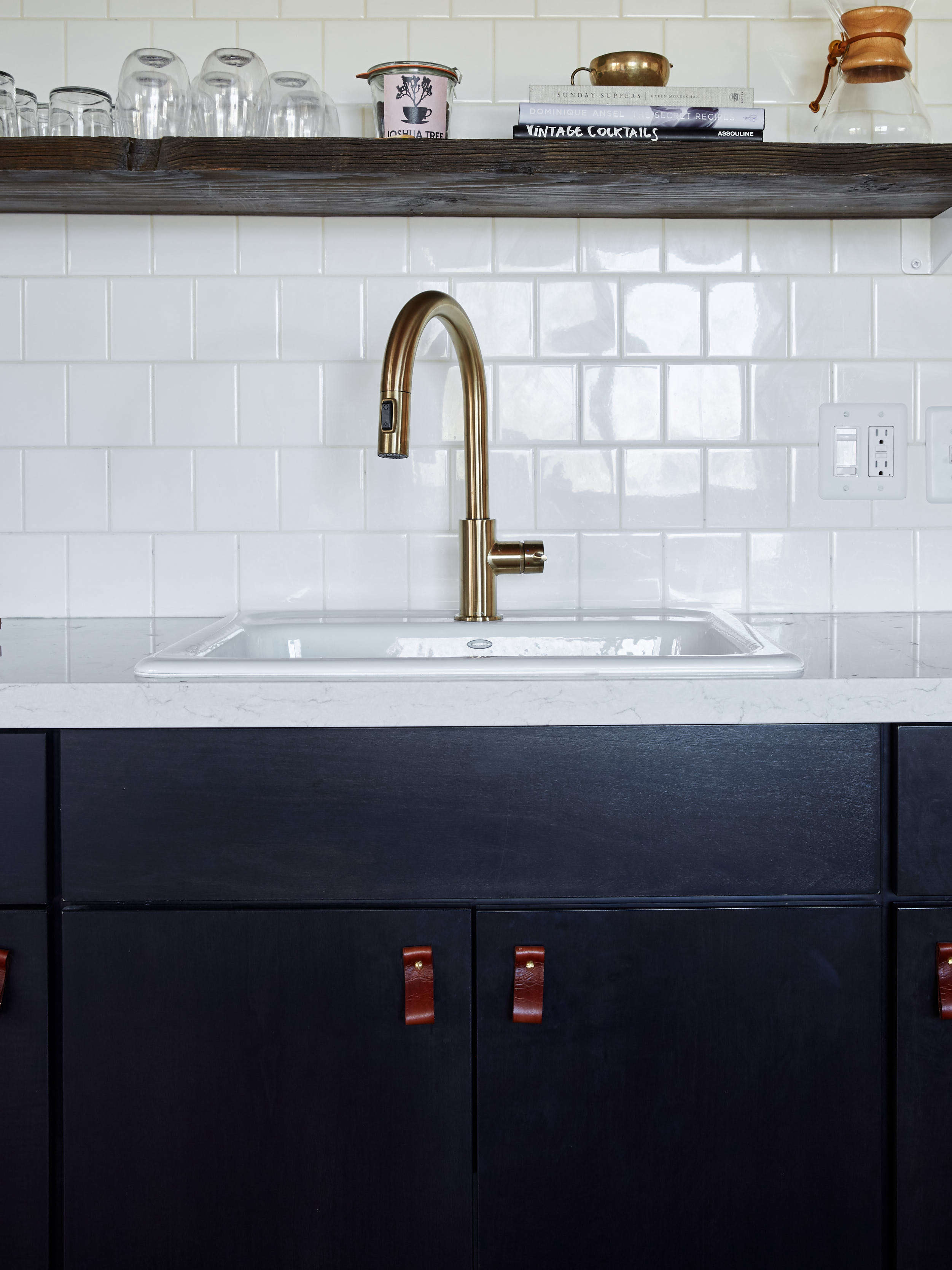 Above: The countertop is Snowy Ibiza Quartz from Home Depot, the sink, purchased via Wayfair, is Kohler’s Mayfield, and the Delta Trinsic Single-Handle Faucet came from Overstock.com. The white steel shelf brackets are Wallstirrups by Etsy seller Quartertwenty. 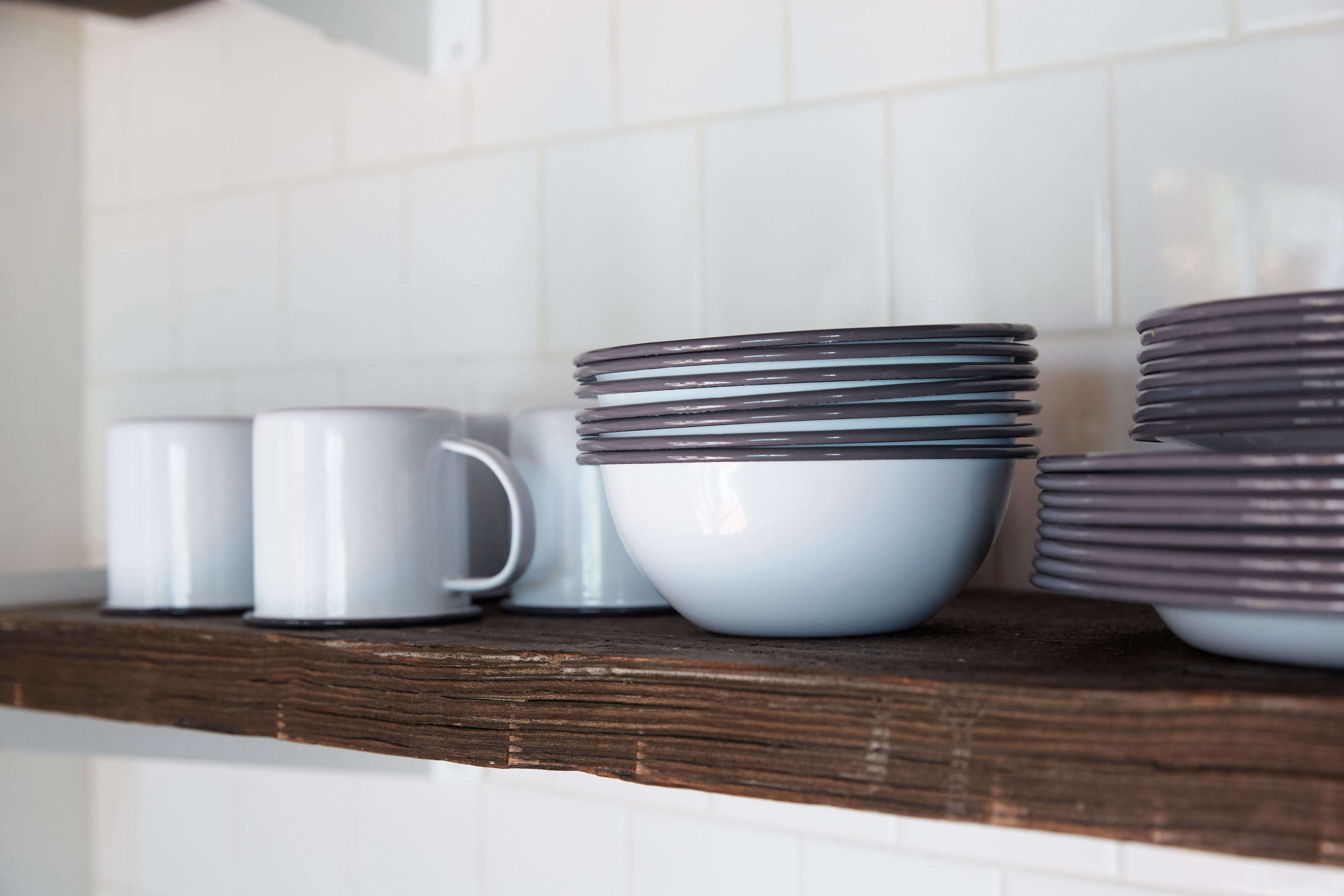 Above:  The kitchen’s black-and-white enamelware is from Urban Outfitters: $99 for a 16-Piece Starter Set. 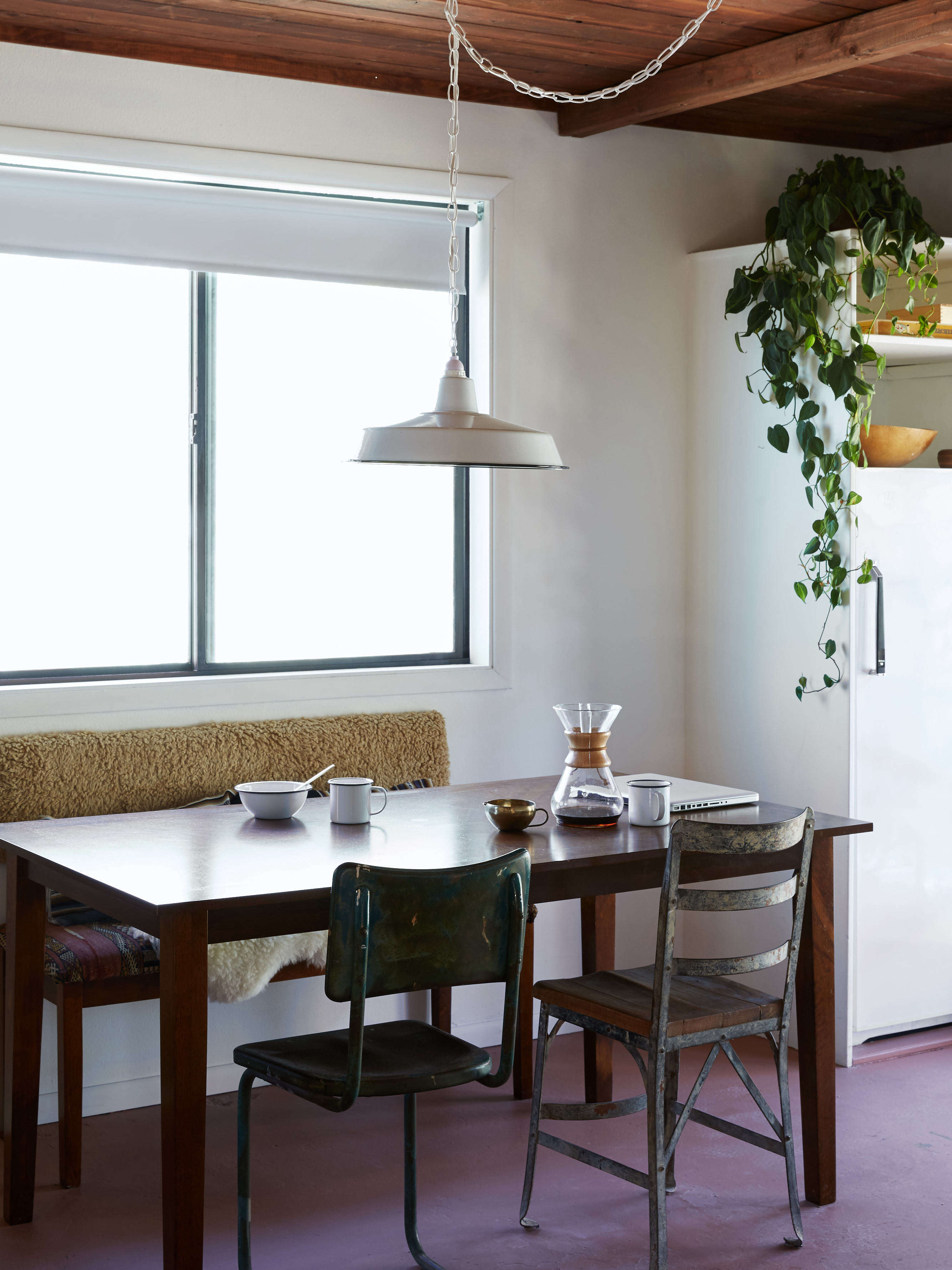 Above: Sara and Rich found most of the furnishings, including the dining table and chairs, at vintage stores in town. The Porcelain Factory Light is from Tinker Lighting. As a money saver, they were able to salvage the appliances from the existing kitchen. 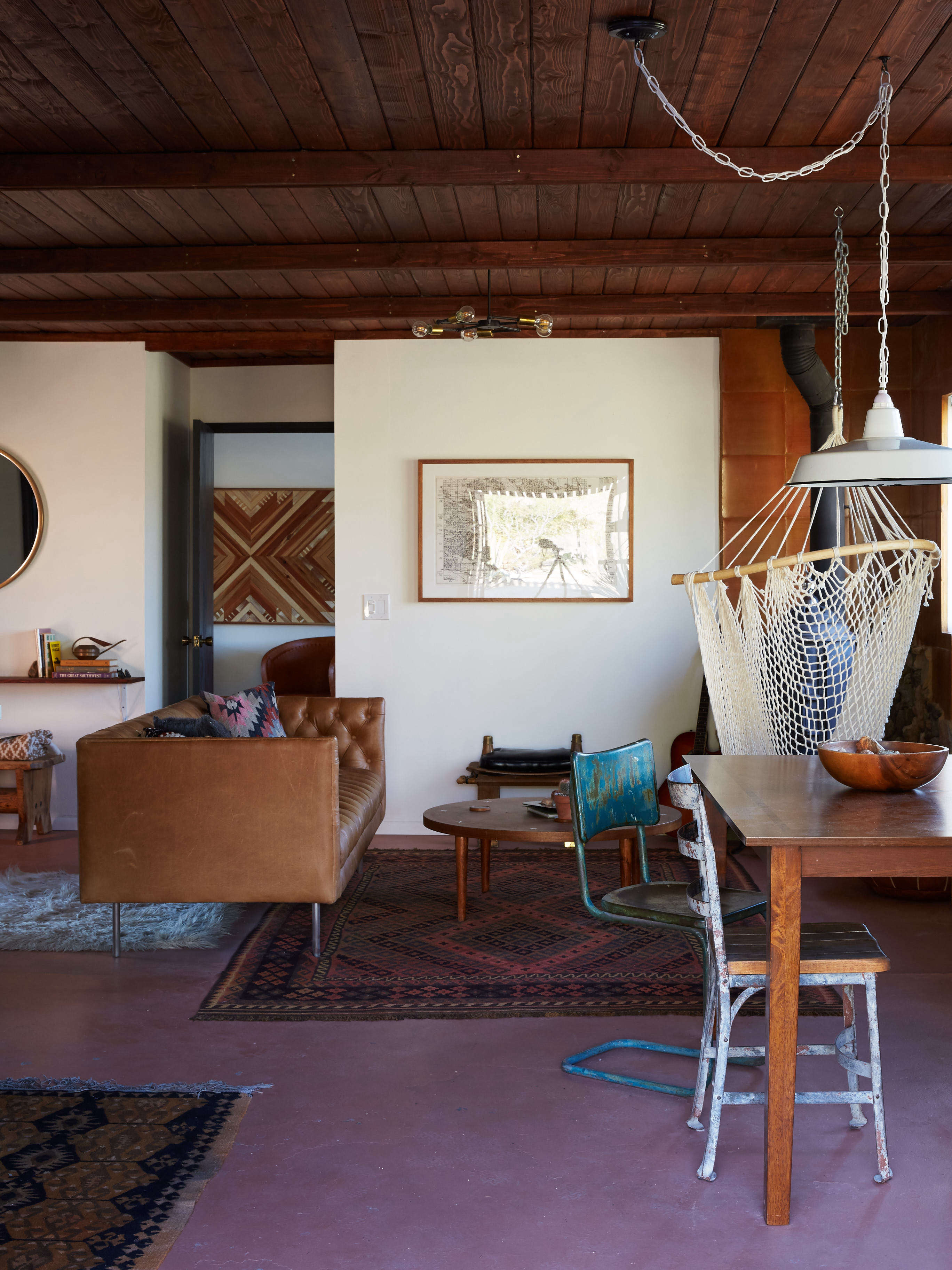 Above: The room has a Modern Chesterfield Sofa from West Elm and a vintage macramé swing positioned to catch the light. The overall palette was taken from the surrounding landscape, including the rosy floor, which is painted concrete that has quickly developed a pleasingly weathered look. 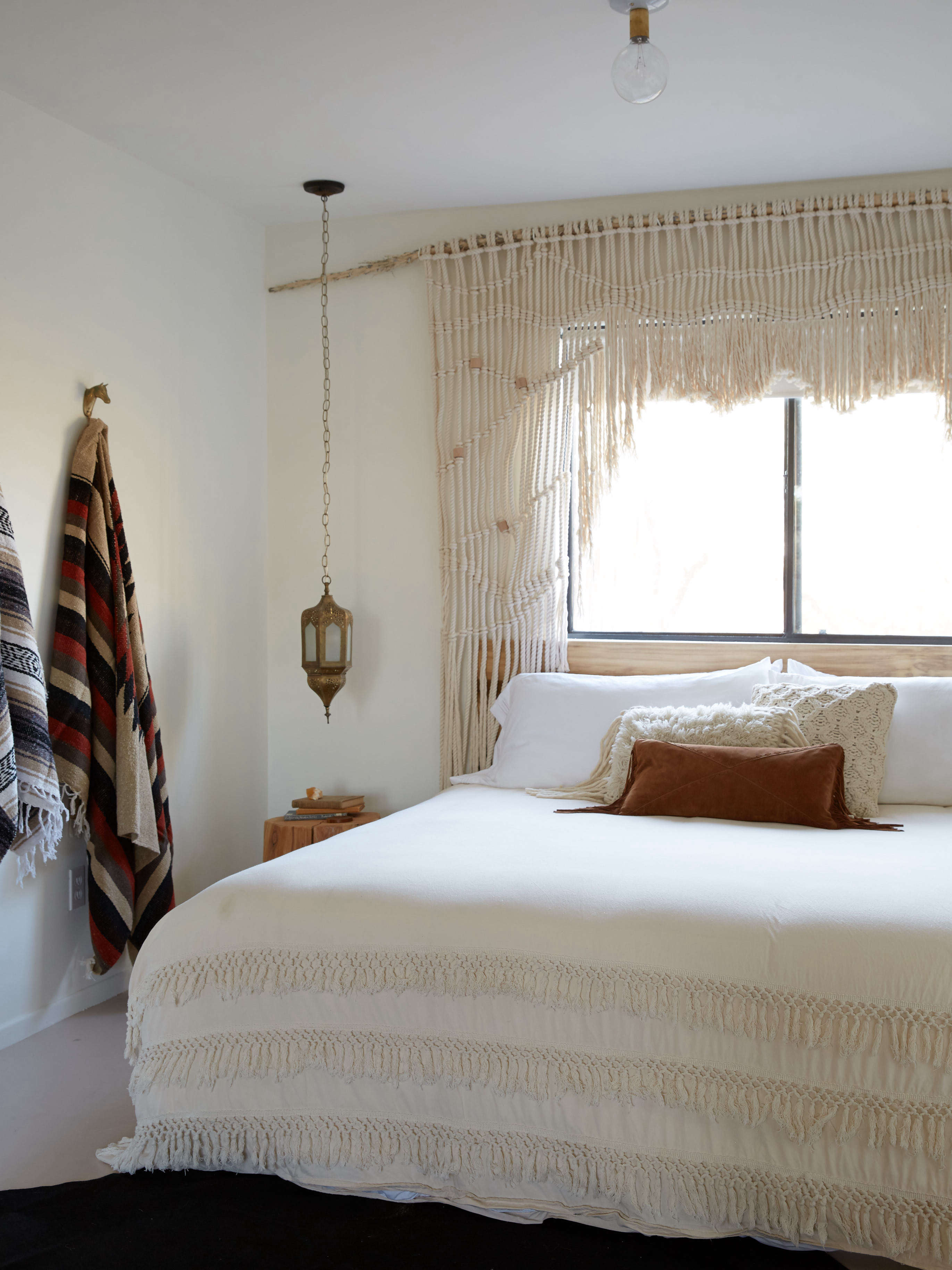 Above: At one point the house was divided into five bedrooms, but it now has two, each with newly replaced ceilings (no more popcorn) and windows. The couple paired a Tassel Duvet Cover from Urban Outfitters with a Moroccan lantern from Badia Design in LA. The white walls throughout are painted in Night Blooming Jasmine from Behr. 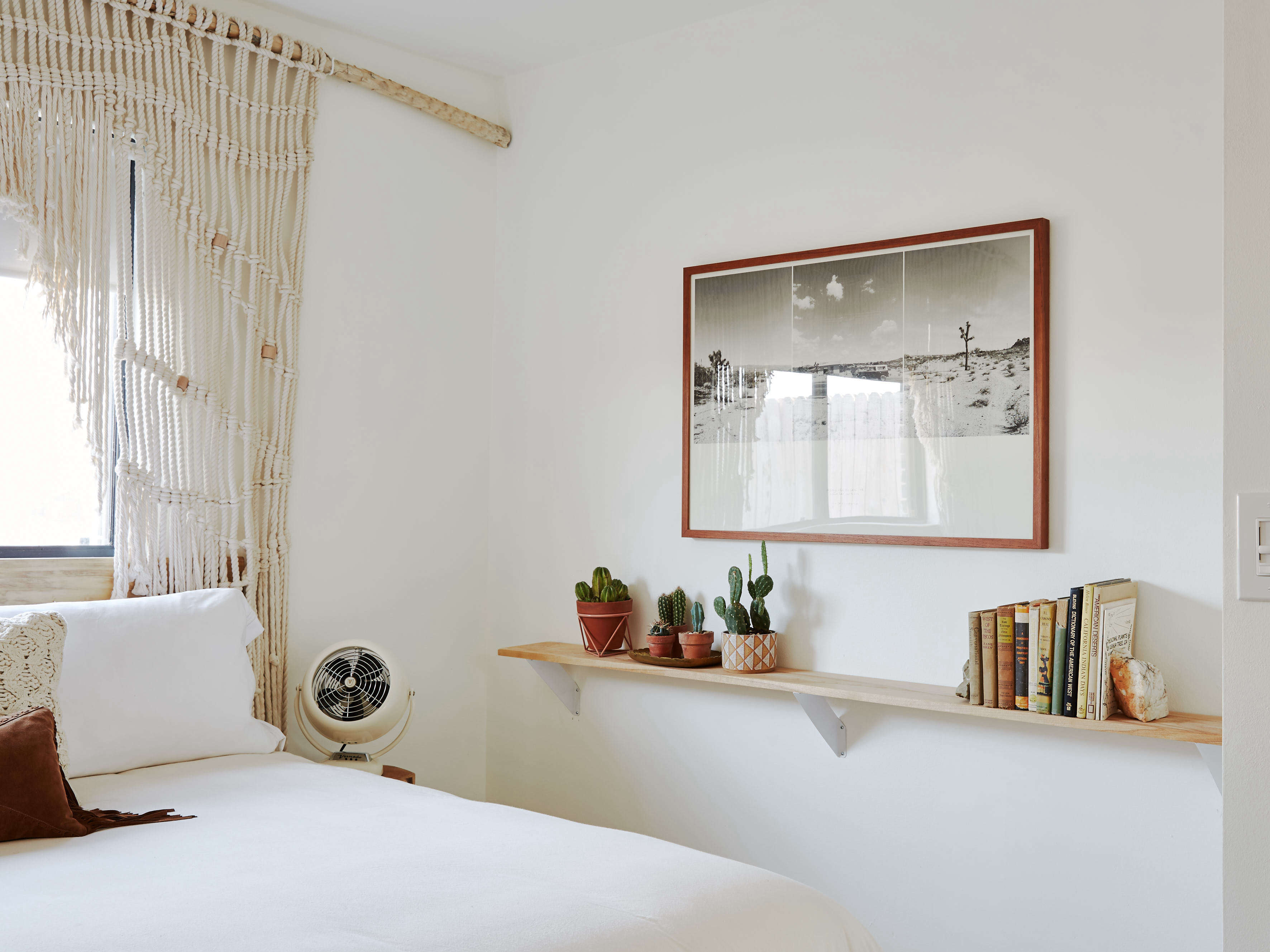 Above: Sara’s mother made the macramé curtain that frames the window. 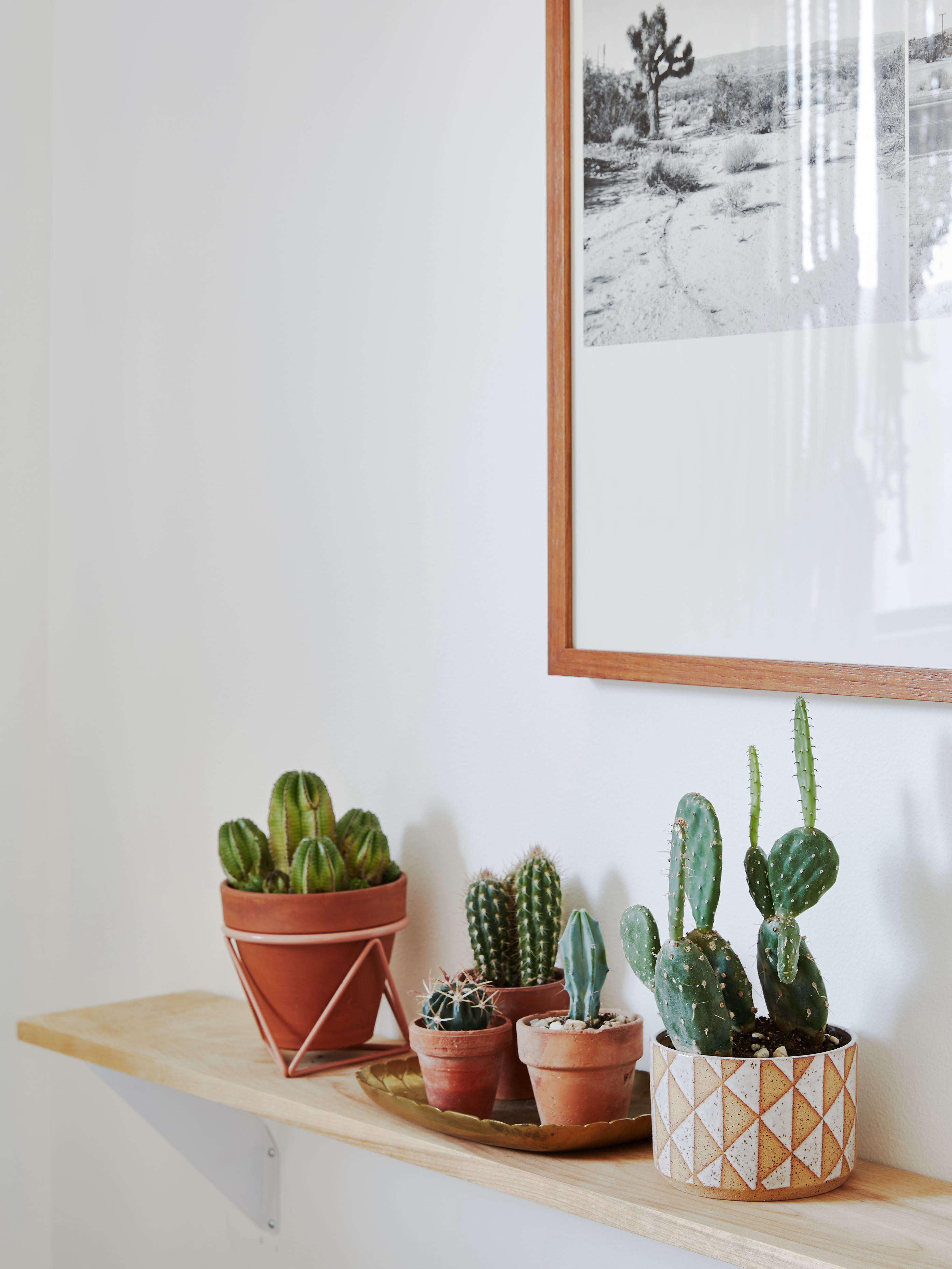 Above: An Eric Trine metal pot holder (a discontinued West Elm design) and a patterned pot by Bkb Ceramics on the plant shelf. The Joshua Tree photo is by Julie Kostreva. 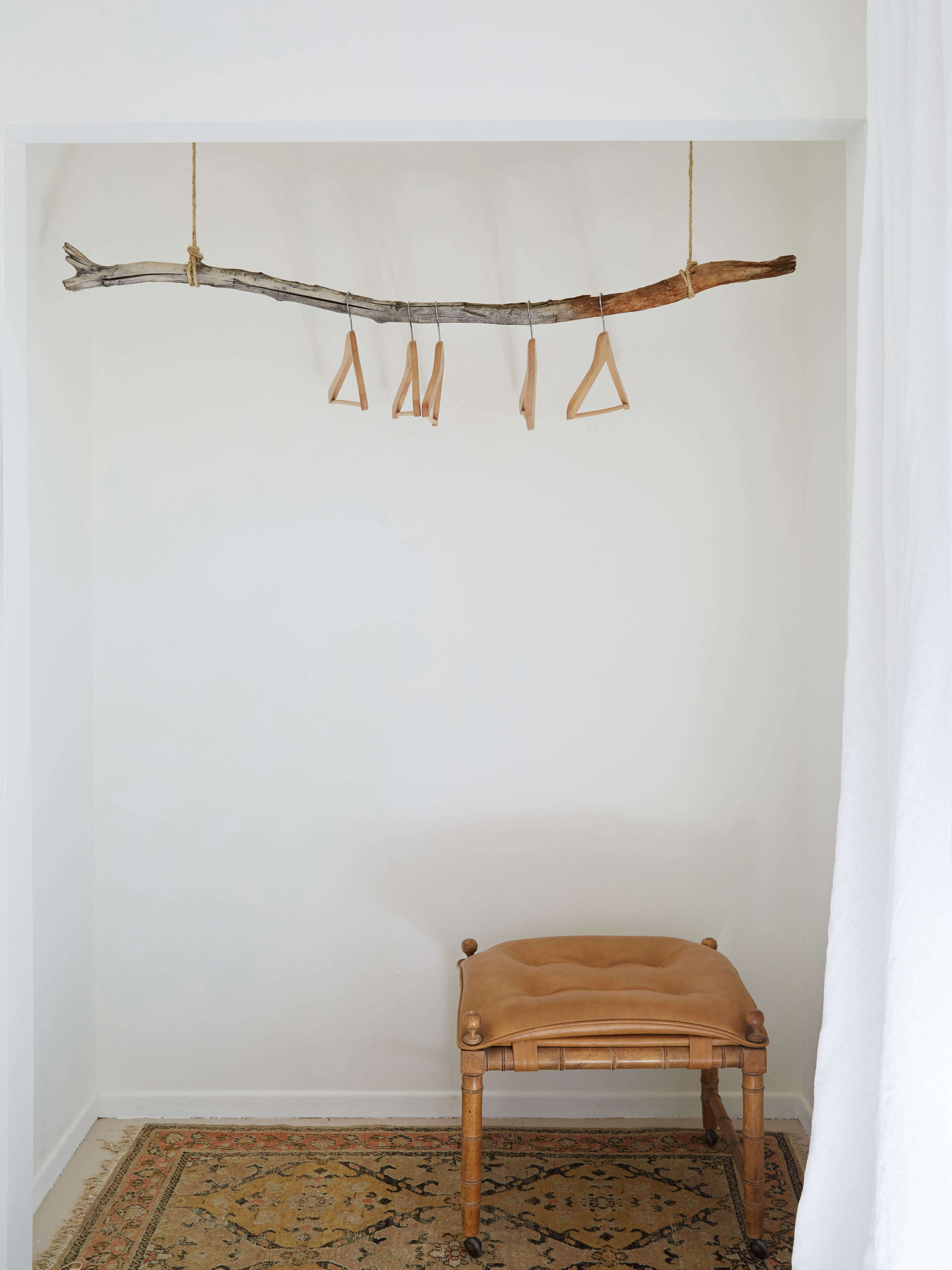 Above: A rope-hung desert branch and vintage stool and rug turn the whitewashed closet—freed of its door—into a dressing area. 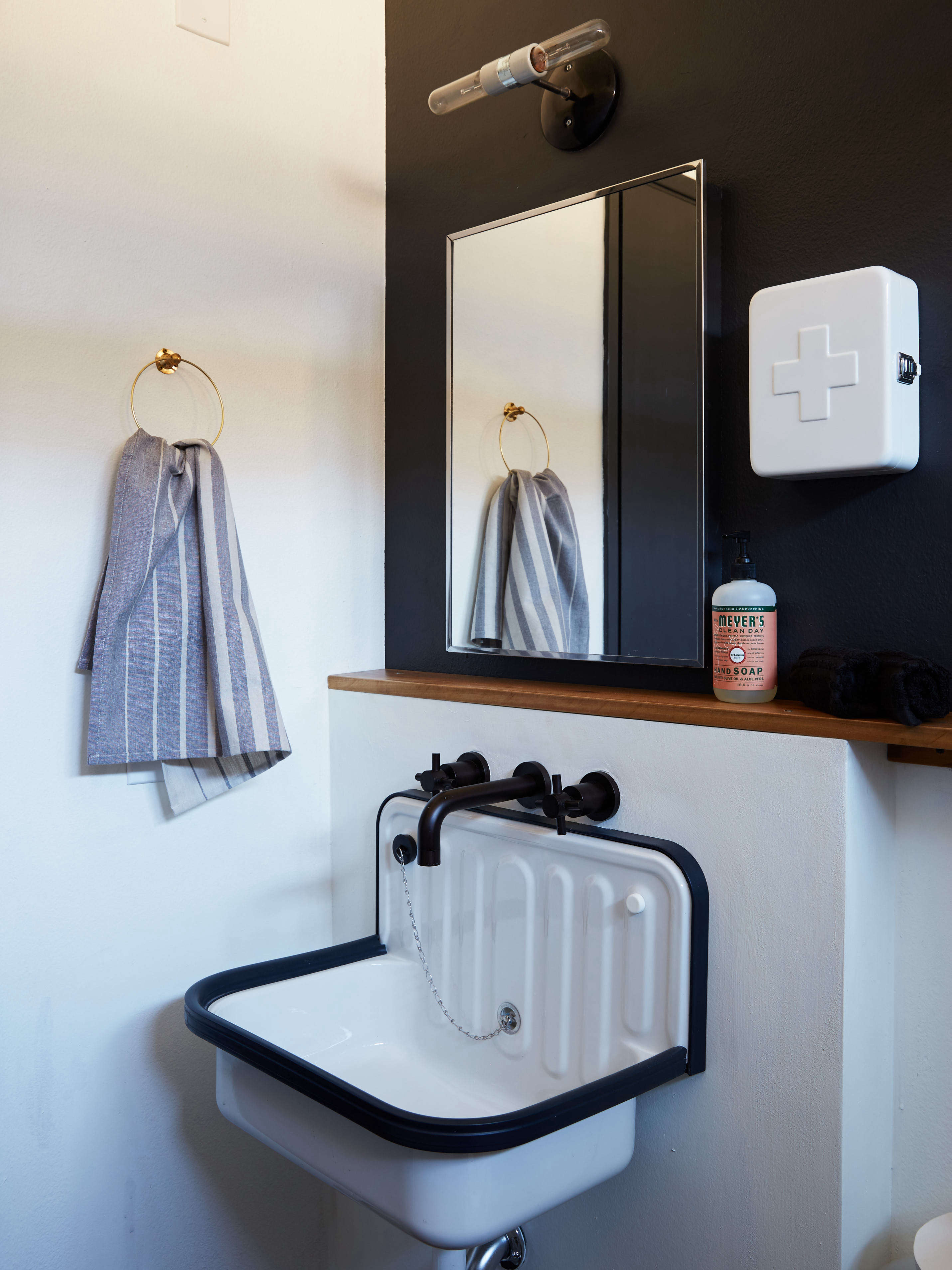 Above: The new bathroom features Alape’s bucket sink from Rejuvenation (we called the trend: See our Design Sleuth). The double-handle, wall-mounted faucet is the Concord by Elements of Design and the First Aid Kit is from Schoolhouse Electric. The Double Wall Sconce, $45, is by Etsy seller Ind Lights. 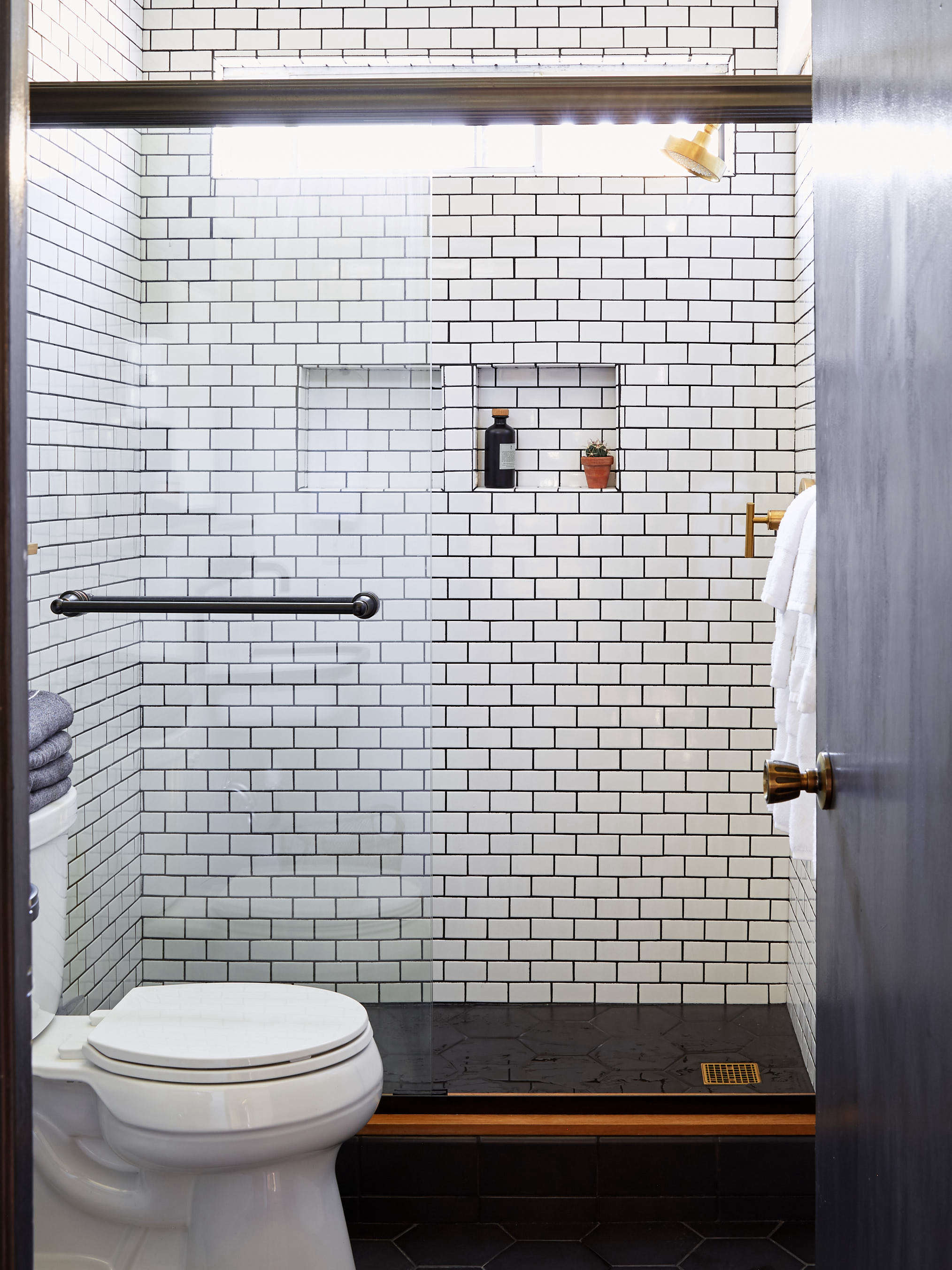 Above: The bathroom, which was by far the most ambitious part of the remodel, has a glass-walled shower lined with two-by-four-inch subway tile set off with dark grout and a floor of black Hexitile. The couple report that there were plenty of mishaps along the way: coordinating orders to arrive when they were in residence was a nightmare, a delivery truck got stuck in the sand, and contractors hired to help with the tiling “stayed late one night, leaving the grout too long, which then turned into many hours of scraping off excess grout” (next go, they plan to do all the tiling themselves). 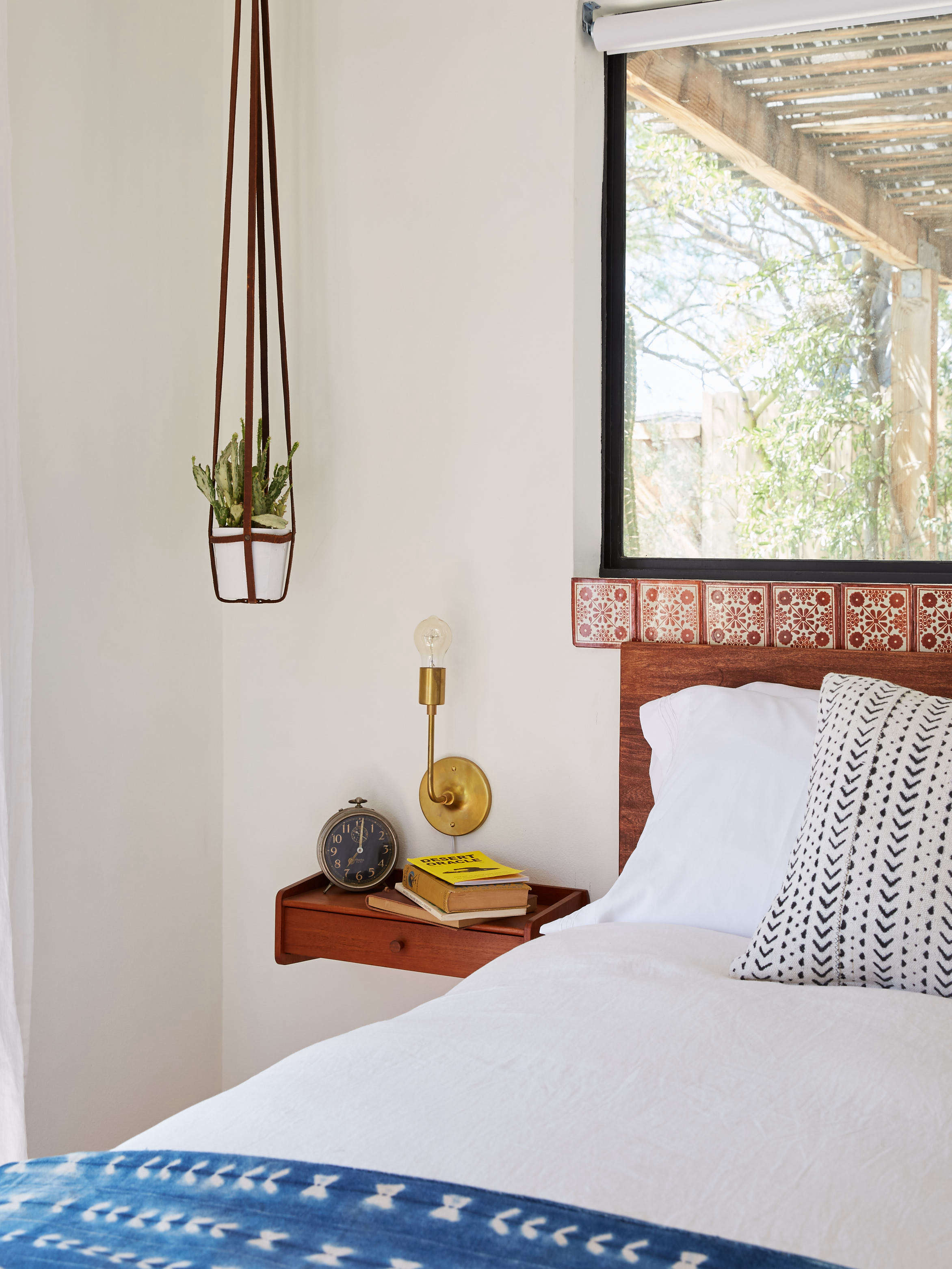 Above: The second bedroom has a tiled window ledge and vintage floating bedside tables. The Brass Sconce is a Schoolhouse Electric design. 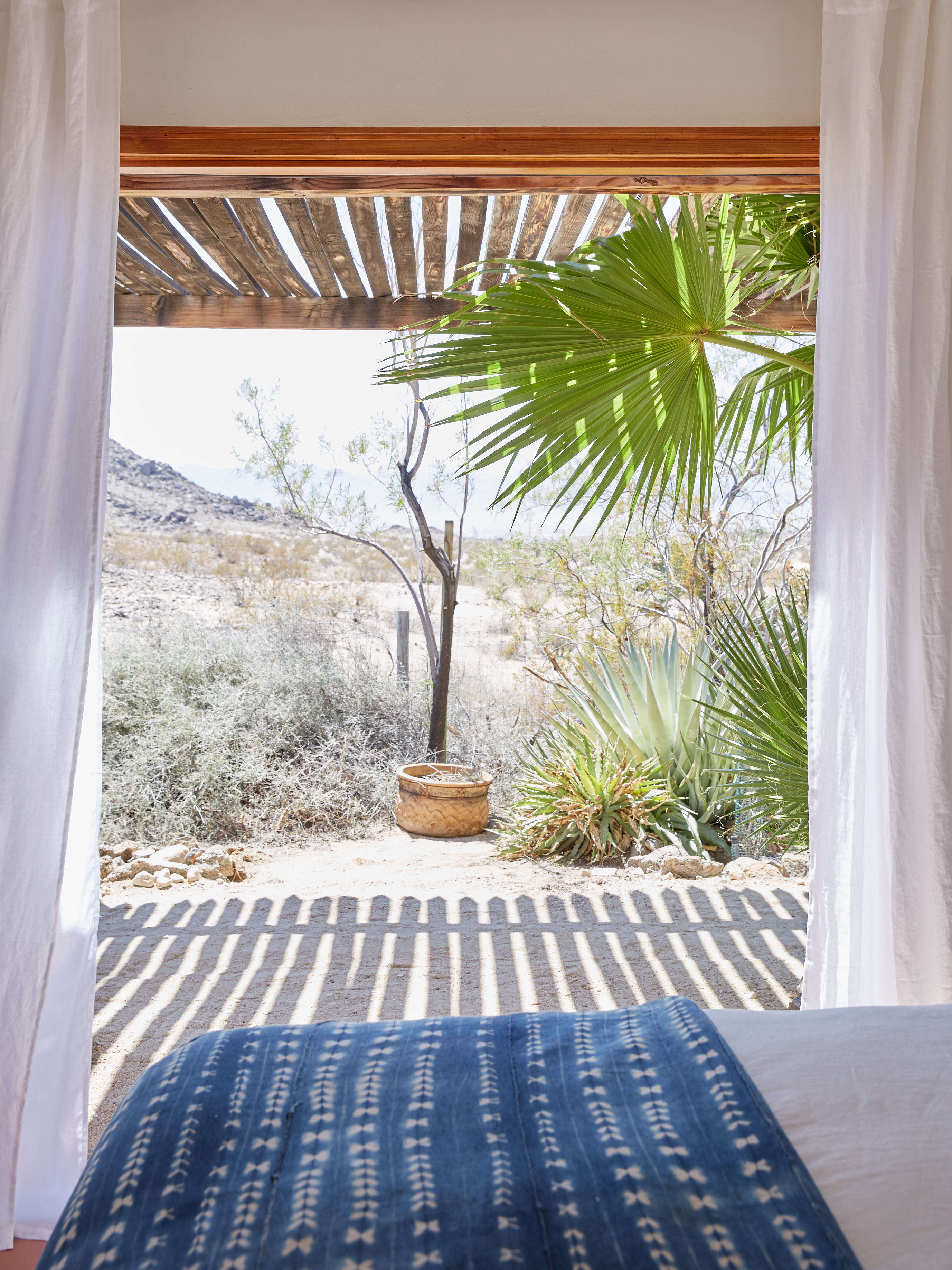 Above: The view from bed. The indigo blanket is from natural dye specialists Apprvl. 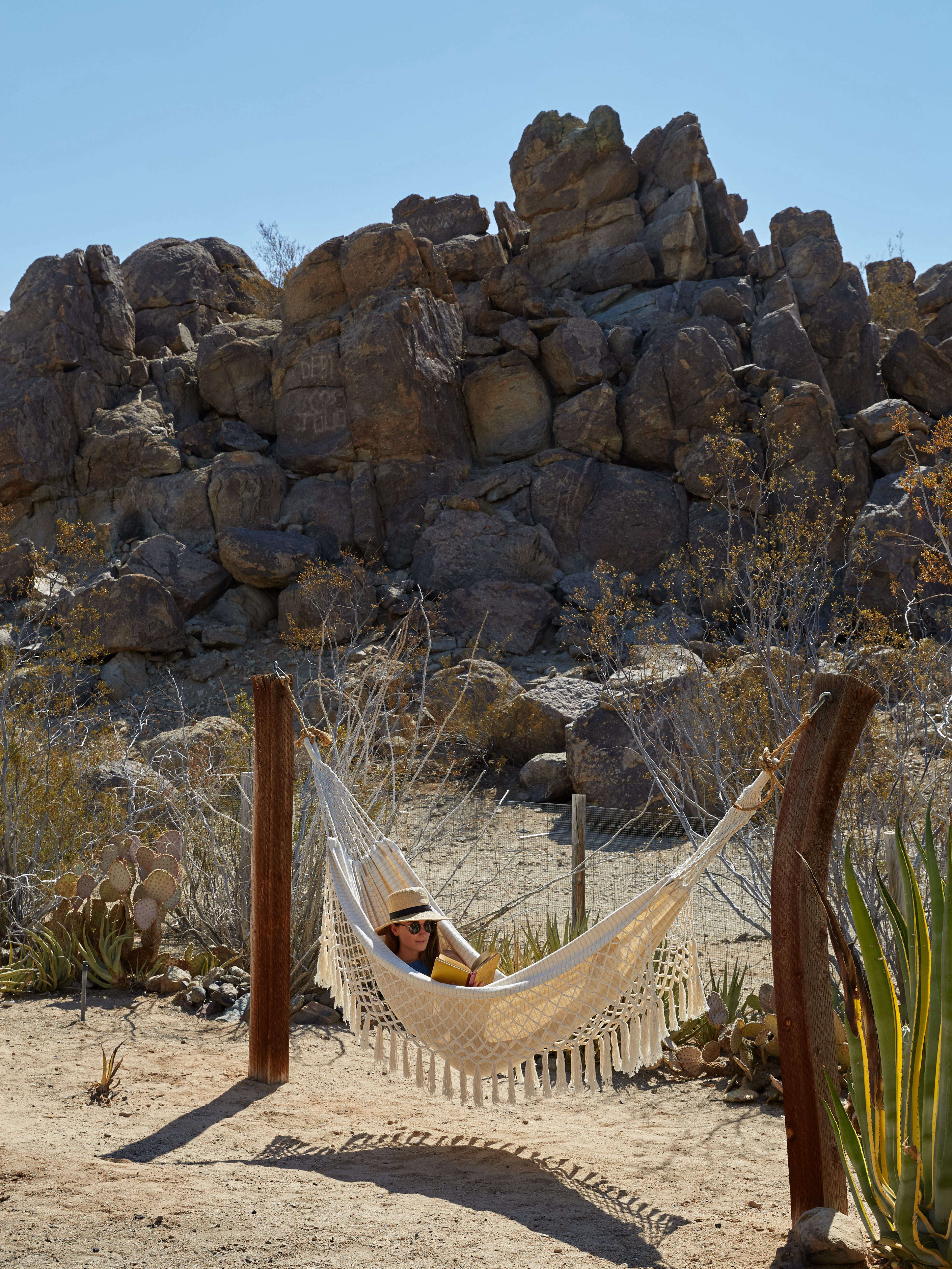 Above: Sara in a fringe hammock in her new backyard. The house sleeps four and rents for $195 a night; go to the Joshua Tree Casita for reservations and to see dramatic Before and After shots.

For more hands-on remodeling projects, take a look at:

$50.00 USD from The Home Depot
Silestone

Hexitile 7 in. x 8 in. Porcelain Field Tile in Matte Black

Terracotta Tiles with a Vintage Vibe from Clé in Sausalito

The DIY Tiny House Made from Hemp: A Community-Built Mobile Home from Common Knowledge in Ireland