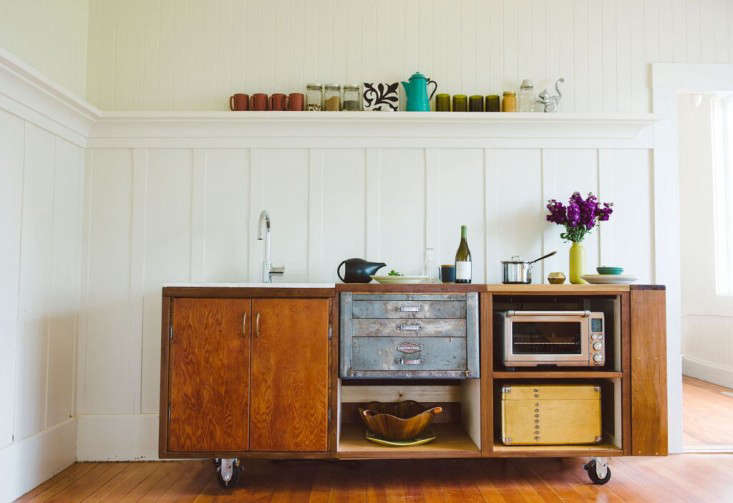 Above: “The drought and housing crisis here in the Bay Area were both on my mind as my husband, Steve Leonard, and I moved from Brooklyn, New York, to our two-unit 1880s fixer-upper cottage in Sausalito, California,” writes Nix in the ModNomad Studio blog.”We wanted to be part of some solutions here in Marin County.” The two moved into the smaller unit, a 550-square-foot studio, and immediately ripped out its “ugly and oversized” kitchen to create a bedroom. After living with a sawhorse-and-plank cooking setup in the main room, Nix learned what’s essential and what’s extraneous. The Go-Go was born out her desire to come up with an adaptable, portable, eco-conscious solution that offers a departure from “the tyranny of the typical built-in kitchen.” 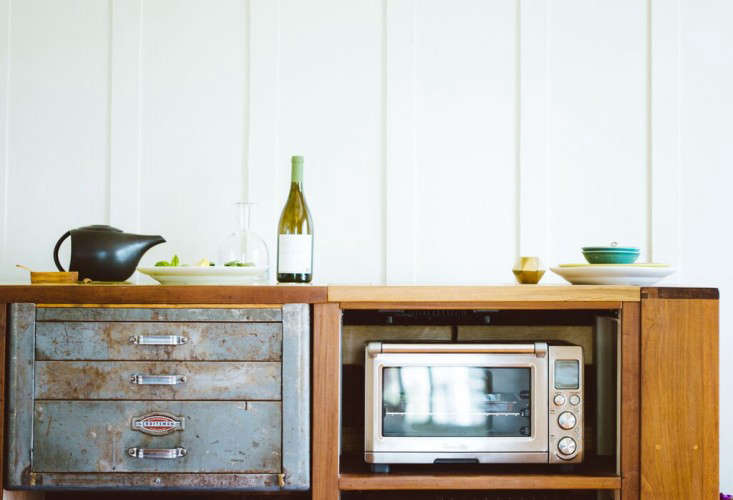 Above: Constructed over the course of two very productive weeks, scavenging for parts included, the Go-Go incorporates a vintage Craftsman steel tool chest, a wardrobe found on Craigslist, salvage yard marble, and leftover plywood, oak, and ipe wood from work done on Nix’s rental house and a friend’s deck. She chose to spend her money on state-of-the-art compact appliances and a new stainless sink for “a meeting of the rustic and the modern.”

Casters, a Jeff Smith signature detail, enable the design to travel. In lieu of a range, the kitchen has a Breville Smart Oven, which toasts, bakes, roasts, and has a time-saving convection option. 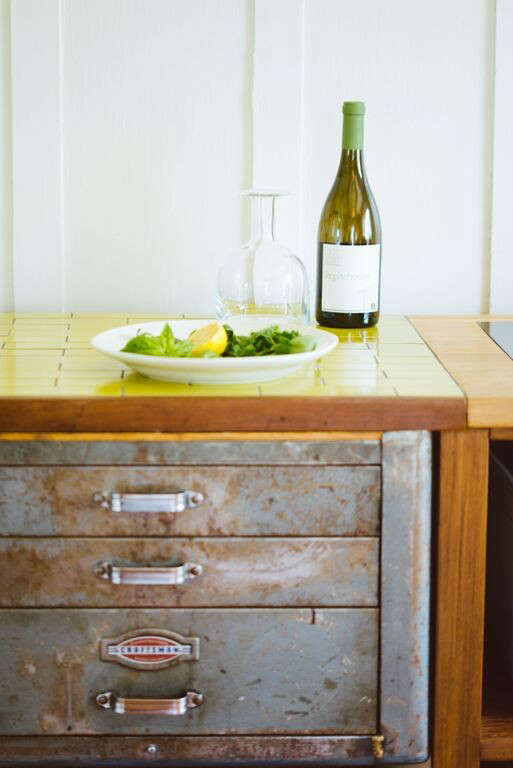 Above: The tool chest holds utensils, flatware, and plates. The counter is topped with Heath Overstock Tiles in chartreuse purchased from the company’s Sausalito factory store. (For more inspiration, read about architect Ian Read’s Budget Remodel with Heath Tile Seconds.) 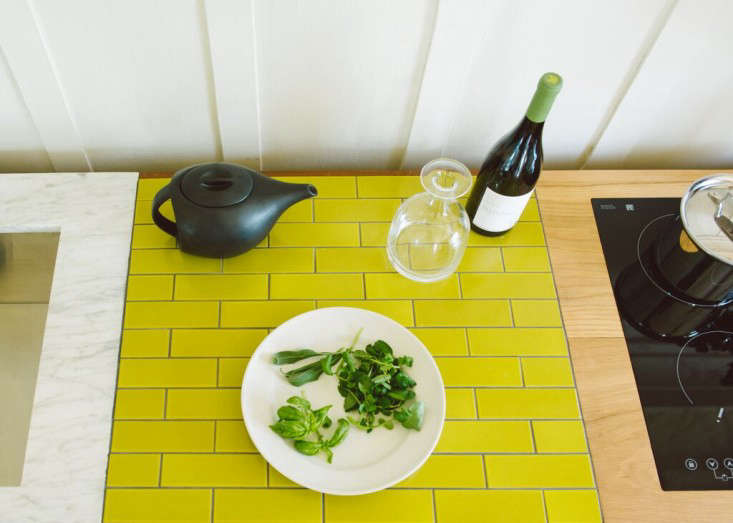 Above: The kitchen is neatly divided into three work areas. Cooking is done on a two-burner Ramblewood Green Induction Cooktop with a built-in fan.

The design, while not intended for catering to a crowd, is adaptable. And as is, Nix points out, it works well for studios, guest houses, garages turned into apartments, and offices. “I hope it can offer people an easier way to get a kitchen installed in some extra space they might want to rent out. And later they can roll the kitchen somewhere else, sell it, or turn it into an outdoor kitchen–so there’s no waste.” 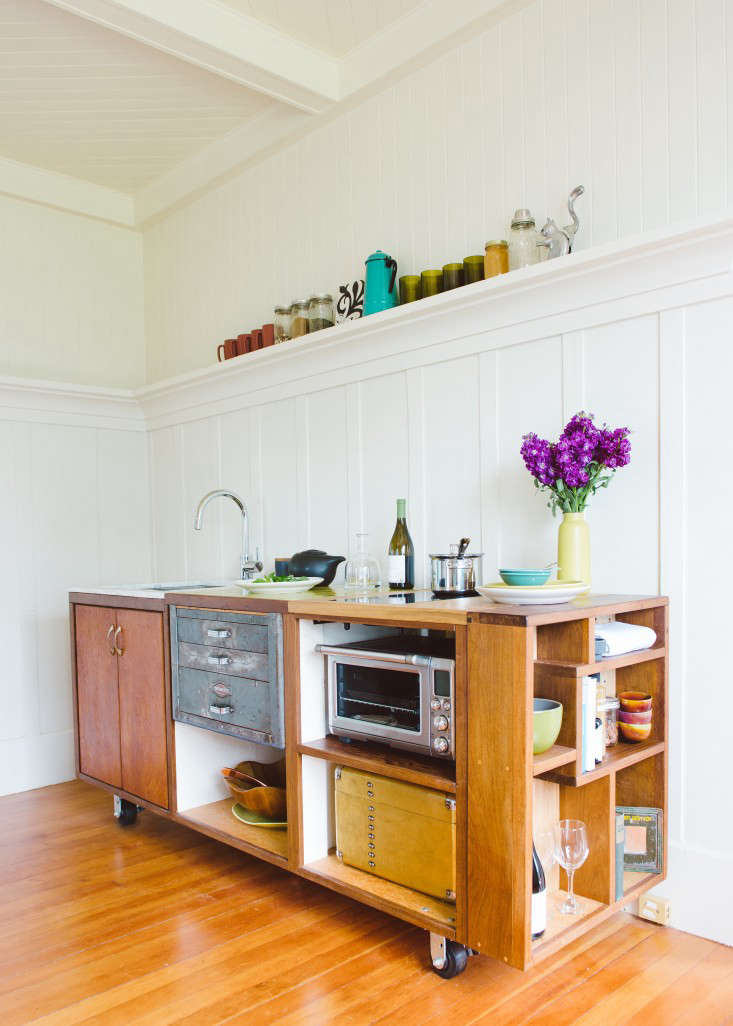 Above: Open storage is incorporated on one end, and a wheeled set of True 24-Inch Under-Counter Refrigerator Drawers (not shown) have since been added to the sink end. The sink is Vigo’s 23-Inch Stainless Steel Single Bowl Undermount with a Grohe faucet (see our High/Low: Dornbracht vs. Grohe Kithen Faucets). A third ModernNomad, Kurt Norstad, hooked up the Go-Go to water and electricity, and collaborated on the design of the gray water system. “We called on the expertise of Laura Allen of Greywater Action and her very thorough book, The Water-Wise Home,” says Nix. “The system includes an actuator and diverter valve that allows me with the flip of a switch to send kitchen water to either the sewer or the garden.”

So far, the kitchen has lived in two different spots in Nix’s living room, and the Sausalito cottage has become ModNomad‘s HQ and live/work studio. Nix and her cohorts are at work on new ways to “bring art, design, and activism together.” Stay tuned for more of their instigations.